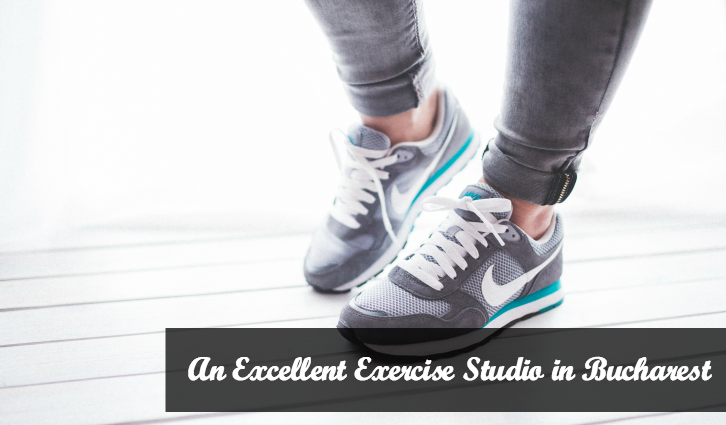 Exercise: An Excellent Studio in Bucharest

Just because you’re traveling or are living abroad, you still have to exercise – and it helps if you find an exercise studio you really like. I found one I love. 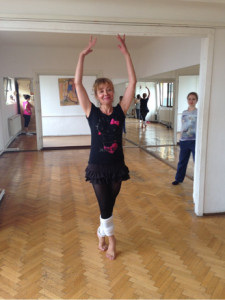 If you’re looking for a great exercise studio in Bucharest, I highly recommend Attitude Concept run by the wonderful Cecilia Dumetrier. She is beautiful, talented, tons of fun – and tough. That’s the best. 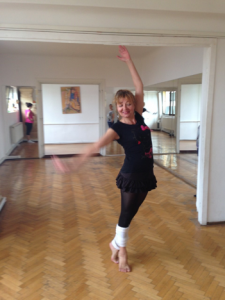 Cécile – as we girls call her – creates such an inviting atmosphere that I actually look forward to going to her studio, three, four, and sometimes even five times a week. Every time it’s something different: mingi mari ‘big balls’, mingi mici ‘small balls’, farfurii ‘plates’, bâte ‘sticks’, and yoga. But it’s all Cécile. Her background is ballet, and she brings the precision and rigor of classical dance to her classroom. 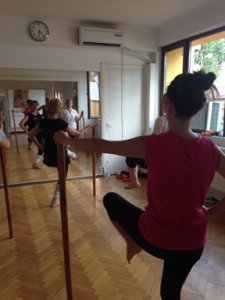 Bâte: we’re doing all sorts of exercises with the sticks.

Oh, and I should mention that Cécile has abs of steel. 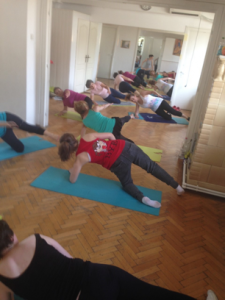 And I had thought I was in shape! Nope. Suddenly I was using muscles I hadn’t used since last being at Cécile’s.

She charges a reasonable 200 lei ($50) for 12 sessions. They are always worth it. Fetele mari, the so-called big girls, of which I am one, come at 6:00. The little ballerinas are at 5:00. I referred a friend’s six-year-old daughter to Cécile, and she loves it as much as I do! 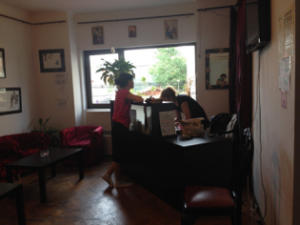 Cécile checking in a student in the office.

The address is Strada Icoanei 65, Sector 2. Here’s the building: 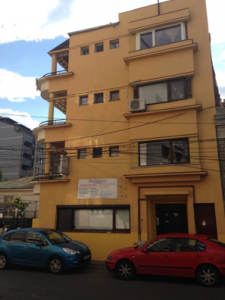 To give you a sense of my full exercise experience at Cécile’s, her studio is a twenty-five minute walk from my apartment on Piaţa Dorobanţi. I usually go down Calea Floreasca and turn left on the busy brawling thoroughfare of Ștefan cel Mare … where I invariably see a group of Roma (gypsies) camped out on a scrap of green space – a different group all the time. 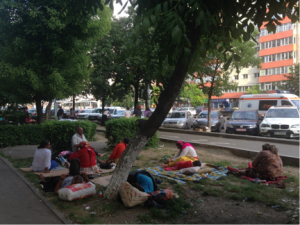 You can see an ambulance on the street. It is likely about to turn right.

Why are they there? Because a big hospital, Spitalul Clinic de Urgență (Emergency Hospital), is around the corner on Floreasca, and if they have a family member in the hospital, they simply spread out their blankets, food and drink, and settle in. I think they’re there day and night until the family member is discharged.

Okay, then. I continue on down the broad boulevard, pass the building that once housed the Securitate (the secret police under Ceauşescu’s regime), which has now been refurbished. It’s now used for the regular police: 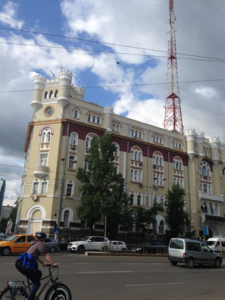 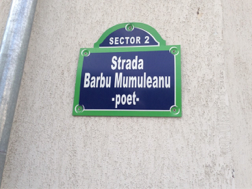 One evening last summer when I was returning home from Cécile’s, a car drove by, a man rolled down his window and asked me if I knew where Barbu Mumuleanu was. So I told him to go straight, turn right on Ghiocei and his next left would be the street. That was fun!

One of the many things to like about Barbu Mumuleanu is that it’s quiet and has little traffic. It also has a wealth of linden trees, which happen to be in bloom now. So it also smells good. 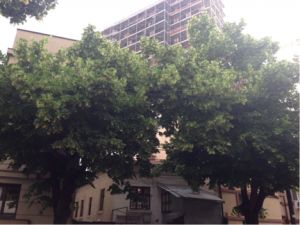 Also on the way is one of my restaurant haunts, Zexe, where I sometimes go with my friend, Delia. 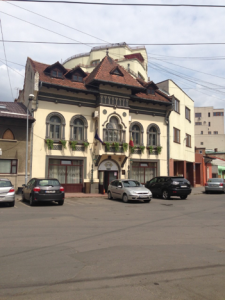 Zexe has a nice indoor/outdoor patio inside.

Then there’s the charming biserica across the street from Cécile: 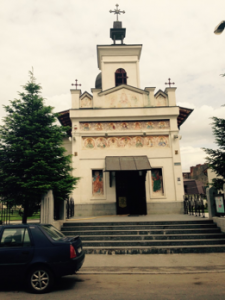 The walk home is always pleasant, because although I’m sweaty, I’m also relaxed. Then, you know, it’s a shower, a glass of wine and more Romanian news, which I can’t seem to get enough of. The latest scandal involves Hexi Pharma – and it’s a doozy. 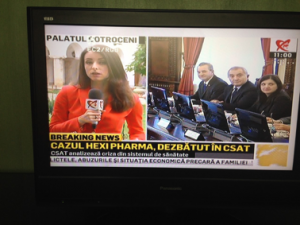 Here’s a link in English, which only gives a suggestion of the magnitude of the scandal.