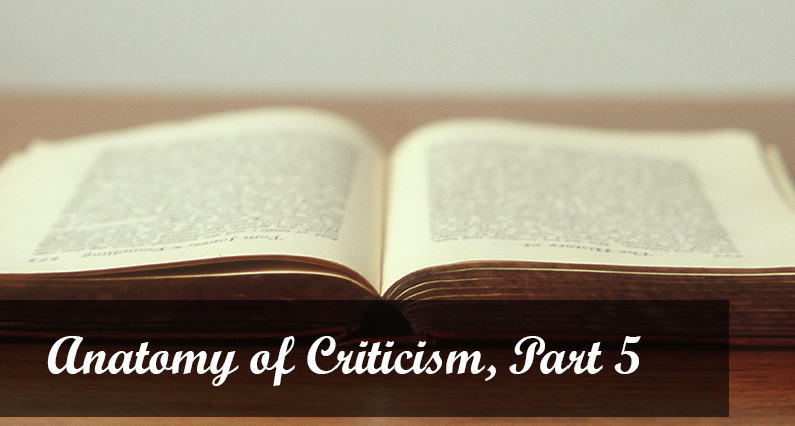 Frye beings with the bare bones of fiction:

“In literary fictions the plot consists of somebody doing something. The somebody, if an individual, is the hero, and the something he does or fails to do is what he can do, or could have done, on the level of the postulates made about him by the author and the consequent expectations of the audience” (33).

The first flesh he adds is emotion, and his first subsection is tragedy:

“The words pity and fear may be taken as referring to the two general directions in which emotion moves, whether toward an object or away from it” (37).

He then proceeds to outline the ways these emotions move through his various tragic fictional modes.

As a romance writer I appreciate Frye’s unabashed emphasis on emotion, the way he takes for granted the emotional center of all fiction. Different modes foreground different emotions.

In this sense, then, the term romance in Frye’s terms is apt in its capture of the mythic dimension of the contemporary romance: “Agon or conflict,” he states, “is the basis or archetypal theme of romance, the radical of romance being a sequence of marvelous adventures” (192).

The “marvelous adventure” in the contemporary romance novel is, obviously, the quest for true love. Unlike its medieval counterpart, the contemporary version is as likely to be portrayed with warts and scars as it is with idealized hearts and flowers.

In this quest sense, then, Frye’s romance mode has deep resonances with contemporary romance novels:

“The quest-romance has analogies to both rituals and dreams…. Translated into dream terms, the quest-romance is the search of the libido or desiring self for a fulfillment that will deliver it from the anxieties of reality but will still contain that reality” (192-193).

Sexuality hovers tantalizingly on the edges (or perhaps in a deep, hidden center) of Frye’s romance mode. In the contemporary romance novel it sometimes takes center stage.

Although, as I’ve said, the contemporary romance novel no longer fully operates within Frye’s notion of the romance mode, neither does it slip entirely out of its mythic grasp. Nor does it want to.

This duality in contemporary romance novels – that they are both continuous with “the romances of old” and sites of engagement with contemporary concerns and non-romance modes – make them difficult for the critic to grasp. They’re simply easier to dismiss or ignore.

Frye is upfront about the fact that he is dealing with works of literary value and merit, great works of arts, all the while declining to make a definitive statement about what might constitute that greatness. He is more interested in providing a framework for understanding that art through his study of the interrelated structural dynamics of Western literature since the Greeks.

Frye selects his examples – many and masterfully done – and makes his case.

In contrast, I have offered very few examples of particular romance novels and have instead been speaking of the lump “the contemporary romance novel.”

Although I have no desire nor need to rescue the entire lump, I have felt it necessary to refer to the whole in case there is a great romancer among us so that she “should not be left on the sidelines of prose fiction,” as Frye has said, “because the critic has not learned to take the romance form seriously” (305).

Nevertheless I feel prey to the phrase “the contemporary romance novel” because my first guess is that the contemporary label romance arose as a marketing convenience, post 1972, when publishers discovered the great profitability of a certain kind of narrative and booksellers could designate a section in the bookstore where they were easily found.

And thus began the simultaneous differentiation into what are now called genres: detective, westerns, fantasy, science fiction, and romance.

Of all the genre names only the label romance precedes the twentieth century, with its tug of old-fashionedness.

Of all the genres romance is the most vilified, and it’s label is to be escaped, if possible.

A case in point would be Zane Grey’s Riders of the Purple Sage (1912), which is now taken as a classic western. By Frye’s criteria, its plot, religious theme, and idyllic ending operate solidly in the romantic mode.

By the way, Frye deals handily with the detective story as a facet of literature in an ironic age (see his discussion pp. 46-47).

I would love a contemporary Frye to help me make sense of the literary developments that have come in the wake of 1957.

For more writing advice, visit my complete guide on how to write a book.