This fanciful blog was inspired by my first time-slip novel The Blue Hour (affiliate) . The story  features Jeanne and Victor, two star-crossed lovers in 19th-century Paris, whose karmic fall-out is affecting the lives of their 20th-century reincarnations, Alexandra and Val.

In the 19th century Jeanne had an admirer, Pierre, the owner of the café La Mazurka. He closely followed the progress of Jeanne and Victor’s affair.

Spoiler alert: in Part III of The Blue Hour Victor leaves Jeanne for another woman, and Pierre is there to pick up the pieces. 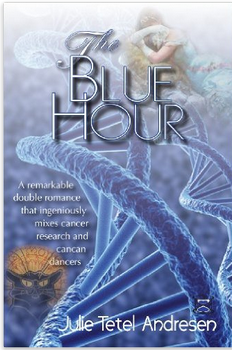 The following scene does not occur in The Blue Hour, but it could have.

Pierre stood at his favorite place behind the zinc, wiping glasses, chatting with customers, making change and endless cups of coffee.

Standing here he had a view of the whole. He cast a benevolent eye on his regulars who lounged here and there, drowsing over their glasses of cognac.

His spot faced the door, so he could welcome in all newcomers. That door opened onto a corner formed by the haphazard intersection of three streets, and his café easily drew chance passers-by from all directions. Rival café owners coveted the location of La Mazurka.

But this spot wasn’t his favorite because of the good custom he could see coming his way. No, it was because one of the streets at this intersection was the one Jeanne lived on. From where he stood he often caught sight of her as she went about her day. Those moments were always the highlights of his.

The gossip in the neighborhood had it that Jeanne had taken to her rooms. No one had seen her for quite a few days now.

Some said she was sick.

Others speculated (discreetly! Jeanne was well-liked) that she had run off with the man rumored to be her lover. A Count, no less. But the liaison was only a rumor, the wagging tongues would hasten to add.

Pierre knew the truth of the rumor of her lover. He wasn’t sure of the reason why he hadn’t seen Jeanne these past days. He had his suspicions, however, and he had made his plan. He believed his strength was in his patience. And in his love for Jeanne.

The moment came he’d been waiting for. He glimpsed her across the street, hurrying around the corner. He was sure it was her, despite the shawl she wore over her shoulders and hair. He knew her naturally graceful movements. His heart beat in anticipation. In fear. In hope.

Dropped his cloth on the zinc. Took off his apron. Left the café with as much calm as possible, not wishing to rouse the suspicion of his customers.

Sprinted across the street to the opposing sidewalk. Caught the arm of the hurrying woman.

“Jeanne,” he said, turning her to face him.

His heart jumped to his throat. He had never seen her looking lovelier. Nor more bereft. He knew what had happened. He could kill the Count for using her so mercilessly, then leaving her. He was thrilled she was no longer in his toils. 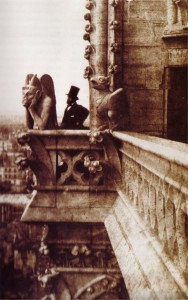 “Are you free at the moment?” he asked, his question heavy with implication.

The slightest spasm of pain crossed her features. She paused a moment to gain control of herself. “Yes,” she said in a calm voice, “I’m free,” adding with a slight choke, “Quite free.”

He took the plunge. “The man who delivers my beer has a brother who cleans Notre Dame.”

She blinked. “The cathedral?”

“Yes. Have you ever been there?”

She shook her head.

“His brother knows a cleric there who can perform marriages,” he plunged on. Then in a rush, “Will you marry me, Jeanne?”

Surprise momentarily conquered the anguish he read in her face. Her mouth fell open. Almost as if she did not know what she was saying, she uttered a soft, “Yes.”

He took her hands in his. His lowered his eyes out of respect. He put all of his love into the grip he had on her fingers.

He spied a glint of metal in the gutter. Carried away with the joy he felt at the prospect of Jeanne becoming his wife, he bent down and picked up the small object.

It was a pretty little padlock with the key in the lock. An inspired idea visited him.

“Let’s go to Notre Dame and get married this afternoon,” he said. “And then we’ll go to the little bridge behind the cathedral and put this lock somewhere on it as a symbol of our union. No one will ever know. It will be our secret.”

At his whimsy Jeanne smile became a bit brighter. His happiness grew to think he had lightened her grief.

“It’s a charming idea, Pierre,” she said. She nodded. “It will be our secret.”

The Blue Hour is the first of my time-slip novels. 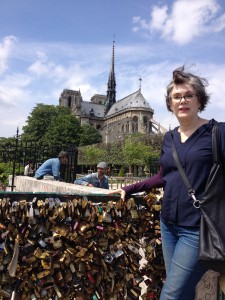 Here I am at the bridge in May 2015, 130 years after Pierre and Jeanne placed the first lock. The site has now become famous as the place where lovers lock their love in literal fashion onto the bridge.

See also: All My Travel Blogs