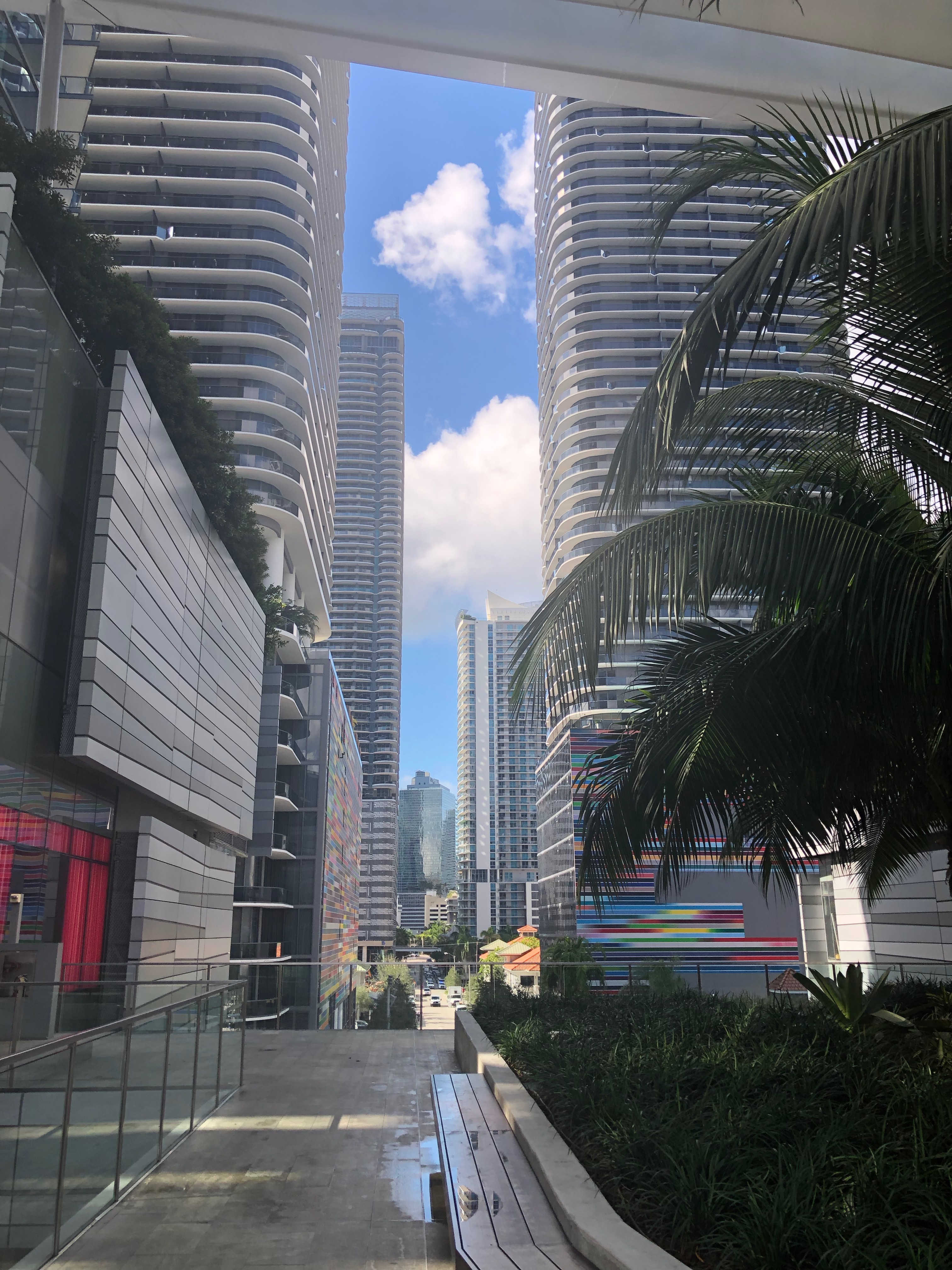 My first week of teaching at Florida International University just ended. Now to explore my Miami neighborhood: Brickell. I chose to hang out here for a couple of weeks. You know, fancy Miami. While I find a more permanent place to live for the semester.

I had expected a more neighborhood-y vibe. Instead, it’s all glass-and-steel high-rises. A gleaming urban mountain range. With palm trees. The title image offers a glimpse down one of the canyons I caught from Brickell City Centre, a luxurious shopping mall.

And speaking of that mall, I wandered around inside … 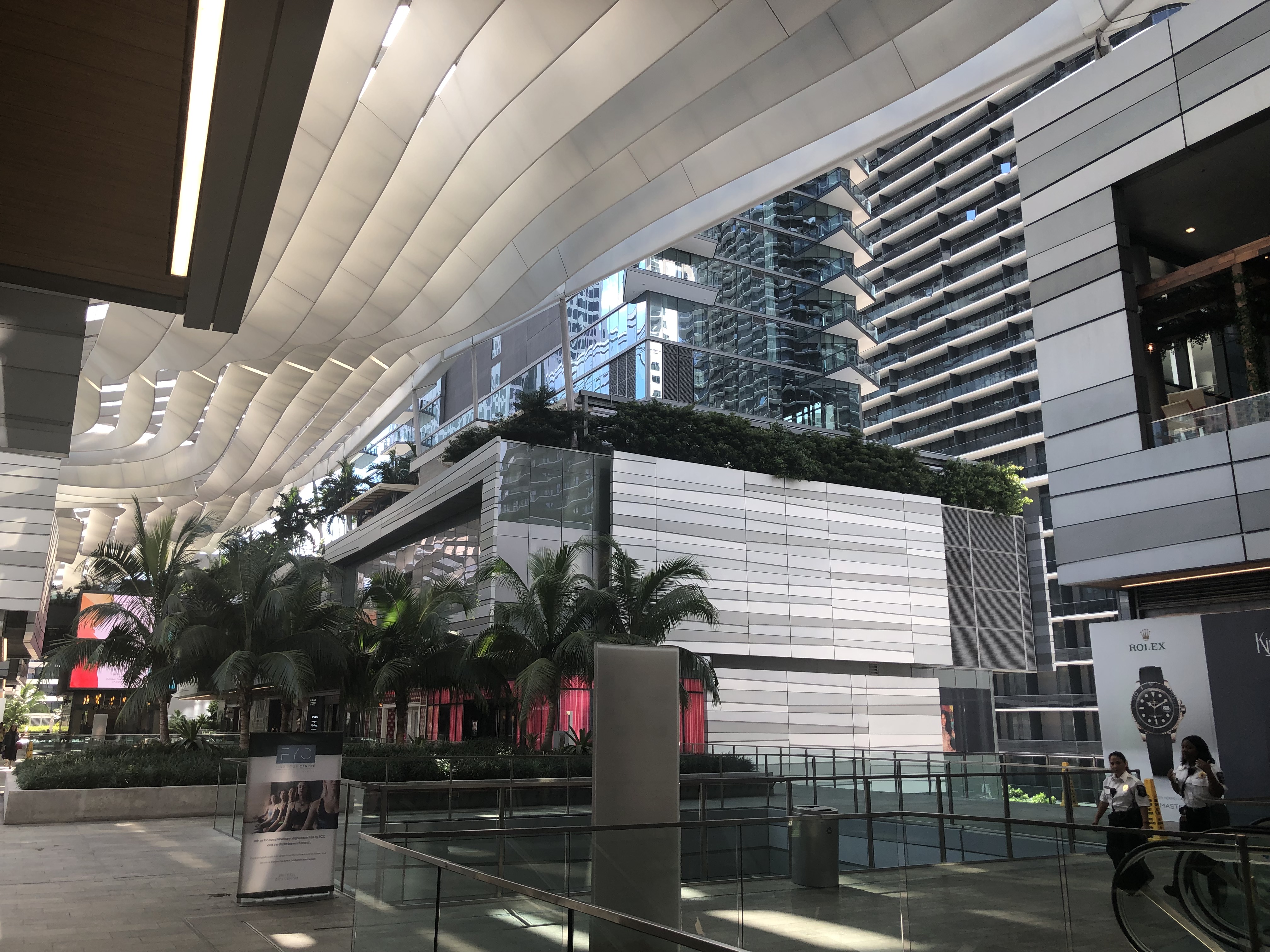 … and wondered : Where am I? Singapore?

I visited Singapore in May and experienced Lush Urban Luxury. Below is a shot of a shopping concourse at the entrance to the G. W. Marriott building, Singapore. Open-air, lots of vegetation, and a sculpturous ceiling undulating overhead. 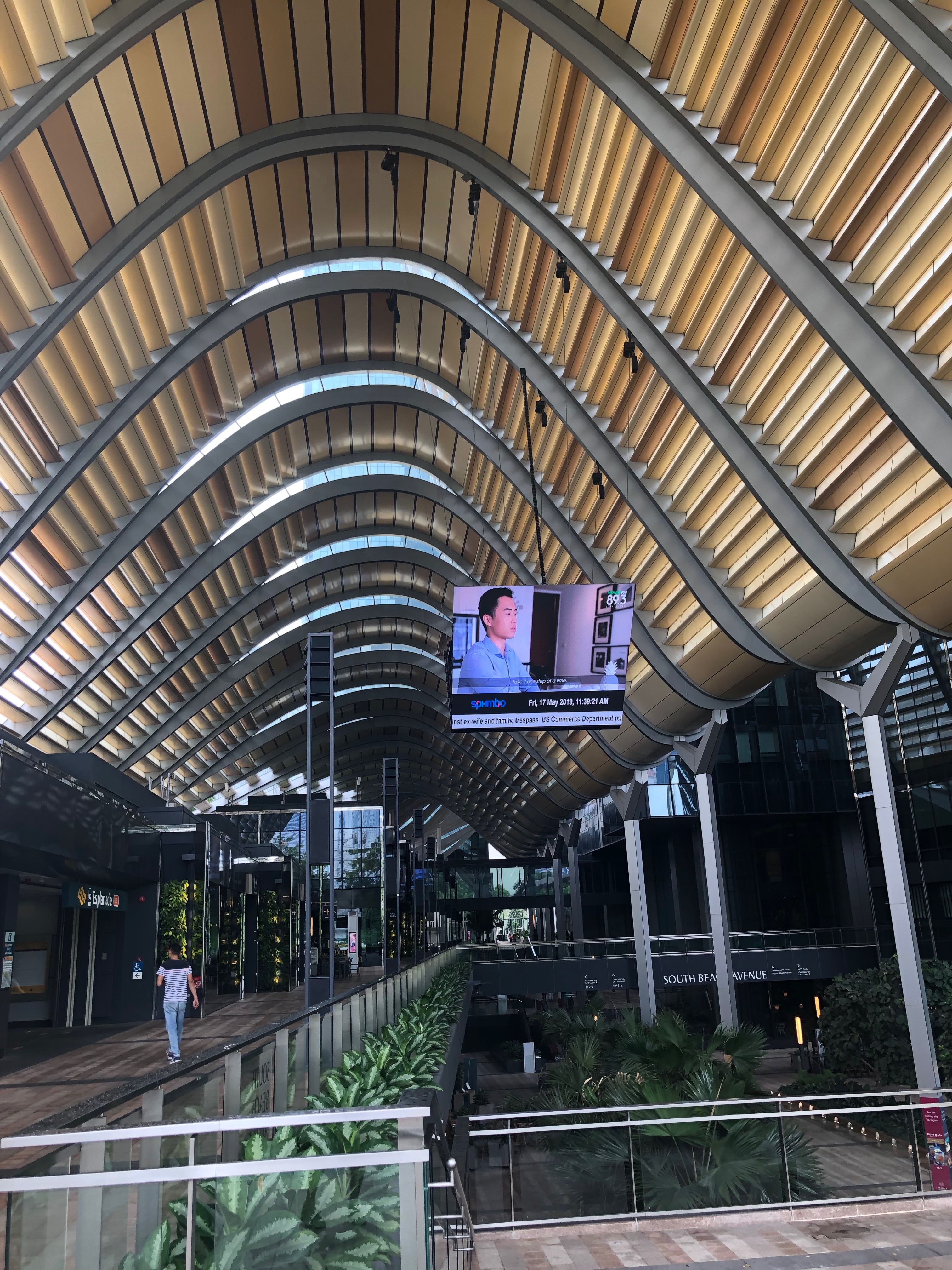 I see from the TV screen that I there on Friday, May 17

Jumbotrons are now apparently features of posh malls. Here’s the one at the Brickell mall: 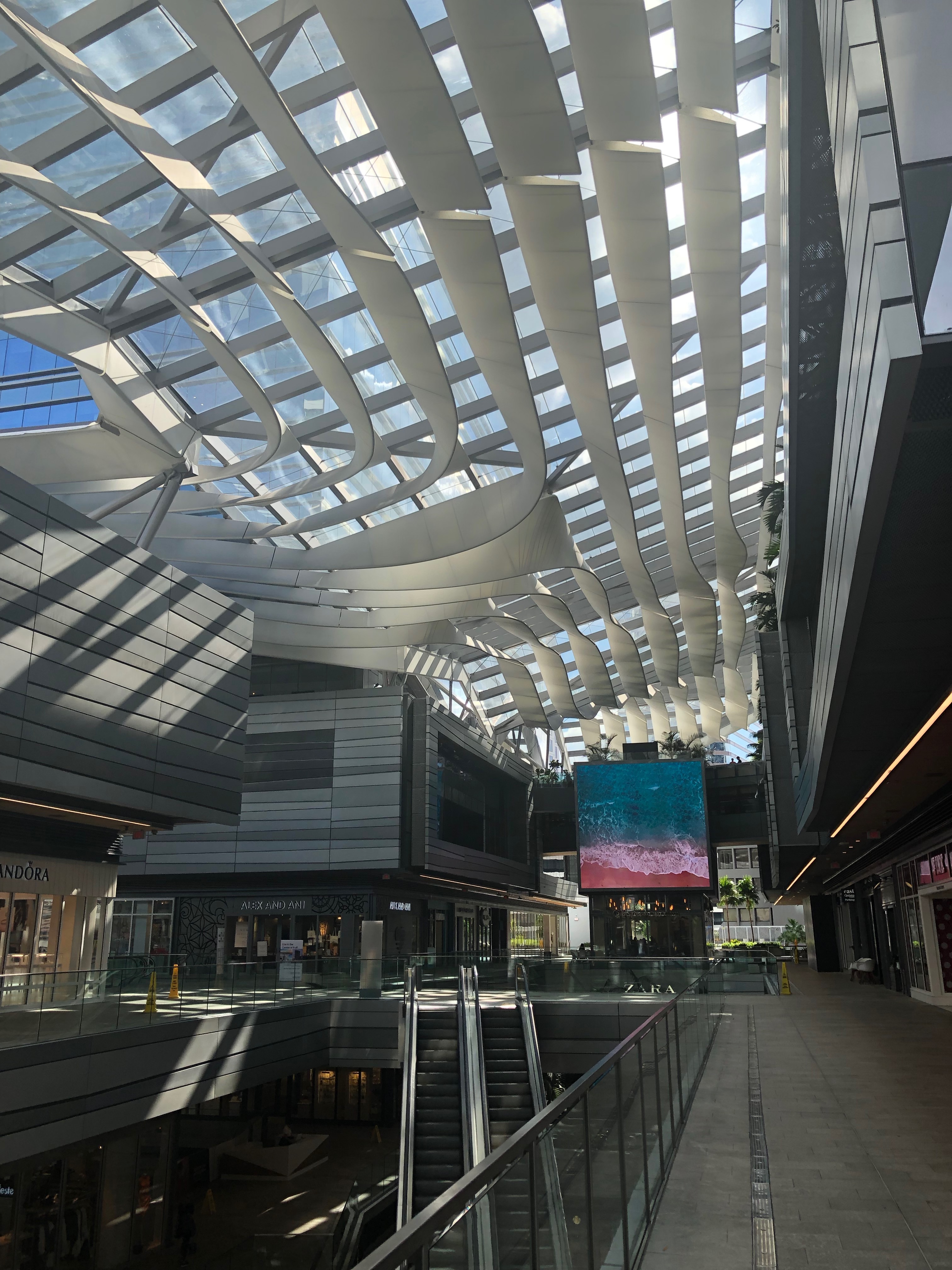 Perhaps if I had visited Miami before Singapore, I would have had the reverse impression in Singapore: Where am I? Brickell?

The Brickell mall also has a koi pond: 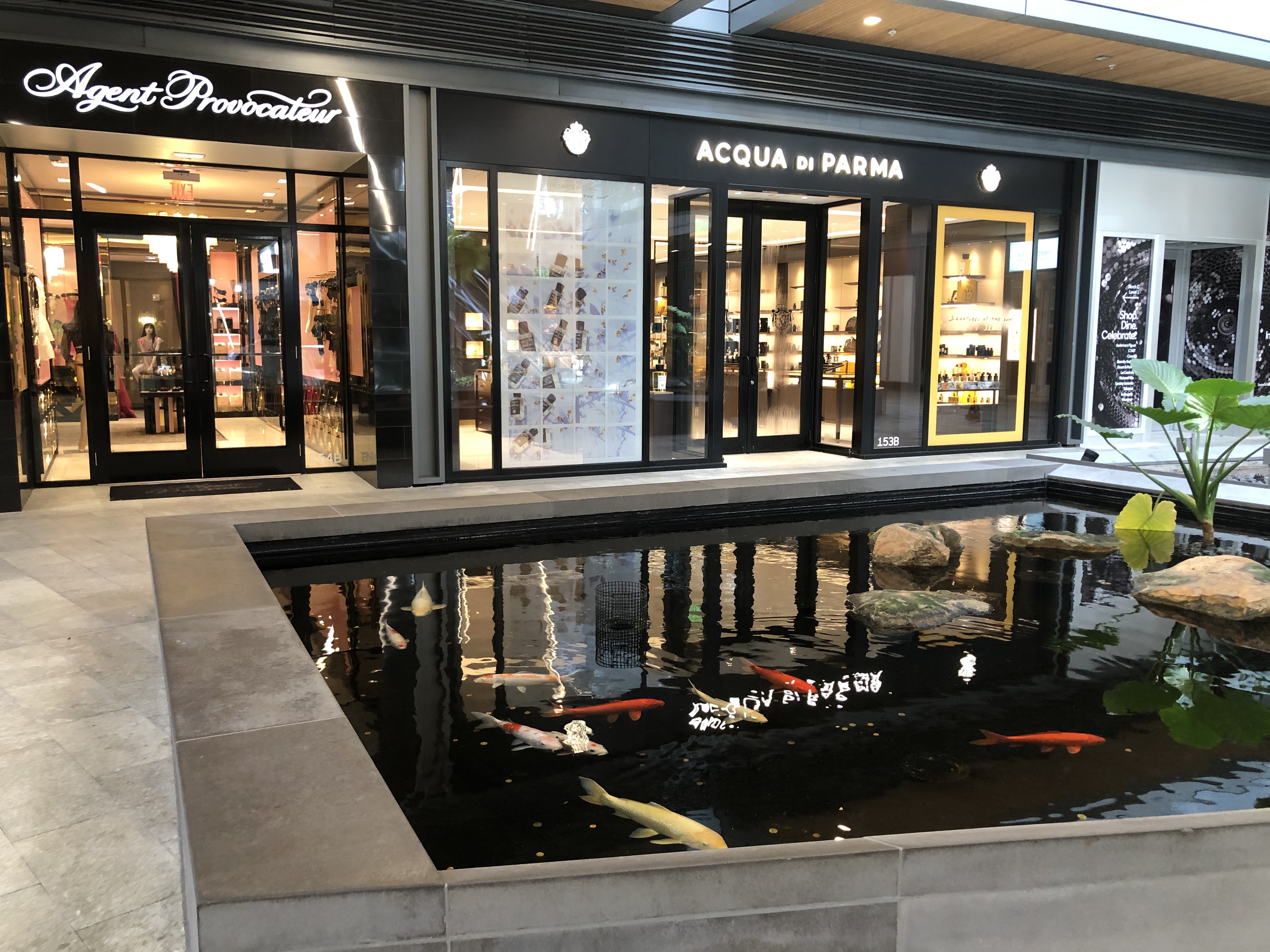 Hey, Singapore, can you top this? (Probably.)

Now I know what the international intersection of Money + Tropics looks like.

More cruising in the neighborhood. I was still on the hunt for a cozy nook, like a breakfast joint I could frequent. The best I came up with was this: 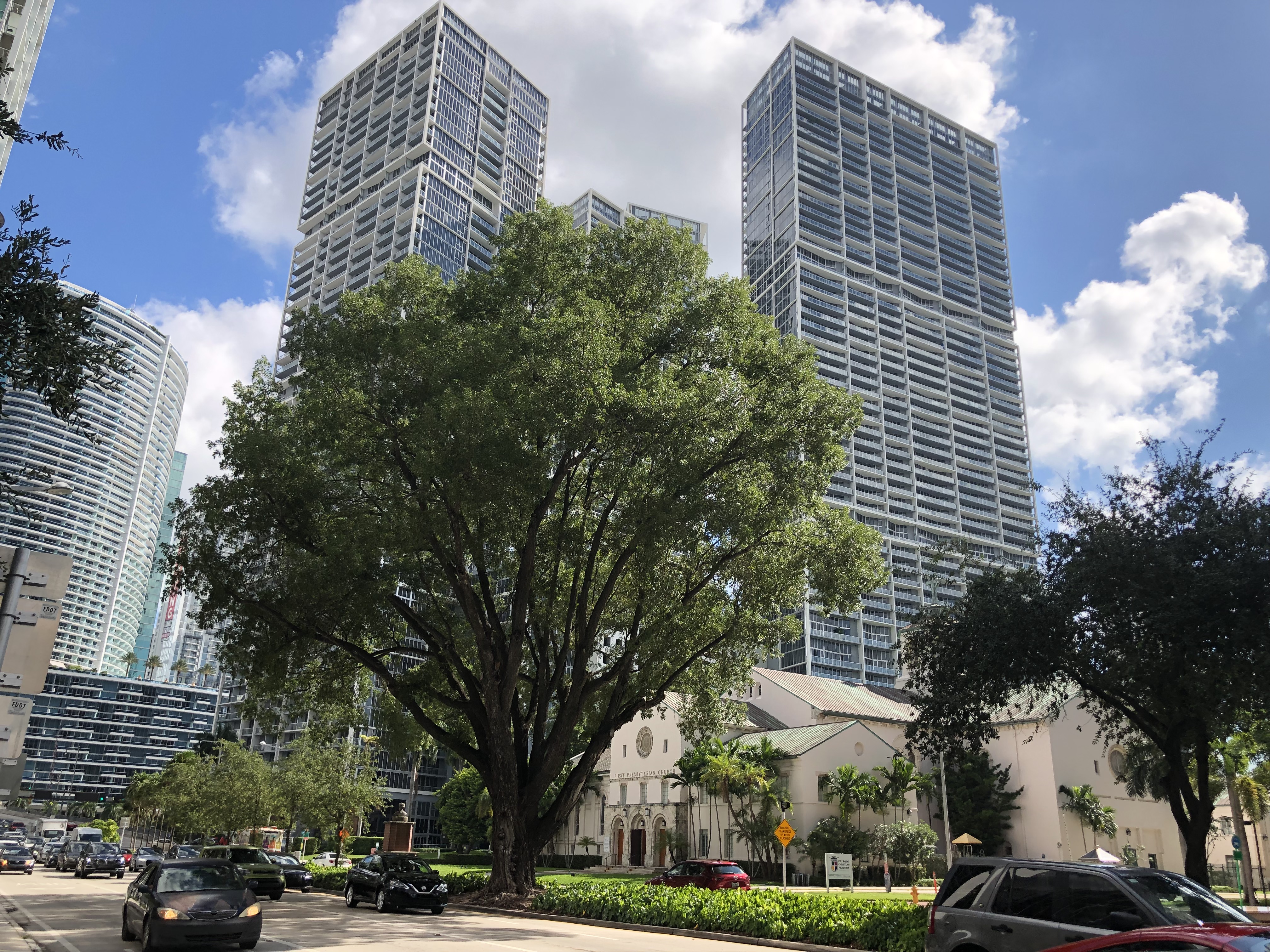 No inviting diner. Instead, a church, one of the few low-to-the-ground structures I encountered. The air above is just too valuable.

And next door a typical Florida esplanade: 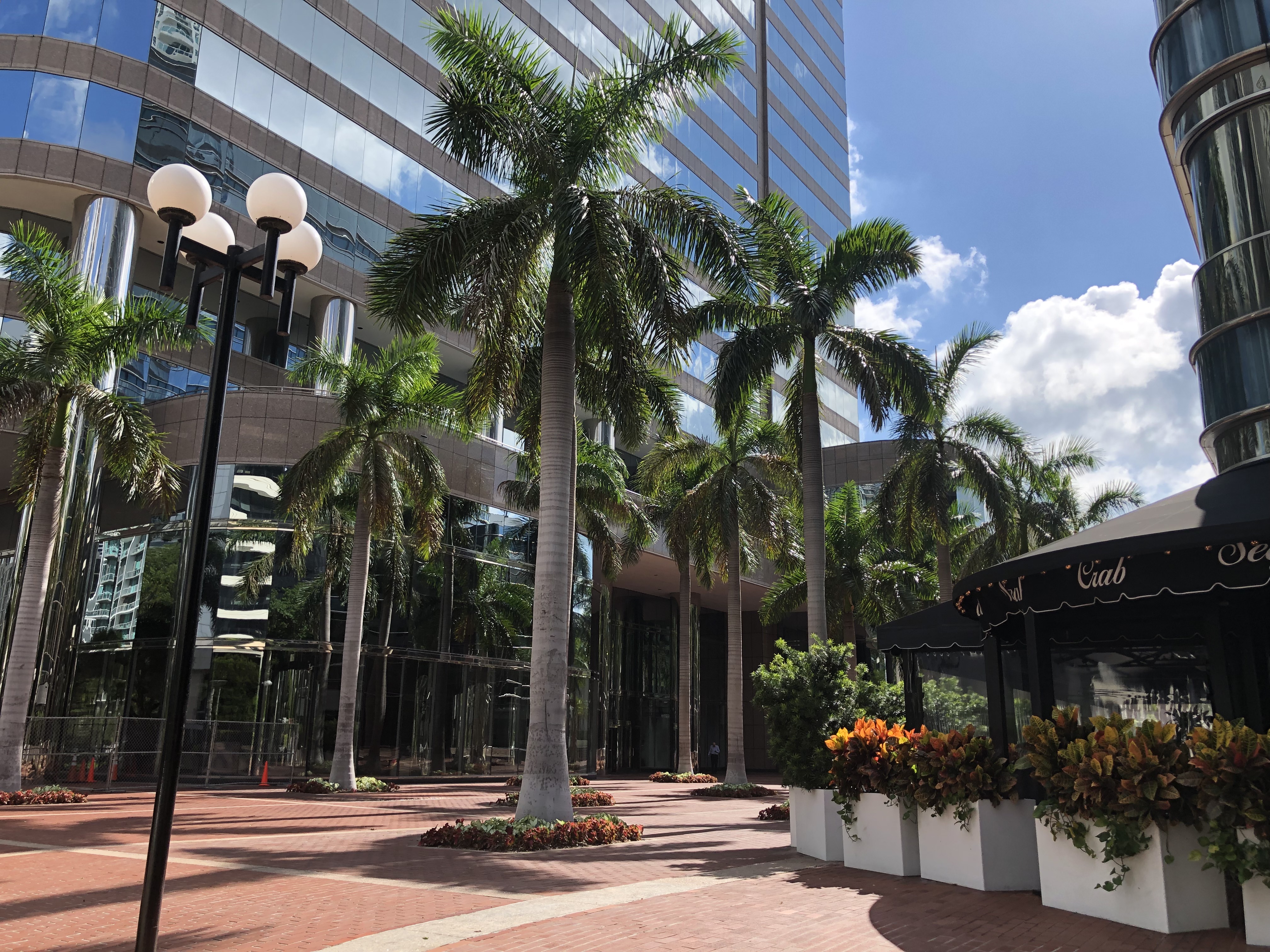 I went on down to the waterfront, Brickell Bay. It’s formed by an inlet created by Brickell Key (island) in the Atlantic. 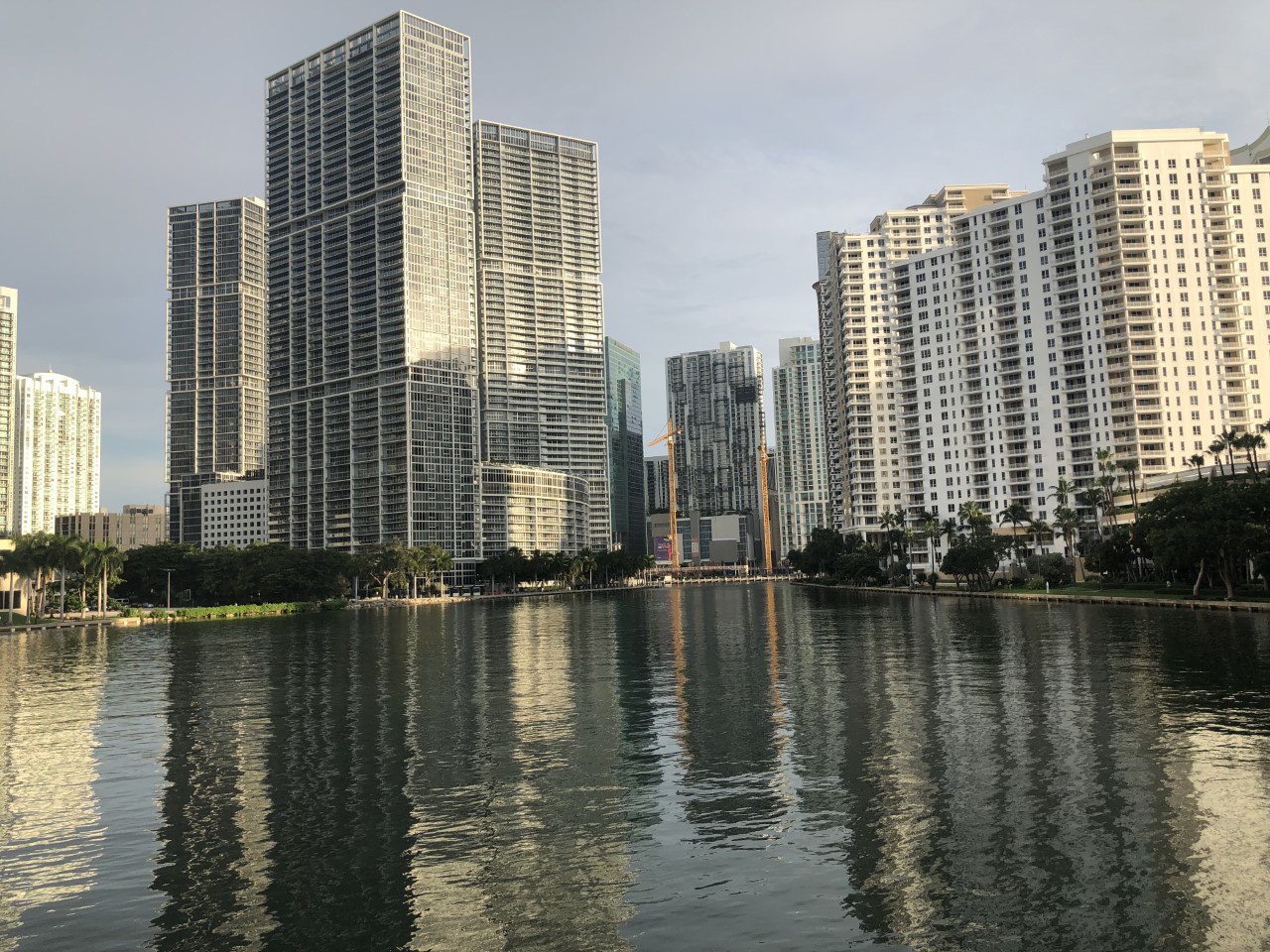 Once again I was struck by the similarity with Marina Bay, Singapore: 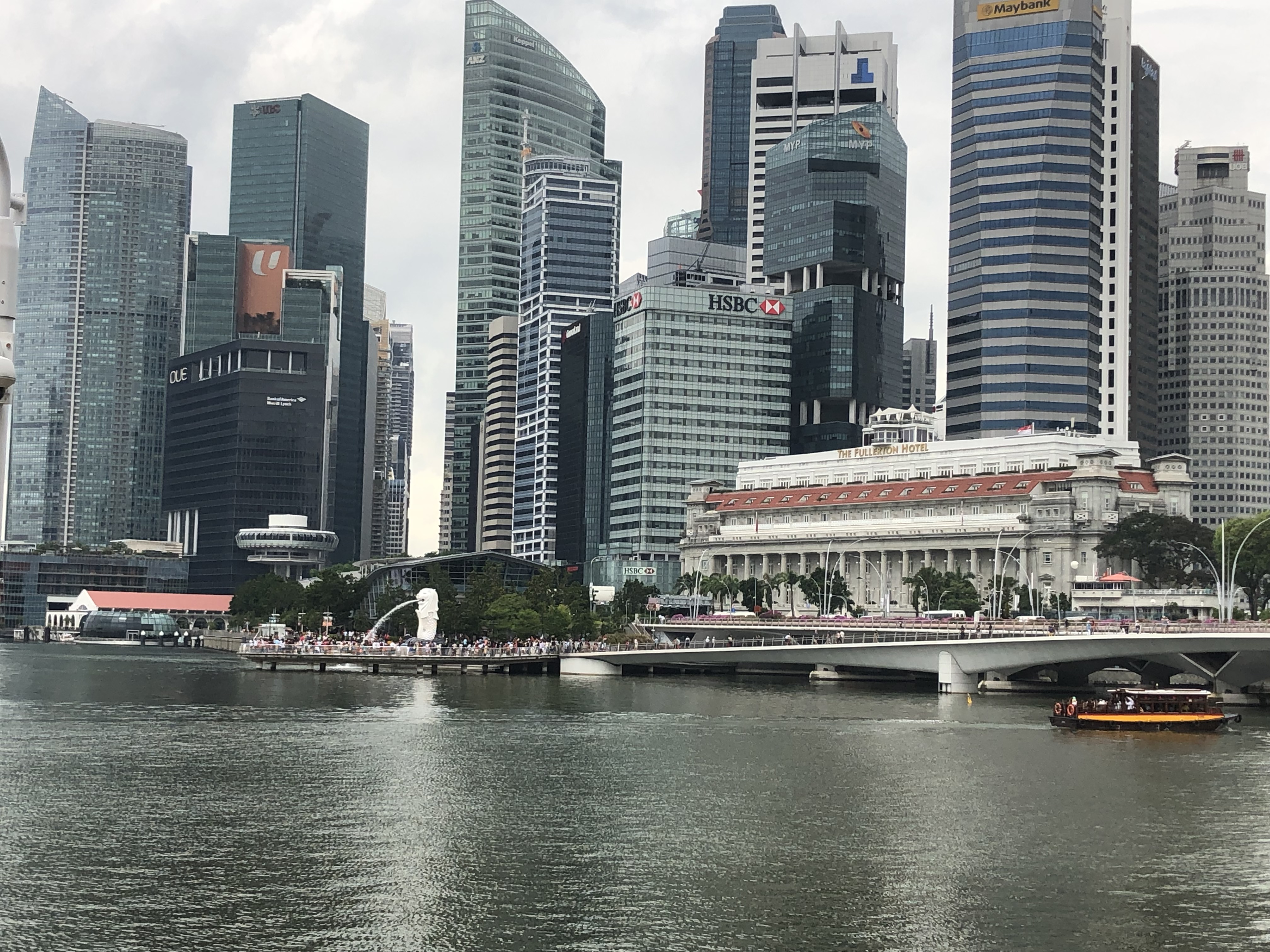 Now I’ll add to the equation: Money + Tropics + Water = Singapore and Brickell (and Hong Kong and any other rich waterfront city)

Back to Brickell with a more tropical view of the bay: 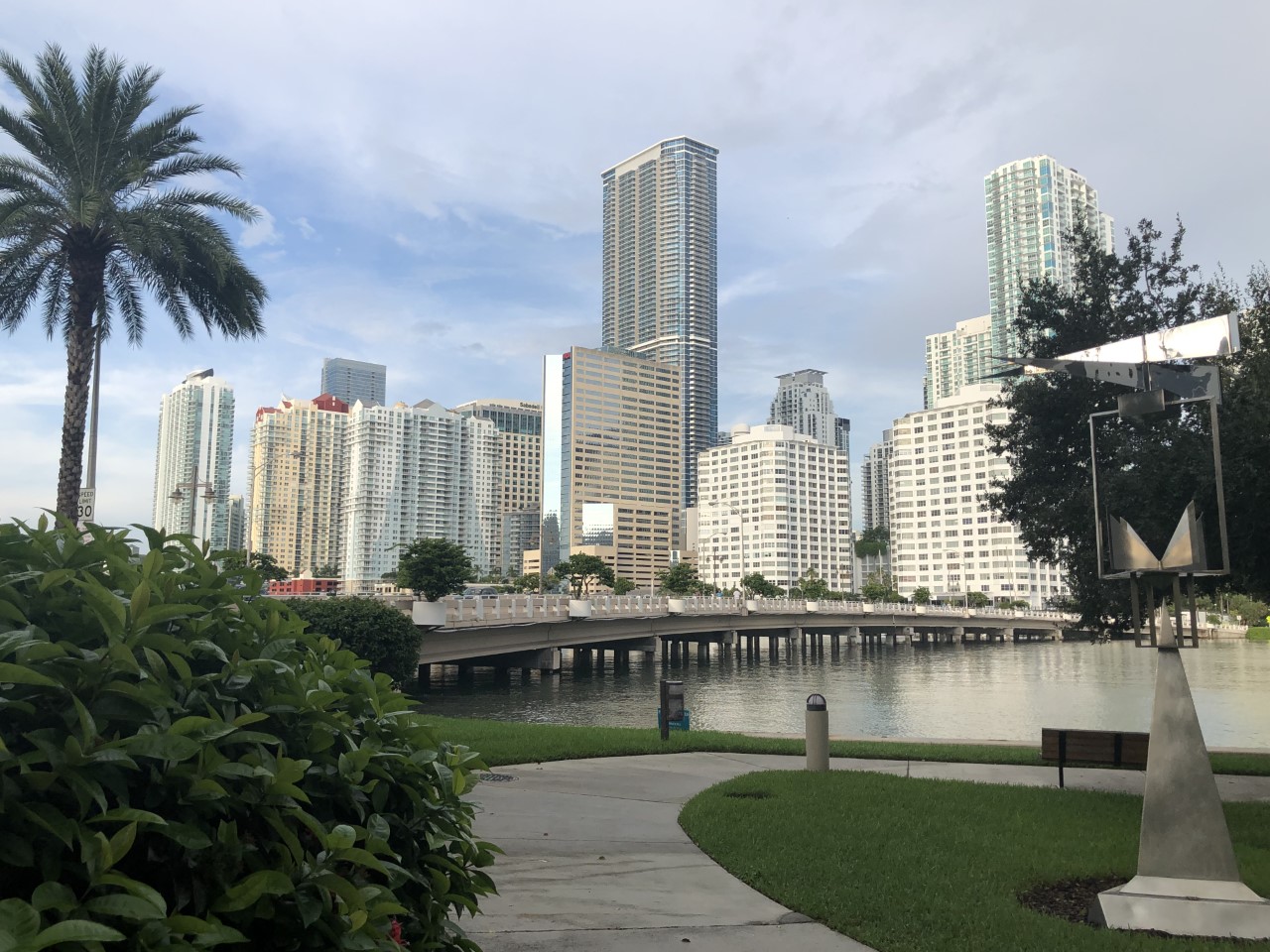 I leave you with what I happened upon a few yards from the back door of my hotel. From the amount of their activity, I gather they found a good pecking place. 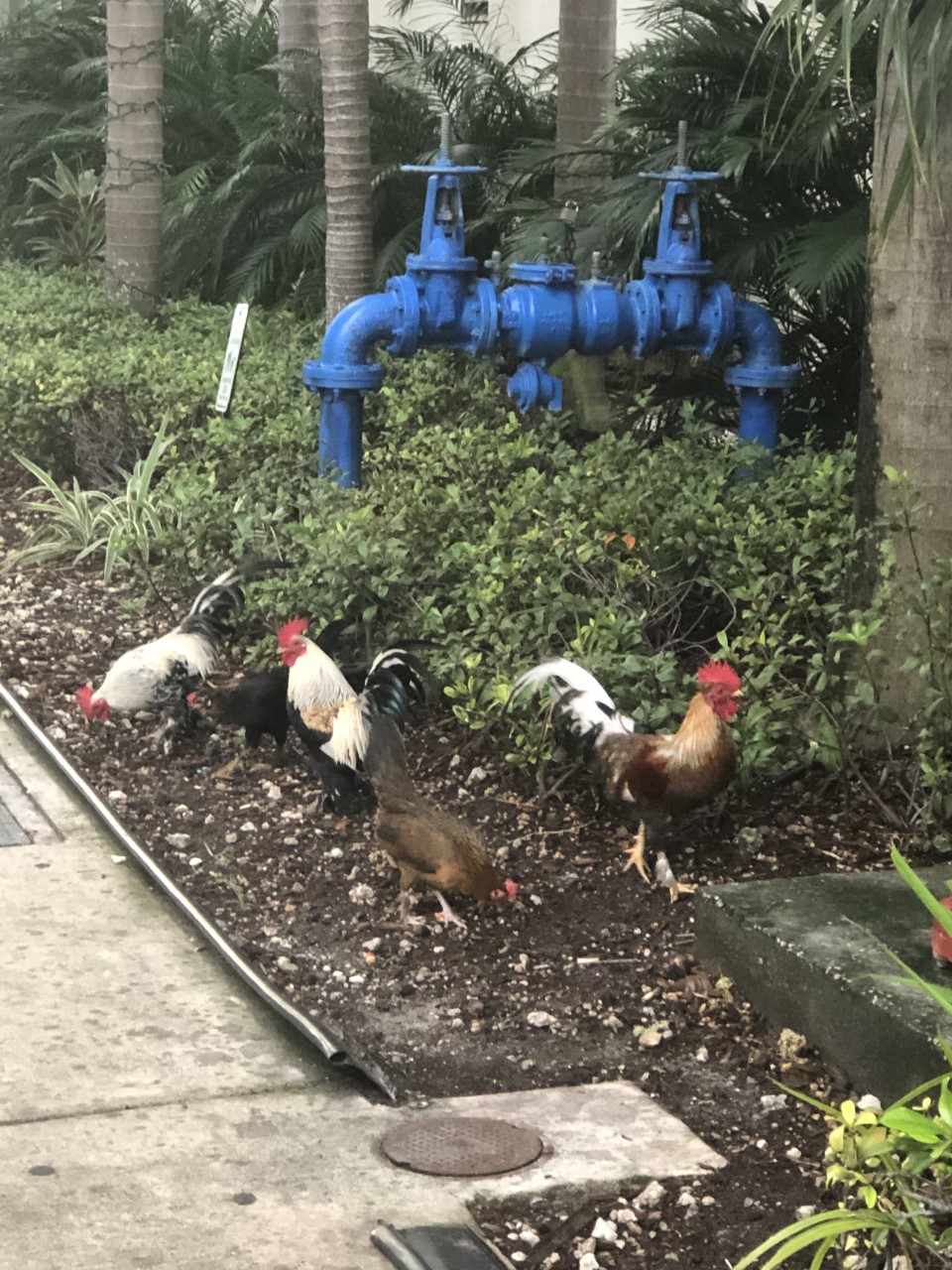 I guess these are free-range chickens. There was no indication they belonged to anyone.

Guess what? Category Three Hurricane Dorian is bearing down on us. It may make landfall on Labor Day. Batten down the hatches!

See: All my Florida blogs 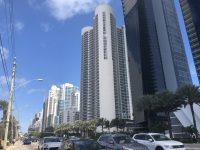