Take a morning walk along the St. John’s River in Sanford, an easy 30-minute drive north of Orlando in Central Florida

On our road trip from Charlotte NC to Miami, the third stop (after Charleston and Savannah) was St. Augustine, Florida. Established in 1565, it’s the oldest continuously settled city in the US. It’s also a fun tourist town with its shops and restaurants and inns.

You can do a bit of history here, too.

Here’s Delia in front of the González-Alvarez house, supposedly The Oldest House on the continent. Beginning about 1650 a series of thatched wooden structures occupied this property when owned by the Spanish. Later, British and American owners added a second story. 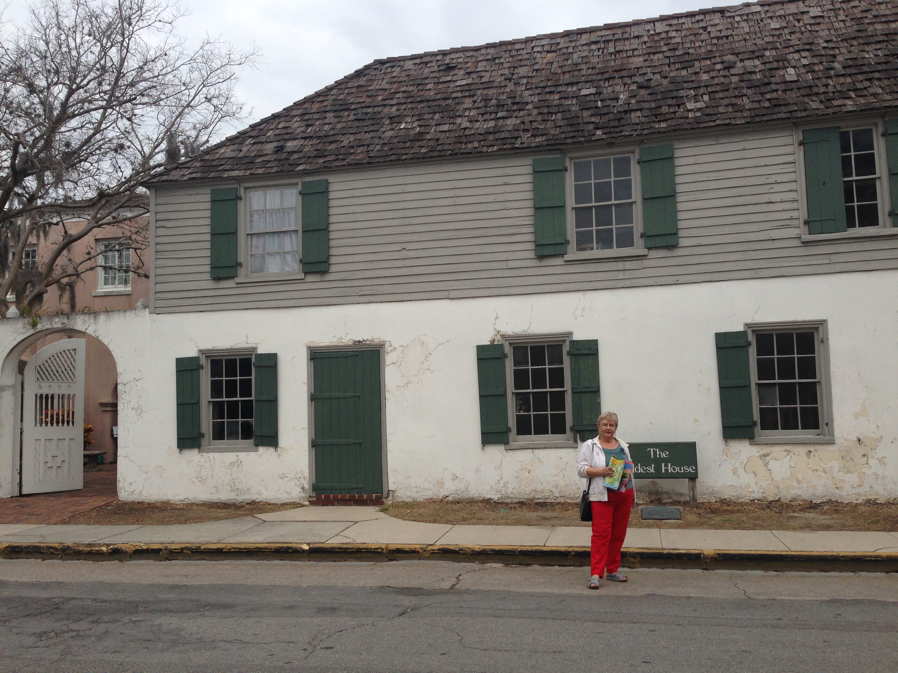 Here I am at the Spanish fort: 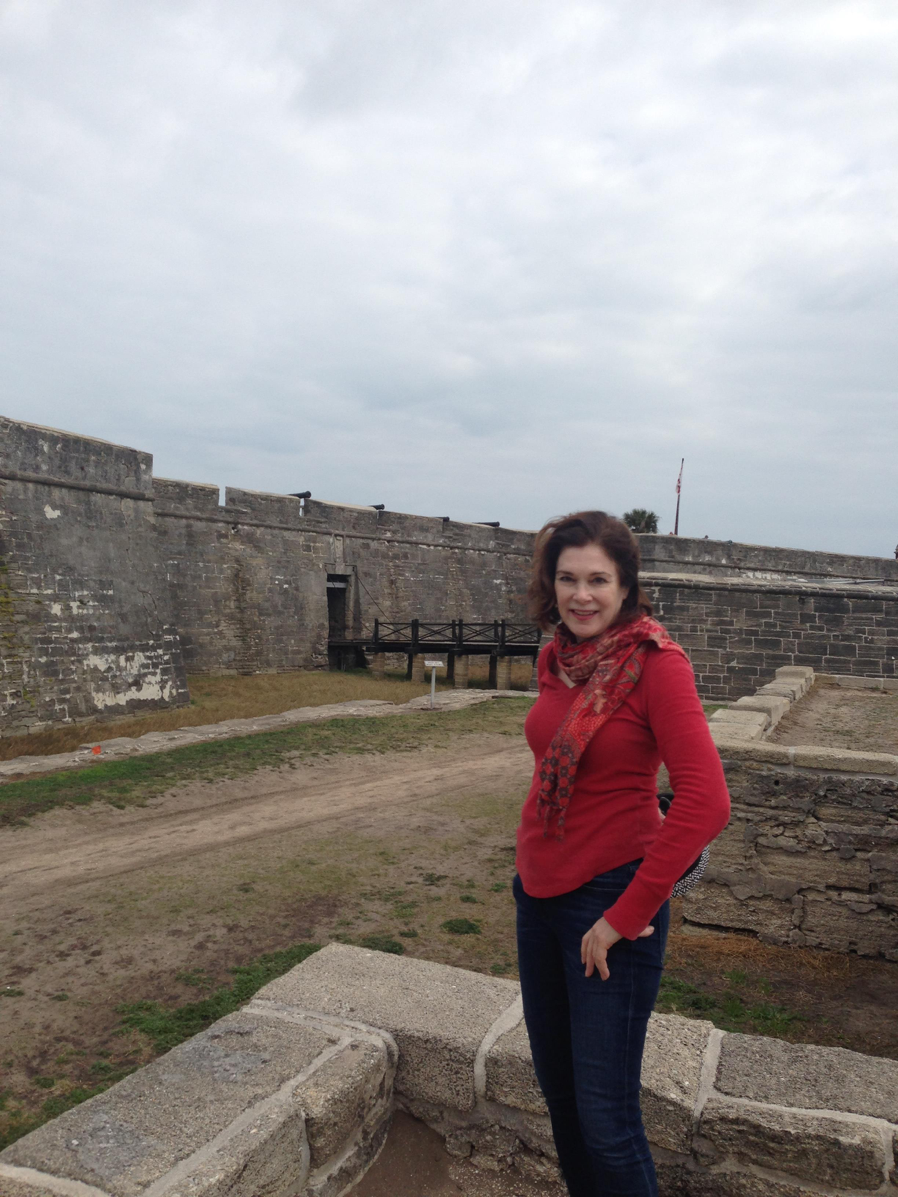 Castillo de San Marcos, begun in 1672, is the oldest masonry fort in the US and was designed by the Spanish engineer Ignacio Daza

Although St. Augustine was a stop on our way to Miami, it’s only a couple of hours from Orlando and makes for a pleasant day trip when you’re in Central Florida.

Other day trips in the area I’ve done lately include:

A forty-minute drive northwest of Orlando, Mount Dora is ideal for day-trippers. 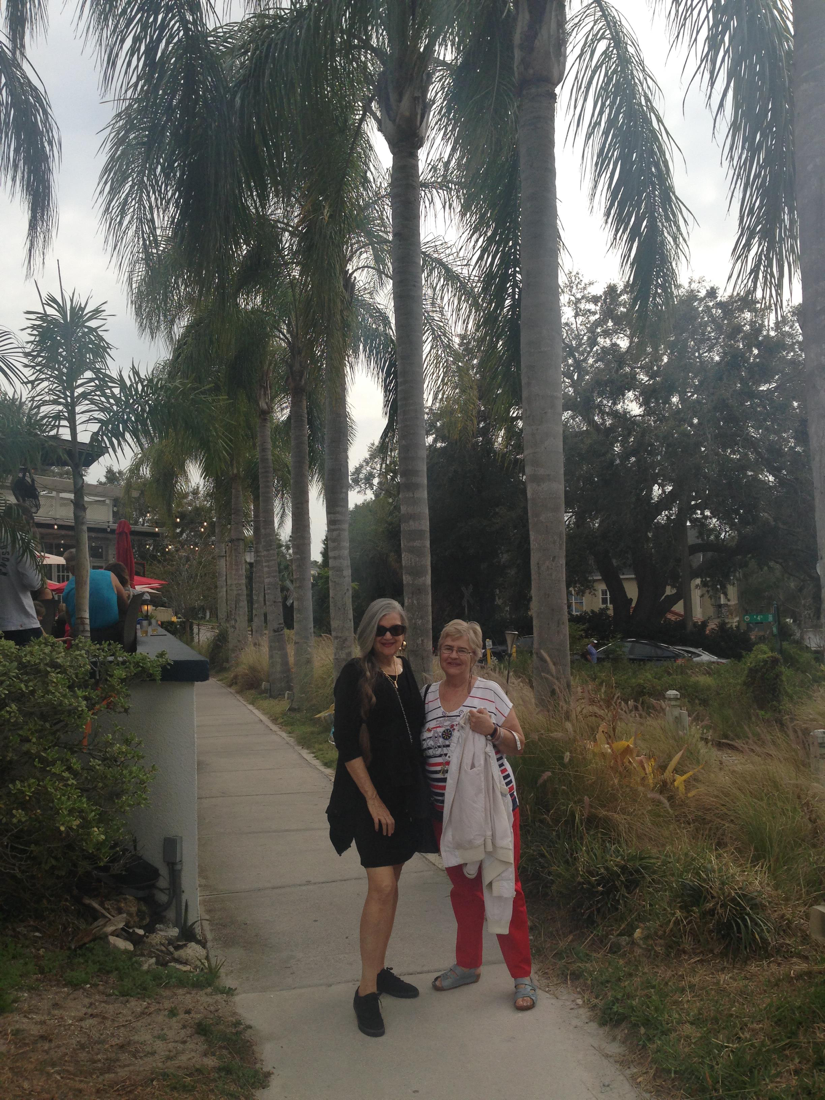 Gail and Delia enjoying a stroll

You can walk through bubbles: 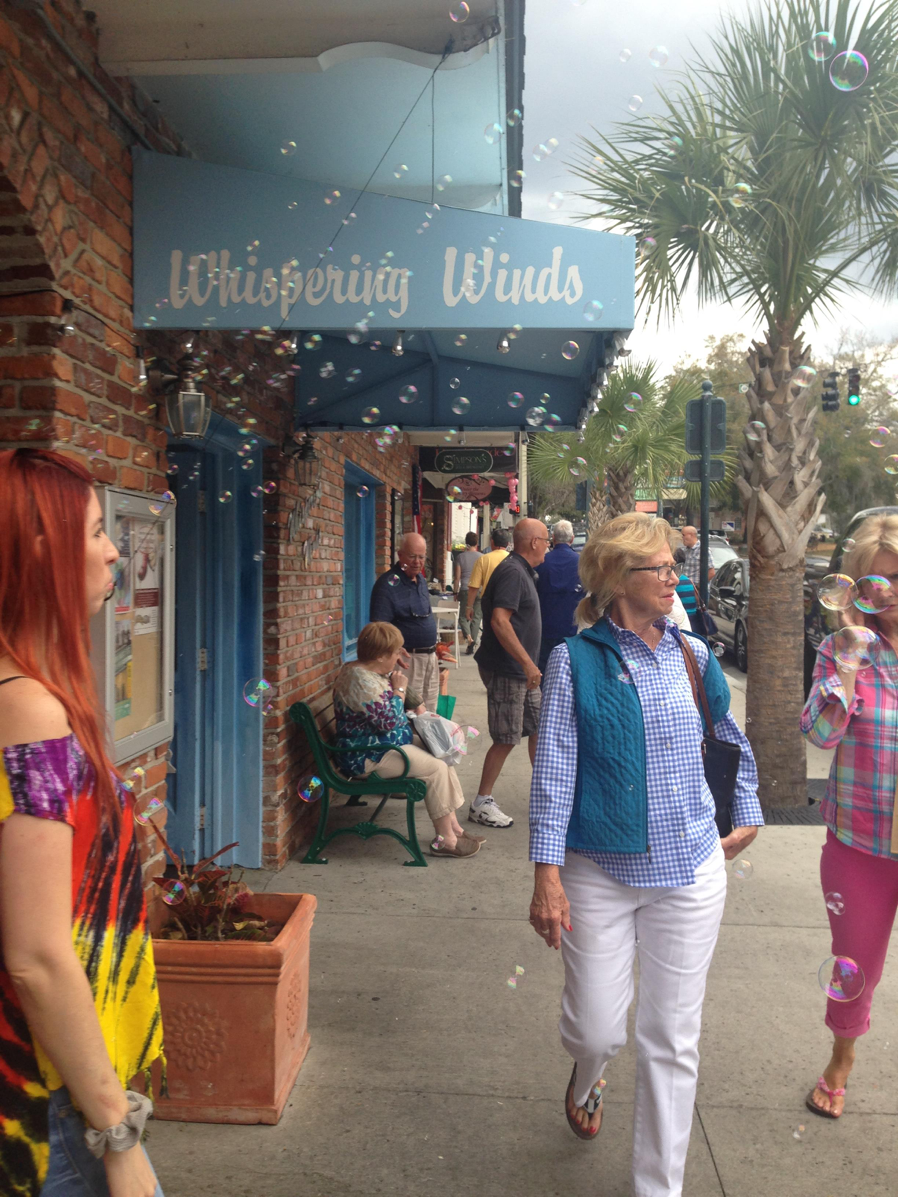 This street – well, every street in Mount Dora – has tchotchke stores galore, so many in fact that one of them has thoughtfully provided a Bored Husband’s Bench: 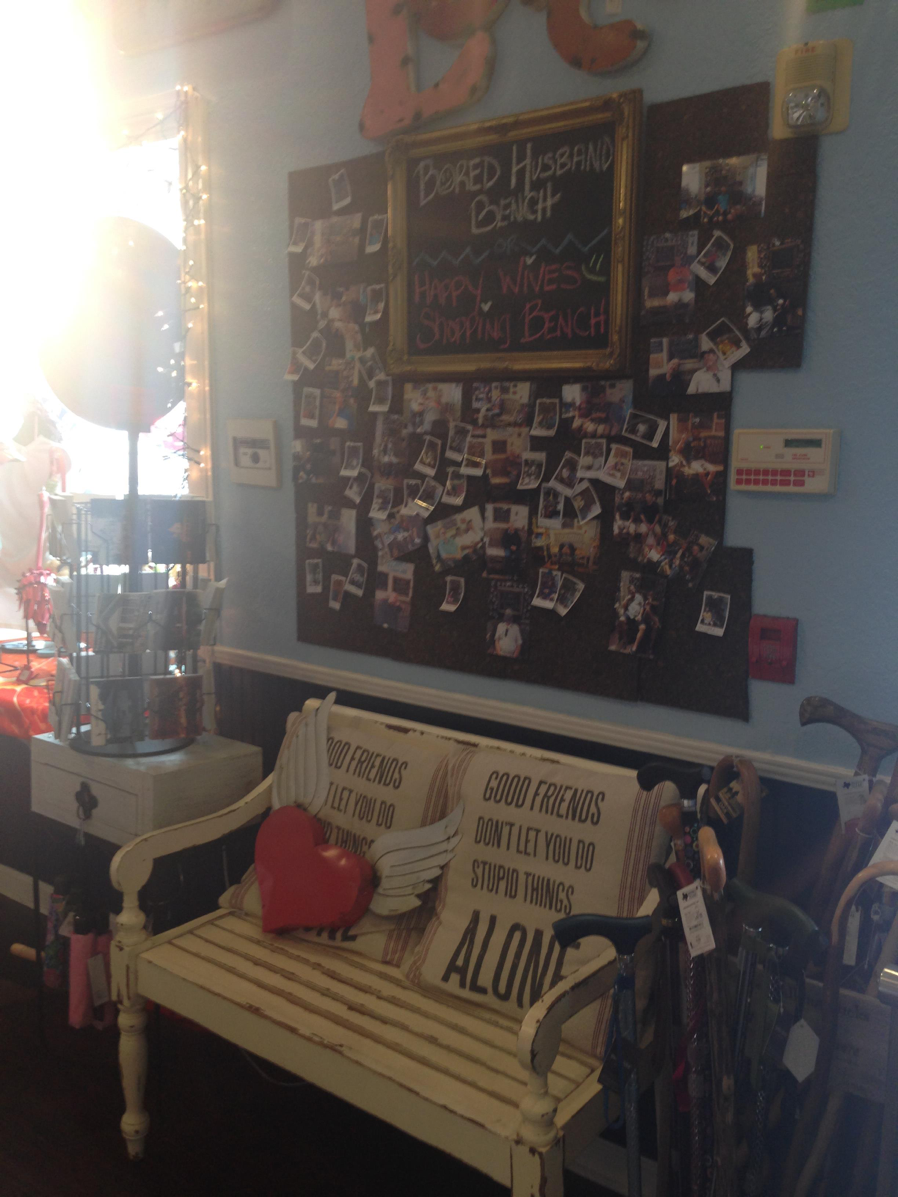 Canes? Pillows? Stuff to put in your house? They’ve got it!

Here’s a handy duo of shops: you can satisfy your desire for muffins and ammo all at once (and then go out and shoot something on your sugar high?): 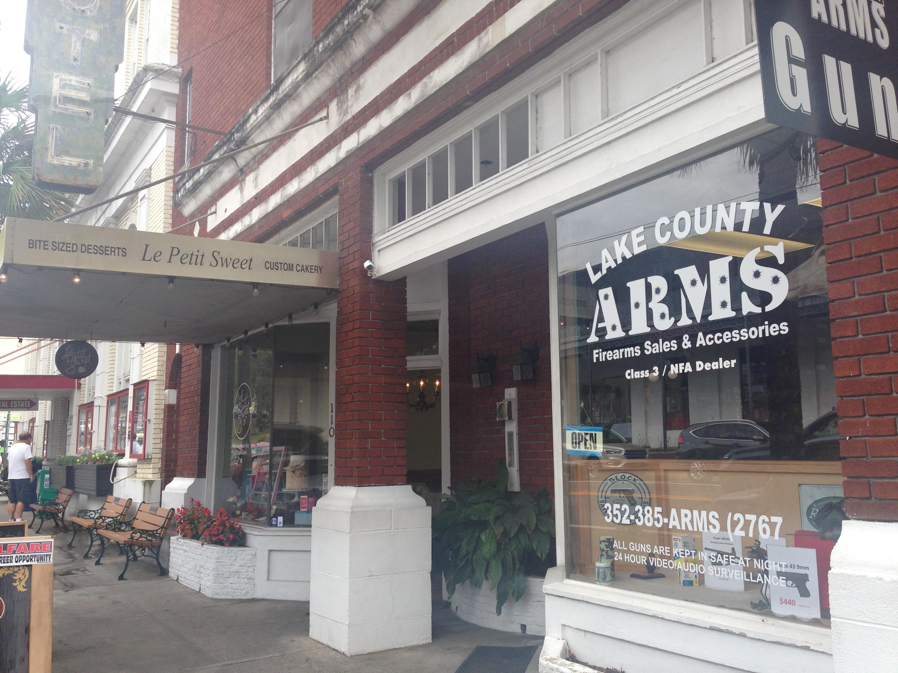 After that it’s time for tea at the Windsor Rose 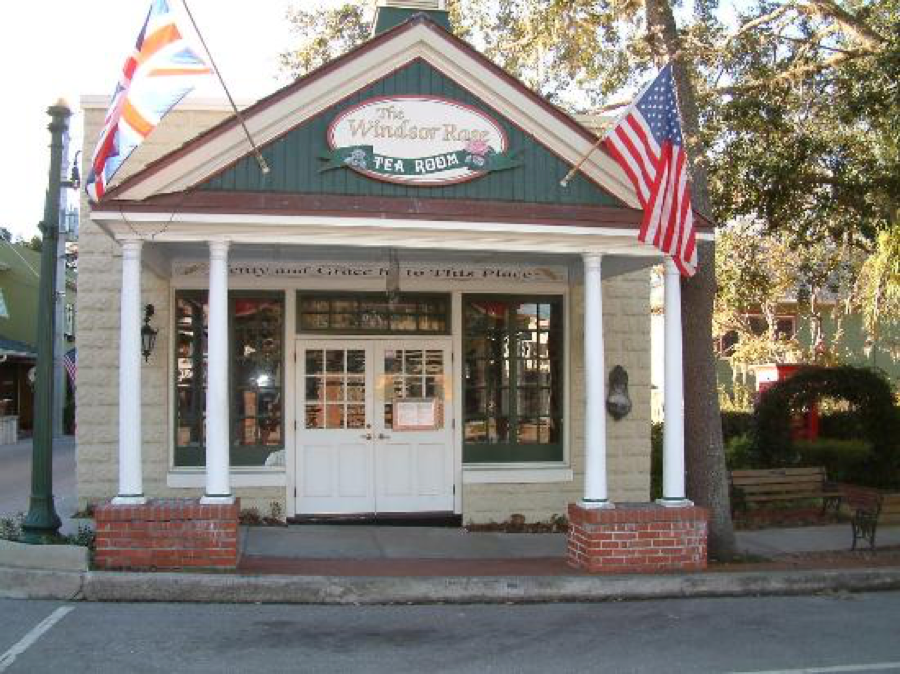 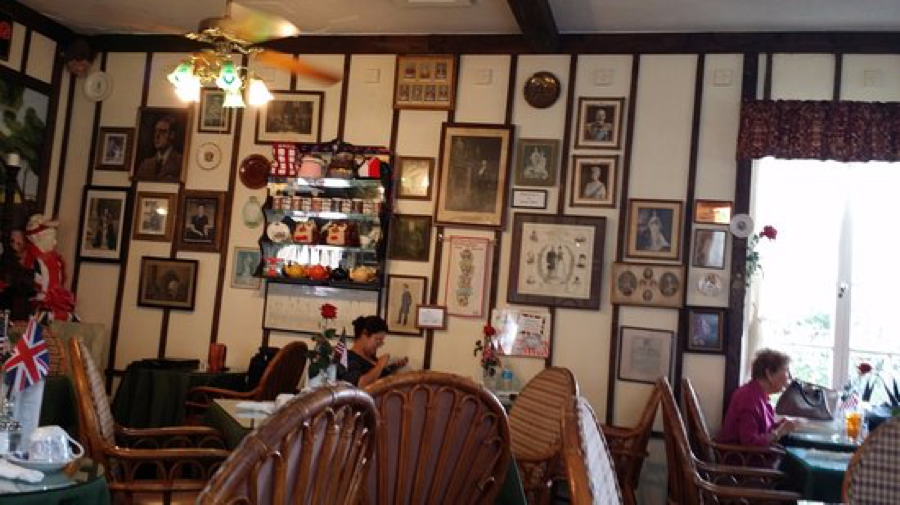 The teapots come with tea cozies

This past Sunday I went here with two friends to go to the play The 25th Annual Putnam County Spelling Bee in the historic Garden Theater. 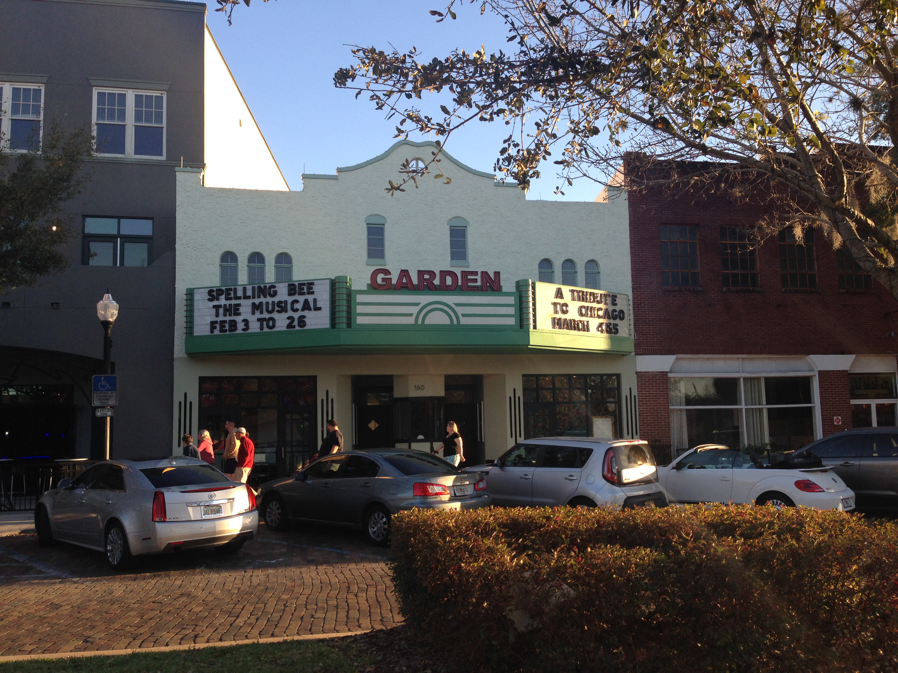 Sunday was the last performance. It was sold out

The play was a hoot and is still on Broadway.

Afterwards we had a bite to eat at the Tasting Room in the Edgewater Hotel about a block away. This cool safe sits behind the registration desk in the lobby: 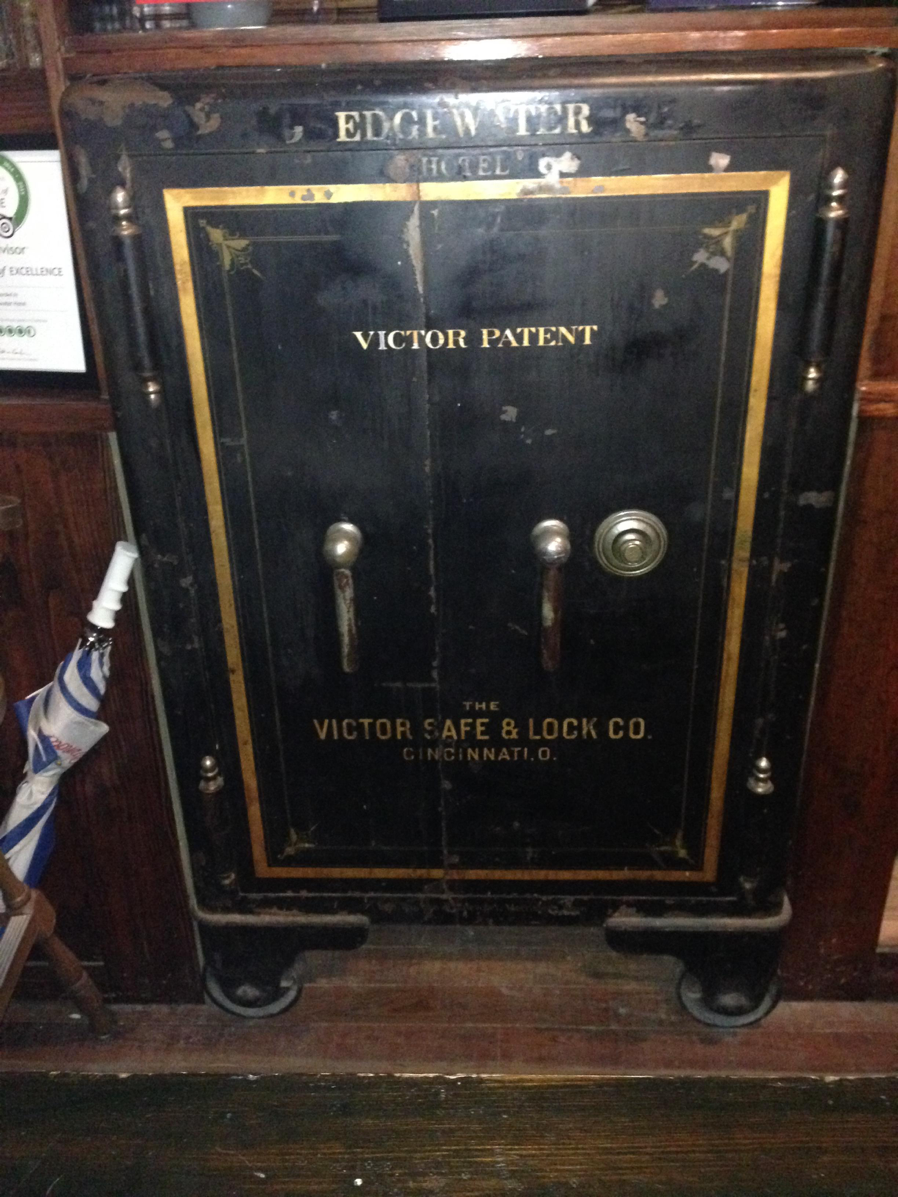 Winter Garden is a charmer and is about 30 minutes west of Orlando. 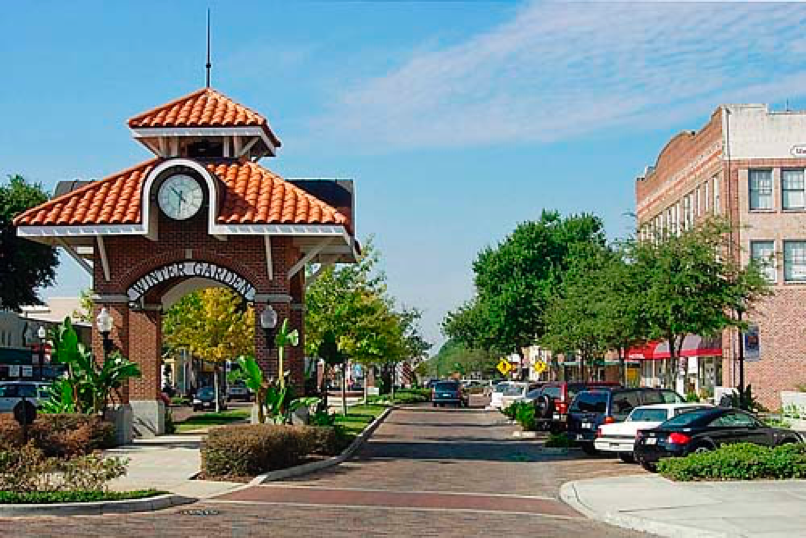 Plant Street, the main drag with the Garden Theater and the Edgewater Hotel

This past Saturday I went to the annual Food and Wine Fest in downtown. Robinson Street was closed off, booths were set up, and the eating and drinking began at noon. 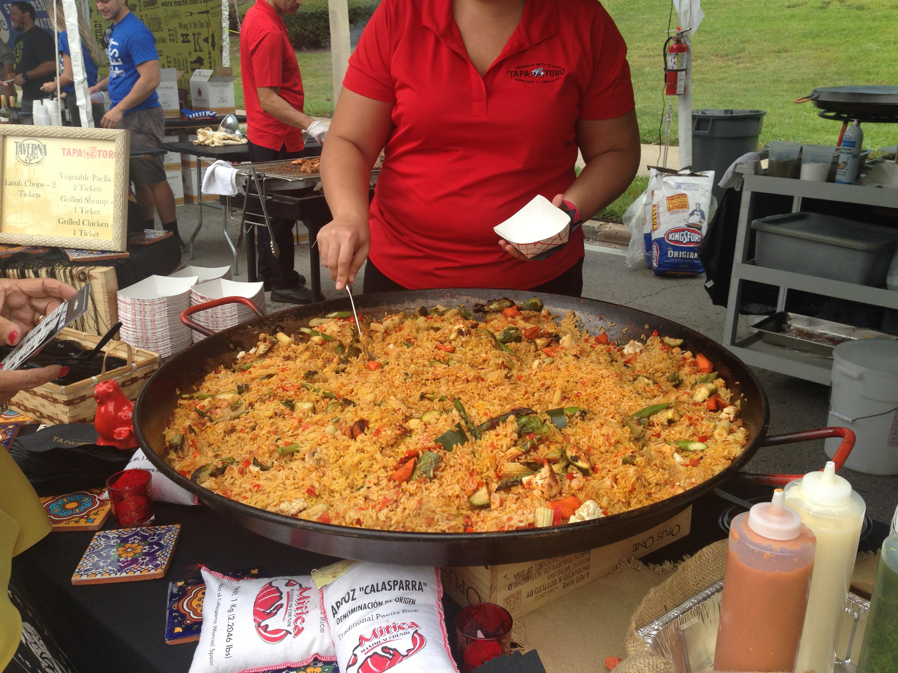 Because it’s Florida, there are flamingoes, often plastic: 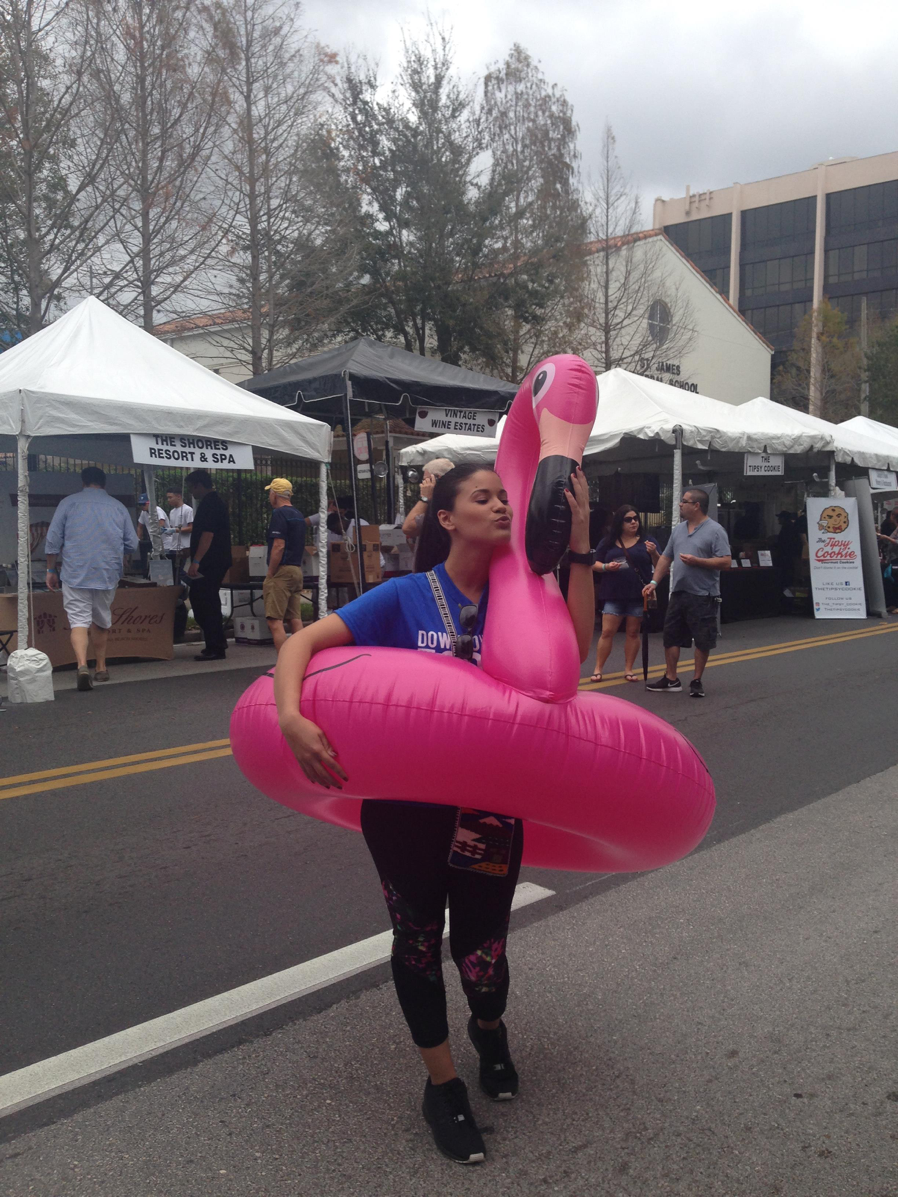 I’m not 100% sure, but I think she was promoting one of the wine booths, but not the one in the background. How does an inflatable flamingo figure into the promotion? A mystery, for sure

Then it’s back to eating: 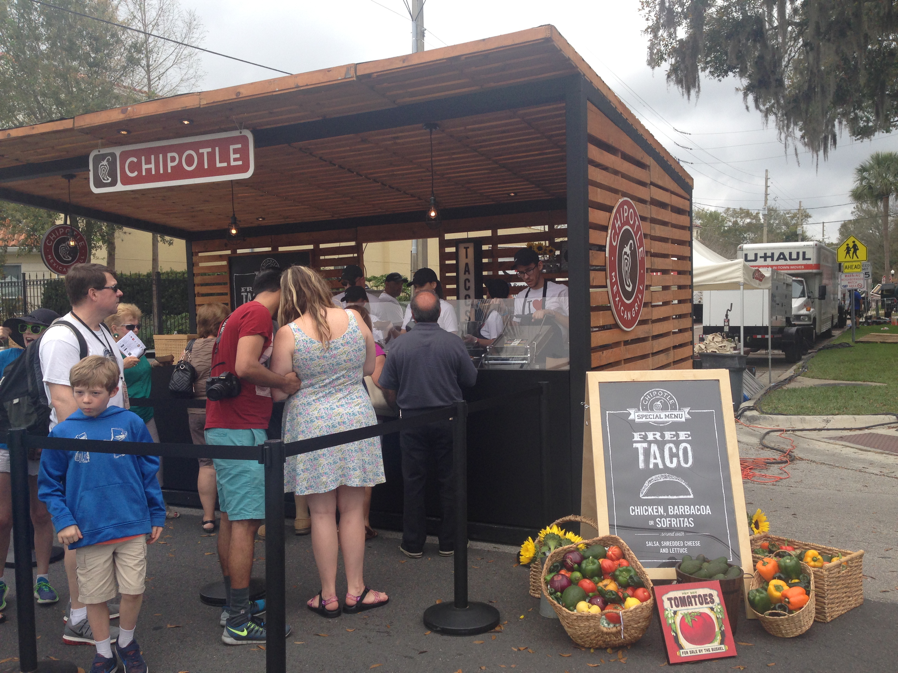 Although every portion was bite-sized, I filled up quickly: 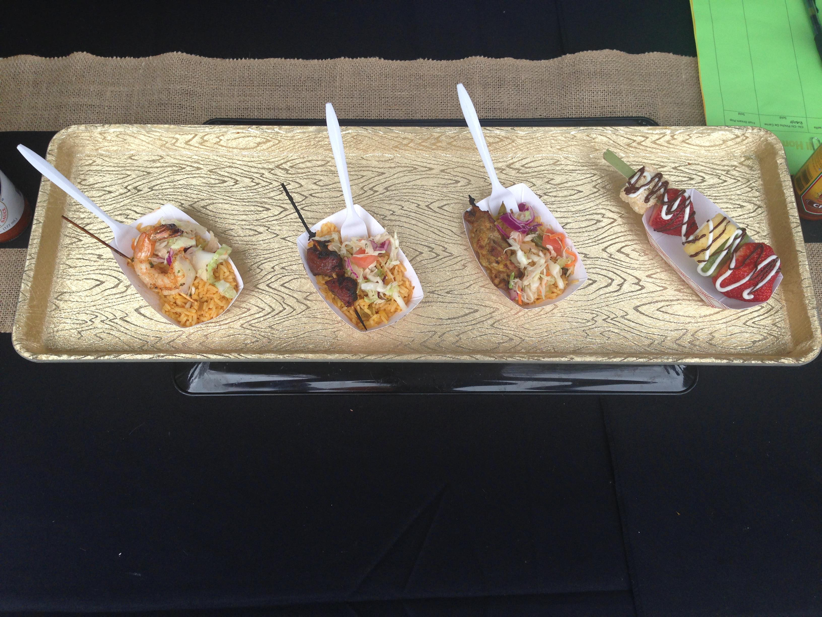 If you missed the Food and Wine Fest this past weekend, never fear. There is always something happening in downtown Orlando, even if it’s only the Farmer’s Market every Sunday. 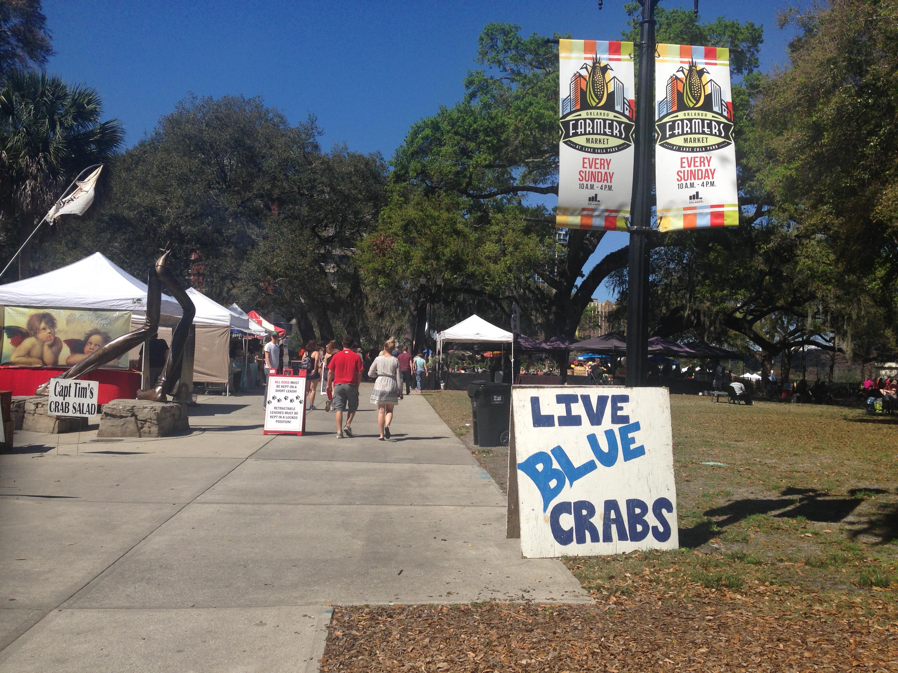 Other day trips in Central Orlando include Winter Haven and Winter Springs. Neither is to be confused with Winter Park, which is a snazzy neighborhood in Orlando. In addition there are plentiful state parks with hiking, cave diving and water rafting.

Sanford is also famous for Sofa and Suds, a couch-racing and beer-chasing event held in November – not to be missed! 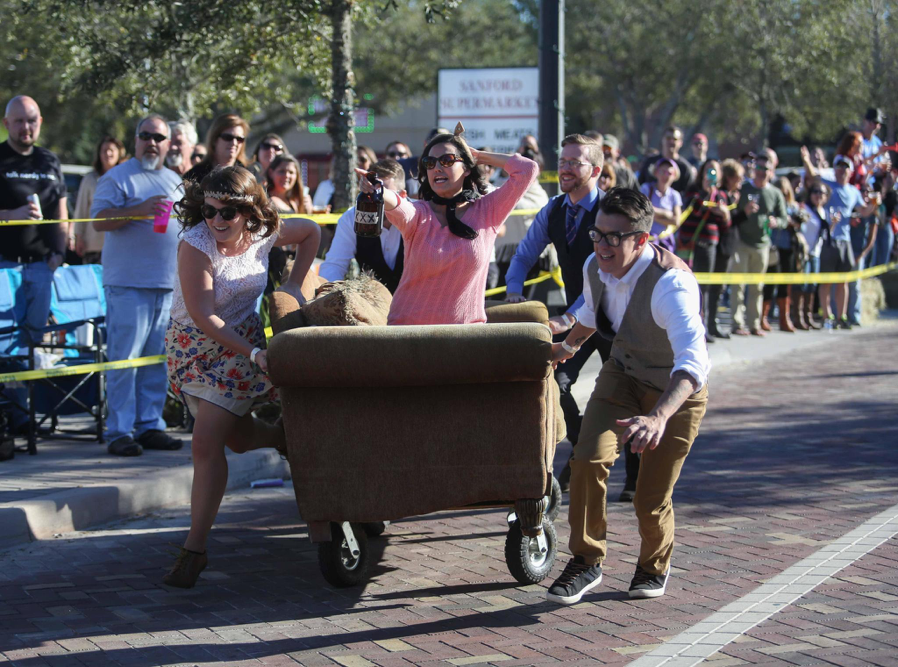 The competition is fierce

All in all a good day in Central Florida.