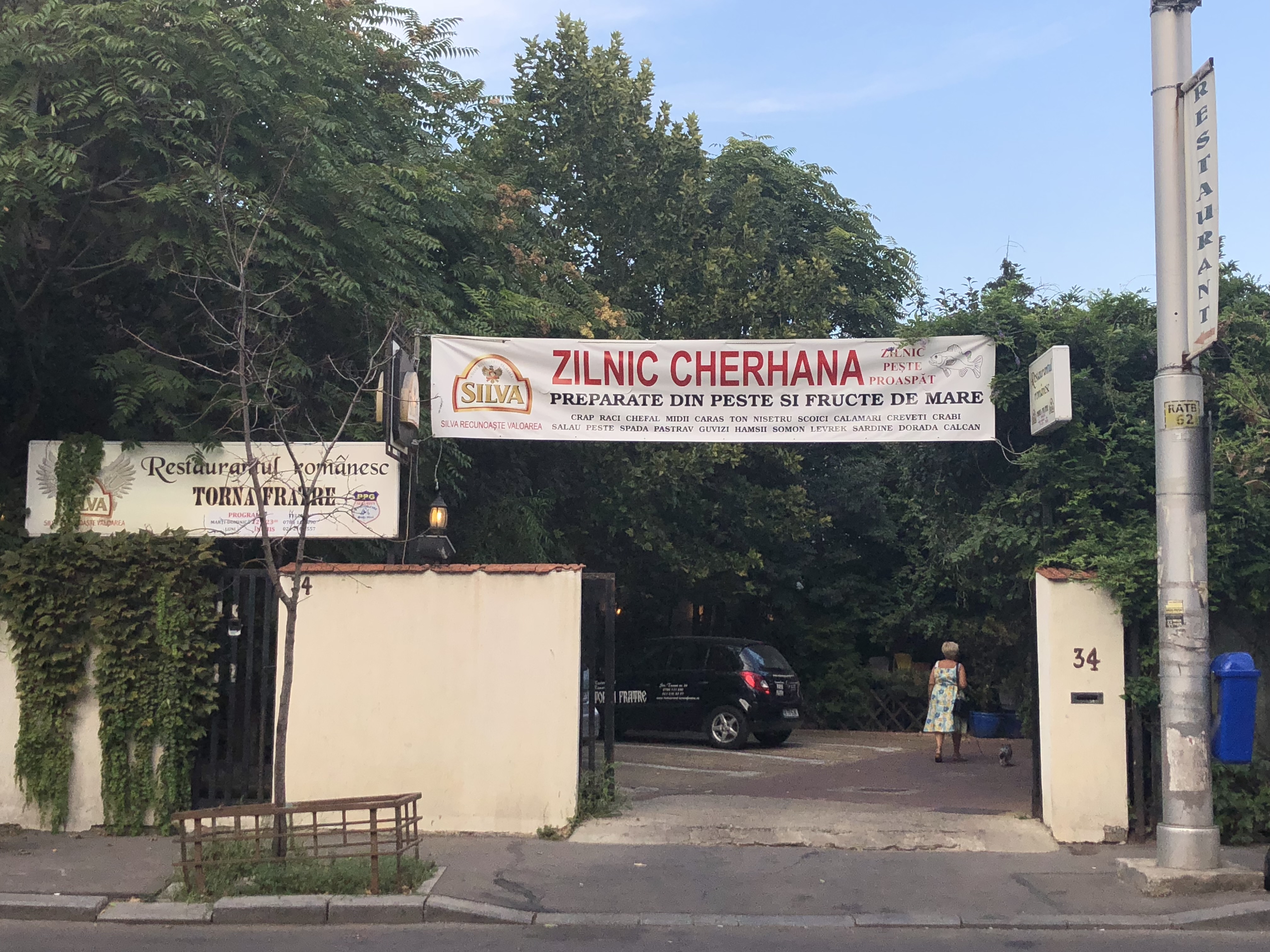 My favorite restaurant in Bucharest is Torna Fratre. The address is Strada Tunari 34, Sector 2. On the banner over the entrance in the title image, you can see the word cherhana, which is a restaurant specializing in fish. Zilnic means ‘daily.’

Food. The first criterion in judging a restaurant is, of course, the food. I have eaten here many times. I can say that whenever I’ve been here and whatever dish I’ve ordered, it’s always been fresh, well prepared, and delicious. The kitchen is absolutely consistent, thus making it easy to return time and again.

Torna Fratre specializes in traditional Romanian dishes, with recipes that come from all regions of Romania and around its borders. The menu is a treat to read. 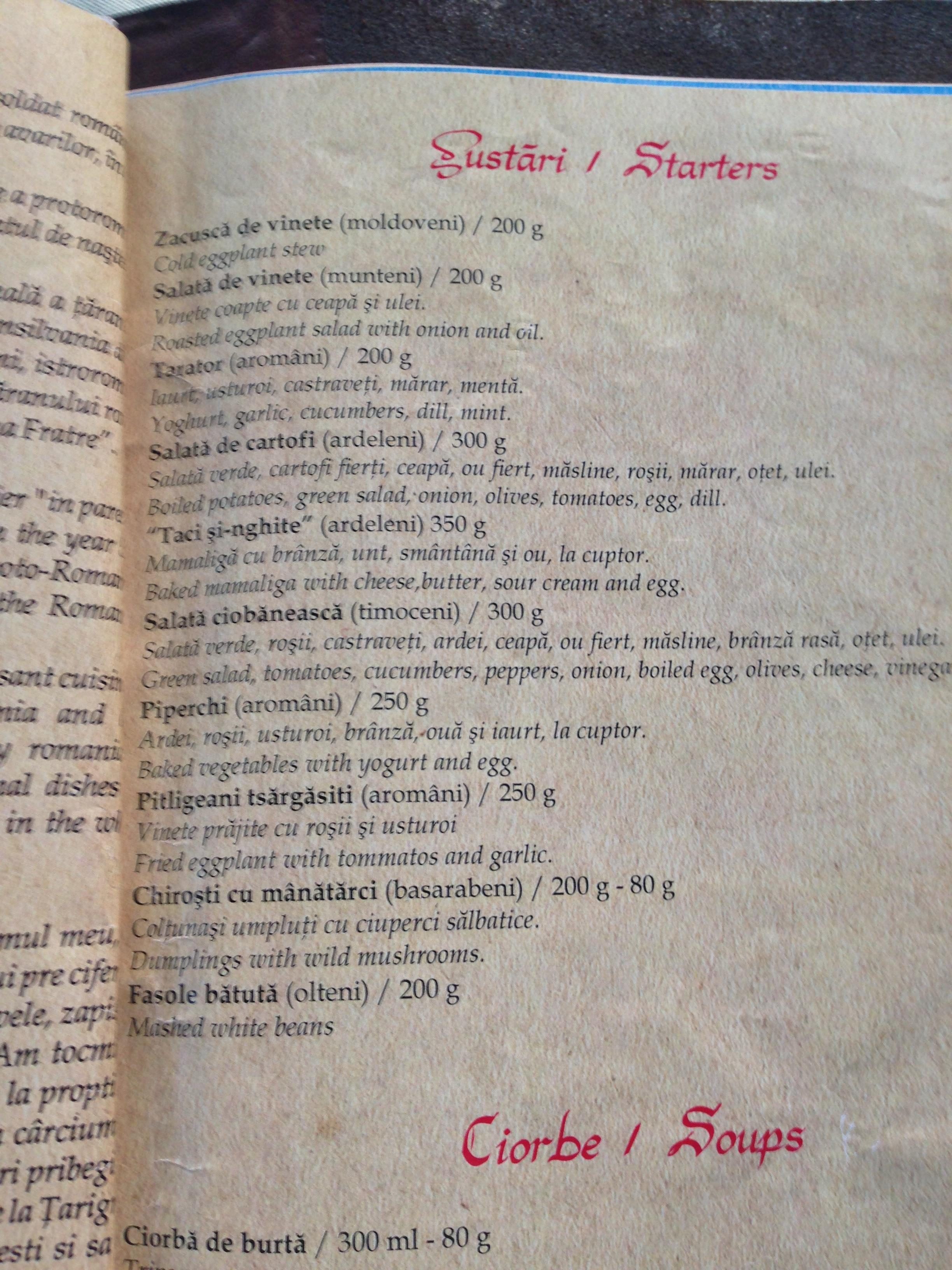 Here’s a map of Romania with the traditional provinces so you can place the dishes: 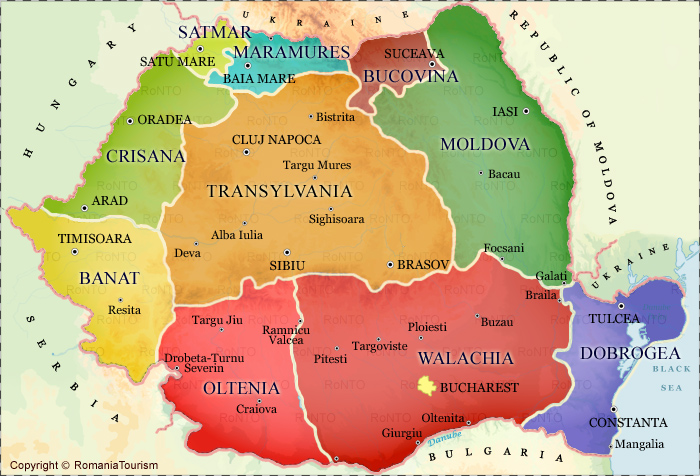 Ardeal = Transylvania (more or less); Basarabia = Romanian Moldova + Moldovan Moldova; and Aromania is to the south of the present border of Romania

For my main dish one of my favorites is păstrăv la grătar ‘grilled trout’ with grilled vegetables (or French fries, if the whim comes over me). But, really, you can’t go wrong with any of the fish.

I usually order icre de ştuică ‘sturgeon roe’ as an appetizer and split it with whomever I’m with. The other day I (thought I) had a big appetite, so after the icre and before the fish, I also had a ciorbă de crap ‘carp sour soup’. Romanians take their ciorba seriously. The one I had was super fresh and tasty.

(My eyes were bigger than my stomach. I took a lot of my main course home in a box, and it made a very satisfying breakfast the next day.)

Setting. The physical restaurant itself is a lovely Romanian-style house. 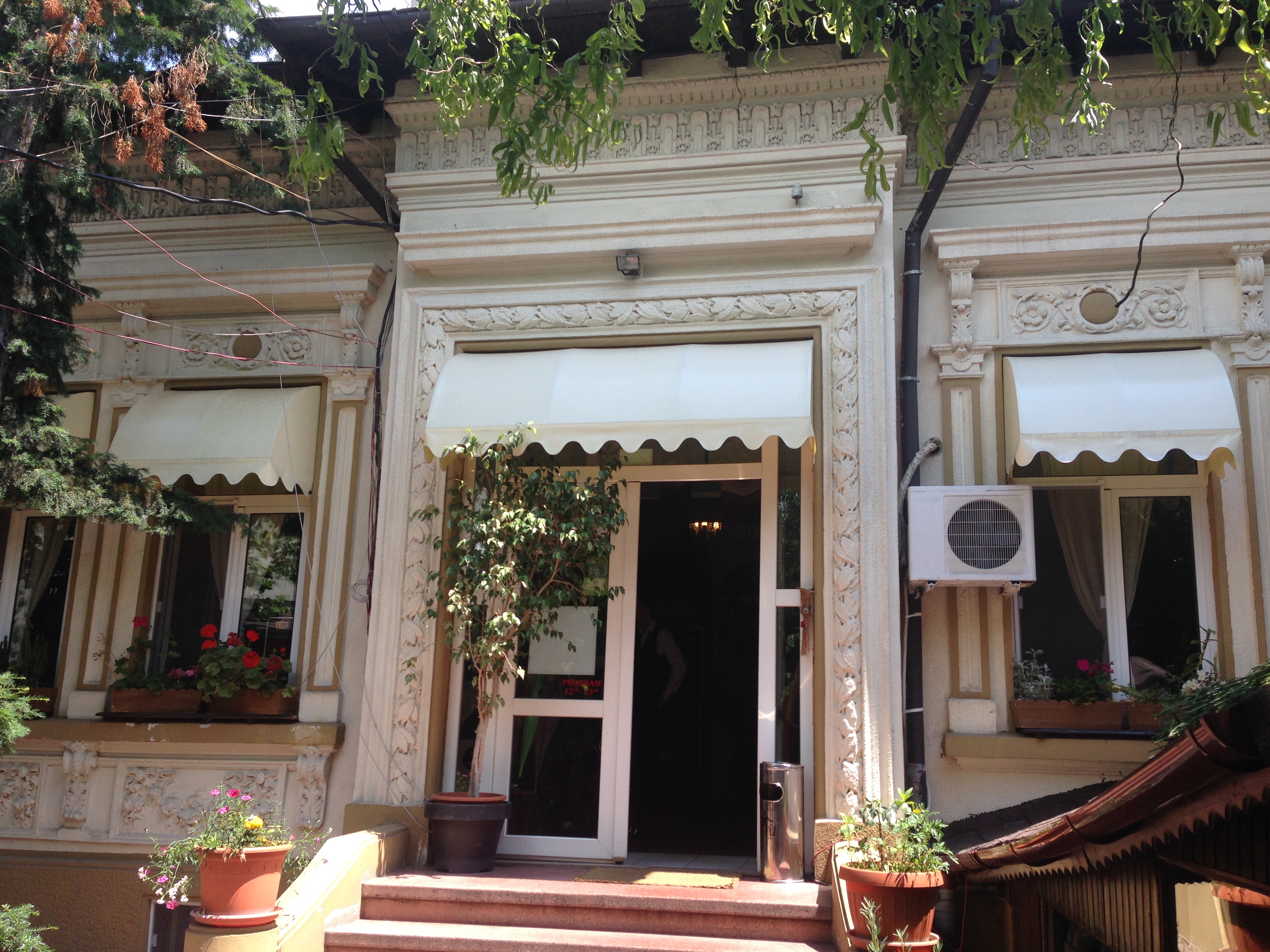 It has one smaller interior room with two sections. It also has a larger room off the back, which can be used for events.

The garden in front is off a busy street but still has a sense of seclusion. So the garden’s the place to be on a beautiful summer evening. 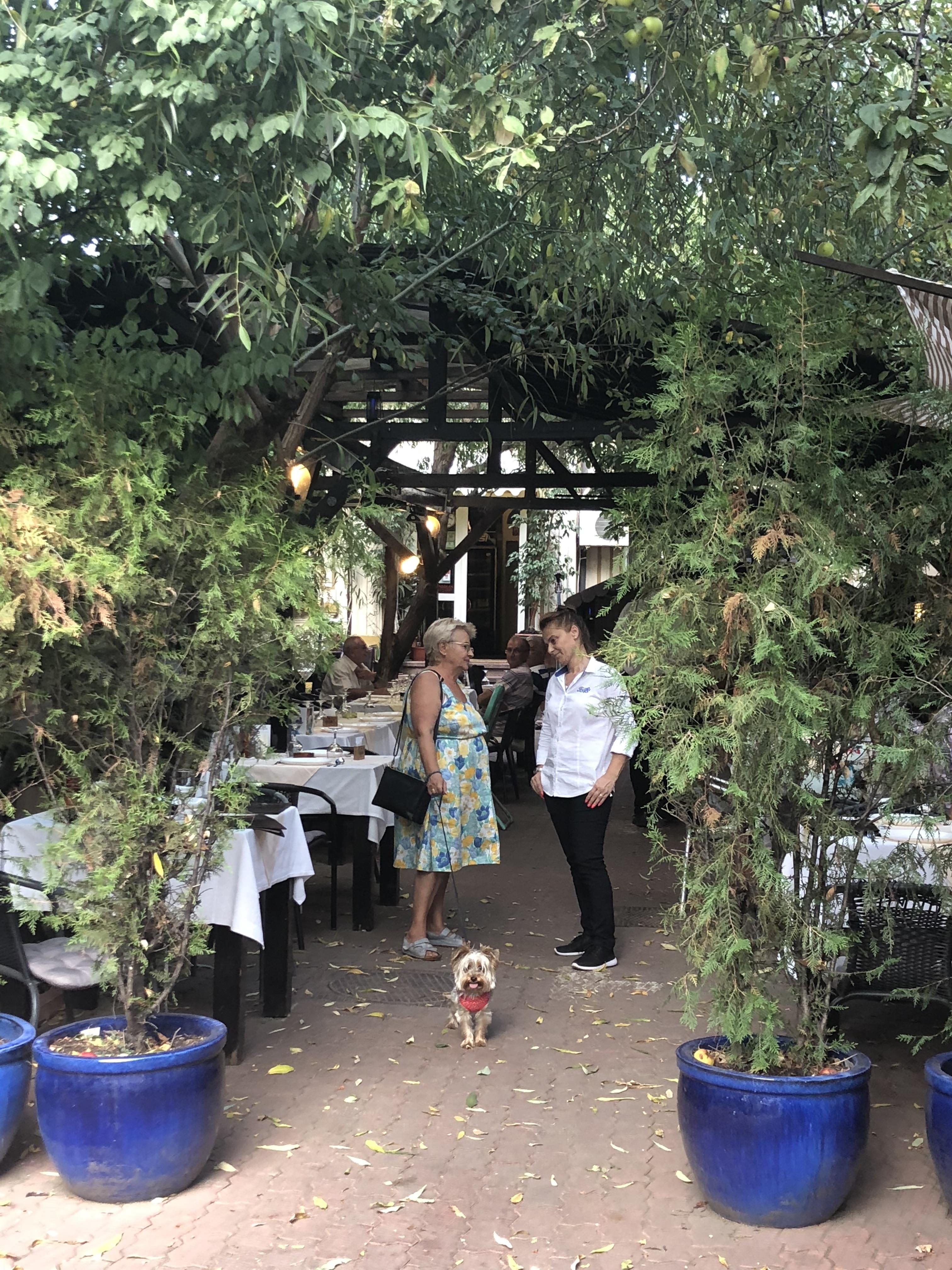 There’s Delia on the left talking to Michaela, a waitress we often have, plus Uma the Yorkie

Thursday through Saturday evenings, there is live music – traditional Romanian, of course. 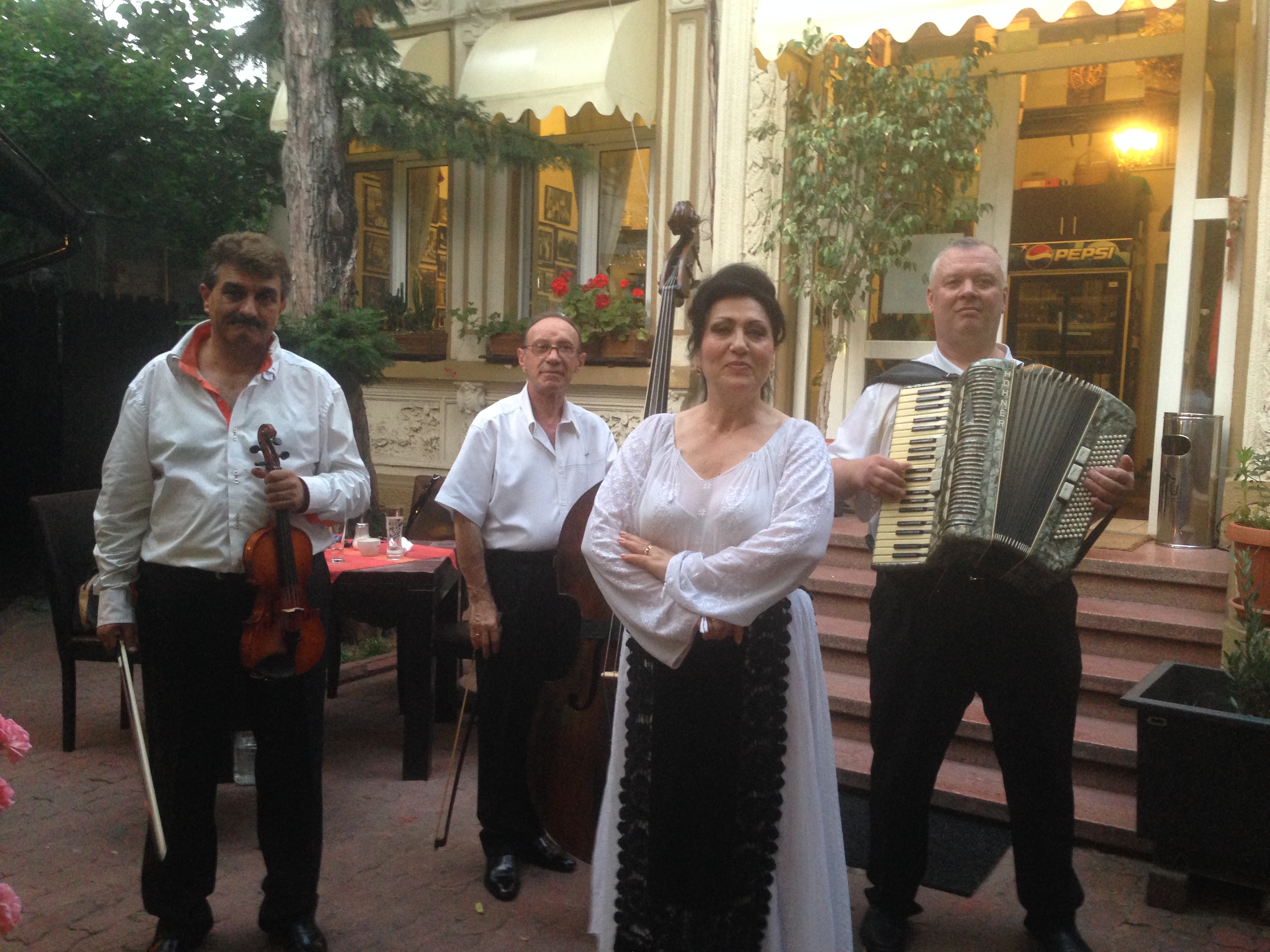 Lăutari – ‘fiddlers’, that is ‘traditional musicians’ 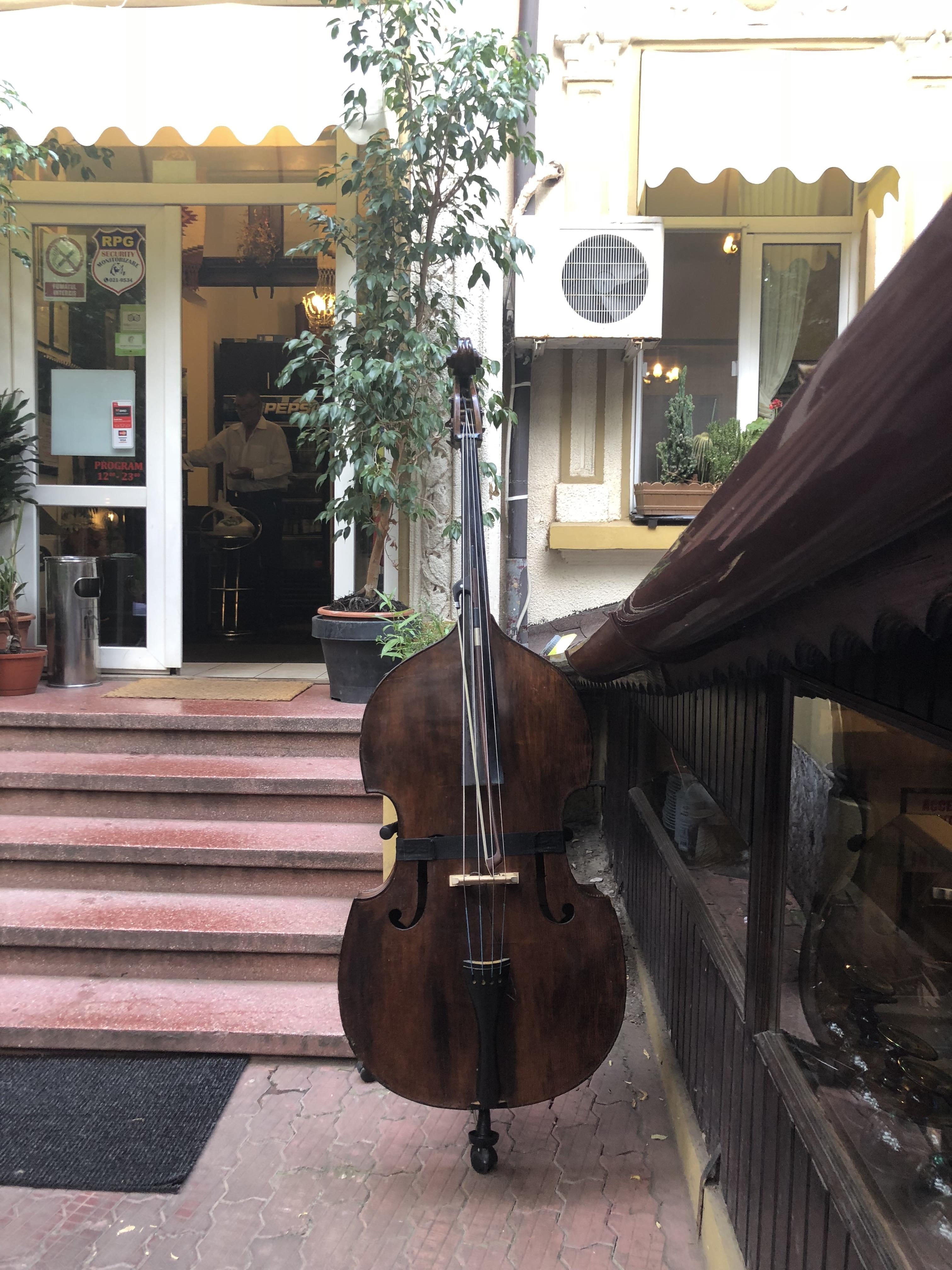 Atmosphere. The owners, Daniela and Aurel Pascu, created this traditional Romanian restaurant, and they get the credit for the welcoming atmosphere. Daniela has an outgoing, fun-loving personality, and it comes through in their establishment. 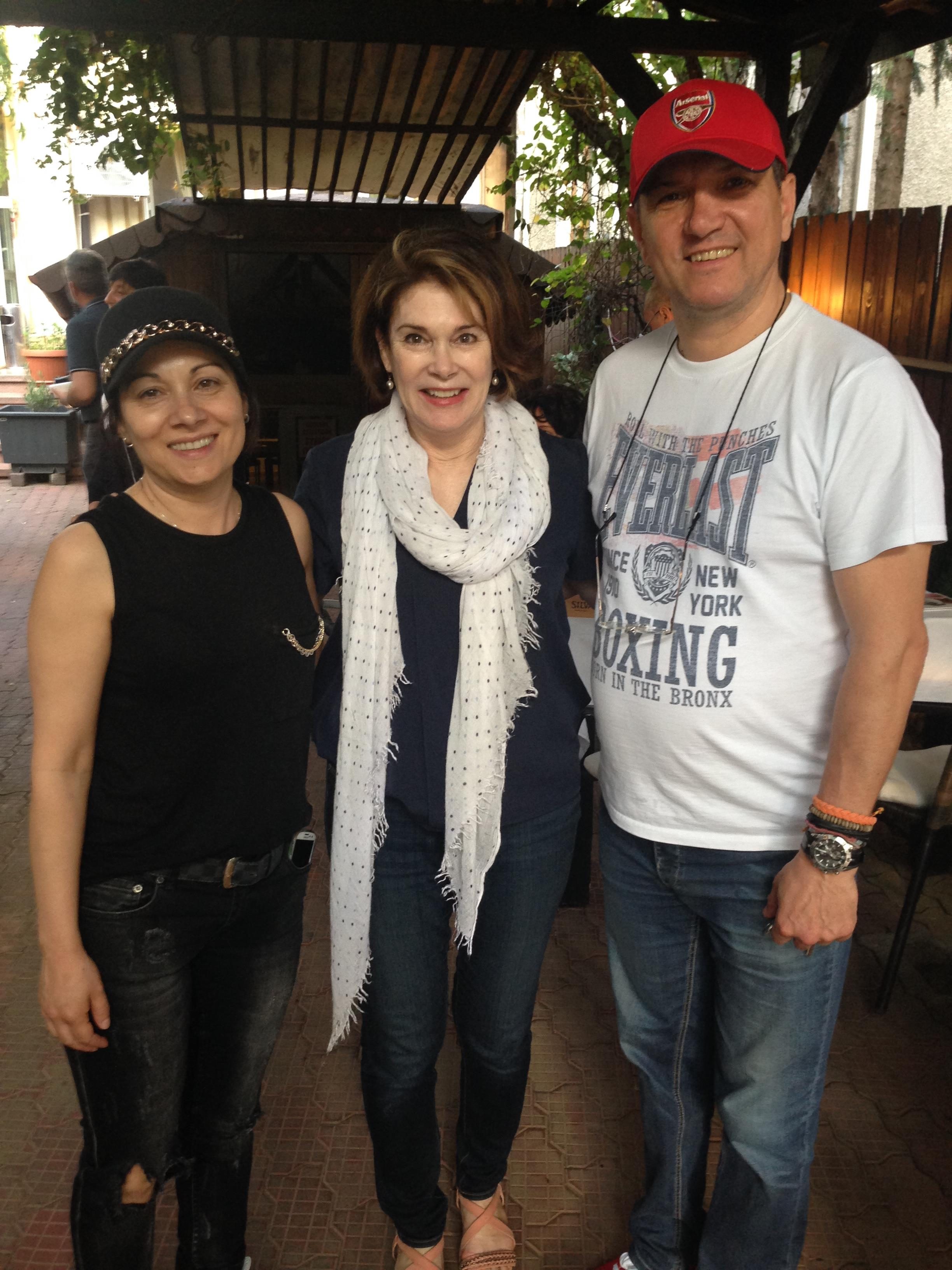 Daniel and Aurel with me in the middle

The bill comes in a leather holder. 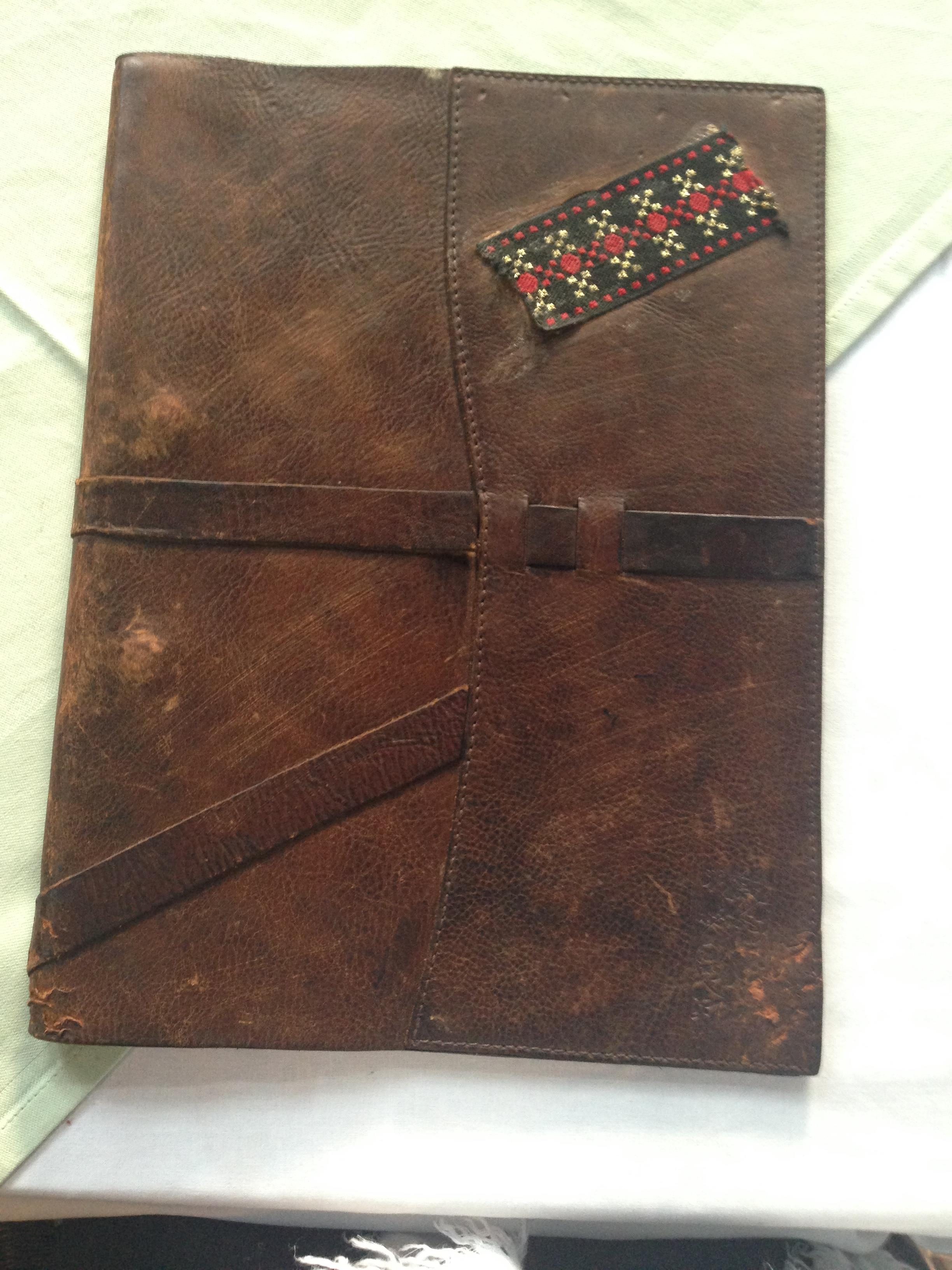 Linguistic notes. i) The name of the restaurant comes from the phrase torna, torna fratre means something like “Go back, go back, brother!” in the first preserved form of very old Romanian, dating perhaps to the sixth century. There are different historical explanations, all revolving around a military incident. It might have been as innocent as a solider not noticing a bag he was responsible for had dropped and another solider pointing it out to him, exhorting him to go back for it. In any case, the name of the restaurant goes back to the roots of the language, just as the menu goes back to the roots of Romanian cuisine.

ii) It will kill me not to mention that cherhana ‘fish restaurant’ is a word borrowed from Turkish. I have a mild (okay, rather large) obsession with Turkish words borrowed into Romanian. See:

By contrast, a zahana specializes in meat dishes. I should mention that Torna Fratre does serve meat, also traditionally prepared.

Basel, Switzerland at a Glance – a travel blog 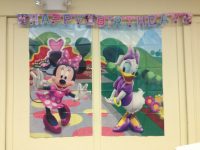