Last week Bill Adair, founder of Politifact, gave a packed talk at Motorco in downtown Durham entitled “The Truth-o-Meter, Pants on Fire and fact-checking the 2016 election.”

Adair is the Knight Professor of the Practice of Journalism and Public Policy at Duke University and the founder of PolitiFact, a project sponsored by the Tampa Bay Times to fact-check political campaigns and the media. 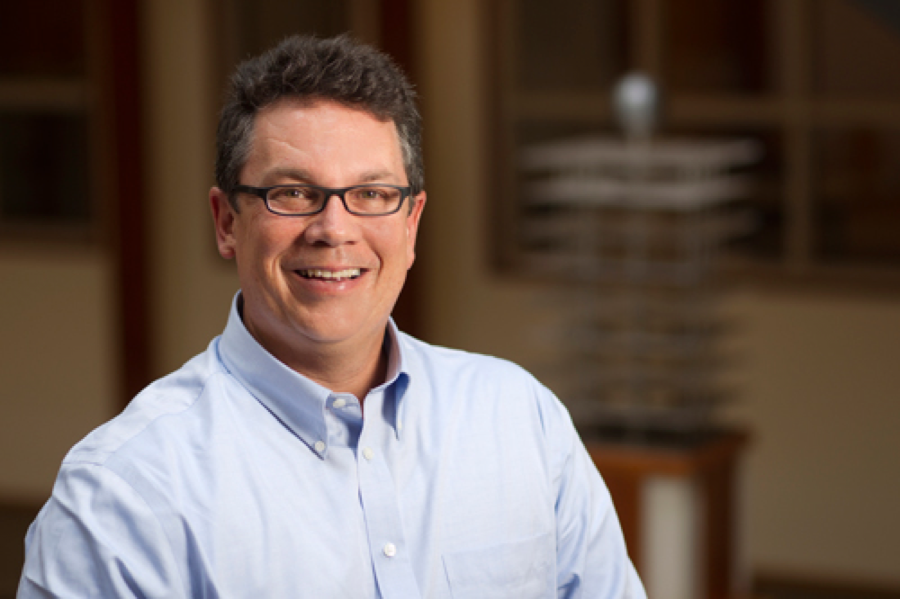 He started out by referring to Walter Cronkite and the news media in the old days that filtered the crazy stuff and wouldn’t publish or report falsehoods. 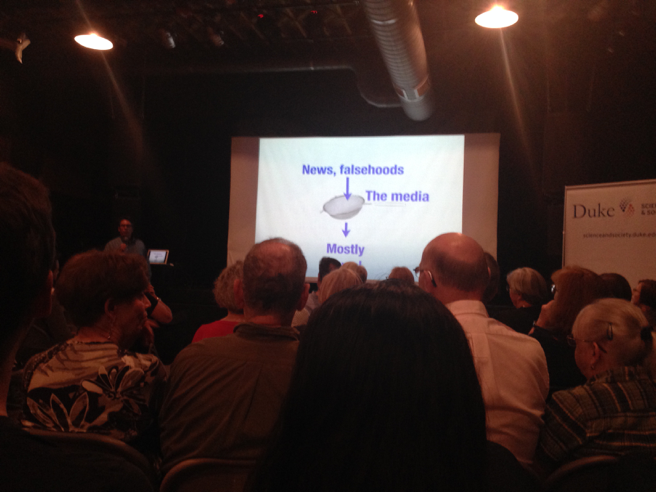 News as filtered by the impartial media.

He continued by telling us what all of us know, namely that now news stories can by-pass the media and reach a large audience, and falsehoods can be planted like seeds that get to the partisan media and explode. 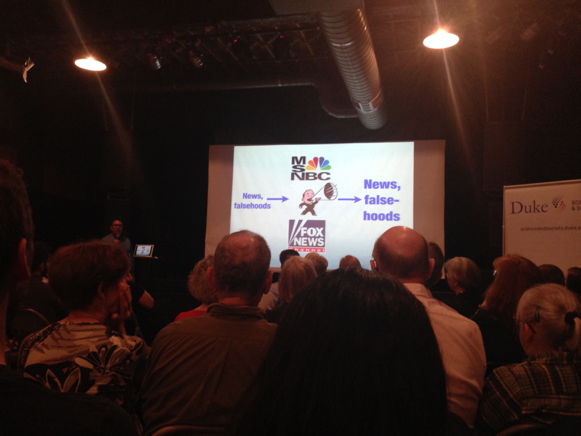 News as (sometimes, often, mostly) unfiltered by the partisan media.

Adair’s epiphany came in 2004 while listening to Zell Miller’s convention speech at the RNC when Miller cited details of then-Senator Kerry’s voting record on weapons. Adair thought they didn’t sound quite right but no commentator remarked on them or afterward held Miller accountable for his statements.

Note: If you’re interested in the truth/falsity of Miller’s remarks, see http://factcheck.bootnetworks.com/article252.html

So Adair got to work and founded PolitiFact in 2007 in time for the 2008 presidential campaign. He thought his activity might end there, but it turns out PolitiFact caught on, and it did so because Adair found a lively way to draw people’s attention to the importance of fact-checking. He realized simplicity was the key and so distilled the ratings to one of six: True, Mostly True, Half True, Mostly False, False and then everyone’s favorite: 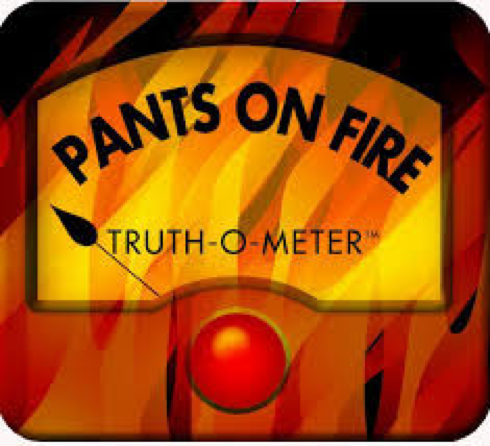 Pants on Fire is a falsehood that is ridiculously false.

I’ll leave you to find examples at the PolitiFact website which has a heading Pants on Fire, as well as one on People, which includes the score cards for, among others, Donald Trump, Hillary Clinton, Tim Kaine, Mike Pence and Barack Obama.

To date, PolitiFact has done 12,000 fact checks. Adair admits to some mistakes, everything from little ones, such as misspelling someone’s name or getting their title wrong, to big ones, such as making the wrong rating. Apologies and corrections are then in order. He tries to maintain non-partisanship by sampling as widely as he (and his team) can from candidates’ statements.

PolitiFact itself gets PolitiFacted and, yes, it’s a verb that’s been used by, for instance, Jeb Bush, Marco Rubio and Chris Christie.

In 2014 PolitiFact began pundit-facting talk show hosts, columnists and commentators. Adair discovered that cable television commentators are way more thin-skinned than the politicians about having their statements fact-checked.

Adair is now beta-testing a pop up fact-checker app you can download to monitor campaign speeches and debates. 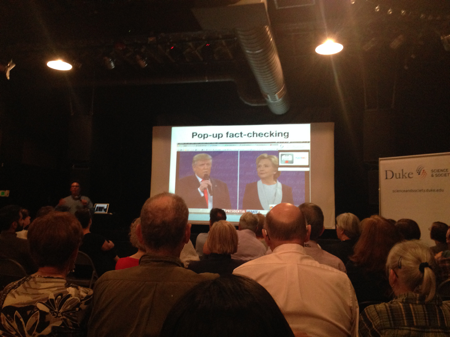 Of course it’s impossible to fact-check a new statement in real time. However, since candidates tends to repeat statements on the campaign trail or in debates, the app works for statements already fact-checked.

In sum, said Adair, “facts are the building blocks of a civil government. If candidates have complete disdain for the facts, we can’t have a functioning government.”