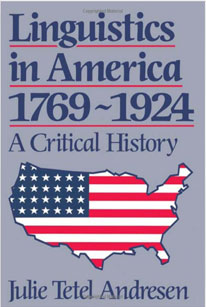 Julie Andresen proposes that three developments capture a significant portion of American linguistics activity. These are the study of American Indian languages, the emergence of a distinctive Anglo-American school of thought which has been accompanied by the defense of American English and the influence of European linguistic theories on American scholarship. Throughout the book the idea is developed that theories of language do not transcend the language in which they are written, and metaphors and images are uncovered that are particular to the American-language linguistic tradition.

Undergraduate and graduate students of linguistics will find this book ideal background reading. It will be particularly useful to all students of historical linguistics.