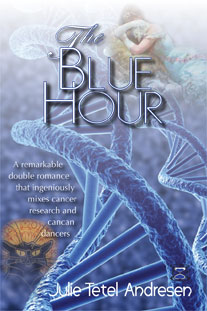 Cancer researcher Alexandra Kaminski and cancan dancer Jeanne Lacombe share a karmic connection – and Alexandra has to figure out what it is. But first this down-to-earth modern-day molecular biologist at Duke University has to come to terms with the possibility that reincarnation – of all improbable things – exists.

Val Dorsainville wants to regain control of Seine-Lafitte, the pharmaceutical company his great-grand uncle started a century ago in Paris. He knows he has the means of doing so with his low-cost and innovative home cancer test kit Test Early, Feel Safe. The problem is, he can’t seem to get the European patents for his product, and without them he can’t get the product on the world-wide market.

When Val comes to Duke University for business, he crosses paths with Alexandra. And funny thing, he suspects Alexandra of playing some strange part in his patent woes. But it makes no sense. She’s a nice Polish girl from Chicago. What connection could she possibly have to Paris?

Alexandra and Val are set on a collision course established the century before when she was a working girl in the Parisian neighborhood of Montmartre and he was an arrogant French aristocrat who saw what he liked and took it.

Can Alexandra and Val face the wrongs of the past and get it right this time around?