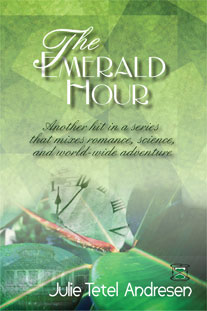 Botanist Jordan Charles is happy to travel from the North Carolina to London. She and her team have been awarded a plum grant to scour the grounds of Kew Gardens on the hunt for a rare species of fungus-resistant rubber tree that may well be archived there.

Londoner Theodor West is a rising star in Invensys, a high-tech company with global reach. Oddly, though, as soon as he meets the beautiful and free-spirited American botanist, his star begins to fizzle. The crazy idea that Jordan Charles is the cause of his troubles can only be dismissed as illogical. But no amount of reasoning can explain away the sudden visions he starts having, as if he’s stepping into another time and place … with Jordan Charles – or someone very like her – always there with him.

From London to Rio de Janeiro to Wilmington, North Carolina, Theo and Jordan are destined not only to cross paths but also to each independently entertain the possibility they knew one another in a previous lifetime.

But now what are they supposed to do about it? Theo’s career is at stake, and Jordan wants to save the world’s rubber tree forests. Their only choice: confront their karma.