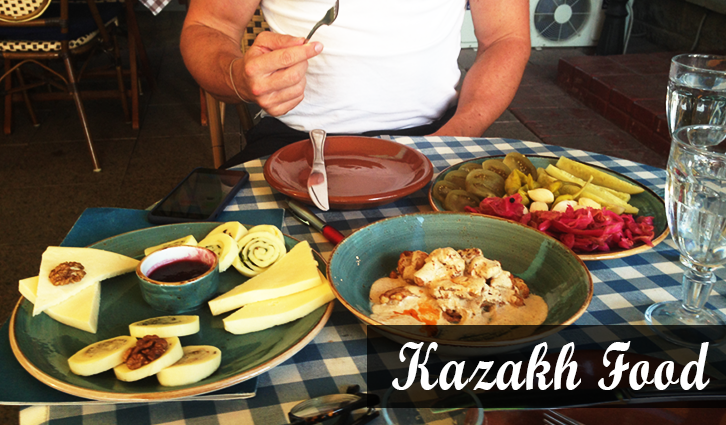 Out first night in Astana. We had good weather so we wanted to eat outdoors and then looked for Kazakh food.

Confession: the first night we chose a Georgian restaurant, the Daredzhani, not a Kazakh restaurant. In the middle of the table is a cauliflower dish with walnuts, to the back right a plate of pickled items and on the left a cheese plate with walnuts and a raspberry dip.

Gotta love the Georgian alphabet at the bottom of the bottle: It’s called Mkhedruli or, sometimes, Round Script. It is certainly distinctive

But now on to Kazakh food. It can be summed up in one word: meat. I can be more precise by saying: horse meat. You’ll note the next item on the menu after the Genghis Khan Plate is the horsemeat beshbarmak, the national dish: The name means besh ‘five’ + barmak ‘fingers.’ You eat it with your hands. (For anyone who knows Kazakh ‘five’ is really bes. Some phonetic change has occurred in the pronunciation of the dish. These things happen.)

I am not much of a meat eater and so didn’t try the horse. And despite the heavy part meat apparently, plays in Kazakh food, I had no lack of things to choose from. Vegetables are plentiful and varied.

For lunch, after our first language lesson we chose a Kazakh restaurant, the Dastarkhan. The sign on the door says: Due to Ramadan alcoholic beverages will not be served

Among other things, I had Uighur tea. It’s milky and salty and served tepid. I liked it

Ethnocultural note: the Uyghurs are a Turkic ethnogroup, most of whom live in the Xinjiang Uyghur Autonomous Region of China.

I offer this page from Dastarkhan menu because I thought it was, at least, interesting: I was intrigued that the warning at the bottom of the page about destroying property was followed by the exhortation to enjoy your time in the restaurant. Is destroying stuff expected and part of the enjoyment? I doubt it, but the juxtaposition captured my imagination.

Another time we went to a Russian restaurant, the Griboiedov Underneath the neon signs are the words Мейрамхана (Meiramkhana) and Ресторан (Restaurant). The first is Kazakh for ‘restaurant’ and the second Russian

We liked the waiter a lot and the food well enough to return a second time. You get a bit of the sense of the interior of the restaurant. Comfortable couches pulled up to tables.

We also liked the Georgian restaurant well enough to go to it in Almaty. I don’t know to what degree it is a chain. The interior is homey and comfortable. I love all their dishes with pomegranate

Back to Astana. Gulzhan, a young woman who works at the Marriott, offered to take us on a tour of Astana. She took us first to a charming craft market. The wares are displayed in what look like half-yurts, which are called kizi. The food point here is that Gulzhan then took us to the oldest grocery store in Astana, a late 19th-century beauty, an emporium of Kazakh food: Downstairs there are long cases with beautifully displayed food. Here is an endless line of pastries, cakes and candies: I always wonder who buys all this. It’s made fresh every day, so somebody is! The signs says Shyzhyk, apparently a classic of Kazakh cuisine – I didn’t try it, so I can’t comment

I don’t usually get perturbed by the mangled English I regularly see on menus and signs all over the world. Making fun of the mistakes is also a cheap shot because I know how many mistakes I’m likely to make in a target language. Nevertheless, at the Chicago Pâtisserie de Paris (already trying to process the name) at the Astana Airport, this gem caught my attention: To the question, “Hey, wanna make some creeps?”

My answer is unequivocally, “Let’s!” 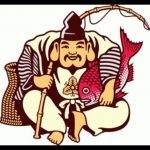