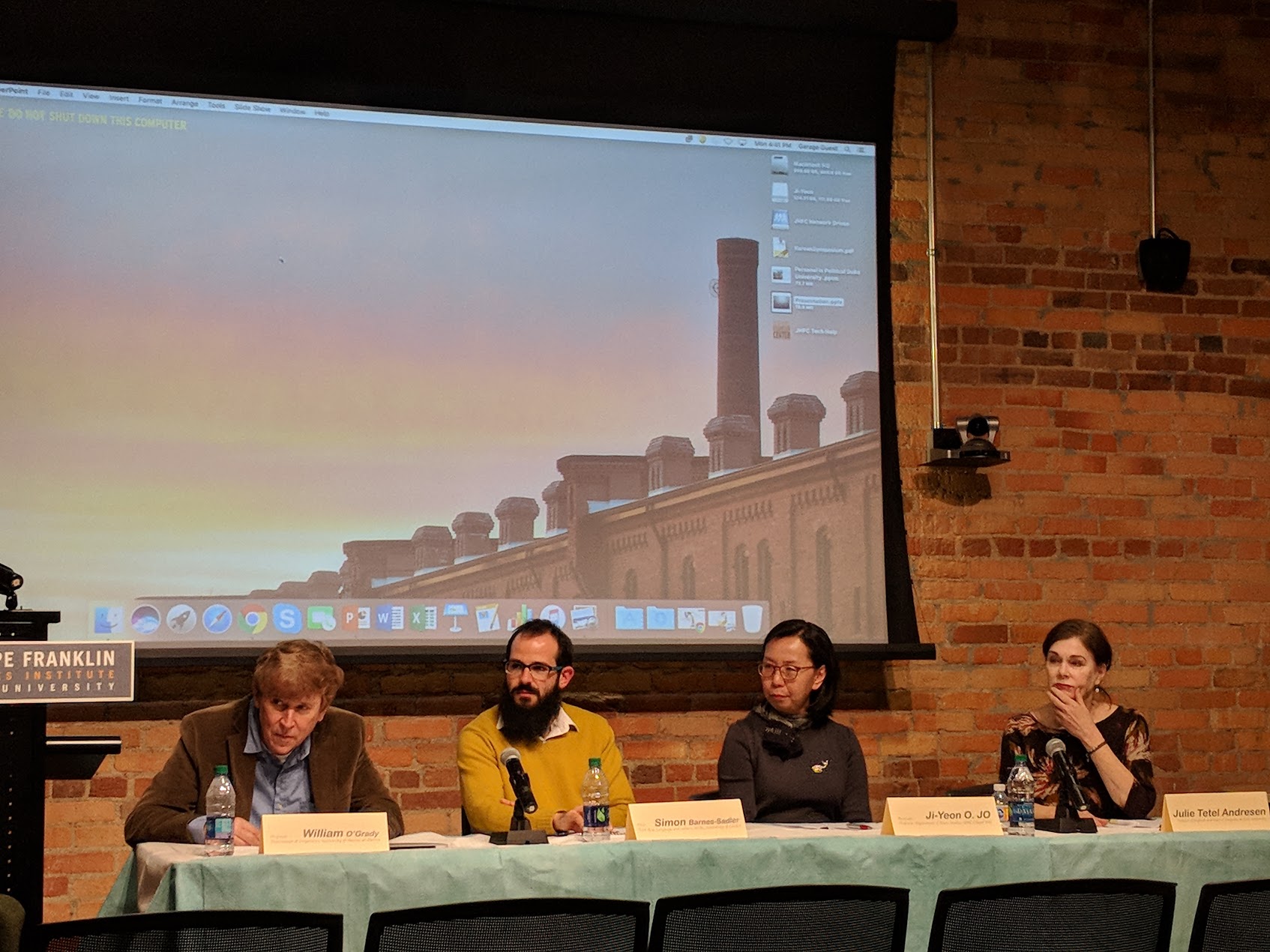 On Monday March 26 Hae-Young Kim, the Chair of Asian and Middle Eastern Languages at Duke University, organized a symposium on the Korean language. It was entitled “Politics of language and identity: Korean speakers in the peripheries of the national and transnational.”

In the title photo you see, from the left, the three speakers: William O’Grady, Simon Barnes-Sadler and Ji-Yeon O. Jo. I was the discussant on the right, looking pensive.

The image on the screen behind us is the roofline of Smith Warehouse where the event was held. Smith was once a tobacco warehouse and is now a Duke University building. The old brick is beautiful.

All three speakers were amazing, and I learned a lot. 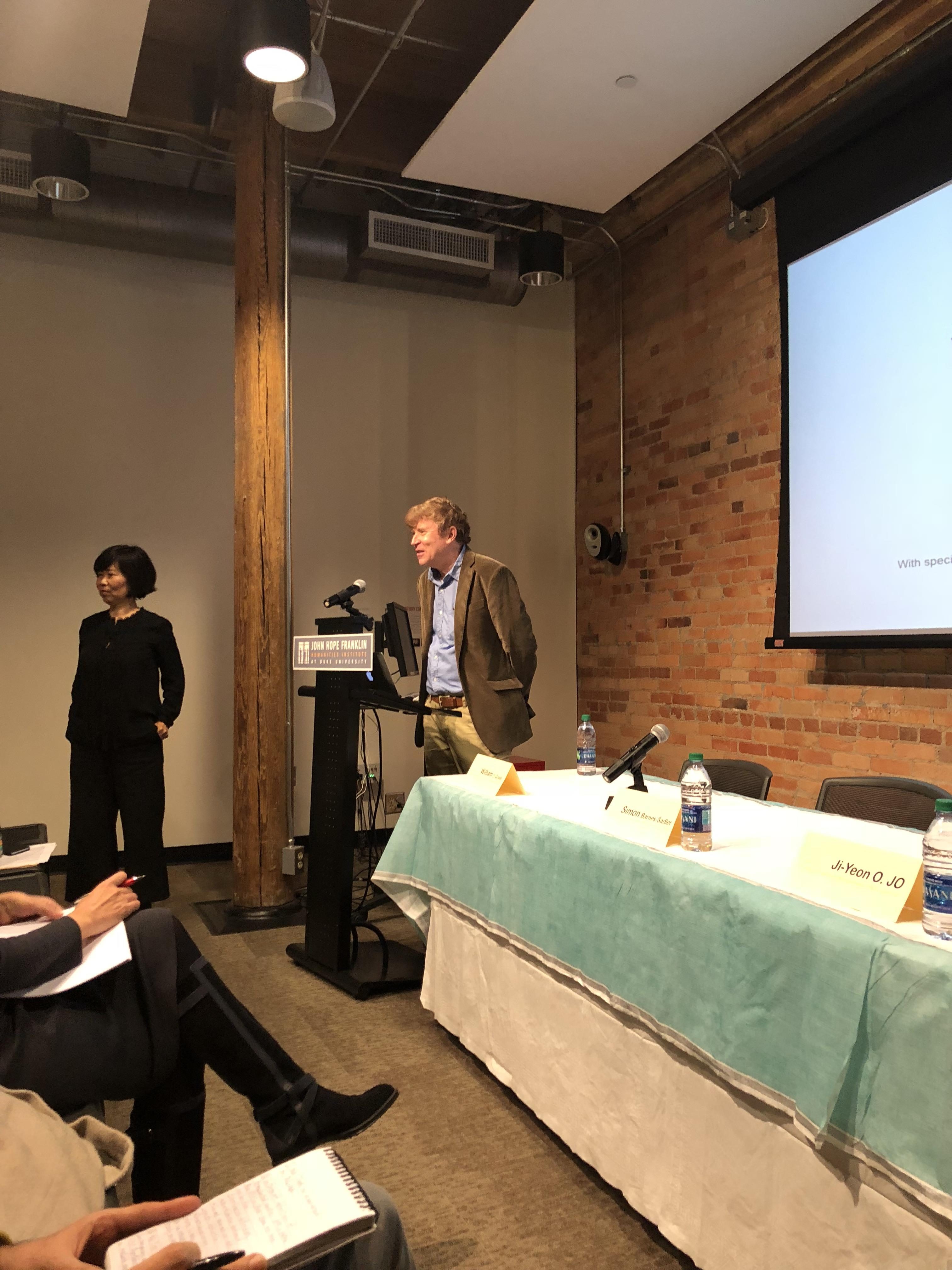 William gave a fascinating paper on the endangered language Jejueo, spoken on Jeju Island off the south coast of Korea. 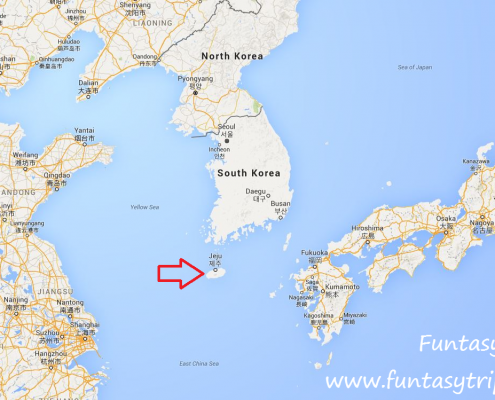 Over the centuries Koreans who have visited Jeju Island have noted that the variety of Korean they speak there is not mutually intelligible with peninsular Korean. The problem of protecting it as endangered today is hindered by the very strong one nation, one language ideology prevailing in Korea.

The idea is that the Korean people are unified by one language, and if people acknowledge Jejueo as a separate language, the long-held belief about a linguistically unified Korea and Korean people would be disrupted.

Despite his best efforts, William has not yet been able to convince his fellow linguists in Korea to advocate for the separateness of Jujueo and the need for its protection.

Moral of the story: Ideology often trumps obvious facts on the ground.

Jeju Iisland is known, among other things, for these statues: 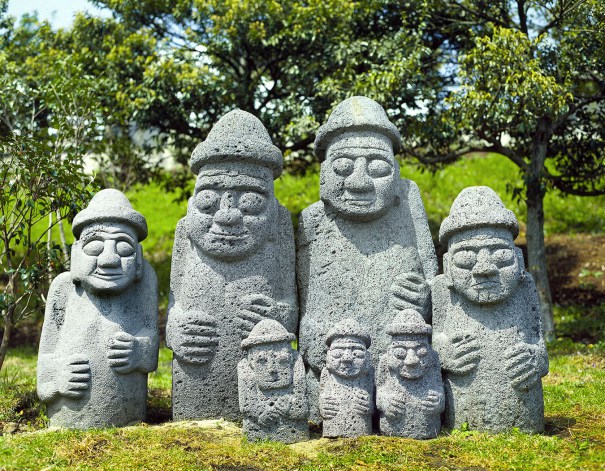 From everything I have now seen and researched about the island it seems like an amazingly beautiful place. I’m tempted! 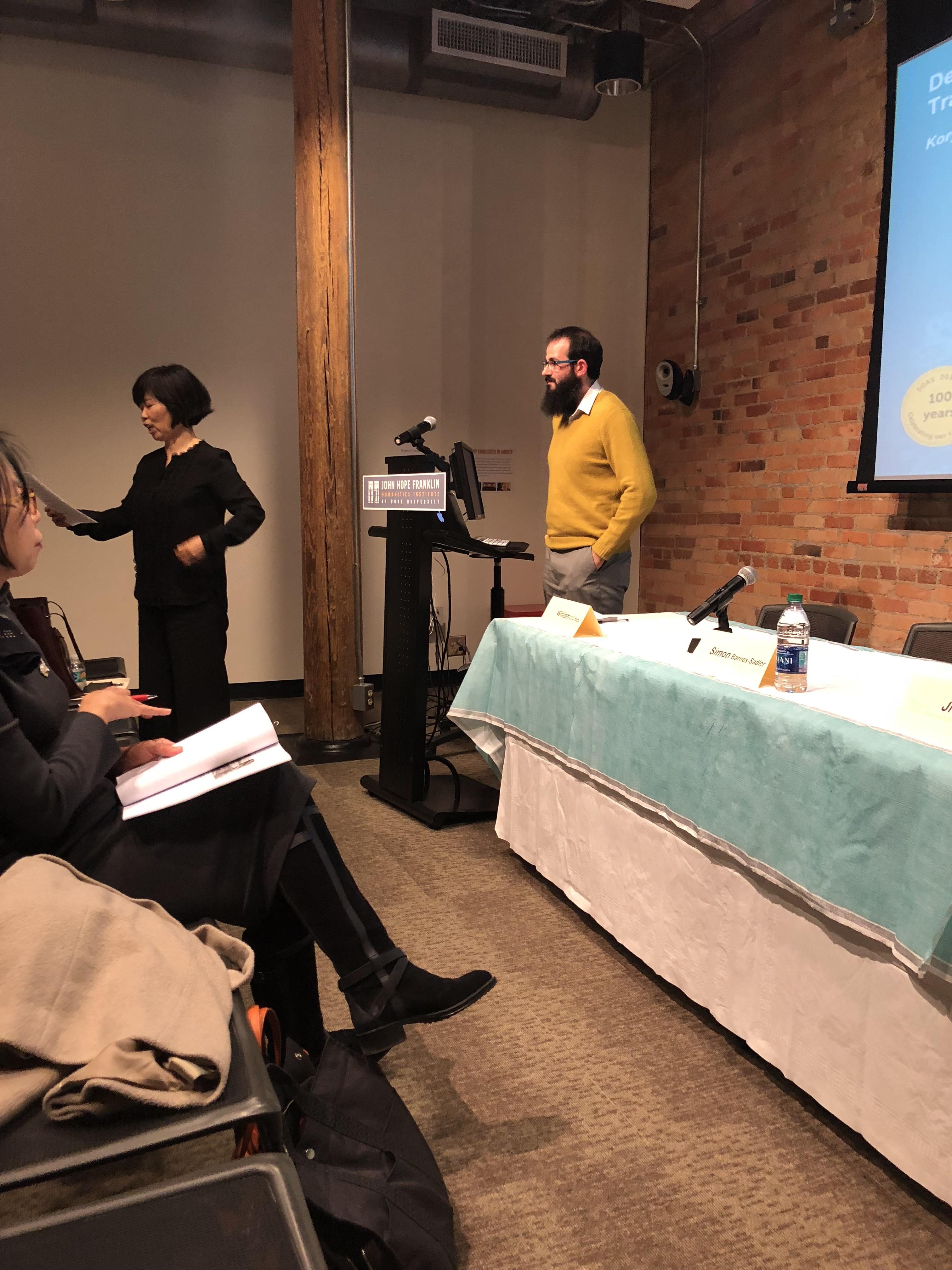 Simon outlined some of the grammatical differences between two varieties of Korean spoken outside the Korean peninsula:

VYK is spoken in the Yanbian Korean Autonomous Prefecture in Jilin Province in China which shares its southern border with North Korea’s northern border. In this prefecture Korean is the language of instruction in schools.

However, Simon pointed out that the language situation isn’t as Korean-dominated as one might think. He showed us this street sign: 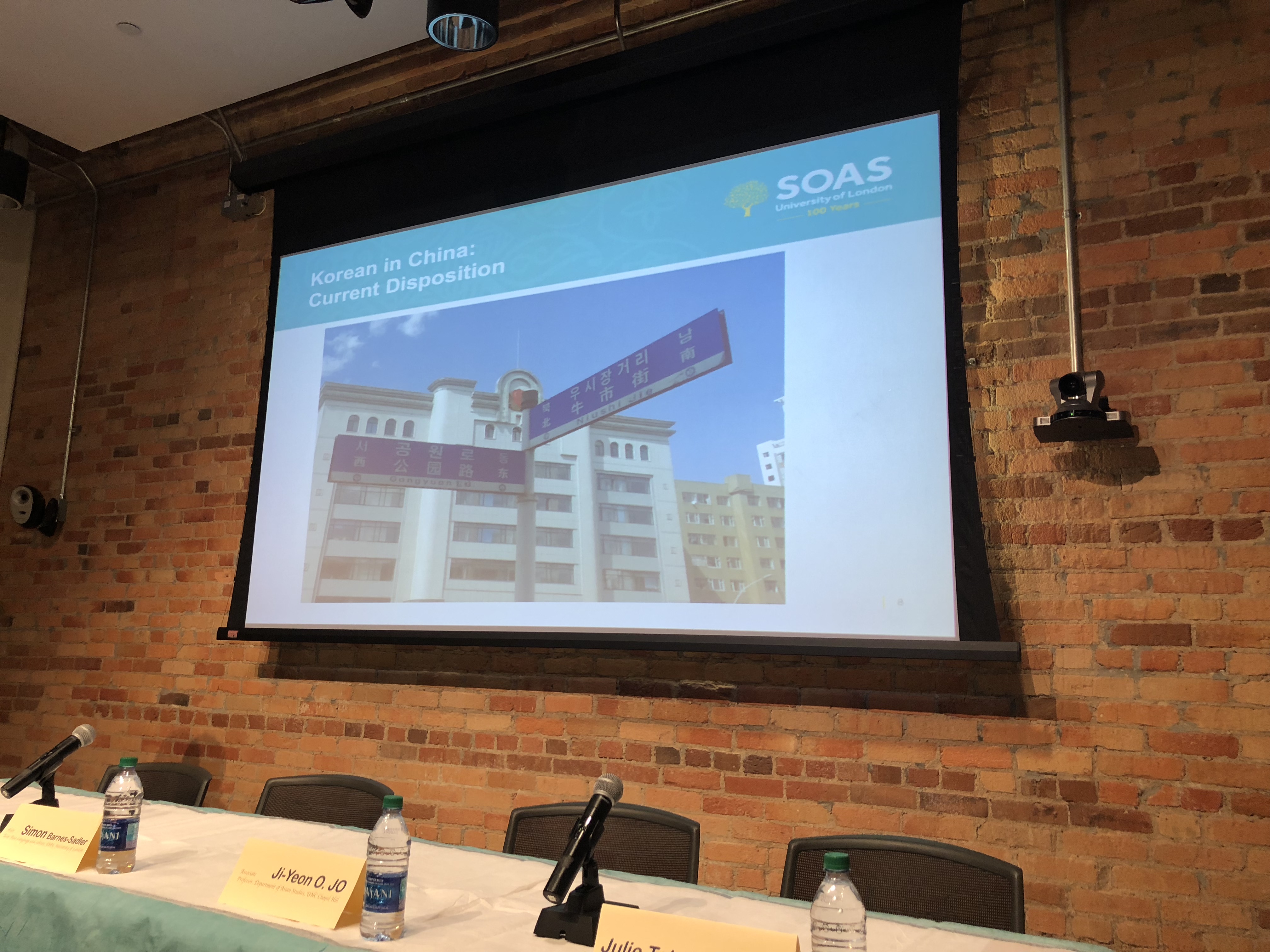 Simon is an extraordinary linguist. His command of both Standard Korean and then these diasporic varieties which have Russian influence in Kazakhstan and Chinese influence in China is astounding. 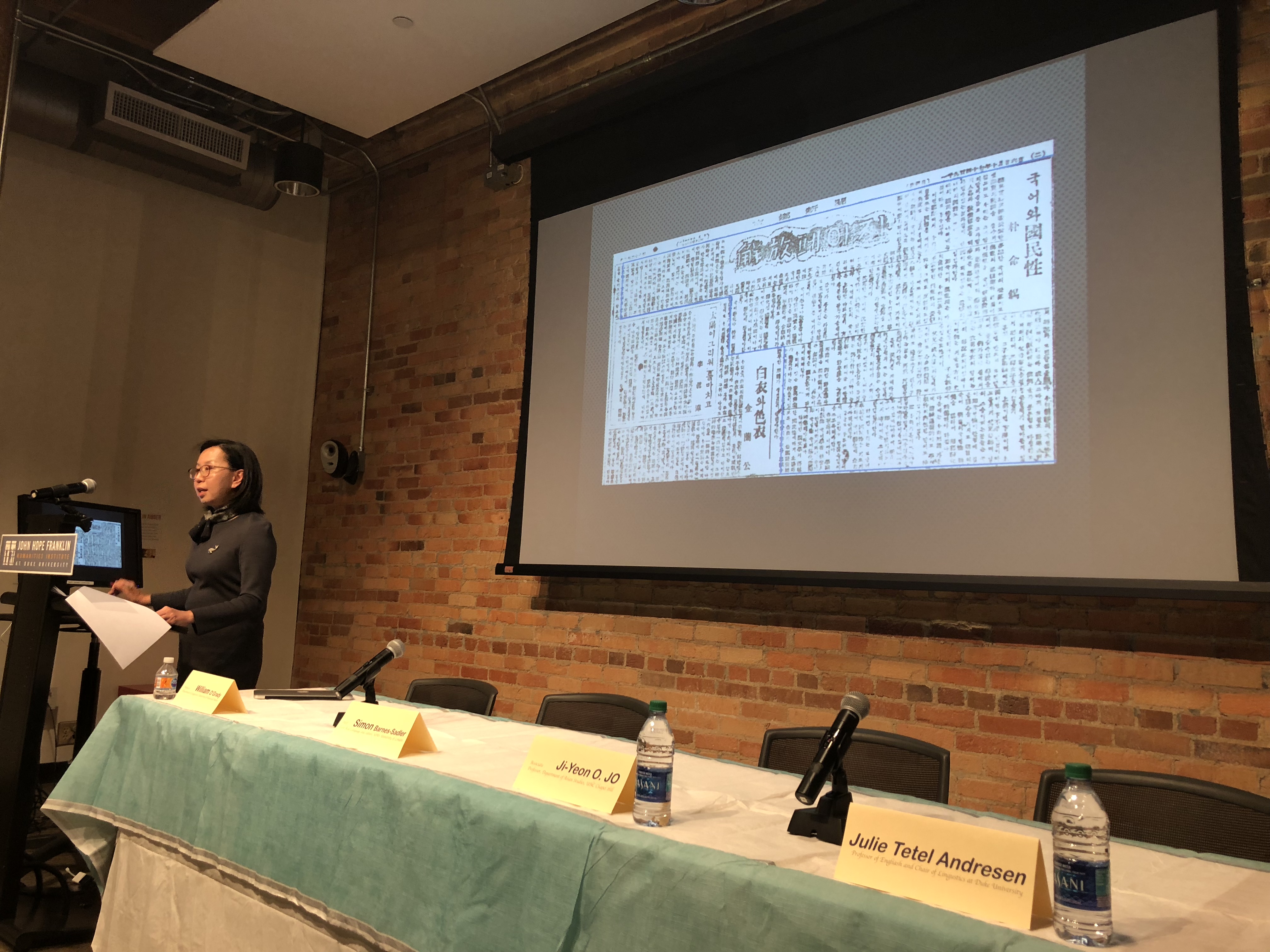 Yet another incredibly fascinating talk. Ji-Yeon interviewed ‘legacy migrants’, 2nd-, 3rd- and 4th-generation Koreans who have returned to their homeland to live and work.

Ji-Yeon interviewed, among others, Korean-Americans who were humiliated because their level of Korean was not considered good enough by native Koreans. They might also be criticized for speaking English, even though global English is very much present in everyday Korean life.

She presented a well-researched and nuanced account of the language situation for Korea in general and for legacy migrants in particular.

What was I doing there as the discussant, you ask? As the speakers were giving their talks I wondered myself, because I am not a Korean specialist – not even close.

However, I think it’s precisely because I’m an outsider that Hae-Young invited me to offer my outsider’s perspective: to ask questions against the backdrop of what I know about the one nation-one language ideology in the West; to inquire further into the kinds of things that happen to languages when they move into new spaces and have contact with unrelated languages; and to engage with the emotional issues that always swirl in and around matters of language.

Congratulations to Hae-Young, not the least for putting together a symposium that attracted a great audience: 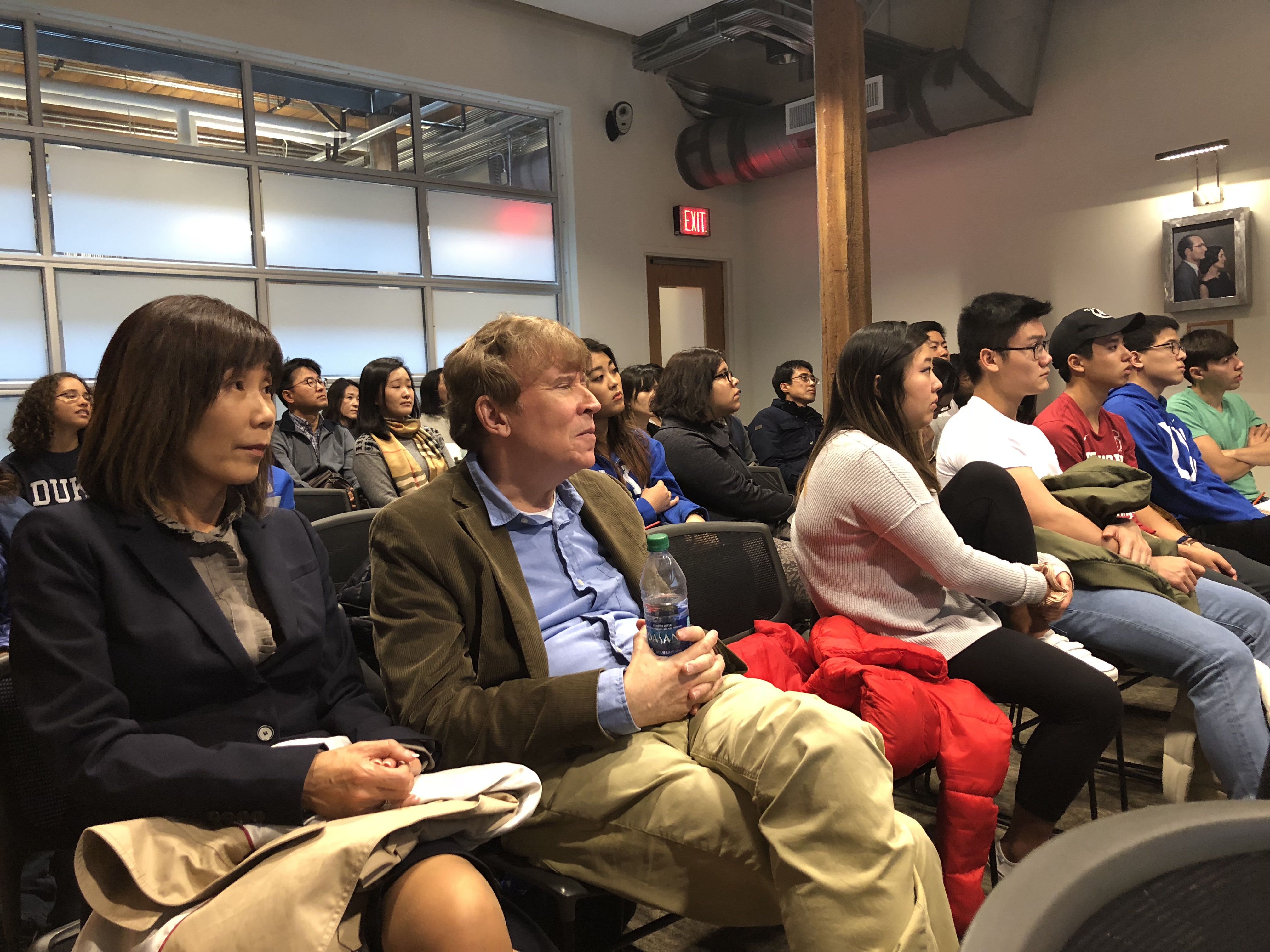 I met a lot of wonderful scholars and had a great afternoon and evening. Thank you, Hae-Young!

See: More photos from the event

See also: My Blogs on Languages