Title image: Milford Sound. Just to the left of center is Mitre Peak, so-called because the top resembles a pope hat.

The southwest coast of the South Island is a series of fjords. You can get to one of the main ones, namely Milford Sound (misnamed as a sound), one of two ways: a 5-hour bus trip around the mountains or a 35-minute plane trip over the mountains. When Phillip and David first proposed we take the plane, my immediate response was,”You go along. I’ll be happy to stroll around Queenstown.”

But when it came time to sign up for the trip and after repeated assurances that Air Milford had a 100% safety record, I fell in with the plane-ride plan. 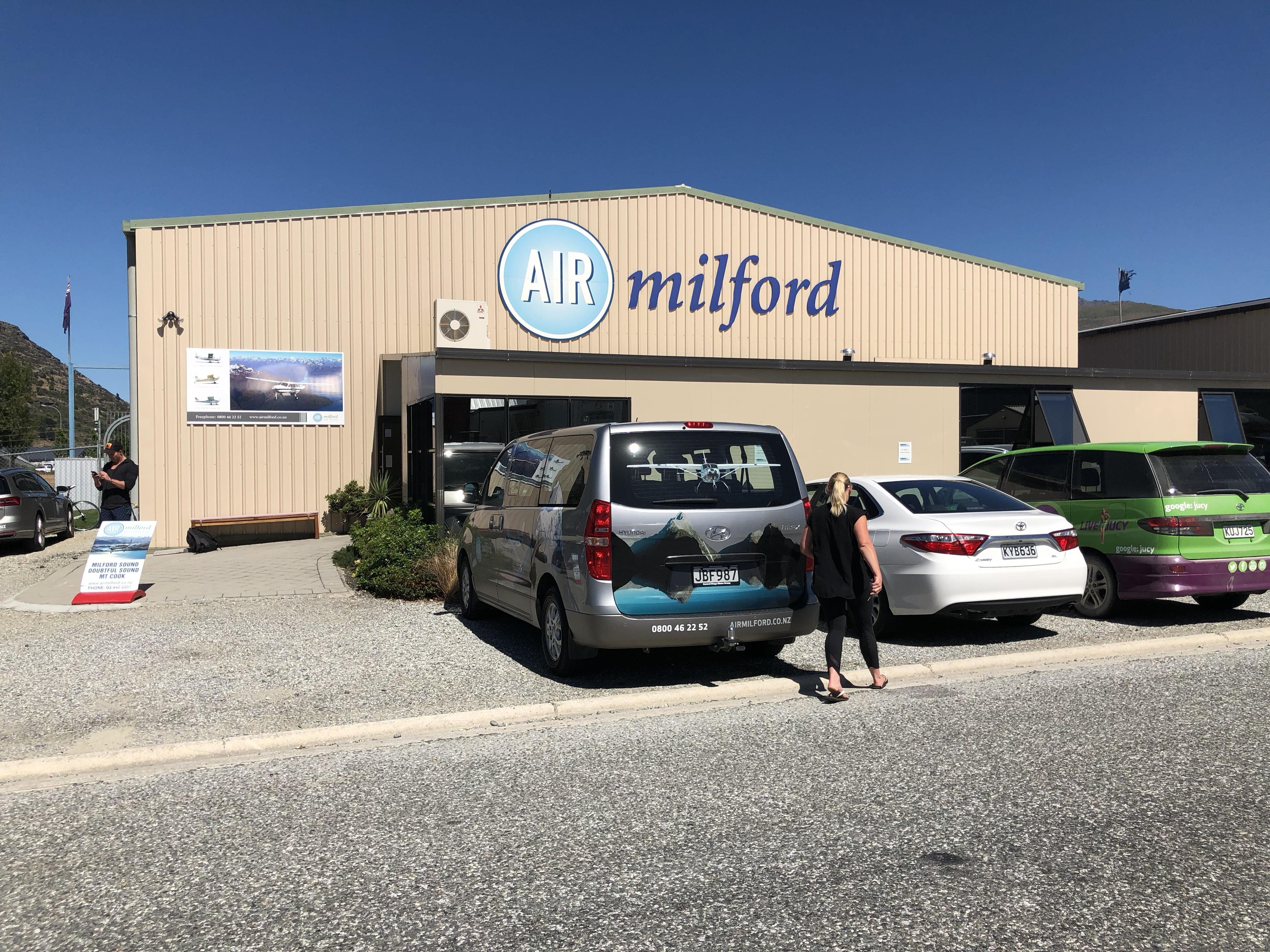 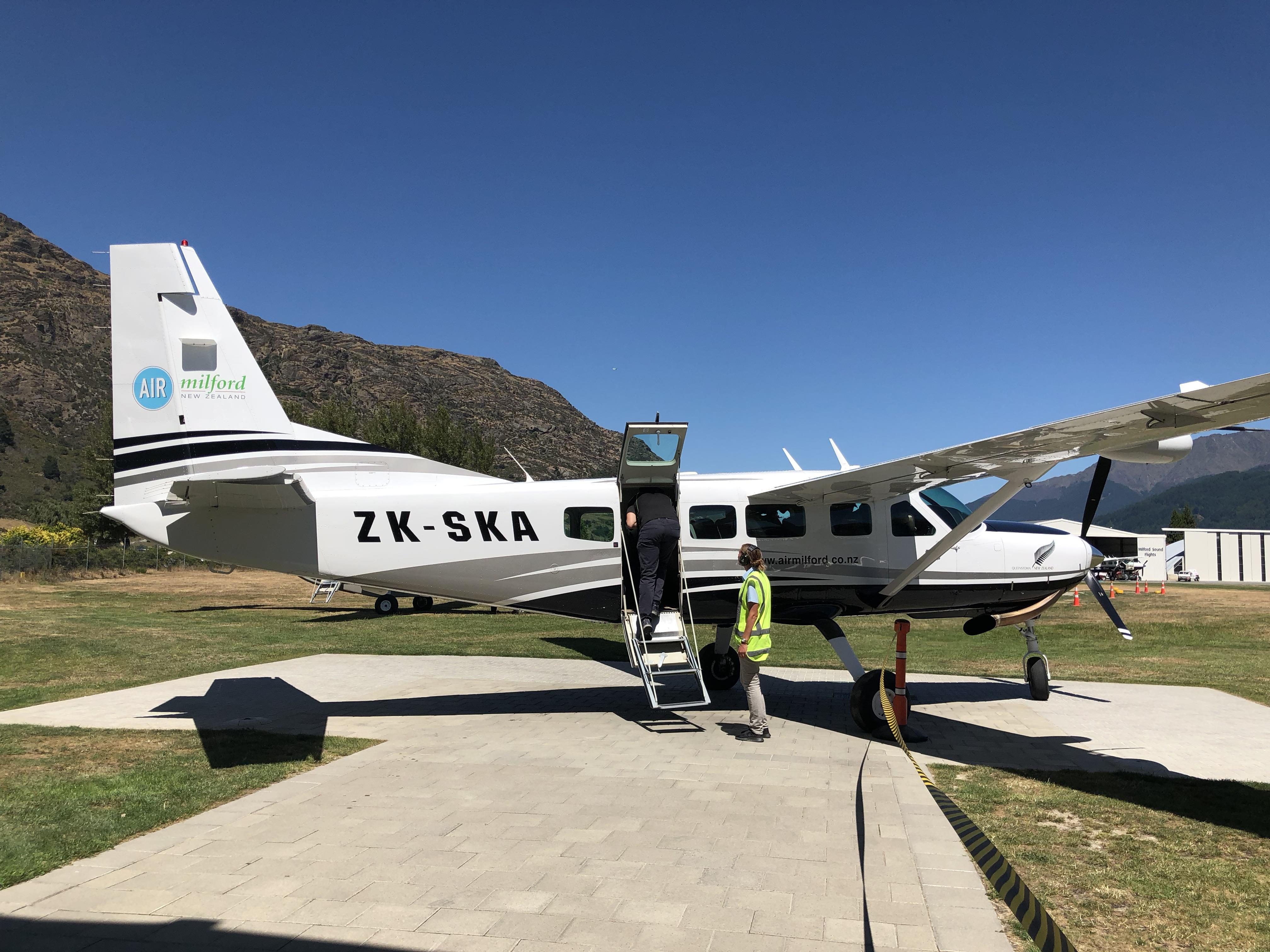 … because we’re going in this 10-person Cessna.

We’ve been told that the day is great for flying. Because there is so much rain in this part of the world, Air Milford flies only about 250 days a year. So we’re … lucky? 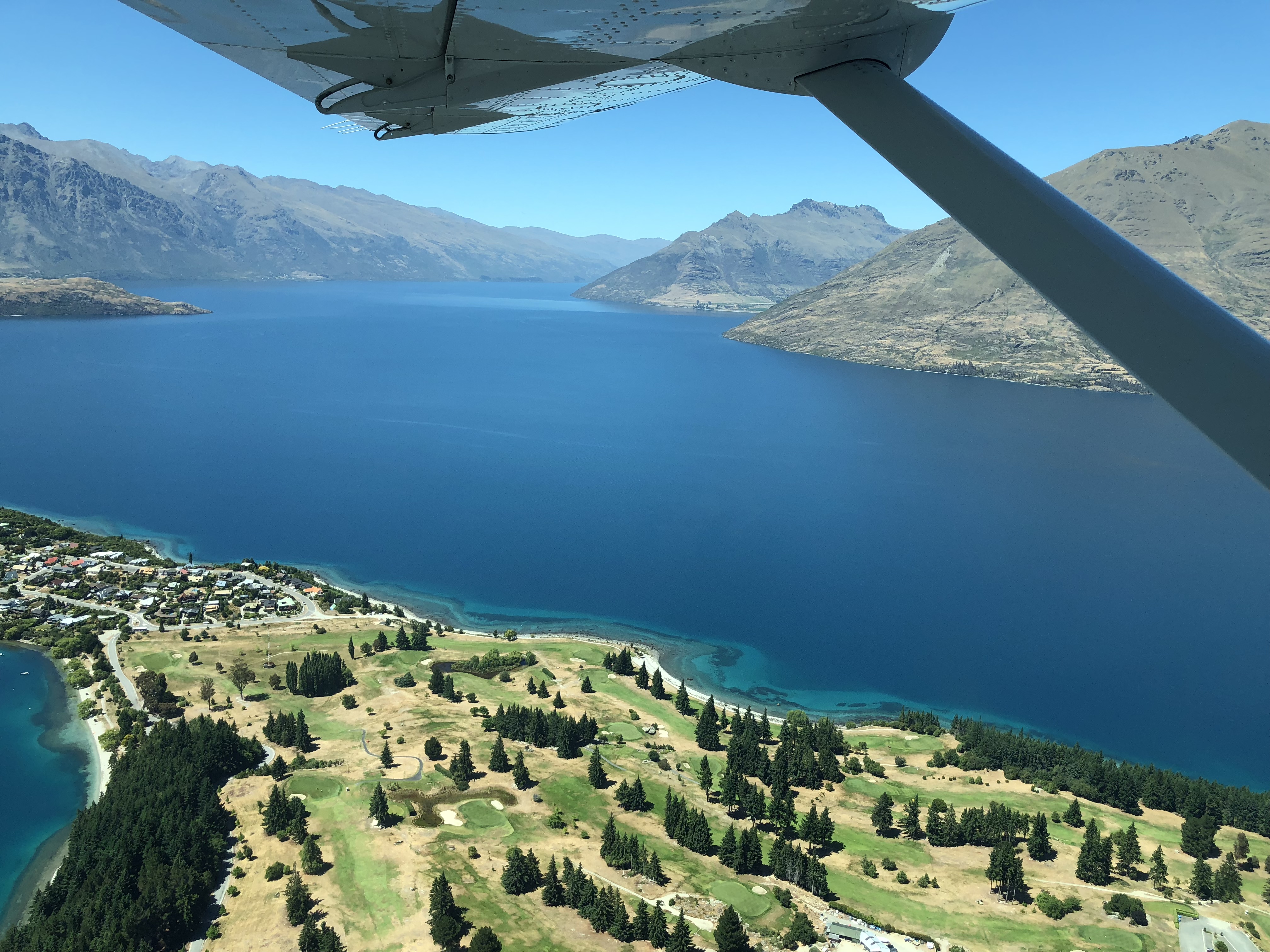 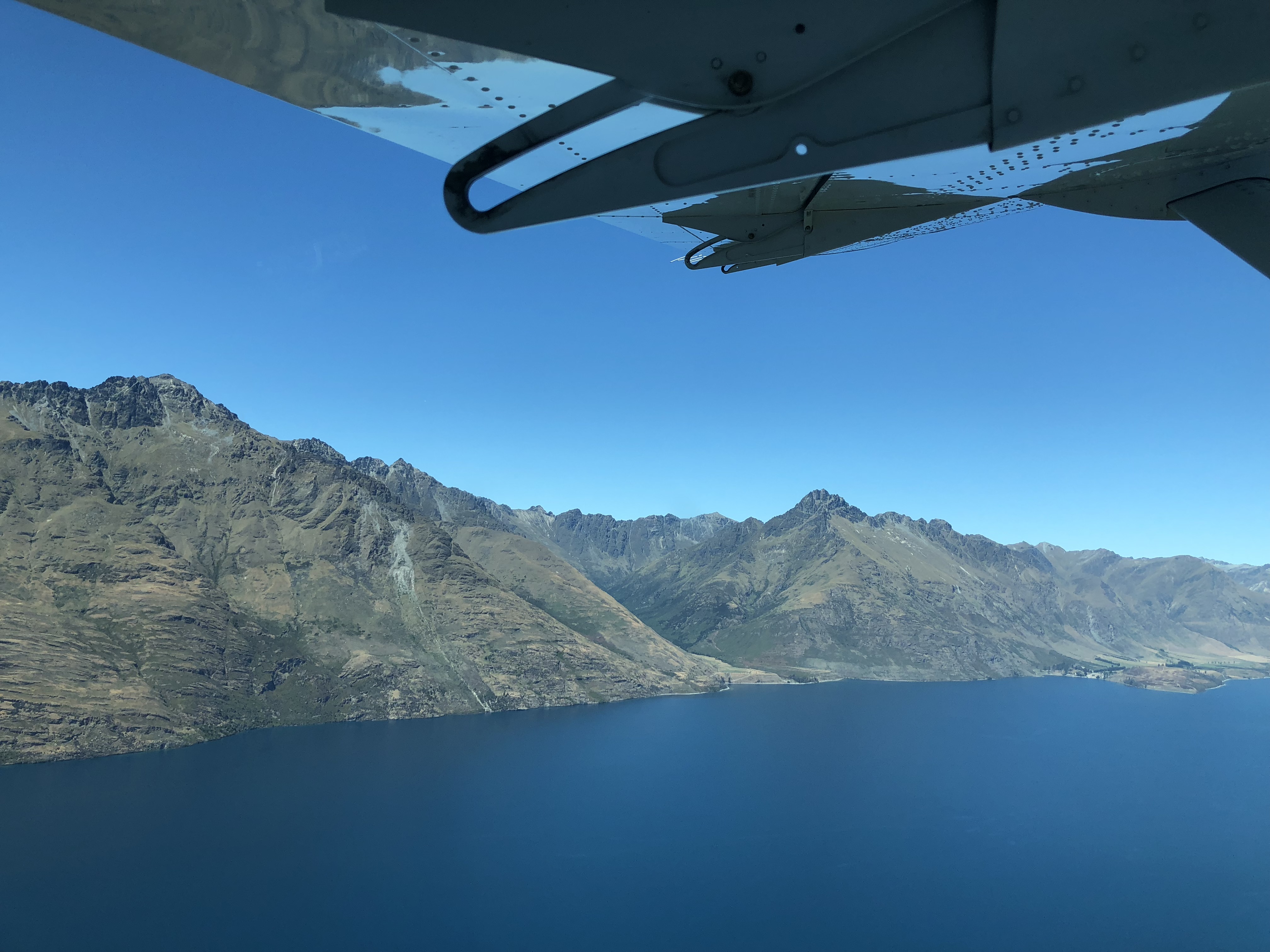 Okay, I will not lie. The flight is bumpy. But, hey, there’s magnificent scenery 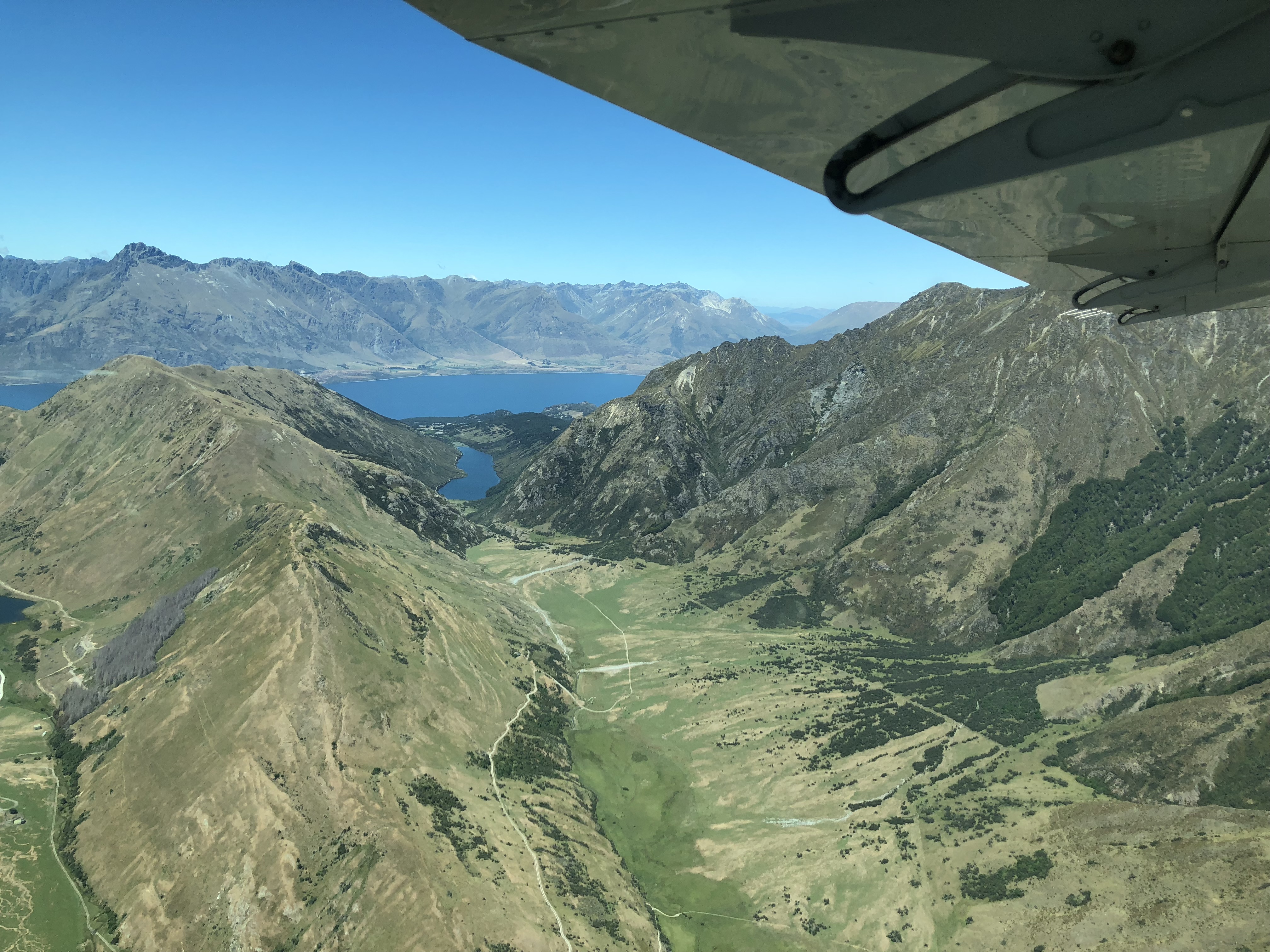 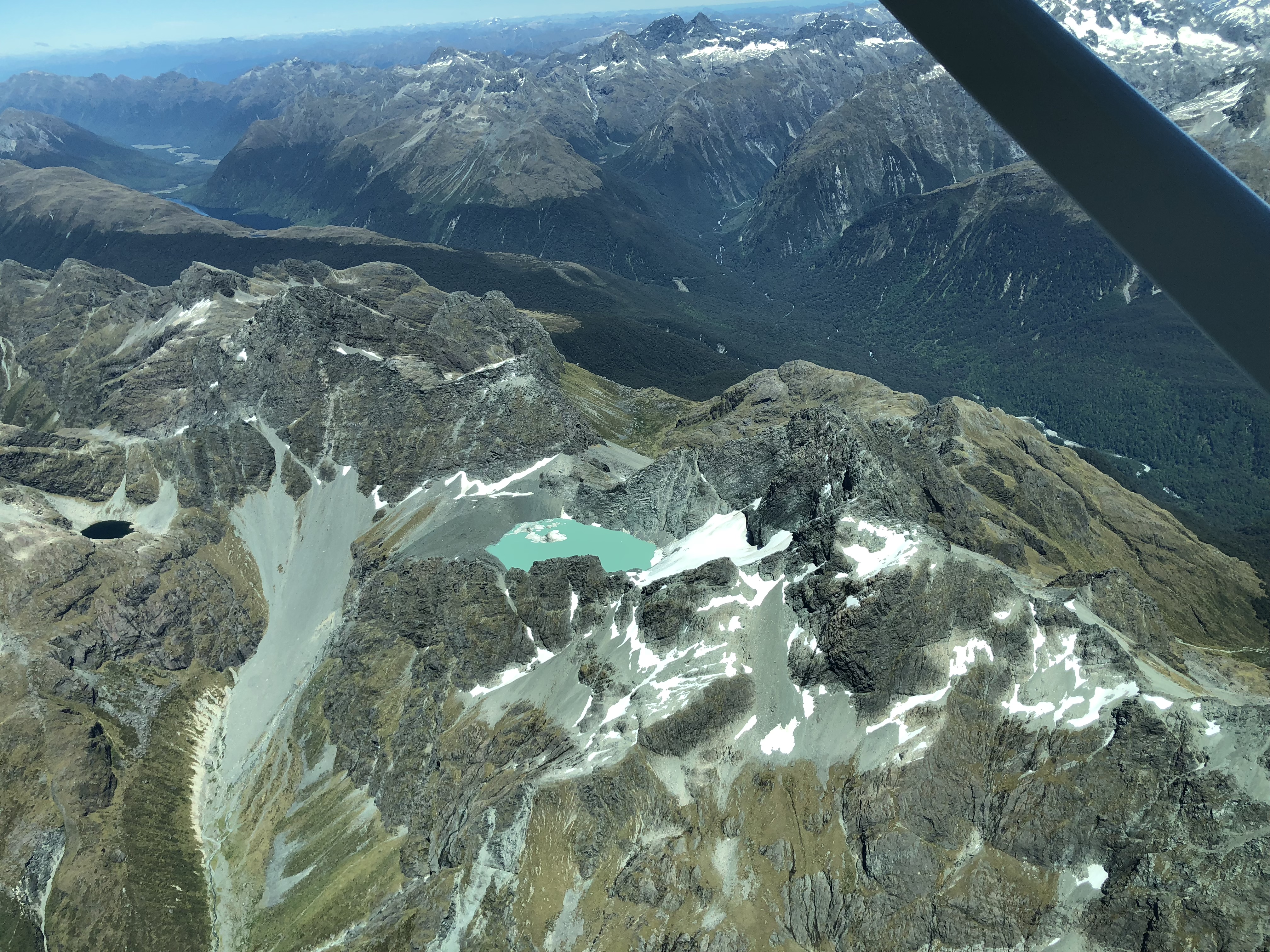 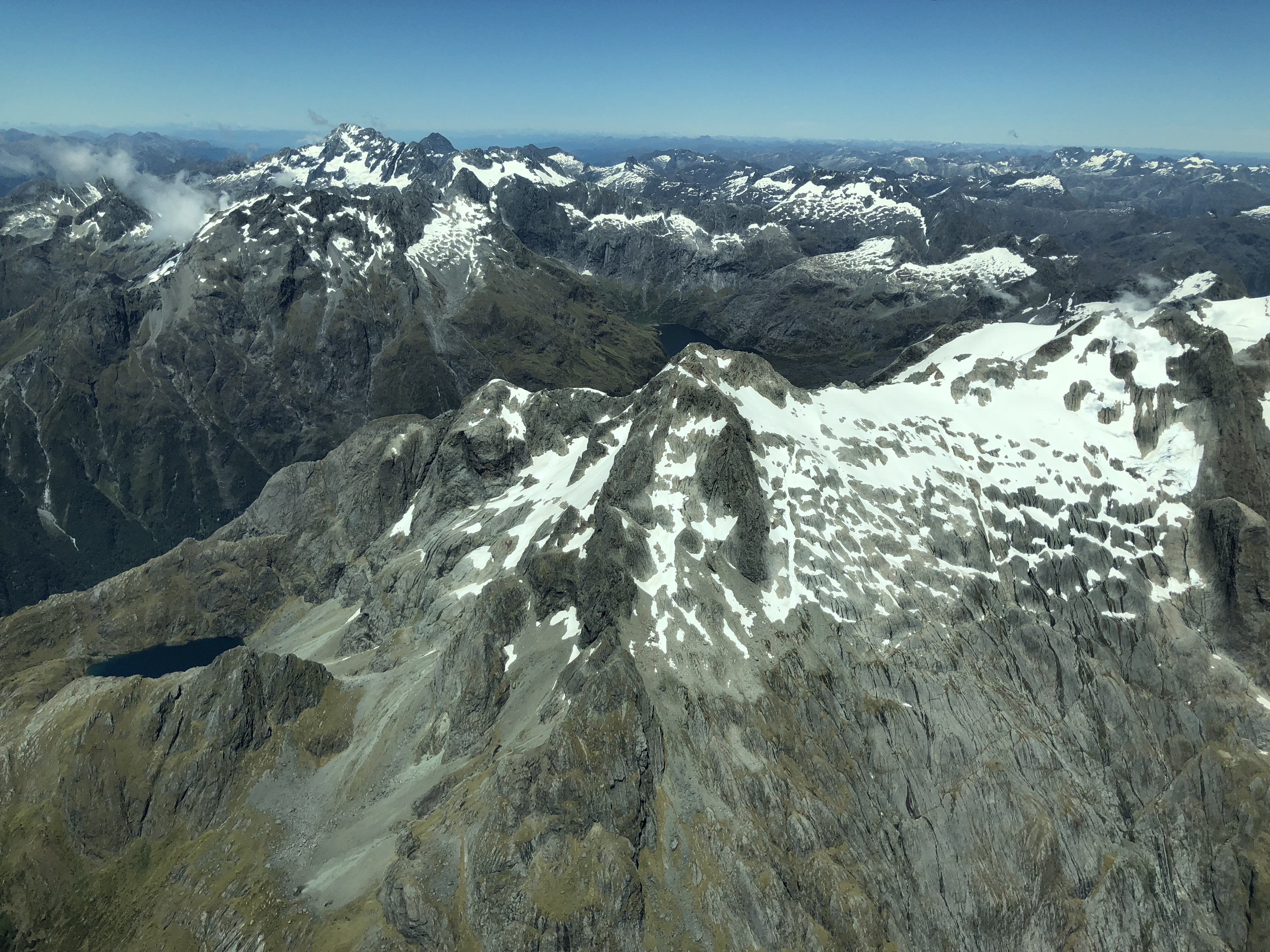 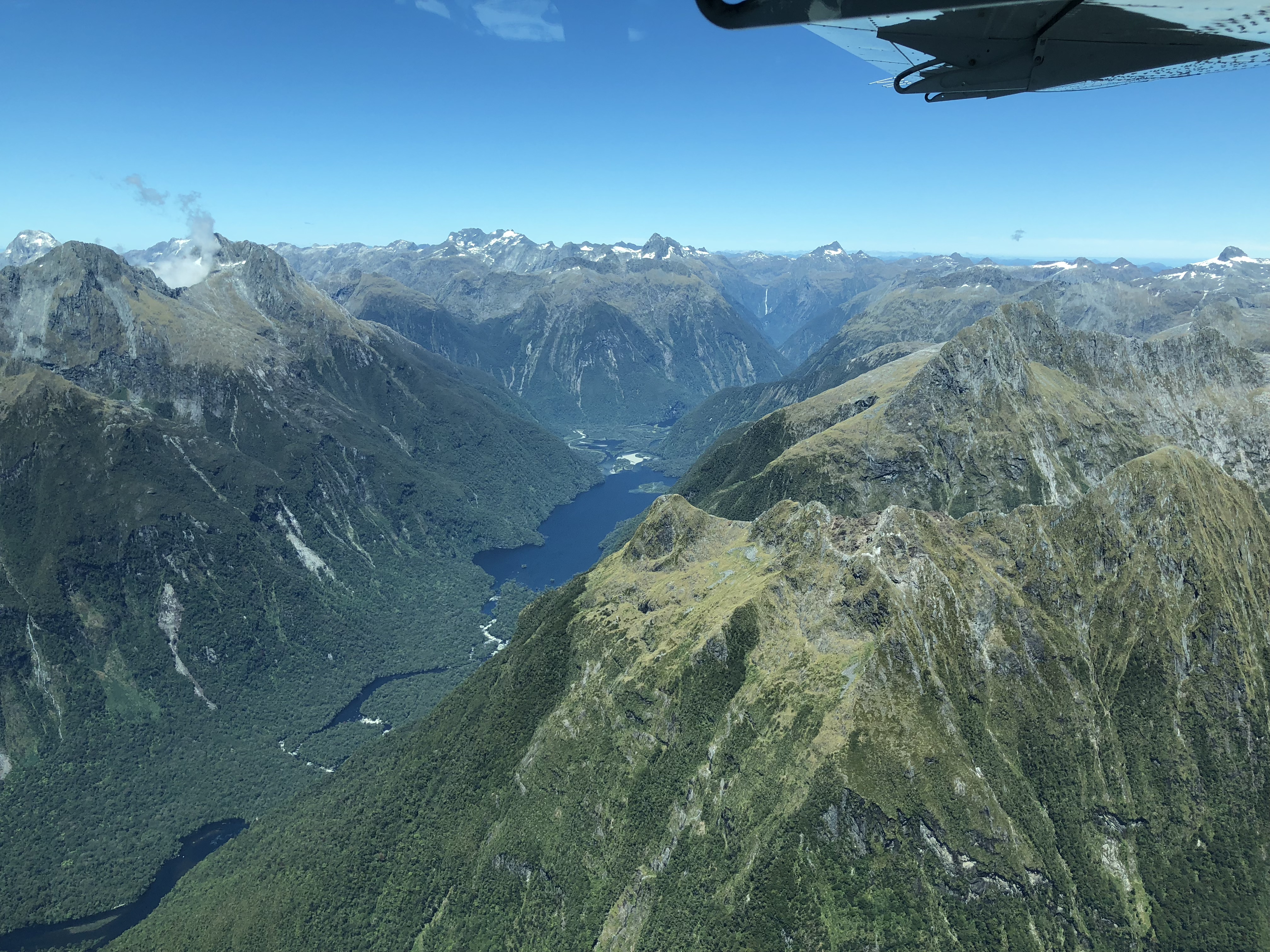 BUMPY – AAARGGGHHH! Get me off this thing!! 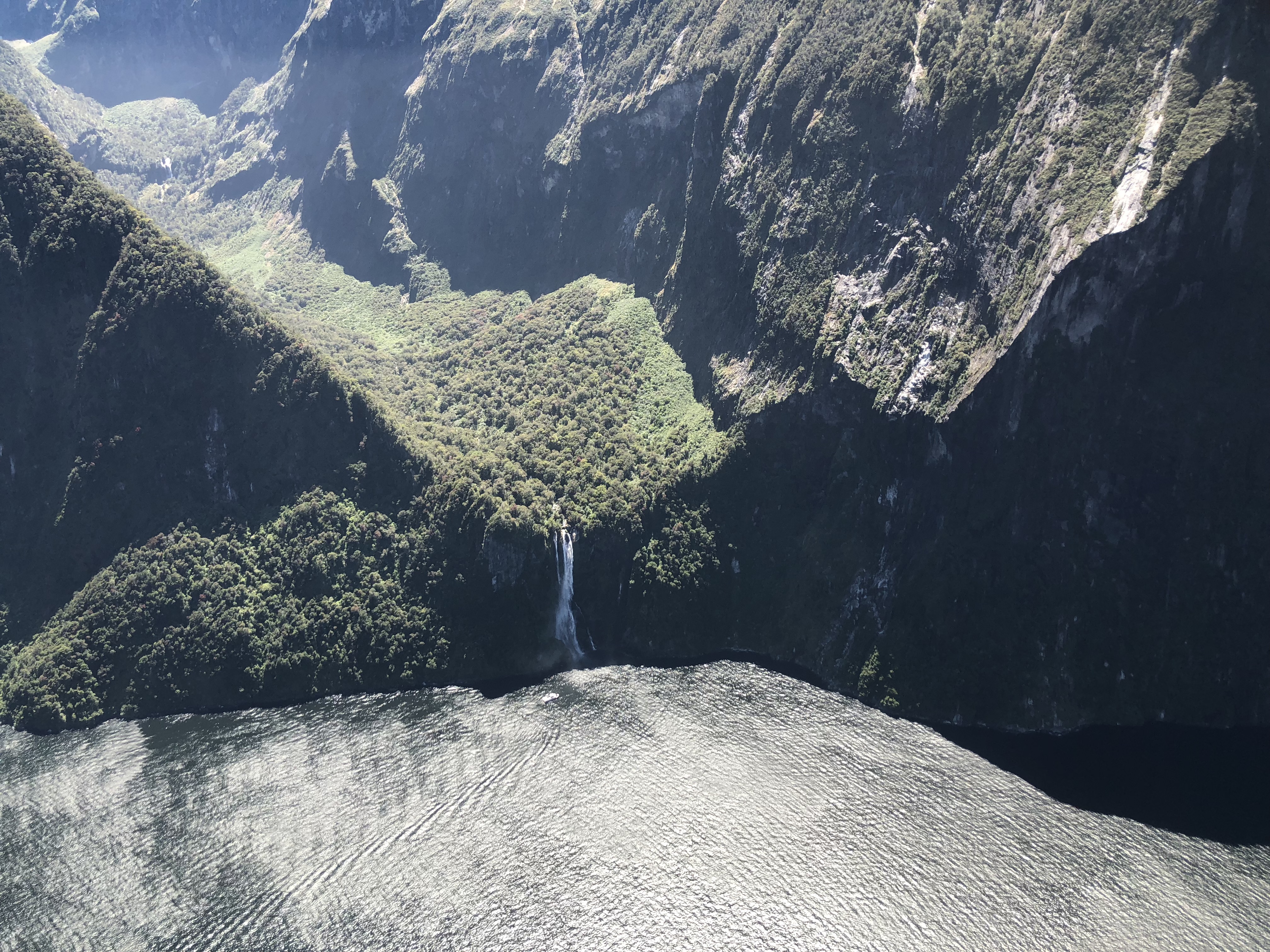 No, really, GET ME OFF THIS THING. Oh, blessed relief, the runway comes into view to the right. 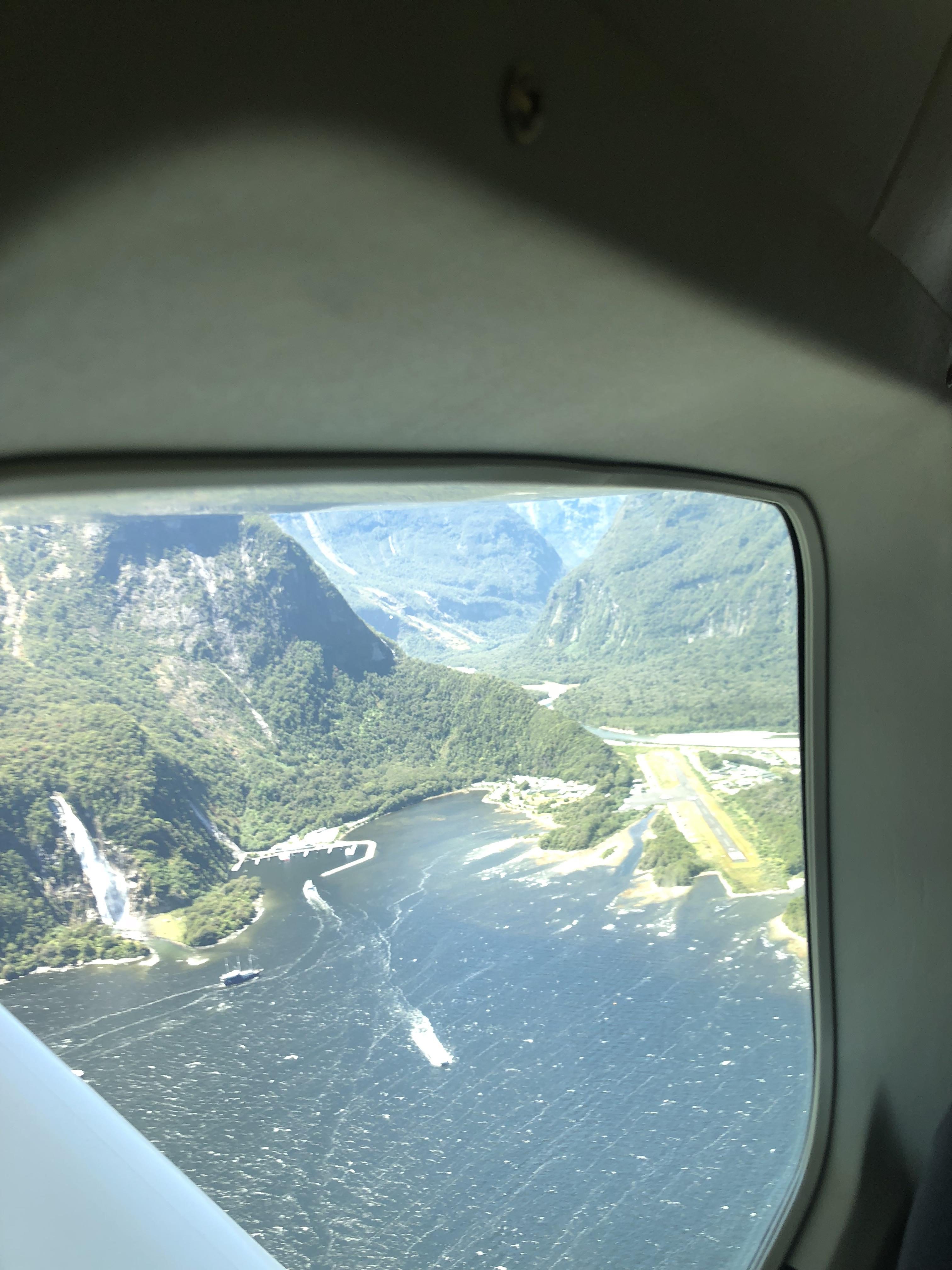 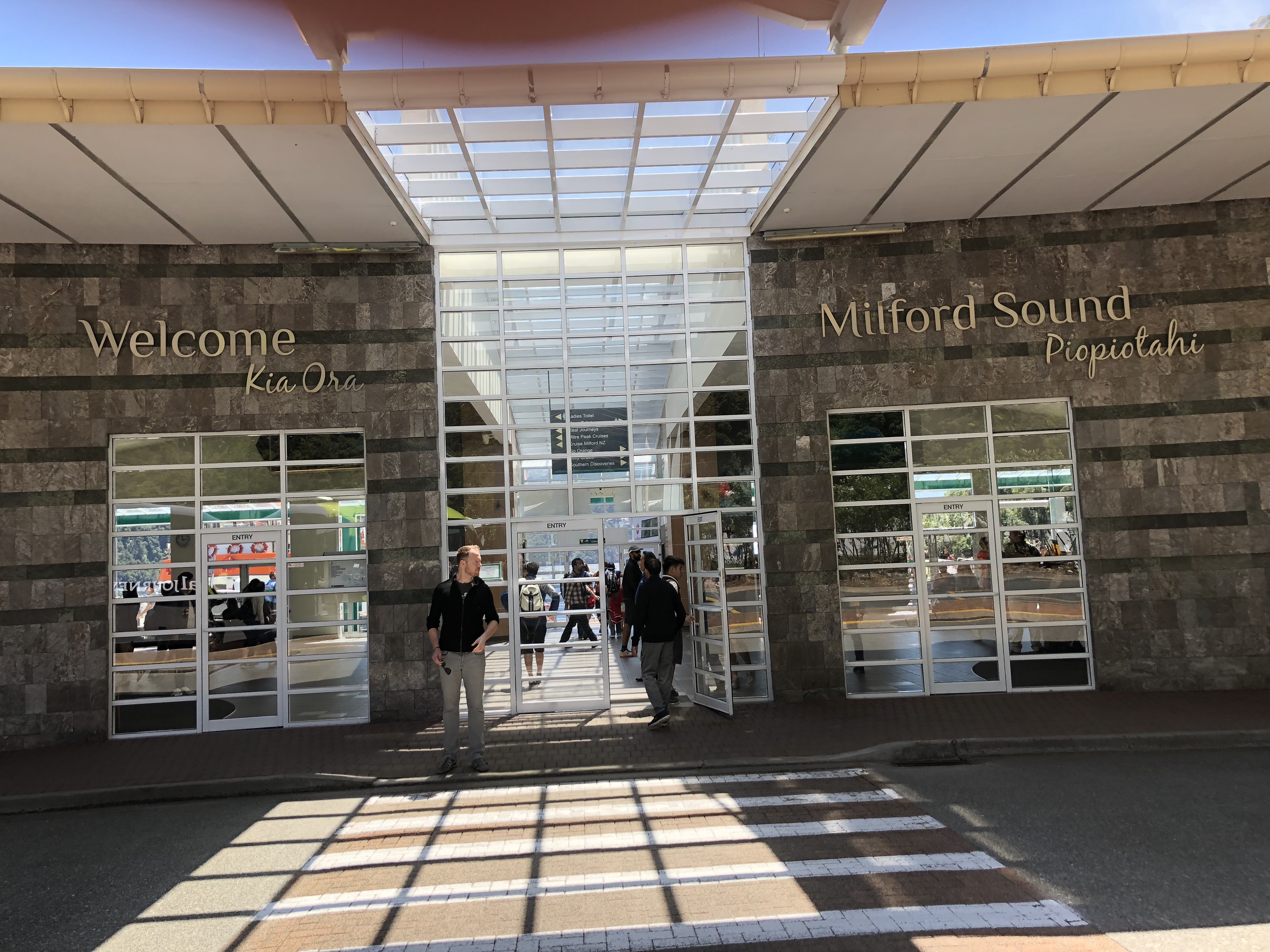 The cruise boat. We’re in for a two-hour round trip to the mouth of the fjord.

We board and immediately put on the feed bag 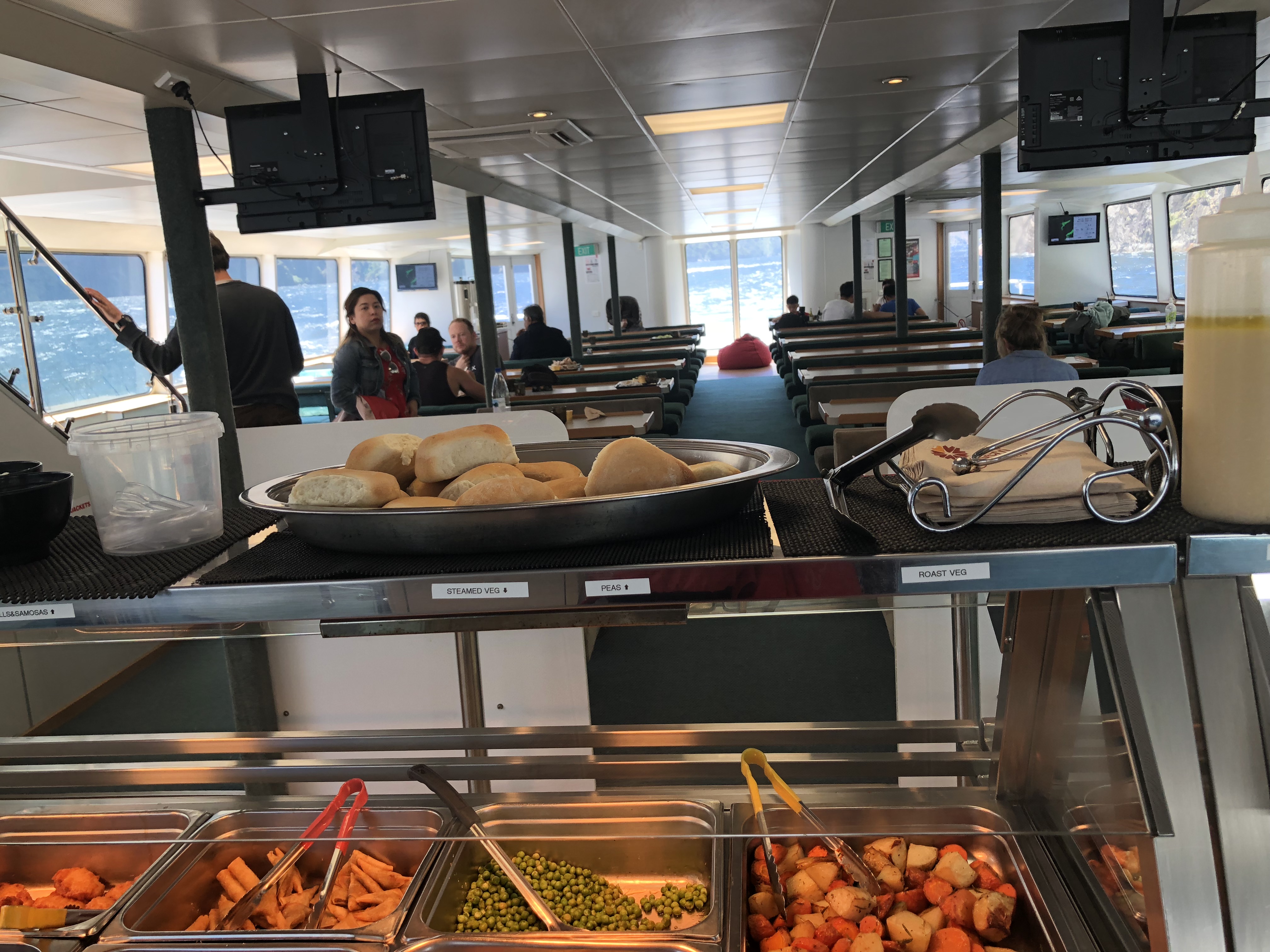 All over the world, what do we humans do? We go on rides and feed our faces. Then it’s out onto the water. First view 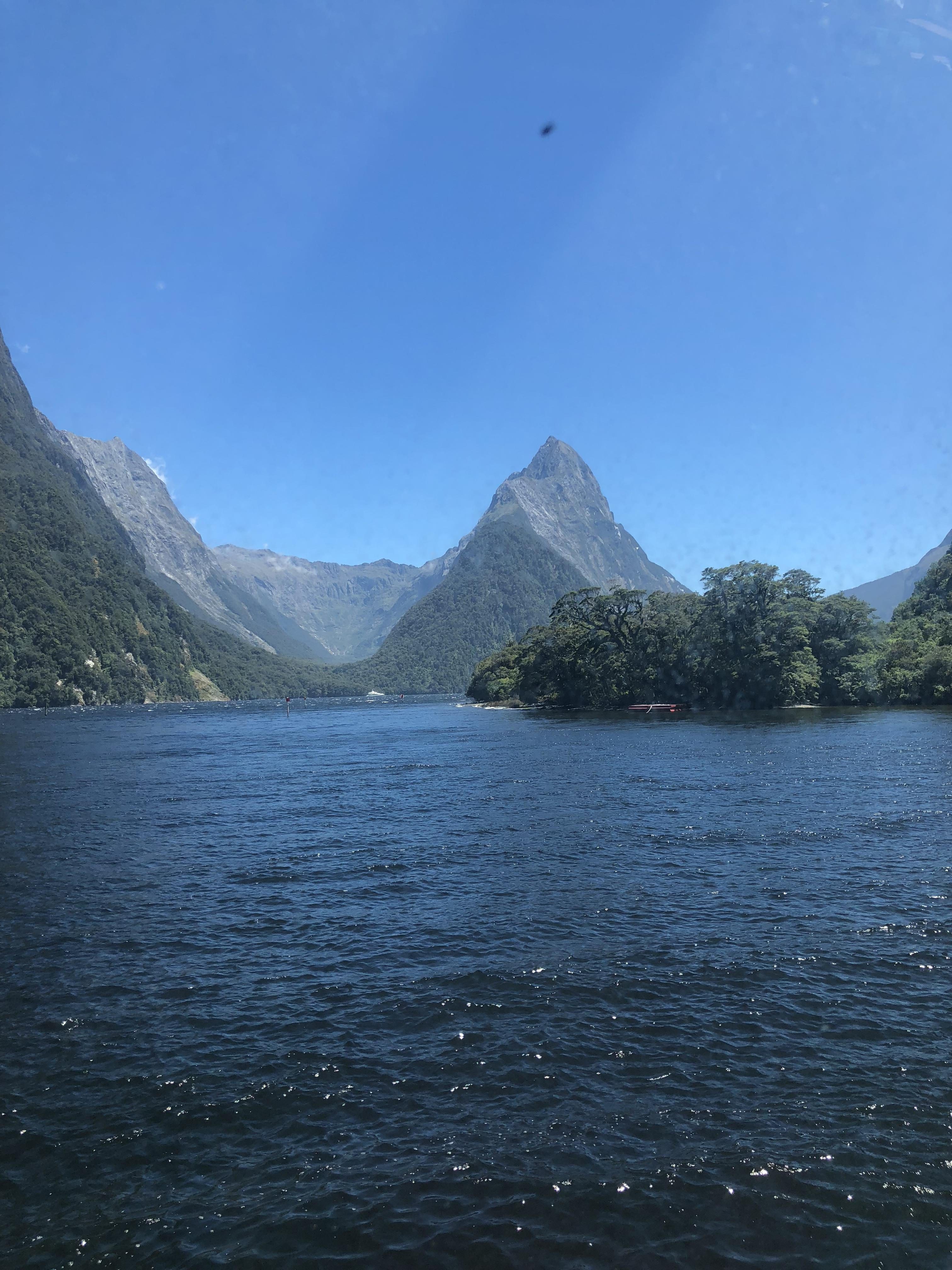 So now we go into the fjord, and we’re not the only ones 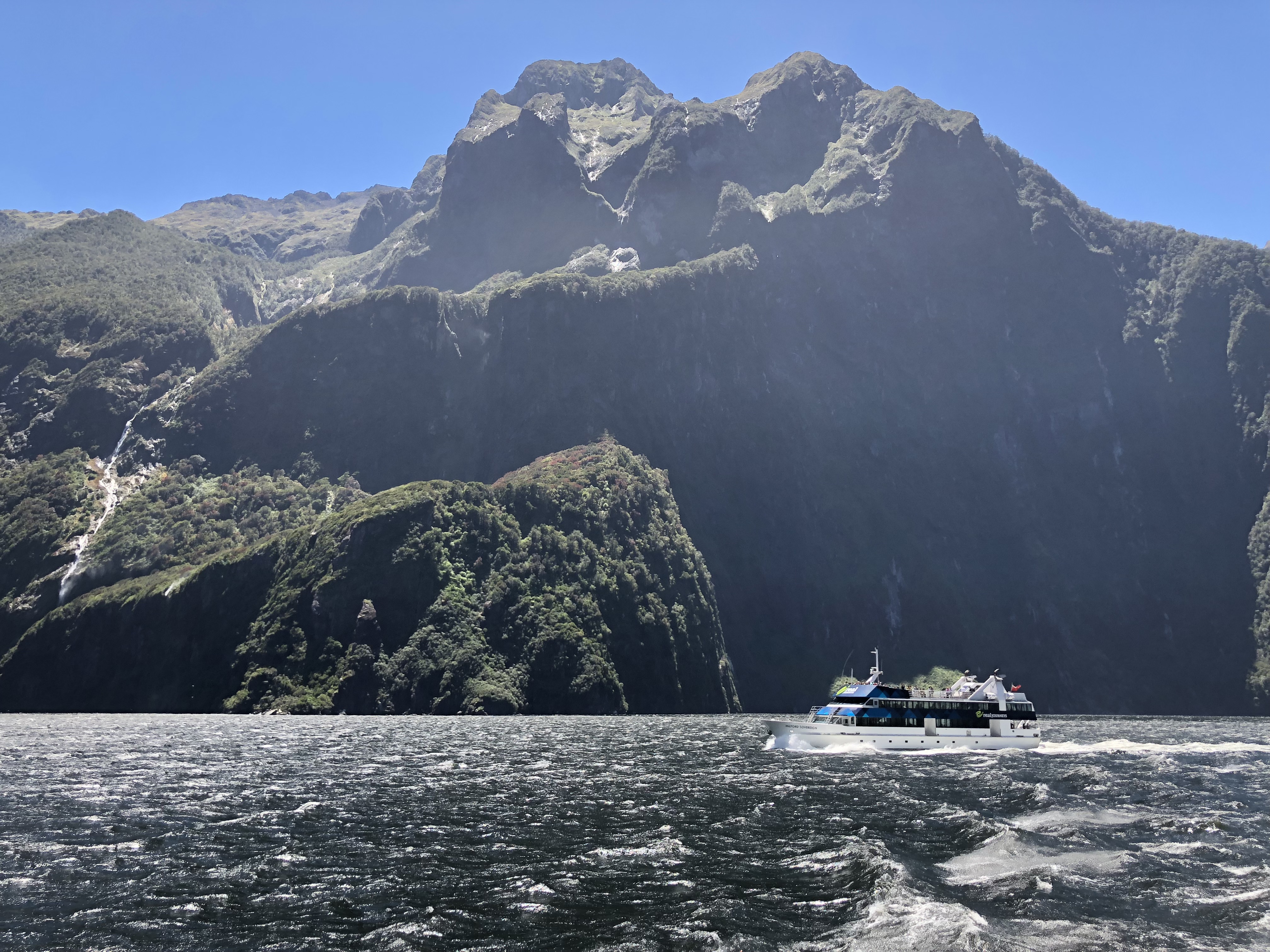 Here’s a view from the boat of the same waterfall we saw from the plane. 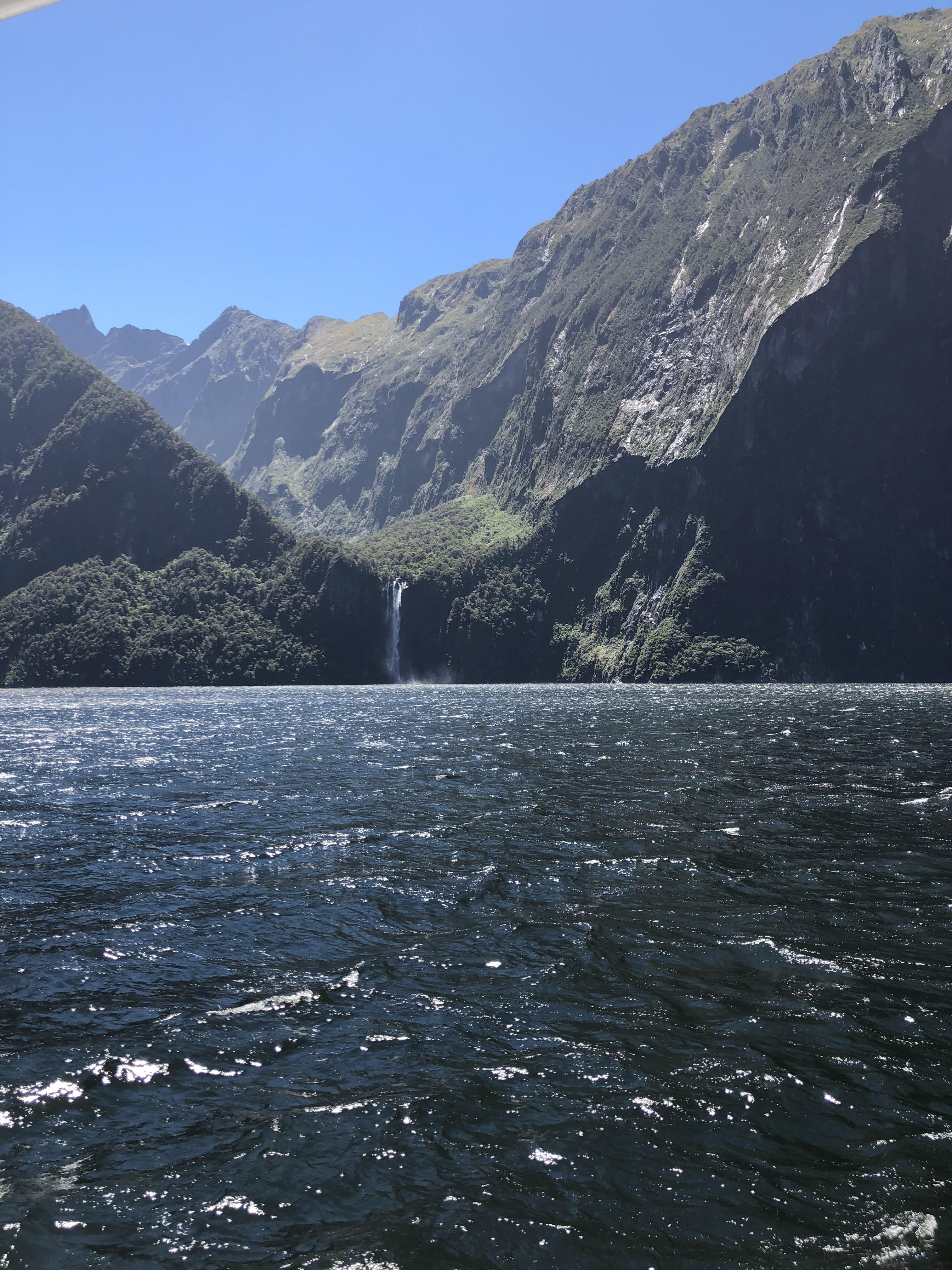 Distances across bodies of water are deceiving. The waterfall doesn’t look very far away, but our guide tells us it’s as tall as a 50-story building. 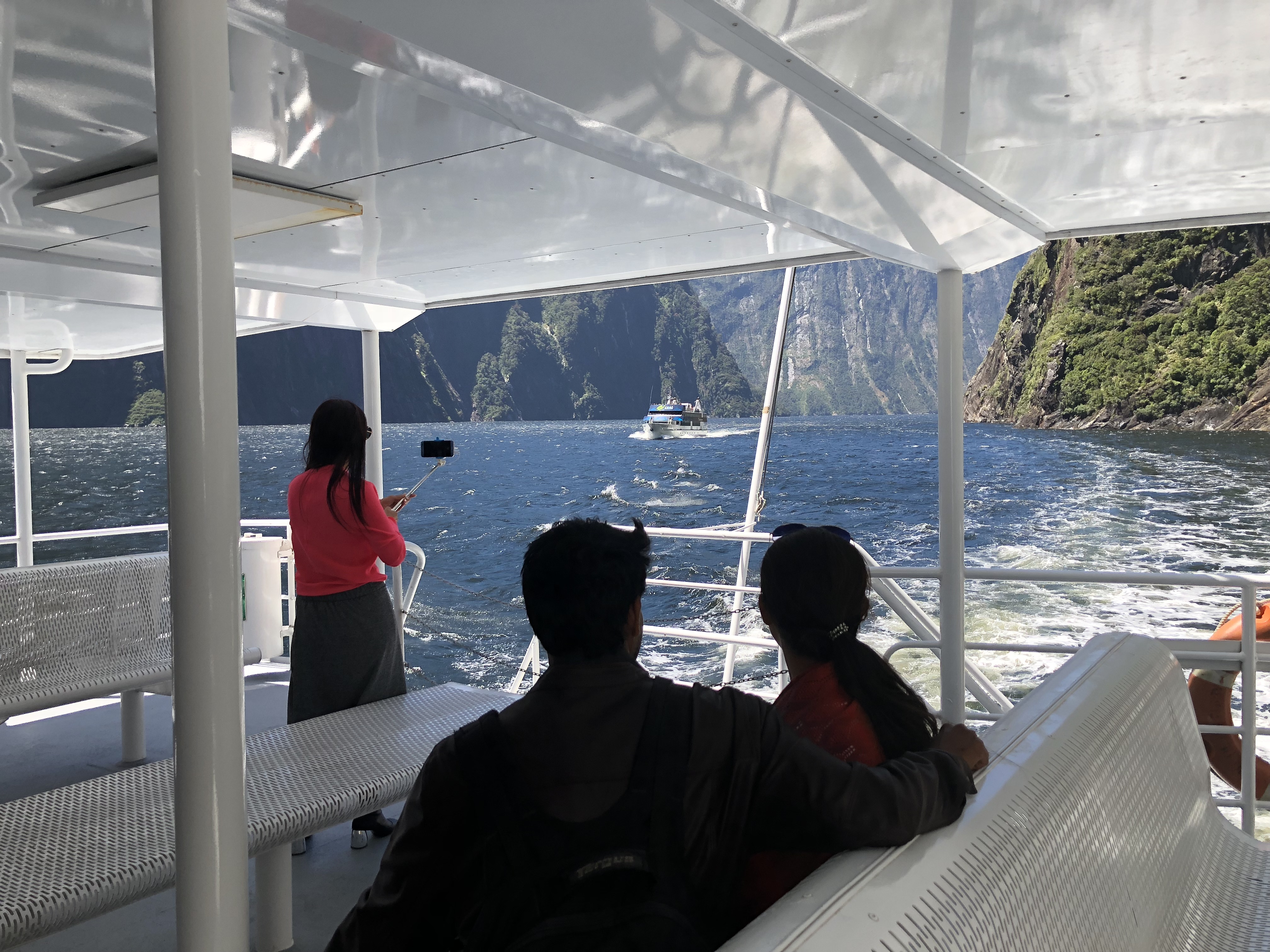 More on the boat 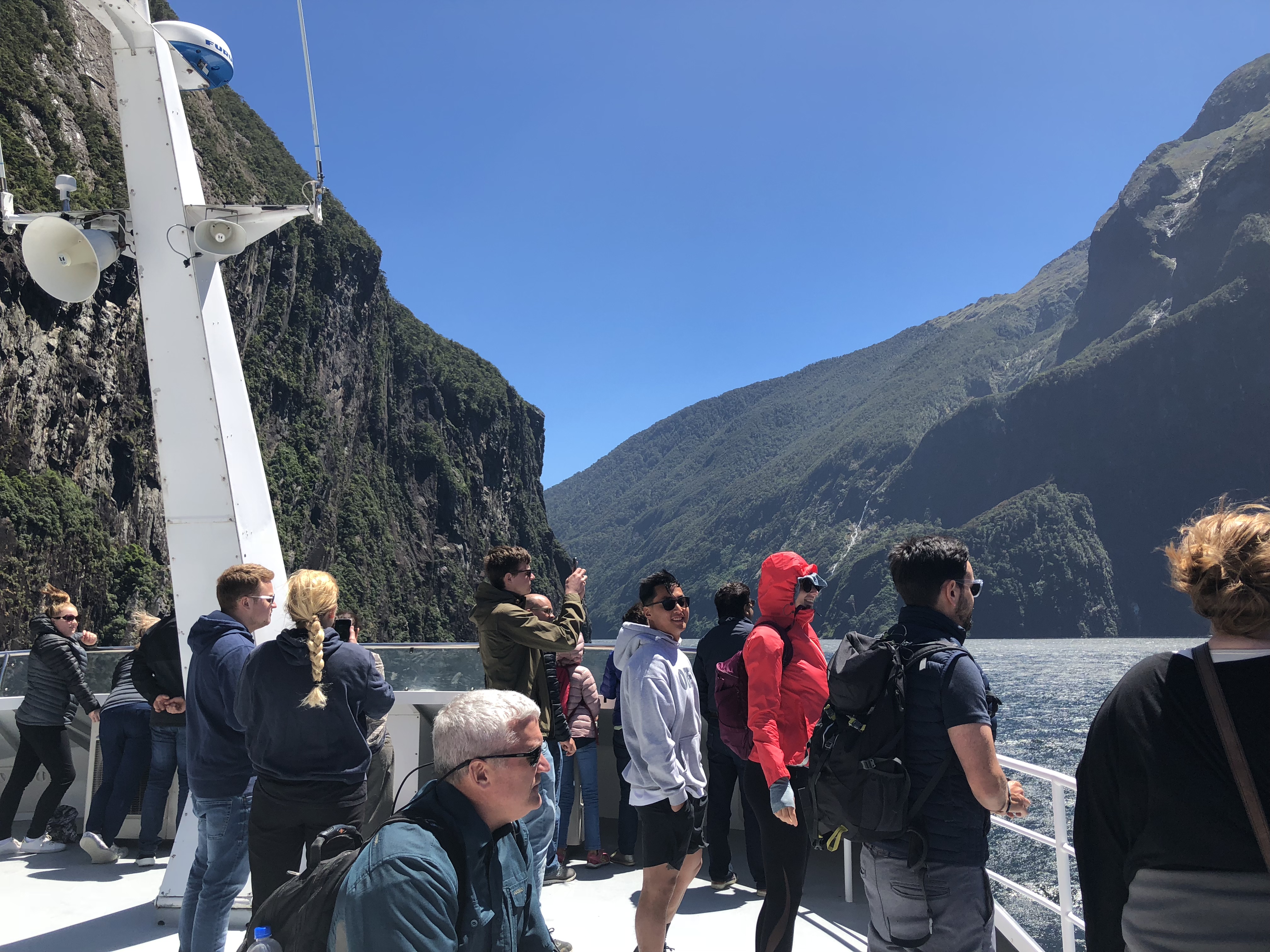 It had never been my particular ambition to see the Tasman Sea, which is situated between New Zealand and Australia, but it turns out the mouth of the fjord opens out onto it. And here it is 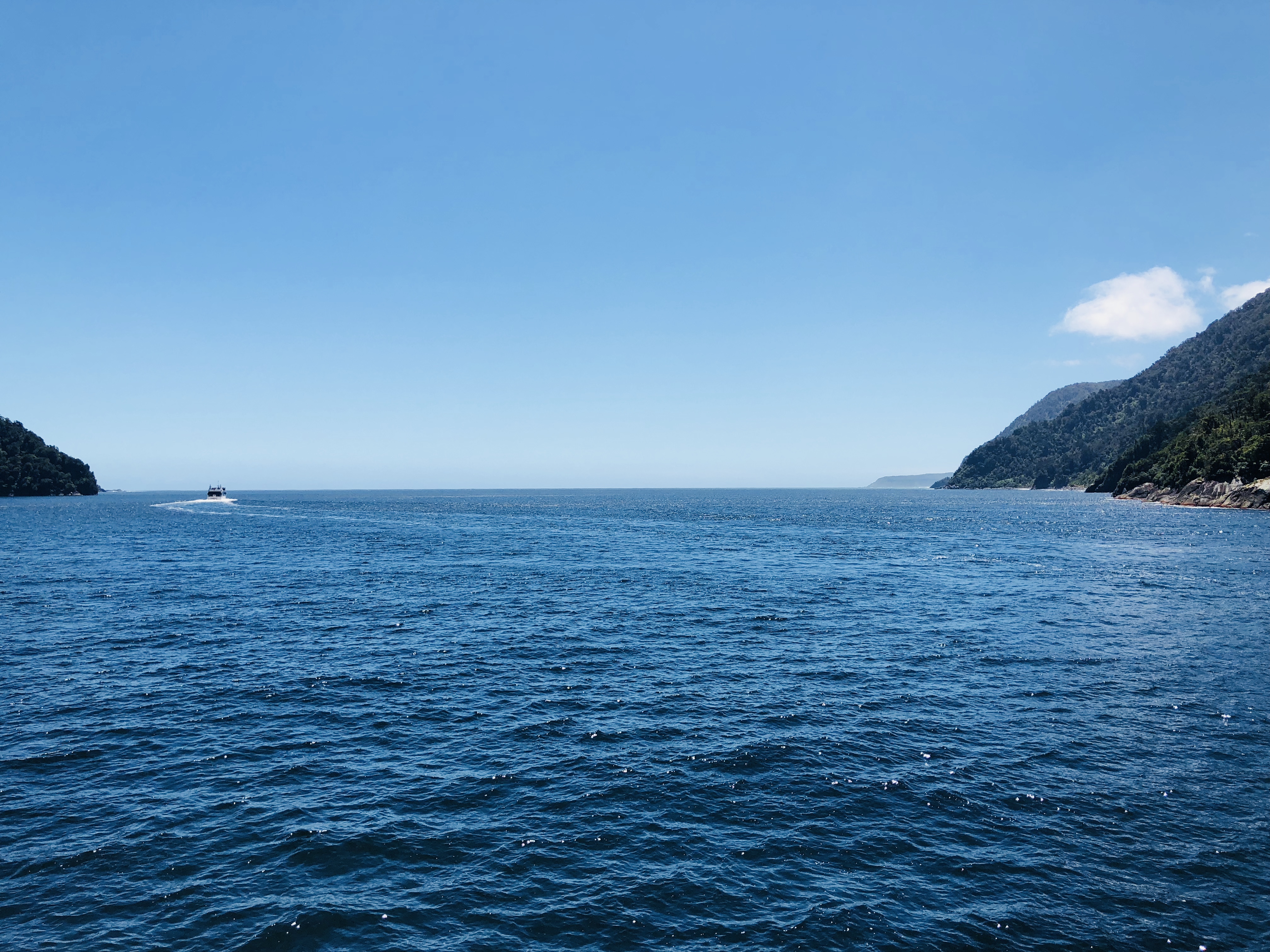 The Tasman Sea was named after Dutch explorer Abel Janzoon Tasman, known for his voyages of 1642 and 1644 in service of the Dutch East India Company.

Once there we turn around … 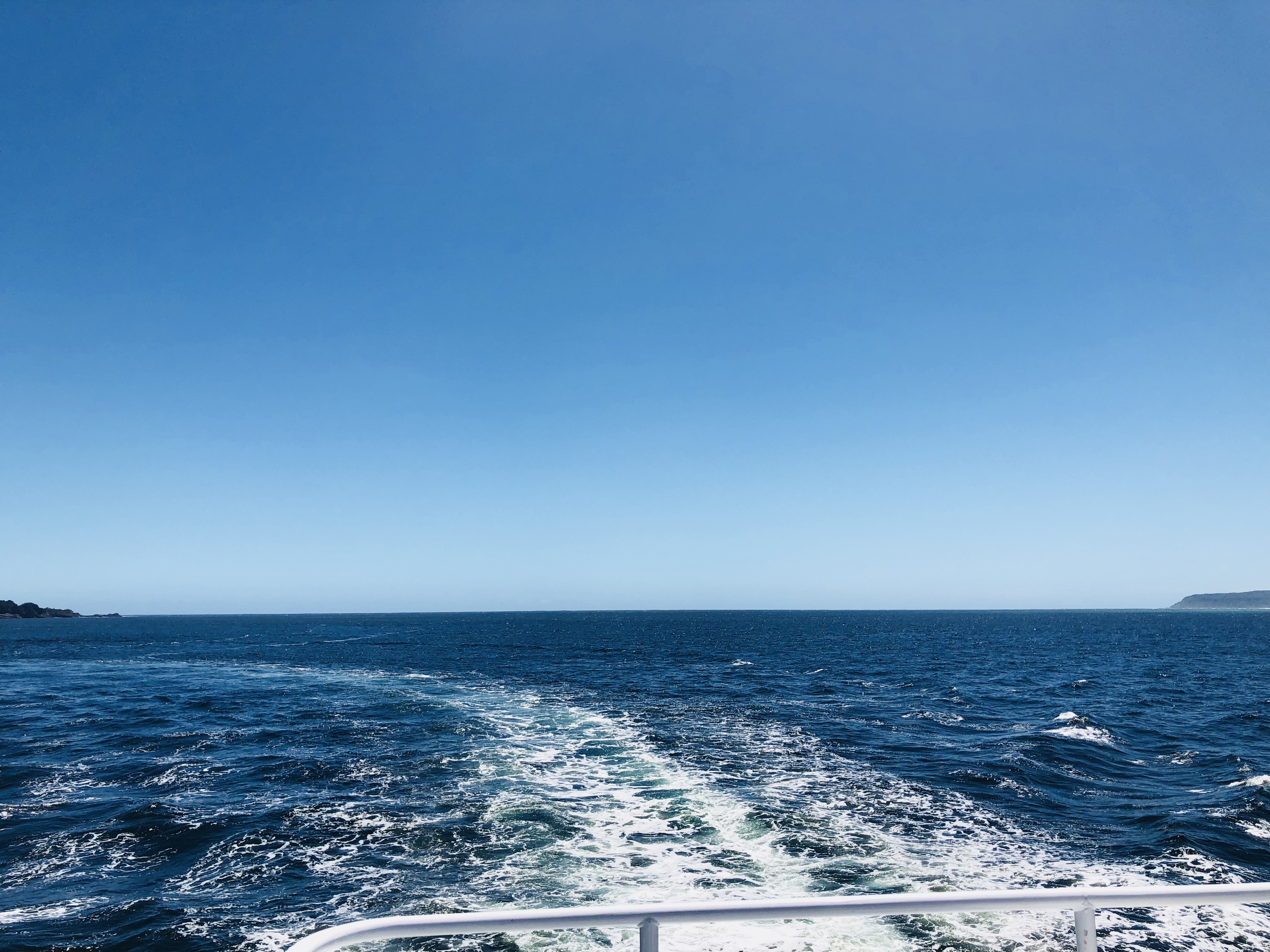 … and head back to the Milford landing.  Along the way we pass Seal Rock, so called because the brown dots on the rock are young male seals 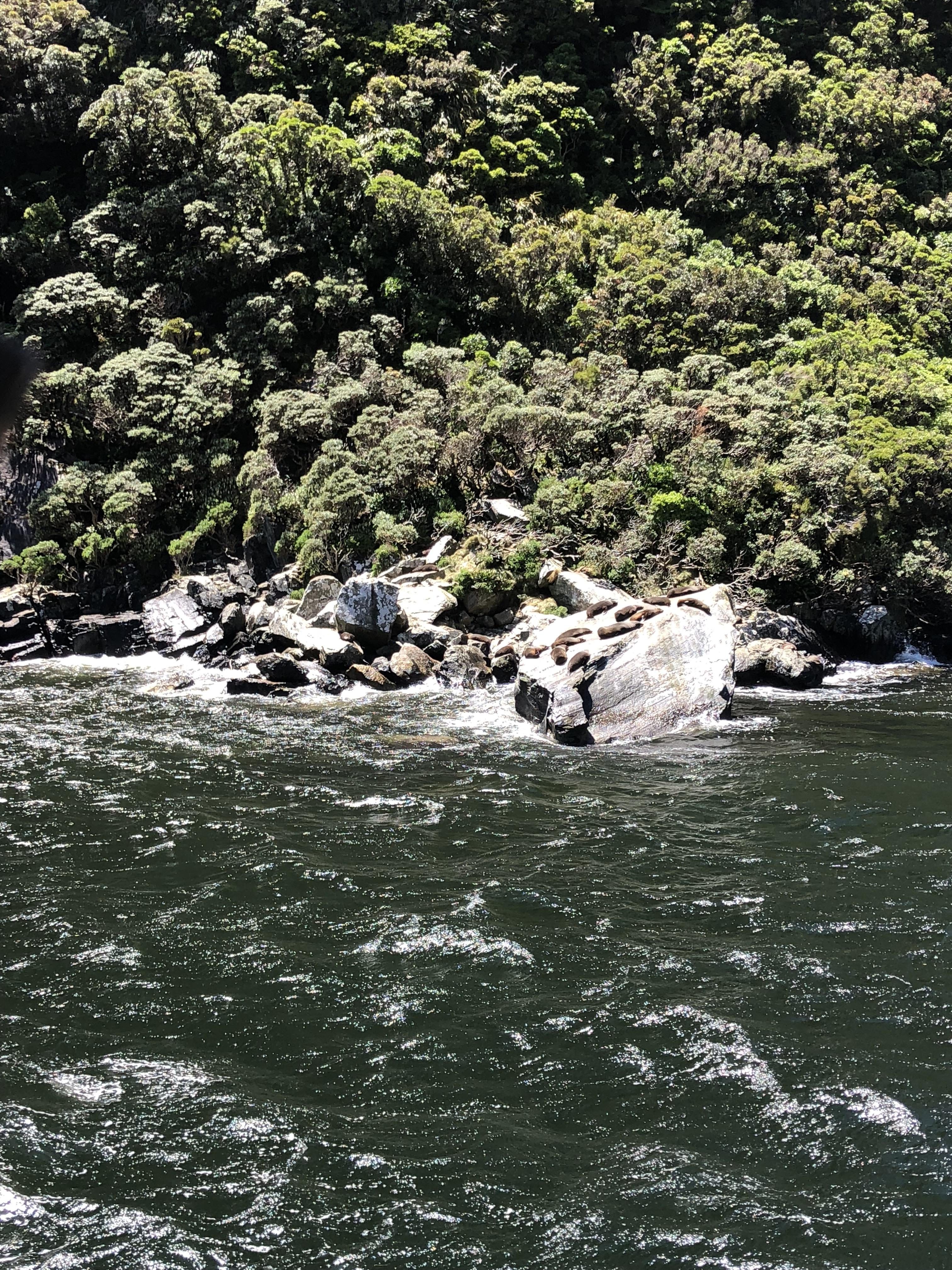 We approach the 50-story waterfall 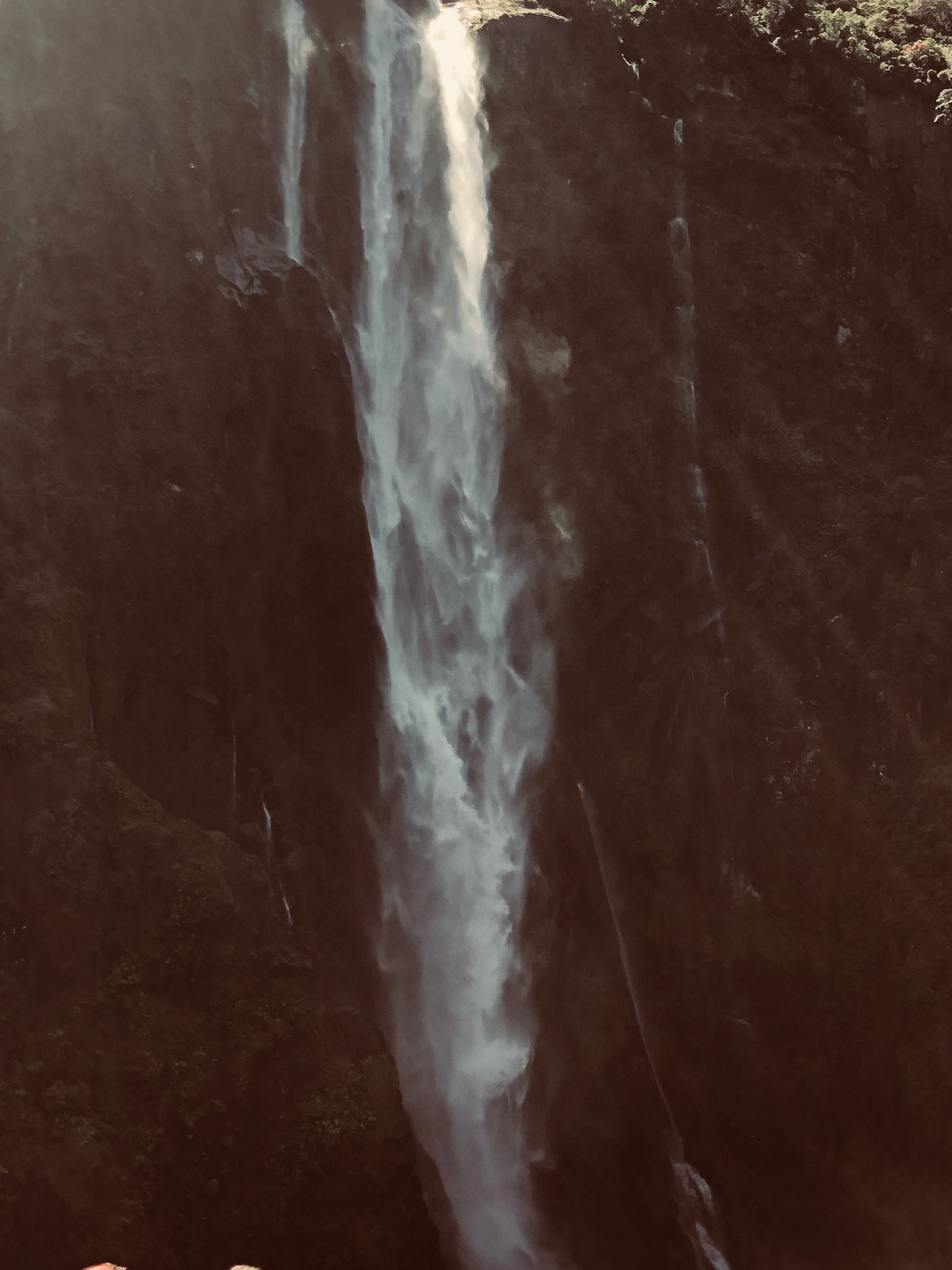 The apparent treat is to have a Glacial Facial when the boat goes under the waterfall. I chose to stay inside. All the people you see in the image, below, are about to get soaked. 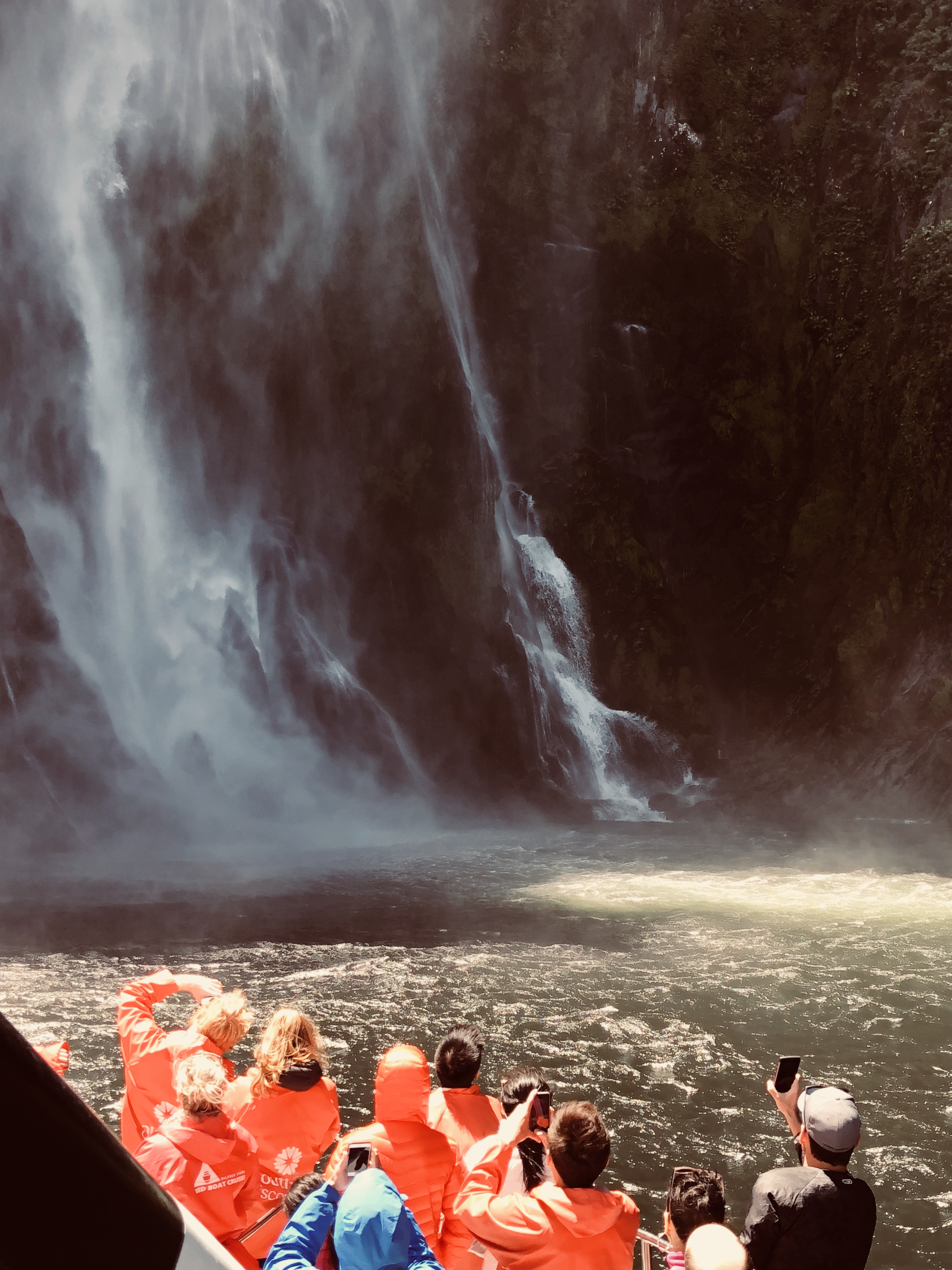 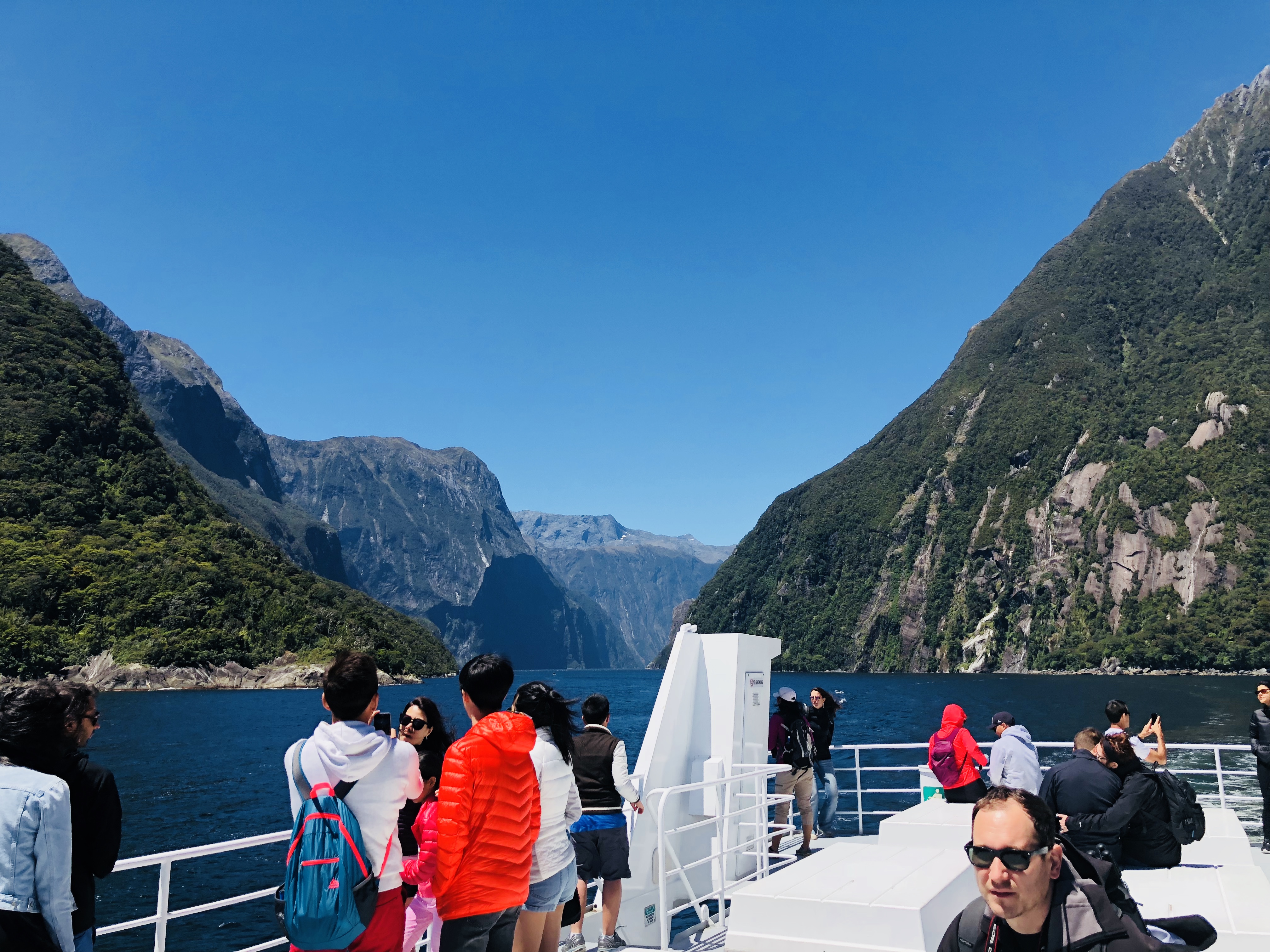 We return and have to get back in the dratted plane 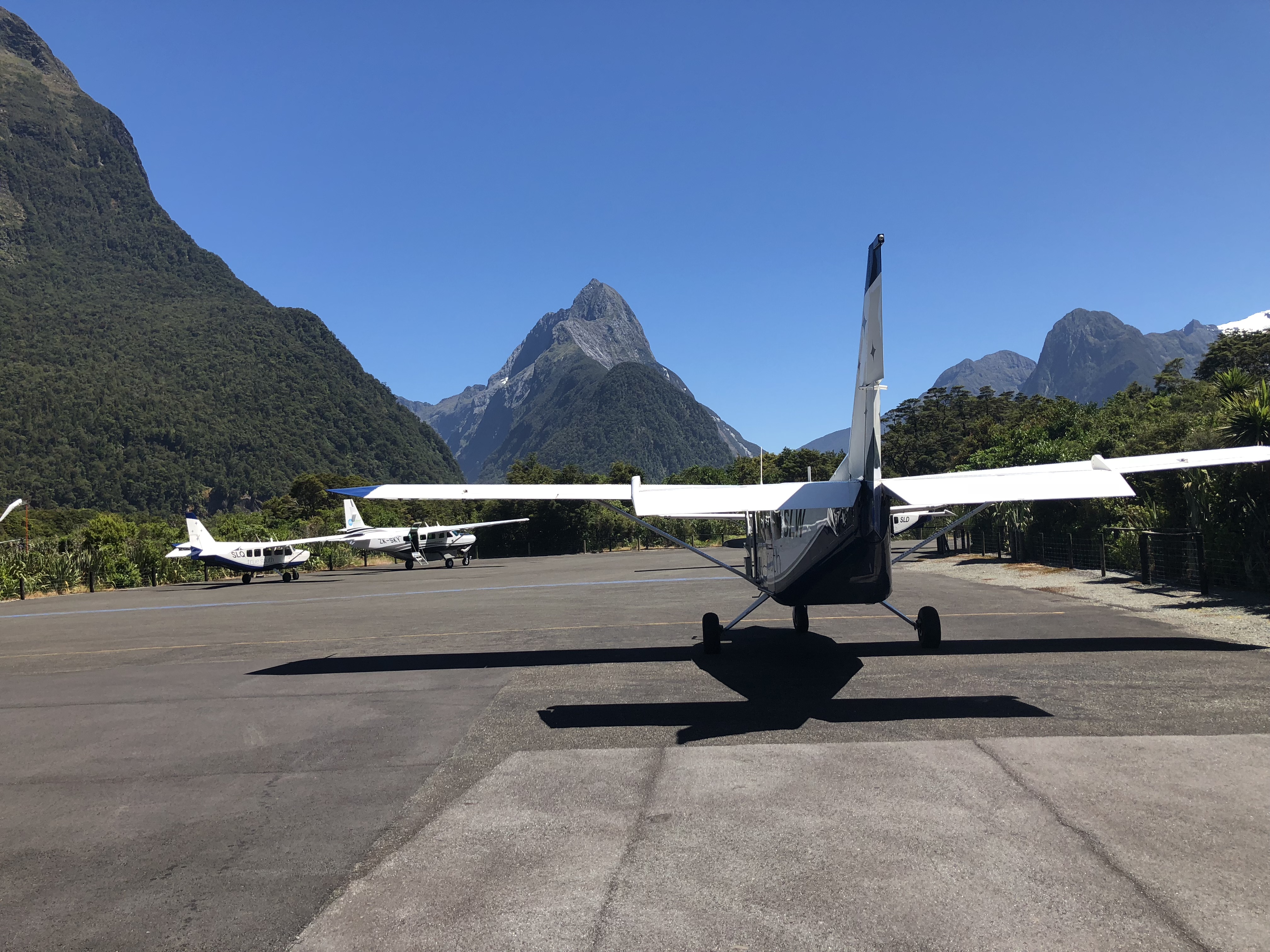 The pilot announces we’re going to encounter “a few bumps.” Apparently the ones we encountered on the way over weren’t worth mentioning.

On takeoff we’re bouncing all over the place. HOLY HOLY HOLY MOLY. I’m definitely not a happy camper.

Can’t concentrate on the views while we’re swinging and swaying high in the mountains. But here is a view I could bear to take 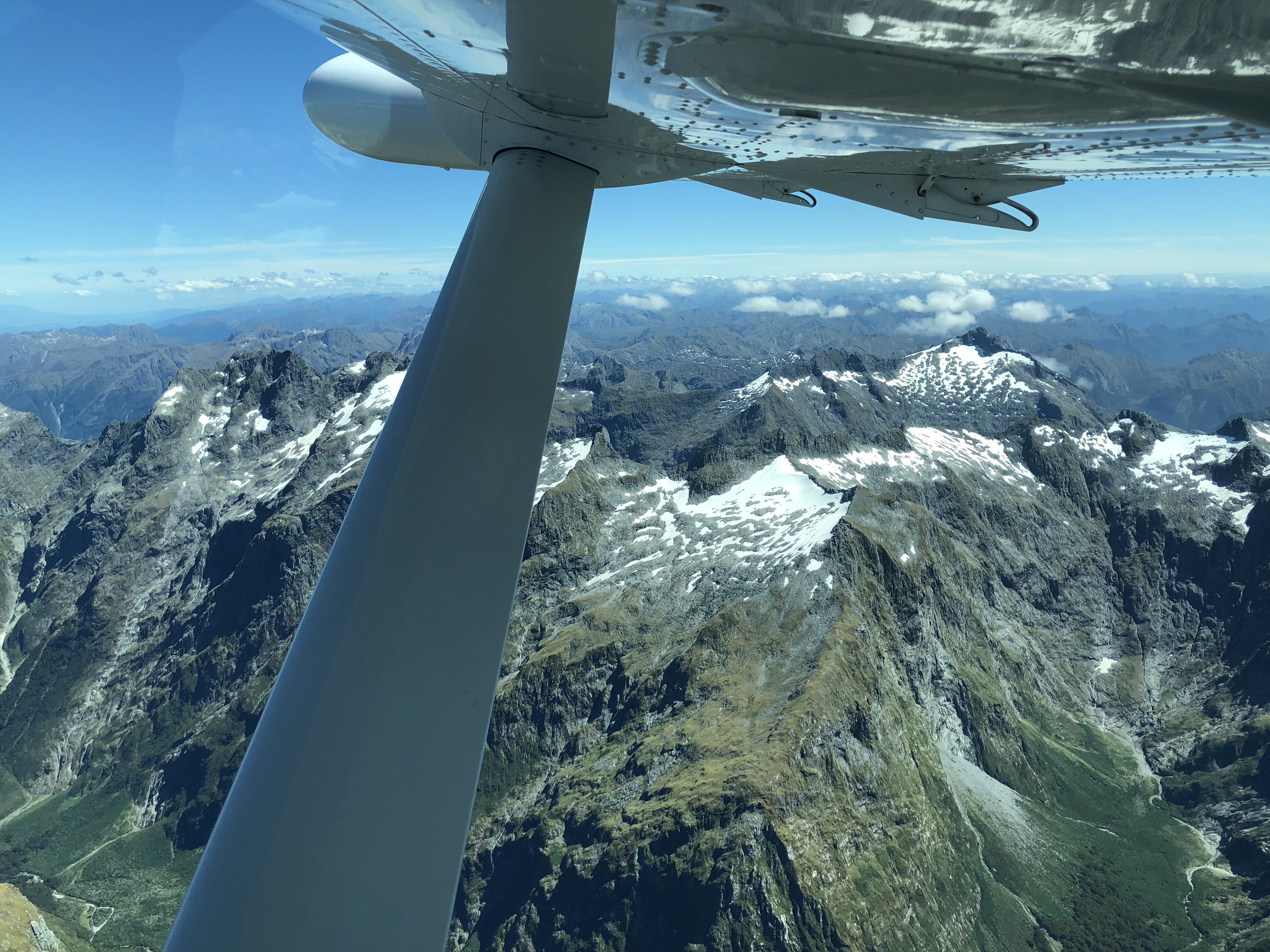 Mostly I spend my time clutching David’s hand (and arm and shoulder). The experience is far worse than on the way over. 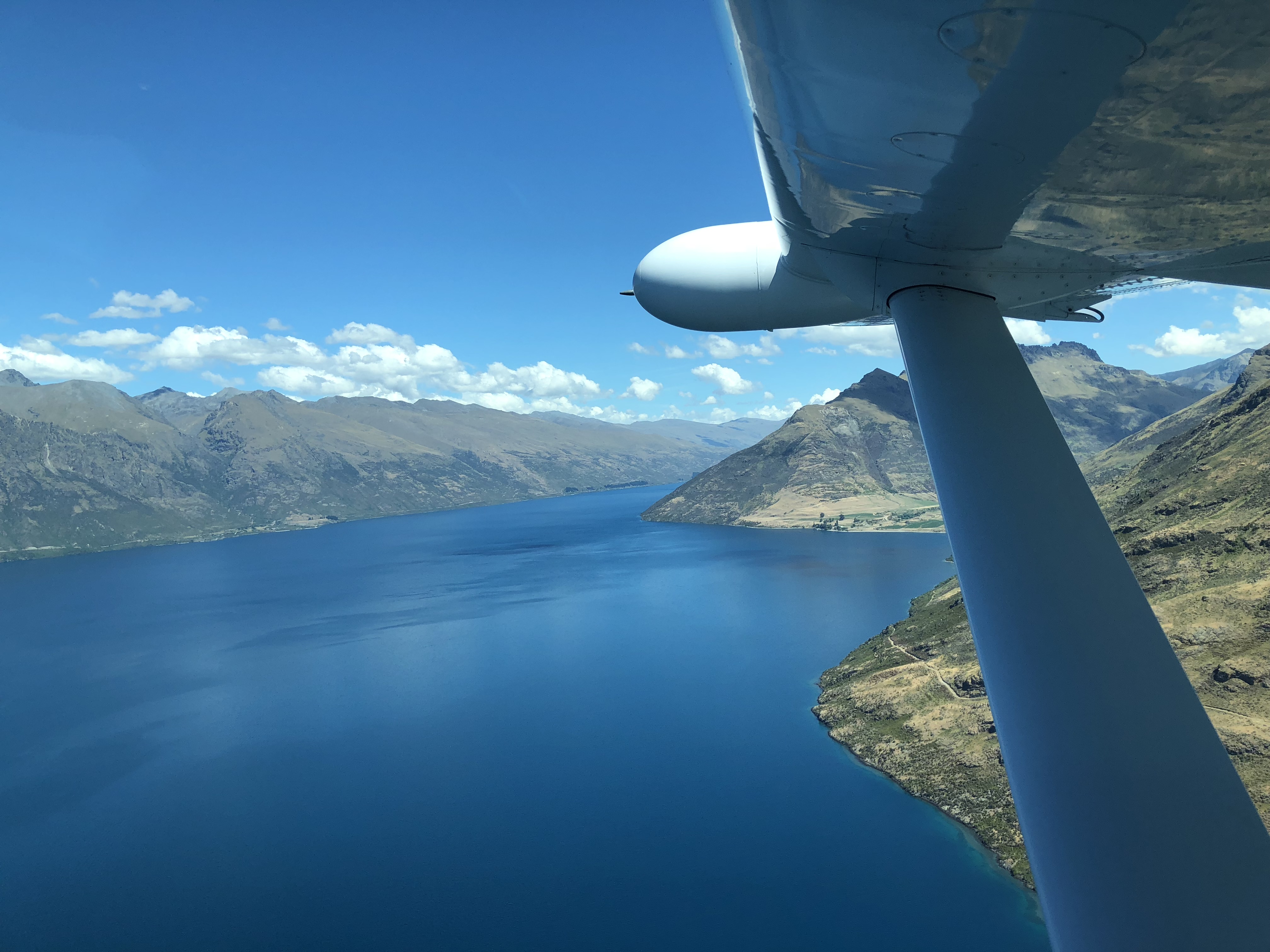 Only a few minutes of agony left.

We land. I get out of the torture chamber.

I look online and see everyone raving about this trip. So, it’s me. I know I’ll never do anything like this again. Great scenery but too much adventure for me. 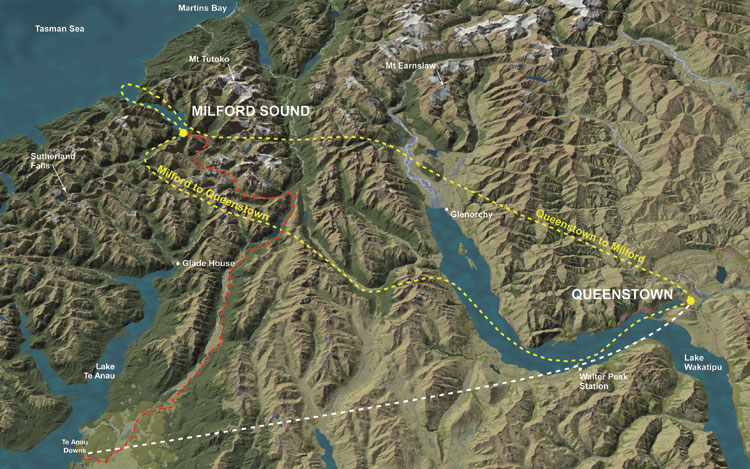