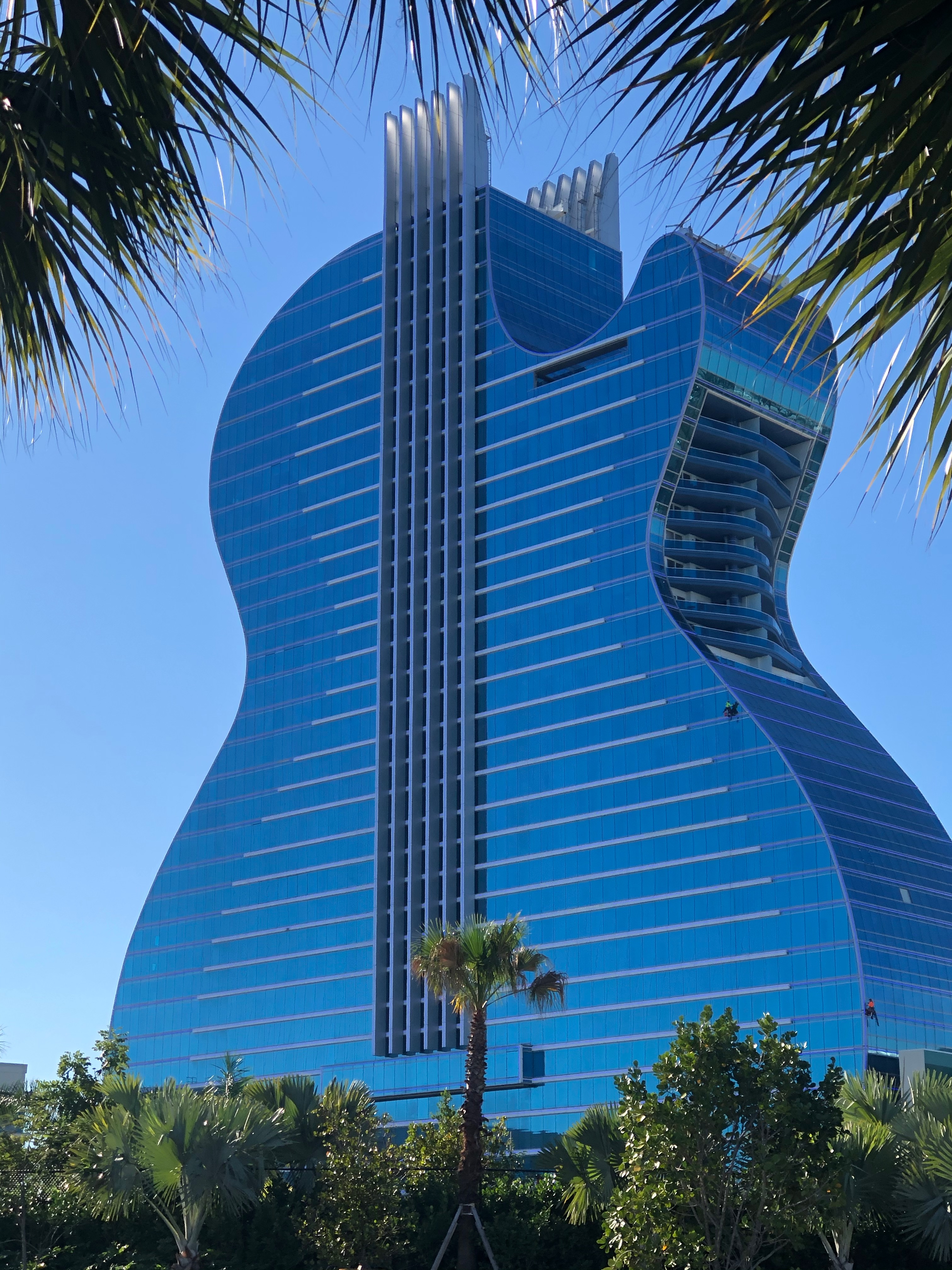 Native American Casinos. They have been my research focus this week. That is, when I’m not attending to my duties at Florida International University.

The title image is my street-level view of the structure. The angle does not do justice to its impact. Especially at night when a light show rocks the façade.

The hotel was ten years in the making. And it’s the only guitar hotel in the world.

The theme is consistent. Right down to the door handles. 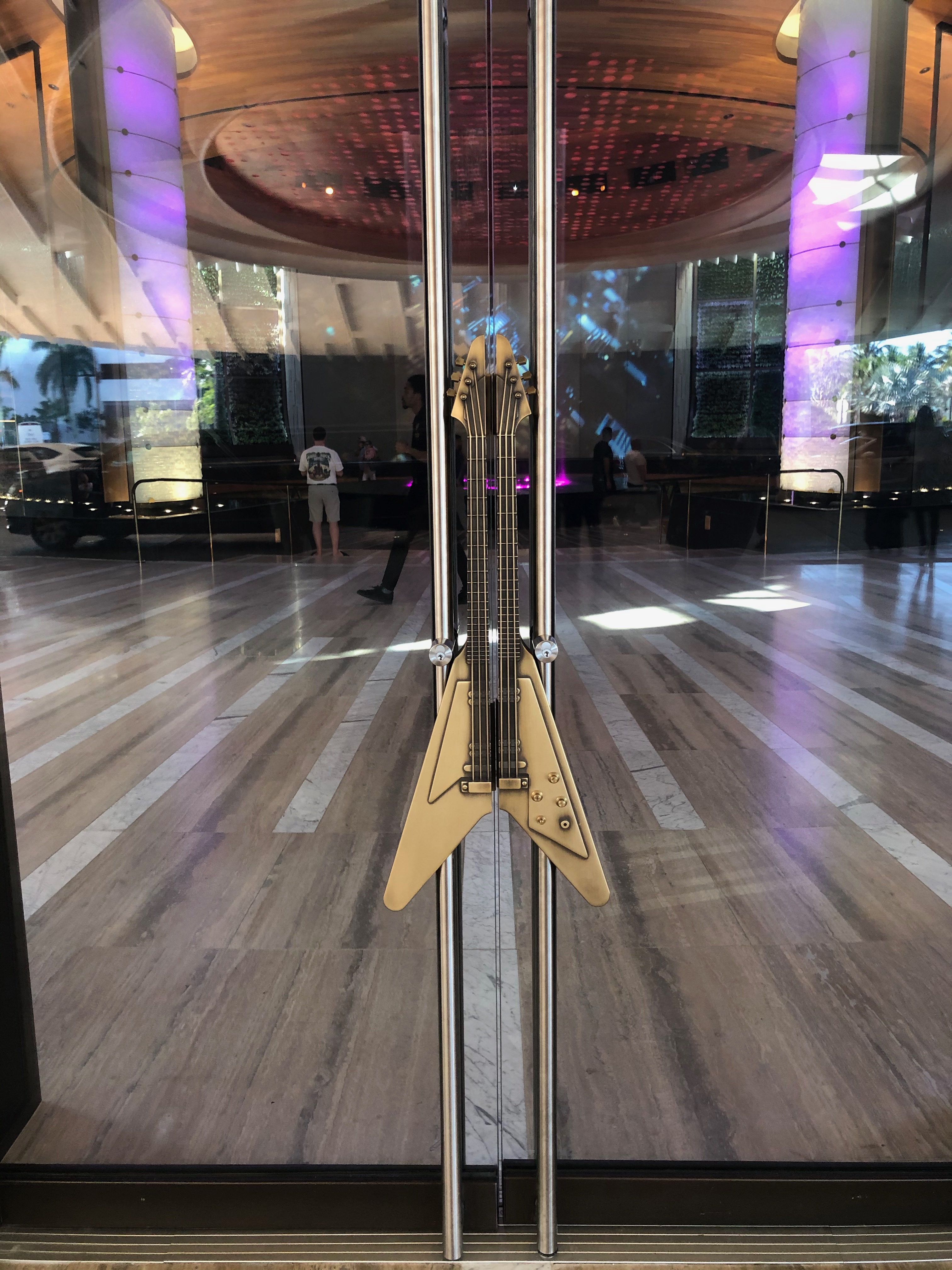 I’d never before been to a Hard Rock Café. So perhaps the door handles are a signature of their properties in general. Speaking of which, I don’t know the financial arrangements between Hard Rock Corporate and the Seminole Tribe. Clearly, a licensing agreement is in effect.

The lobby is spectacular. A circular fountain cascades from the ceiling: 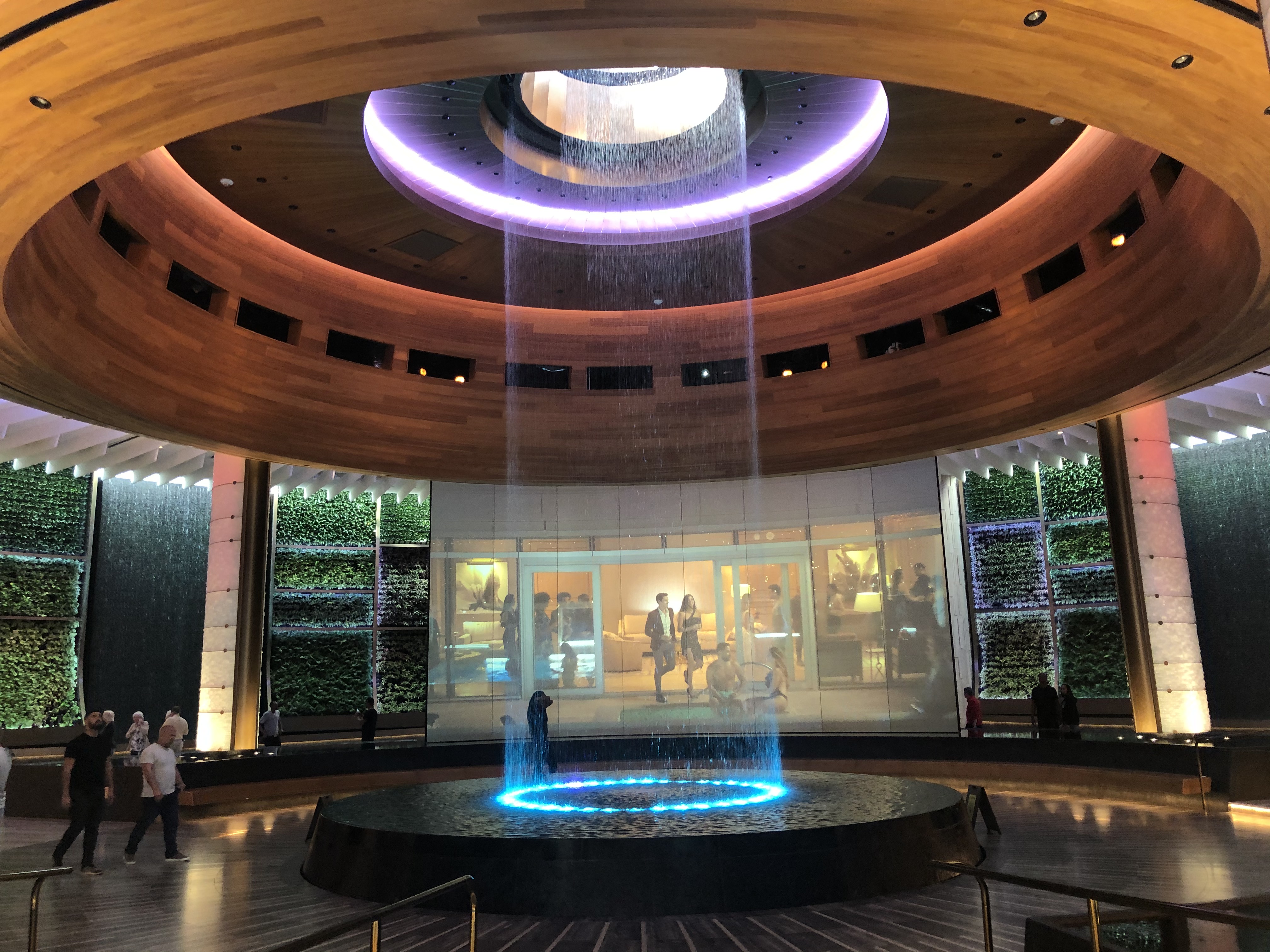 The whole place is spectacular. Turn right from the lobby and you are in the Reception/Check-In area: 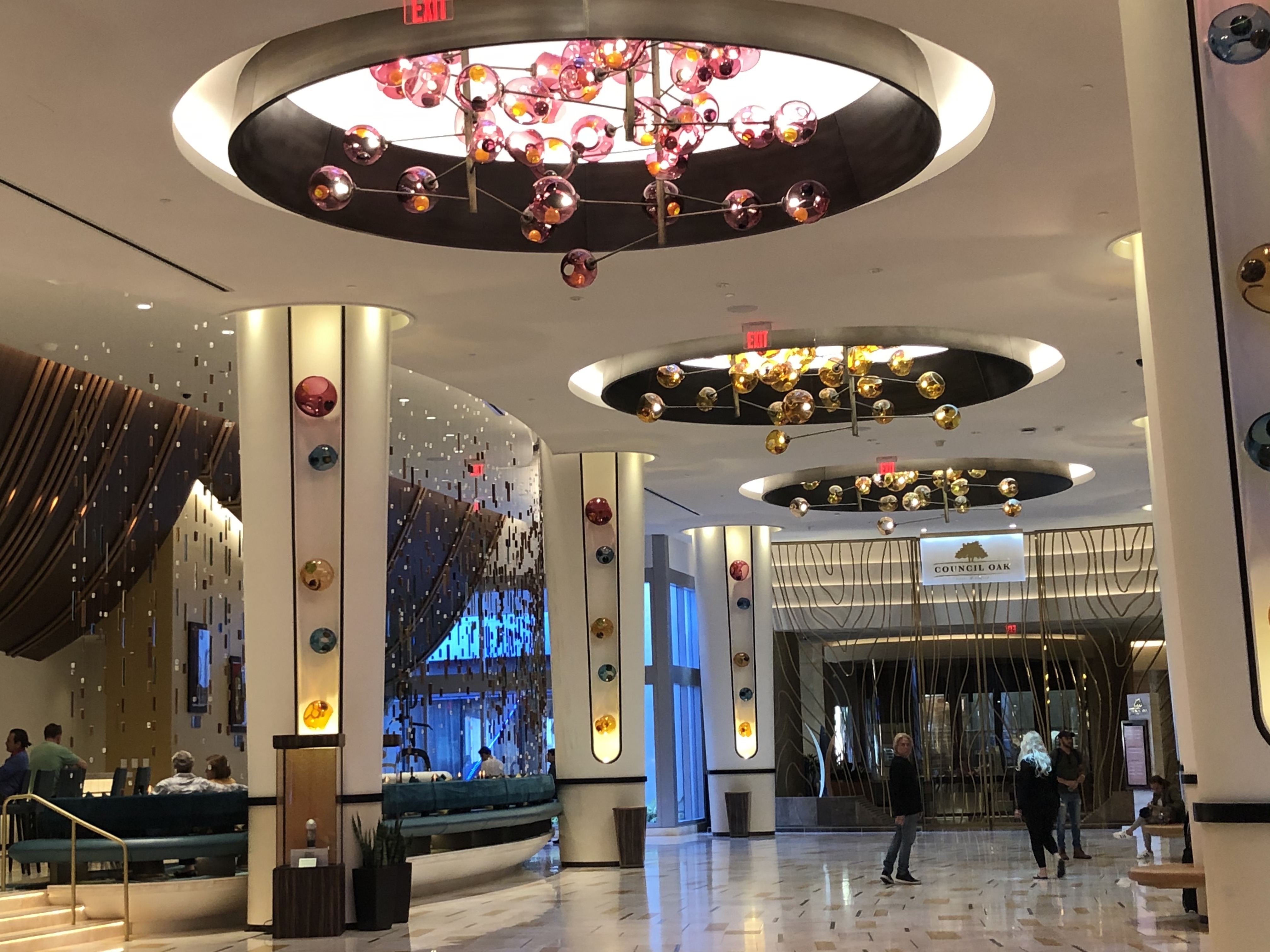 Turn left from the lobby and you’re headed toward the casino: 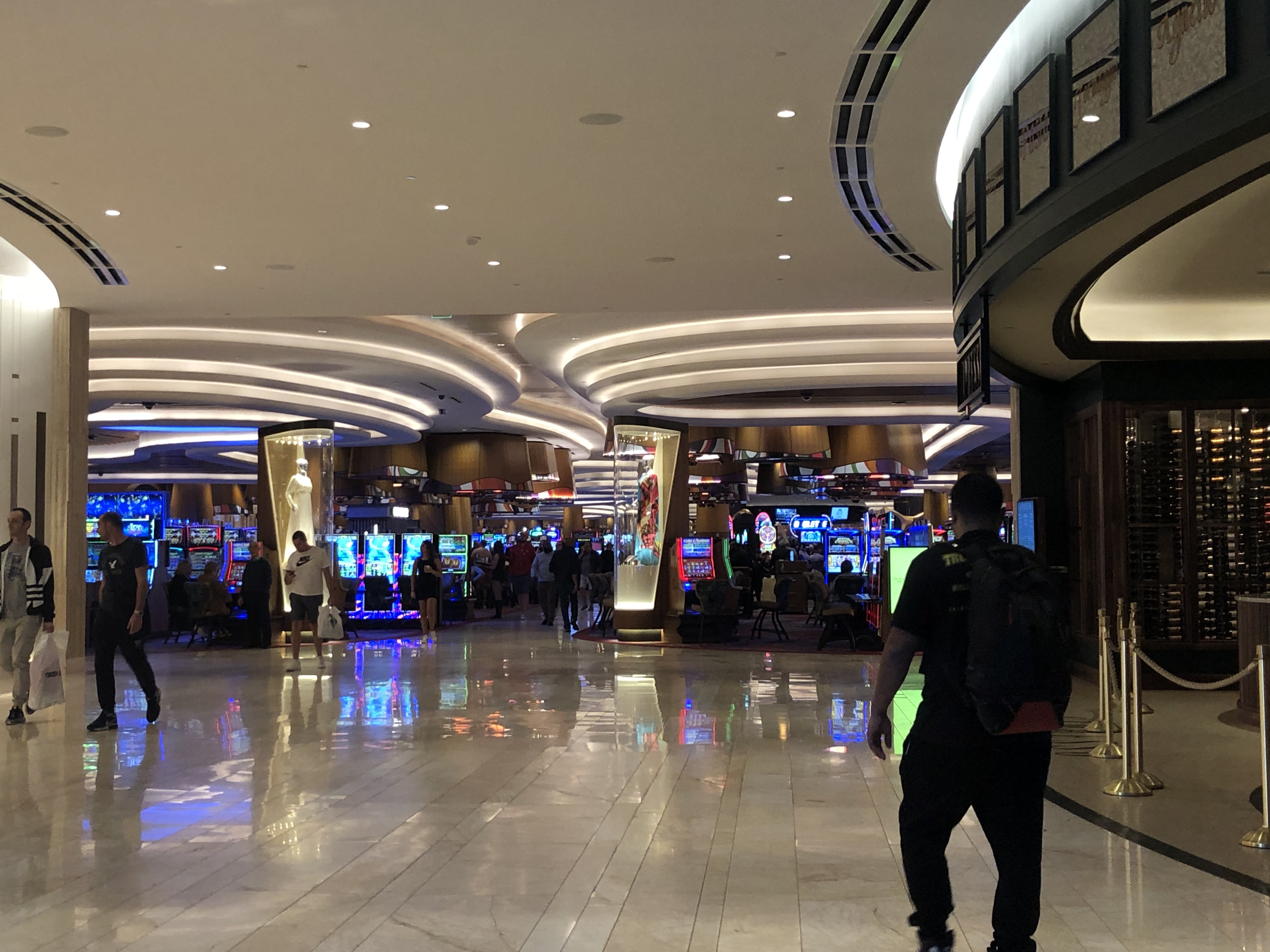 I would be curious to know the precise acreage of the casino. The machines must number in the thousands. 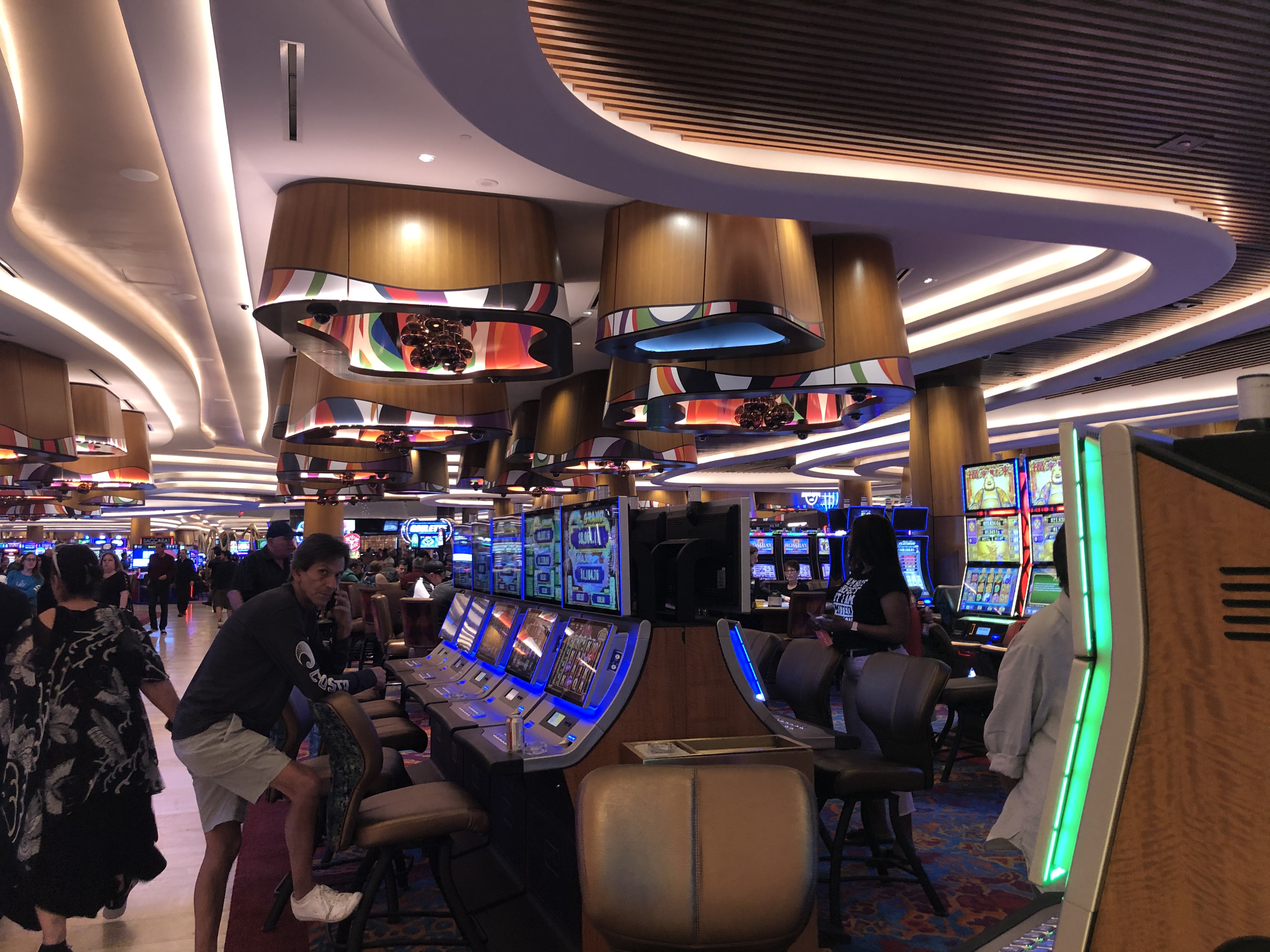 The complex includes a large corridor that is a luxury mall. Need a Davidoff cigar? 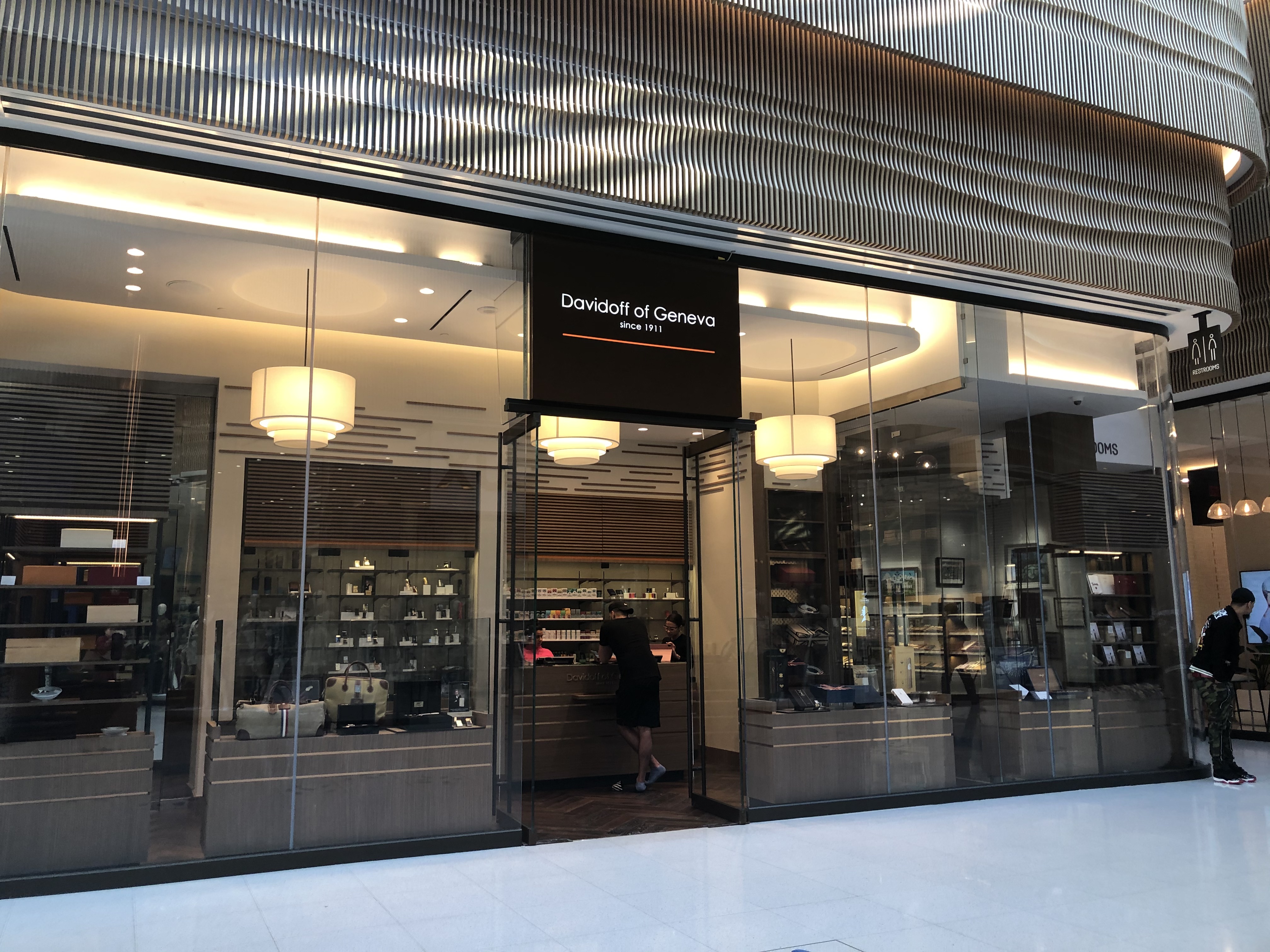 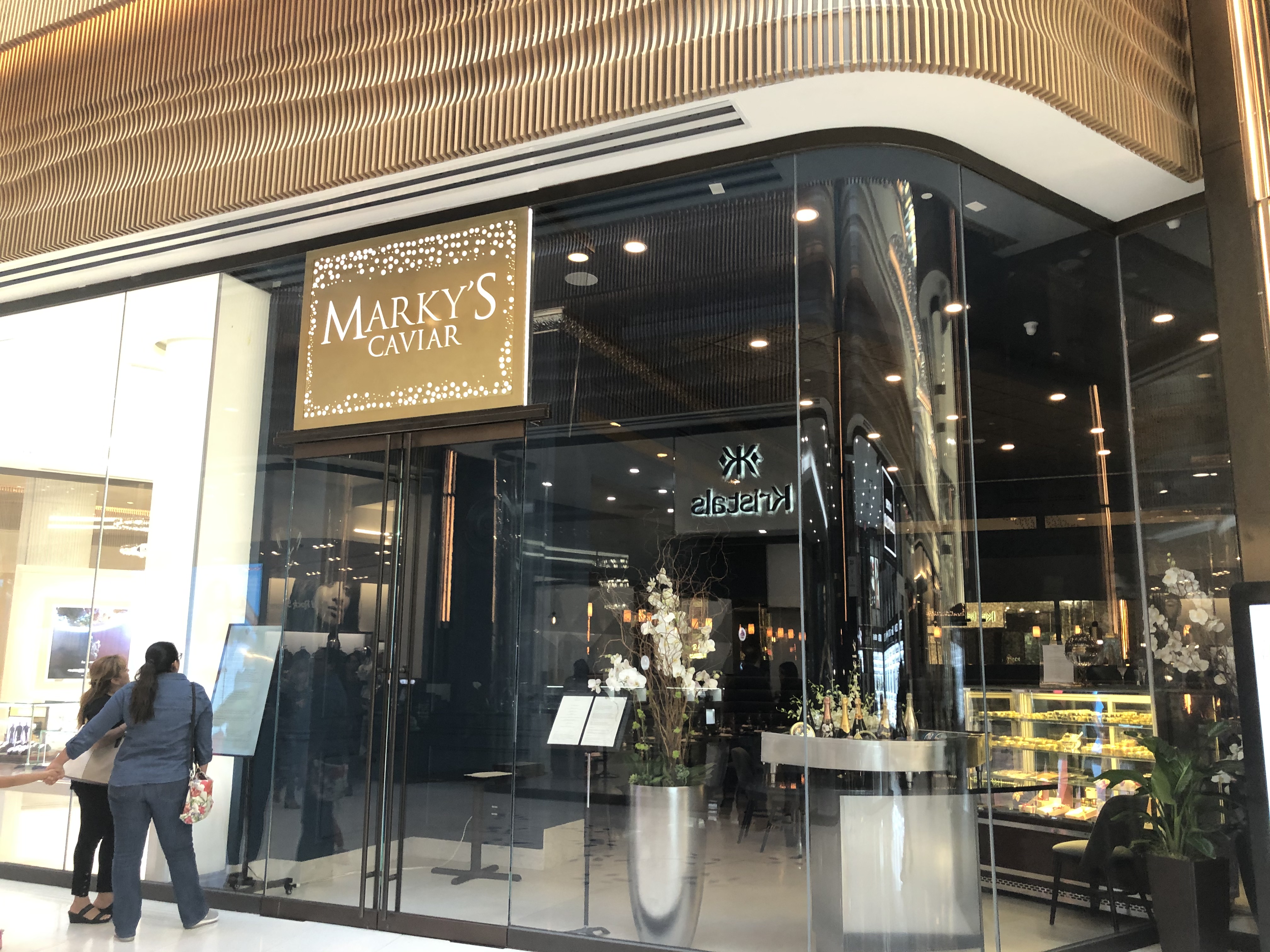 Well, then how about a Lamborghini? 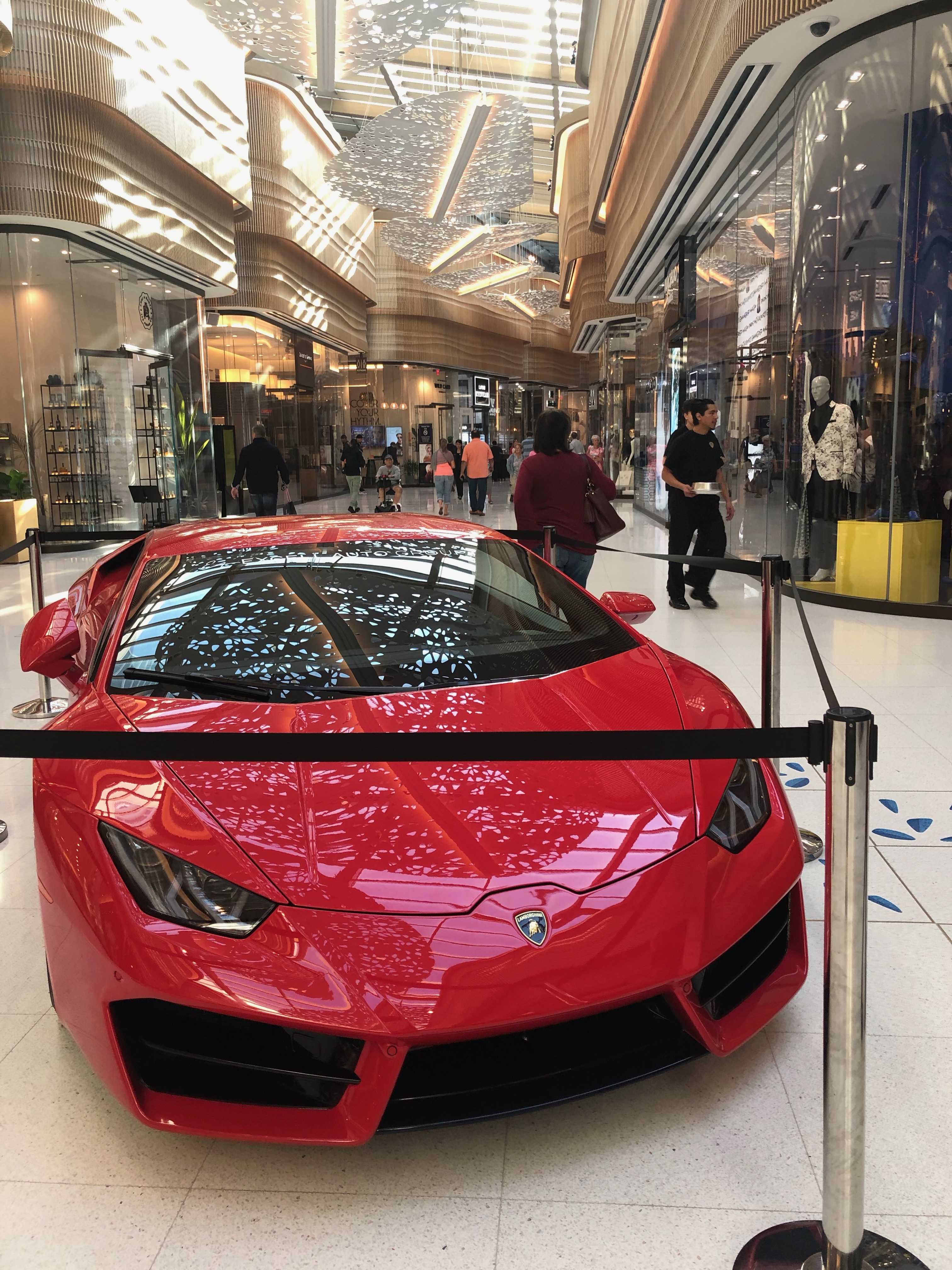 On the subject of cars, you can also ogle Neil Diamond’s 1956 Ford Thunderbird: 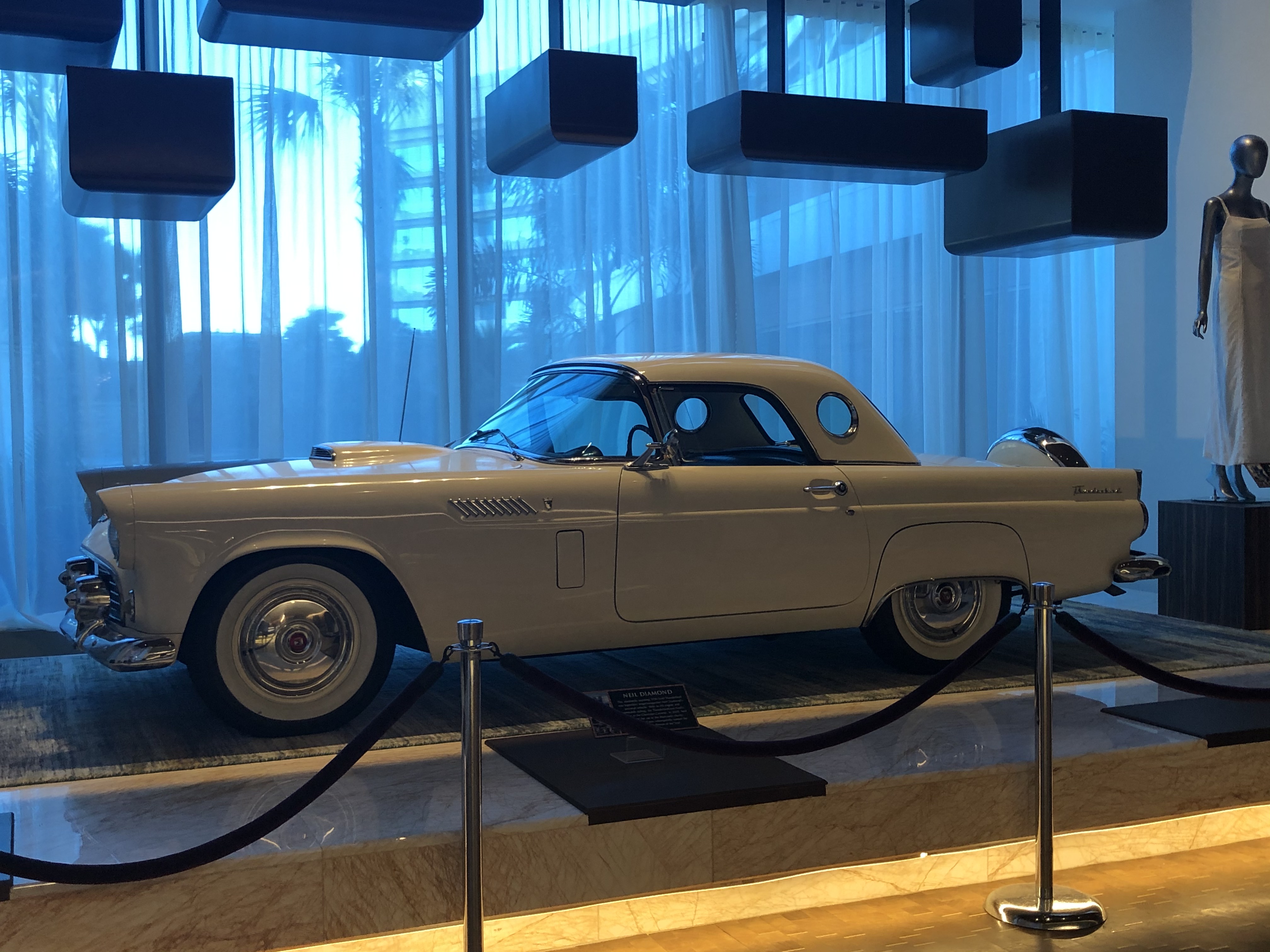 Because it’s a Hard Rock, rock star memorabilia abounds. I’ll include only one. Namely, the velvet trousers of Jimi Hendrix from his personal wardrobe. The sign says that he helped defined the hippie style that was heavily influenced by his Cherokee heritage. Another Native American connection! (But not in Florida.) 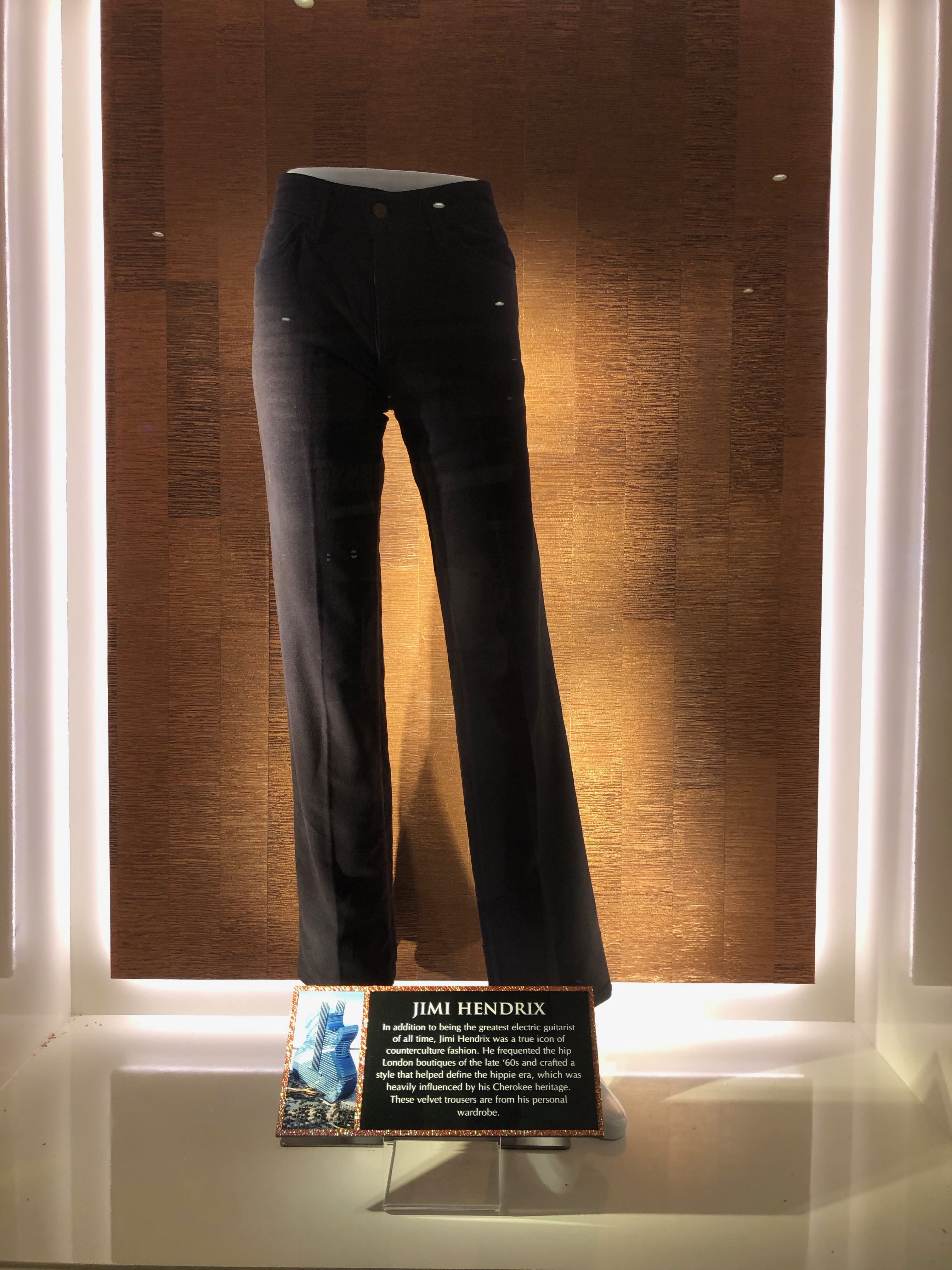 I paid my respects to Jimi when I was in Seattle last April.

I went to the Hard Rock yesterday. Last Saturday I went to the Miccosukee casino on the eastern edge of the Everglades. It is about 20 miles west of downtown Miami. 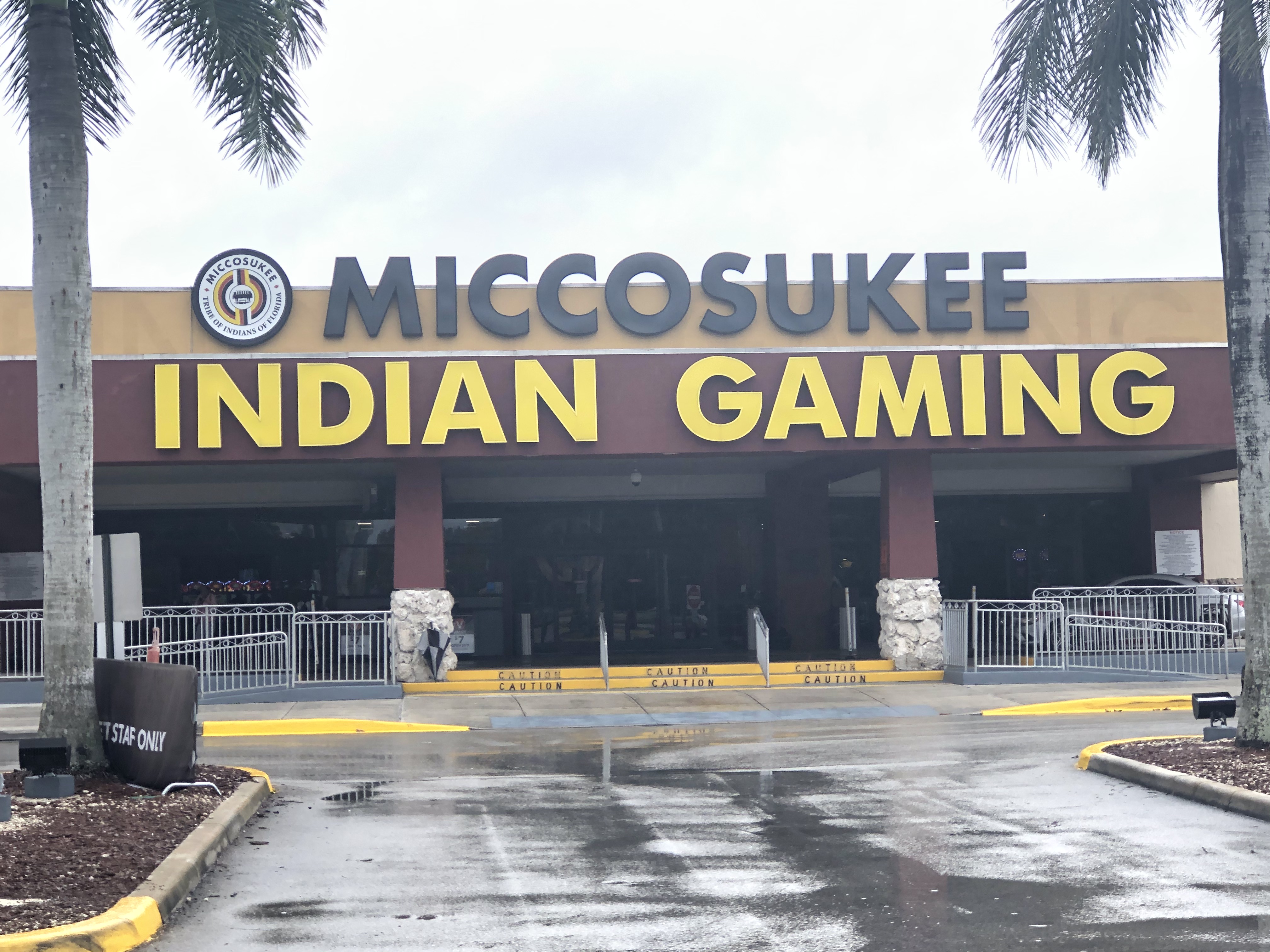 The Miccosukee are distinct from the Seminole. Their complex is smaller than the Hard Rock, but they also have a separate golf course and country club. I did not visit that resort. 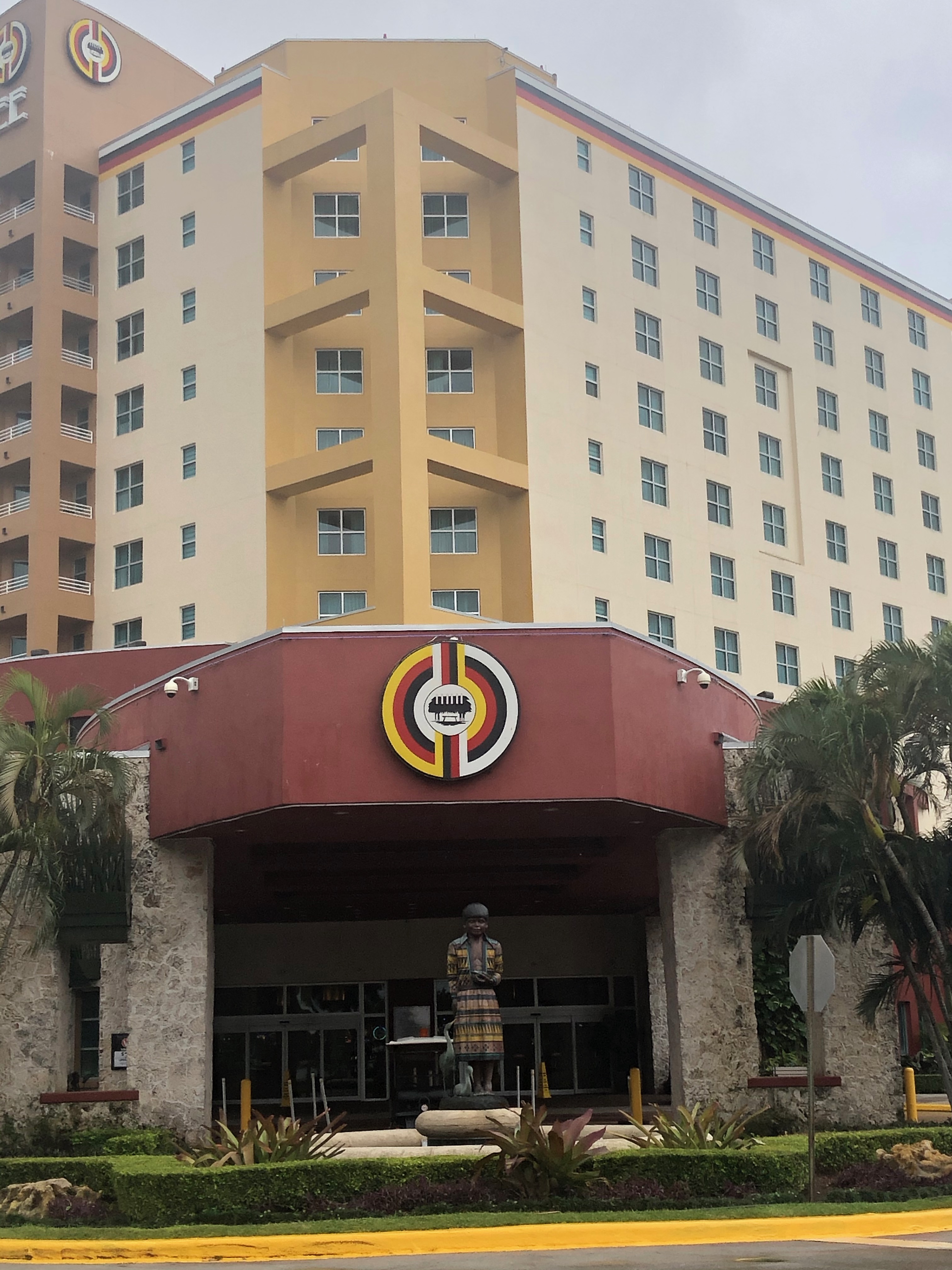 I asked at the front desk if I could take pictures. They allow them of anything except the machines. Here is a display of Miccosukee artifacts. You can see the machines in the reflection. 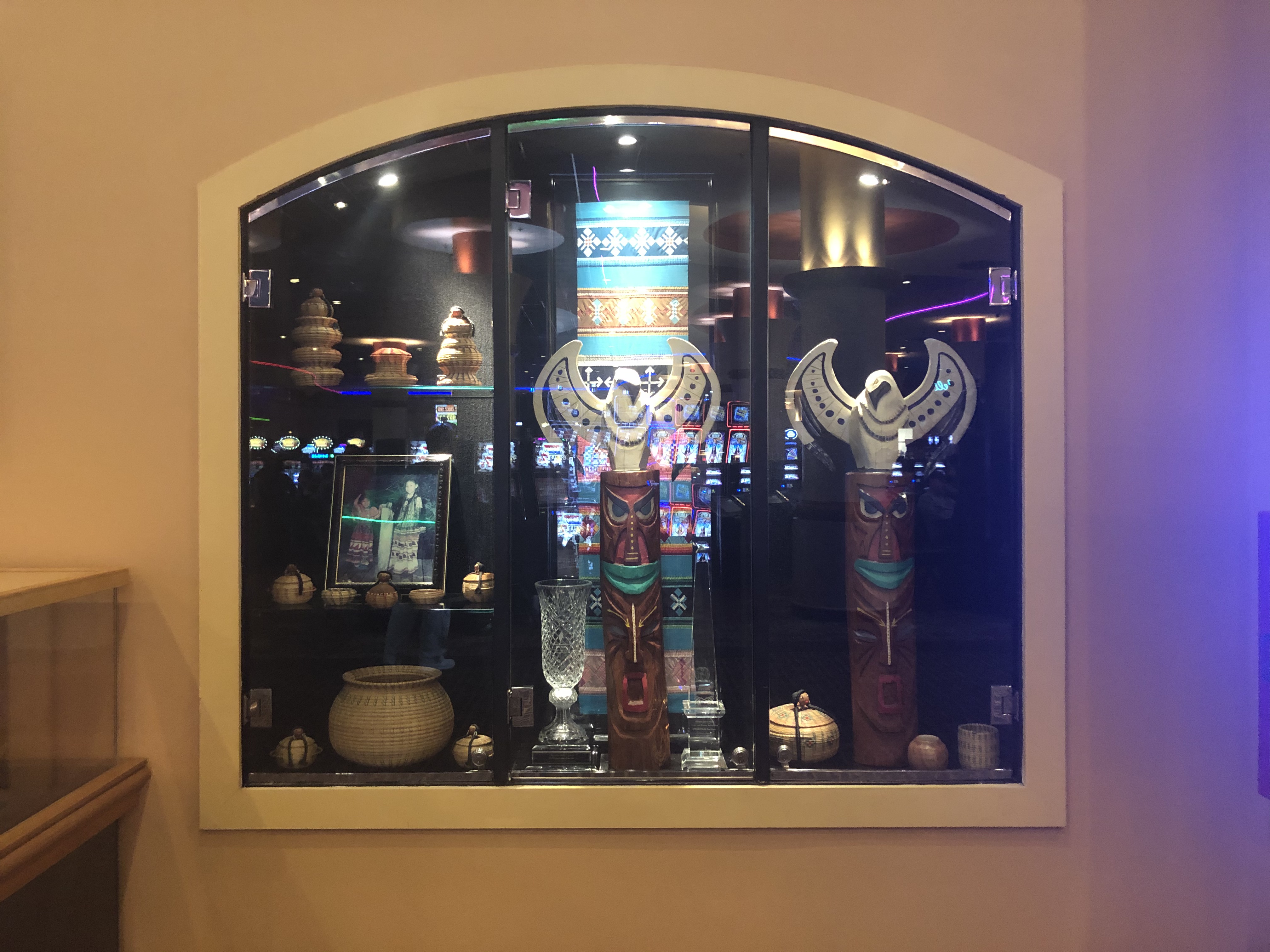 I went to the Miccosukee casino on a dreary day, cold and rainy. Not surprisingly, many people had chosen to come to try their luck. Or maybe it is equally busy, rain or shine.

Here’s what greets you in the lobby: 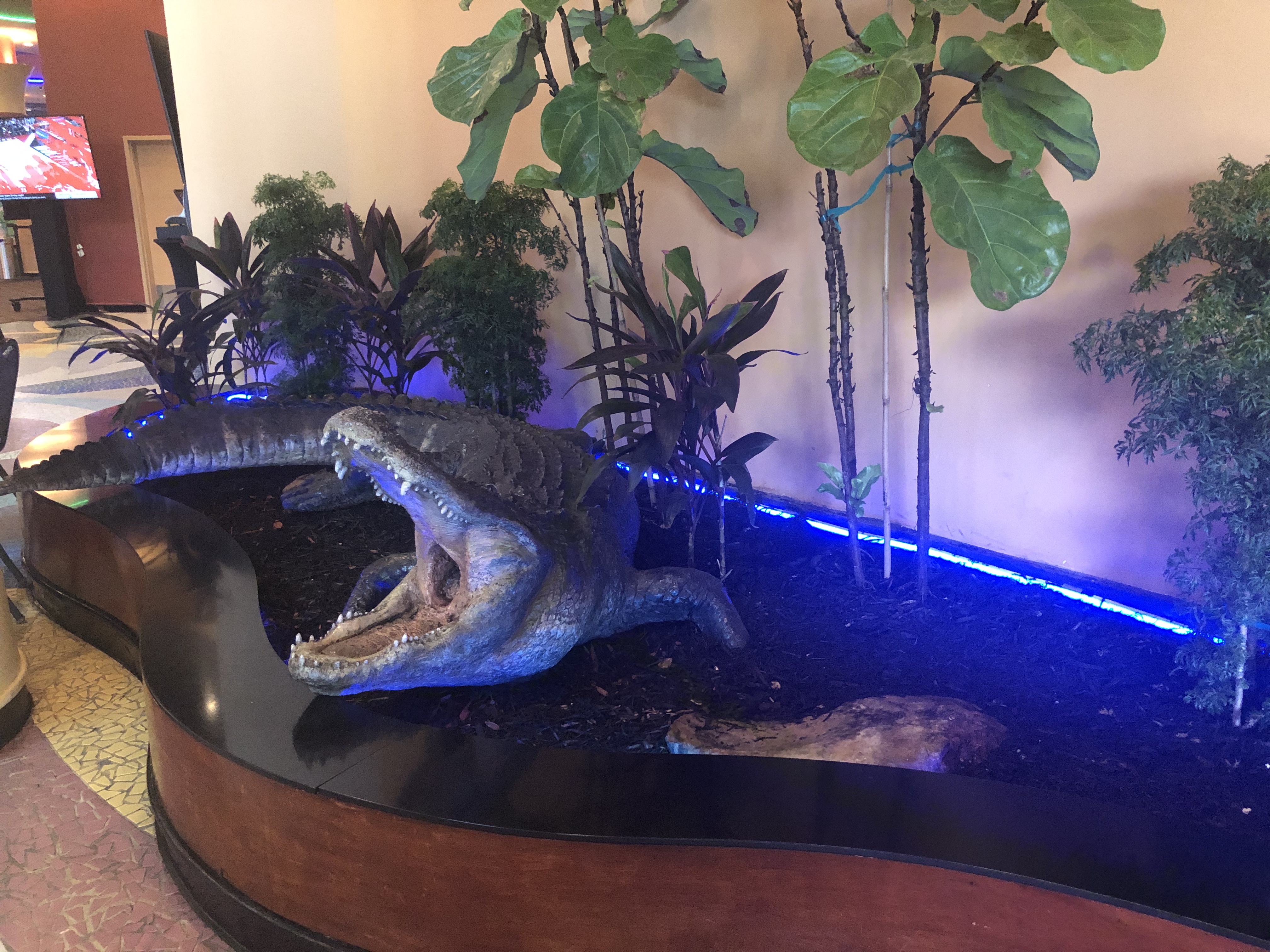 First, Native Americans secured the rights to have casinos on their tribal lands in 1988. For the tribal nations in the U.S. as a whole, casinos generate a revenue in the neighborhood of $27 billion.

Second, I’m in the midst of writing Book Two in my Buy Me Love Shapeshifter trilogy. The title is Money for Nothing. The main characters are werepanthers. They live in South Florida. And they are in (an obviously fictitious) genetic lineage with Native Americans. Specifically, the Miccosukee of the Everglades.

As I’ve just pointed out, casinos are a major source of income for Native Americans. Naturally, my werepanthers own a casino resort complex. Thus, my need to check out the ones in my area.

Gotta say: I love my job. The research is tons of fun!