Serbia is to the east of Romania, my point of reference: 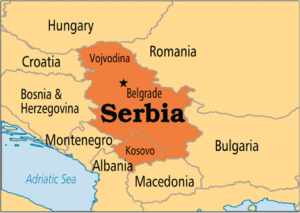 I spend summers in Bucharest, Romania, and when Phillip was in Spain, he suggested we meet in Serbia. It’s always great to visit a lively city, and Belgrade certainly fits that bill. See: my blog Belgrade. But it’s also good to get out of the capital and into the rest of the country.

In terms of square kilometers, Serbia is a little bigger than West Virginia and has a population of about 7 million. It was once part of a much larger political unit, namely Yugoslavia, but this confederation of cultures and ethnicities splintered over the course of the 1990s.

For our day trip we chose to go north to the autonomous province Vojvodina. In the map, above, no dotted line separates this province from the rest of Serbia. However, Vojvodina has its own Prime Minister and its own Parliament. The European Union is watching this region because it is the second largest producer of food for the EU. (Serbia is not on the euro and not in the EU.)

In addition, there are 6 official languages: Serbian, Hungarian, Slovak, Romanian, Croatian, and Pannonian Rusyn. (Like me, you’re probably wondering what that last one is. Look it up! I just did.)

The population of Vojvodina is 2 million, and its main city is Novi Sad. This city was a delightful surprise – classy buildings, extensive pedestrian zones, and a great vibe. It was raining that day, but what’s a little water? The Serbians have a saying: “I’m not sugar, so I won’t melt.” 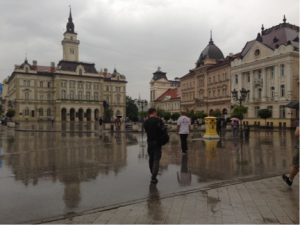 There are 3 more things to say about Novi Sad:

1) It was once considered the Athens of Serbia in that it was a center of high learning;

2) The Petrovaradin Fortress overlooking the city is home to the EXIT Music Festival, which happened a few days before we arrived. 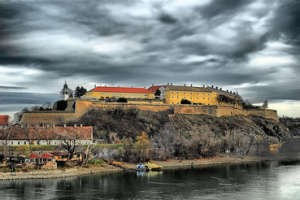 The festival began in 1999 as a student protest against Slobodan Milošović, then President of the Federal Republic of Yugoslavia. It has evolved into a dance music festival with 80% British participation and – if I understand correctly – great quantities of ecstasy.

3) This fortress made Novi Sad the Gibraltar of Central Europe. Located as it is on an island in the middle of the Danube at the entrance to the city, the Turks simply couldn’t get past it in their push to get to Vienna. Mission Impossible. Didn’t happen.

Turning to more peaceful matters, we had lunch near the base of the fortress at a charmingly rustic fish restaurant, Ćarda. 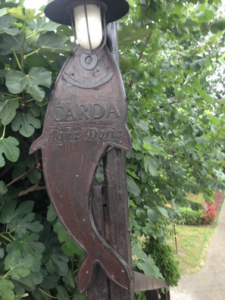 with a lovely garden – atmospheric in the rain: 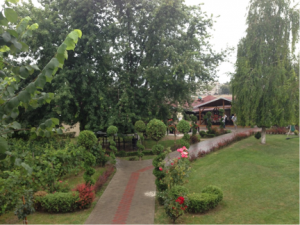 Fish stew is the specialty. 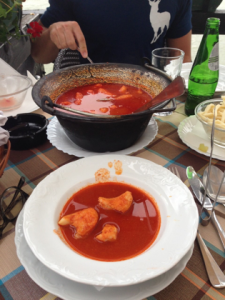 The color comes from paprika (not tomatoes). The yellow things in the bowl (half pictured) with the tongs are either cheese or noodles or a cross between the two. We figured they went in the stew – maybe?

Before arriving in Novi Sad, when the weather was still sunny, we stopped in the village of Sremski Karlovci, a perfect Austro-Hungarian town if there ever was one. 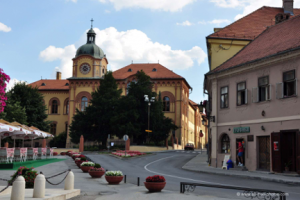 Main Square – the yellow and brown building is a language high school, which draws students from all over the country

One highlight of the day was our visit to the Museum of Beekeeping and Wine Cellar just outside of Sremski Karlovci. It turns out Professor Jovan Zivanovic in the 19th century figured out how to get honey from beehives without having to kill the bees in the process. Here is the first modern beehive, which he dubbed Americanka ‘American Lady.’ 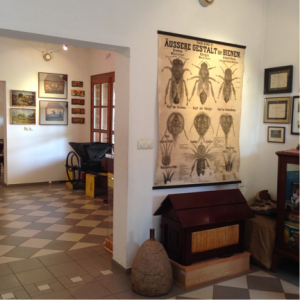 Americanka is the wooden box on the floor below the bee chart hanging on the wall. Next to it on the floor is the old-style beehive

We were also treated to a wine tasting. We had a total of 7, both reds and whites, and ending with an 8th honey brandy. Serbian wines are delicious. 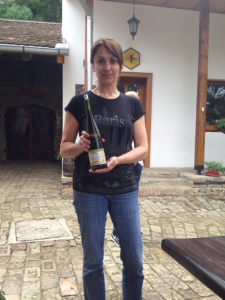 Here is our hostess with a bottle of Riesling. Note the bee above the door. 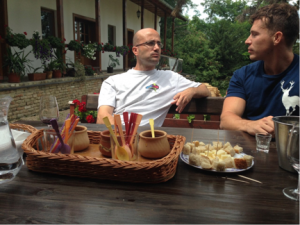 Phillip with our guide, Vladimir. In the basket are pots of sesame honey, meadow honey, and a thick yellow api-complex, all delicious with the added benefit of being healthy.

Storks are big in the region, and they tend to build their nests on top of telephone and electricity poles (just like in Romania around the Danube Delta). 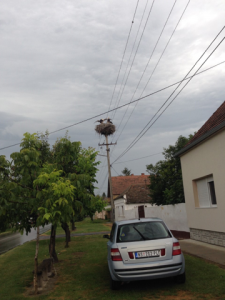 The Serbian word for stork is roda. Naturally, once having learned it, I was excited to see a supermarket chain with the name and a stork beak R 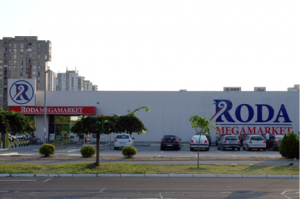 Although Serbian is traditionally spelled in the Cyrillic alphabet, the Latin alphabet is pretty much everywhere, interspersed.