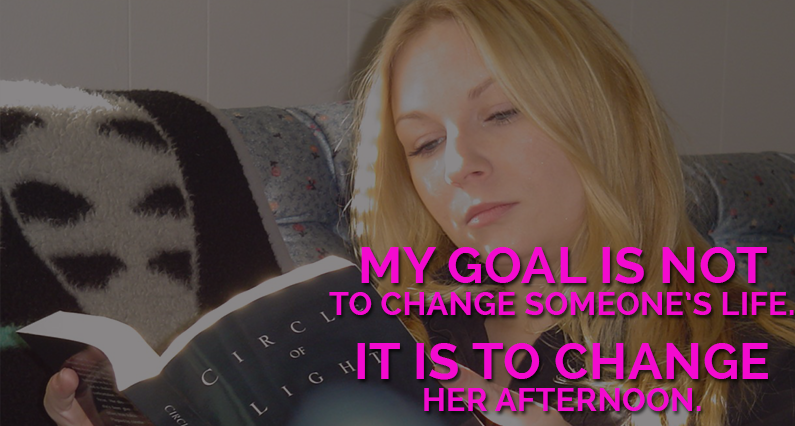 Romance novelists and avant-garde artists also presumably differ in the extent of the cultural impacts of their productions.

The impact of avant-garde art might not be felt in the general public for decades. For instance, the auto-destructive art movement that followed in the wake of World War II didn’t find popular appeal until The Who came along over twenty years later and started destroying their instruments on stage to the delight of their audiences.[2]

By way of contrast, the impact of a romance novel might be on the day it’s read. As one romance writer once said, “My goal is not to change someone’s life. It’s to change her afternoon.”

This statement has a light-hearted modesty. It also bears examining because of that modesty and the rather darker emotional place it arises from: the interiorized negative cultural valuation of the romance novel that requires the writer to make a reduced assessment of the impact of her production. The implication is that another type of writing/art has grander aims and larger transformative possibilities. If there weren’t such an implication, the statement could not be made as it is.

By the way, I am completely sympathetic to the emotional place the romance novelist’s statement comes from. I dwelled there for many years. But I’m not there anymore, and I now ask:

1) Could not changing someone’s afternoon produce a butterfly effect, such that a small change at one moment can result in a large difference later on? A reading experience might have any sort of value to the reader. A couple hours of quiet, enjoying a story, might make a person more ready to take on the other tasks in her life, which may or may not have other payoffs down the line.

What I will not say is that the person has necessarily picked up a romance novel in order to escape from the humdrum of her life, the dissatisfactions with her husband, sexual frustration, etc. etc. People do all sorts of things to distract themselves from whatever causes them to seek amusement: play a video game, watch an episode of (or a binge-watch) House of Cards, drink a glass or two of wine, solve a Sudoku, read The Great Gatsby, the list is endless. It cannot be that only one literary genre bears the weight of acting as a dissatisfaction sop, while other genres serve different and/or better purposes.

2) Has The Great Gatsby ever changed anyone’s life, in the sense of ‘caused a transformative understanding of one’s self and place in the world’?

3) To what extent do artists have access to the impact their work produces in others and in the culture over time? Yes, the statements artists make about their work are relevant and often more informative about how to interpret their work than the critics’ assessments.[3] However, I would feel more comfortable about the stated goal of transforming a reader’s afternoon if Nabokov had made it about Lolita – which may accurately reflect the impact of reading Lolita in many readers’ lives. Why is it only a romance novelist feels the need to express such modesty?

Which brings me to the real question:

4) Is it out of bounds for a romance writer to be an avant-garde artist?

Another way to ask this is: What are these categories? The romance genre cannot be reduced to a flat, where all examples of it count as the same, any more than the broad category ‘modern art’ and then the narrower ‘avant-garde art’ can be reduced to a flat.

Although the literary world recognizes a category of ‘experimental fiction,’ it pays no attention to romance, and the romance industry has it own labels: Regency, paranormal, etc. Thus far no romance writer has self-identified as being in the avant-garde, but it would certainly be possible for one to understand herself as working at the leading edge of a vision that will impact other cultural forms in the future.

At the moment, I see myself in the rearguard, surveying a vast cultural landscape. I’m poised to switch perspectives.

[1] See The Romance Novel as an Art Form.

[2] This understanding of The Who’s concert performances comes by way of art historian, Kristine Stiles.

[3] Once again I credit Kristine Stiles for having taught me this.