Just this week alone I’ve encountered three new (to me) climate change names. And, by the way, they are all three terrifying.

Now there are derecho storms? What in the heck?

I first heard about them a few days ago when they hit Iowa. The title image for this blog was posted online four days ago. It shows a derecho storm in neighboring Illinois.

A derecho storm is a widespread, long-lived, straight-line rain storm. It must have winds of at least 58 MPH and leave a wide swath of damage.

The straight-line part of the definition must account for the name. Derecho is Spanish for ‘straight.’ So the word in English counts as a linguistic borrowing. And, yes, the winds blow straight across. Holy Smoke.

I immediately thought these were a new phenomenon. Likely due to climate change. However, way back in 1877 a scientist by the name of Dr. W. Koeppen first identified these storms. So they are not super new. But they may be becoming more frequent and perhaps more severe.

In any case, Koeppen knew that “Twister of the Prairie” had the name tornado derived from Spanish tronada ‘thunderstorm.’ So, he reasoned this other type of storm should have a similar linguistic profile. Good job!

The word firenado comes to us this week from California. It is a linguistic blend. And we are currently in the Golden Age of Blends. (According to me.)

A blend is a word formed from parts of (usually) two others. The process started earlier in the 20th century with words like ‘brunch’ ( breakfast + lunch) and ‘motel’ (motor + hotel). It gathered steam throughout the decades. And now there is a non-stop explosion of them. Example: from documentary we now have rockumentary and mockumentary. The last one spawned mockbuster. And these days we are all completely familiar with webinars. Blends occur in all parts of speech, e.g. the adjective ginormous.

For more, see: Duke Magazine 25 on 25 and scroll down to American English

Back to California. Remember the Sharknado movie series? It featured waterspouts that lifted sharks out of the ocean and deposited them in Los Angeles. The term firenado works as a logical extension of the pattern of naming disasters. Plus a tornado of fire really does spin within the fire. Listen to the description and watch in amazement:

We head down to the Gulf Coast to look at the Fujiwhara Effect. This effect appears when two hurricanes collide.

The name is an eponym, meaning that it derives from a person. The person at issue is Sakuhei Fujiwhara, a Japanese meteorologist in the early part of the 20th century, who studied the phenomenon.

(Eponyms are more common than we sometimes realize. There really was a guy in the 18th century named Etienne de Silhouette. He did not make black cutout figures himself. But his name became associated with them.)

The Fujiwhara Effect burst into the news a few days ago when Marco and Laura were forming in the Caribbean. Speculation immediately arose about the danger posed by them colliding. Fortunately Marco weakened and became a Tropical Storm. Unfortunately Laura is forecast to strengthen into a Category 3 hurricane when it makes landfall on Thursday. 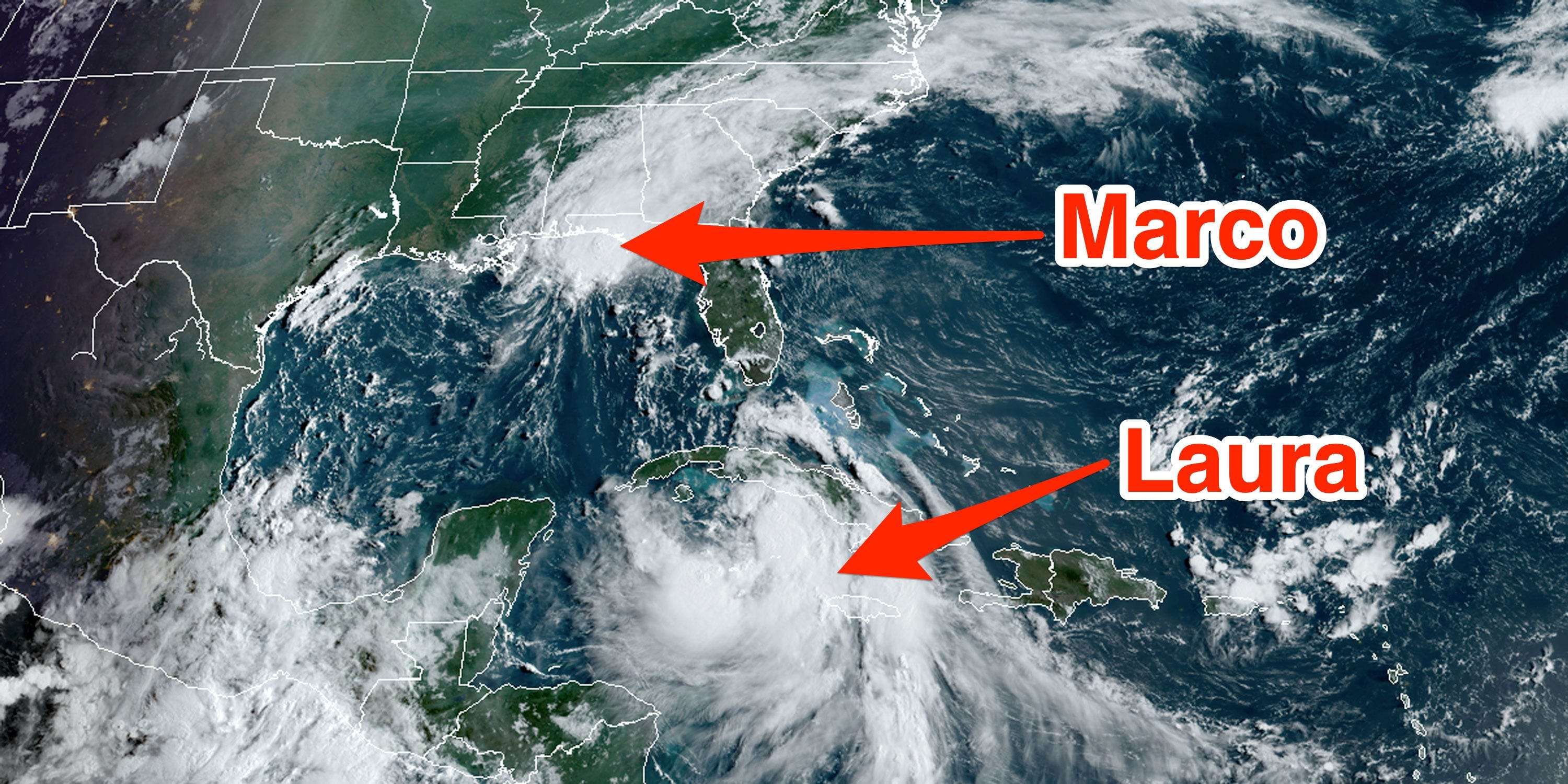 At least the two didn’t collide. But Laura looks to be bad. I understand that two hurricanes at once has been an extremely rare occurrence. But, maybe, not any more.

So, let’s put a check at: Water

We have Wind, Fire and Water. What’s left?

Let’s just get through this week first before worrying about a new and terrifying earth-related climatic phenomenon. (I’ll file whatever is happening to the Arctic Ice Sheet this week under the category of Water.) What I do know is that we have the linguistic resources to name whatever happens next….

(I just lost a rather lengthy struggle to end on an optimistic note.)