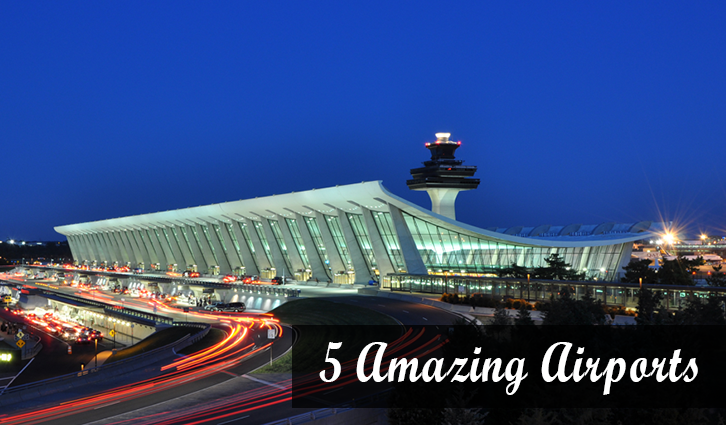 Believe it or not, I hate to fly. Really hate it. But I do it. The good news is, there are plenty of amzing airports I actually like. I like the energy of airports. I like seeing all the places listed on Arrivals and Departures. Jakarta? Vladivostok? Hey, maybe!

There are plenty of amazing airports in the US. I’ll let you think of the ones you like best. My Top Five here is for airports outside the US. I haven’t been everywhere so my list is completely idiosyncratic.

I chose this because:

1) I went through it in 2014 and was surprised that such a relatively small city had this big new glass-and-steel airport; I chose Baku because it has great architecture from all its various periods – including the Sultanate and the late 19th century – and its modern architecture deserves notice.

I’ve never been to Thailand – only through the airport.

On my way from Japan to Malaysia in 2016, I thought, “Wow. If the airport is this good, what’s the country like?” They do their cultural heritage up big. This perhaps is the first time an airport has sold me on going to the country.

Last month on my way from Japan to Kazakhstan I flew Asiana Air from Osaka to Seoul. The Seoul airport also does up Korean heritage. Some kind of procession went through the main concourse. It stopped at the Korean Cultural Center. I have no idea what it was about, but it turned into a photo op. The amount of regalia developed all over the world never fails to amaze me. Humans love to decorate themselves

From Wikipedia: “Since 2005, [the Seoul airport] has been rated the best airport worldwide by Airports Council International every year. It is also rated as the world’s cleanest airport and the world’s best international transit airport by Skytrax.

The airport has a golf course, spa, private sleeping rooms, an ice-skating rink, a casino, indoor gardens, and a Museum of Korean Culture.”

Uh … didn’t see the golf course or ice-skating rink but don’t quite think I missed anything.

The airport is nothing special from the outside, and in choosing it as #1 I’ve made a sentimental pick, since I’ve been through it many, many times.

My ranking comes down to the business lounge: Turkish Airlines is really good so I’ve flown it a lot, and the Turkish Airlines Business Class Lounge at the Istanbul airport is way better than the Air Asiana Business Lounge in Seoul. (Maybe the Koreans figured everyone would be at the casino, golf course or skating rink.) The food bars are amazing for their variety, and every kind of drink in the world is available My return to the US in August is through London-Heathrow and then JFK. I likely won’t enjoy the flights much, but I will enjoy the amazing airports!

I’m sure you have your own list of amazing airports – I’d love to see it.

This just in from CNN: apparently the Oslo airport is where it’s at.