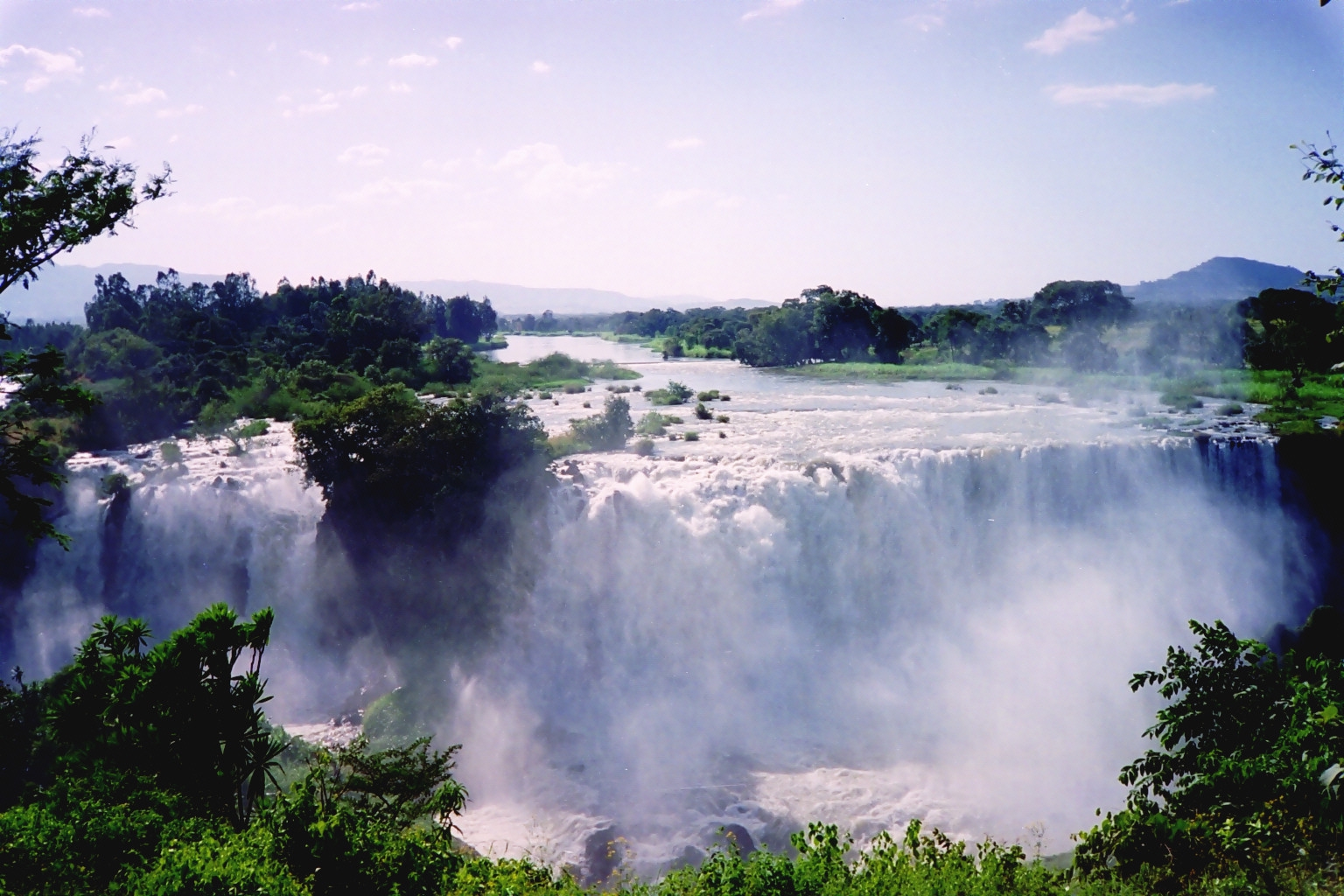 From Addis Ababa we made a quick 45-minute plane hop to Bahir Dar to the north. One of the attractions of the area are the Blue Nile Falls, pictured in the title image.

A good hour or more outside of town we bumped along an unpaved road (aka “an African massage”) on our way to see the legendary Blue Nile and the associated falls. Traffic jams were created by cattle: 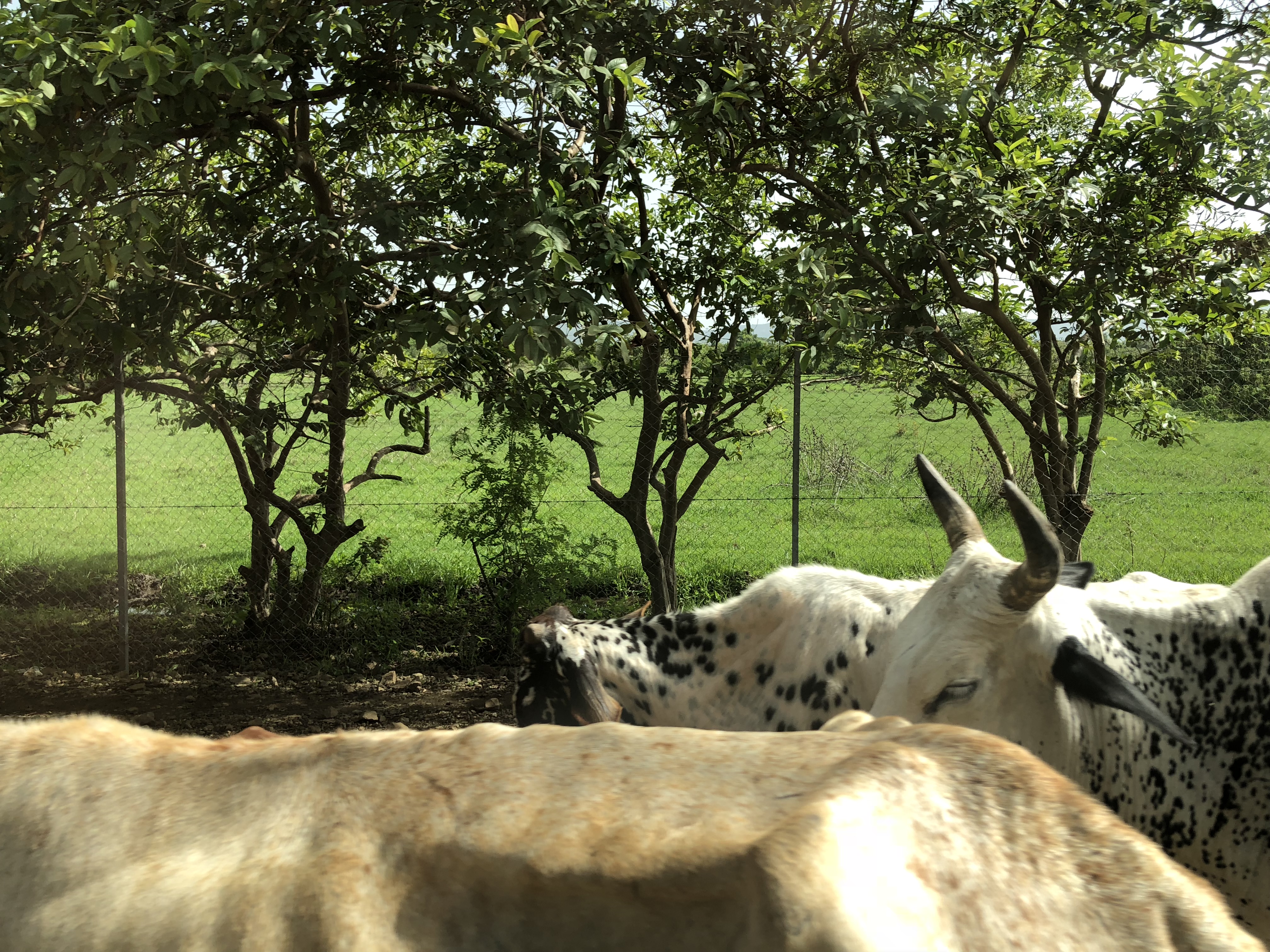 The houses are wooden: 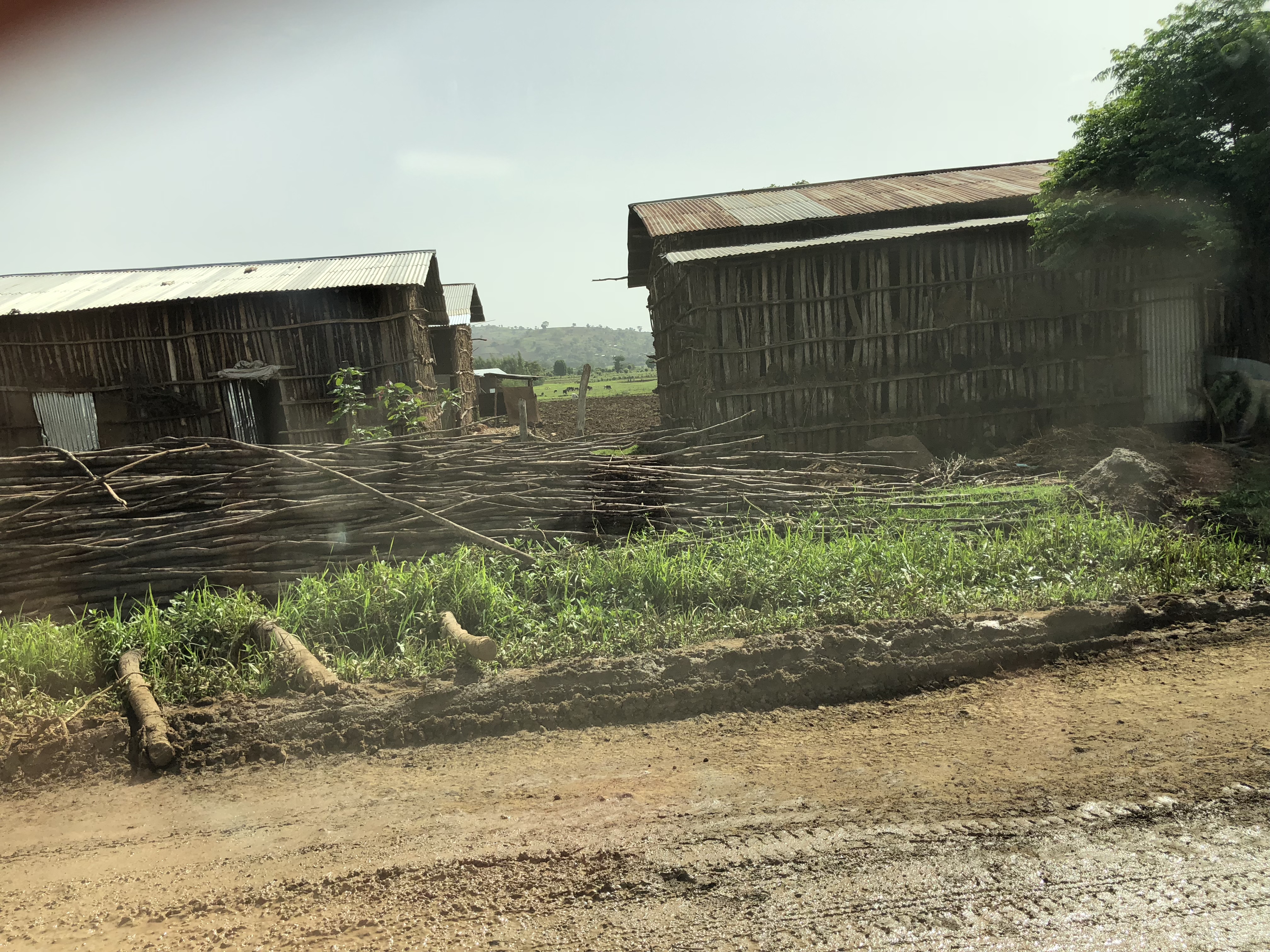 We arrived to see the legendary river and took the ferry across to a foot path: 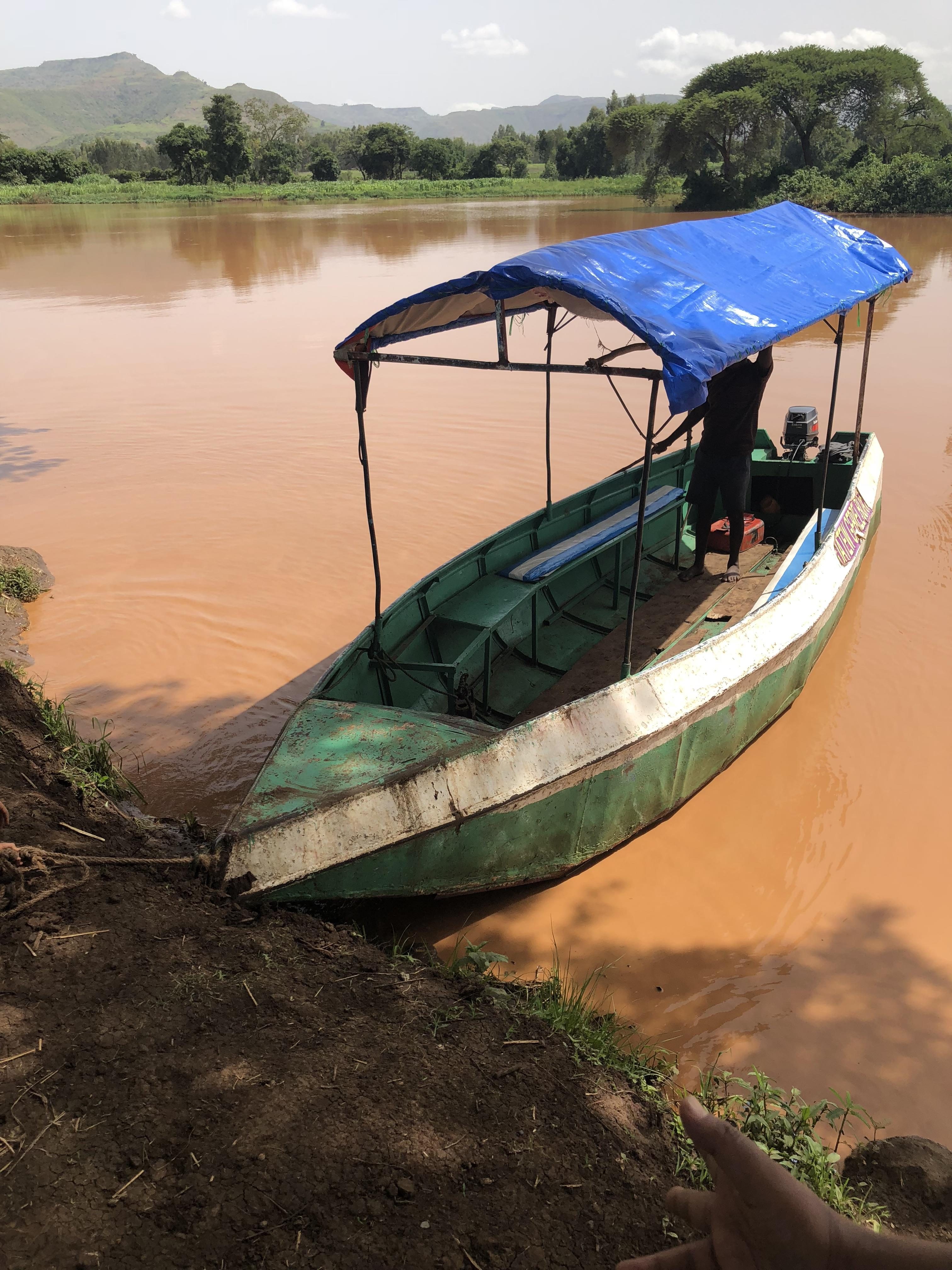 It’s rainy season and the rains dredge up all the sludge, hence the muddy red color.

We came upon the falls: 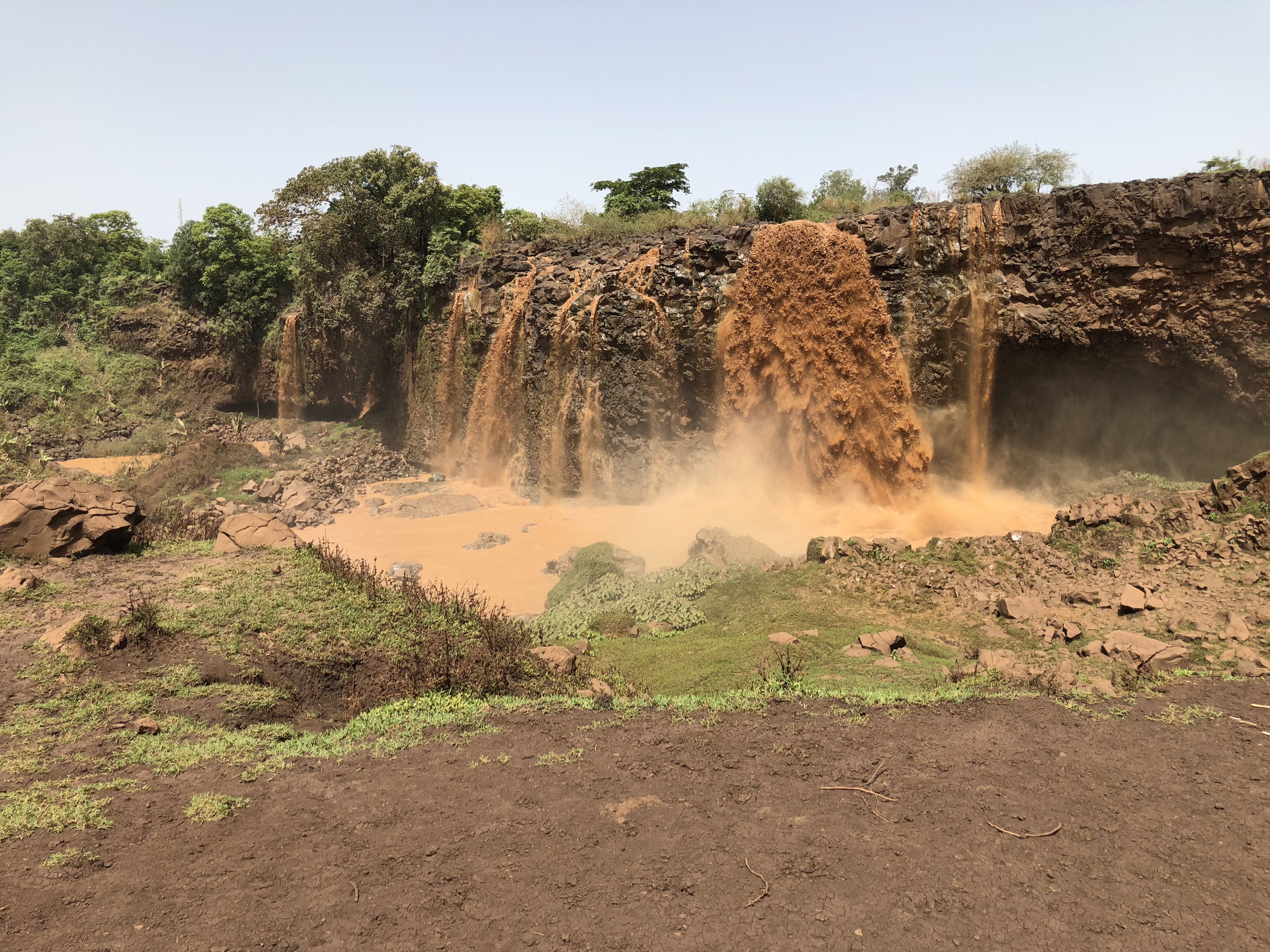 What you see in the spectacular title image are the falls before 95% of the Blue Nile was diverted to a dam to produce hydroelectric power.

Only one word to describe the experience today: Disappointing.

Along the way we saw fields of chat: 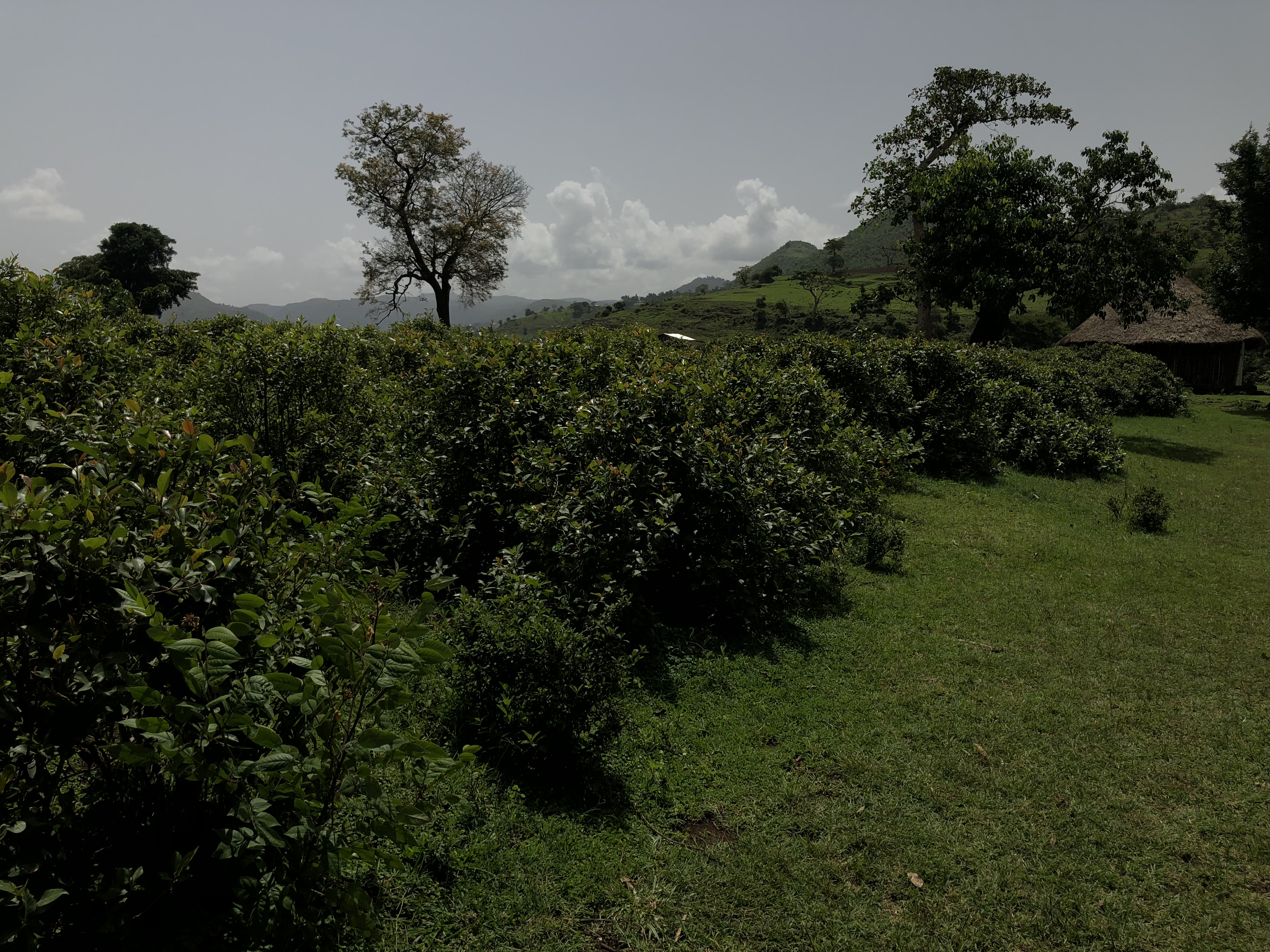 If you chew the youngest leaves of the chat bush you can get a high equivalent to marijuana. You need to chew at least 50 – 100 of them, however. I tried two and got nothing

Phillip and I mused long and hard about the encounter of the traditional world with the forces of globalization. Here is a traditional village along the Blue Nile with an open garbage pit in its backyard: 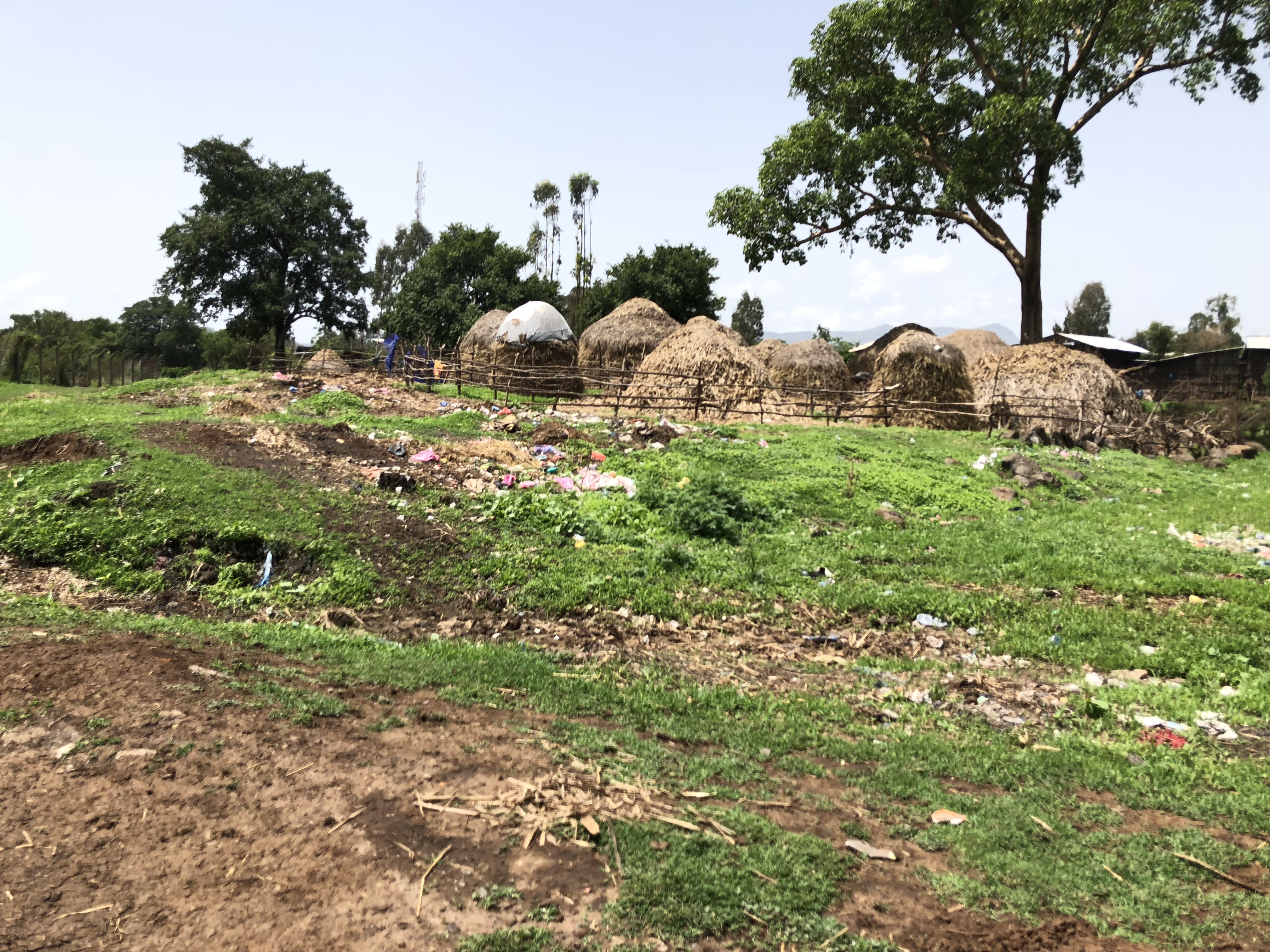 In the past 10,000 years traditional cultures around the world have worked out everything. They have their building methods suited to the local climate and available building materials. Their agricultural and herding practices are in harmony with their diets. Their clothing – again, the world over – is beautiful and distinctive, along with their music and dancing and all other arts. Traditional villages form their own ecosystems.

Now add plastic bags and bottles to age-old composting practices … and you have open garbage pits with items that do not decompose.

It is the contrast between the traditional and the new that creates the sense that traditional cultures are impoverished. Before globalization traditional cultures would have been considered “normal.” When plastics and satellite dishes and overstocked T-shirts begin to muddy their shores and there are no organic practices in place for dealing with such things, the result is often an unsightly mishmash.

I realize my reflections are hardly new. Nevertheless, traveling through this region of Ethiopia which must truly have been – and still is – the image of the Garden of Eden with its greenery, plentiful water and sense of abundance, I was struck anew by the paradox of the perception of a population’s poverty in the midst of the richness of their natural resources and traditional ways of life.

Bahir Dar nestles on one shore of Lake Tana, Ethiopia’s largest lake. We ate at a delightful local restaurant: 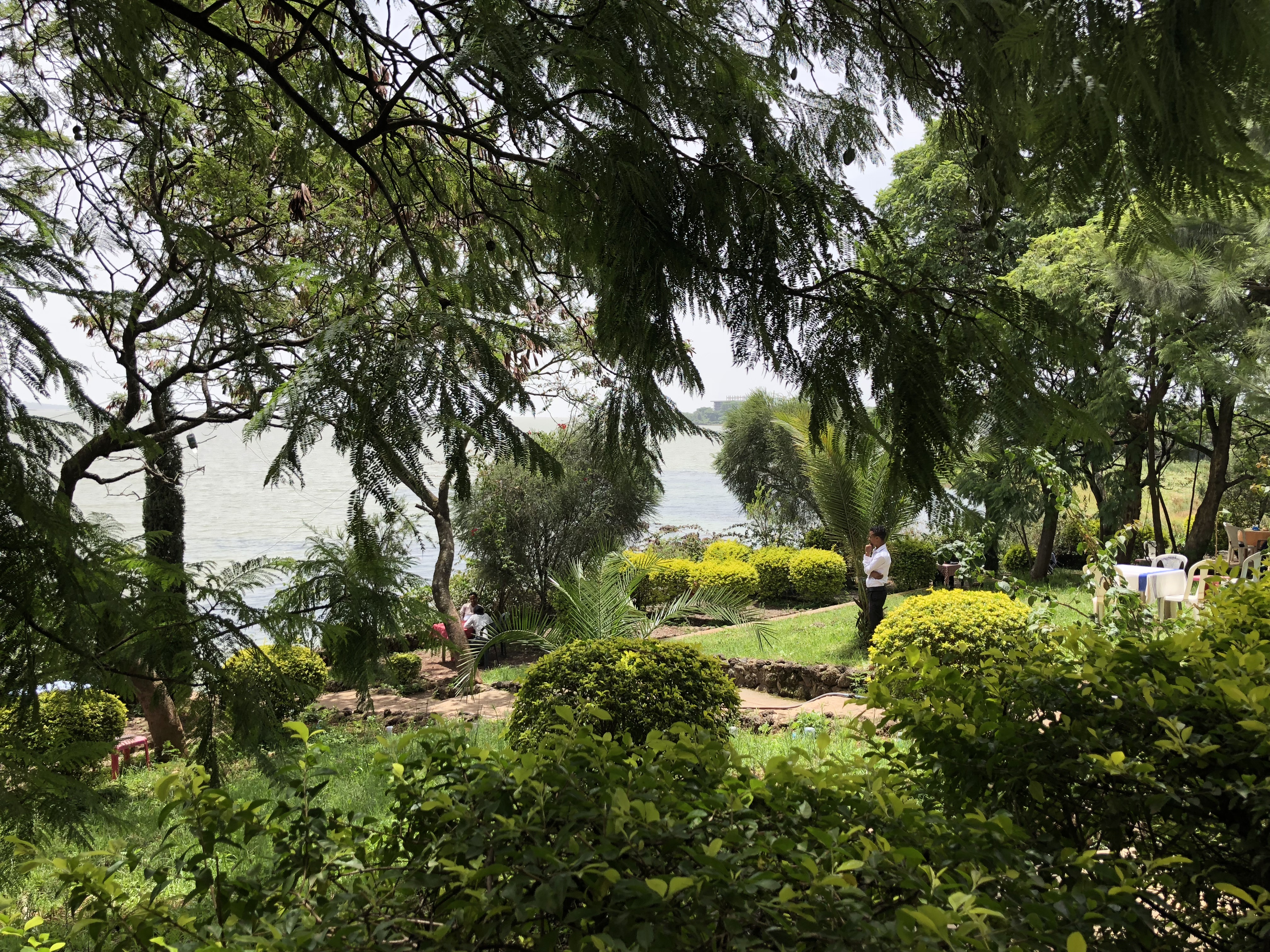 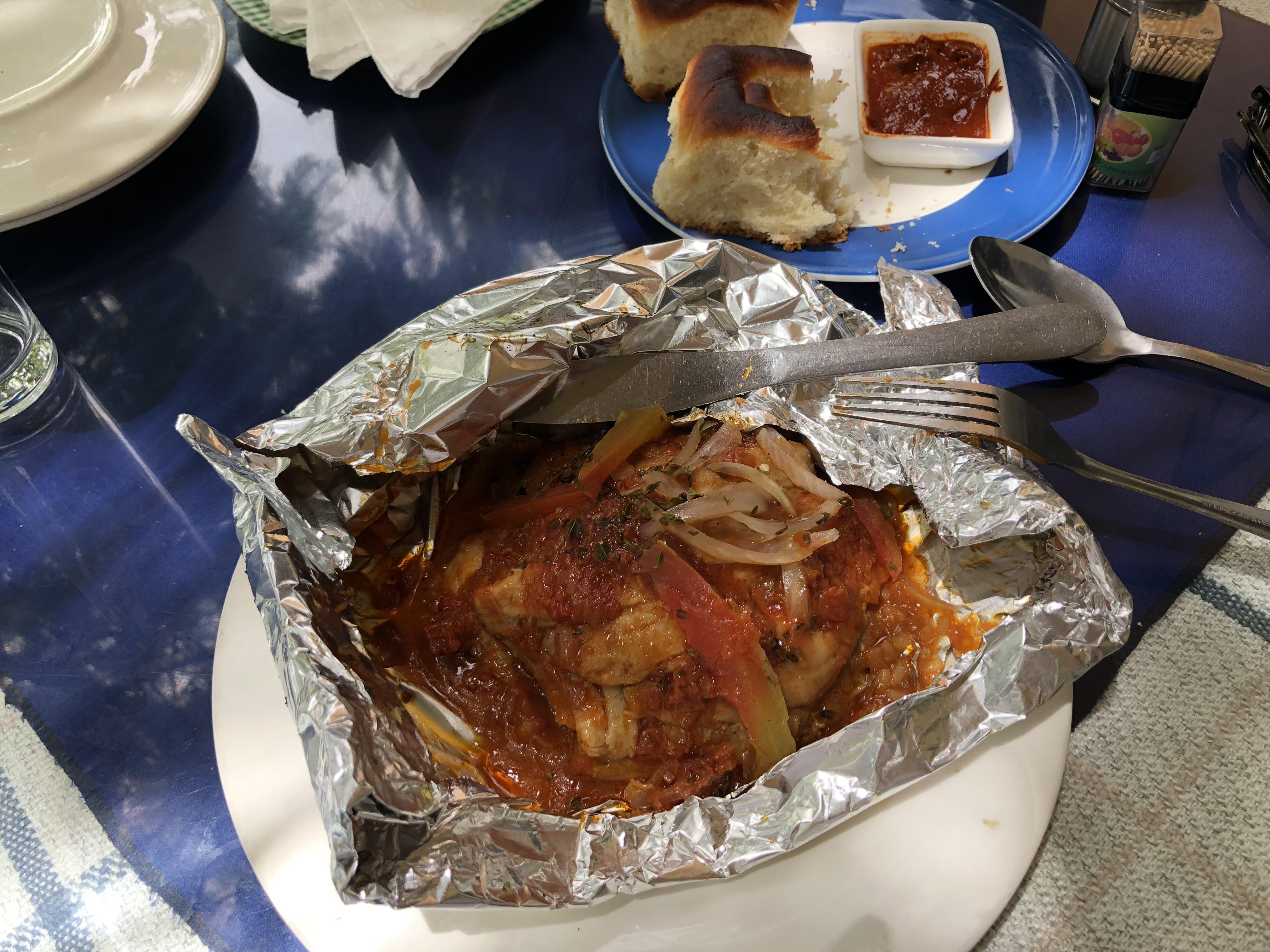 Then it was off across the lake 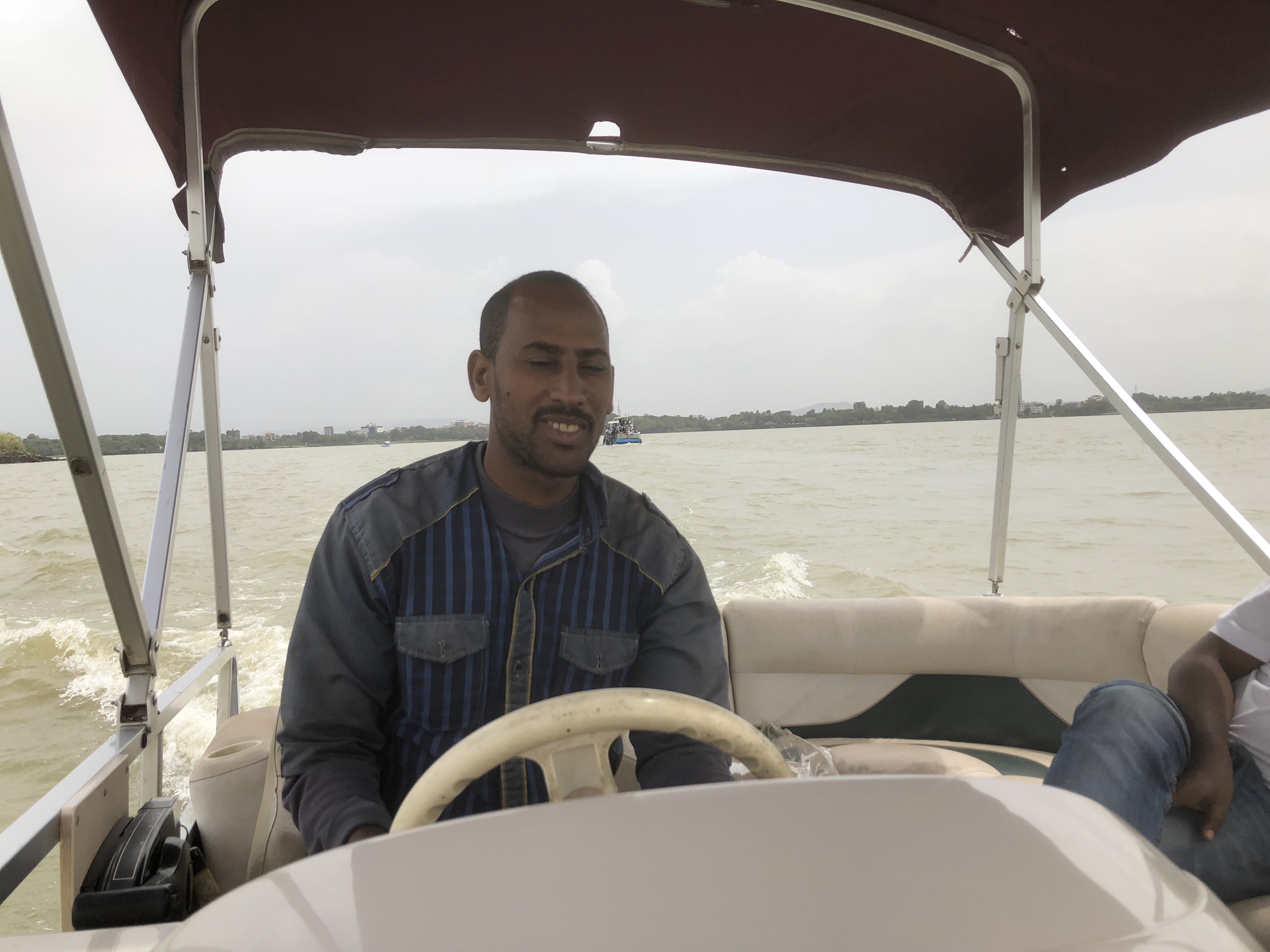 to a peninsula to the Azwa Marian monastery from the 14th century. The main church is round to symbolize unity: 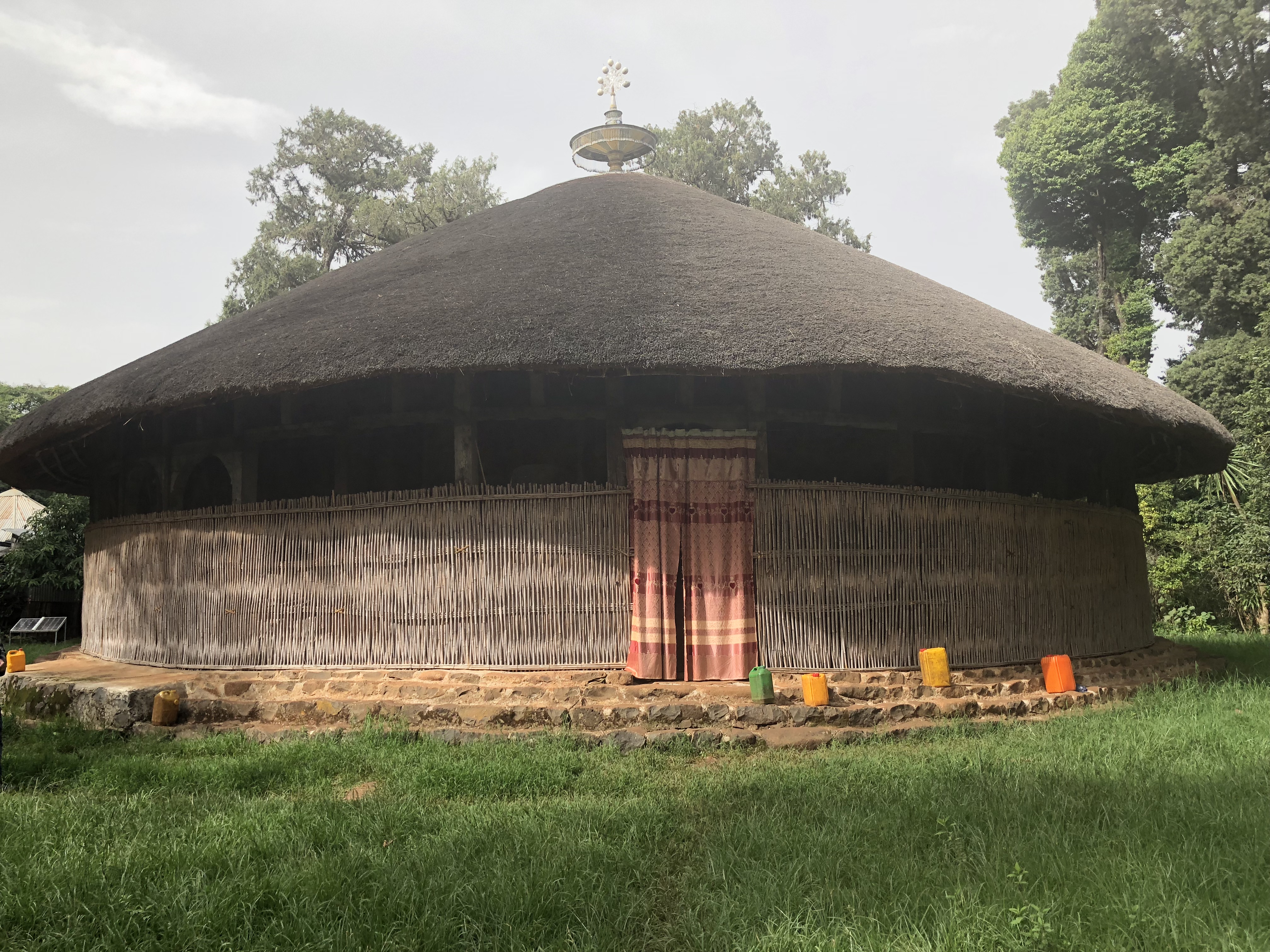 The thatch roof is a work of art. Note that there is a round thing sticking up at the very top. It is bedecked with seven ostrich eggs. Why ostrich eggs? Are there even ostriches in Ethiopia? I don’t know

The wood latticing seen from the interior is a thing of beauty. 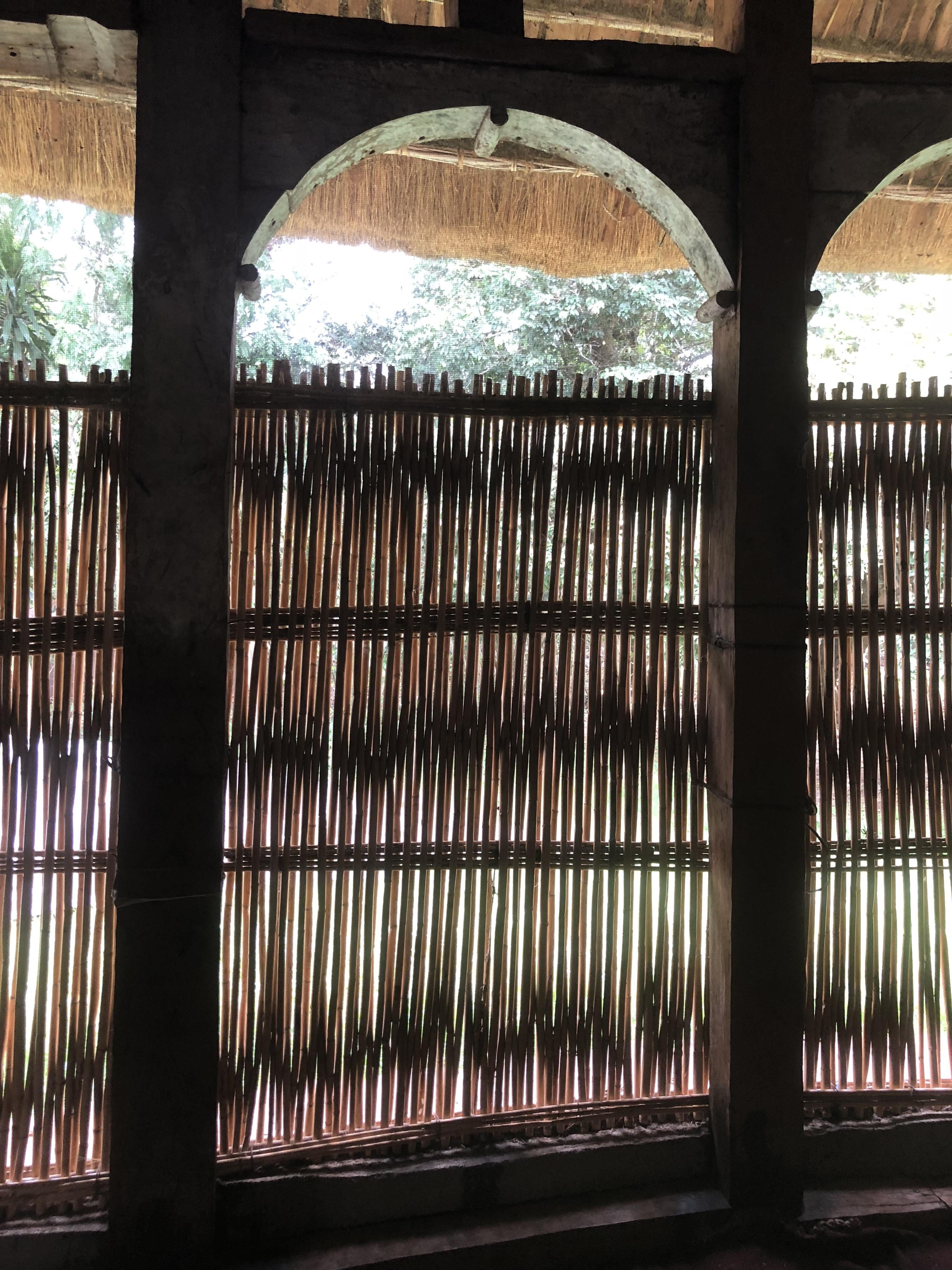 It’s hard to believe this structure is over 700 years old. Maybe it’s 17th century, rather than 14th. But, still, even a more recent time depth makes this wooden structure extremely durable

All churches has three sections of the interior: the outer ring, an inner ring and then the sacred space for the Arc of the Covenant only holy people see. Here is a cross-section of the outer ring which gives you a glimpse of how the eaves of the roof are constructed: 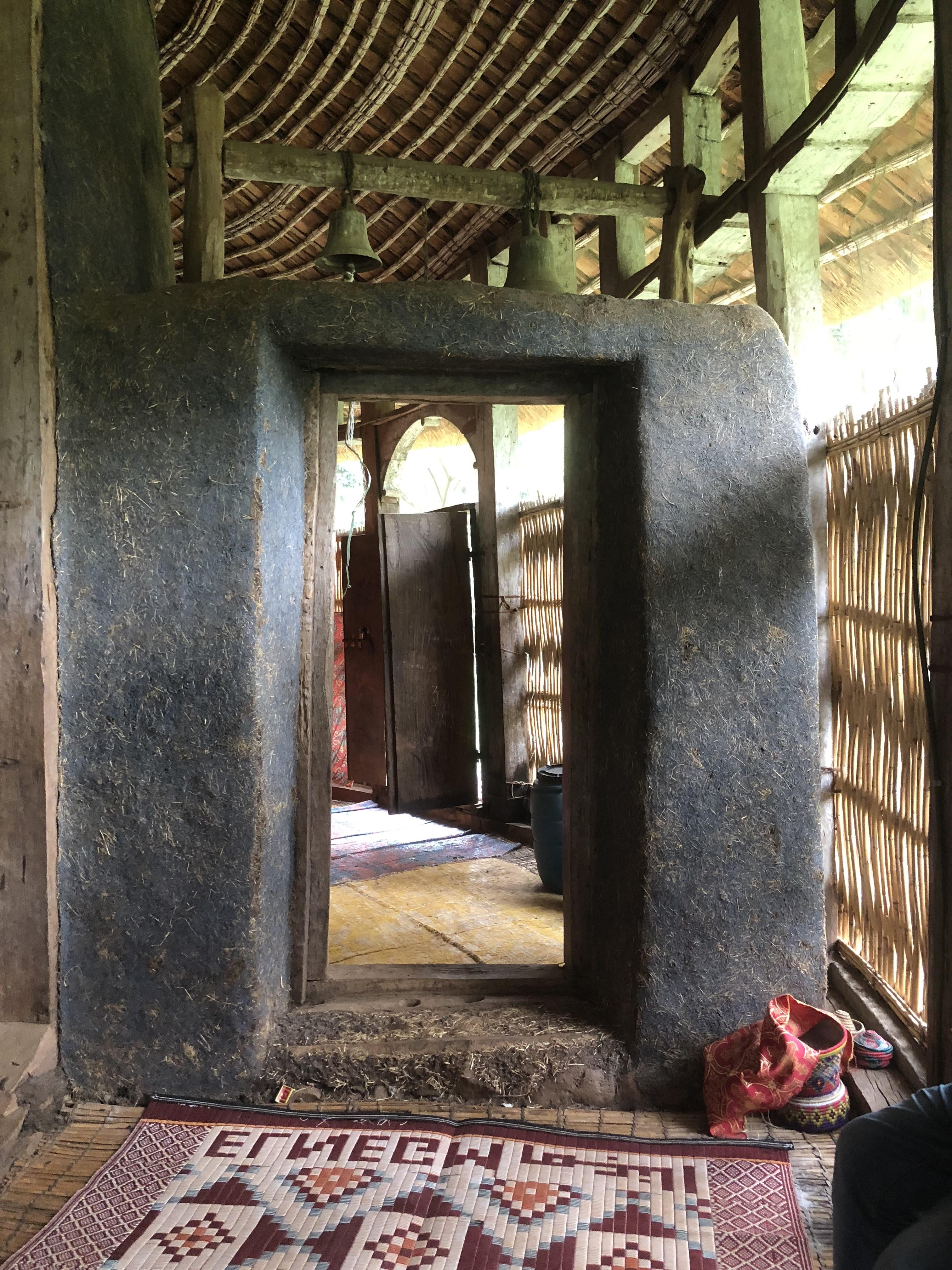 Every flat surface is painted: 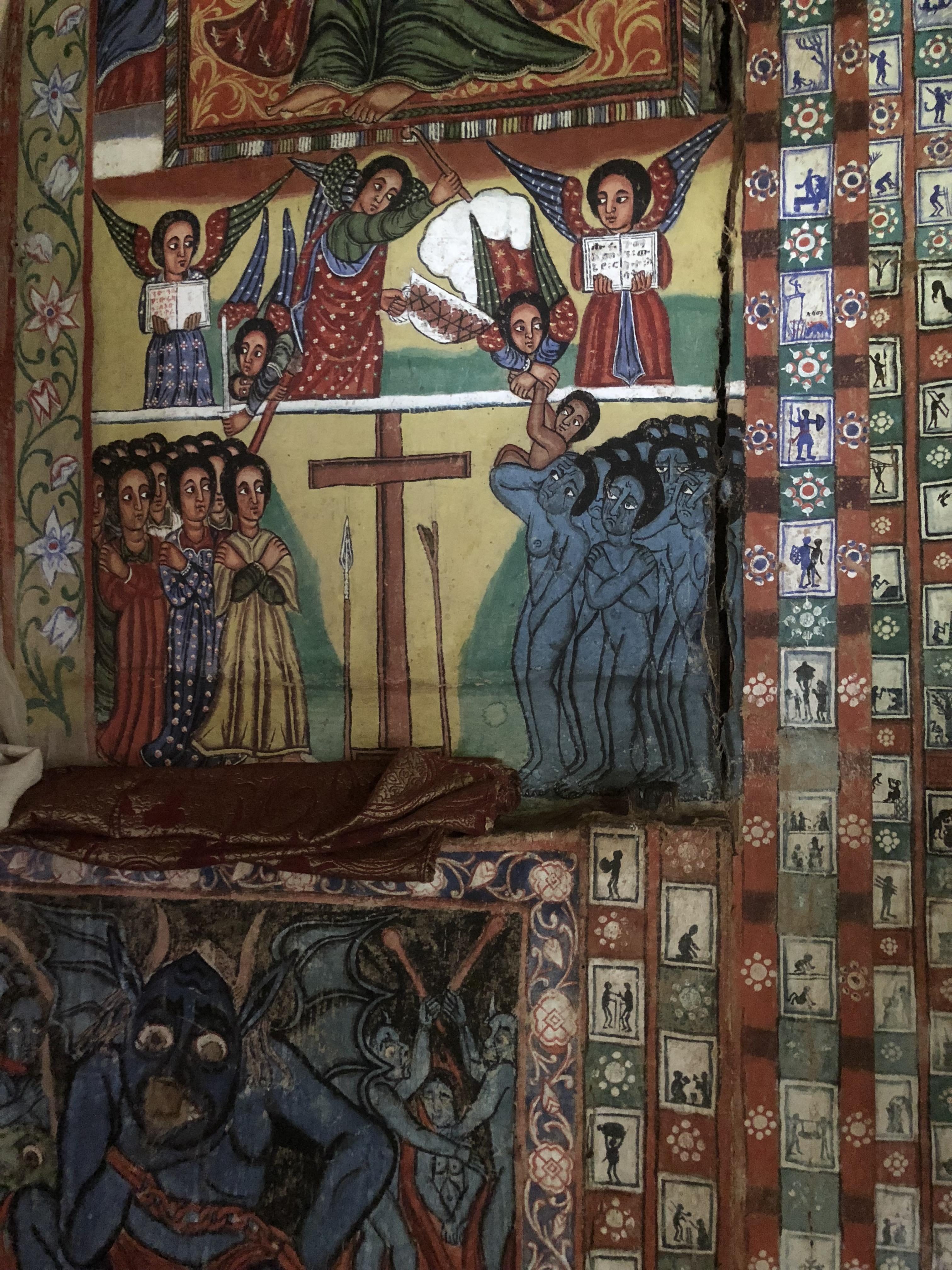 The naked blue people (the non-believers) are going to Hell

I acquired a fetish for doors made out of fig tree wood. 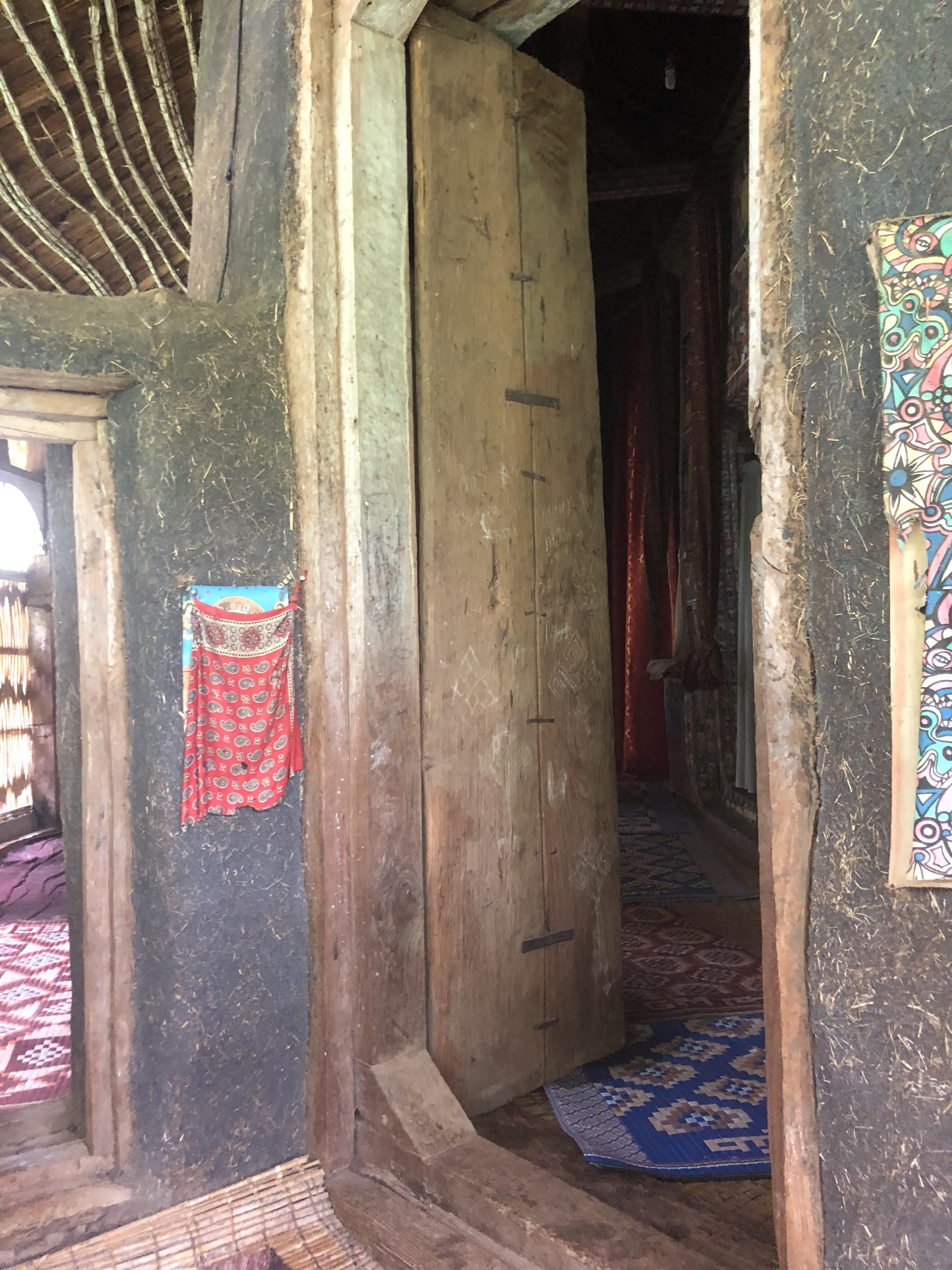 After our visit we had to brave the gauntlet of souvenir sellers between the monastery and the pier. I succumbed and bought 4 scarves.

On the way back we went hippo watching. In the image, below, you have to look closely in the middle/center of the water not far from the land in the background. You see just the head: 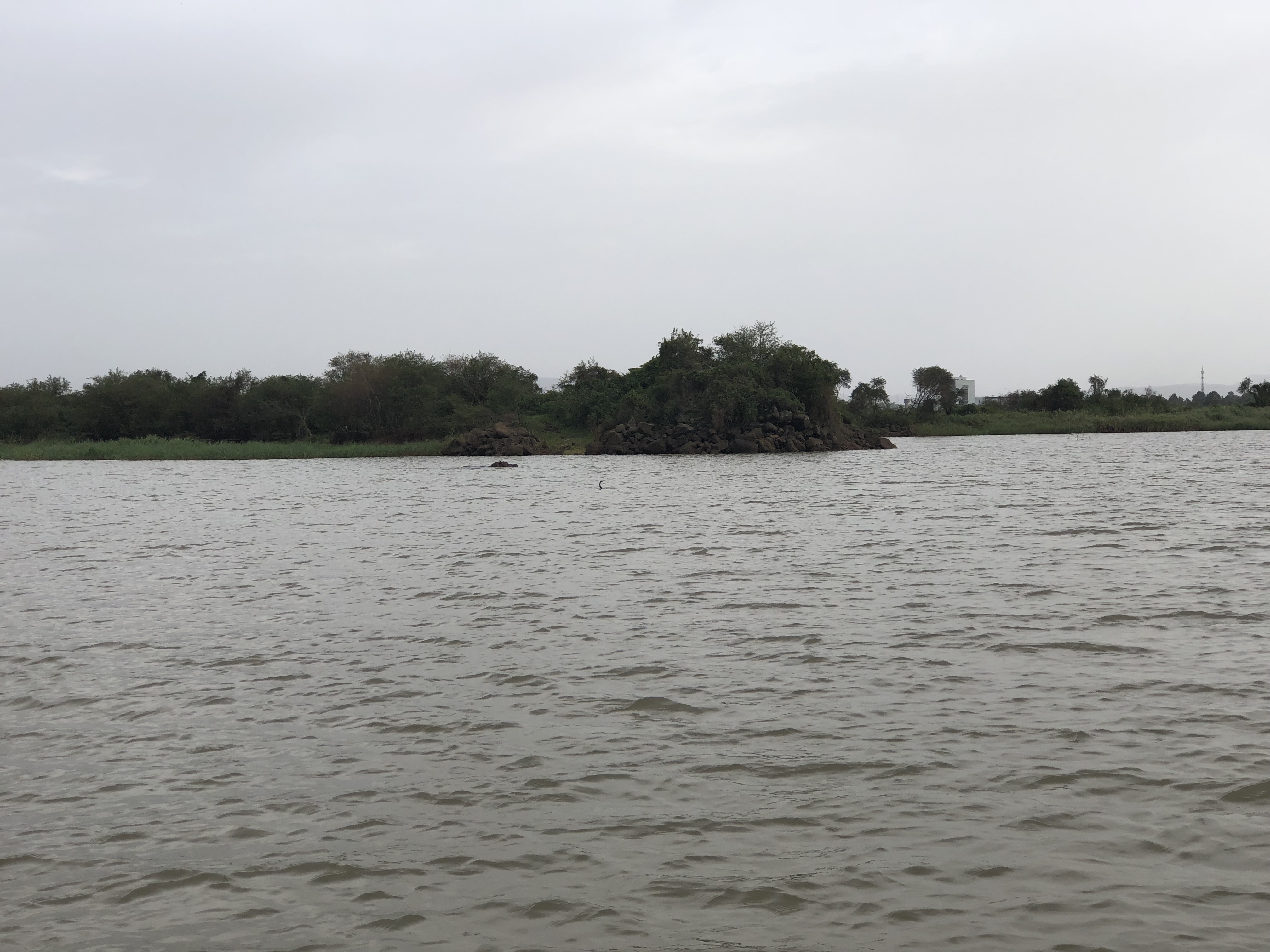 Here we have to say my picture/ video taking skills are lacking – or else hippos are extremely elusive. This photo represents my actual experience sighting one: far off for a fraction of a second

Bahir Dar is a resort city with a resort atmosphere. That night we stayed at a charming lodge 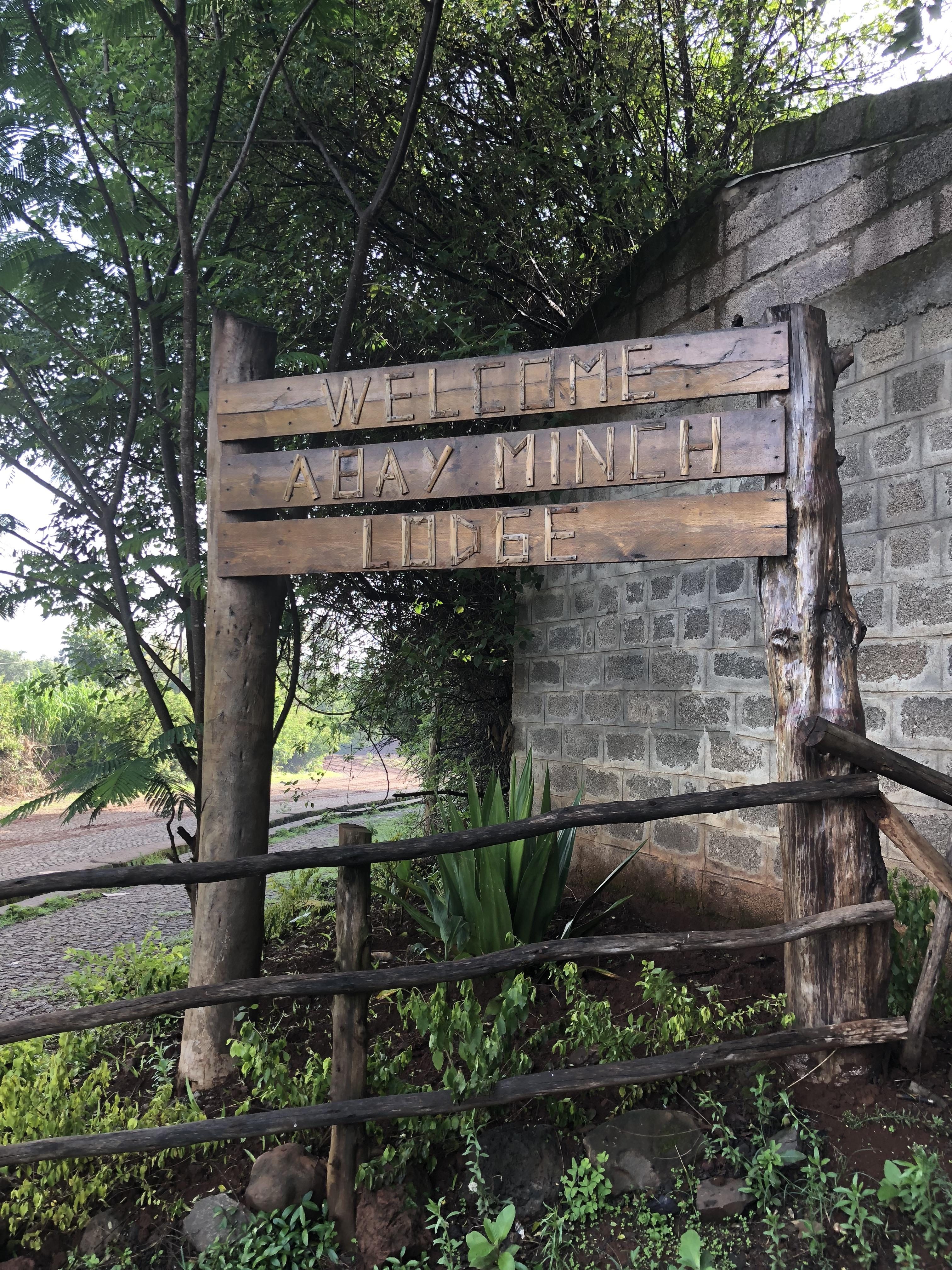 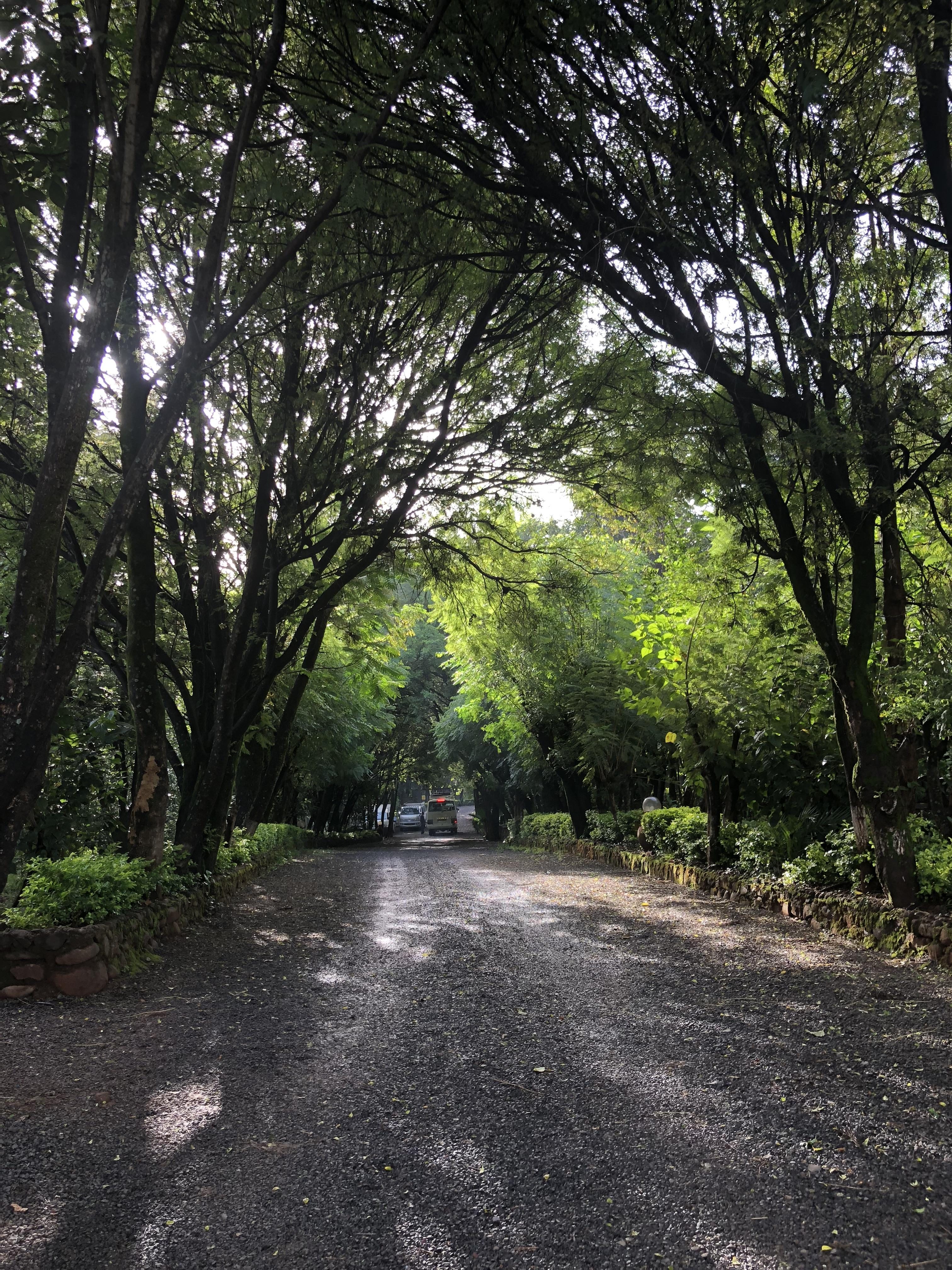 Rustic and well manicured charm is the order of the day 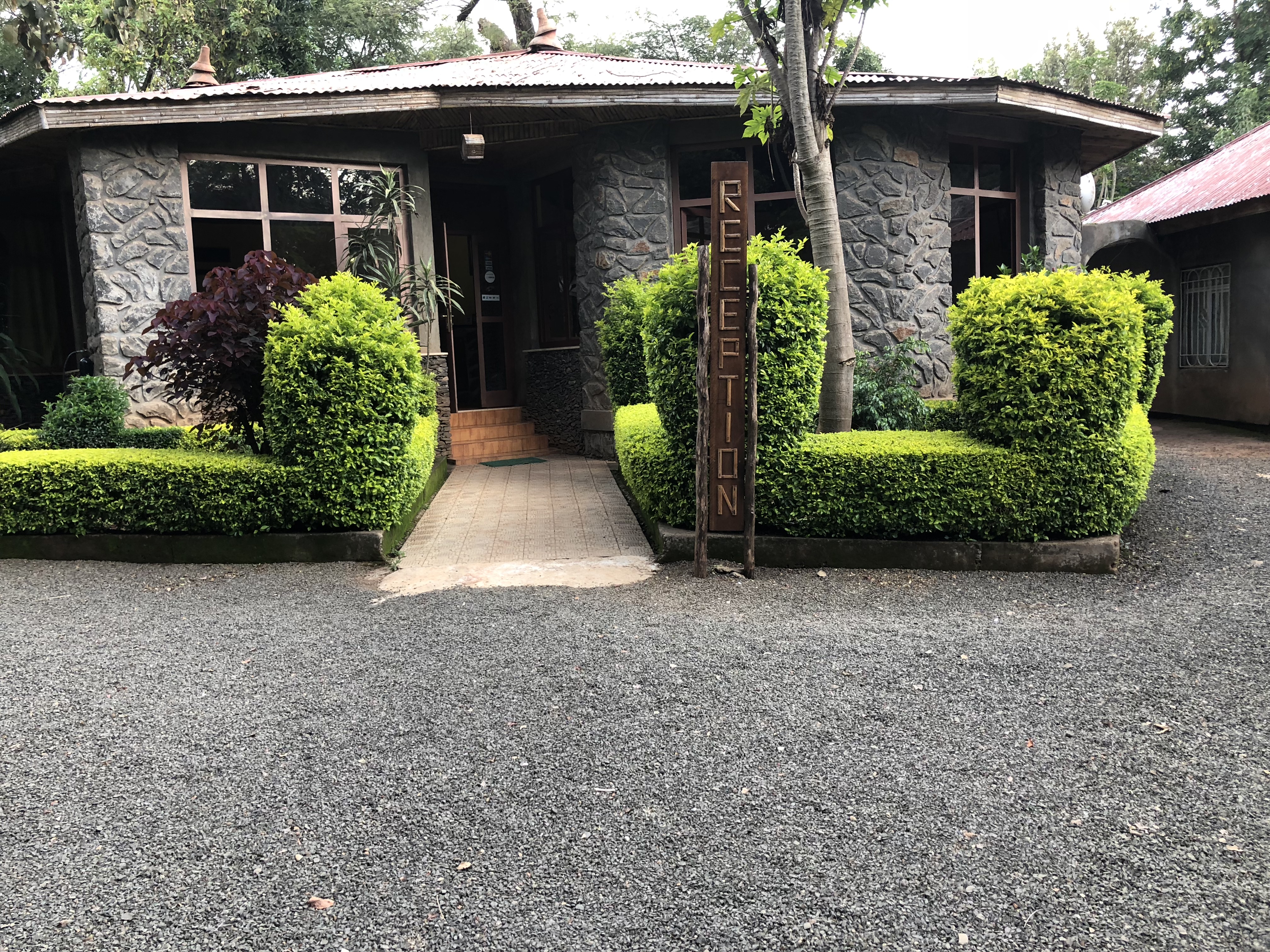 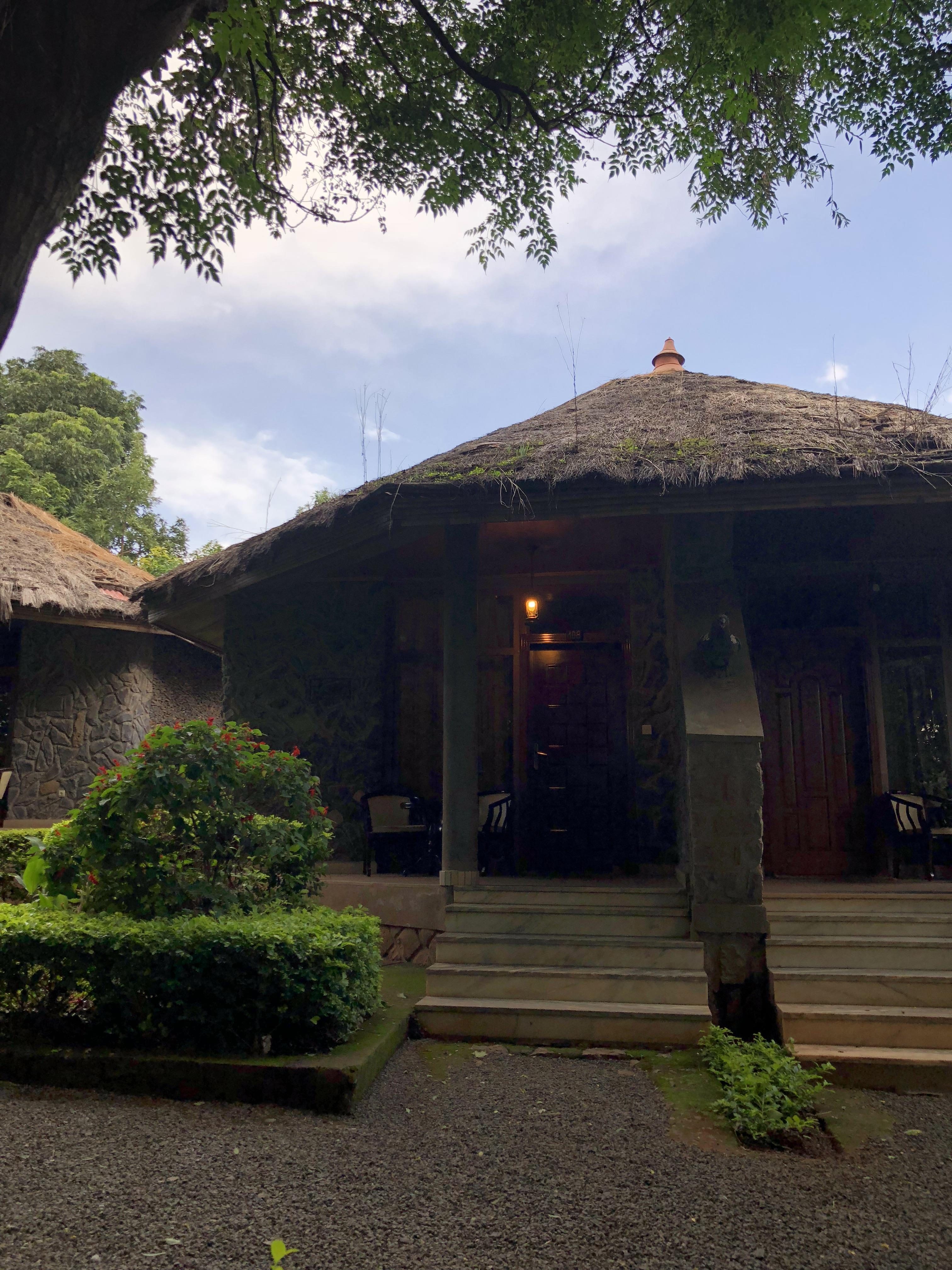 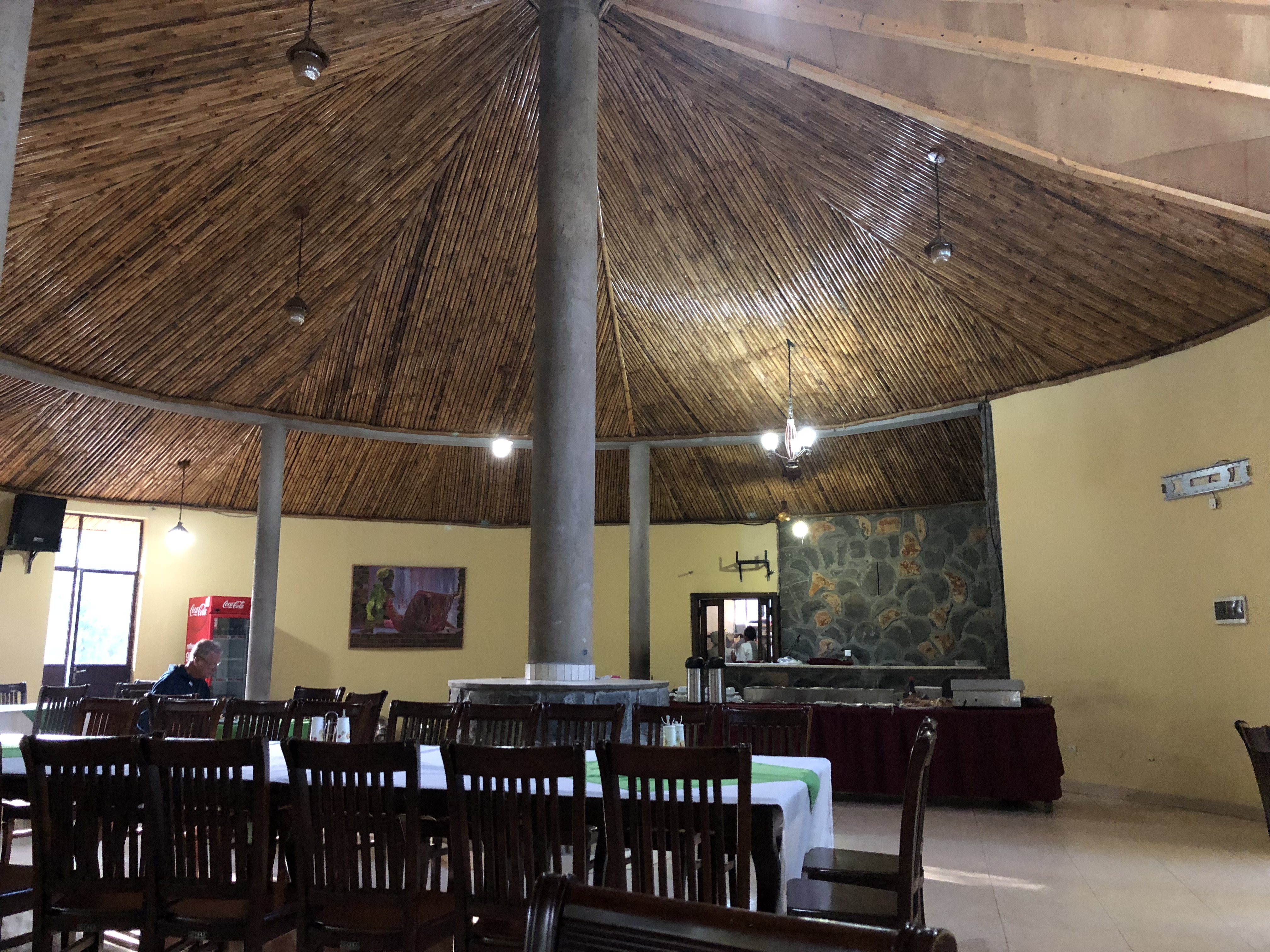 And a good night’s sleep 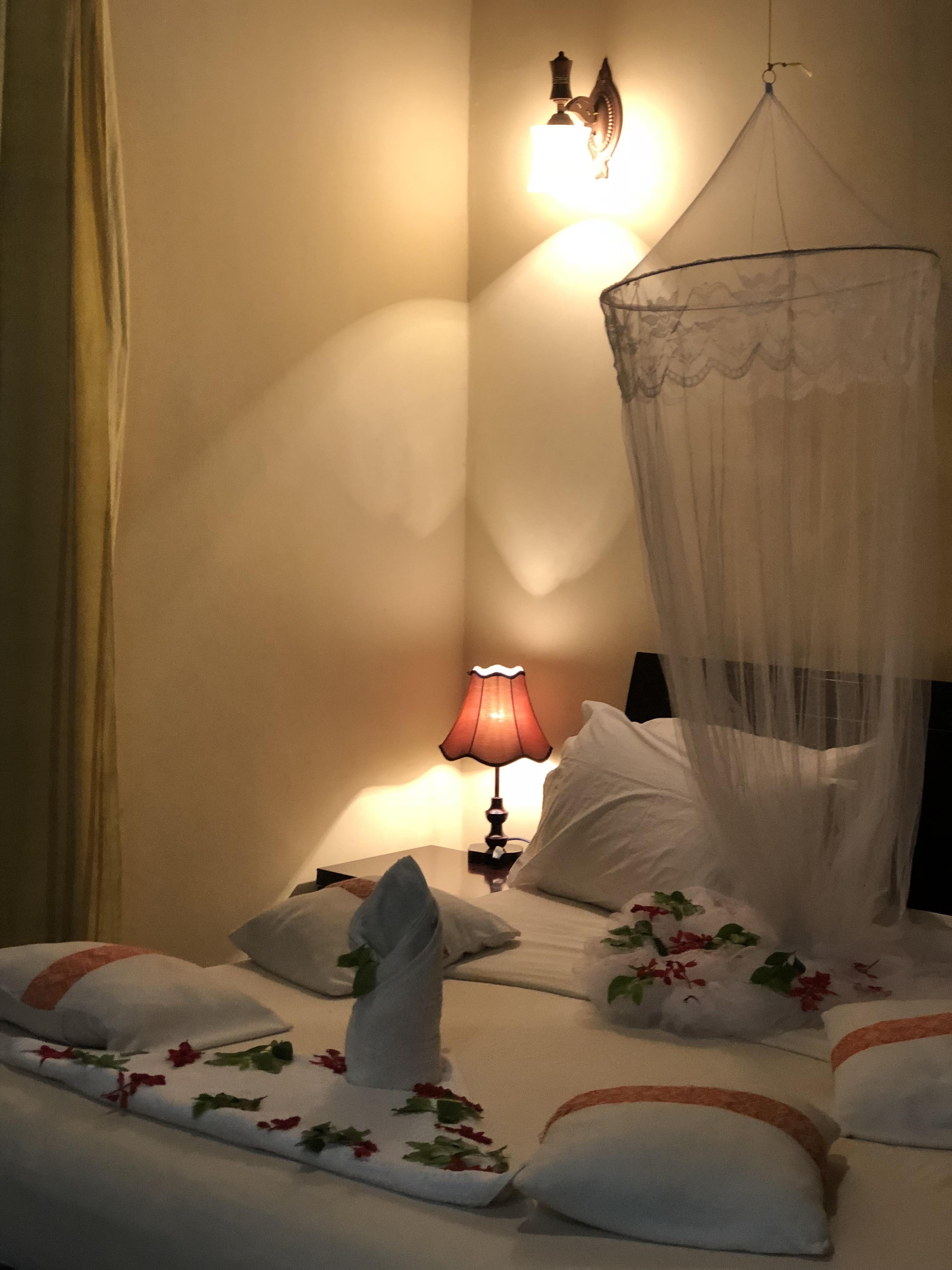