When Phillip, my friend and wonderful co-author for Languages in the World, was in Spain this past month, he suggested we meet up in Serbia. I said “Sure,” especially since Belgrade is an easy hour+ plane ride from Bucharest. We met up last week.

It was no surprise that the landscape I looked down on during my flight was continuous between Romania and Serbia, namely rich, flat farmland, neatly cultivated. 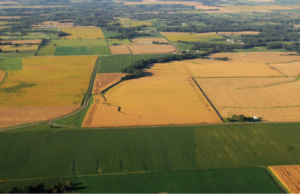 Nor was it a surprise that Belgrade initially reminded me of Bucharest in terms of look and feel. The two cities are relatively close geographically, a significant part of their modern development occurred during communism, and both people are Eastern Orthodox, so their churches are similar. 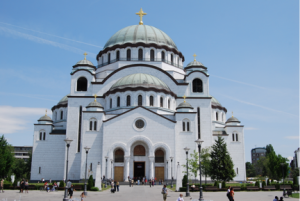 However, the similarities quickly wore off, and I began to focus on the differences.

Bucharest is flat and built around a series of lakes. Belgrade sits on a hill at the confluence of the Danube and the Sava Rivers. 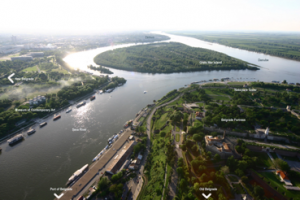 Belgrade Fortress dominates the right foreground and wraps around the land at the confluence. It’s now an extensive park. Notice Zemun in the top center. This town was once the border between the Ottoman and Austro-Hungarian Empires.

There’s something particularly picturesque about a European city built on a mighty waterway. Here’s a postcard-worthy image of Belgrade. 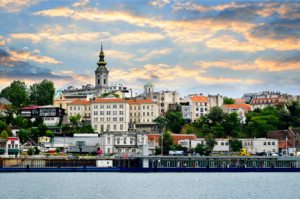 This waterway has attracted investors from Abu Dhabi and a proposed 3.5 billion-euro Belgrade Waterfront development. At the moment it’s a billboard. 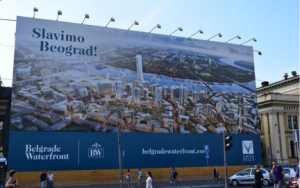 A W hotel has also been announced.

As far as I know, no such influx of petrodollars has come to Bucharest, for better or worse.

Both cities have extensive pedestrian zones in the old town, bursting with bars and restaurants.

Belgrade has Skadarlija, sometimes referred to as the Bohemian district, with a charming and cobblestoned main street. 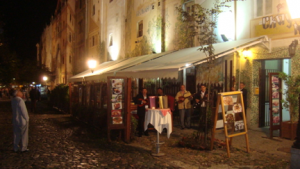 Here we drank Serbian rakija. I chose the kind made from plums, also known as şlivoviț, from șljiva ‘plum’ (Romanian palincă). 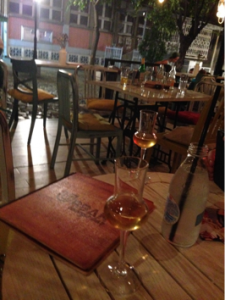 Suffice it to say that Bucharest was never bombed by NATO forces. Belgrade was, and you can still see some of the ruins.

Here’s a much less picturesque view of the city: 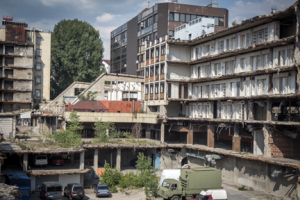 When we were in Belgrade, there was a block-long installation set up in front of the capitol building. 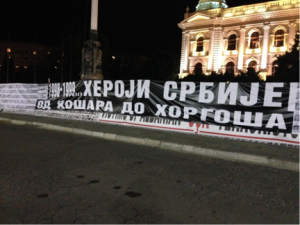 The banner reads: 1998-1999… Serbian Heroes from Hişar to Horgoş. (Hişar is the southernmost location in Serbia, Horgoş the northernmost.) We were told that the banner was up because there was likely to be some kind of demonstration the next day.

Here’s a close-up of some of the fallen heroes: 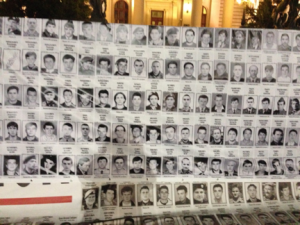 So, the wars aren’t yet completely over. 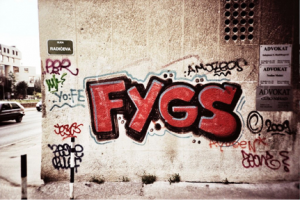 When I arrived at the hotel, the person at the reception desk asked me about my first impression of Belgrade. I replied it seemed to me a lot like Bucharest. He paused to consider my response then said, “But Belgrade is more fun.”

I don’t know, but Belgrade does seem to have fantastic nightlife, although we didn’t do any of it. We did go to Beton Hala one night, a former dock transformed into trendy restaurants, all packed on a Thursday night. 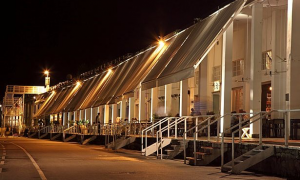 Beton Hala – Cement Hall on the Sava River, aka Savamala

We chose Ambar for its Serbian specialties. The manager told us an Ambar has recently opened in Washington, D.C.

A splav is a boat bar/restaurant. On both sides of the Sava there are splavs, one after the other. We were told the ones on the Zemun side were better. 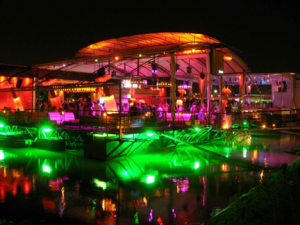 We had a more sedate lunch in Zemun, not on a splav but at a waterside fish restaurant: 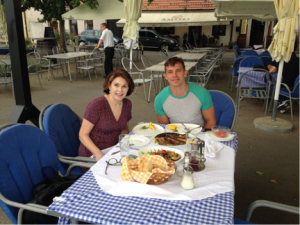 The People of Belgrade

The stereotypical Serb in a movie is a tough guy. The Serbs on the street, so to speak, are anything but. They’re warm and welcoming. (Just like they are in Romania.)

Through a friend of a friend, Phillip met Nemanja (a typical Serbian male name, as it turns out), and he took us on a 2½-hour walking tour one night and another 2-hour driving tour the next. Amazing!

Everyone we met was kind and happy to help, if we needed it. 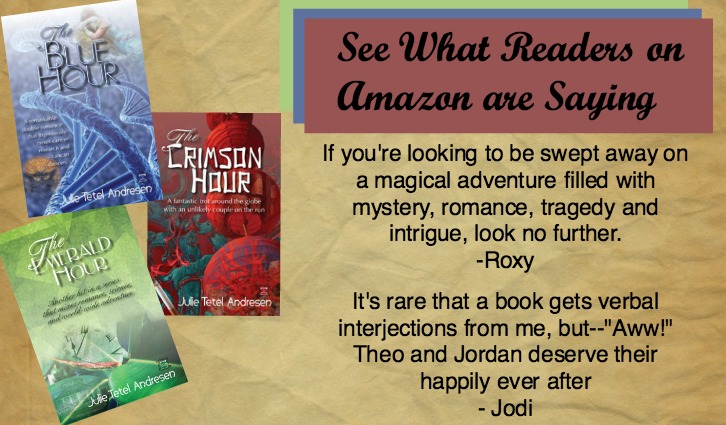 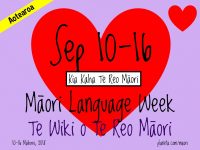