Here’s my story. When my younger son, Gerard, left the US in 2012 to live in Japan, I inherited his car. I haven’t owned a car since 2005. (No holier-than-thou point to make here. I don’t want to think about my carbon imprint given all the flying I do.) I just don’t need a car, since I always live within walking distance of what I need and do. And for whatever is outside of walking distance there’s always Lyft.

But, okay, I thought Gerard’s car might be somewhat useful. It turned out it wasn’t – don’t get me started on upkeep, taxes, insurance, etc. for something I hardly used – and through a long (boring) story the car ended up with a dead battery in the front yard of the house of my friend, Gail, in Orlando. Time to get rid of it.

Doing some asking around it turned out a good option was to donate the car to Central Care Mission (CCM) in Orlando. I did so on January 30, 2016 and then duly took my tax-write off on last year’s taxes. Good.

In February I was invited to a breakfast event to give the Orlando community an update on the work of CCM. Eight hundred people attended. I was flat-out amazed – and not just by the size of the crowd.

Thirty-six percent may seem disappointing, but it’s 3 times the national average, and this percentage only shows how dreadfully difficult it is to cure addiction. But if anyone can do it, it’s CCM.

They provide a yearlong addiction recovery program where the men literally rewire their brains through diet, exercise, spirituality, and plenty of reading. Yes! They also receive job training and help with those practical horrible things required in regular life, like getting up-to-date with the IRS (if you’re an addict, you may not have been filing tax returns!) and obtaining a valid ID, like a driver’s license. The simple (but then not so simple) lack of a valid ID can cause a recovering addict to hit an administrative wall preventing his life from getting on track … and then to spiral back into addiction.

At the end of the breakfast, recent graduates from the program came to the various tables and offered to answer any questions. The man who came to my table described his descent into addiction, the pain it had caused his family, his chance to get his life back through CCM, and the prospects he now had for this new life. He admitted to being scared.

It turns out, he had also been given a recently donated car, and this car was going to allow him to get started on his business of restoring wooden musical instruments, which was his craft before he got addicted. It was clear that his ability to work was a great source of pride and happiness for him.

I got it. When I first donated the car, it was all about me, me, me. I got rid of a burden. I got my tax write off.

As a result of the breakfast I saw that I had participated in something much larger than myself: I had contributed to a man turning his life around. I left the breakfast with a sense of joy.

The breakfast was on a Thursday. Two days later, on Saturday, I went to yoga at my downtown Y, as usual. For some reason, I was there early. A few minutes later a woman came and sat down next to me, and we struck up a conversation. She said she hadn’t been to yoga in forever but figured she just had to come today. Within one minute she was telling of the horrible week she had had dealing with her son’s alcoholism.

To which I said, “You are talking to the exact right person.”

I told her all about Central Care Mission. We were both kind of amazed and figured the universe had brought us together for a reason. It was a real thrill to be able to tell someone in need about a fabulous program that actually works.

If you know someone struggling with drug or alcohol and in need of addiction recovery, there is real hope. 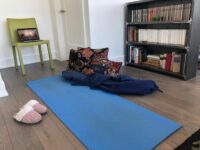