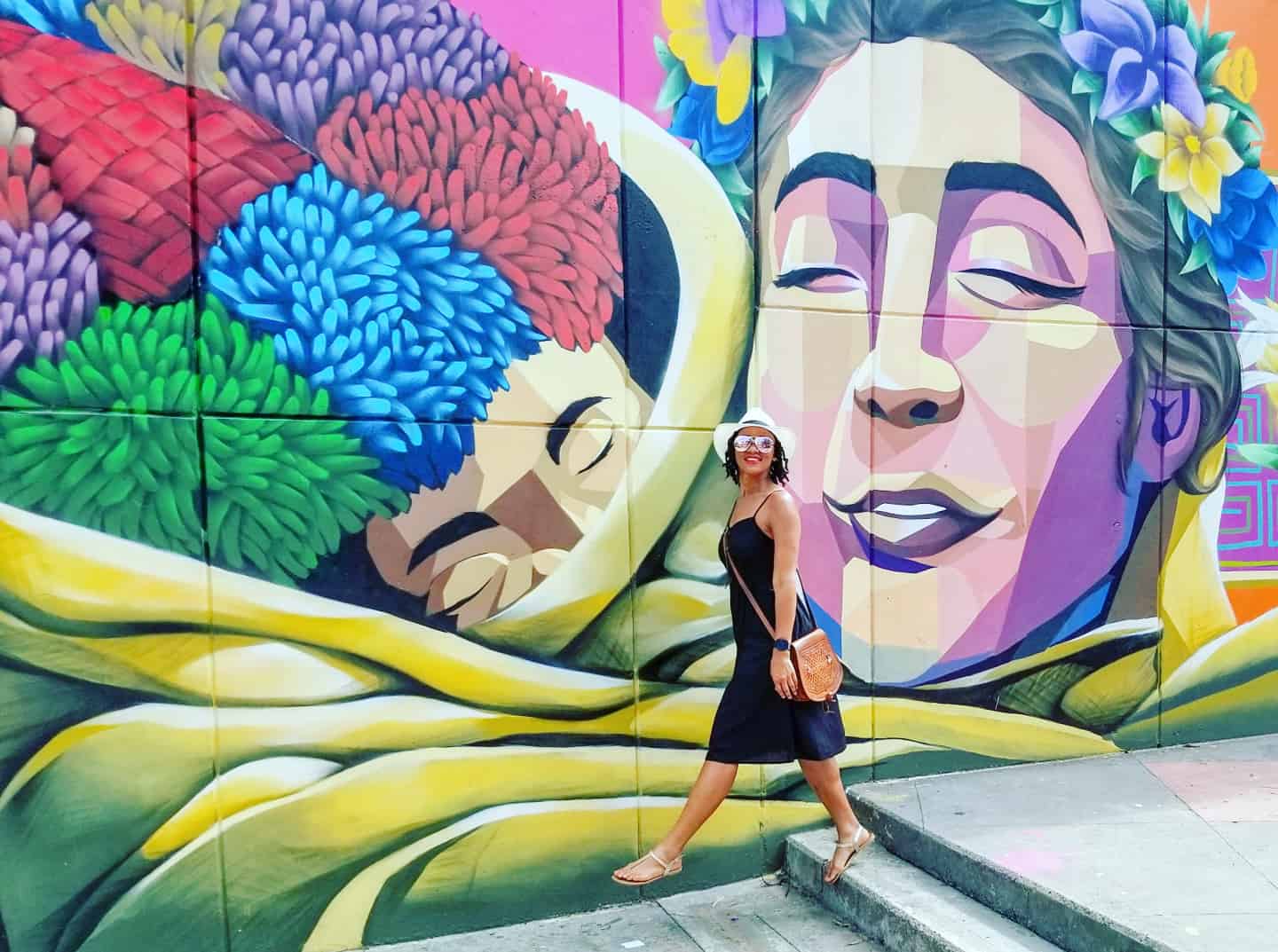 Eva Michelle Wheeler is our guest blogger this week. She will take us on  a delightful linguistic journey through Colombia.

I chose Colombia as a travel destination. The vibrant culture and natural beauty drew me. Along with the food, the history, the music, the people, the colors, and the climate.

I know some people have reservations about visiting Colombia. They want to know whether it is safe and whether they can move about freely. As I moved through the country – foreign, female and solo – I felt welcome and comfortable. Each day taught me new lessons about Colombia, about myself and about the people I met along the way.

Colombia: English and Spanish at the Mud Volcano and the Pink Sea

I arrived in Cartagena and immediately booked a tour. Our first guide was bilingual. She deftly navigated between Spanish and English for the two groups of speakers. She took us to the Totumo Mud Volcano in Santa Catalina. Everything went perfectly there. It is an experience I highly recommend. 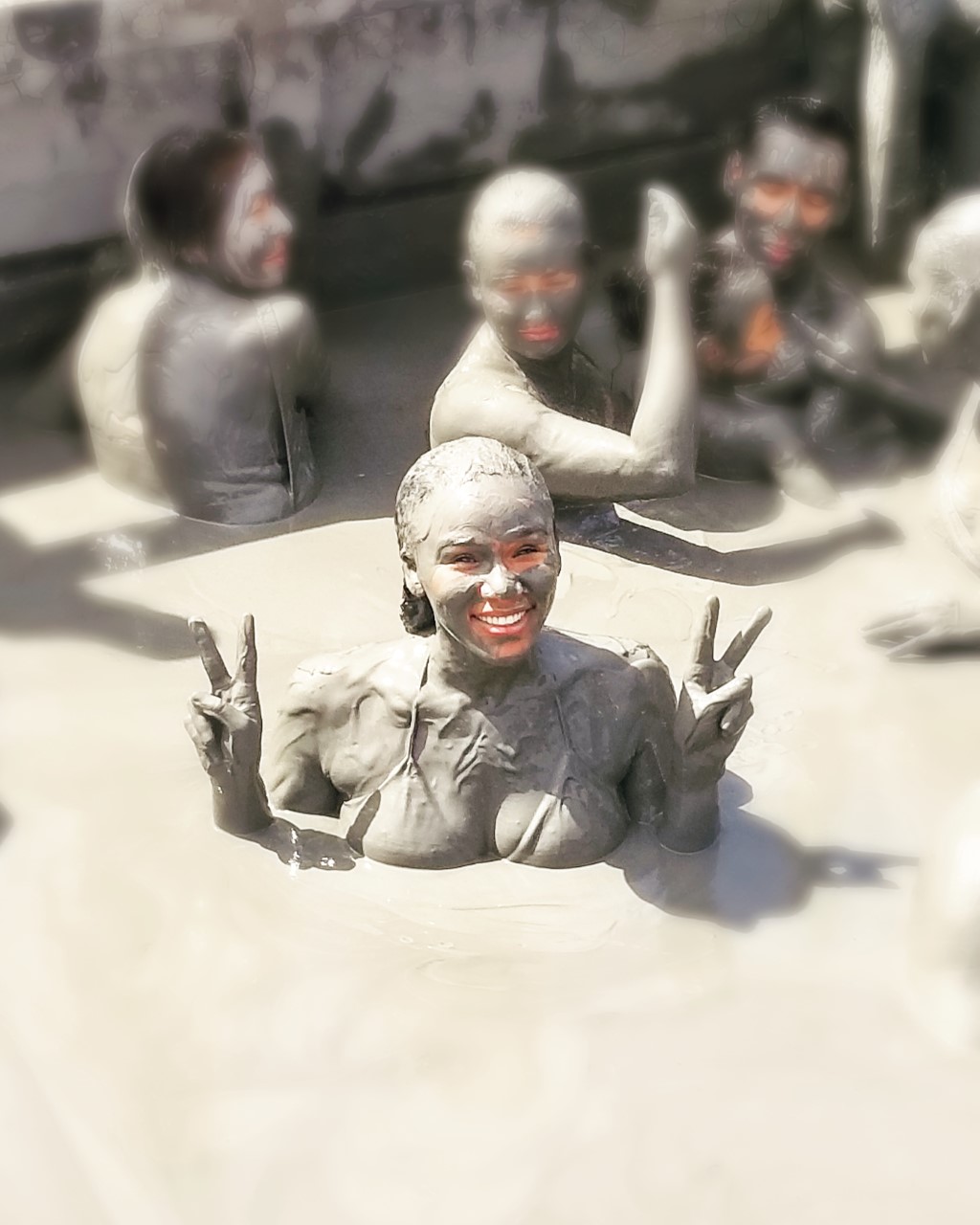 Next we went to the Pink Sea in Galerazamba. Before booking the tour, I had been told that the Pink Sea wouldn’t be at its maximum splendor during this time of year. Still, I wanted to see it. 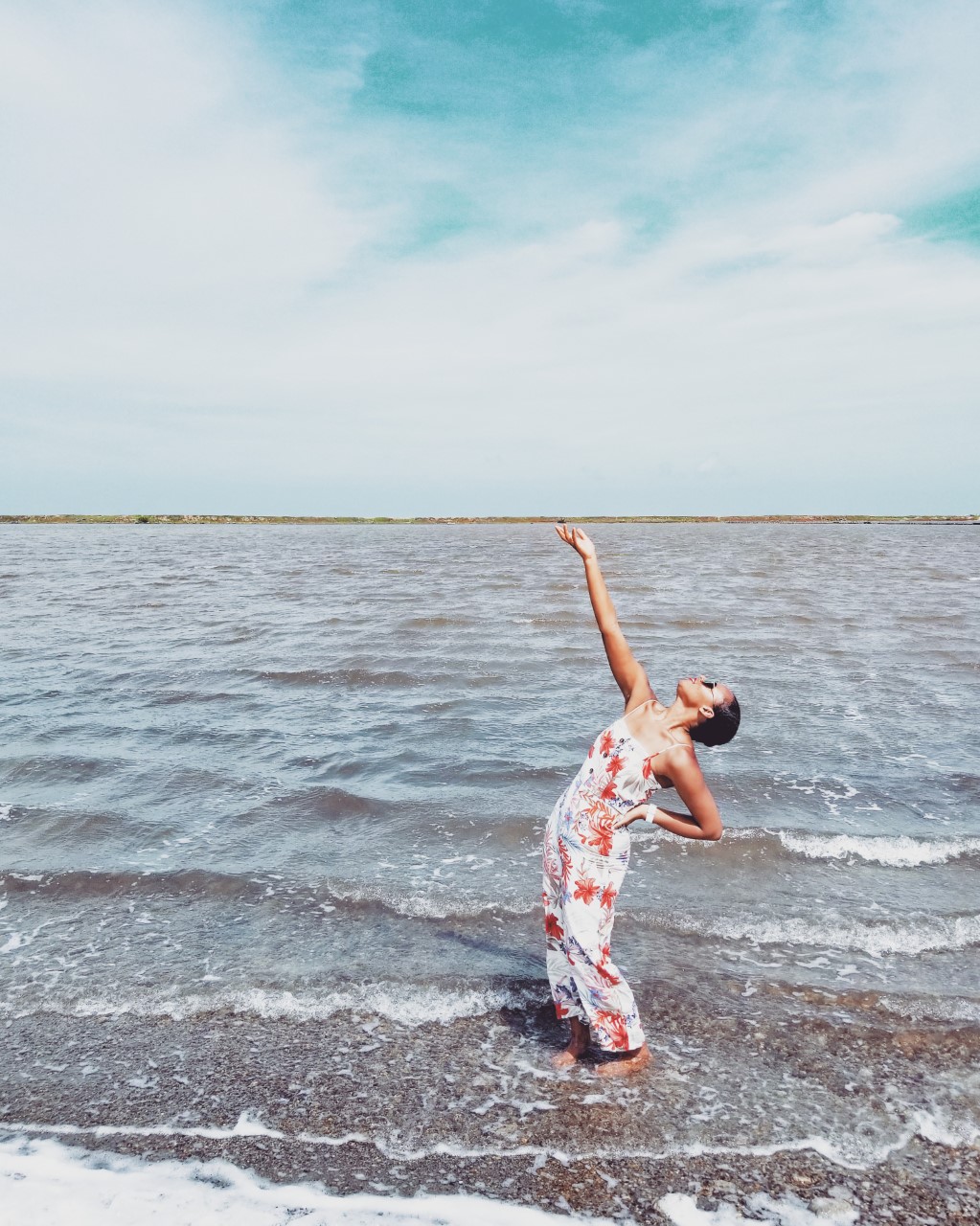 Our guide at the Pink Sea spoke only Spanish. So he asked me to translate for the English speakers. I was happy to do so. I explained to my group that what we call the “Pink Sea” is a series of salt pans that receive water from the ocean. Each pan has a different level of salinity, and specific microorganisms give the water its pink color.

In the end, my fellow English speakers thanked me. And I thought about the wonderful power that language has to connect people. I also chuckled to realize I had become a tour guide on my second day in Colombia.

San Andrés is part of a Colombian island chain. It is located in the Caribbean Sea just off the coast of Nicaragua. While in San Andrés, I stayed in an Airbnb near the city center. My fellow guests were a Brazilian couple. They had come to town for a beach wedding and honeymoon rolled into one. Naturally, they spoke Portuguese.

I speak a variety of Portuguese more aptly described as “Portuñol” (a mixture of Portuguese and Spanish). I dusted it off to make conversation with my new housemates. They had a number of different activities scheduled. When I told them I had no plans, they insisted I join their tour. And I’m glad I followed their advice! The next morning I went scuba diving with them. In the afternoon we went parasailing.

Thus I found a beautiful new world I had never before experienced. And I had not anticipated that speaking Portuguese would introduce me to one of the best experiences I had in Colombia. I thought again about how language brings people together and enriches the journey. 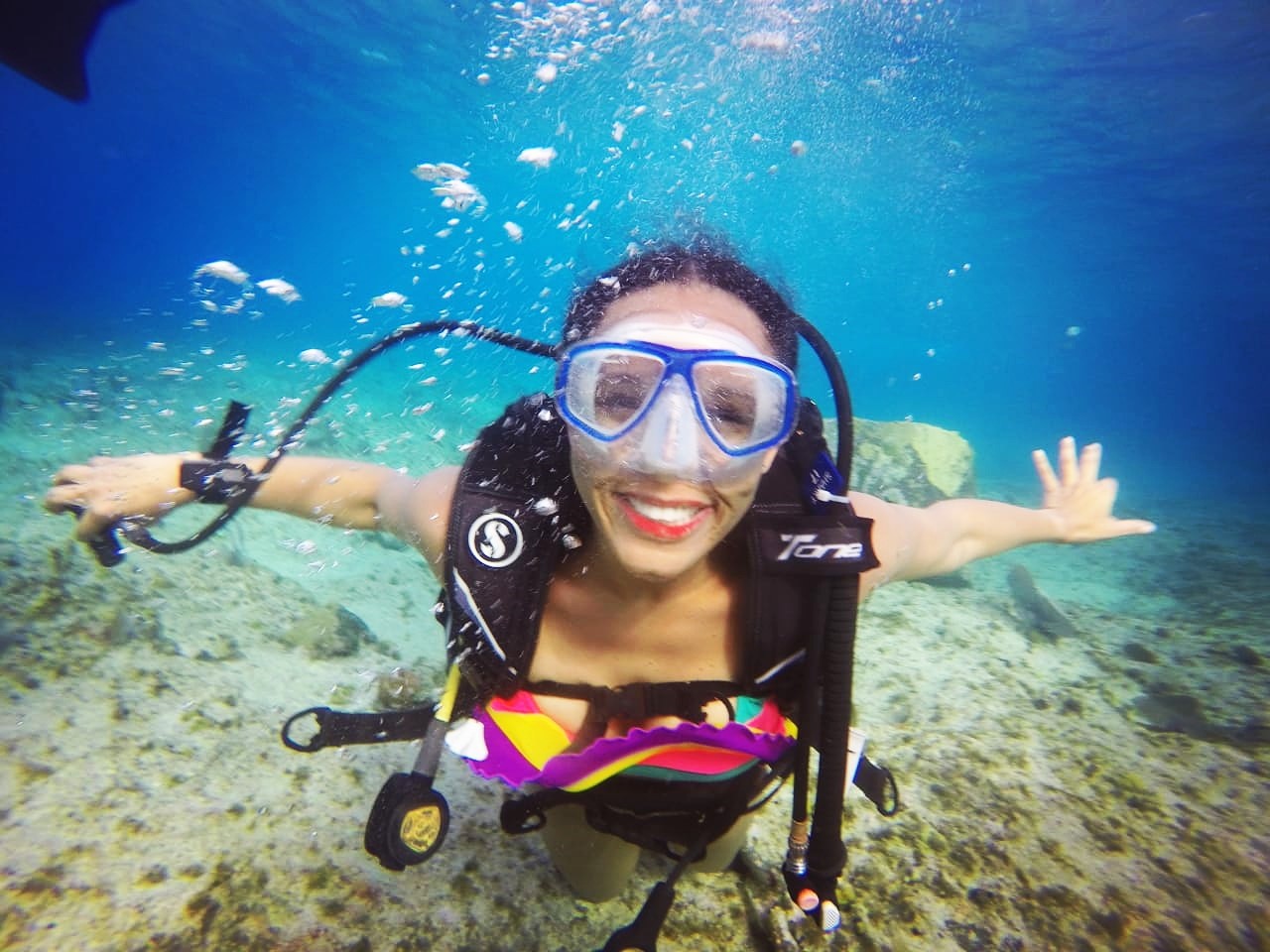 In the 1980s, Medellín was considered the “Most Dangerous City in the World.”

The danger was due in no small part to the violence surrounding Pablo Escobar’s Medellín Cartel. Even after Escobar, parts of the city, such as Comuna 13, remained incredibly dangerous due to gang violence and paramilitary activity. When I visited Comuna 13 with my tour guide, Yeison, I learned about art, investment and transformation. And about how a community’s past does not have to dictate its future.

Yeison and I spoke in English, and he took great care to explain everything I needed to know. Comuna 13, built into the mountains at the edge of the city, is a powerful example of rebirth and transformation. “Invisible borders” – and visible mercenaries – once made this community the kind of place where no one could be free. During its darkest time, Comuna 13 was a place where hundreds of people were killed or “disappeared.”

Today, Comuna 13 moves forward through innovation, investment and the arts. It is a community that keeps its history at the forefront. Not to glorify it but as a reminder to never return to it.

In Cali, I booked a city tour. When I made the reservation, I indicated that I could take the tour in English or Spanish. The day of the trip, we were a small group, just me and a fellow traveler from Mexico.  When we met, I exclaimed, “¡Vecino!” ‘Neighbor!’ He chuckled and shook my hand. Our guide, Natalia, explained that it made more sense for the two of us to do a combined tour in Spanish. So together we learned about the history of Cali. 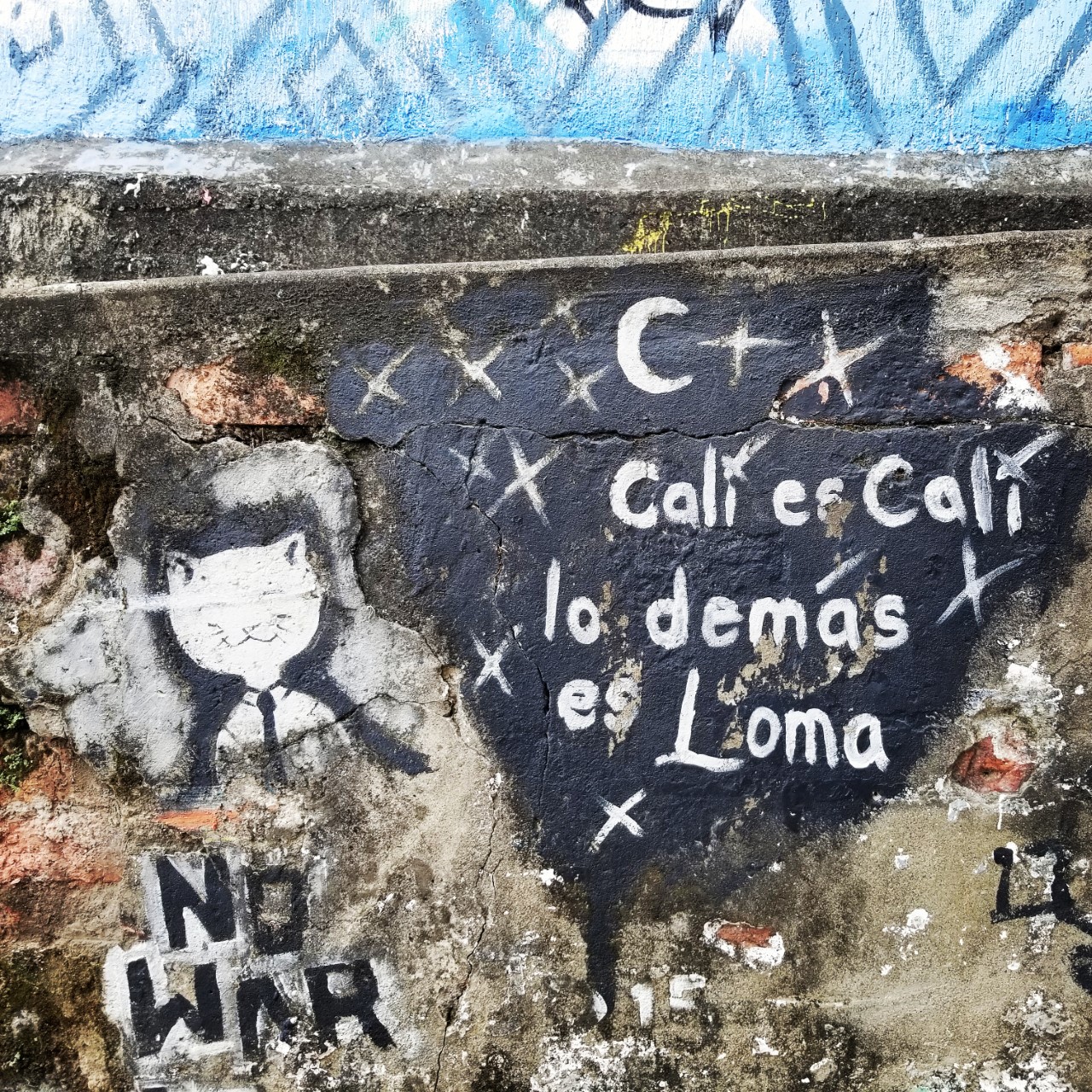 We took pictures from the Cristo Rey ‘Christ the King’ monument and strolled through the Parque del Gato ‘Cat Park.’ We tried luladas (a sweet citrus beverage) and learned about the history of salsa music. Later, as we walked along the Bulevar del Río ‘River Boulevard’, Natalia told us about the transformation happening in Cali. Like Medellín, Cali was once home to an infamous drug cartel, the Cali Cartel. They made parts of the city violent and unsafe. Natalia also spoke about how the city was investing in art and innovation, and in creating spaces where people could enjoy themselves and feel safe. 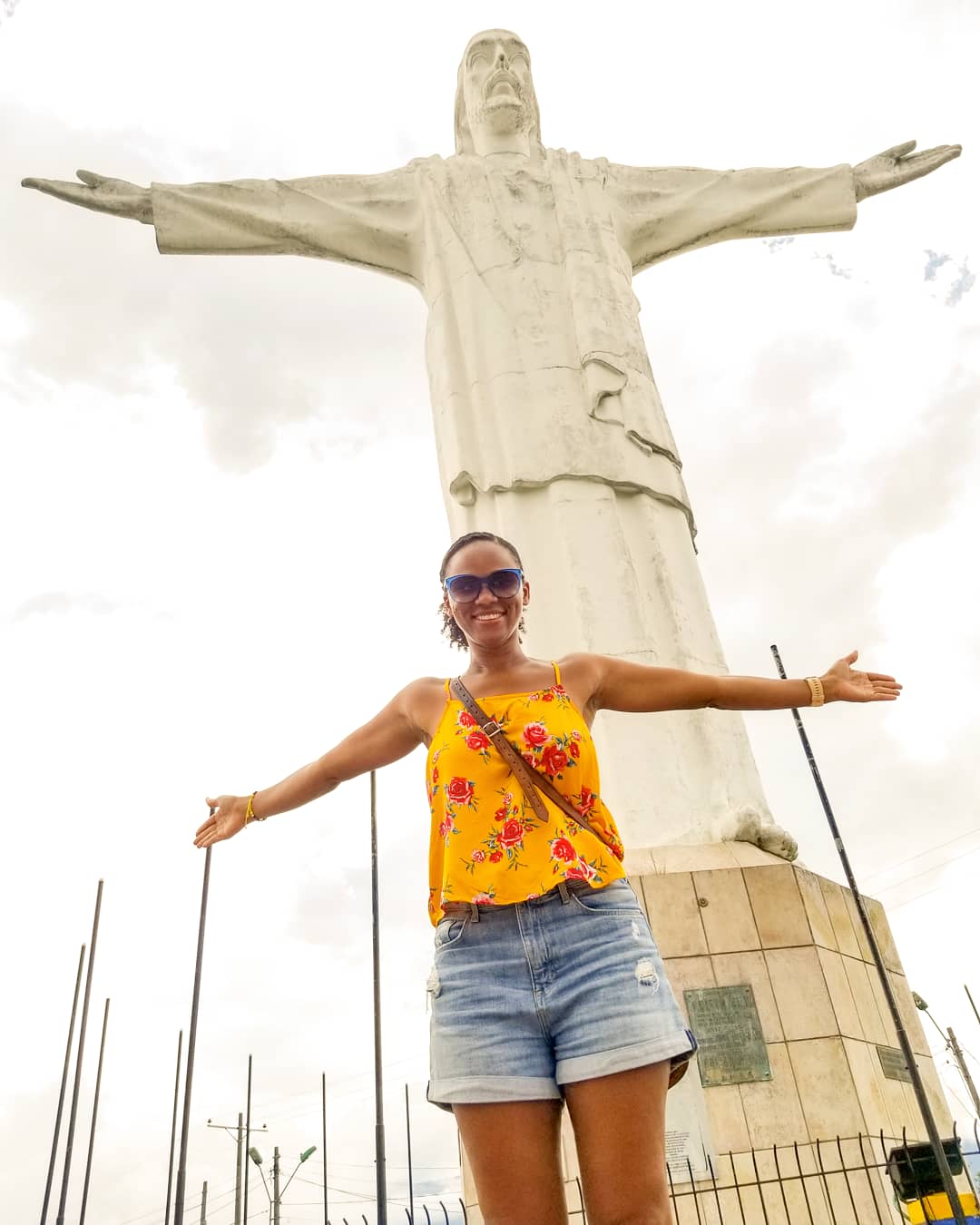 My visit to Colombia was everything I hoped. And it was so much more than I could have ever imagined. I am deeply grateful to the people I met along the way. They helped me to see the best that each city had to offer. And I am grateful for the gift of language. It has the power to connect and enrich us in the most wonderful ways.