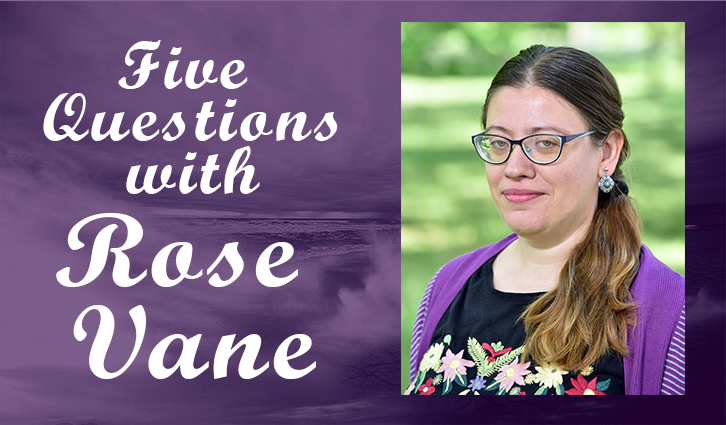 I’m having so much fun connecting with all the smart authors and bloggers I’ve met online. This is the latest entry in my series of conversations with other romance authors, who join us to share about their creative process, their habits, their inspiration, and more. Our guest today is a dear friend of mine from Romania, Ruxandra Visan who is publishing her first romance book this Winter under the pen name Rose Vane.

1. What first drew you to romance?

I’ve been reading romance ever since I was a preteen. And I later fell in love with medieval literature – and medieval romances – which are, after all, one of the sources for our romance novels…So it sort of naturally grew from there. I guess I’ve always been drawn to a world that doesn’t disappoint – a better world. Romance has always been this better world for me.

2. You are from Romania and write in both Romanian and English, however, you only write romance in English. Why is that?

I don’t think I’ll ever be able to write romance in Romanian. Poetry, experimental prose, fantasy – definitely. But not romance. Maybe because when I read my first romance novels (Mills & Boon books or Regency novels by Georgette Heyer), in my country, these were available only in English. Maybe because, at least in my opinion, Romanian still hasn’t developed a register appropriate for romance – it’s either too literary or too slangy when you want to write love scenes. And because of this, it’s actually very hard to find a middle ground when you translate romance from Romanian into English…(I’ve tried my hand at it. Difficult.) And maybe because romance is my ultimate escape from reality – so why not create a different (but not-so-different) self in a different language?

3. You decided to publish your books under the pen name Rose Vane. Why did you make that choice?

My real name, which is very Romanian, might sound foreign and hard to memorize for English-speaking readers. I’ve chosen Rose Vane because it has my initials. And also because it’s short and easy to remember. I first thought about names and roses – A rose by any other name would smell as sweet… So –  Rose. And I also liked the association between roses fading and the vane–vain thing…Besides, I’ve already published academically under my real name. And I thought a pen name would make it simpler to separate my academic writing from my fiction.

4. You just had your first fiction book, a paranormal historical romance set in the 1880s picked up by Carina Press (congrats!). What was the process of pitching the book like?

It was actually easier than I thought. I happened to see a call for submissions for a Carina Press anthology. At the time my book was shorter. And I thought my story had at least some of the elements they wanted. So I decided to submit – actually it was my first romance submission ever. Of course, I didn’t have high hopes – it was the first time and besides I didn’t feel confident that they might be interested in a nineteenth-century Romanian setting. But they were. I got lucky enough to find an editor who really read my book, liked the Gothic atmosphere I’d tried to create and gave me insightful comments. I got a Revise and Resubmit letter. So I revised the story and I made it longer. And then I resubmitted. And they liked what I’d done with it. So now I’ve got a contract with Carina Press and I’m pretty excited about it. Plus, I get to work with the insightful editor who first read my book.

5. In addition to your upcoming book, you have written multiple other romance manuscripts and even write poetry in Romanian. How do you stay focused and do you have a writing routine?

To be honest, I’m a very chaotic writer. I write when I feel like it. I have no discipline or schedule. I just write (multiple things which I don’t usually submit) when I have time to spare.  And I just immerse myself into the characters or the worlds I’m writing at the moment. I can stay very focused on a historical paranormal romance in English for weeks. And when I feel my focus is faltering I switch, for example, to writing in Romanian or to a Regency romance I’d started earlier. And I immerse myself in that. And then, after a while, I switch back. Although, I have a feeling I’ll have to change my habits now that I’ve got a contract for this book. So I’ll probably have to become a more disciplined writer…Although that may be wishful thinking…

Special thanks to Ruxandra Visan for participating in this series! Her first book will be released under her pen name Rose Vane in December 2017.  Follow her on Twitter (@rosevanevane) or like her on Facebook to get up to date announcements about her upcoming book.