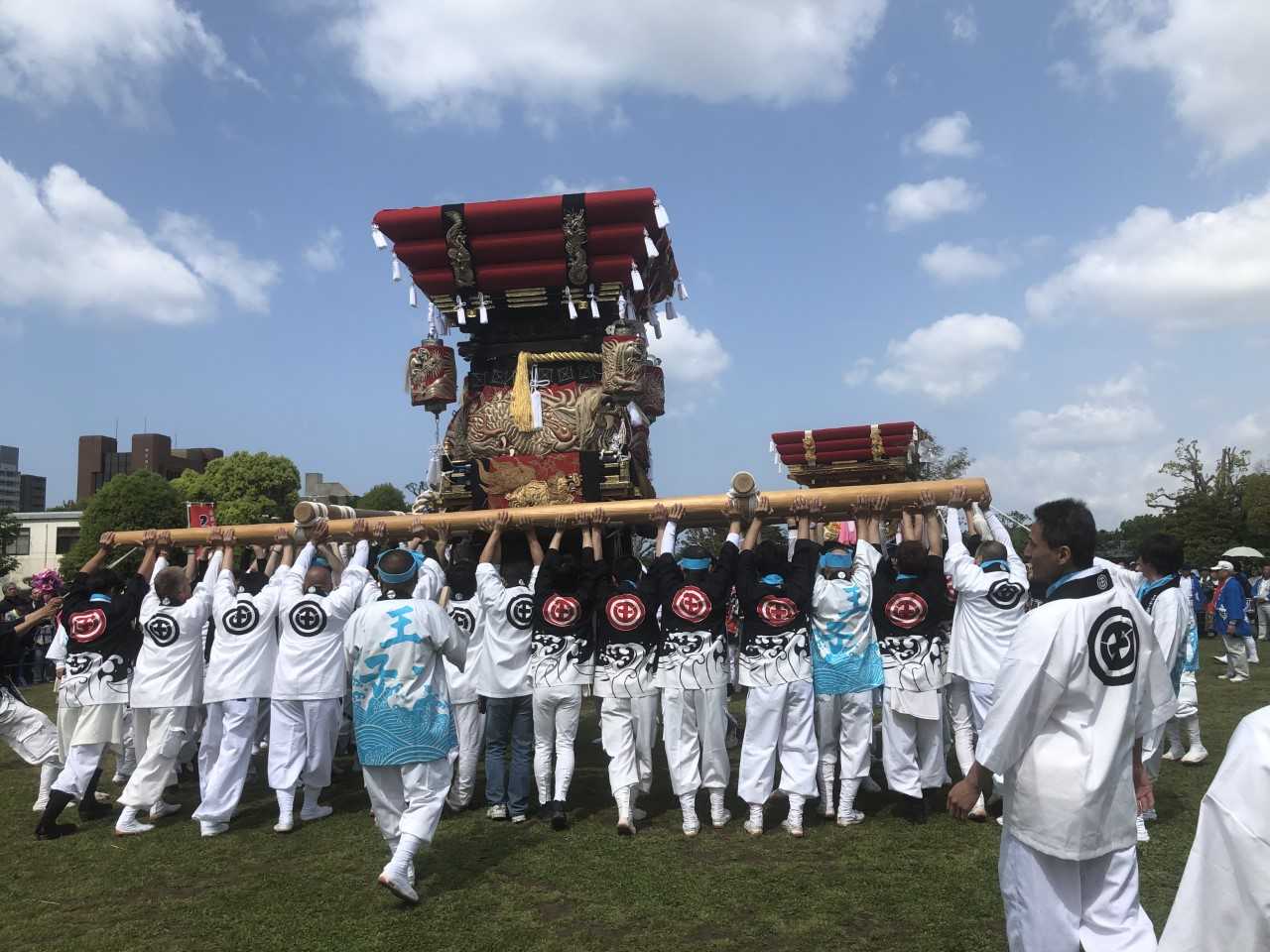 Futon daiko is the word in Japanese for the kind of portable shrine pictured in the title image. Last week there was a futon daiko festival in Akashi, a town a good hour or more west of Osaka. My son, Gerard, is somewhere in the title image, but I can’t tell you where.

futon = bed; taiko = a kind of drum (phonetic note: when taiko is combined with another word, it becomes daiko) 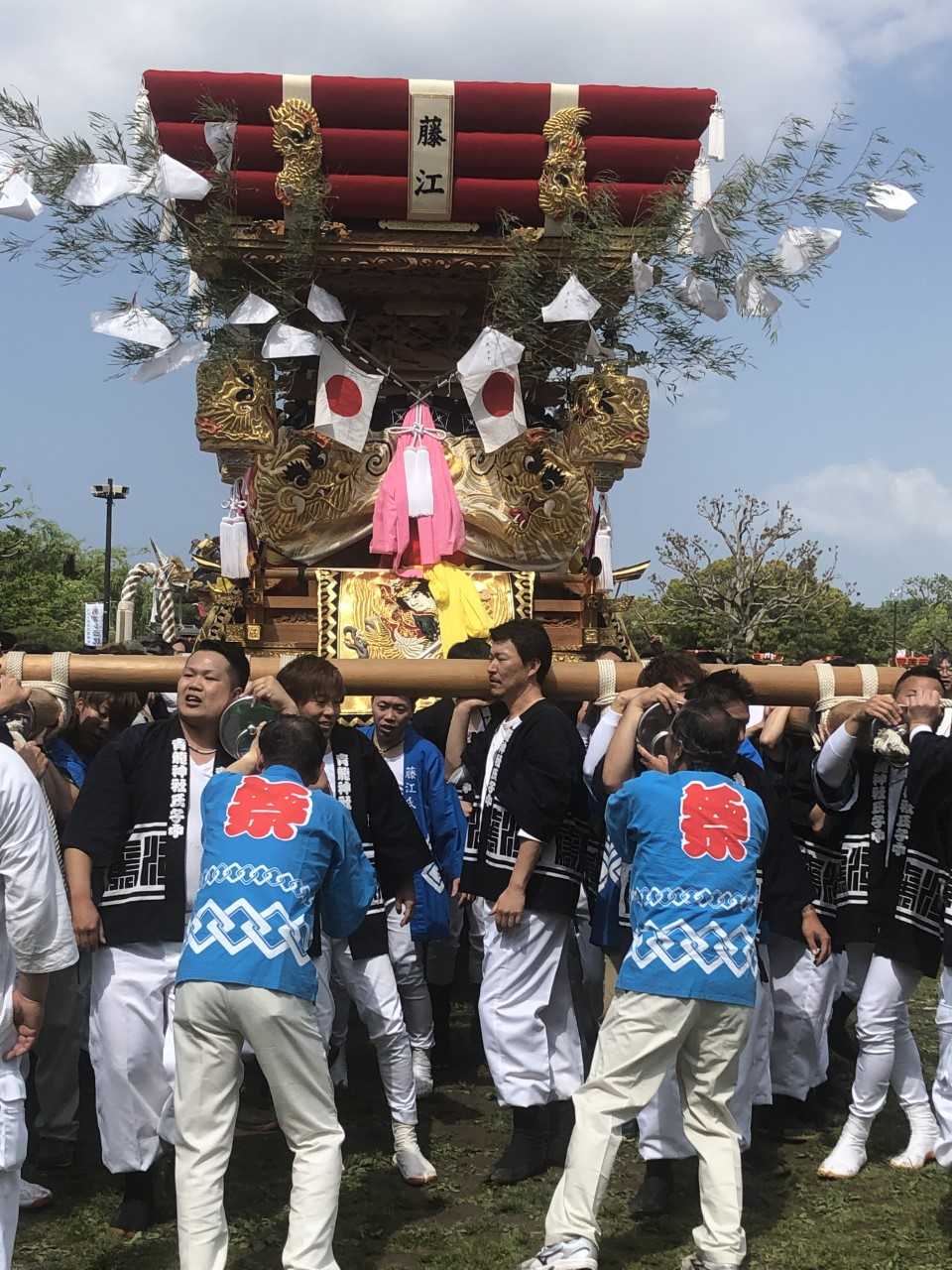 So, just how did that first shrine committee meeting go, way, way, way back when?

A: “We have a god that we need to take out for a spin around town on occasion, right? Well, I have an idea. Let’s carry him on a bed.”

C: “Three beds, good. Okay, the people have to know when we’re coming, so we’ll need a drum.”

B: “Good thinking. Of course, we’ll need to decorate it.”

C: “Really decorate it. Give the thing some heft, too. Make it 500 pounds. Carry it around on poles.”

B: “Nah, make it a thousand pounds, at least. Maybe more. Up to two thousand, I’d say. We’ll use thick poles.”

They all clap their hands once in approval and get to work.

These guys decided one big huge bed was the way to go: 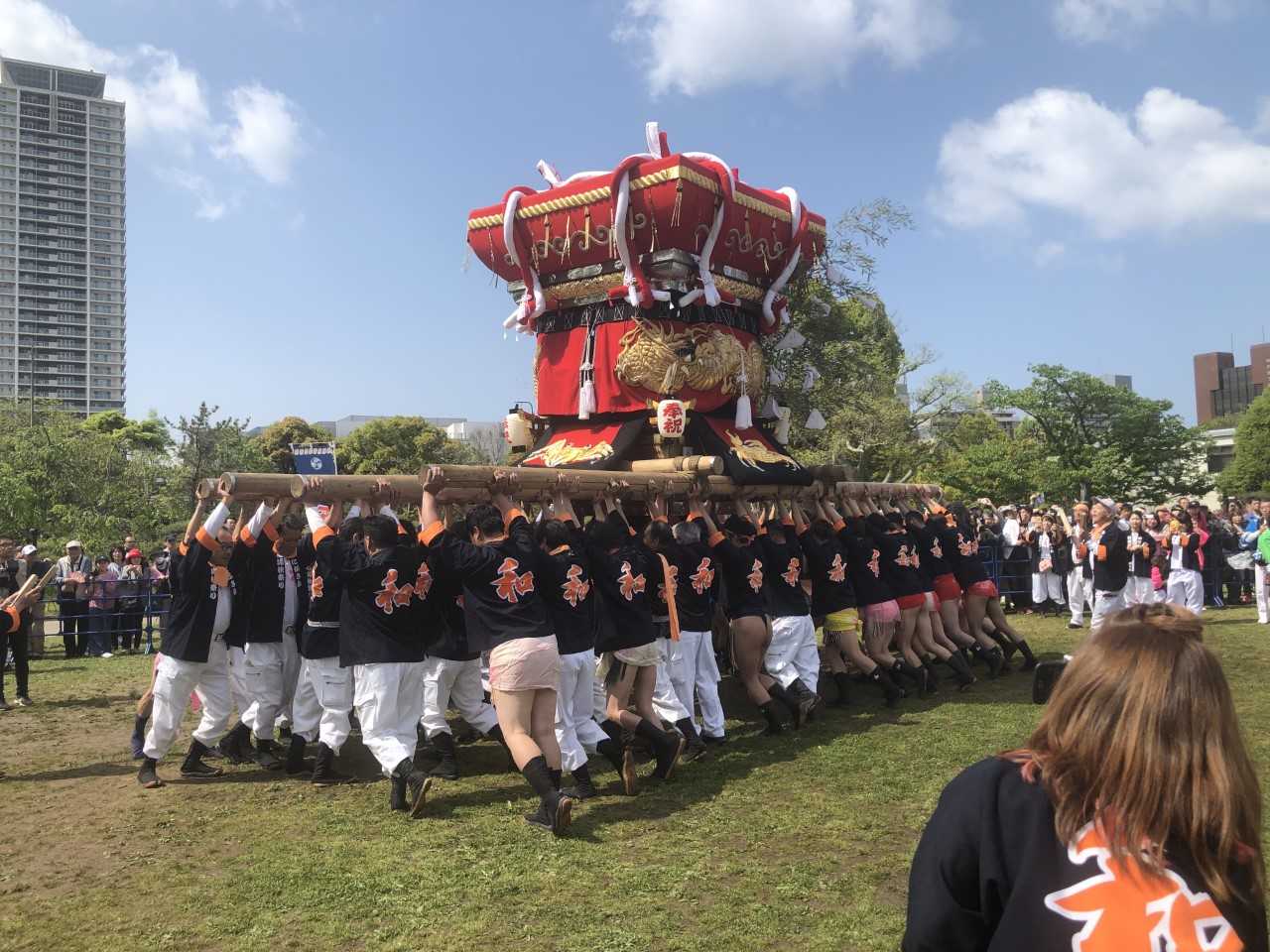 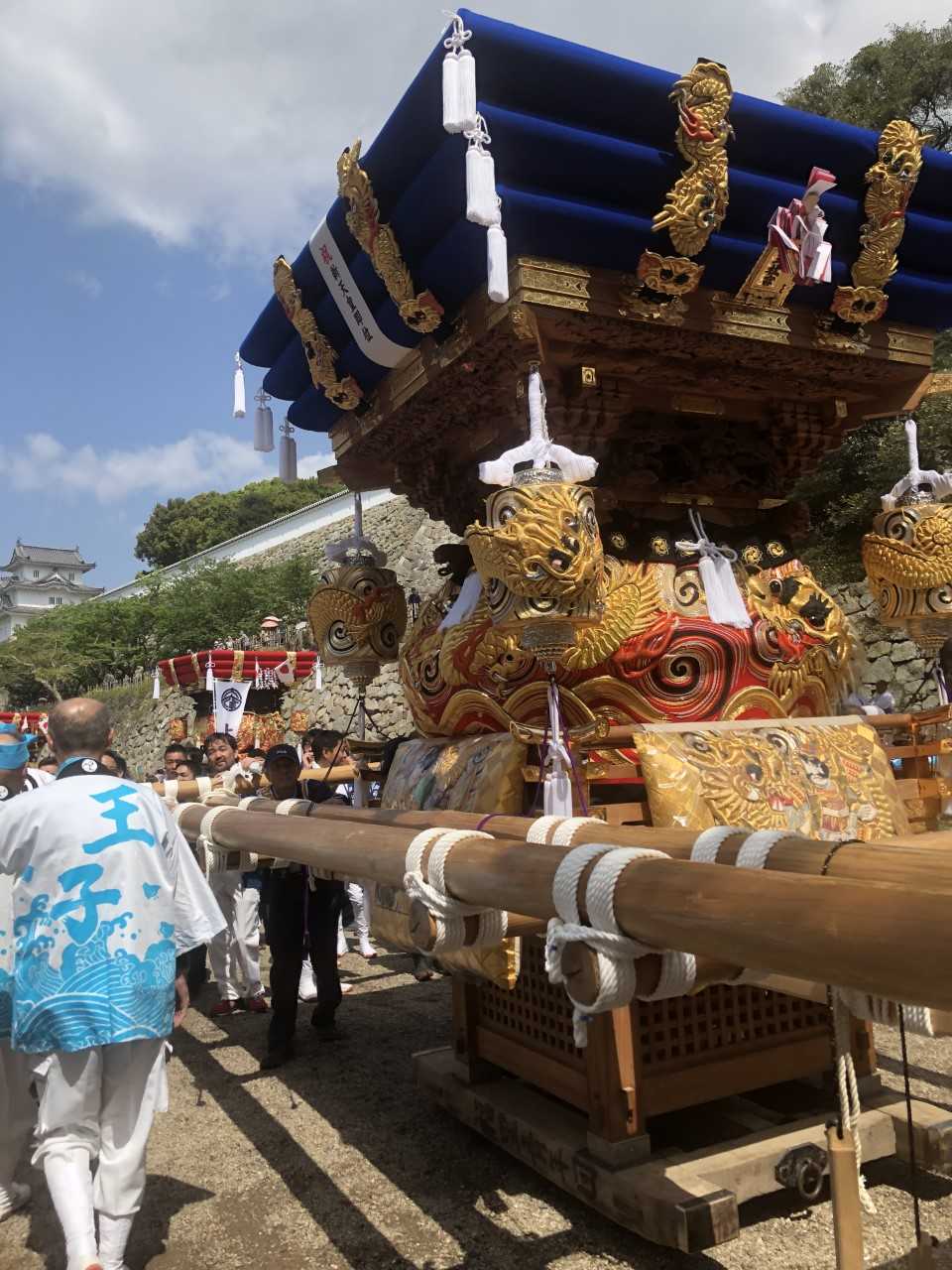 B: “Me, too, but I don’t think we should carry a god around in it. We need something even fancier for a god.”

C: “I agree, but let’s table that discussion for later. For now it’s enough to have someone inside the box beating the drum.”

D: “Well, there could also be a couple of guys on either side of it, maybe dancing.” 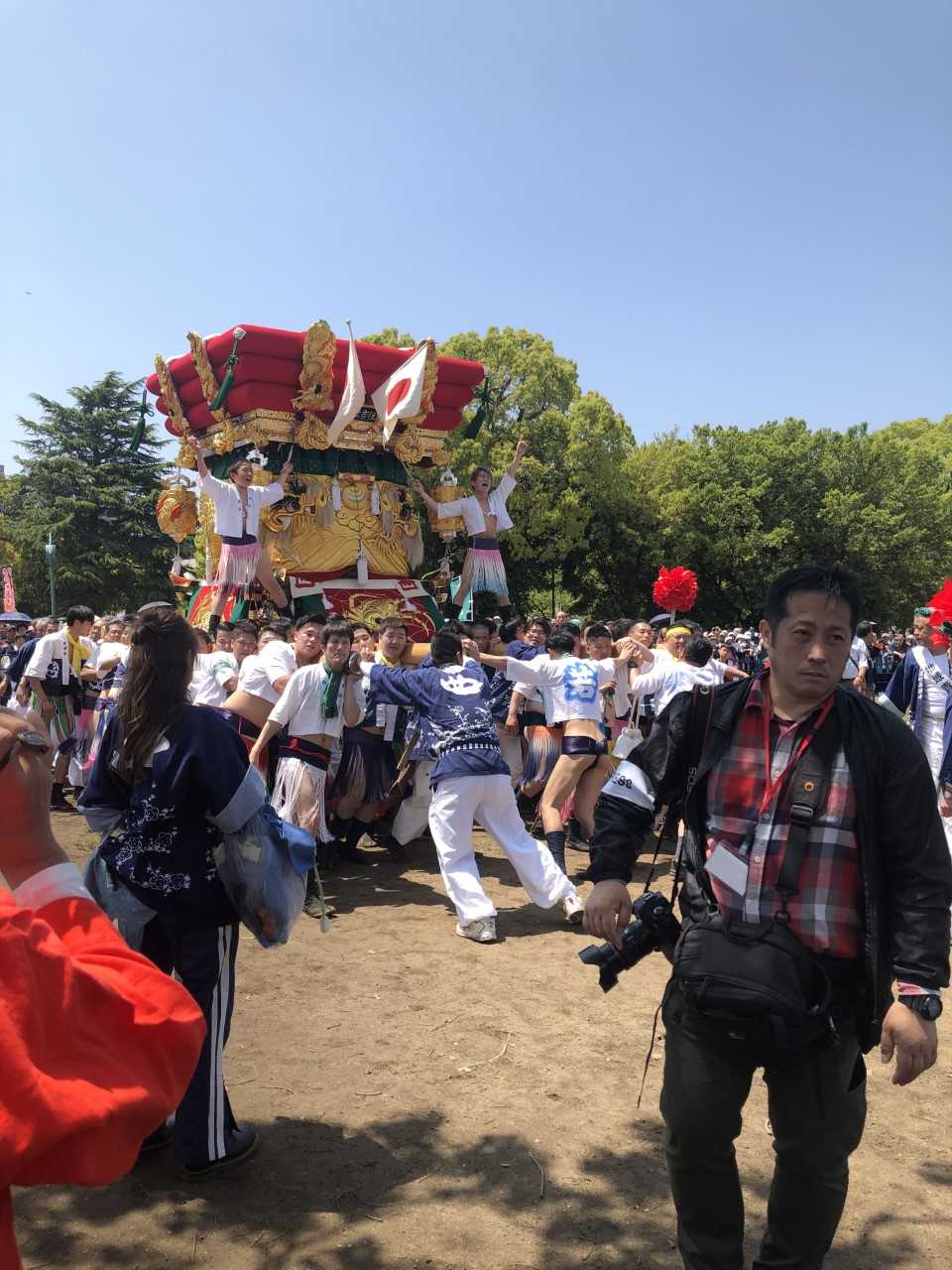 A: “Also, the guys – and we need forty of them – all have to be wearing the same thing. Whatever is traditional in their town.” 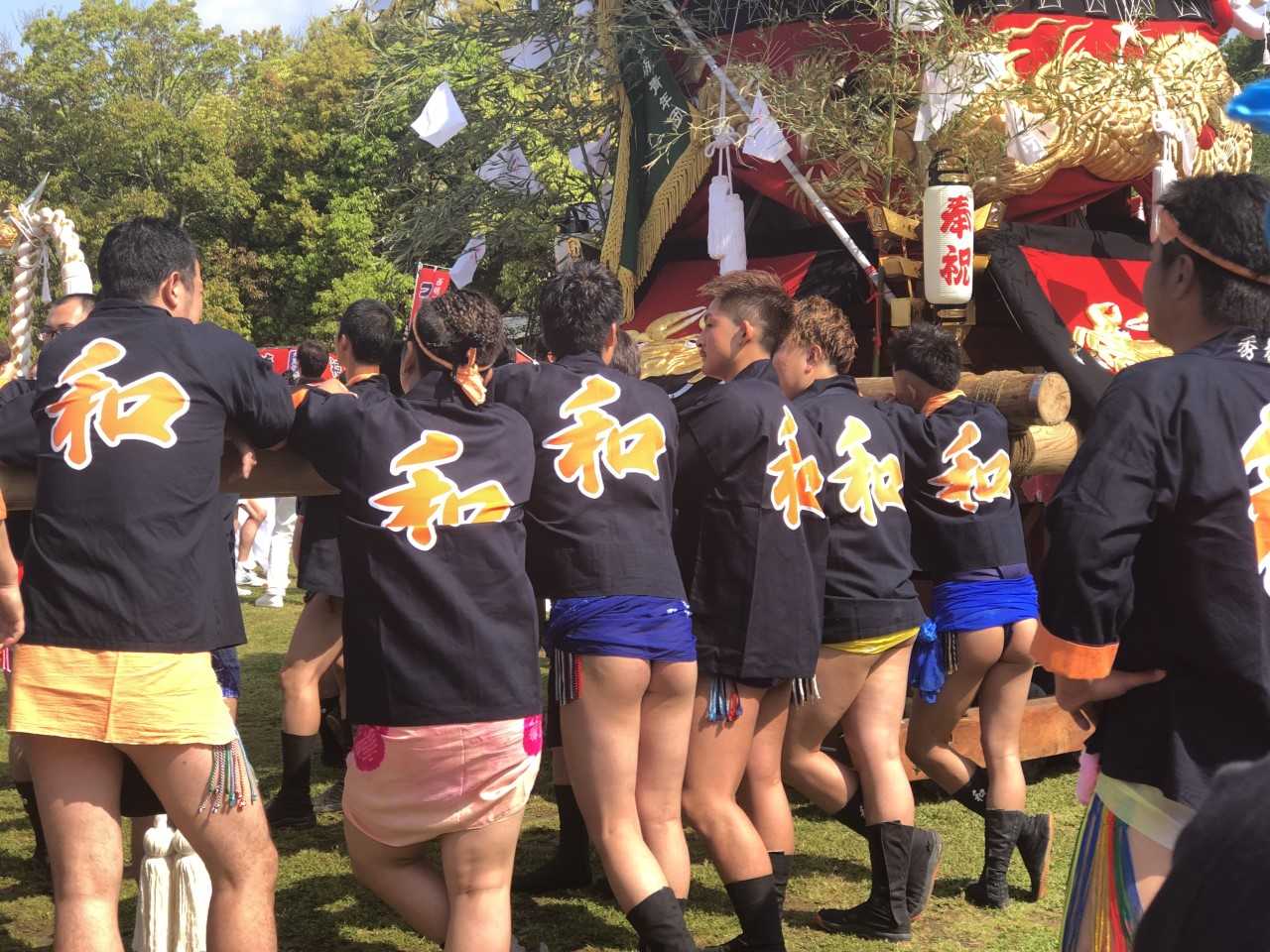 (Where is this town, exactly? JTA)

A: “Bed Drum is a hit. All the shrines in the area have one.”

B: “They’re all looking pretty good, too, and getting out in the street from time to time.”

Consternated silence. D pipes up, “Whatever they’re doing, they look great doing it.”

A: “So great that we should get a bunch of them together. Have a festival.”

B: “Twenty Bed Drums together would be awesome. Make a procession.”

C: “Fine idea. They’ll start in a staging area then proceed to an open field for an exhibition.” 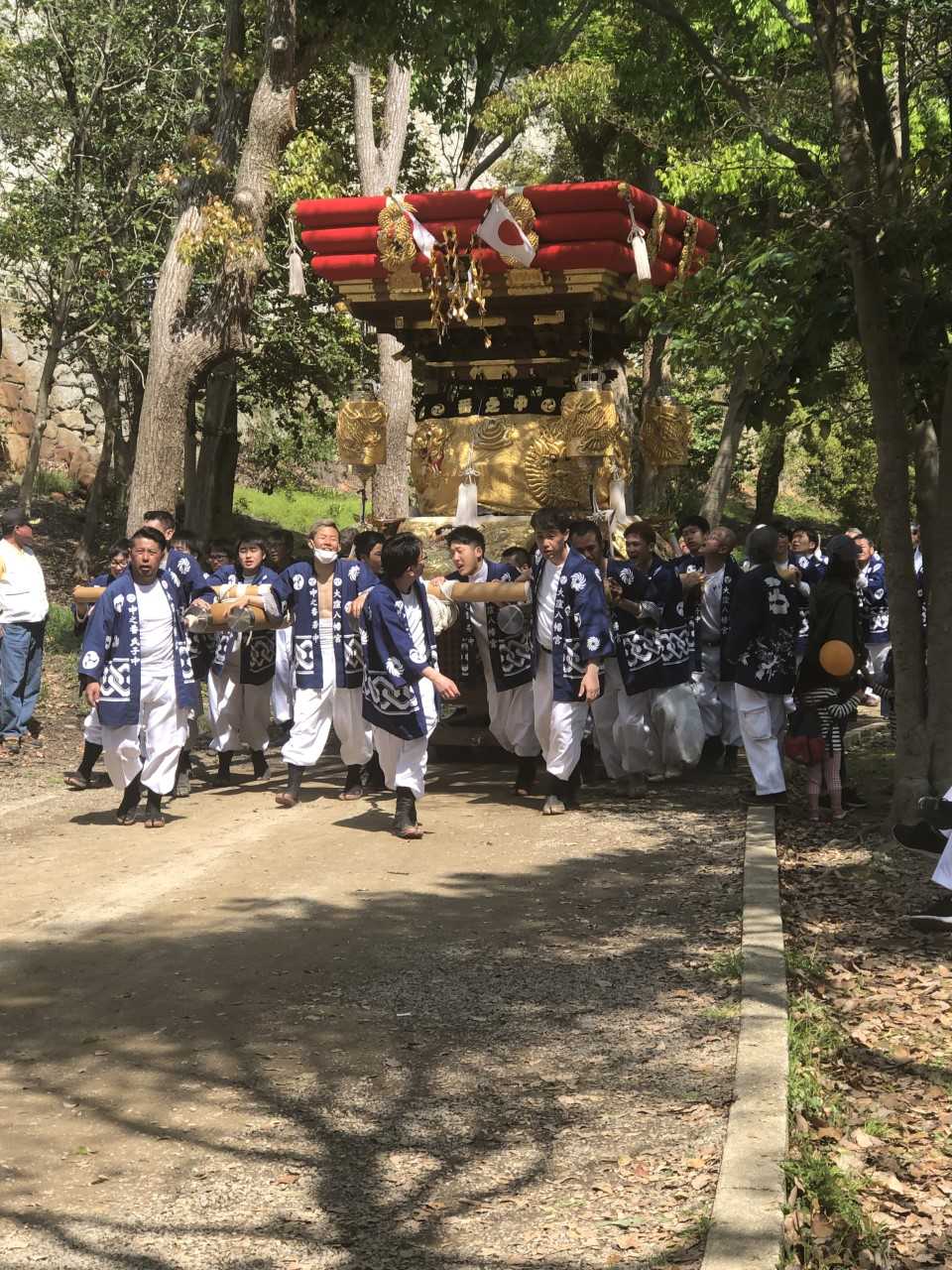 C: “We’ll need someone to keep it organized and moving along.” 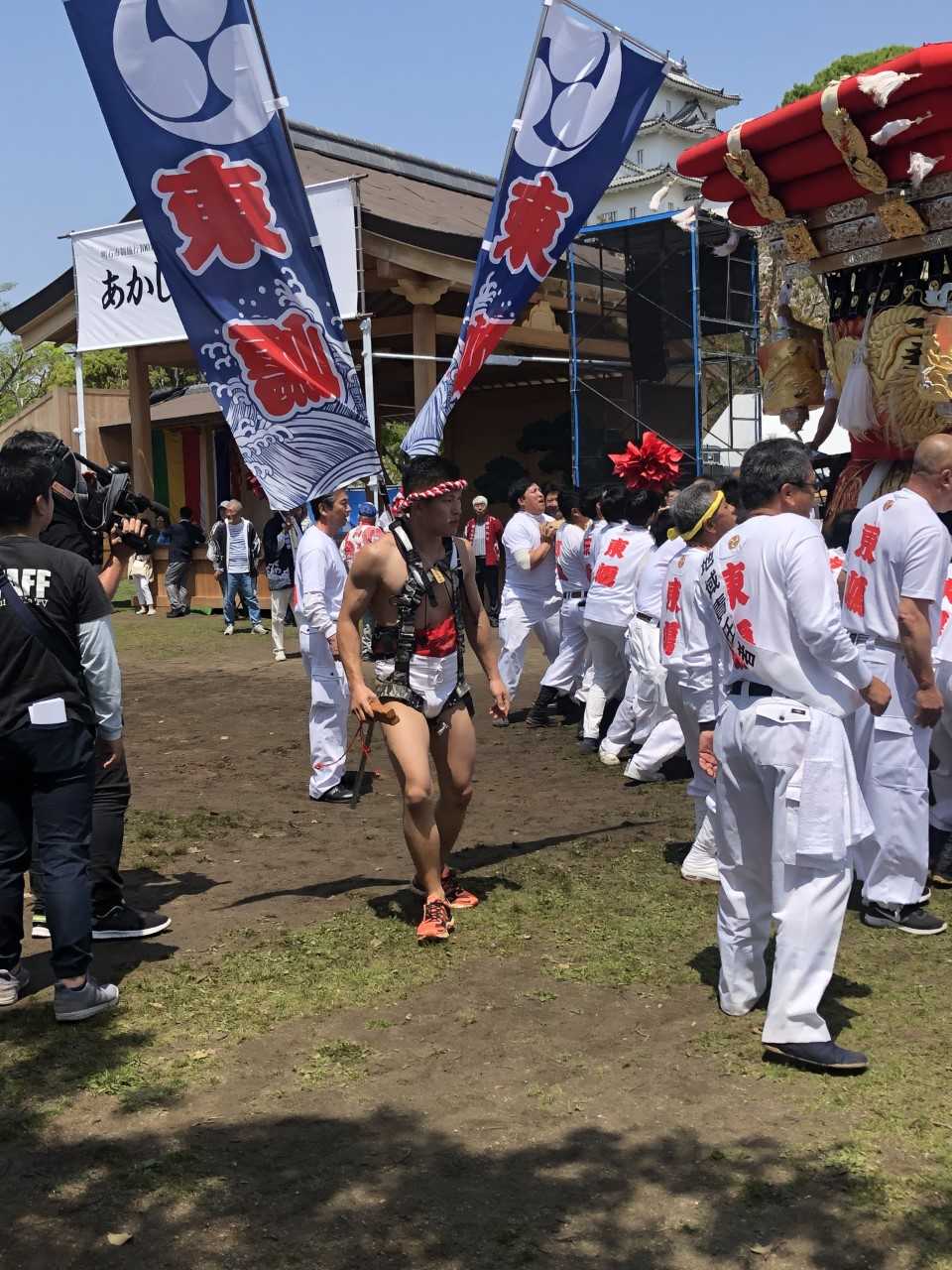 A: “Perfect. So, we’ll put four Bed Drums out in the field at once and have the teams display their strength.” 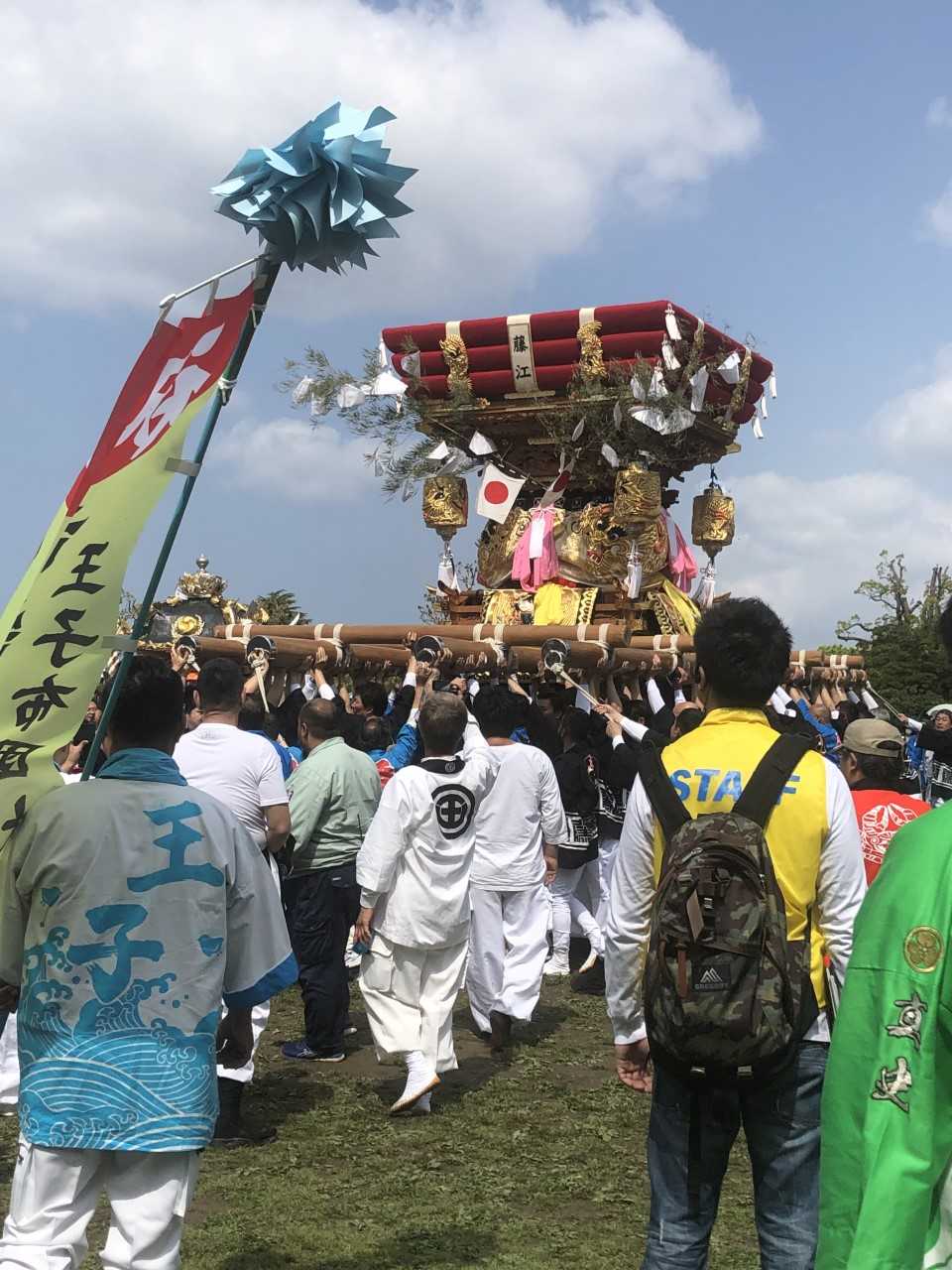 A: “That’s settled, then. Meeting adjourned.” 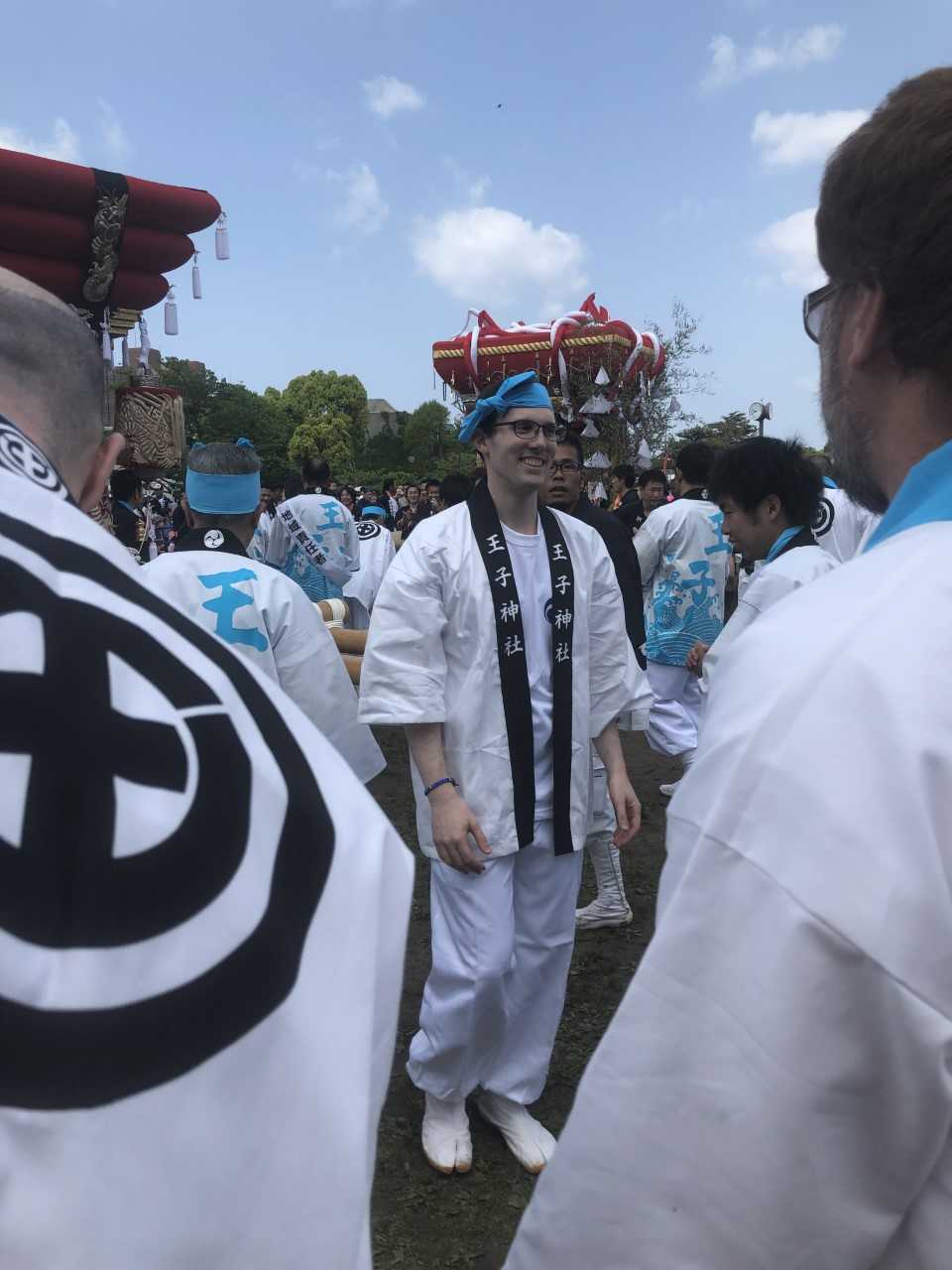 Here is Gerard after the performance of Akashi’s Prince (Ogi) Shrine. He is very happy because that darned thing is heavy – and they carried it for about twenty-five minutes!

Note: his shoes are called tabi. 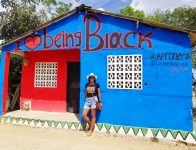