Basel to Geneva, by way of Biel in the mountains, is an extremely pleasant two-and-a-half-hour train ride.

Swiss trains are a dream. The schedule is precise, and the ride is smooth as silk. It doesn’t hurt that you have the gorgeous Swiss countryside to look out on. 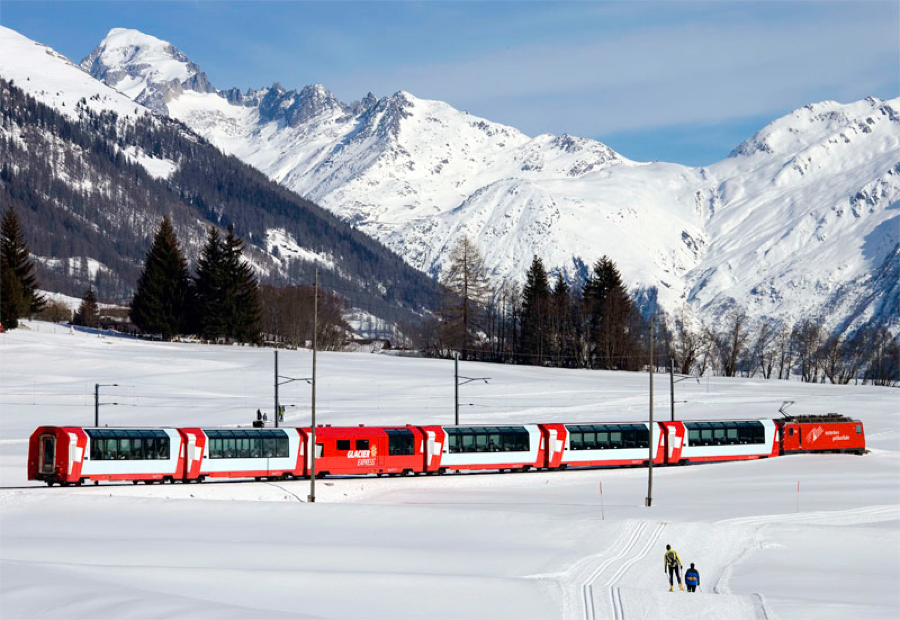 Swiss electrical plugs are less delightful. Even if I had thought to bring an adaptor from home, I wouldn’t have had the exact one needed in Switzerland, because you need three prongs for the wall socket, not the usual two. It’s a beaut: 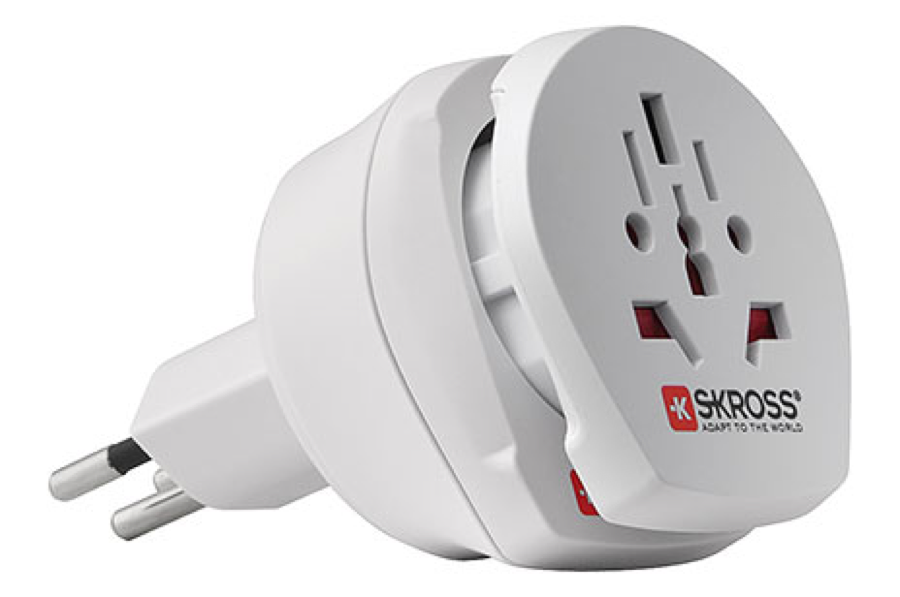 This situation is decidedly different than the one in Romania. If I open with Romanian and the Romanian hears my accent, they will 9 times out of 10 switch into English. At that point I have to say, “I’m sorry, I don’t speak English. I’m French.” It’s tiresome, and I always feel like I’m fighting to speak Romanian, except with my friends. In Switzerland, no such fight. Easy!

Geneva’s old town is charming, and my hotel is in the middle of it. Here’s a shot of St. Peter Cathedral visible from my hotel room balcony. 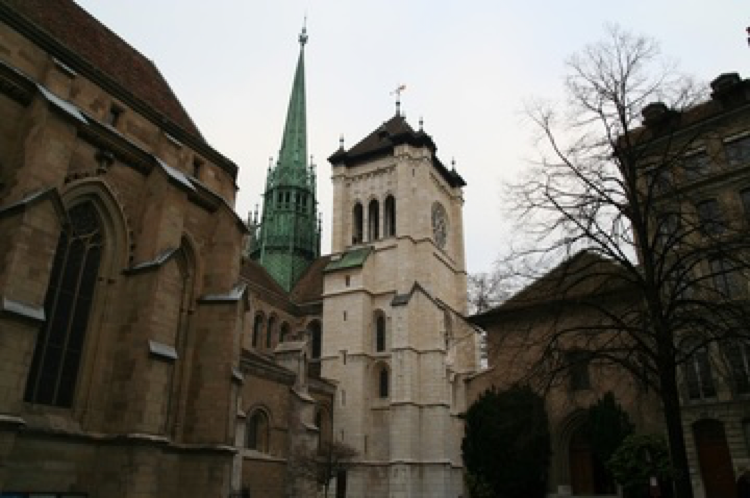 It’s the high point in the Geneva skyline. 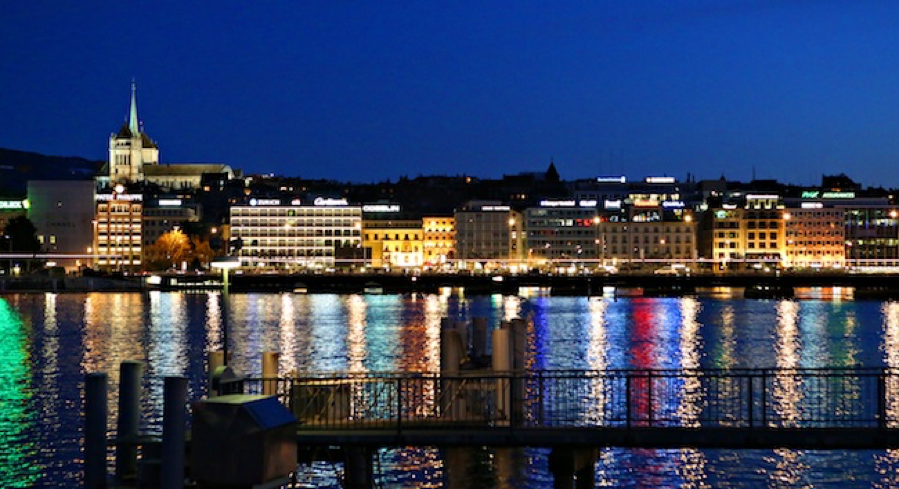 I’m seeing people sitting outside at the cafés. Here’s a shot of a café at Bourg-de-Four, the main square next to St. Peter Cathedral. All the people look perfectly comfortable. 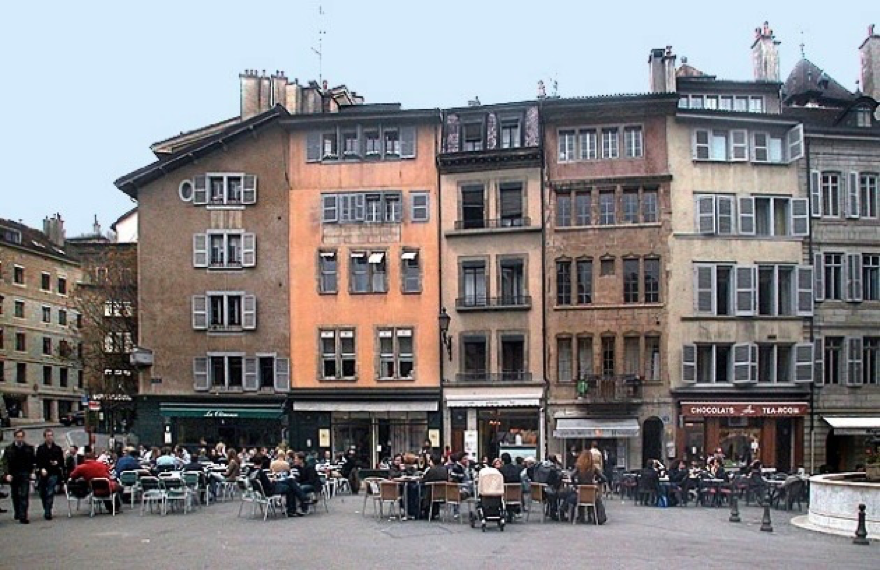 I think they’re crazy, which means that it’s official: I’m a wimp. Too many winters in Florida, I suppose.

Relatively recent religious history. Who would have guessed that Geneva was once the hotbed of religious revolt and reform? Anyone, I suppose, who knew that the French theologian and preacher John Calvin, the founder of Calvinism, established himself here as a Protestant Reformer. 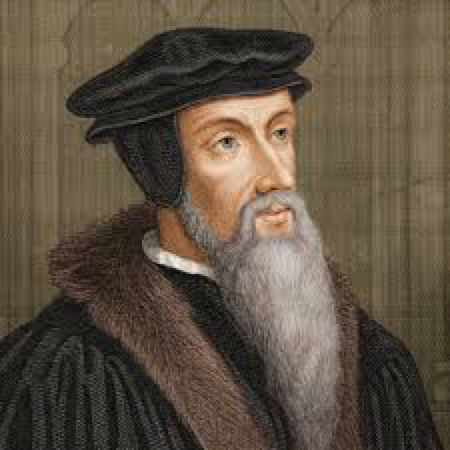 For those of you who did not know, Calvin was inspired by Martin Luther’s break with Roman Catholicism in 1515 and similarly broke with Rome in 1530. When widespread violence against Protestants erupted in France, Calvin fled to Switzerland and eventually ended in Geneva, which became a refuge for Protestants from all around Europe.

As I meandered through the Museum of the Reformation I was thinking of this history as interesting but a bit distant until I entered a room and came upon a reproduction of this print: 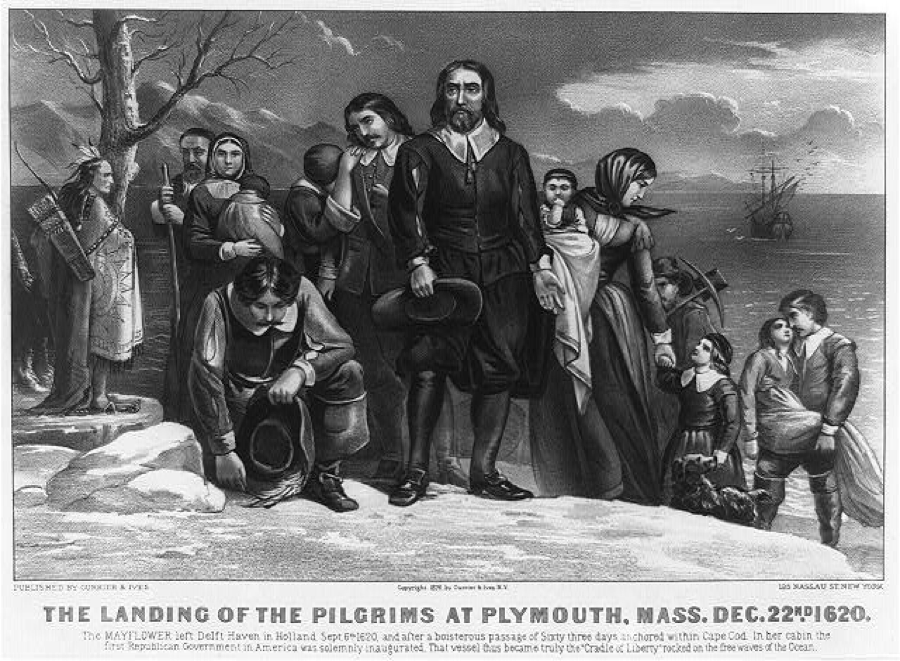 Right. There was also an English Reformation and Henry VIII created the Anglican Church in 1534, although his motives were largely personal and had to do with his marriages. Some people – who eventually became known as Puritans – wanted the religious reforms to go farther, and we know the end of that story. Cue: Thanksgiving. 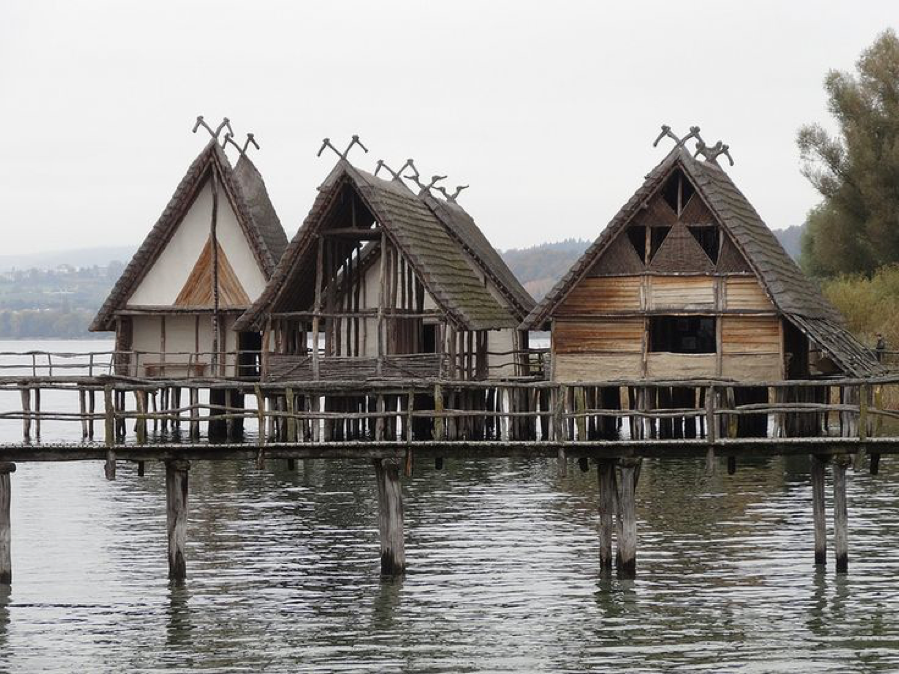 Once the Ice Age (120,000 – 12,000) ended and the glaciers receded in Europe, people moved into once inhospitable areas, and lake-dwelling communities arose around Switzerland’s many lakes. It’s not hard to imagine how bountiful life must have been here.

Geneva, Switzerland is very much worth the trip.