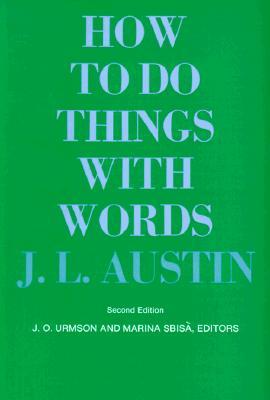 How To Do Things With Words 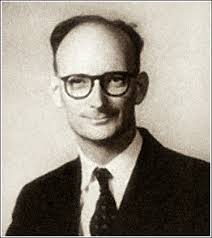 How To Do Things With Words: Austen’s Argument

What is the purpose of language?

Austen argues instead that the purpose of language is to make the world.

He approaches his argument by way of an example:

I bet you sixpence it will rain tomorrow.

A bet is not a description of some state of affairs. A bet brings a certain state of affairs into existence. One that could not come into existence without uttering the words “I bet.” And it is one with procedures for securing its effects. For instance, you must shake on it. And you must not have your fingers crossed behind your back. A bet puts some things in play and excludes others. If you have made a bet, shook on it in good faith and then lose, you must pay. If you decline to pay, it is not as if nothing happens. Rather, a new state of affairs comes into existence. You have now welshed on your bet. Your choice to welsh has further consequences. People in your community may decline to accept further bets you propose. Your reputation may suffer.

How To Do Things With Words: Austen’s Point

Austin calls utterances like “I bet you” performatives. They perform their own action. And they have effects. Language is full of such utterances. “I do” said at a wedding ceremony. And at the end of the ceremony, “I now pronounce you man and wife.” Or during a card game, “I bid five clubs.” We perform many actions with our words: christening, promising, ordering, warning, threatening, persuading, conceding, inciting. The list is long.

Austen is aware of the often blurry nature of our words. He writes, “Certainly the ways in which we talk about ‘action’ are liable here, as elsewhere, to be confusing. For example, we may contrast men of words with men of action, we may say they did nothing, only talked or said things: yet again, we may contrast only thinking something with actually saying it (out loud), in which context saying it is doing something.”

The blurriness of the concept ‘action’ notwithstanding, ultimately, for Austen, saying is indeed doing. Every utterance is performative. Every utterance makes the world. Puts certain things in play. And excludes others. Even statements are performatives. And for this reason: they cannot be understood outside of their context. They are responsible to the dimension of assessment in which they are uttered.

Austen’s example of a statement:

This is not a True or False description. For Austen, it is a rough one. It may be good enough for a top-ranking general. But not for a geographer. We can’t interpret the statement without knowing who issued it, for what purpose and to whom.

How To Do Things With Words: My Point

I never got the whole “the media take him literally but not seriously, his supporters take him seriously but not literally.”

Does anyone want to rethink this neat trick of oft-repeated sophistry? Over the past four years it has had a skewing effect on those who have bought into it. Or at least on those whose have rented it.

“Literally but not seriously” suggests “Empty rhetoric. Nothing to see here, folks.” (Sigh. Maybe we should just ignore all the noise.)

“Seriously but not literally” suggests “I get to interpret the words. I think he means X.” (And he has an automatic out.)

He has always been both: literal and serious. By literal I mean: His utterances, like everyone else’s, make the world. And by serious I mean: he says things, like everyone else, for particular intended effects. How do I know they’re intended? Because you keep doing more of what you’re doing when you get the effects you want. You only stop when you are not getting the effects you want, desire other effects, or someone stops you.

Final note: An important part of Austen’s language philosophy is his notion of uptake. For actions such a betting or marring, he understands their procedures to be conventional, that is, regarded by the community as valid. Innovations sometimes arise. But they don’t become conventional until there’s sufficient uptake in the community. For instance, I can’t draw a straight line from Queer Theory that arose in the 1990s to the Supreme Court decision to legalize gay marriage in all 50 states in 2015. However, during those decades the idea of gay marriage had acquired enough uptake in the general American population to pave the way for a federal decision. See also Ghost Marriage.