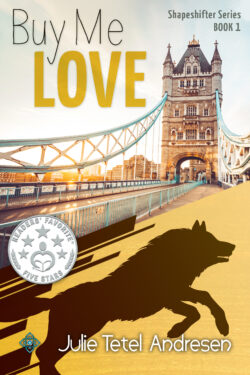 Detective Chief Inspector Moses Reilly of Scotland Yard is the consummate bachelor, married to his job. Few things please him more than bringing a criminal to justice.

Zelda Sachsen, after years of exile, has worked her way back to being a Guardian in G4S, a private security firm headquartered in London. She’s pleased that her Alpha, Egon Hanover, values her as having the best nose in the business.

When a spectacular murder is staged on Russell Square near G4S headquarters, Scotland Yard is called in to help. Hanover has enough mysterious clout to get Sachsen on Reilly’s team – to Reilly’s consternation. Even more disconcerting is the fact that Sachsen recognizes him as her mate, and the sexual chemistry swirling around them is evident to every last one of Reilly’s colleagues, given that Reilly and his team gather daily in Scotland Yard to work through the clues.

When Sachsen turns Reilly’s world upside down by claiming she’s a werewolf, he struggles to keep his facts-driven head long enough to crack the case. While closing in on the killer, Reilly shows every sign of rejecting the possibility that his sexy Sachsen is who she says she is. And if Sachsen can’t convince him that he’s her mate, she risks exile from her pack – again.

This is a complex case only True Love can solve, and Reilly’s head and heart teeter in the balance.