Love and the City 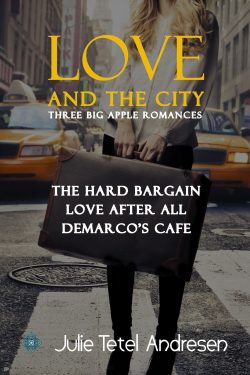 Can the Big Apple deliver on not one, not two, but three more love stories in its already storied history?

Gino Milano, recent widower and highly successful New York restaurateur, needs a date to fend off the advances of women at his own weekend of fundraising events. These involve cancer, since his beloved Rosie died of the disease.

Laurel and Gino are from different worlds and have very different experiences with love and family life. When they team up to help each other out, Laurel thinks things are going well when Gino doesn’t. And Gino thinks things are going well when Laurel doesn’t. At one point it looks like Gino’s trip to Laurel’s reunion is off. Then it’s on again. And all is going surprisingly well at the beautiful Duke reunion in glorious April until Laurel’s ex ruins everything – at least as far as Laurel is concerned.

Back in New York City can Gino and Laurel get on the same page and get it together?

New York billionaire Arthur Wexler needs a faux fiancée for one Sunday afternoon and one afternoon only. Actor Carla Pereira happily accepts a hefty paycheck for a few hours work. However, she plays her part so well that her role unexpectedly gets an extended run: it now includes a week-long Caribbean cruise on the Wexler yacht with friends and family.

Carla’s no dummy. She knows that, as a poor girl from Hoboken, she’ll never land a permanent part in the Wexler family cast. So, upon returning to the city after the cruise, she makes herself scarce. She did her best not to fall in love with Arthur on the cruise – and mostly succeeded – but now she’s back in the real world and attending to the broken pieces of her miserable family life.

Arthur is surprised when Carla ghosts him, and he now has to confront his own feelings. When he does, he realizes he has to figure out a way to track down the woman whose stage name is Carla Pereira.

Even if he can find her and establish a relationship, there’s still the pesky matter of what to say about the hoax Arthur and Carla perpetrated on the Wexler family when they first introduced her by a completely different name.

So, just who is this Carla person, and what is she hiding?