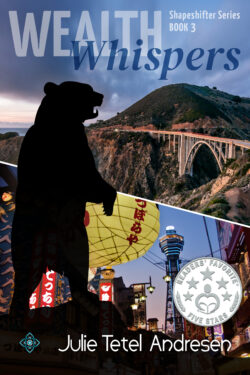 Heather Carver travels to California on the trail of her sister, Trish, who’s gone missing. Once in Oakland, where Trish was last seen, Heather is alarmed to learn that her sister may be the victim of a cybercrime. Even worse, evidence suggests that Trish may have been taken hostage by the Nishi-gumi, a powerful and vicious Japanese gang from Osaka.

Julian Kita is a famous manga artist and a Japanese American werebear who lives in the Bay Area. With his transpacific cultural connections, he’s in the best position to help Heather find Trish, and so he and Heather join forces.

Together they plunge into adventure: from a cosplay event in Oakland, down to Big Sur, then on to Tokyo and Osaka. Along the way they contend with a cocky coder from Silicon Valley, clash with the Nishi-gumi and come face to face with a fearsome warrior known as the Female Scorpion.

While searching for Trish and trying to stay alive, they confront further challenges. Can Heather accept Julian as part of an ancient werebear clan, and dare to discover her own passionate animal nature? And can Julian’s damaged bear heart open to the possibility of a new human love?