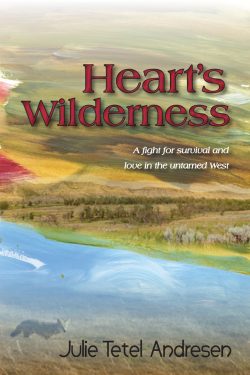 Sarah knows that a proper Baltimore miss shouldn’t even glance at a man who has lost all his clothing, but the barefaced truth is that the Man Beast running toward her is utterly naked. What’s worse, now that she has been separated from her family and their wagon train attacked, the Man Beast appears to be the only thing standing between her and disaster.

Sarah Ross Harris is a beautiful idiot, Wesley Powell reasons. Who else argues with a buck-naked stranger fleeing a murderous group of Sioux squaws? How on earth will the two of them ever survive the dangers that lie ahead, with her complaints and society airs and just plain impracticality? And here they are stranded alone and together in the midst of hundreds and thousands of acres of wilderness – the exact count of which Wesley and his team of surveyors have been sent from Washington, D.C. to determine.

Sarah and Wesley encounter heat, hunger, lashing rain, Indians, nosy pioneers, and the company of a mangy wolf. All the while Sarah fears the fate of her family and Wesley his team of surveyors.

But the absolute worst? Their mutual attraction was infinitely tempting and utterly impossible!