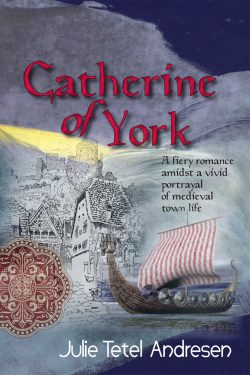 Lovely Catherine of York is known for her piety and her skill as mistress of a broidery house. Only a few know of her family’s royal past in France or the scandalous demands that sent her fleeing the debauchery of King John’s court. Her single-minded goal is to buy her younger half-sister’s rightful place in the royal court. To succeed, she needs first to make bold investments with good returns and then to back the man who will eventually secure the English throne. Will it be John of England or Louis of France?

Into Catherine’s world strides a great, blond-haired Viking. He demands payment of a debt in gold or goods from one of her risky investments gone wrong. From where has the man called Eric Shipwright come? What perilous seas has he sailed? And who does this shrewd sailor think will sit on the throne by year’s end?

But, more importantly, once she agrees to go into business with him, why does his very presence set her blood racing and her limbs trembling, blinding her to everything but an irresistible desire to taste his salt-kissed lip and drown in the depths of his stormy passion? She could lose her very life if she gives herself to this possible spy in sailor’s clothing – and lose her heart forever if she doesn’t take him for her beloved and her lord.