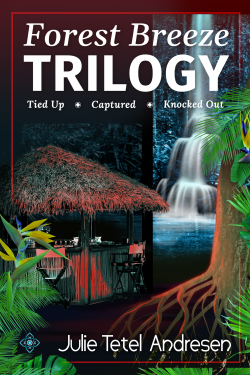 Sarah Hamilton, a specialist in orphans, is brought to Vietnam on a government assignment to track down a child-trafficking ring thought to be operating out of local orphanages.

Nate Wilkins, who does covert clean-up ops around the globe, has also come to Vietnam on the assignment. He last saw Sarah ten years earlier, and although he’s always had feelings for her, he has never acted on them.

What he doesn’t anticipate is that Rachel will soon arrive at Rolling Thunder’s compound in a disastrous case of mistaken capture. Nor does he anticipate that she seems to be in a kind of trouble even she doesn’t know she’s in. Which means she’s better off with Rolling Thunder for the moment than she is on her own in town.

Suddenly aware of dangers to his brothers and, perhaps, even to a heart he didn’t know he had, Eagle has to keep his club rolling smooth and his feelings for Rachel in check. All the while keeping everyone safe while he figures out who the bad guys are.

And, for her part, nice girl Rachel isn’t going to seriously fall for a sexy biker boy, is she?

Brisa is in Vietnam on a covert assignment to bring down the very top of an international child-trafficking ring, many of whose weaker links have been arrested or killed in the last six months. Her job is to enter an upcoming mixed-martial arts championship in Saigon so she can scope out the local low life. In her training gym, she meets Wings, a big, handsome man who takes an inconvenient attraction to her.

While Brisa moves in on the traffickers, Wings moves in on her. But all Brisa wants is for him to get out of her way. Yet Wings has a knack of turning up exactly when she needs him. Often enough, in fact, that Brisa begins to wonder whether she might consider … no, she has never wanted a man in her life, and she doesn’t want one now.

Wings is thankful to be on hand when she needs him most: fighting for her life. He’ll do anything to save her – even if it means letting her go.