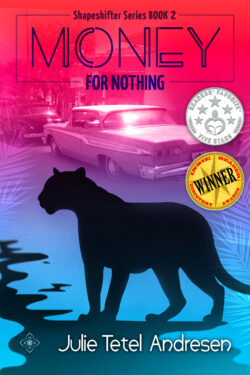 Wendy Osceola wants a place to lick her wounds far from her werepanther family tainted by her brother’s recent arrest. So, she’s fled Miami and set up her private investigation service in Orlando. One fine morning her excellent tracking instincts lead her to the backyard of a neighbor where she happens upon a strange scene – and an even stranger and intriguing gadget her neighbor gives her permission to pocket.

Jackson Cypress is devoted both to his job as Chief Deputy of the Miami PD and to his place at the top of the werepanther hierarchy. His job has taken him to Orlando to follow through on a case involving a ring of on-line love scammers that started in London. The investigation leads him to a strange scene in a backyard where he finds another werepanther – a beautiful she-cat he has never met before.

Turns out, Wendy has the skills Jackson needs, and he recruits her help in cracking the case.  Sparks fly and then intensify when the two set out on a chase that takes them back to Miami. There Wendy has to confront her feelings for the sexy were she can never have. And Jackson has to choose between following his heart or doing his duty to marry the werepanther princess his clan has already chosen for him.

Their problem’s mount. Wendy’s brother goes on the lam. The mysterious gadget in her pocket seems to be involved in the love scam case. But what does the Russian mob have to do with it?