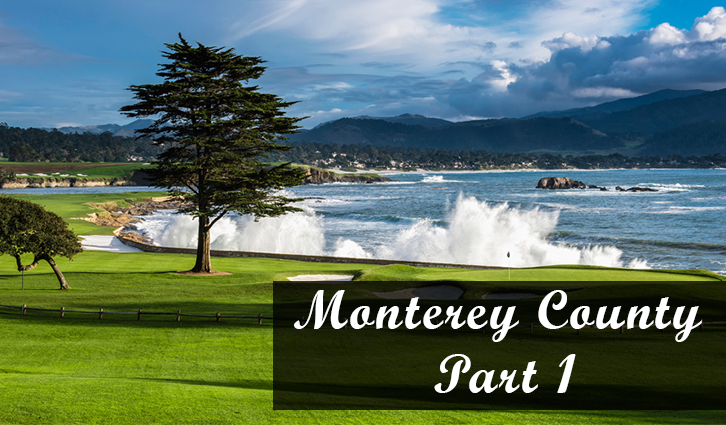 “Monterey County Part I” could also be called Clint Eastwood Country. The places at issue are the picturesque town of Carmel-by-the-sea and Carmel Valley.

I’m lucky enough to be staying this week in Carmel Valley. Here’s my view: The valley is particularly lush this time of year

The reason Eastwood comes so easily to mind is because he was once mayor of Carmel. Eastwood is also the owner of Carmel’s Mission Ranch Hotel and Restaurant:

It sits on 22 acres and has views of Point Lobos, Carmel River Beach and the Pacific Ocean.

Here’s a link to the website, which has a Web Cam on the home page so you can see for yourself: … and has a home on the property: You get a glimpse of his sprawling, Mediterranean-style house in the background. I like the row of succulents in the foreground

The valley, like so many in northern California, has vineyards: The Bernardus Lodge also has a spa

The town of Carmel is chock full of picturesque houses, such as this one built by poet Robinson Jeffers (1887-1962): Here’s a quote (that has nothing to do with the California coast):

Perhaps because of its beauty the area has drawn many artists. Scottish writer Robert Louis Stevenson (1850-1894) came here and wrote for the local Monterey newspaper. He now has a local high school named after him. I cannot resist noting that Kerouac wrote his most famous novel, On The Road, in this house in Orlando, Florida: Back to Carmel. Hollywood notables who live here include Doris Day, Betty White and Michael Nesbith of the late ‘60s band The Monkees. Nesmith is the cover story of the Spring 2017 edition of Carmel magazine. Ocean Avenue leads on a downward slope to the Pacific Ocean

Next to Carmel is the scenic 17-mile drive that includes vistas like this:

This drive is technically in the unincorporated community of Pebble Beach, which lies between Carmel and Monterey. Point of information: Pebble Beach is a links course, the oldest style of layout first developed in Scotland. And now for a bit of golf trivia. From Golfweek we have:

“A links course is along the sea, consists of sandy soil and has little vegetation other than tall sea grasses and gorse, a hearty low-growing evergreen plant. The natural terrain is used to develop the golf holes. Many of the bunkers were once natural windswept dunes. The layout of the holes is also part of a true links course, with the first nine going out to the farthest point from the clubhouse and the second nine bringing you back.”

The more usual golf course is laid out more like this (and is also not near a coast): This is August National in Georgia, and you can see it’s more of a zigzag

When I sit down to write a blog I often don’t know where I’ll end up. I certainly wouldn’t have predicted golf, but that’s what happened today!

The main point is: if you ever have a chance, you will greatly enjoy a visit to beautiful Carmel and Carmel Valley.