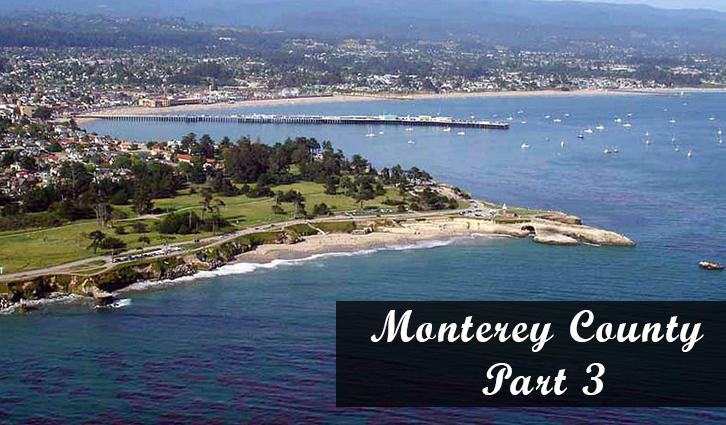 Today is about the town of Monterey, which is on the Bay, so you’re looking at it. Just as Monterey County is rich in beauty, artistic endeavor, agriculture and fishing, so the town at its center has an equally rich heritage.

The Costanoan Rumsen Ohlone Tribe lived on the peninsula for thousands of years. They also used abalone for decorative purposes. Abalone is a sea snail with iridescent shells: For more on the Tribe visit here.

The Spanish settlement began in 1602 when Sebastian Vizcaíno entered the bay, searching for a safe harbor for richly laden Spanish galleons returning from the Philippines. He claimed the place and named it after the Viceroy of New Spain, Gaspar de Zúñiga y Azvedo, Count of Monte Rey. In 1775 Monterey became the capital of California and would remain so under both Spanish and Mexican rule.

The Mexican Period began in 1821 when Mexico obtained independence from Spain. Custom House, the oldest government building in California. This was the only place where traders were allowed to bring goods, either coming into California or out of it

Monterey is full of adobe houses, such as Stokes Adobe, built in 1833: We learned that, early in the 19th century, houses were not made of wood primarily because there were no saws. So the most available building material was sun-dried adobe, which means ‘mud brick’ in Spanish. Because of its weight the original abodes were one story. Only after trade was established with Boston did saws come into the picture.

To remind you of the trade route before the Panama Canal (1914): The American Period began in 1846 when, during the Mexican-American war, Americans raised the flag over Custom House. Once California was claimed for the United States, the American government’s goal of creating a nation stretching “from sea to shining sea” was realized. Colton Hall, the place where the constitutional convention was held and the first constitution of California was drafted

In our tour of Colton Hall, we learned the reason why California became the 31st state, joining the Union in 1850 well before all other Western states (e.g. Arizona 1912) and even some mid-Western ones (e.g. Minnesota 1858).

A one-word answer: gold – and the resulting mayhem of the gold rush of 1849. Haphazard encampments + gold + alcohol + greed = the reason why the governors of California saw a need for law and order and thus appealed to Washington D.C.

Linguistic aside: Many common expressions in American English today arose during the gold rush: to pan out, to strike it rich and to stake a claim.

The gold rush also moved the centers of commerce and politics north to San Francisco and Sacramento after which Monterey became isolated socially and economically.

In 1855 Monterey turned to whaling then in the early 1900s became a center of a thriving fishing and canning industry. Fisherman’s Wharf #2 is where the fishing action is today

Ocean View Avenue was once lined with sardine canneries and became known as (and then renamed) Cannery Row: We’re back to John Steinbeck and his famous story about the people living and working there, published in 1954.

Not to be missed is the Monterey Bay Aquarium:

Download their seafood watch app to help figure out what to order on the menu in terms of Best Choices, Good Alternatives and Avoid.

Among the 17 Good Alternatives can be found Dungeness Crab and Tilapia from various sources.

To Avoid are another 20 fish, among them Pacific Cod (Japan & Russia), imported Mahi Mahi and Columbia River and Puget Sound salmon.

Monterey is rich in history and culture.