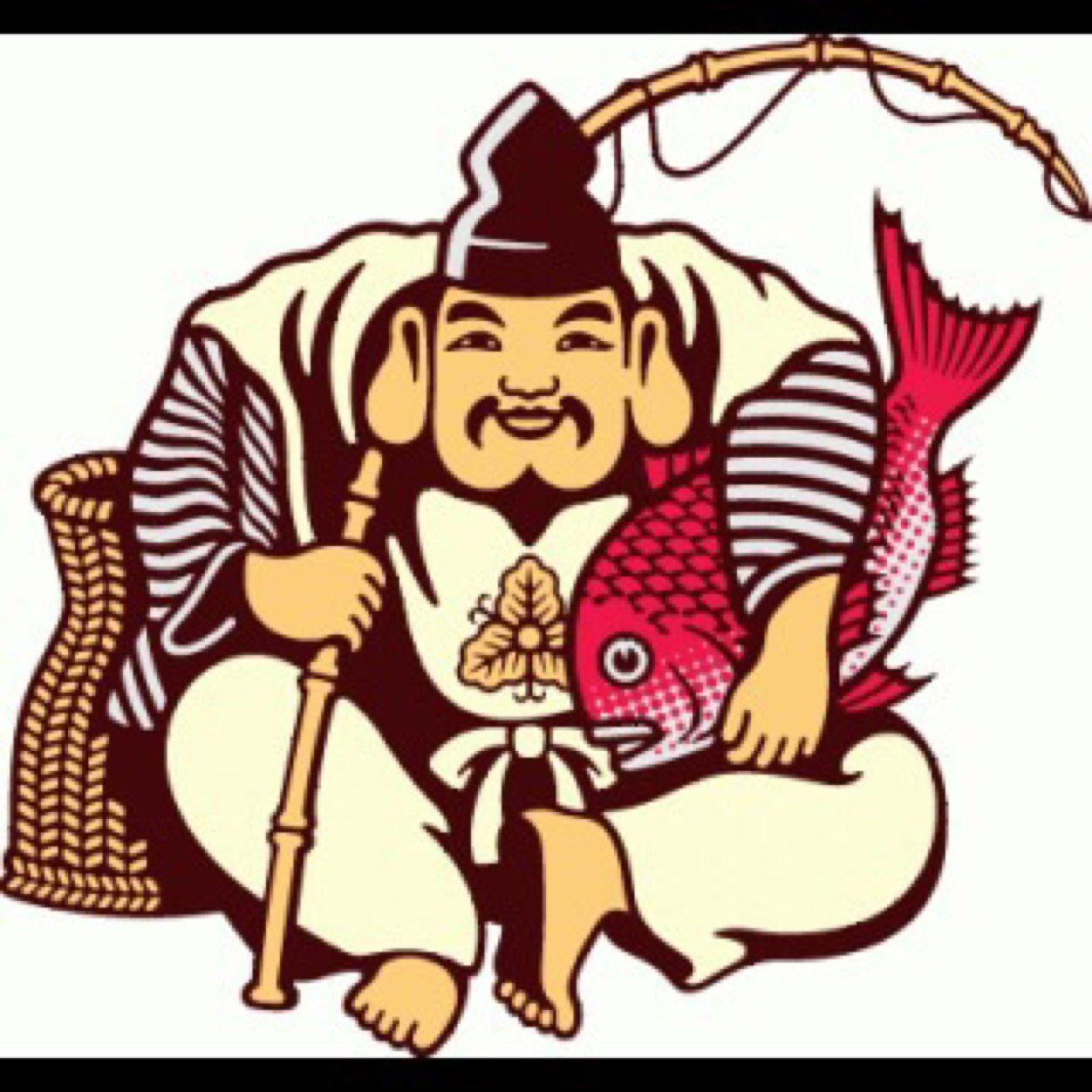 Sunday, April 21, was Easter. Gerard and I went to the general meeting of the Nishinomiya Shrine. It is located in none other than Nishinomiya City.

The shrine honors Ebisu, the Japanese god of fishermen and luck. He is one of the Seven Gods of Fortune, which makes him important. He is also, apparently, the only one of the seven to have an exclusively Japanese origin, with no influence from Hindu gods. Known as “the laughing god,”  he is depicted holding a rod and large red sea bream.

The particular image of him I chose for the title image is the one on the label of Yebisu beer. This was the brand we drank – liberally – at the meal following the general meeting. 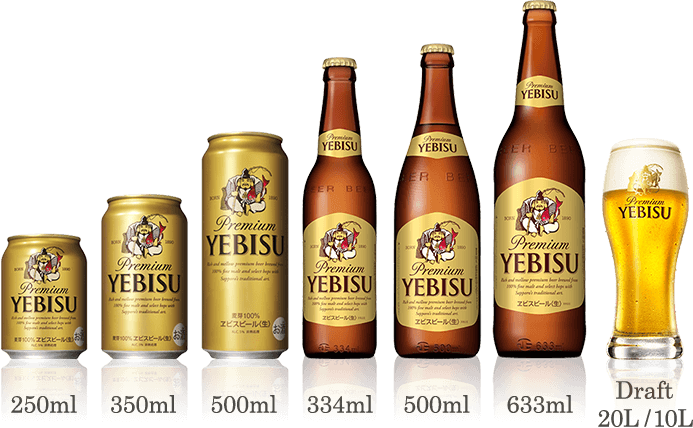 Why bring this up?

I just checked to see if there was Jesus beer, and there is. However, those brands are kitschy, and it’s hard to imagine (I could be wrong) that a church committee would drink the brand after a meeting. However, at the Nishinomiya Shrine meeting, it was completely appropriate to drink the beer of the laughing god.

Also no problem making Ebisu the namesake of the Ebista shopping mall, a very upscale one (to my eyes, anyway). 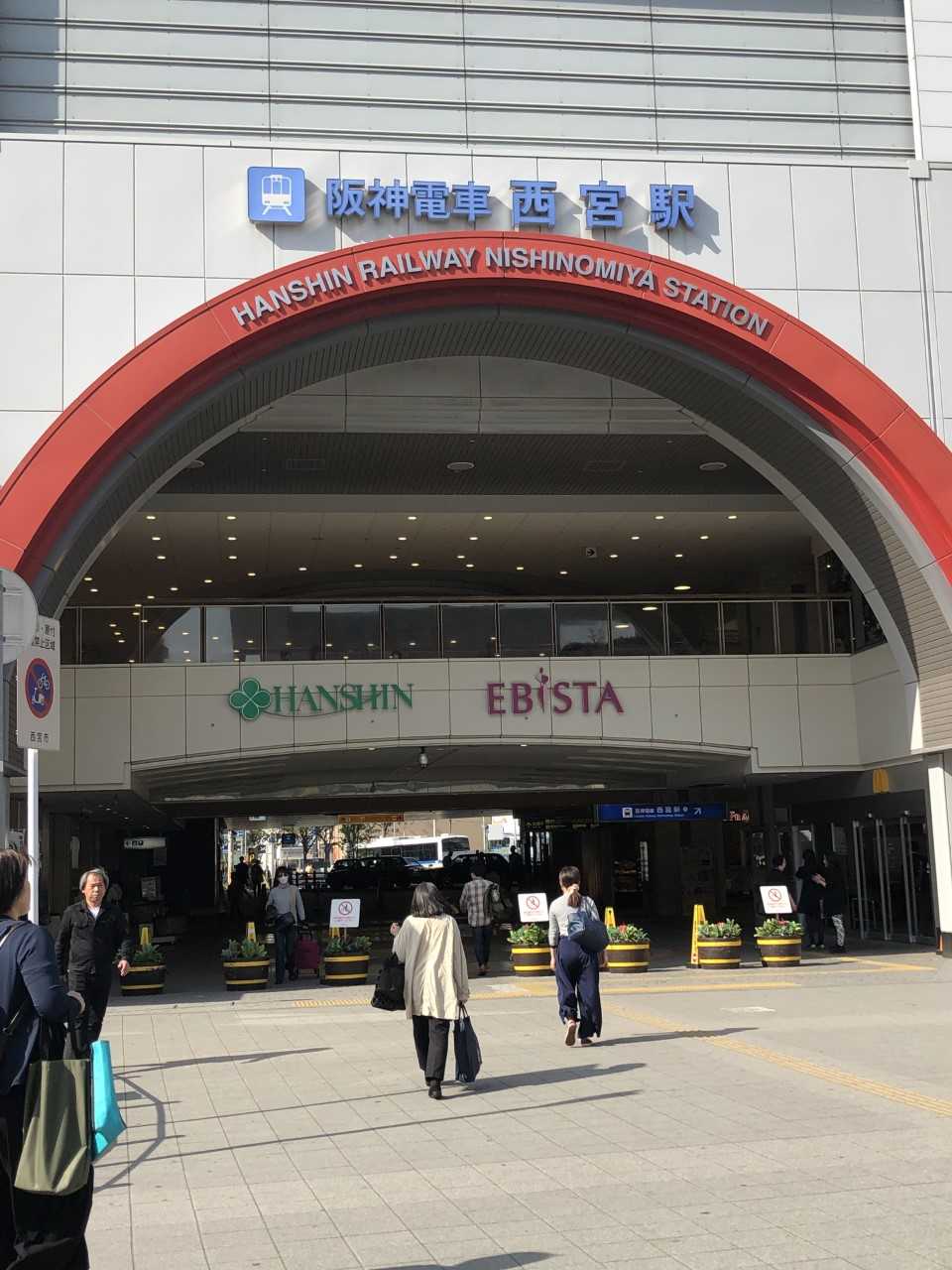 The shrine covers a very big block in a densely crowded city. It has a good dozen structures on it, and plenty of trees, making it an oasis of cool on a warm day. 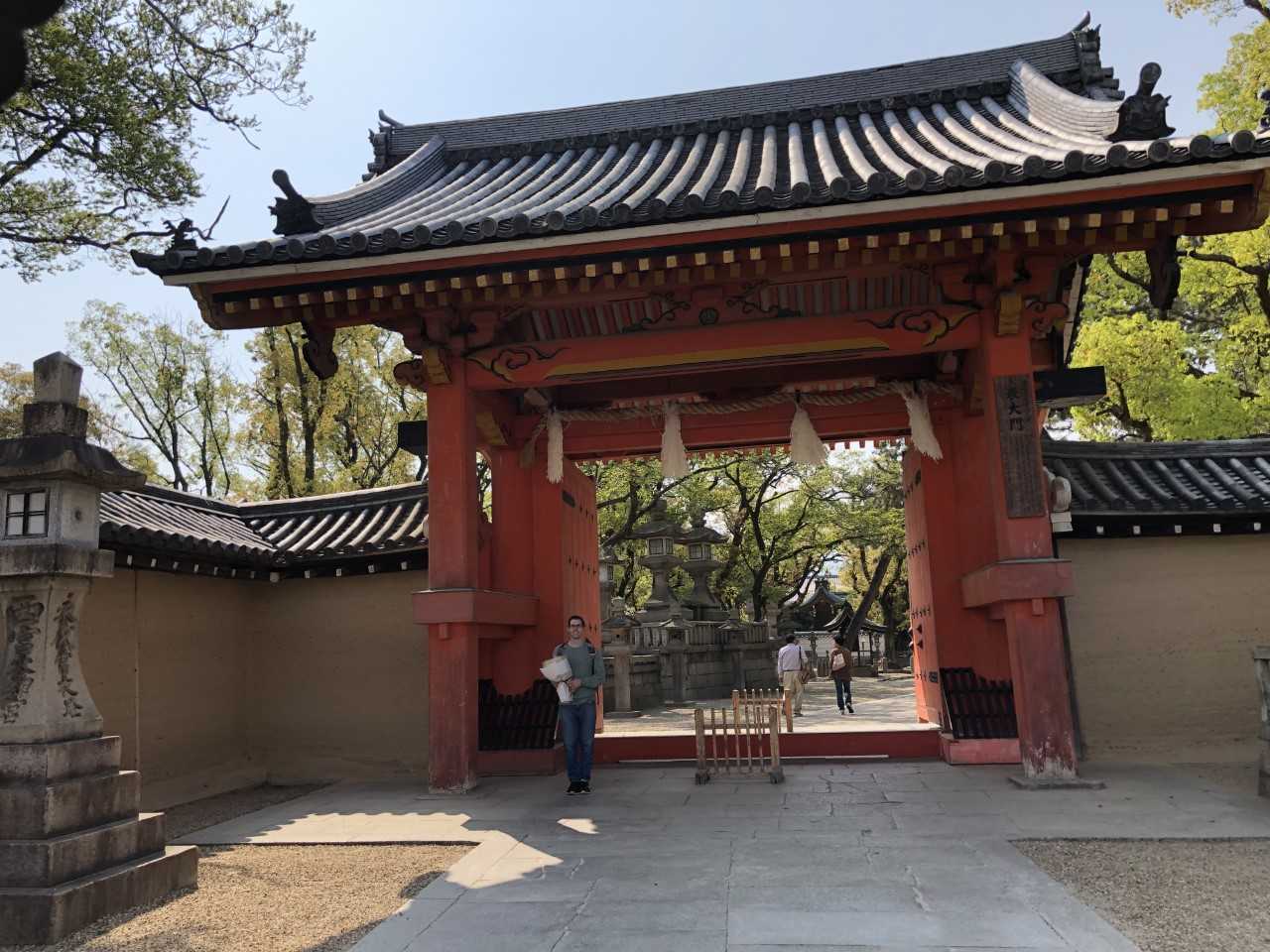 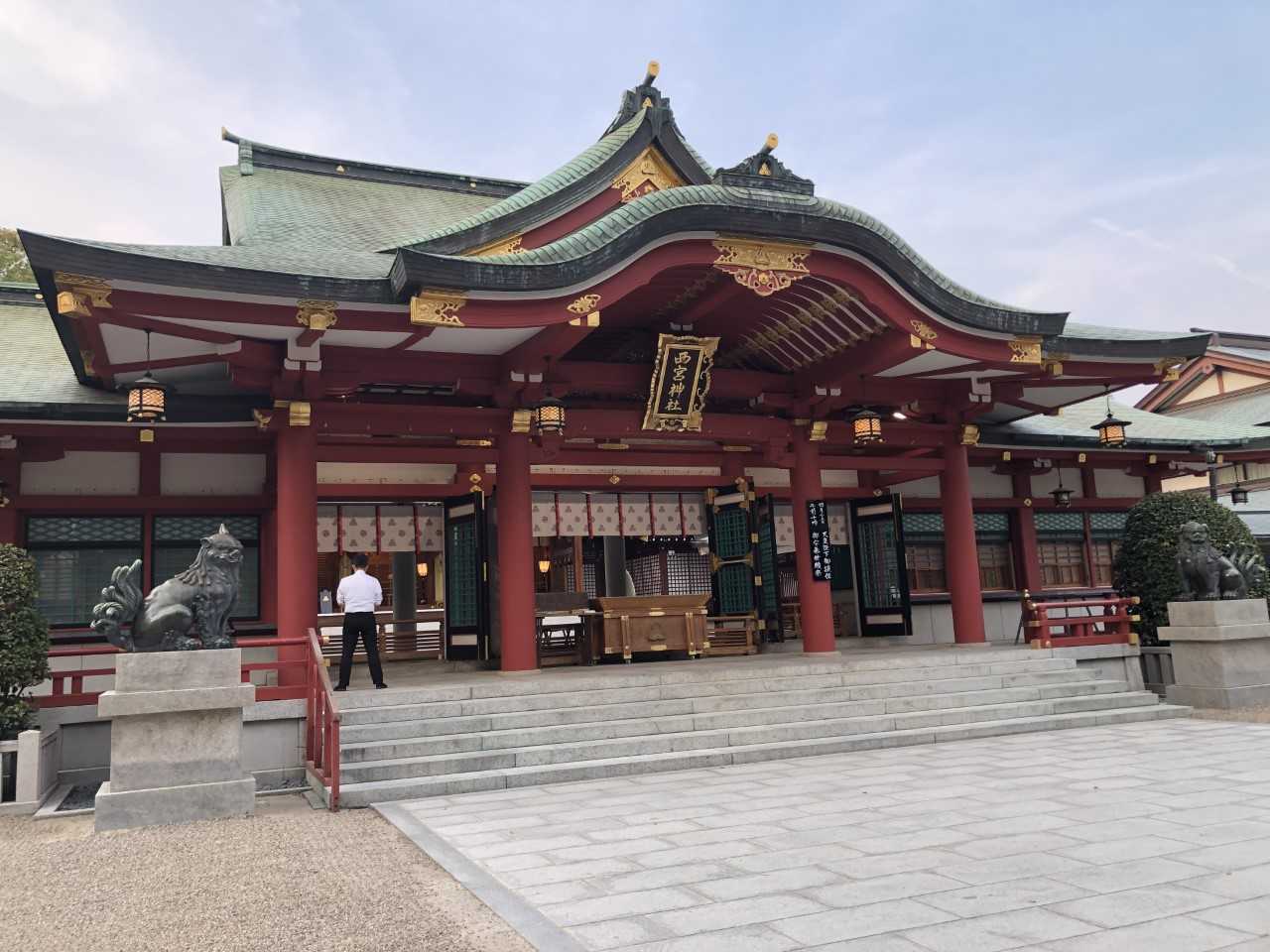 The general meeting Gerard and I attended was a budget meeting. To date I’ve had precisely eight hours of formal Japanese instruction. I cannot imagine how many years of Japanese I would need to understand even half of what went on in the meeting.

We were given many sheets of information. What I studied was the picture of the portable shrine for Ebisu: 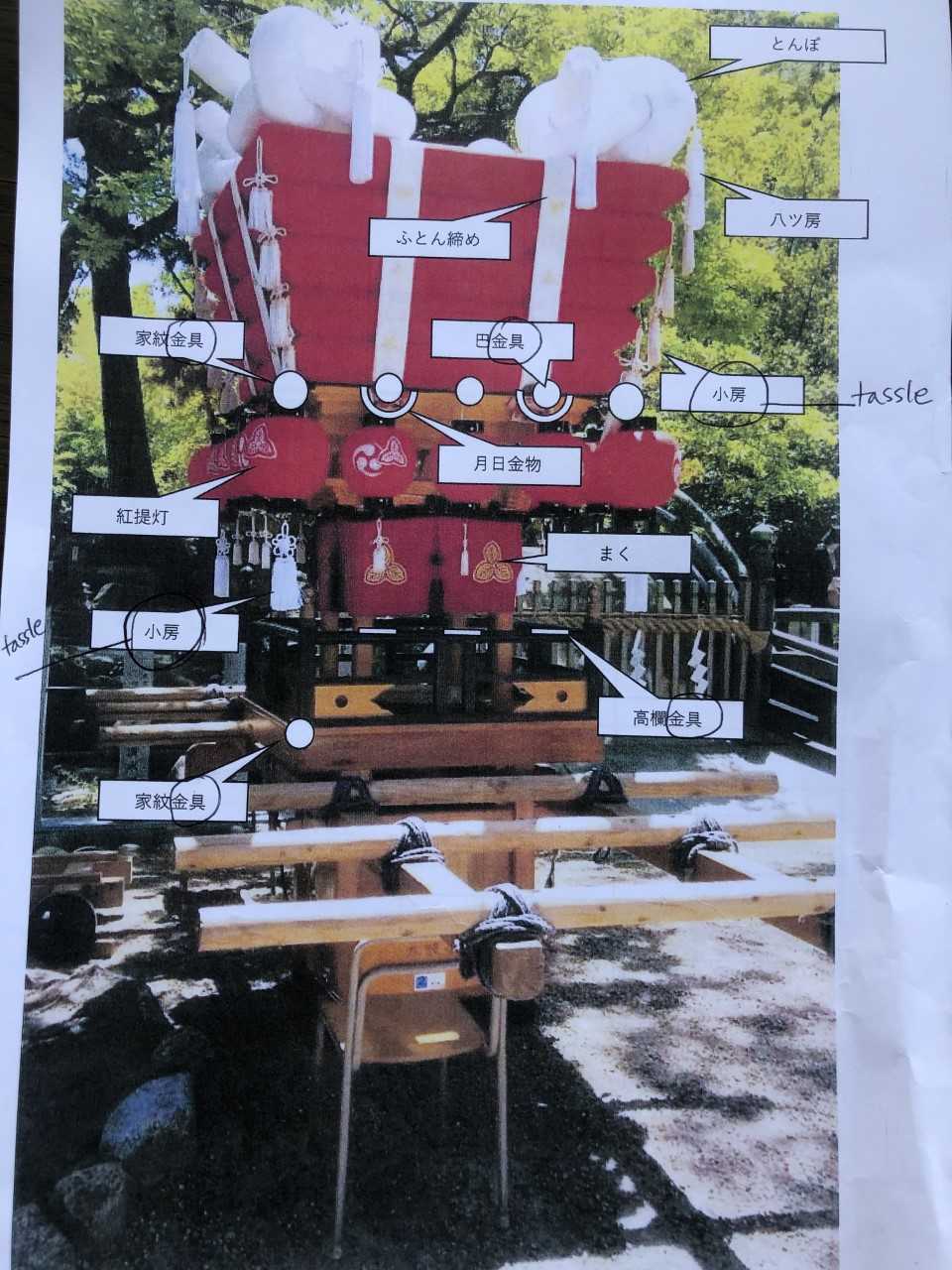 After an hour of contemplation I was able to identify two of the same kanji, which I have circled and which I decided mean ‘tassle.’ I have also circled four other kanji that are the same – but darned if I know what they mean. Something to do with the portable shrine?

And here’s the budget for it: 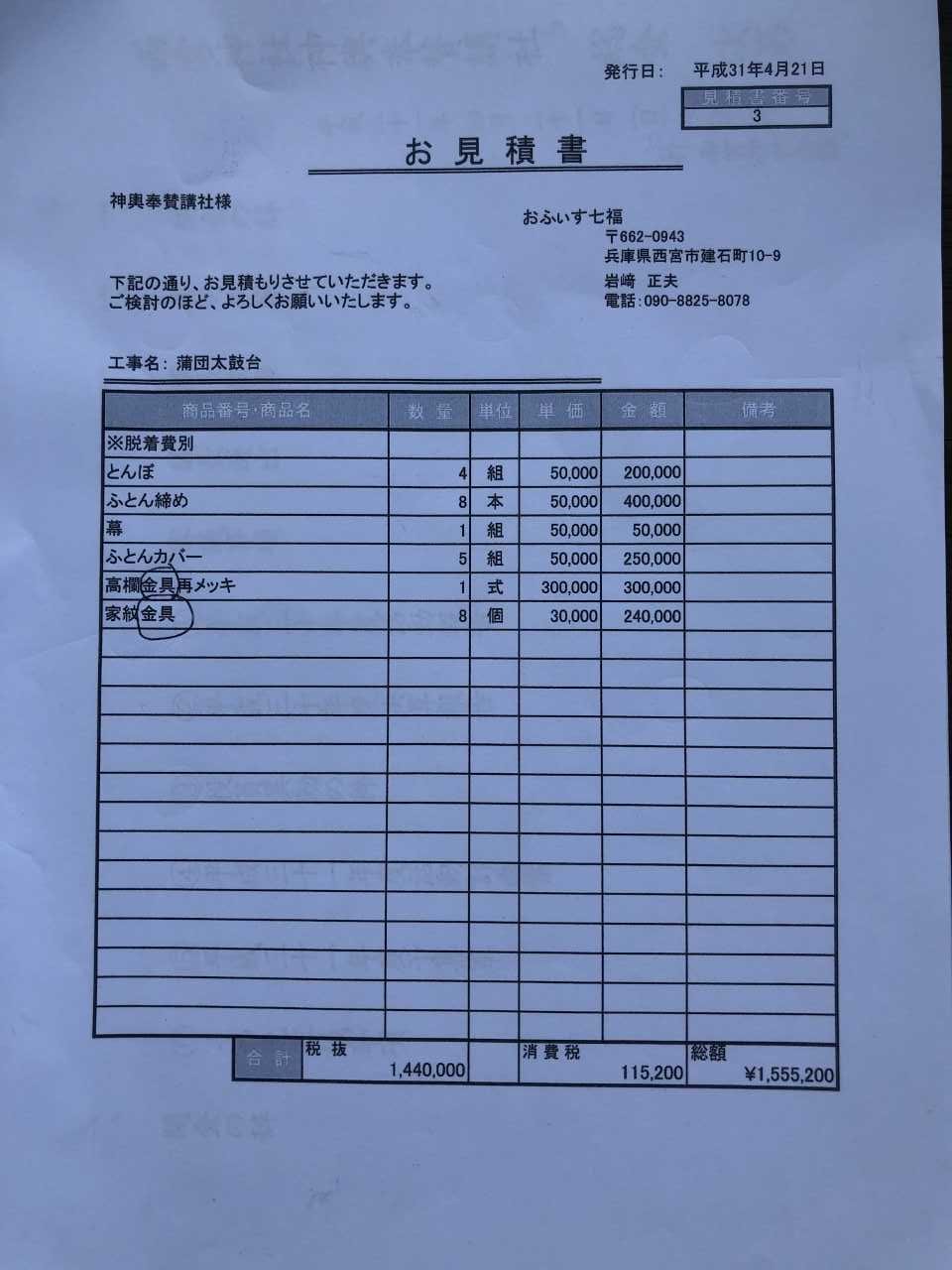 I have circled two kanji on the budget that match the four kanji I circled on the picture. That is the extent of my insight.

What’s this portable shrine all about? The best way to answer the question is to have you watch this video:

My son, Gerard, is in the line of men at the front, carrying the shrine. He’s wearing glasses. You can just catch a glimpse of him.

Final thought on Christianity v. Shintoism (acknowledging that no one asked me to compare them): When I studied Vietnamese in Vietnam in 2012, I was struck that their gods and literary heroes live until ripe old ages. And then there’s Buddha who, for his part, lived a normal life-span. Now in Japan, I observe the same thing. There is no sense that “only the good die young,” like Jesus on the cross, Achilles in the Trojan War or almost any heroine in a 19th-century opera.

The following sentiment is not particularly Easter-like. But here in Japan, at Nishinomiya Shrine, I say: Live your life. Laugh it up.