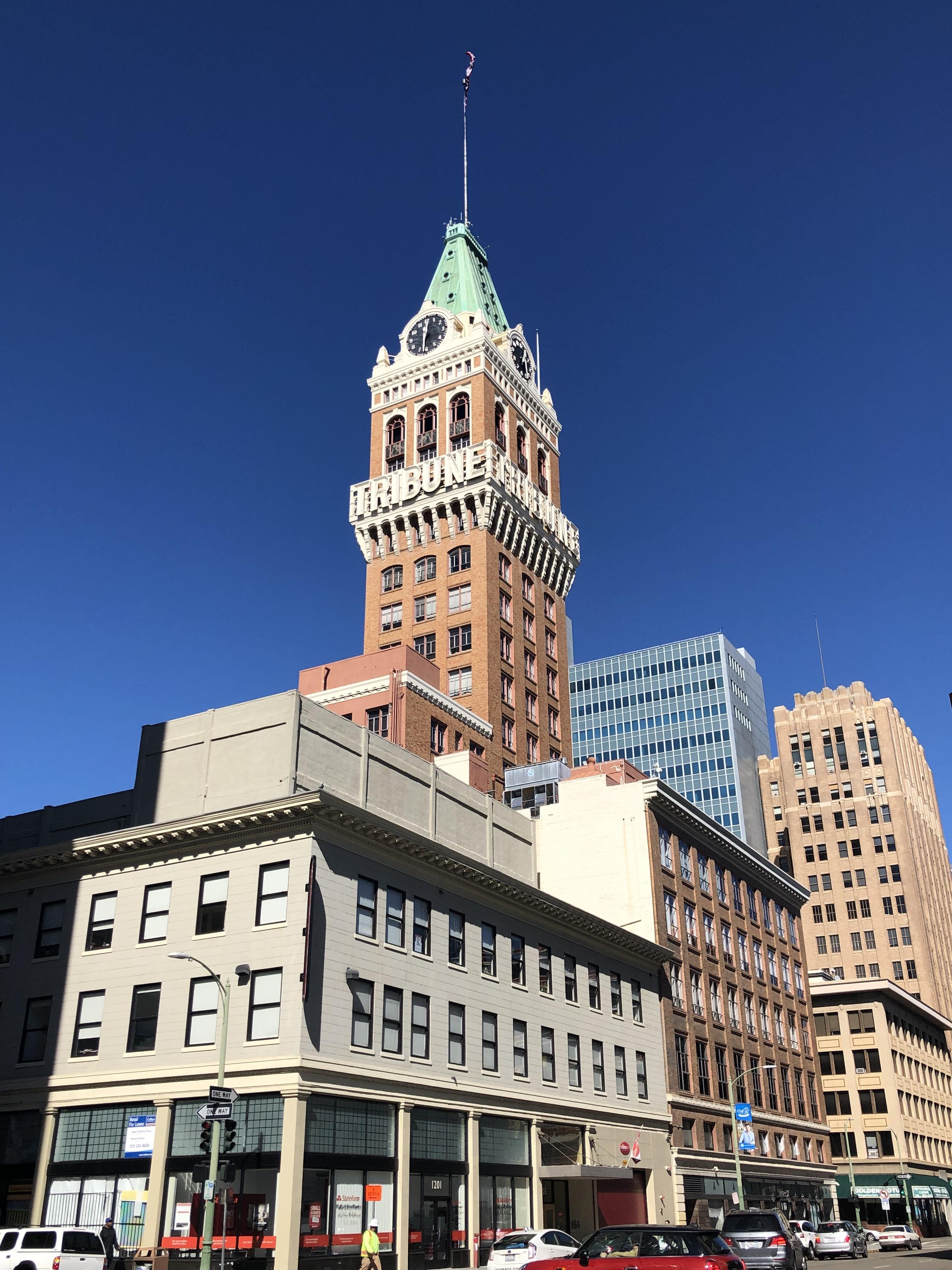 Oakland, California is a big eye-opener. Whatever Oakland’s reputation has been in the past, I’m a witness to the fact that today it’s the Bay Area’s Brooklyn. It’s prosperous, dynamic, young, up-and-coming. I chose for the title image the iconic Tribune building in downtown.

Downtown is a collection of impressive buildings. In addition to the Tribune tower, there’s City Hall: 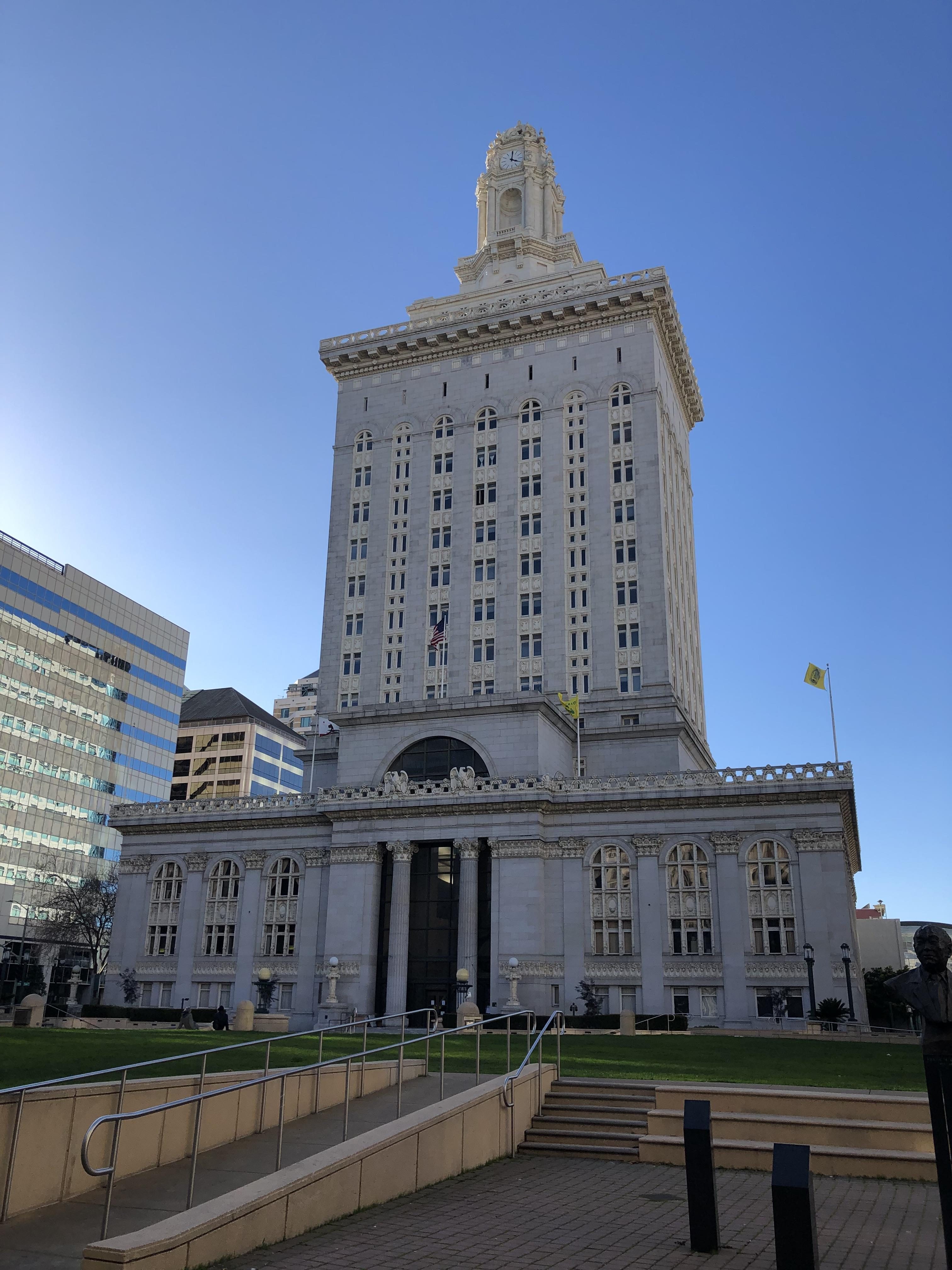 There’s not just one flat-iron building … 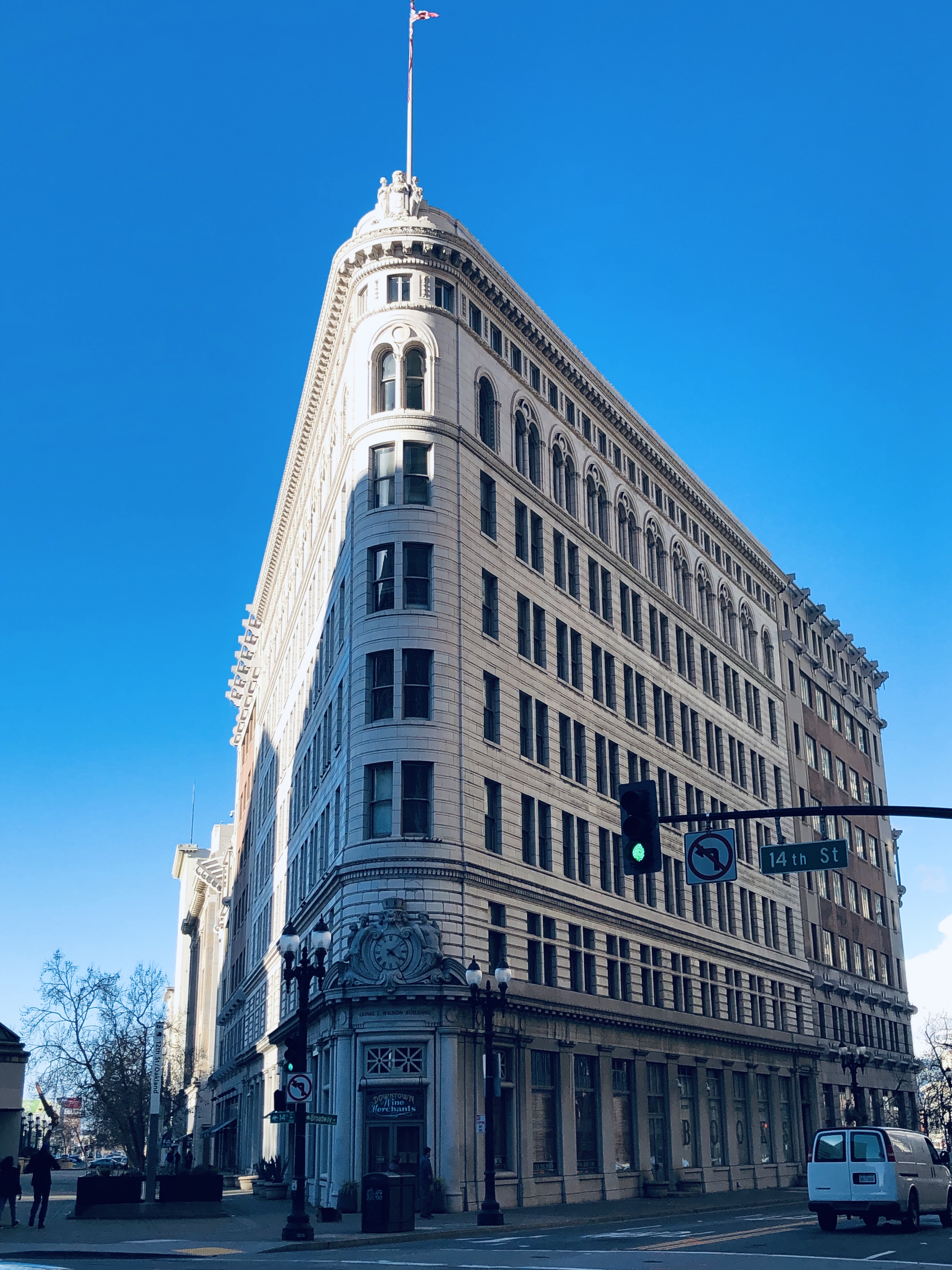 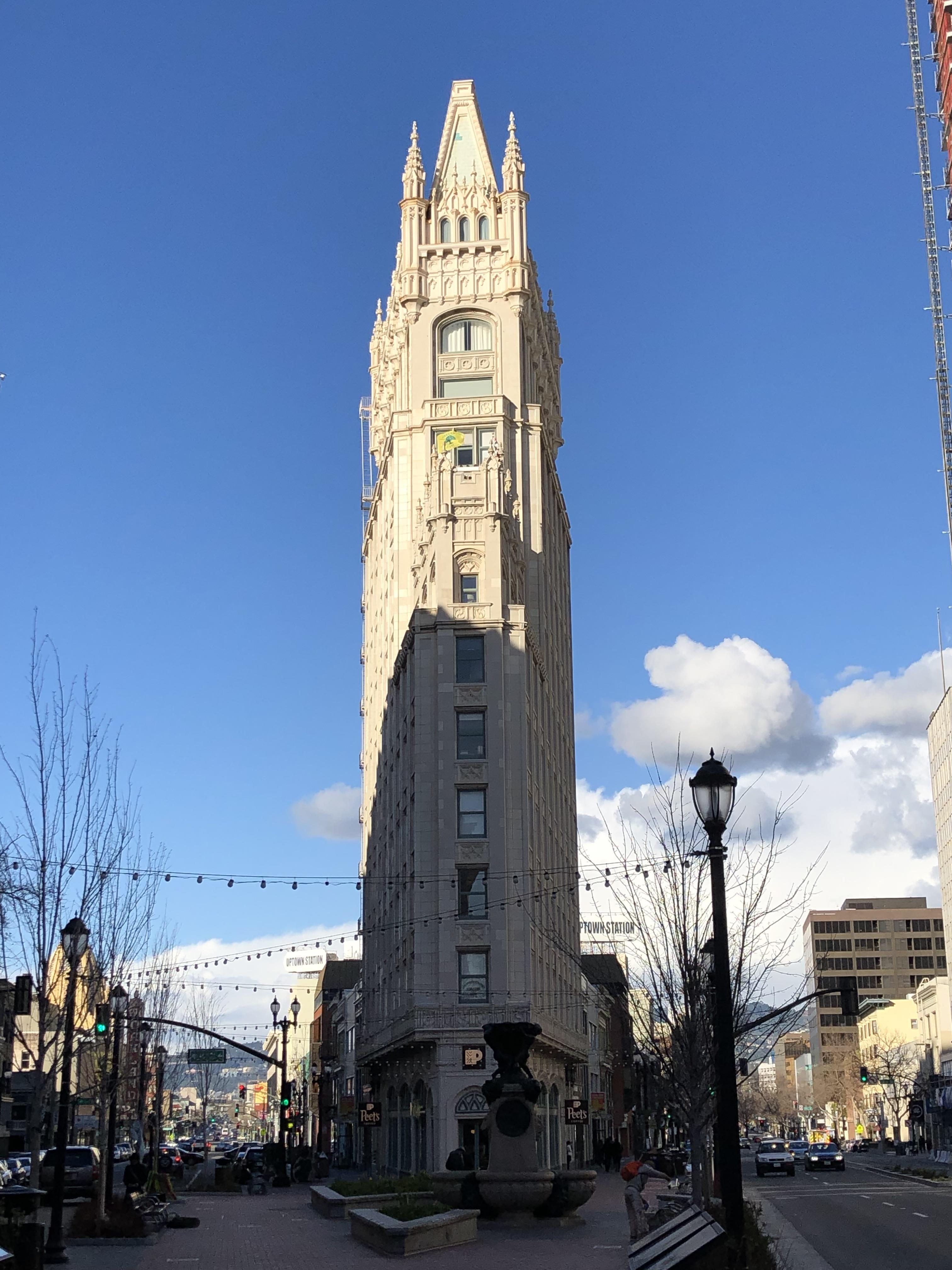 And now I have flat-out flat-iron envy. Durham NC had a flat-iron building at Five Points until there was a fire. Although the Durham Historic Society argued the building could be restored, the Powers That Be tore it down. Now it’s a brick walkway with a statue and a few park benches. Sigh ….

A modern building complex right next to City Hall: 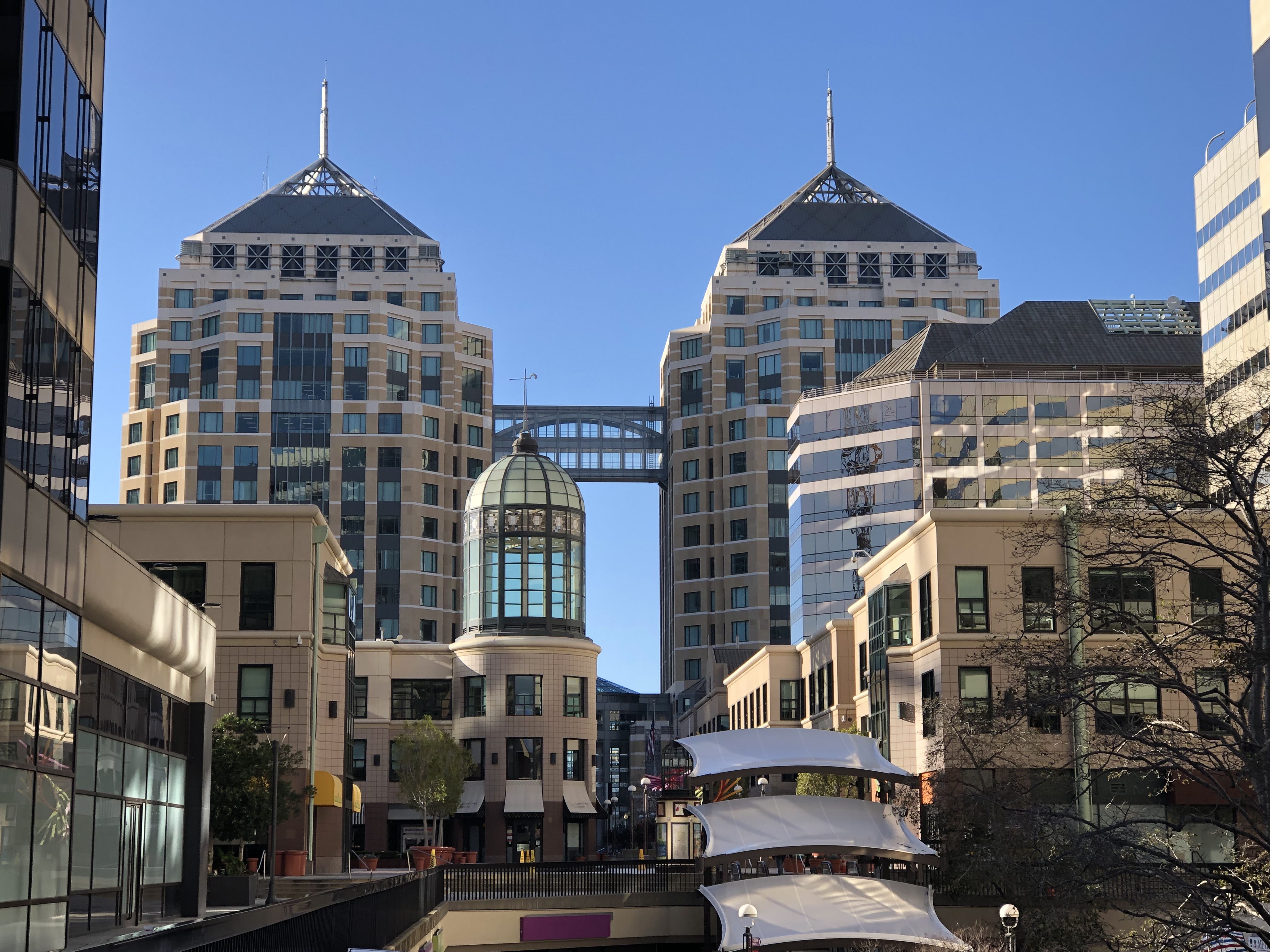 And a future complex. It’s right outside the window on my hotel on Broadway, less than two blocks from City Hall: 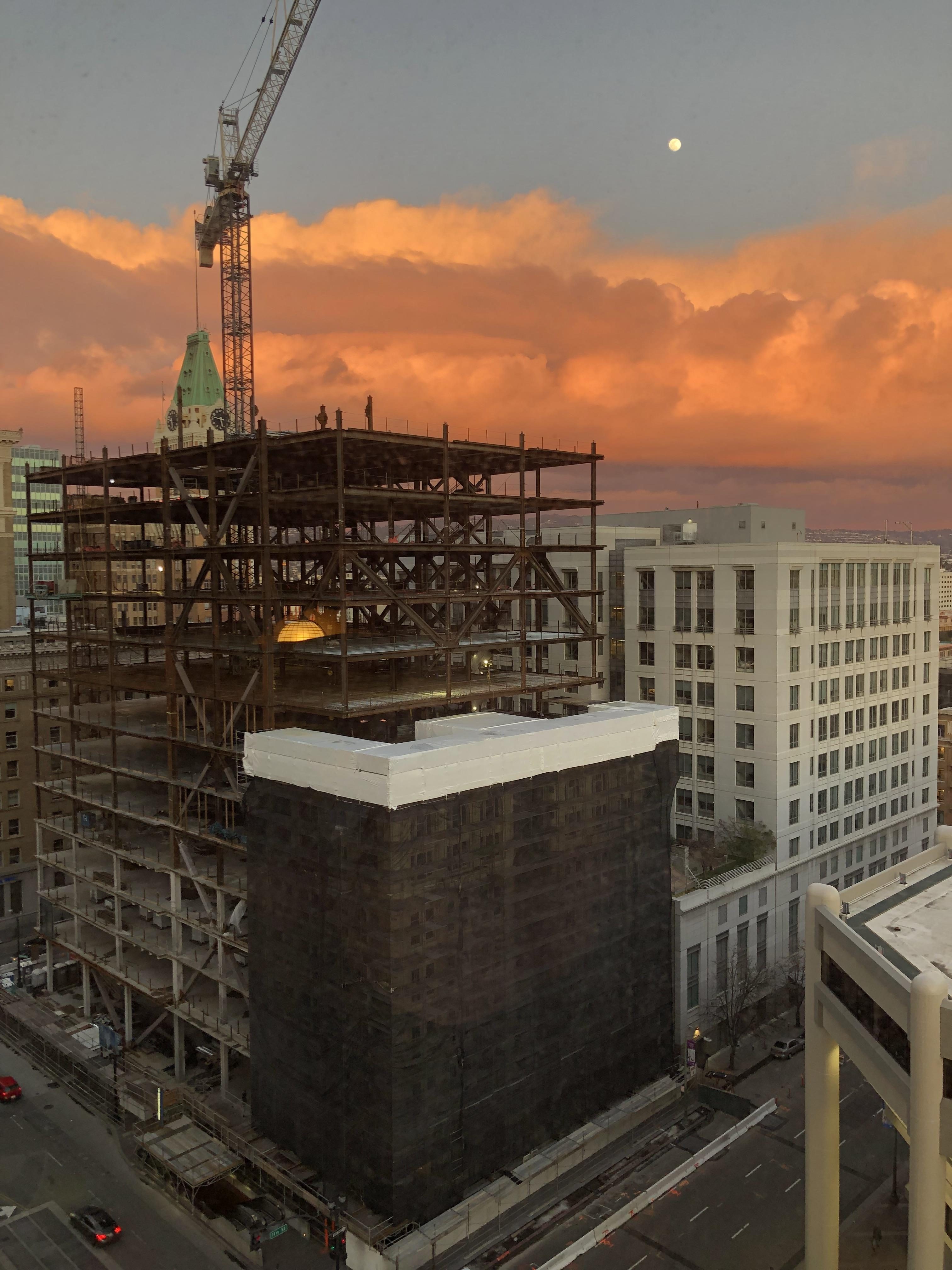 Another view from my hotel, this one with Old Oakland in the foreground and San Francisco in the far background: 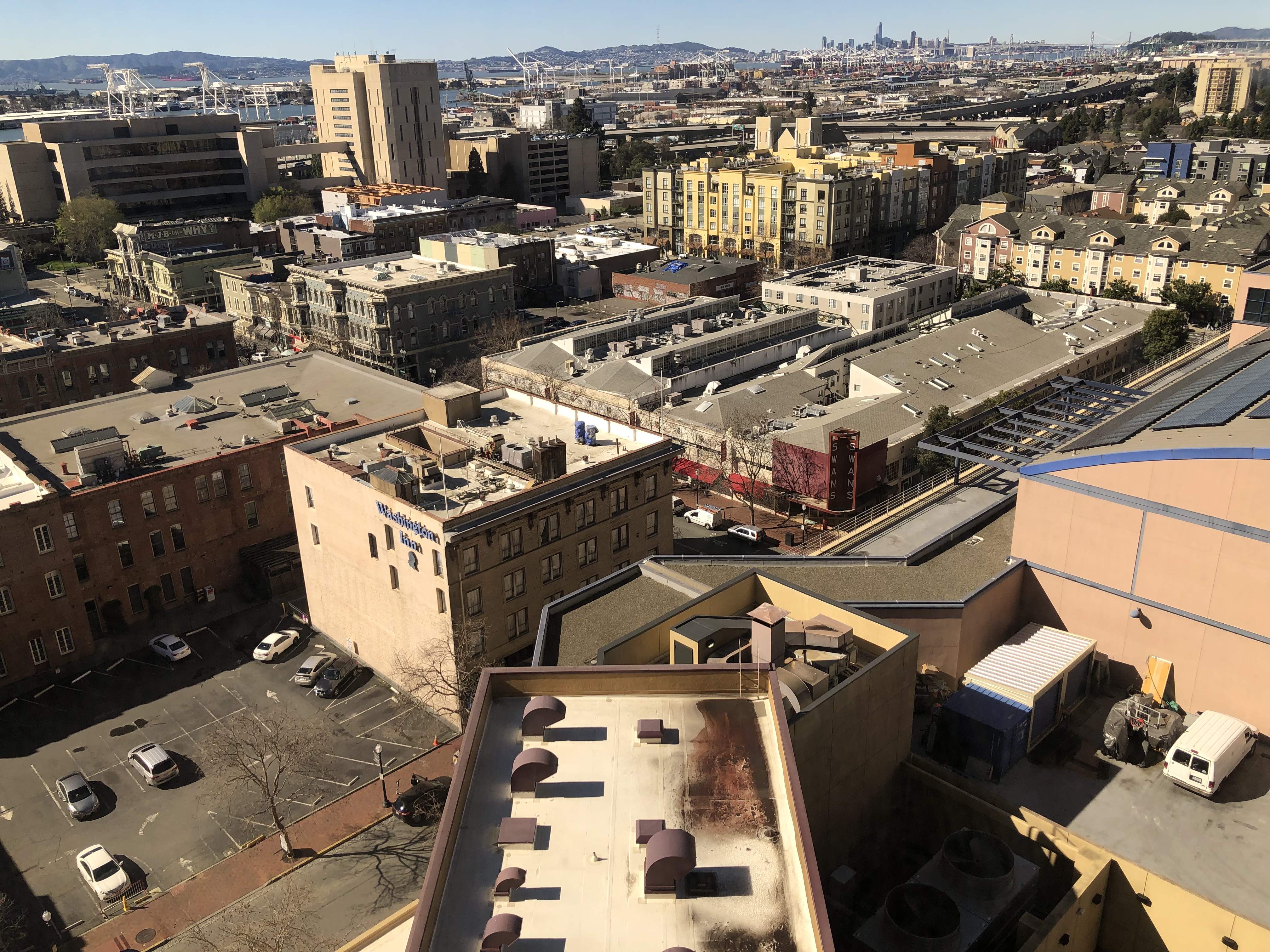 An impressive number of roof tops!

Swan’s, which is visible just off-center in the image above, is apparently an Oakland institution: bustling market and restaurant. I was there on President’s Day and so it was closed. 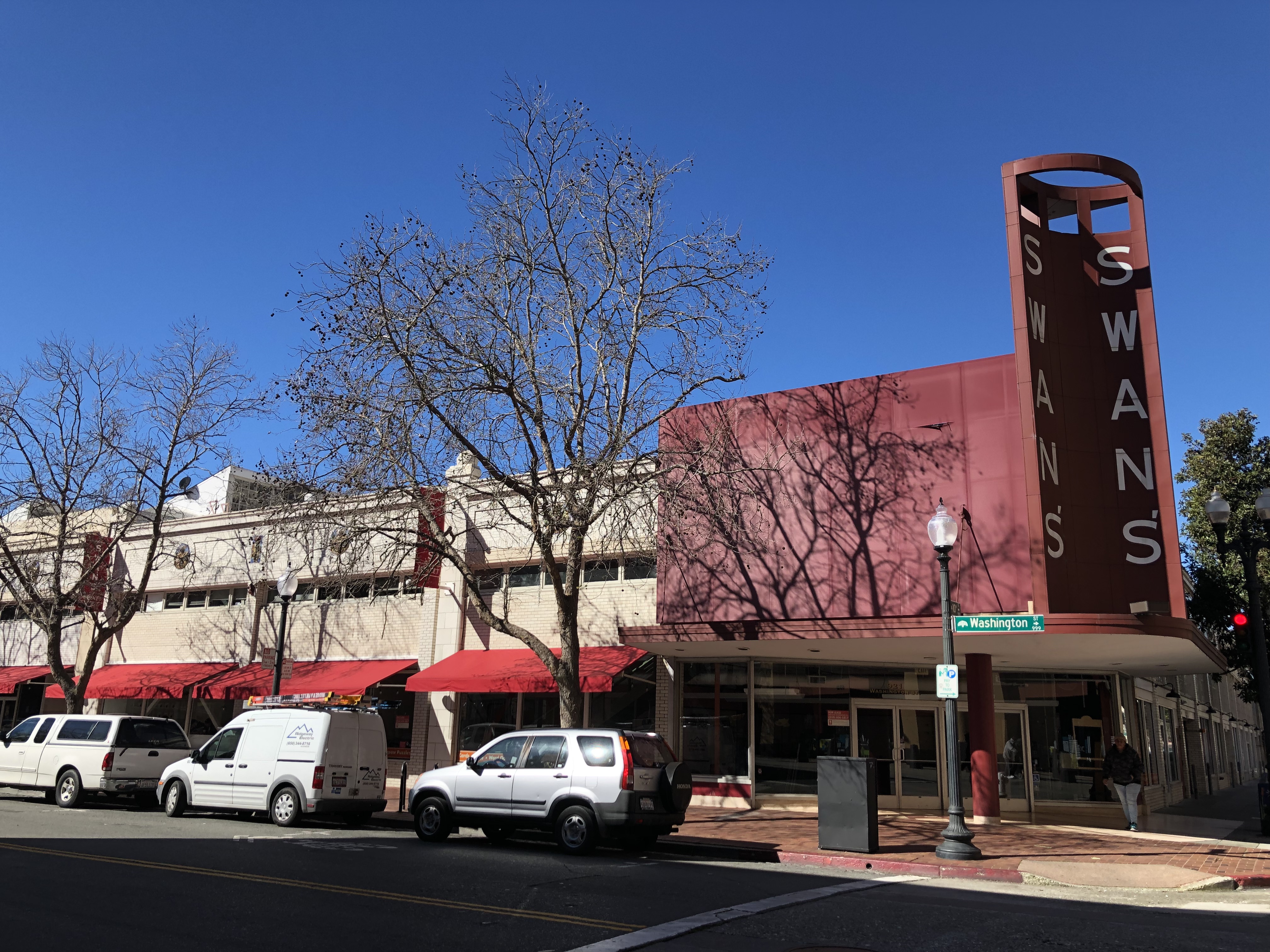 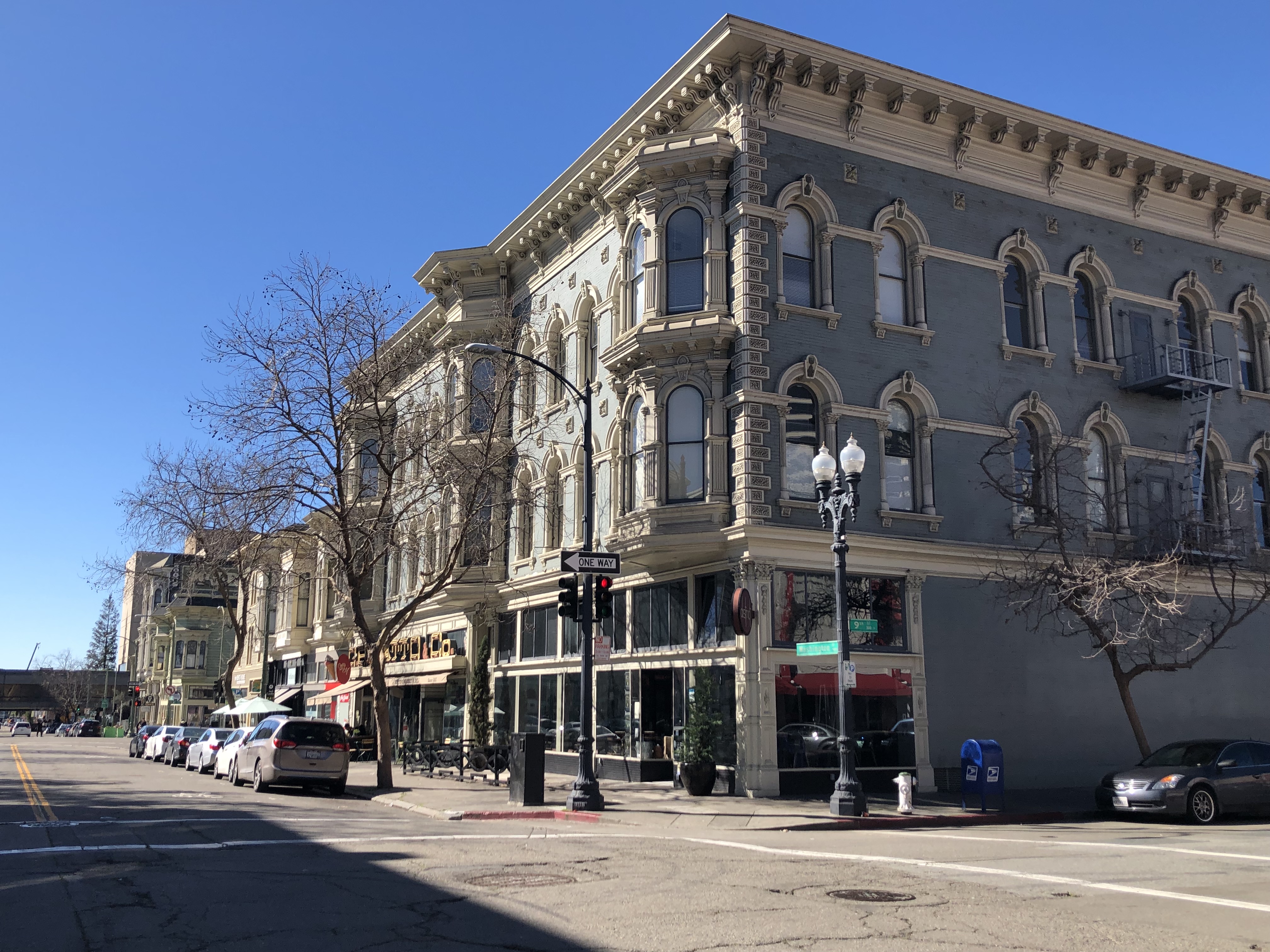 On another corner you have: 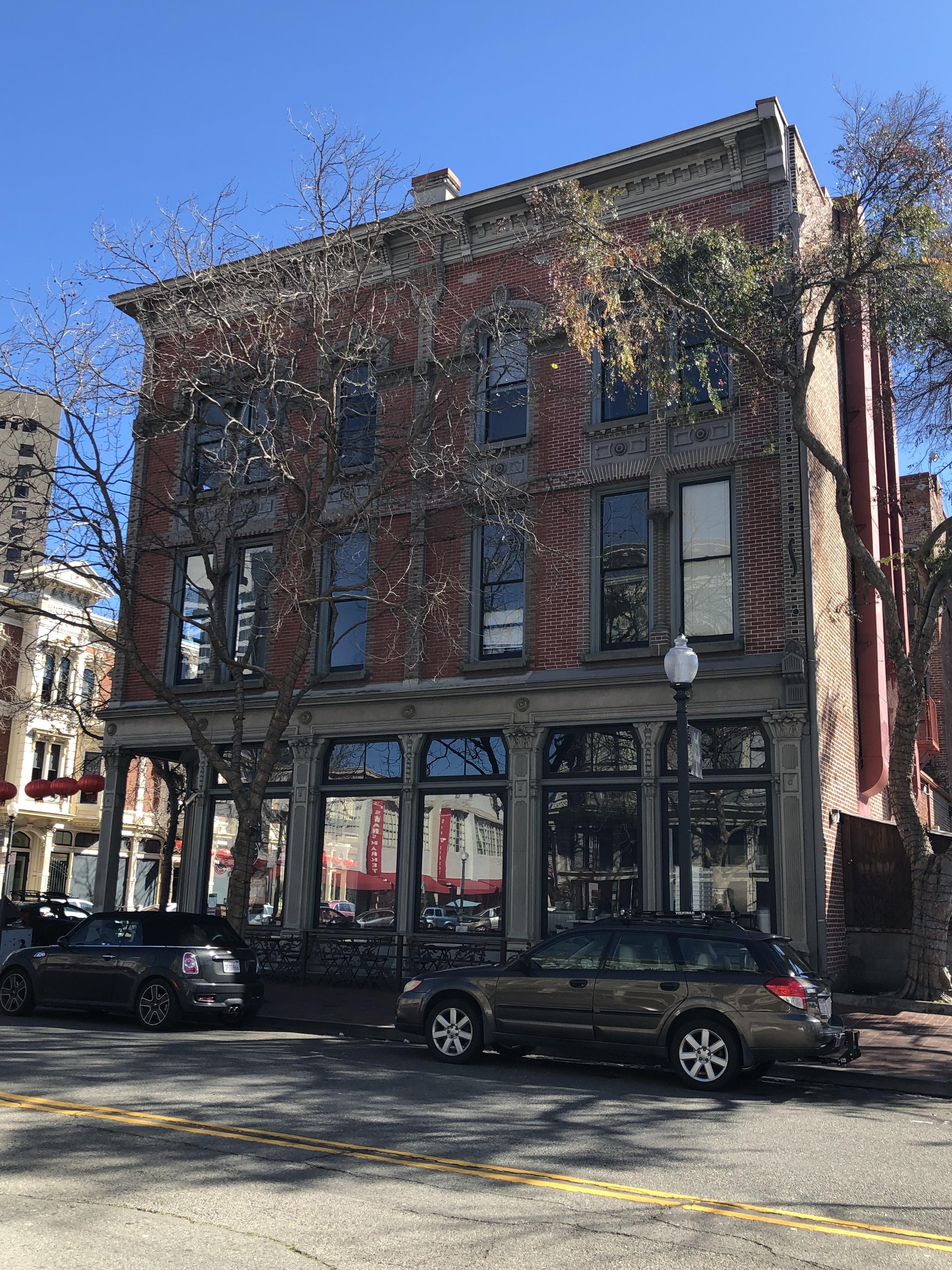 Right next to Old Oakland and on the other side of Broadway is China Town. 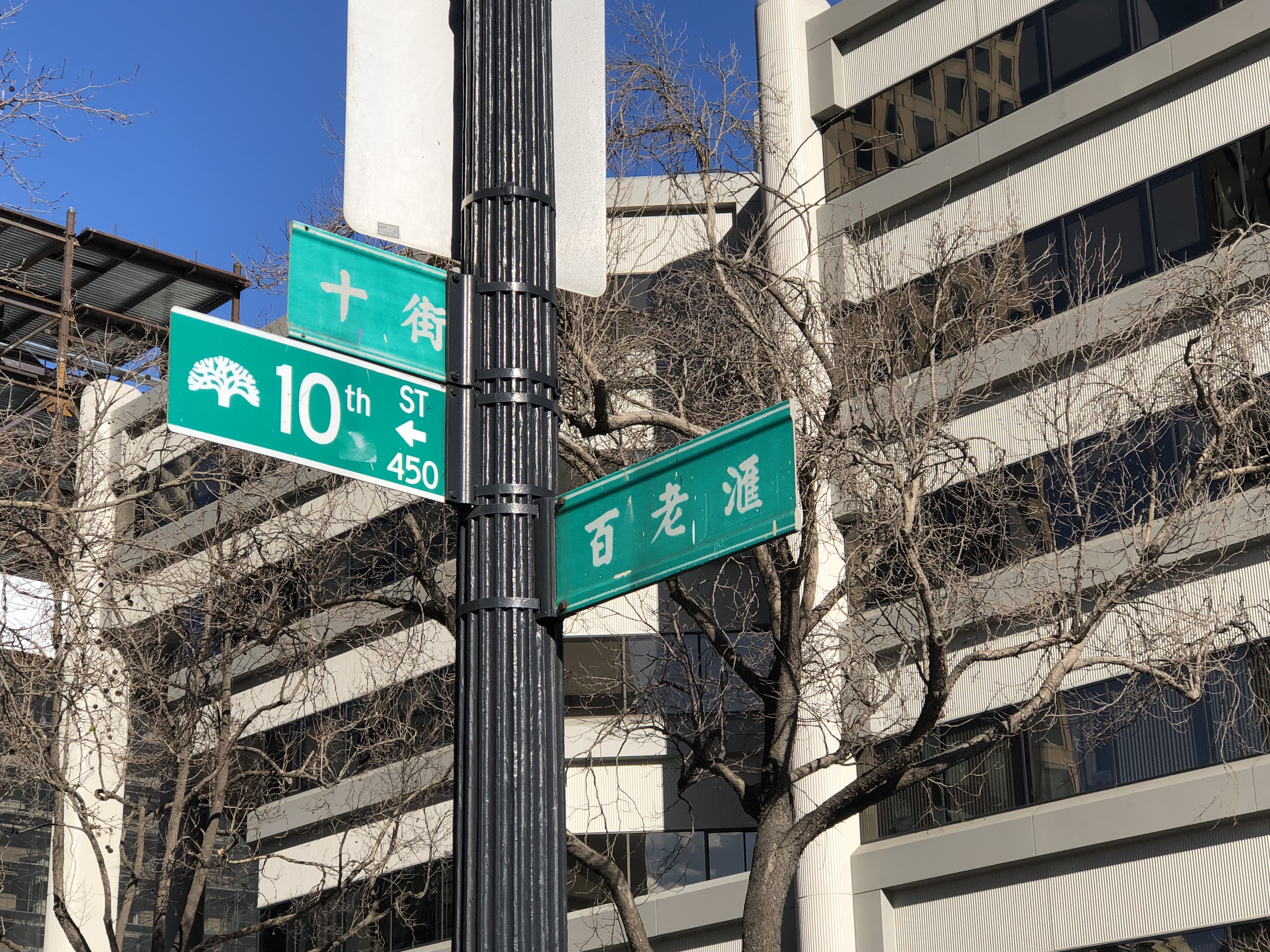 Two things to say about this area. First, it’s not at all touristy. It is a functioning neighborhood. I passed some lively markets but I thought it was intrusive to take a picture so I just stuck to the buildings. 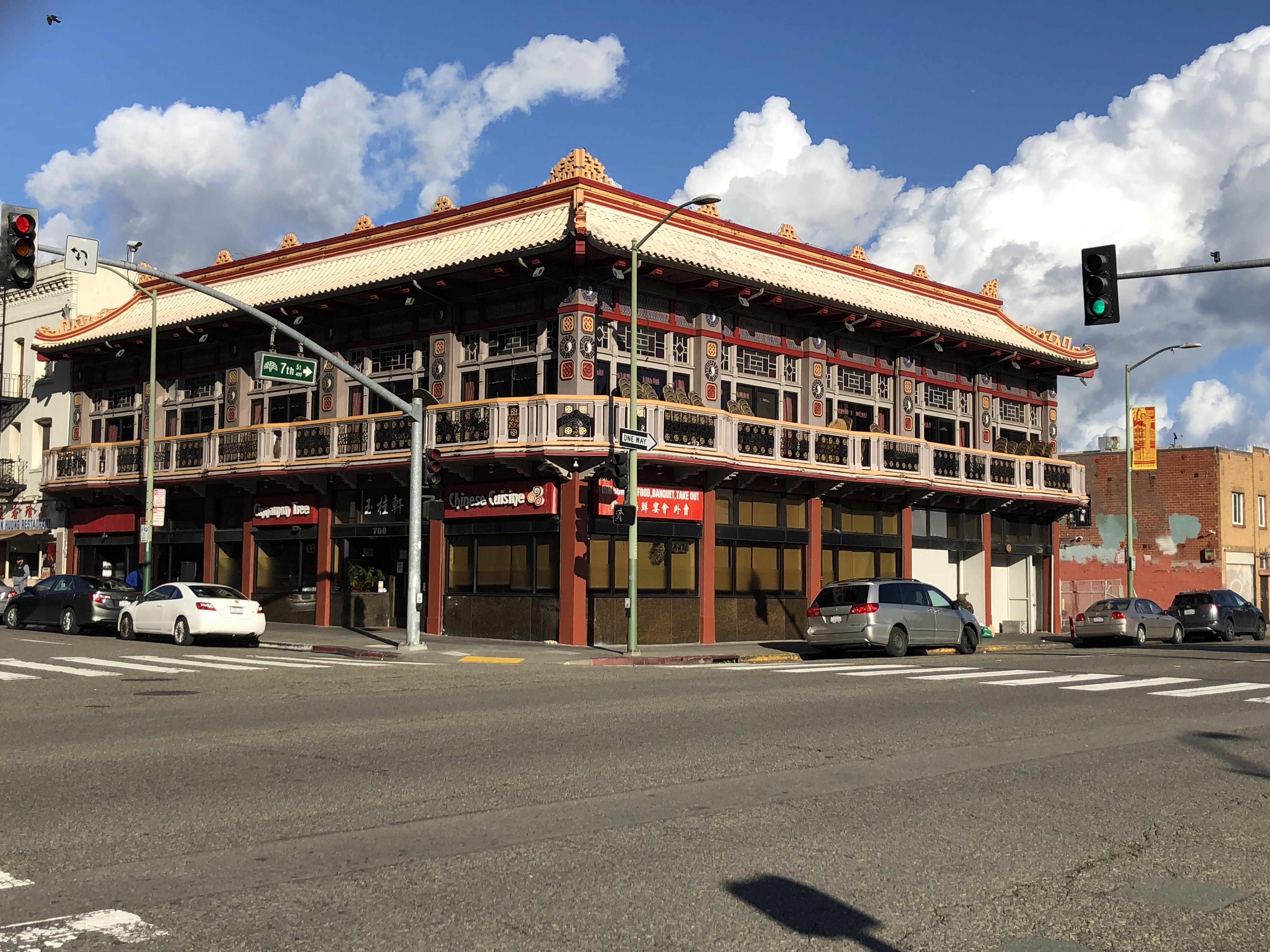 Here’s another, below, but mostly what I’m capturing here is the crosswalk. The traffic lights are set up so that pedestrians can cross diagonally: 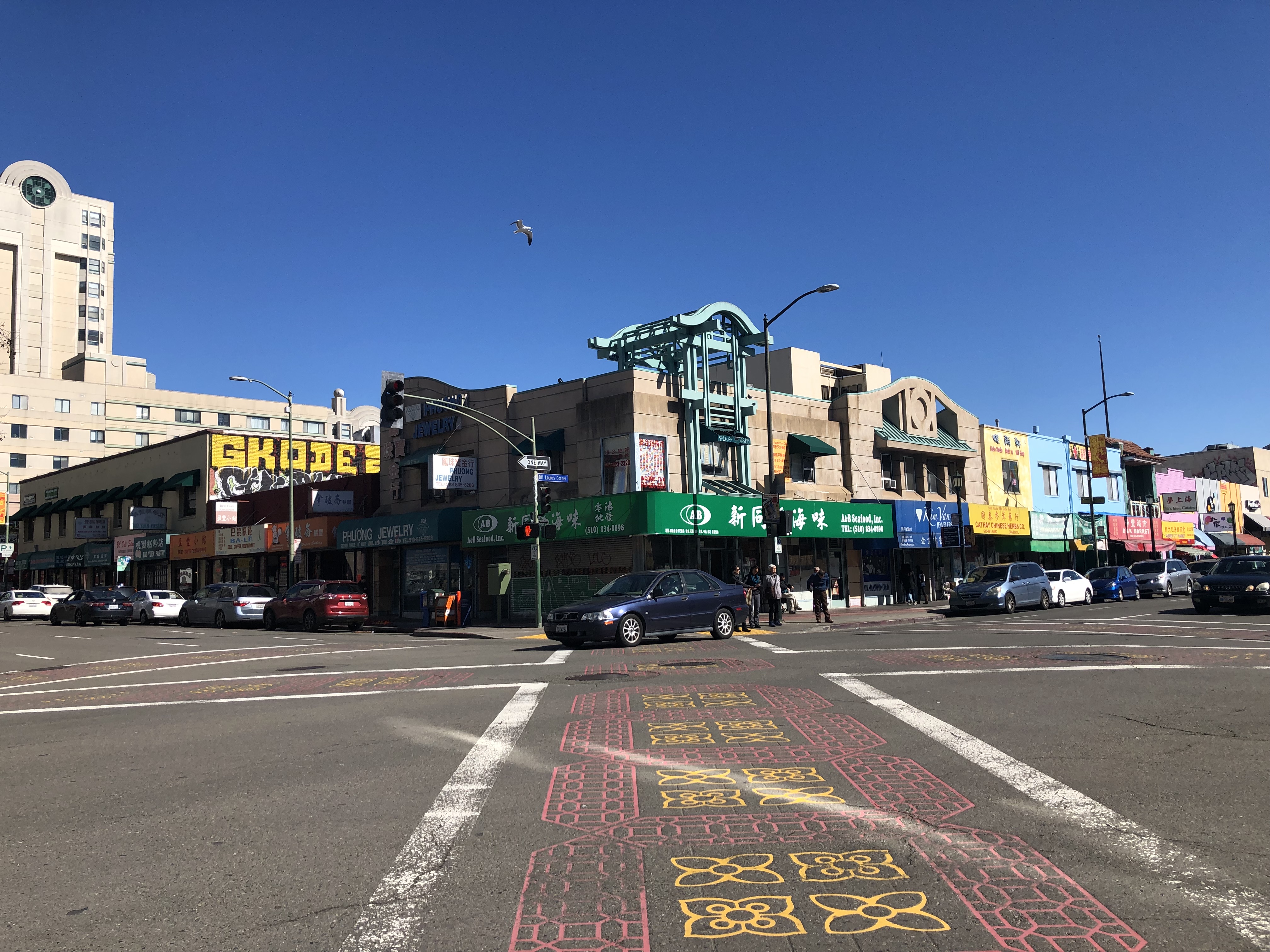 Second, the term China Town is a misnomer. Just like the Clement Street area in San Francisco is pan Asian, so is this area of Oakland.

Here’s a shop whose sign I could actually (partially) read in Vietnamese! 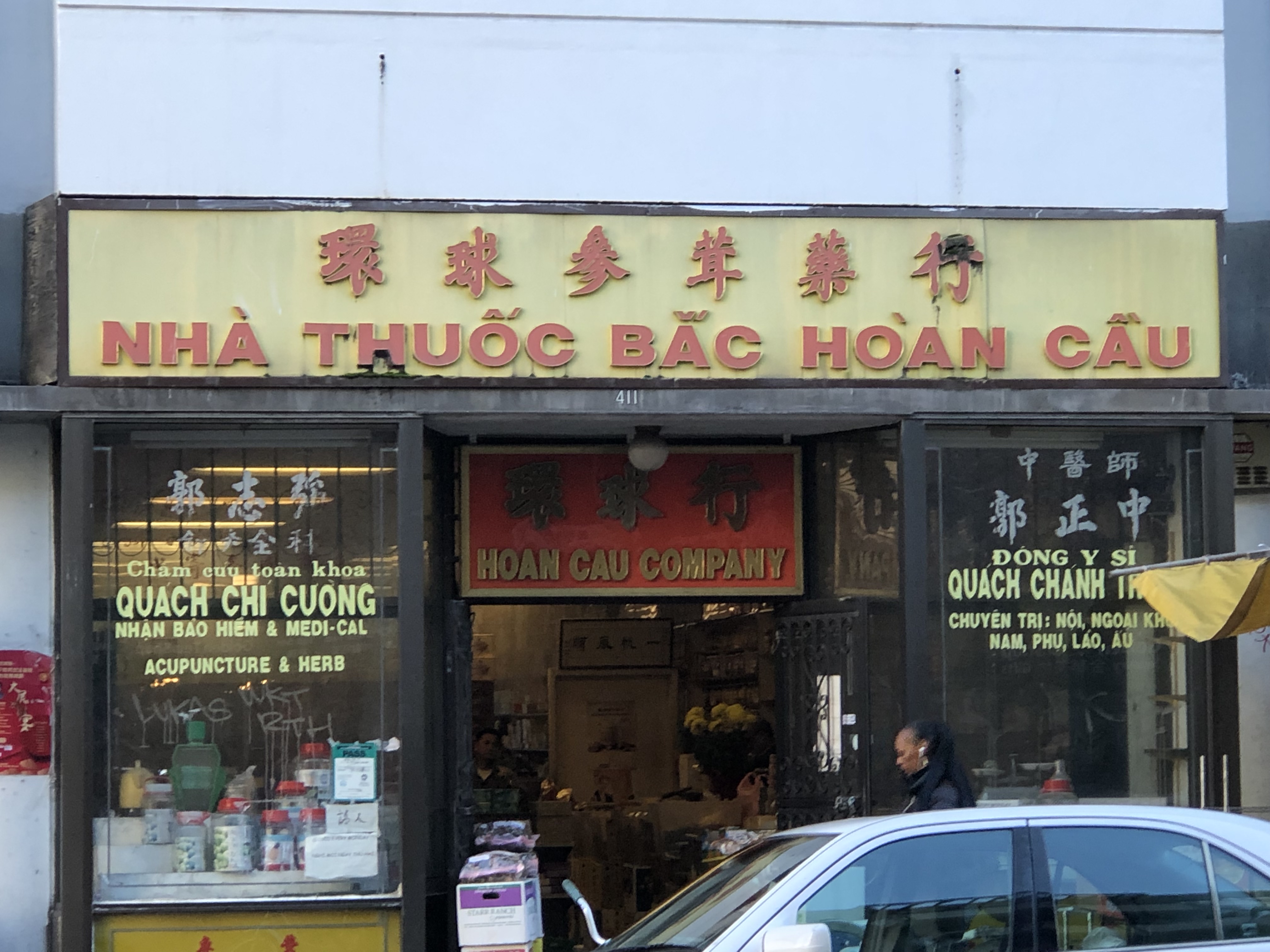 “Find Your Cool” is Durham’s motto these days (and an improvement on the former “City of Medicine”). “Cool” is also a way to describe the Lake Merritt Grand Avenue neighborhood of Adam’s Point.

The Grand Lake Theater sign presides over the neighborhood. 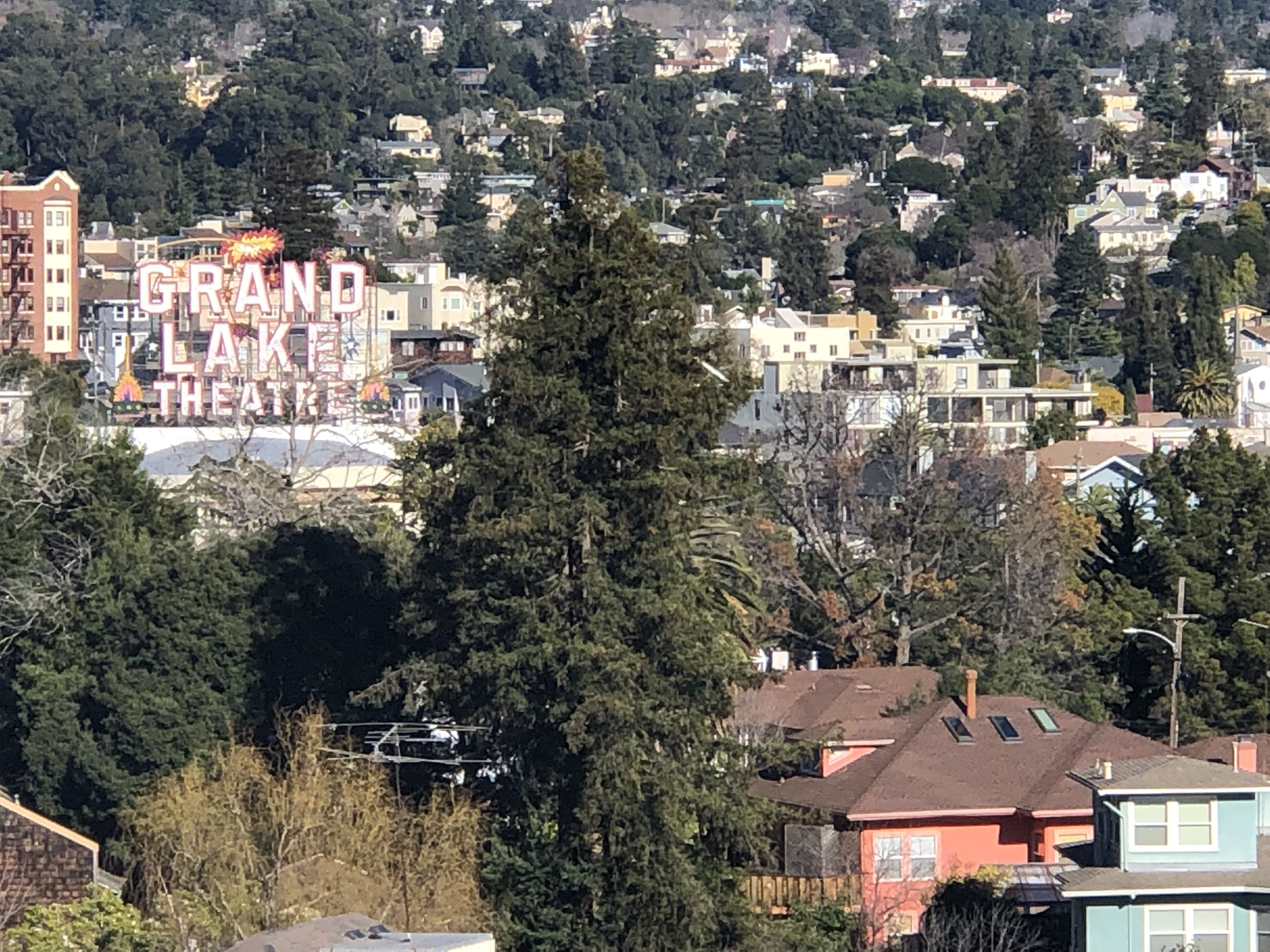 Then there’s Grand Avenue full of bars and restaurants and so crowded on the day we were there (President’s Day) that it was hard to get a table. 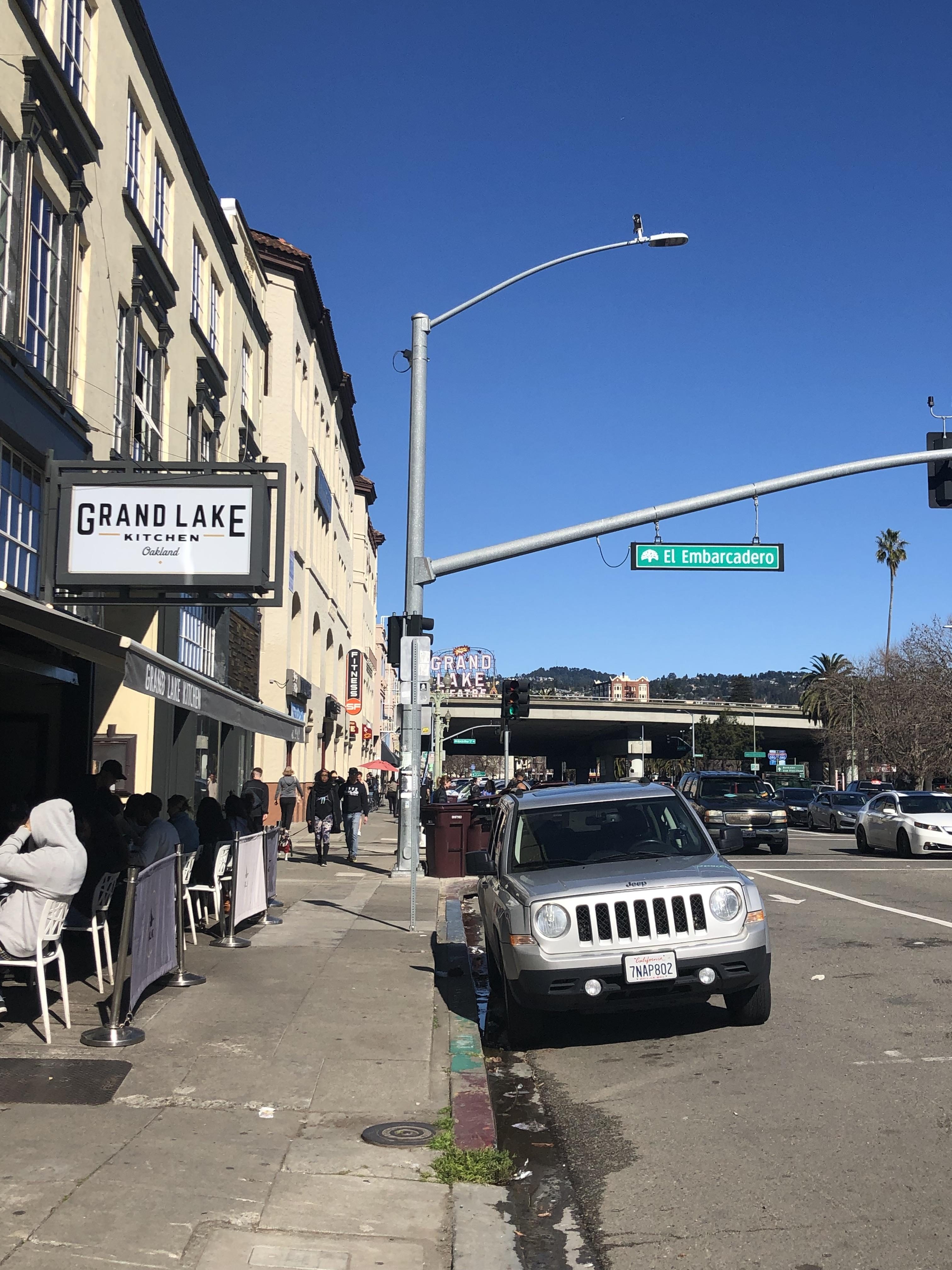 Note the Grand Lake Theater sign in the background

Merritt Lake is the largest urban lake in the country, that is, a lake completely surrounded by an urb. It has a three-mile heart-shaped shoreline. 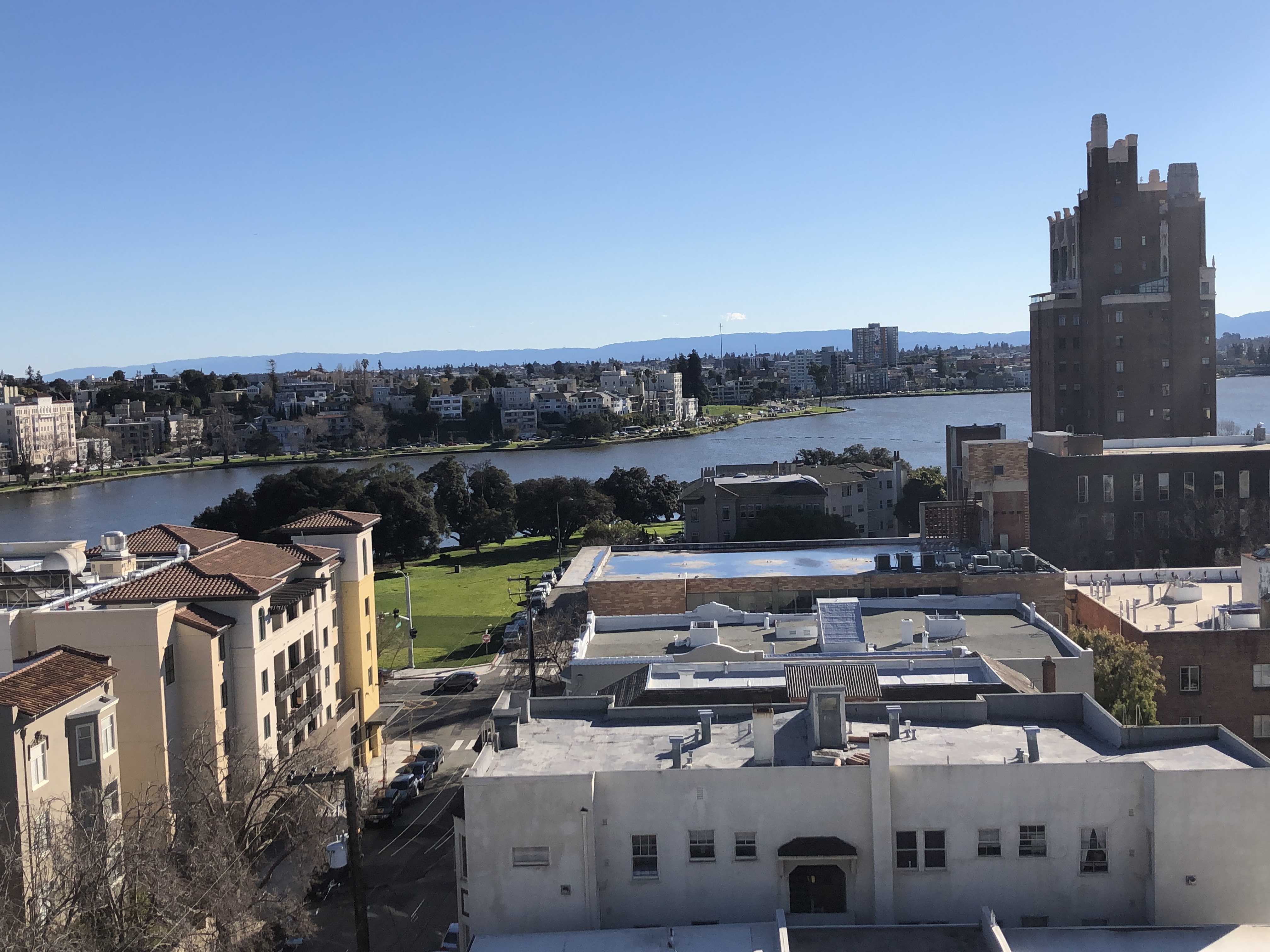 I took this shot while standing in the apartment of Imani and Anthony. Imani is the daughter of Durham friends Maryska and Jeff.

Oakland has architecture. Speaking of Imani, she gave me the run-down on the building, below, whose back you see in the middle-top right of the picture, above. 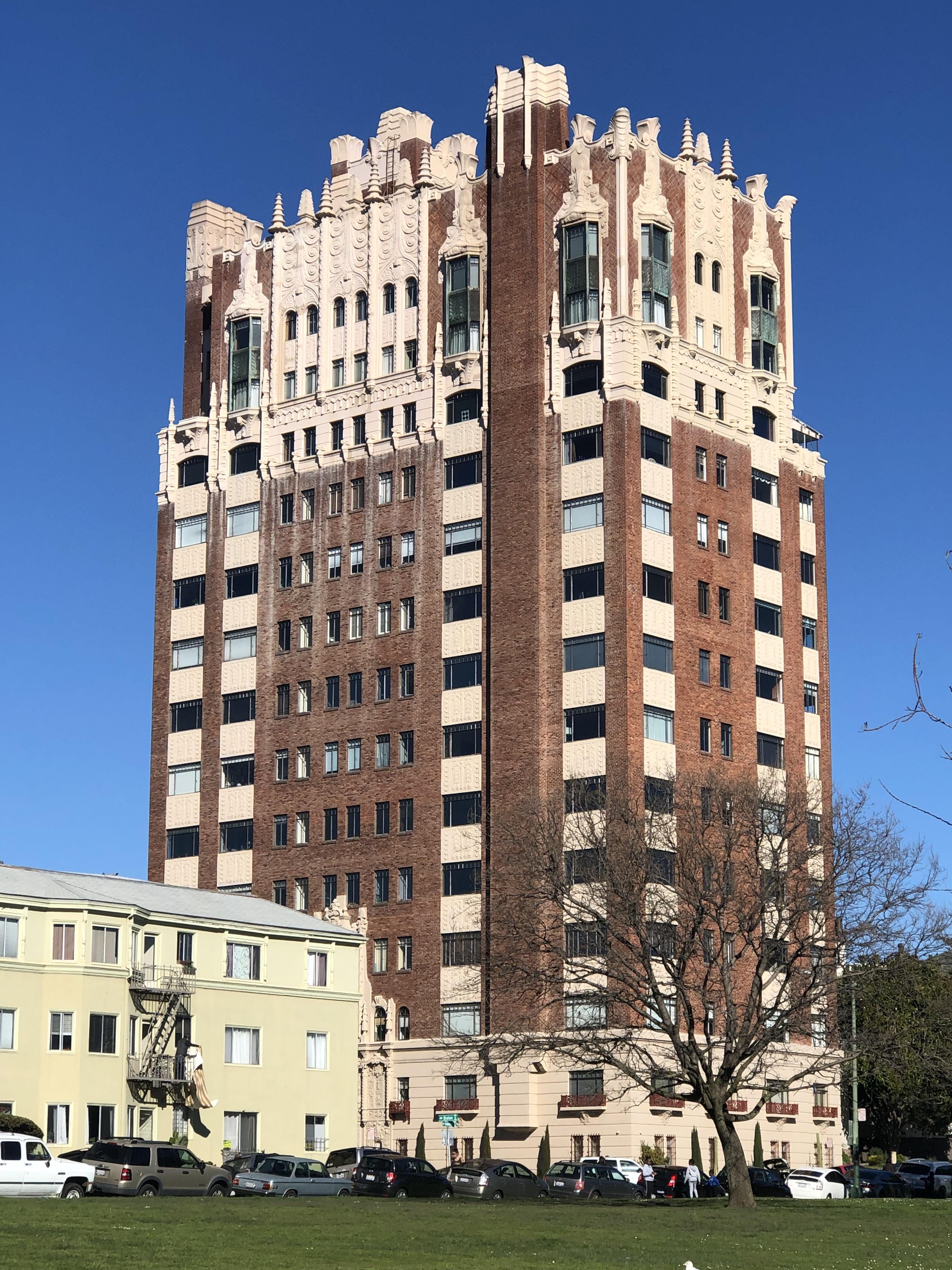 It’s an Art Deco … masterpiece? It’s the Bellevue-Staten apartment building, built in 1929 by architect Herman Carl Baumann. It’s pretty cool and has been known since the mid-80s as the Ghostbusters Building. 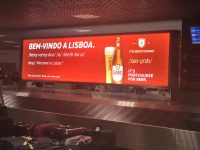