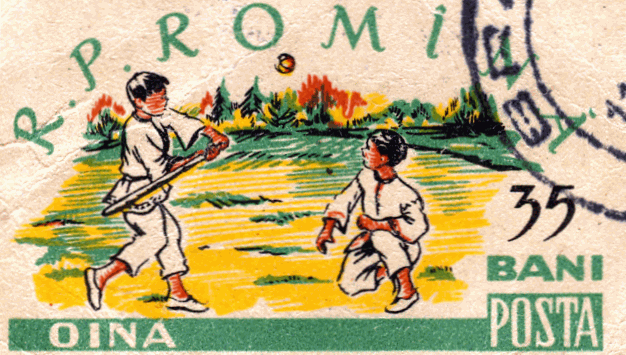 Oina is the traditional national sport of Romania. I’d heard of it but I didn’t understand it until last week, when my Romanian teacher gave me a reading about it. Then all sorts of things started clicking. The title image of the vintage Romanian postage stamp is a big huge clue.

Oina: What Is It?

Romanians have a traditional orientation toward sheep – anything and everything to do with sheep. It turns out, the game oina has its origins with shepherds. It is likely 2000 – 2500 years old.

A oina is the verb that means the shepherds are taking their flocks down the mountain to greener pastures. This occurs in autumn. The game may have its origins in a competition among the shepherds. The linguistic traces are strong.

Second, the game is played with a bâtă ‘ a shepherd’s crook,’ which is straight like a bat. You use the bat to hit a ball pitched by the opposing team.

Third, when the players take the field, it goes by the name intrare la strungă ‘entering the strungă.’ What’s a strungă? The place where you milk the (female) sheep.

Fourth, the fielding team are the echipa la păscare ‘the grazing team.’

Here’s a representation of the field provided by the Romanian Federation of Oina. 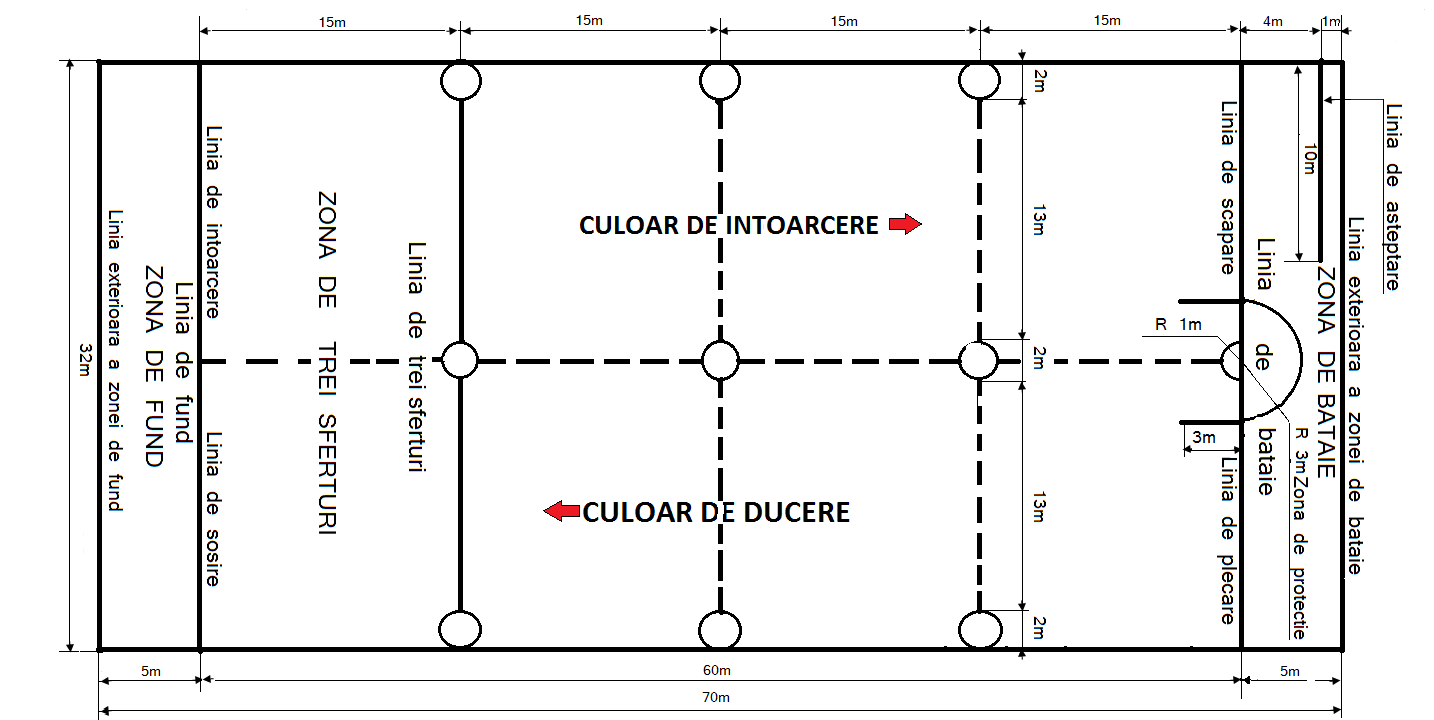 Do not ask me the rules. I have no idea. But here’s how the players look on the field. 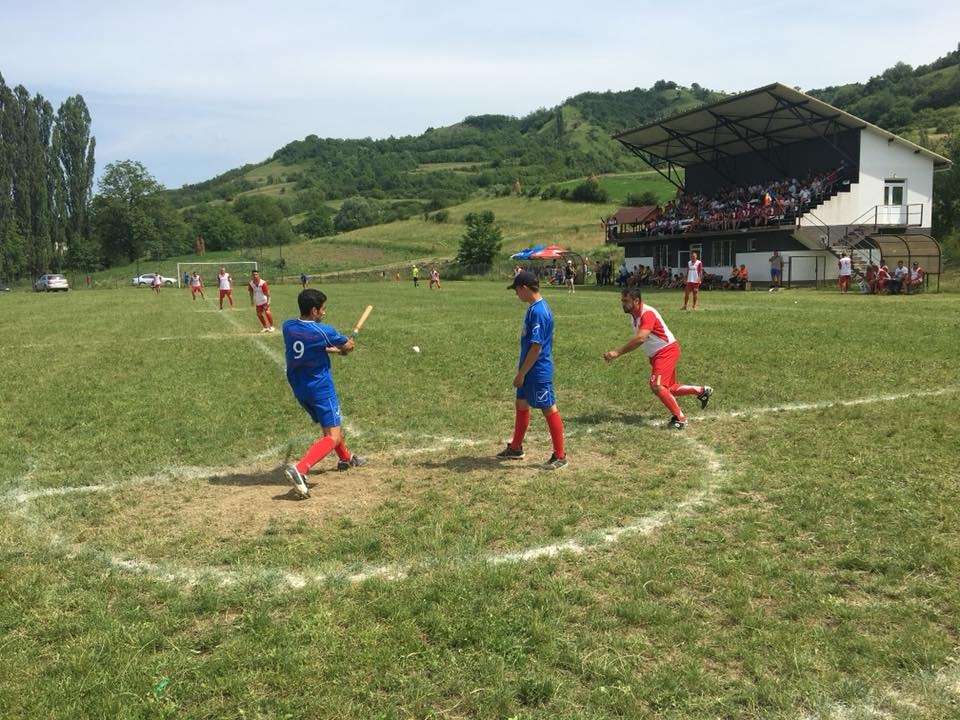 At bat is blue. The grazers are red. Running back and forth seems to be involved. By the grazers? In any case, the setting is bucolic. I can easily imagine the shepherds bringing their flocks down the hills.

Oina: Way Way Back to the Celts

The Irish have a very similar game by the name of Cluiche Corr (pronounced: cli-ho-car). The Welsh call it by the English term Rounders.

How can these countries, 2000 kilometers apart, have such similar games? The answer lies in the maximum expansion of the Celtic people in 250 B.C. before Rome got on the march. 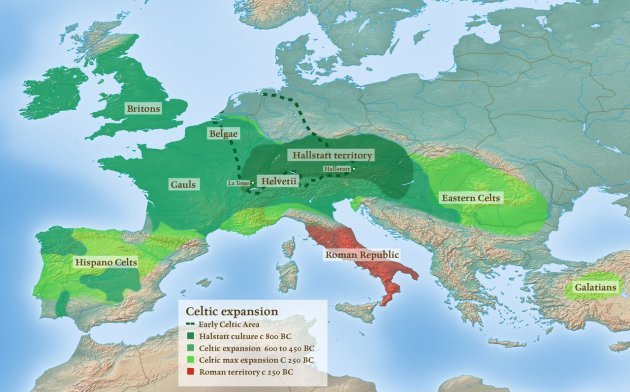 Well known to linguists is the principle of the center v. the periphery. Linguistic innovations occur in the center. The periphery tends to be conservative. Thus, it makes perfect sense to me, culturally speaking, that the periphery of the Celtic expansion – Romania in the East and Ireland/Wales in the West – retained this very old (likely) Celtic game.

Legend has it that Abner Doubleday invented baseball in Cooperstown, NY in the summer of 1839. 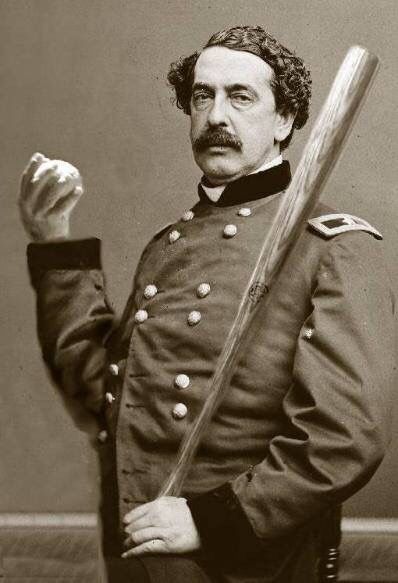 The real story takes us back to the earliest colonists and their children who played Rounders. (And maybe cricket – but who understands cricket?) Of course, the story gets more complicated when the rules of modern-day baseball came into existence mid-19th century.

But how about that? Oina and American baseball have a continuous history.

The Japanese adopted baseball in 1872. And they took to it like they do everything: with passion. My team is the Hanshin Tigers, because they’re my son’s local team. I have even attended one of their games at Koshien Stadium, their home field. 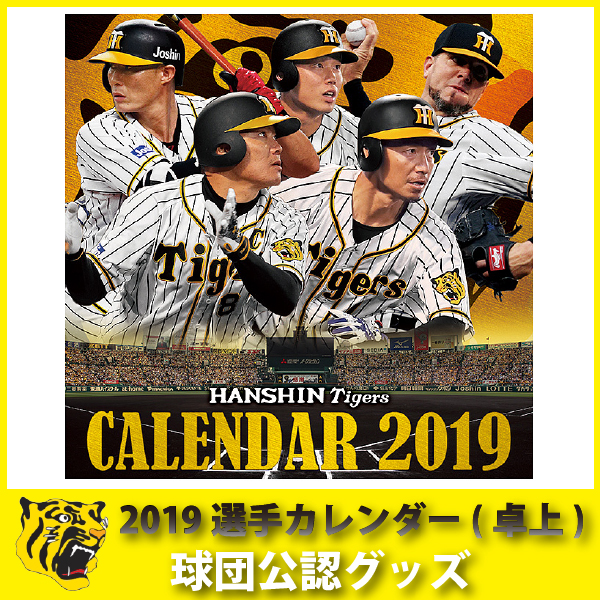 When I’m in Japan, I stay at an inn near the stadium. It caters to families who come in town for the games, and it is always packed. No surprise that when you walk in the lobby the first thing you see is this baseball shrine: 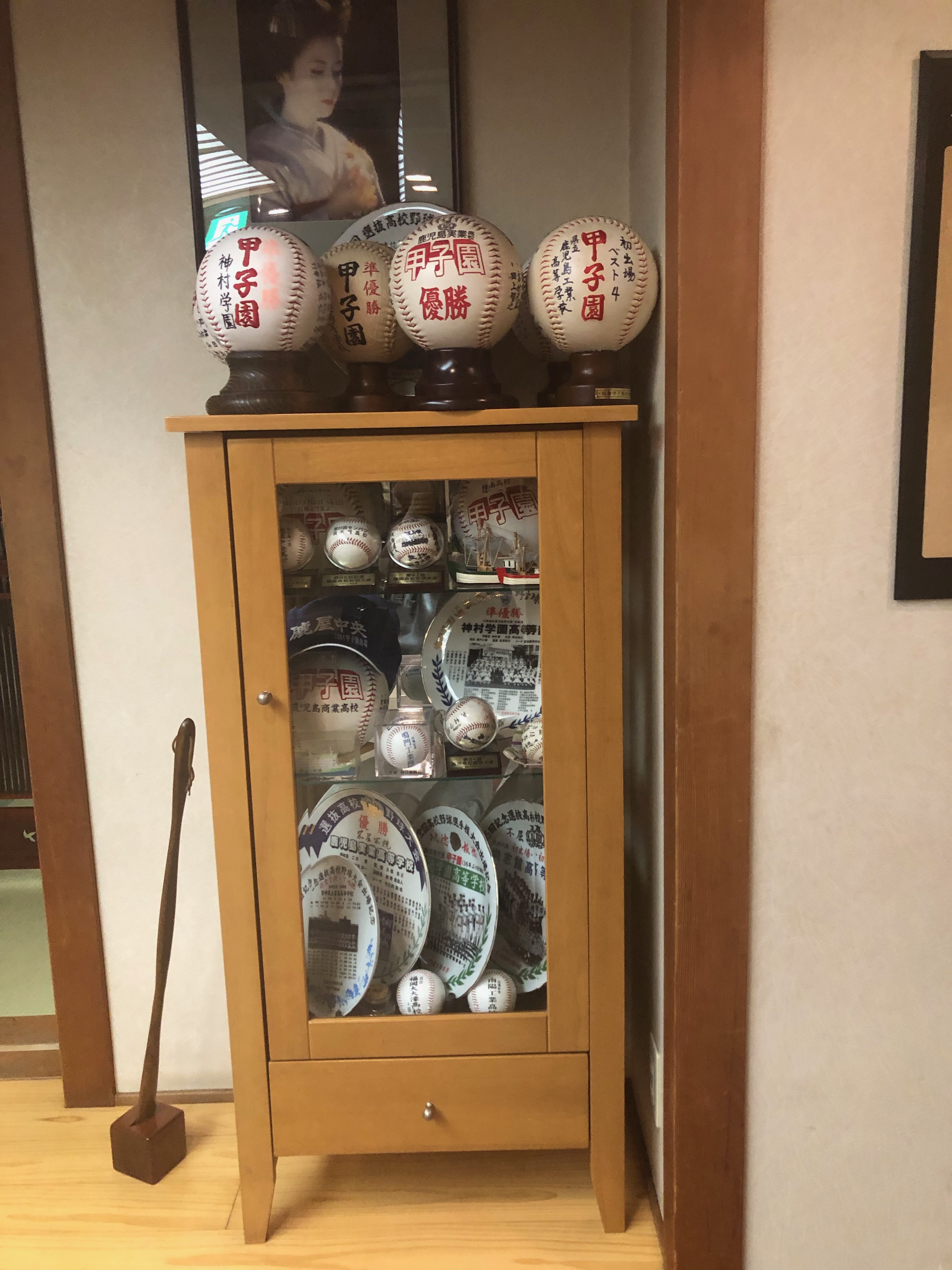 The whole town in baseball oriented. 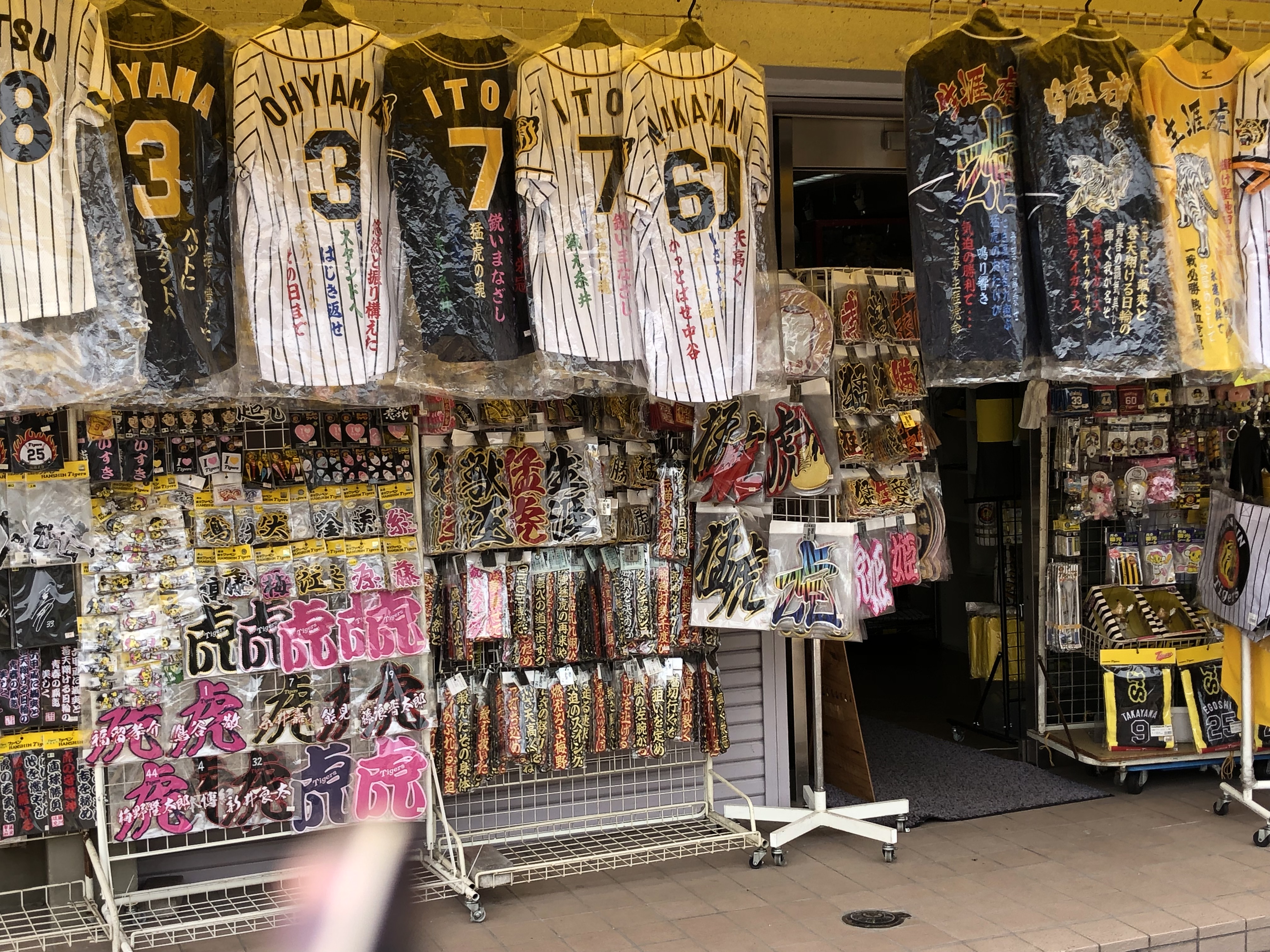 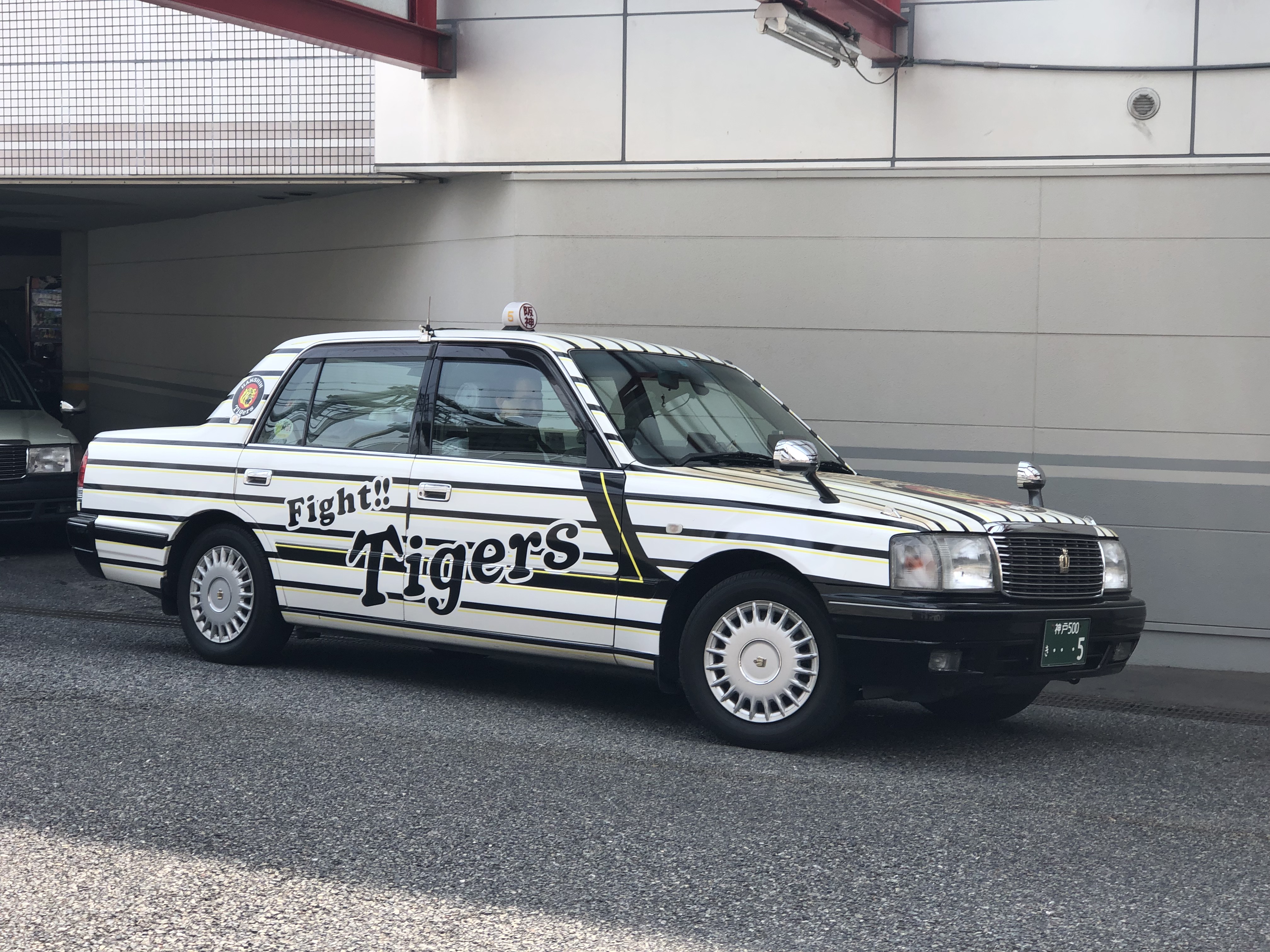 So, now I’ve taken another trip around the world. From Romania to Ireland to the U.S. to Japan.

Many thanks to Oana Stoe and Romlang School for a wonderful summer of nitty gritty Romanian grammar and cultural discoveries – with my new understanding of oina at the head of the list! 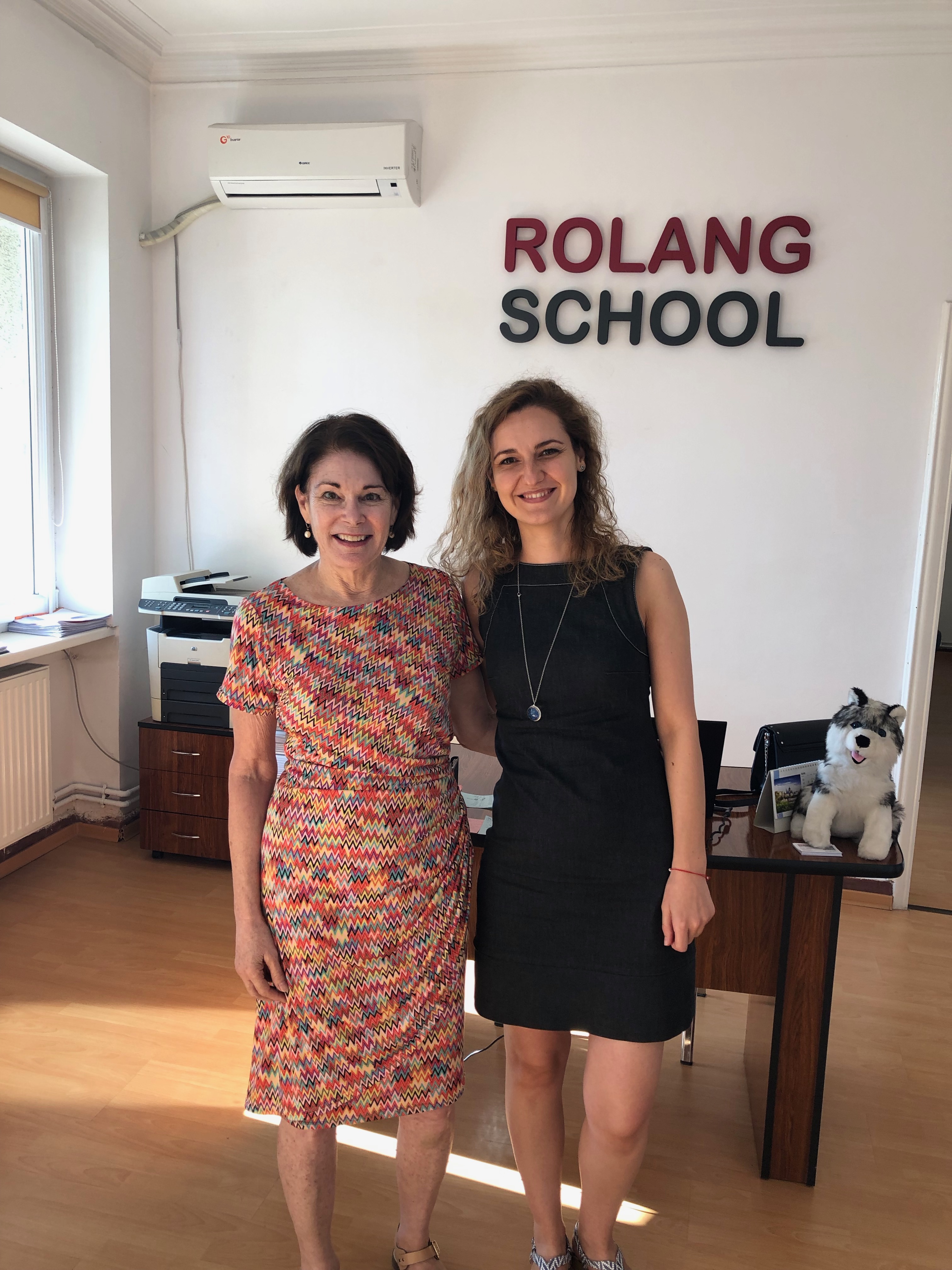 This post for me is bittersweet because today is the day I’m flying from Bucharest back to North Carolina. 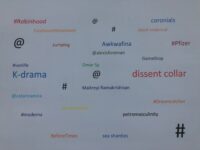