Old Gold Mountain is the name for San Francisco in Chinese, seen in the title image. As mentioned in the previous post, gold was discovered in California in the 1840s.

This is my walking-around-the-city blog. It’s my kind of tourism: wandering around to see what I can see.

Old Gold Mountain is the title of Part I of my second time-slip romance, The Crimson Hour. The story takes place in San Francisco – Bucharest, Romania – and Hong Kong of the 1890s and 1990s.

I’ve been to San Francisco quite a number of times. I used my experiences one of those times to depict the city my hero and heroine, Hanes Reynolds and Eloise Popescu, move through. Eloise, by the way, has been a screw-up her whole life. What she sets in motion in The Crimson Hour is the last, massive entry she makes in her screw-up-a-log.

Here’s what I saw this time around when I laced up for an early morning walking tour.

San Francisco takes its Chinese heritage seriously. Around the corner from China Town on Union Square is Saks Fifth Avenue. They have their windows all done up for Chinese New Year. 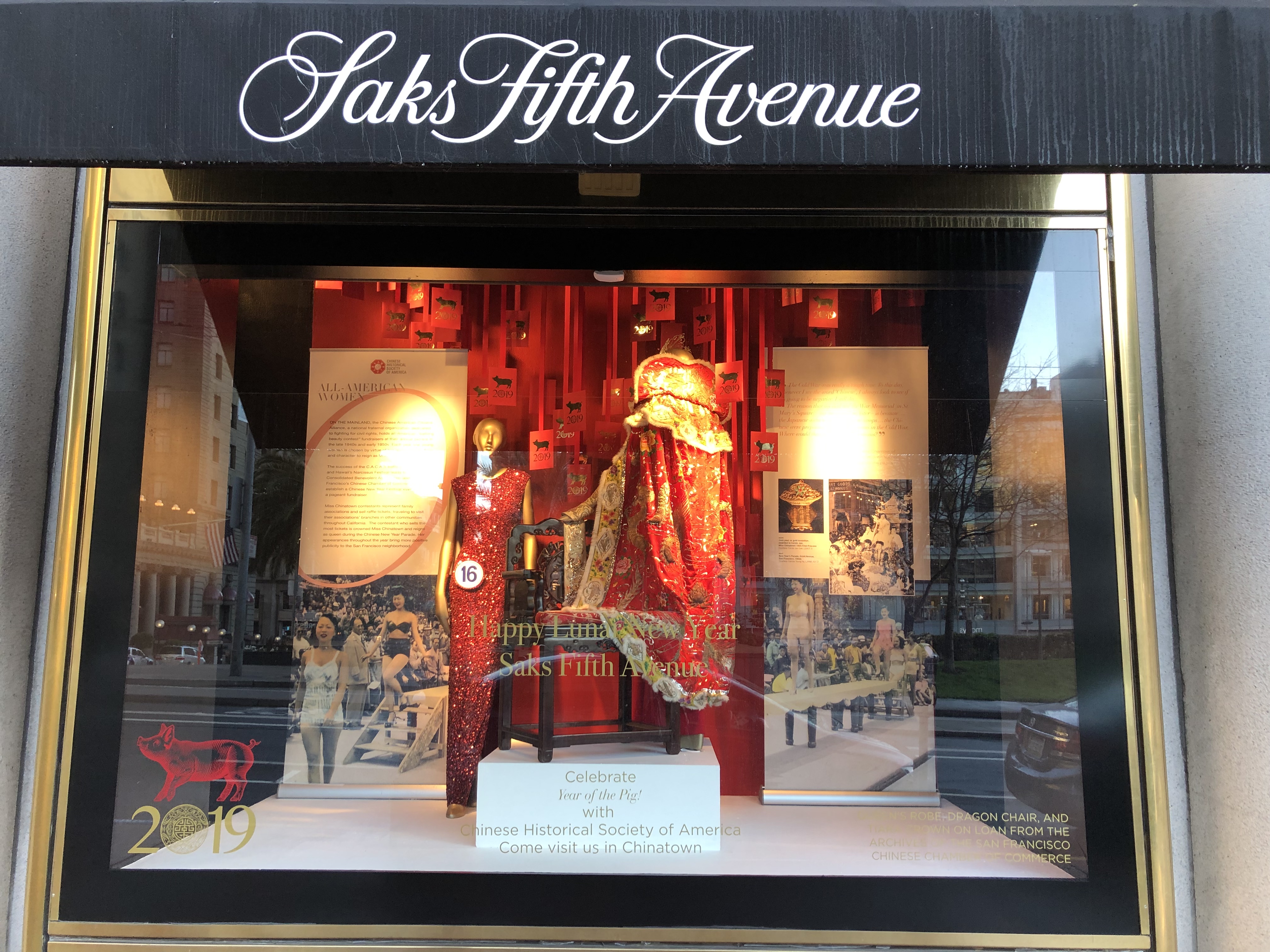 February 5 began the Year of the Pig.

Chinese New Year is recognized all over the city: 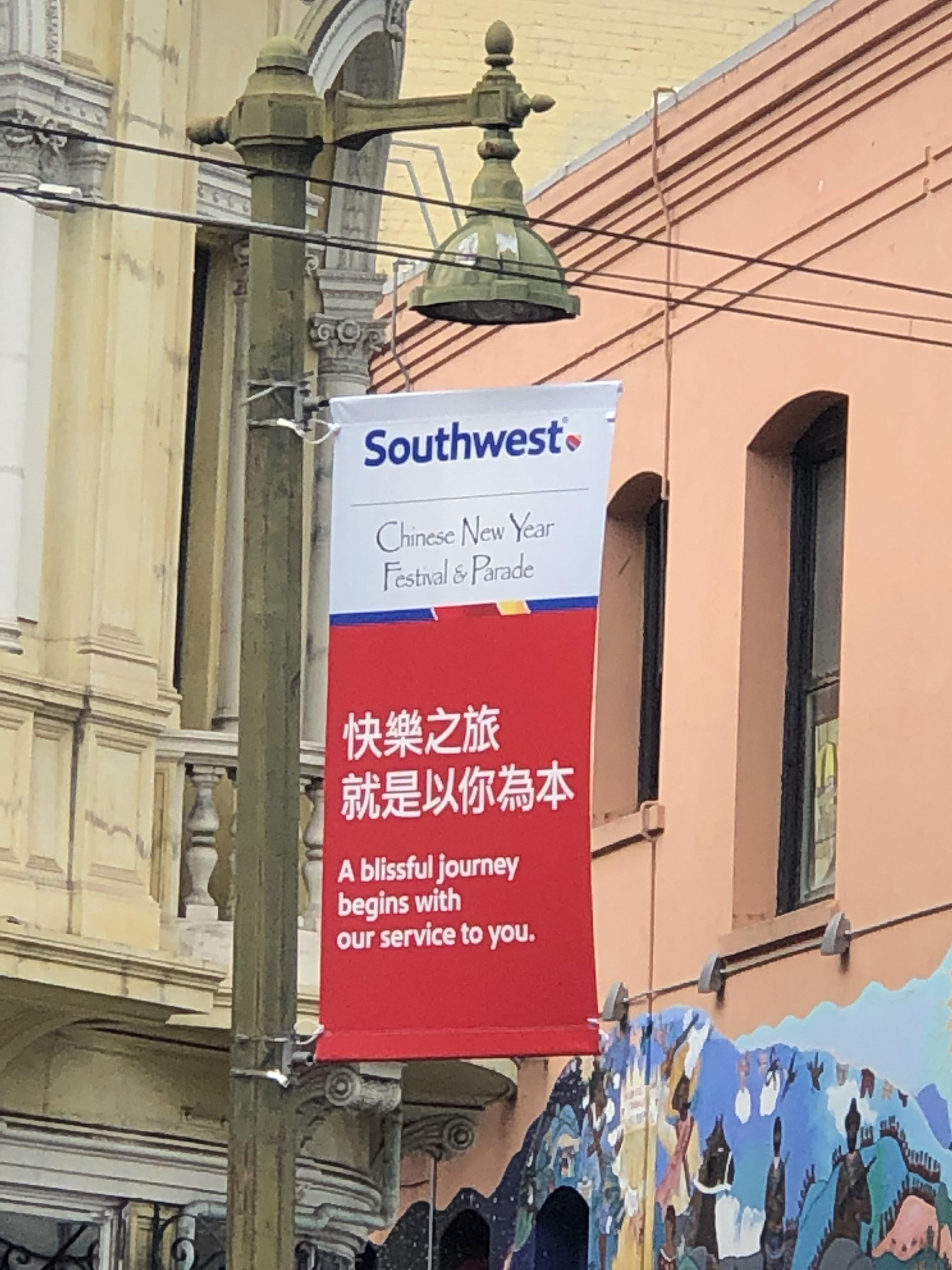 I got to the Grant Avenue gate: 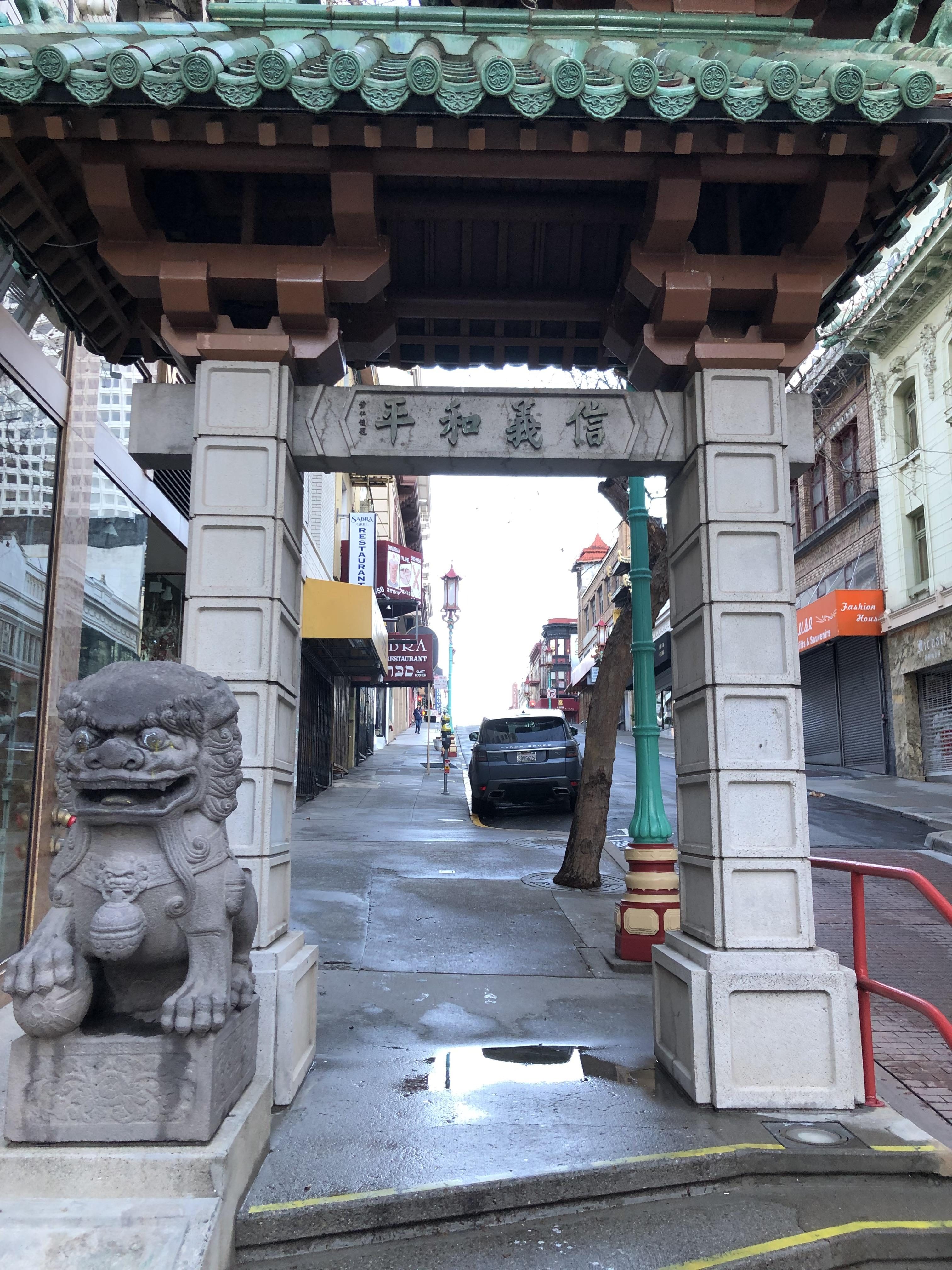 And arrived at the corner of Grant and California: 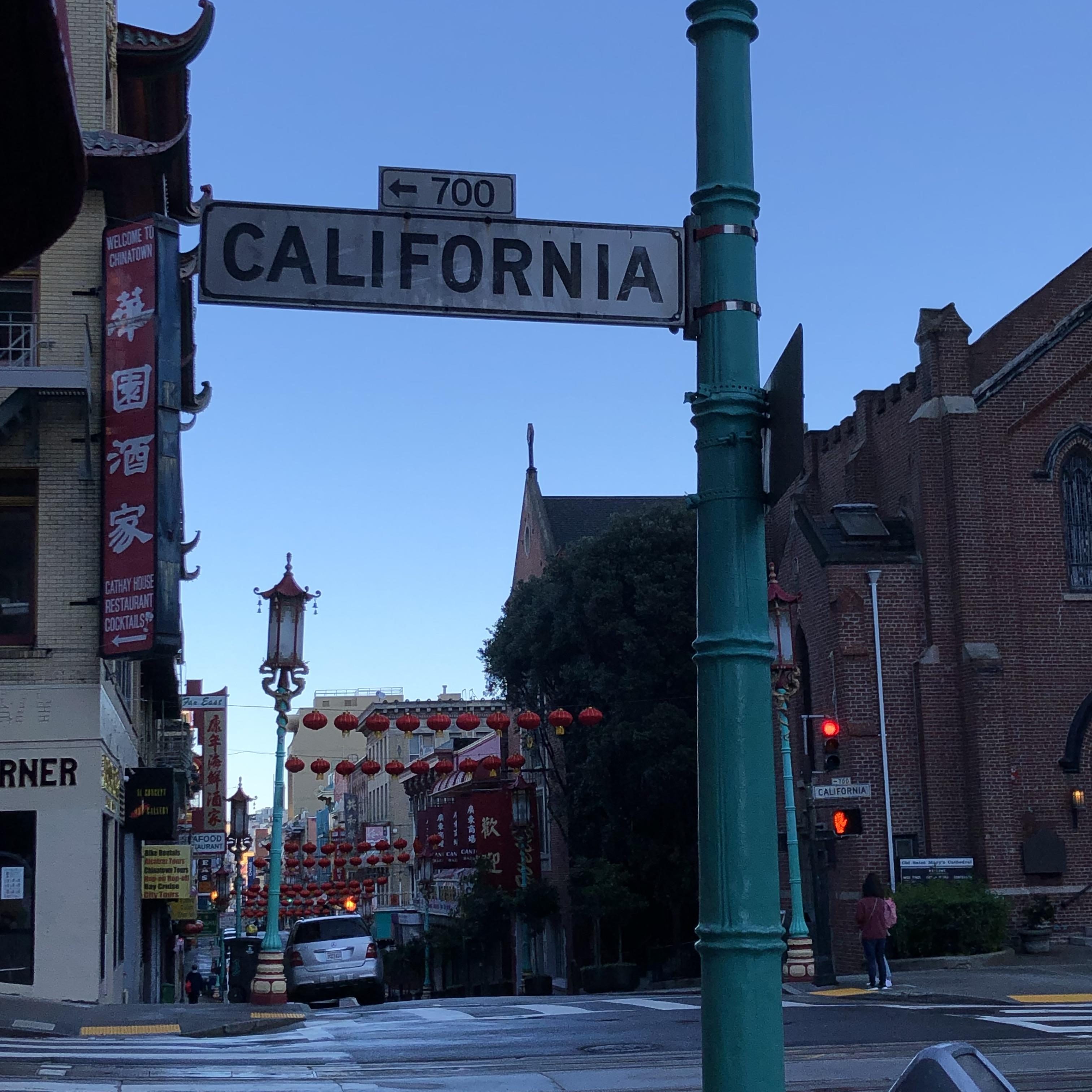 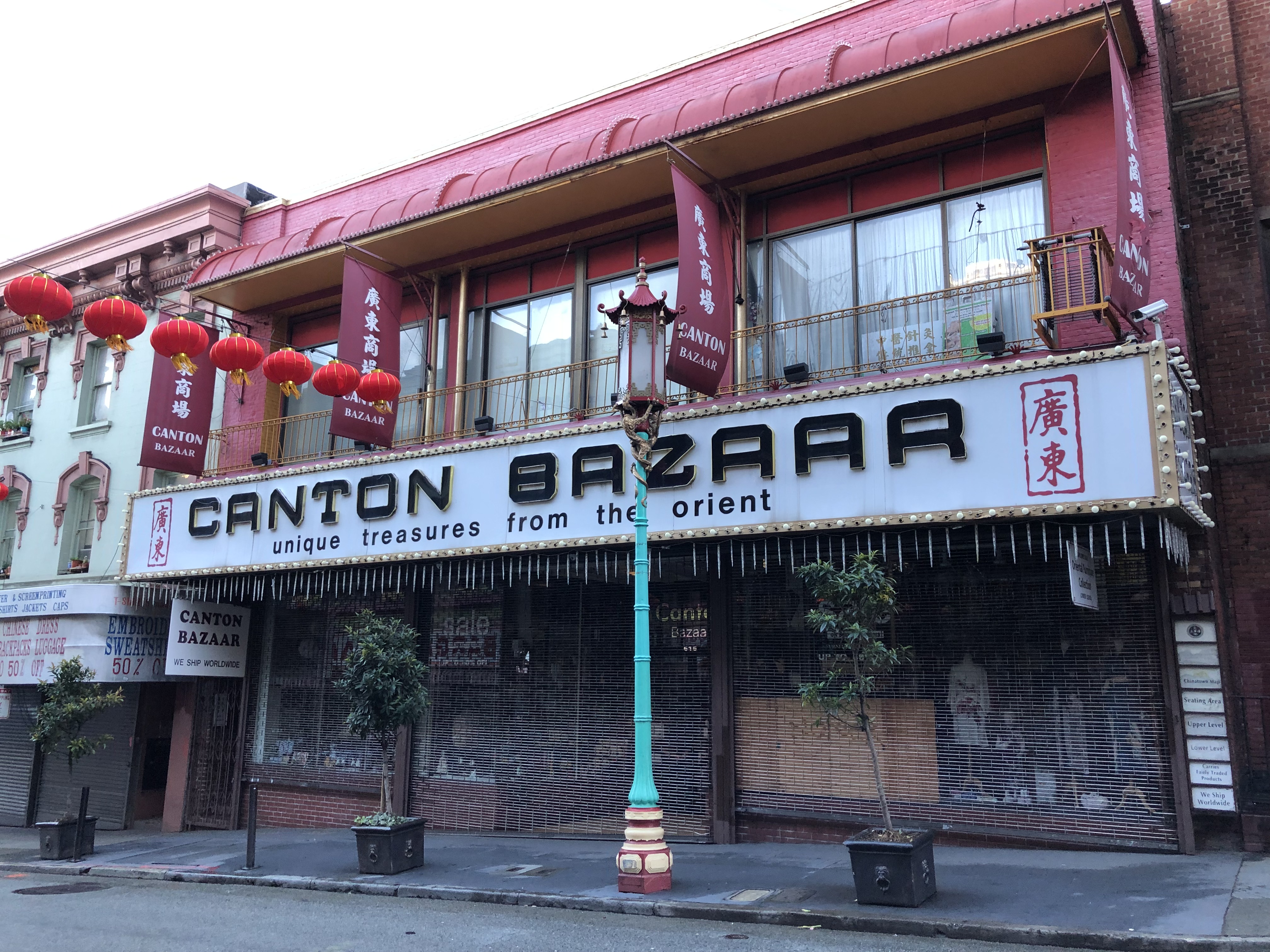 Here’s a China Town glimpse of the Transamerica Building: 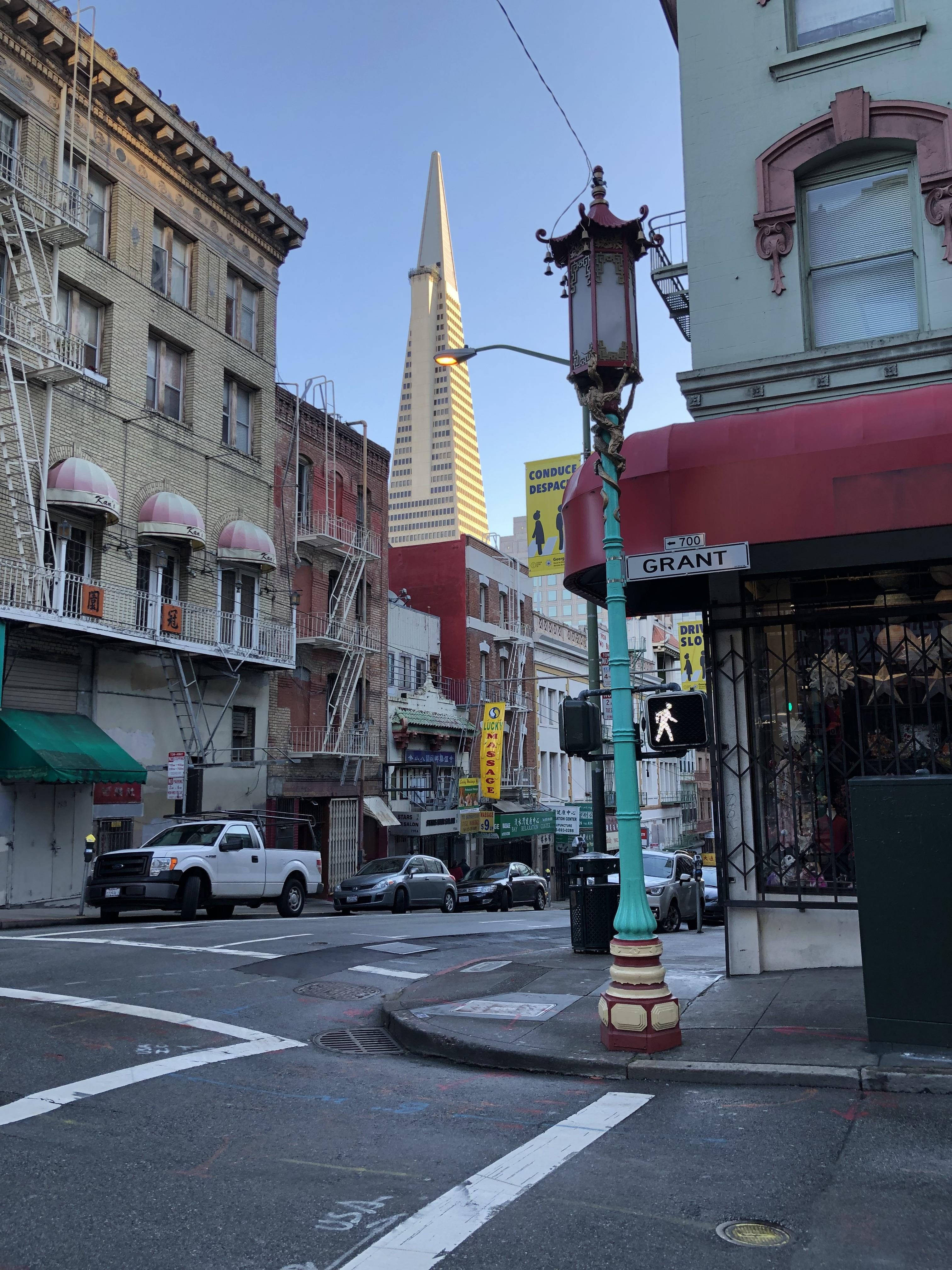 The fun of walking around such a hilly city as San Francisco is that you get glimpses of the tourist attractions I put on my Top Ten last Friday – and some I didn’t.

From the top of Lombard Street: 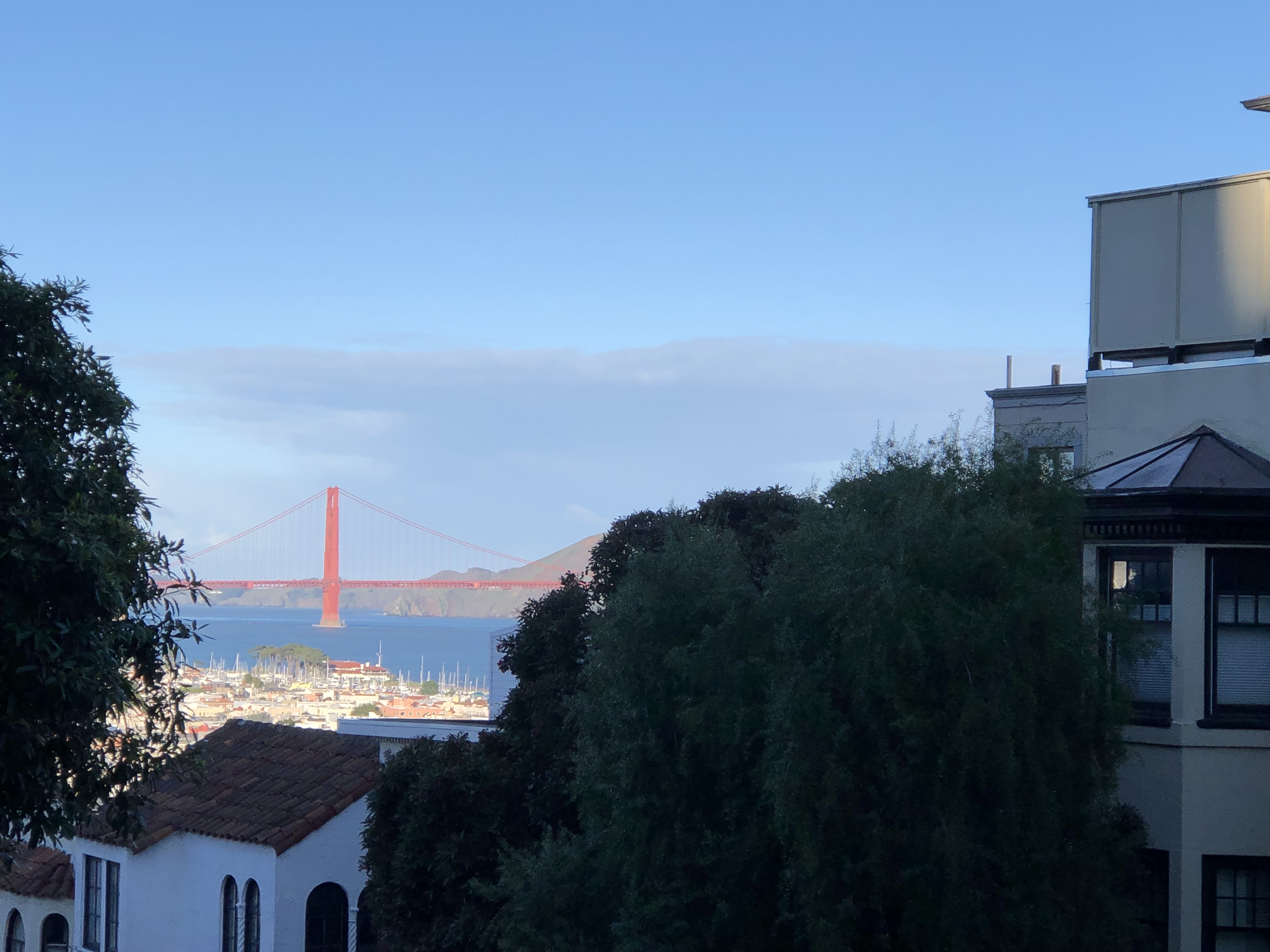 Going to cross it on my way to Mill Valley, Marin County to visit my niece 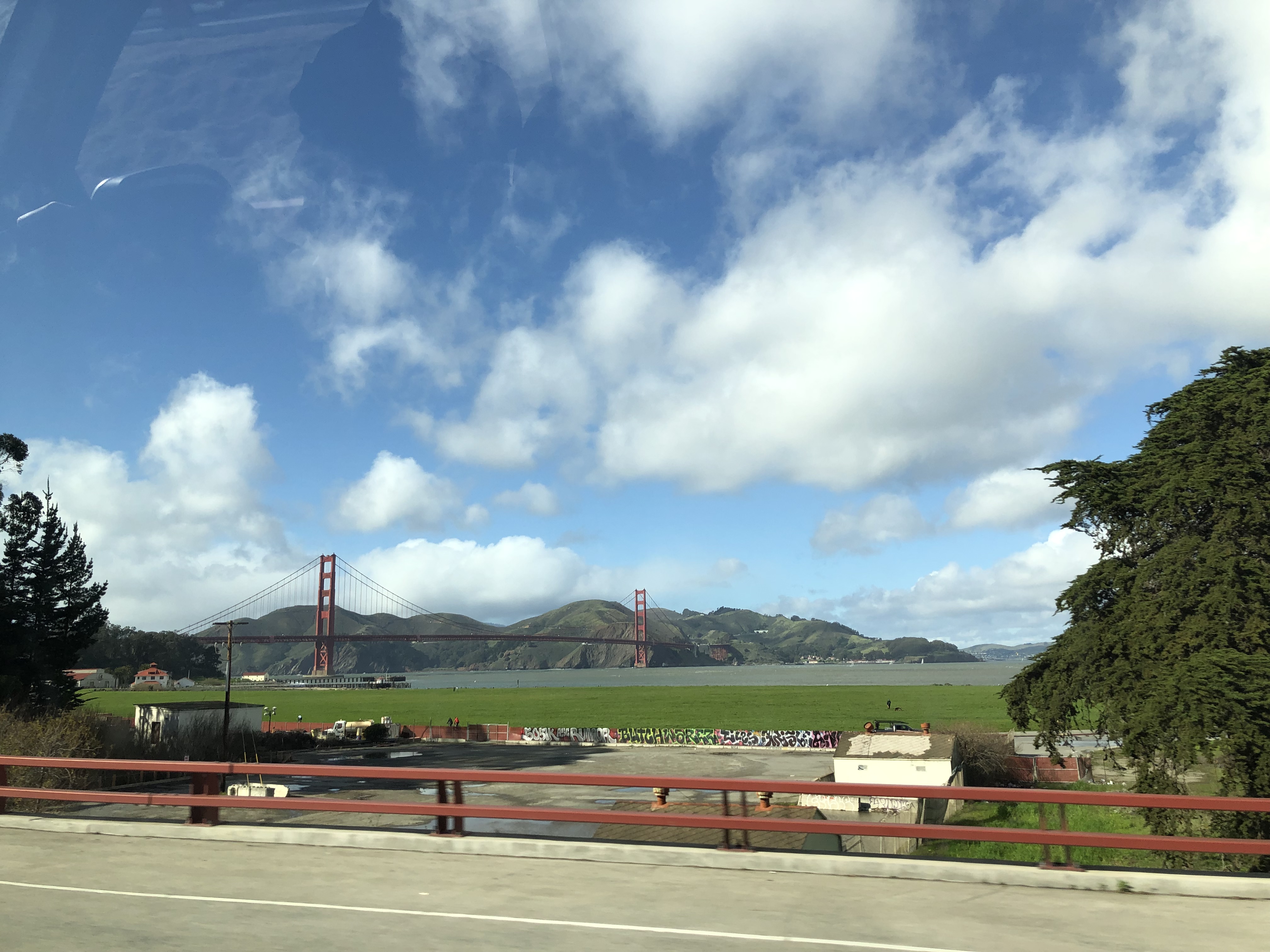 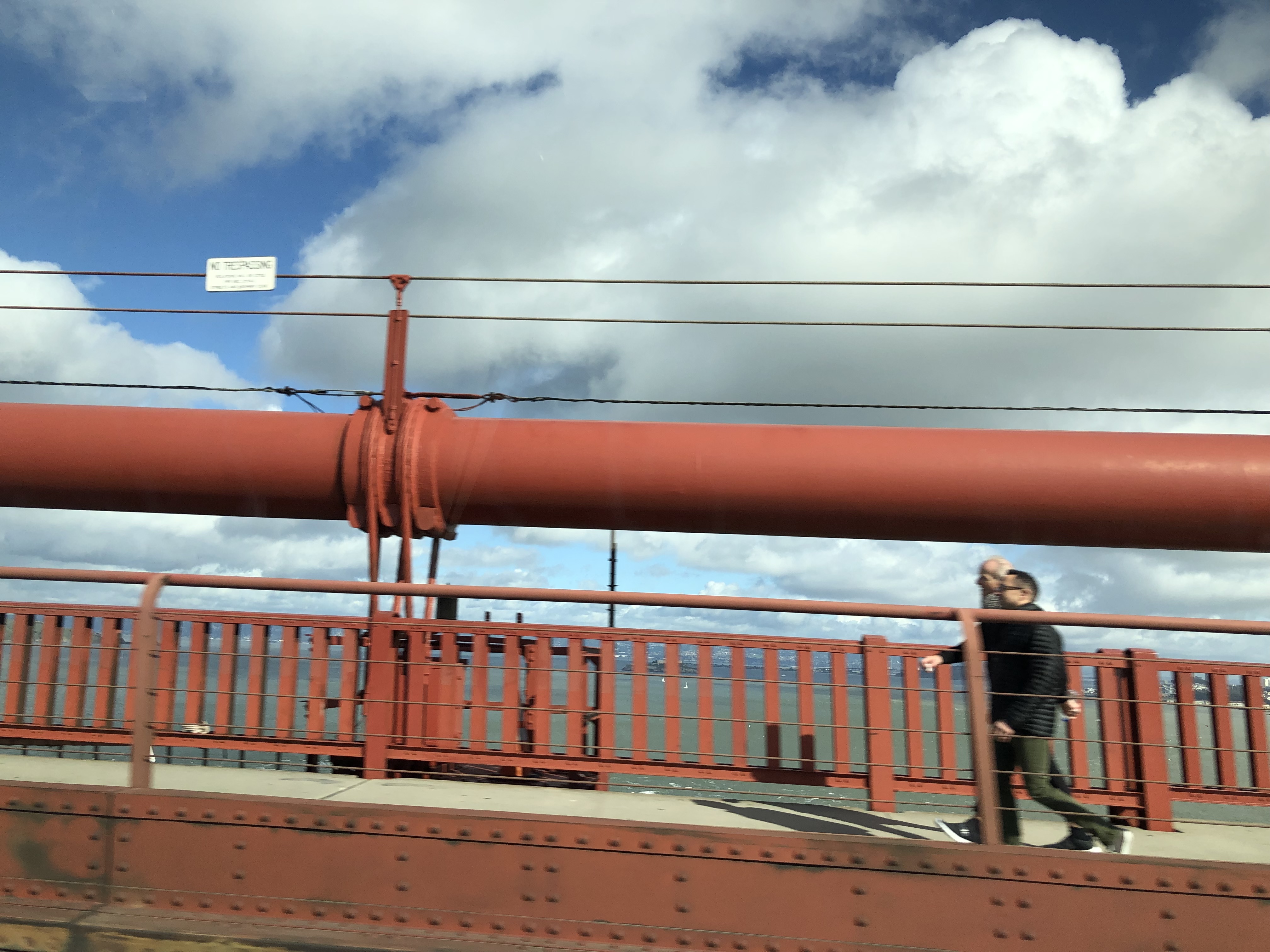 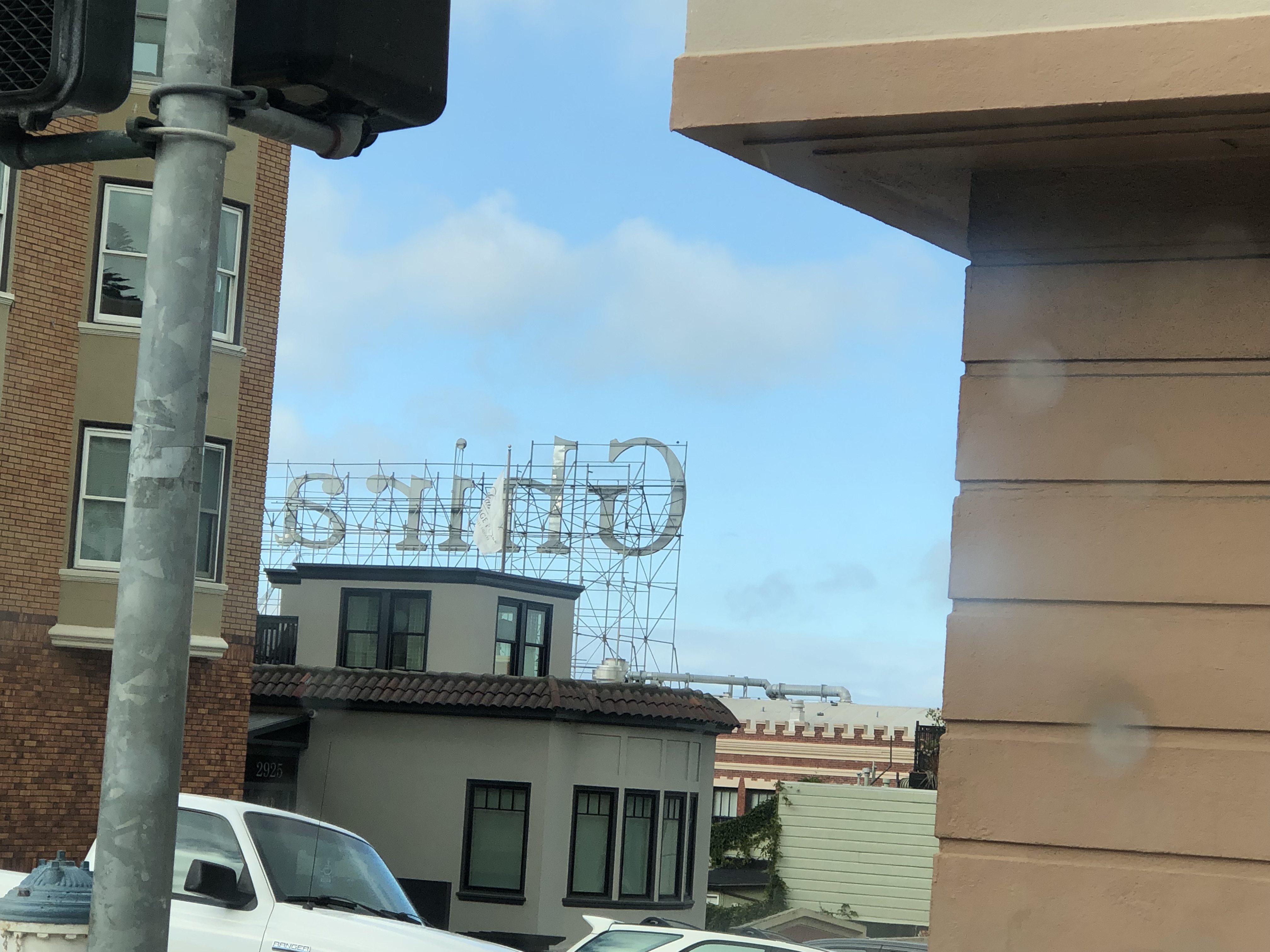 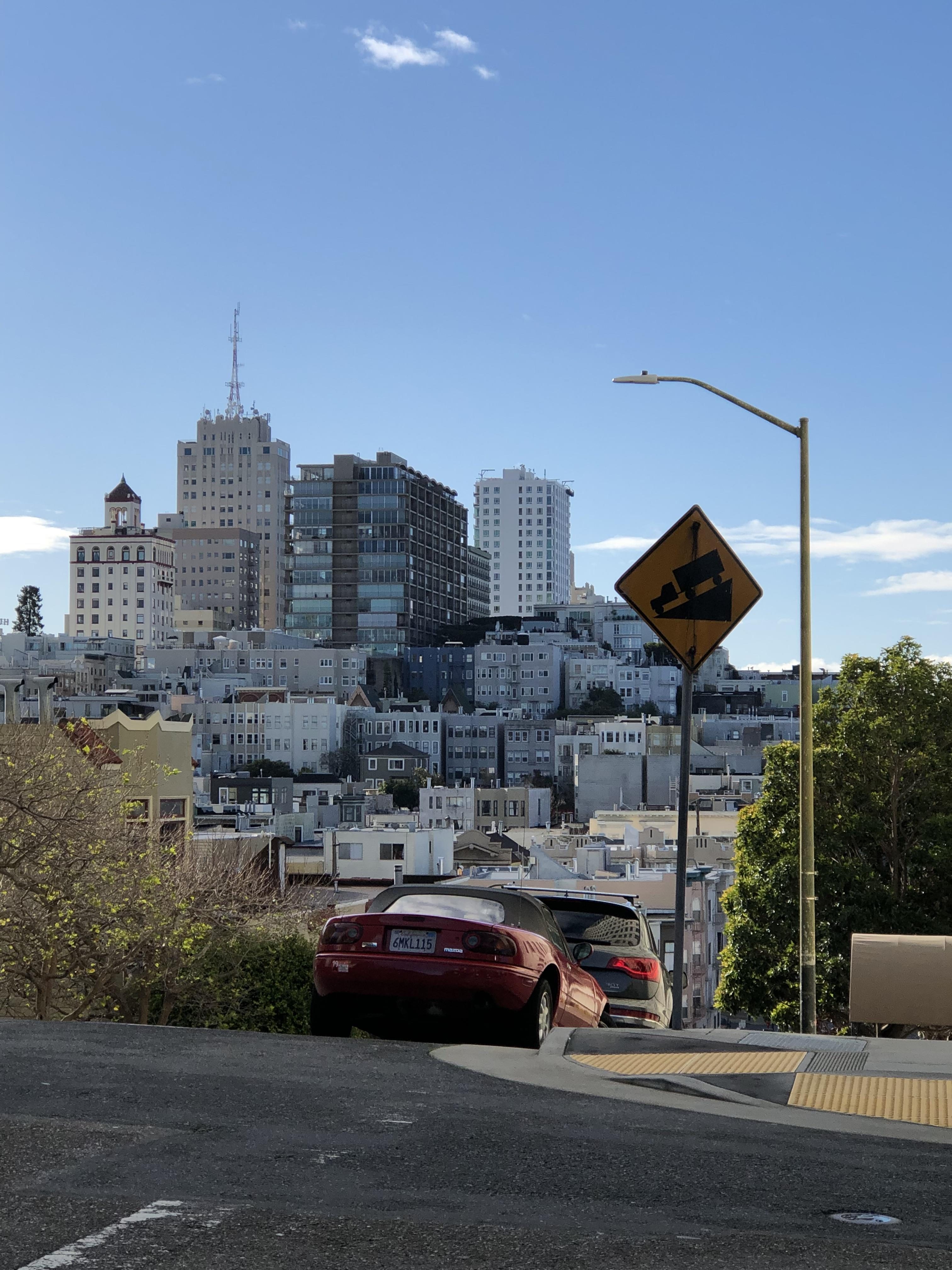 Here’s a glimpse of Coit Tower seen from the Ferry Building: 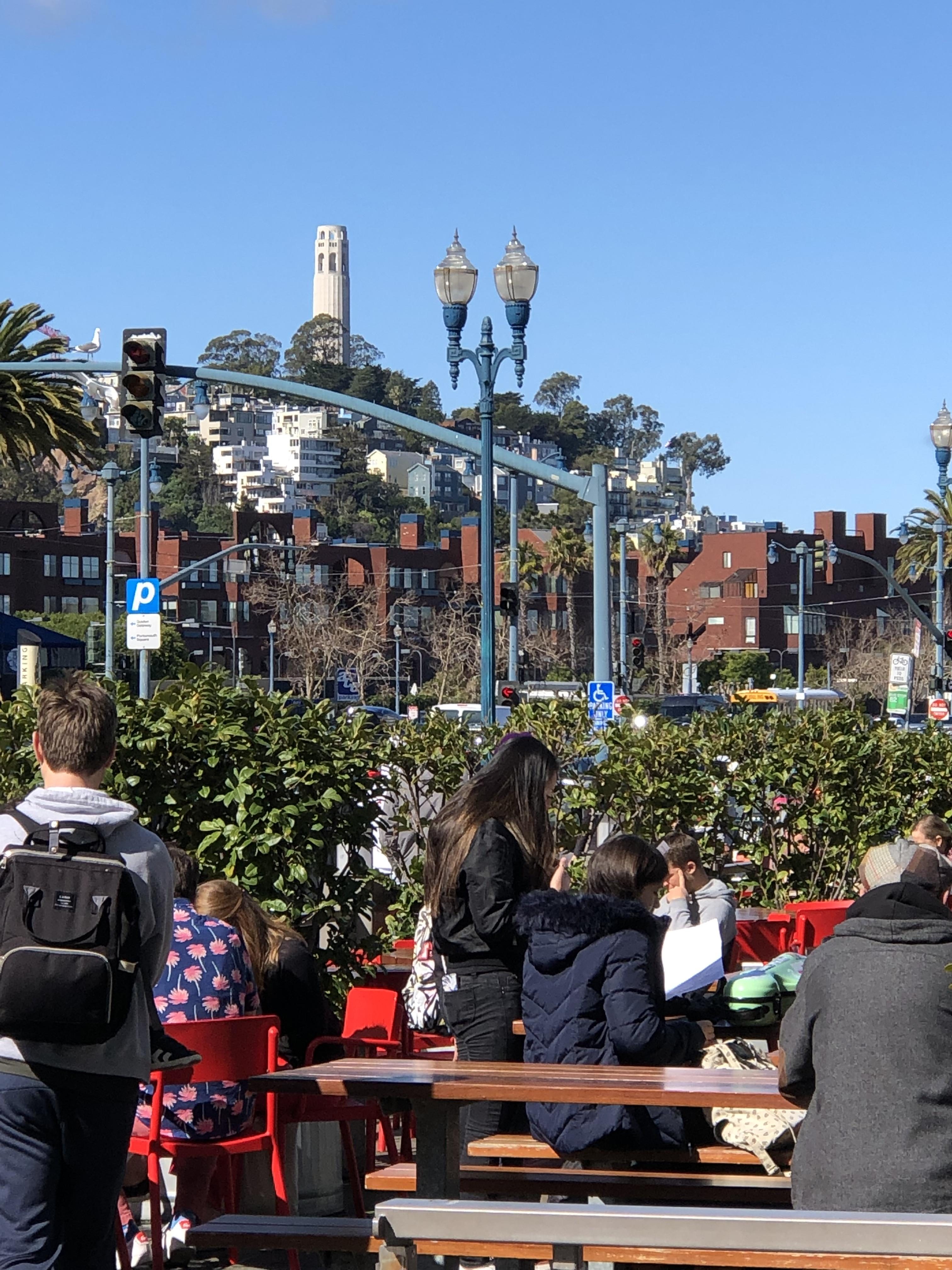 Coit Tower sits atop Telegraph Hill. Its famous for being famous, I guess

Turn around and there’s the Ferry Building: 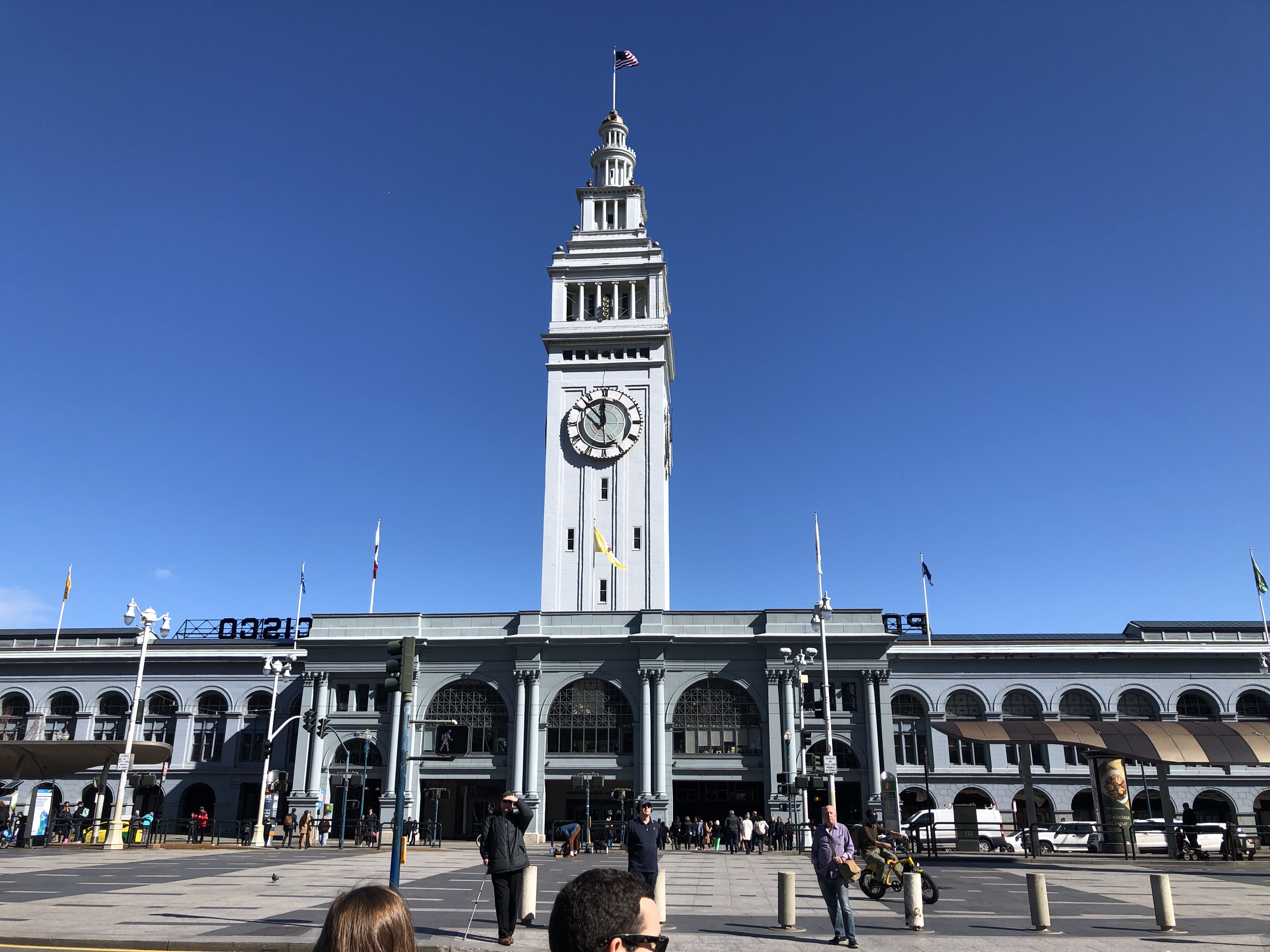 Then there’s inside the Ferry Building: 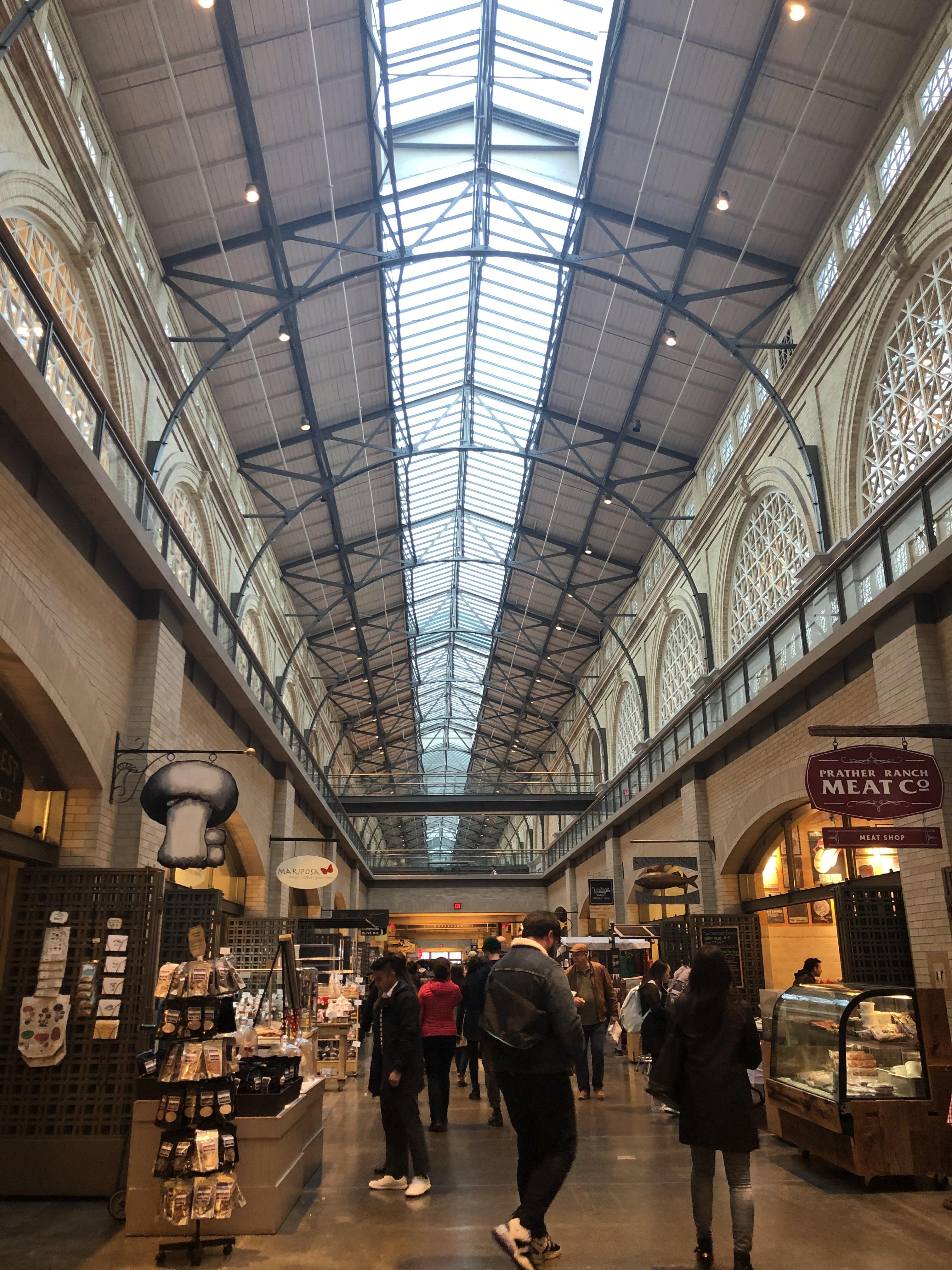 Ferries do leave from the docks out back.

As I walked around I glimpsed the island of Alcatraz: 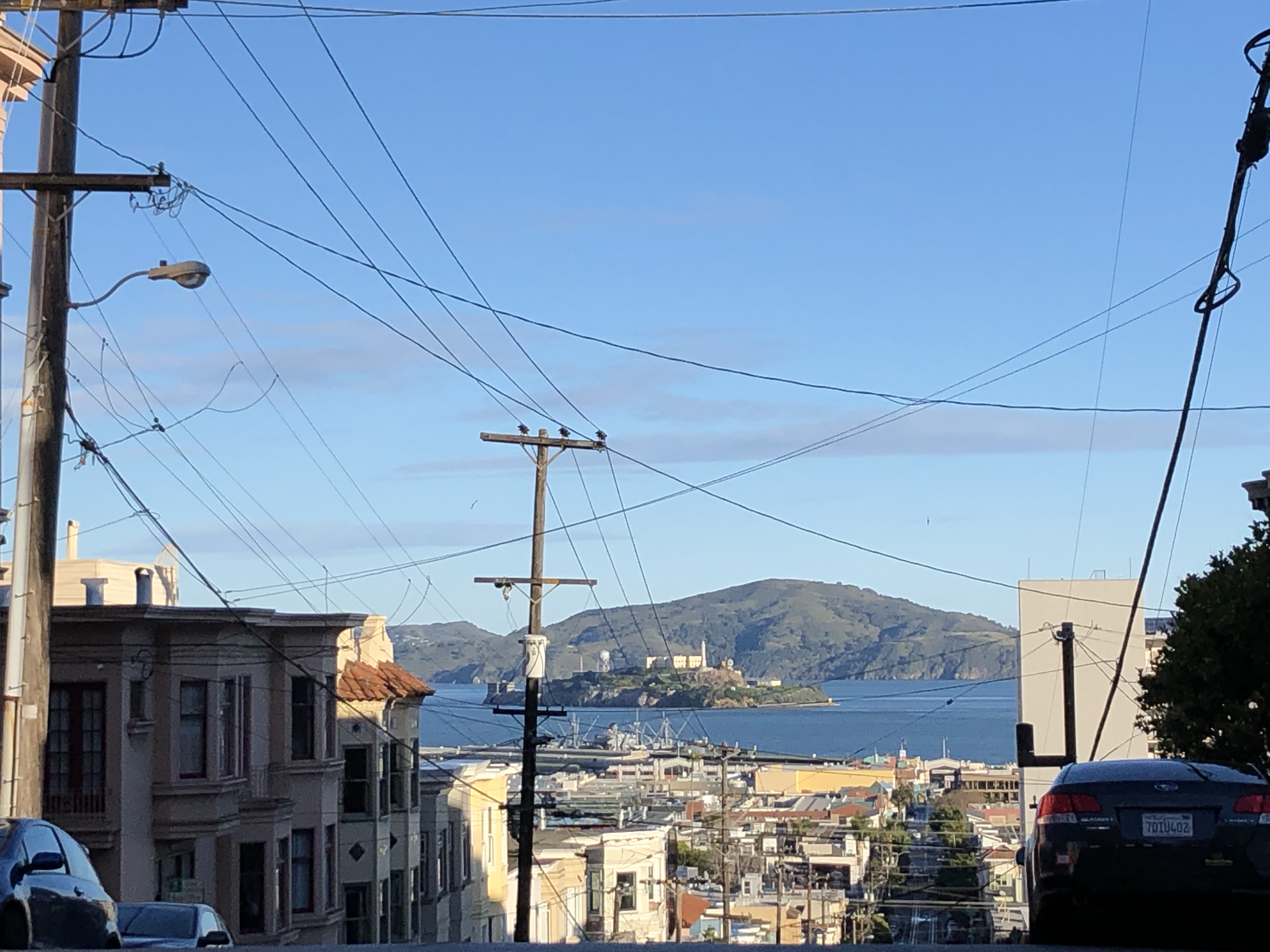 Alcatraz was infamous for the notorious federal prison of the same name that existed there from 1934 – 1963. The word alcatraz is a Spanish borrowing from Arabic meaning ‘pelican.’

Here’s the view outside my hotel window: 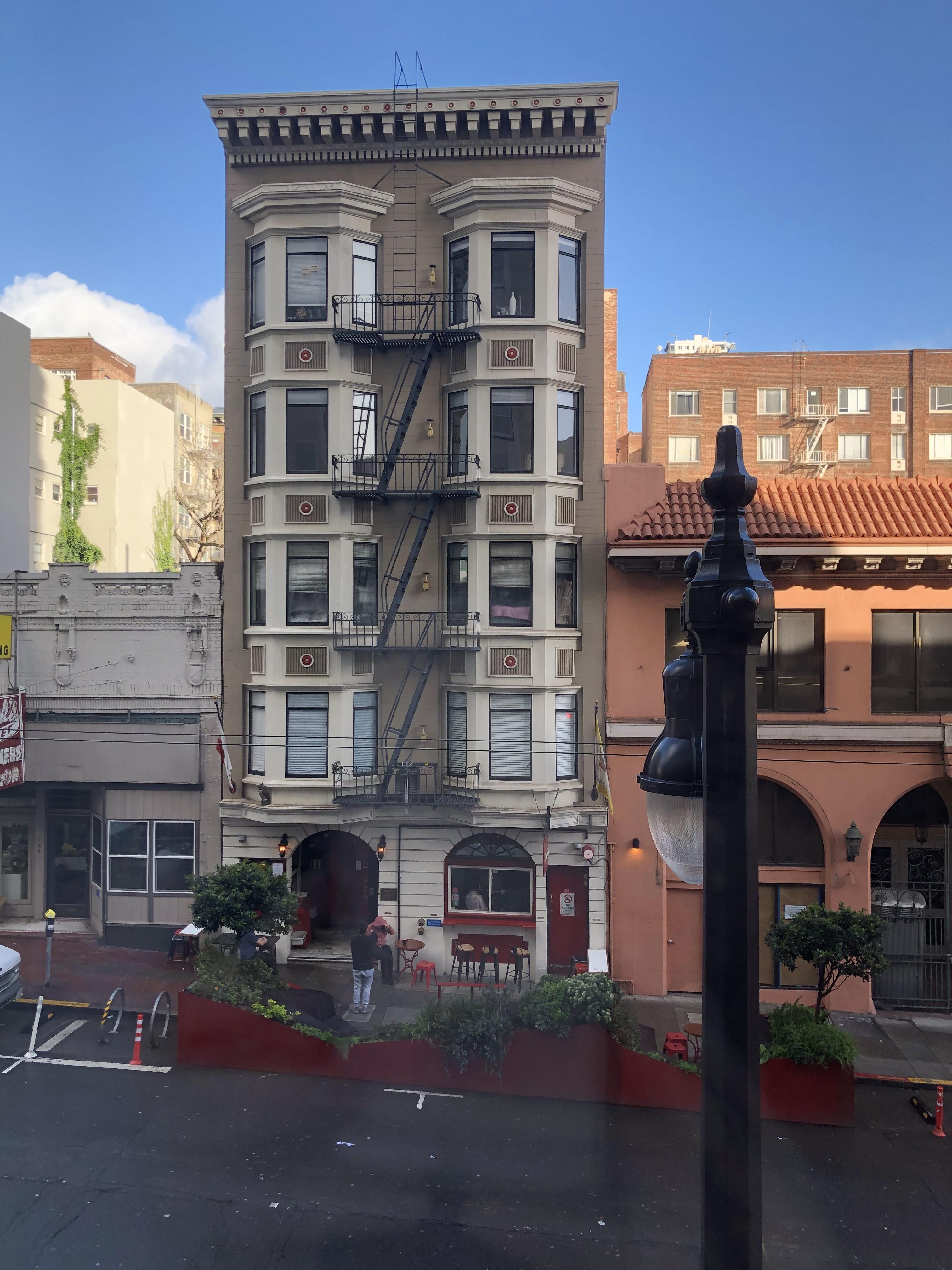 Houses in San Francisco are distinctive. 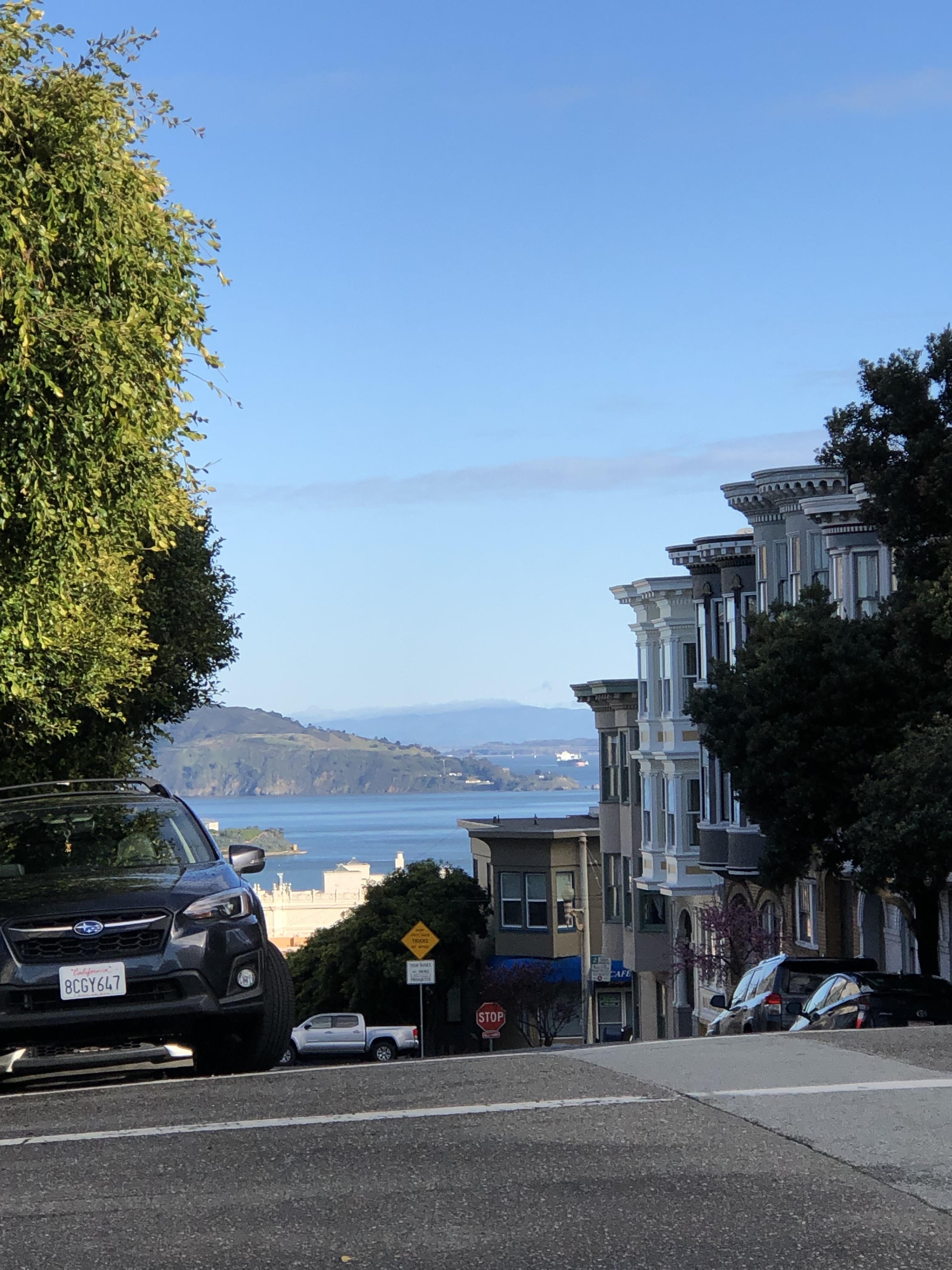 One restaurant recommended to me by several people is Burma Superstar on Clement. 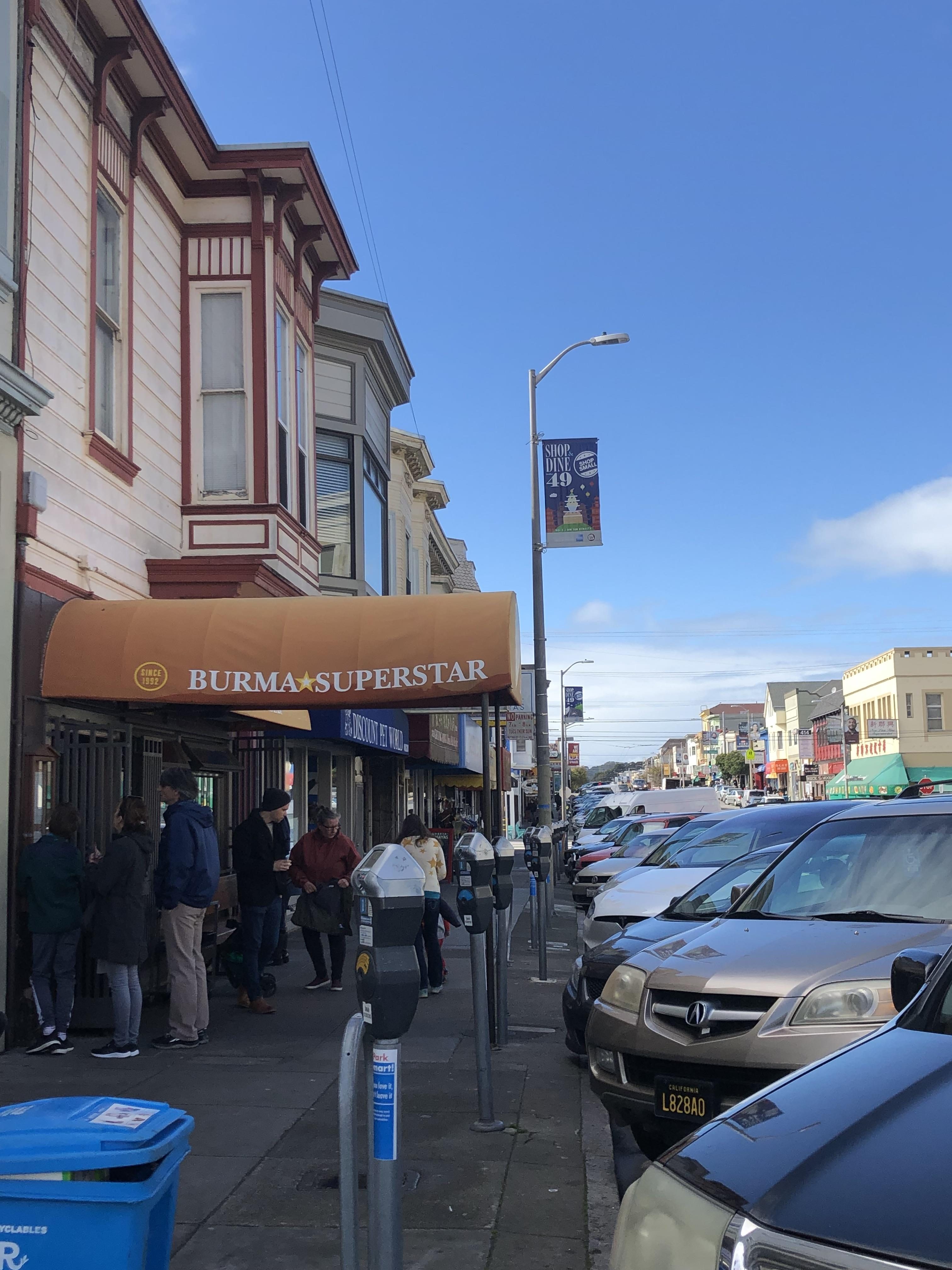 It was too mobbed for me to get it, so I didn’t have any Burmese cuisine. However I did discover this part of town that is the new China Town. 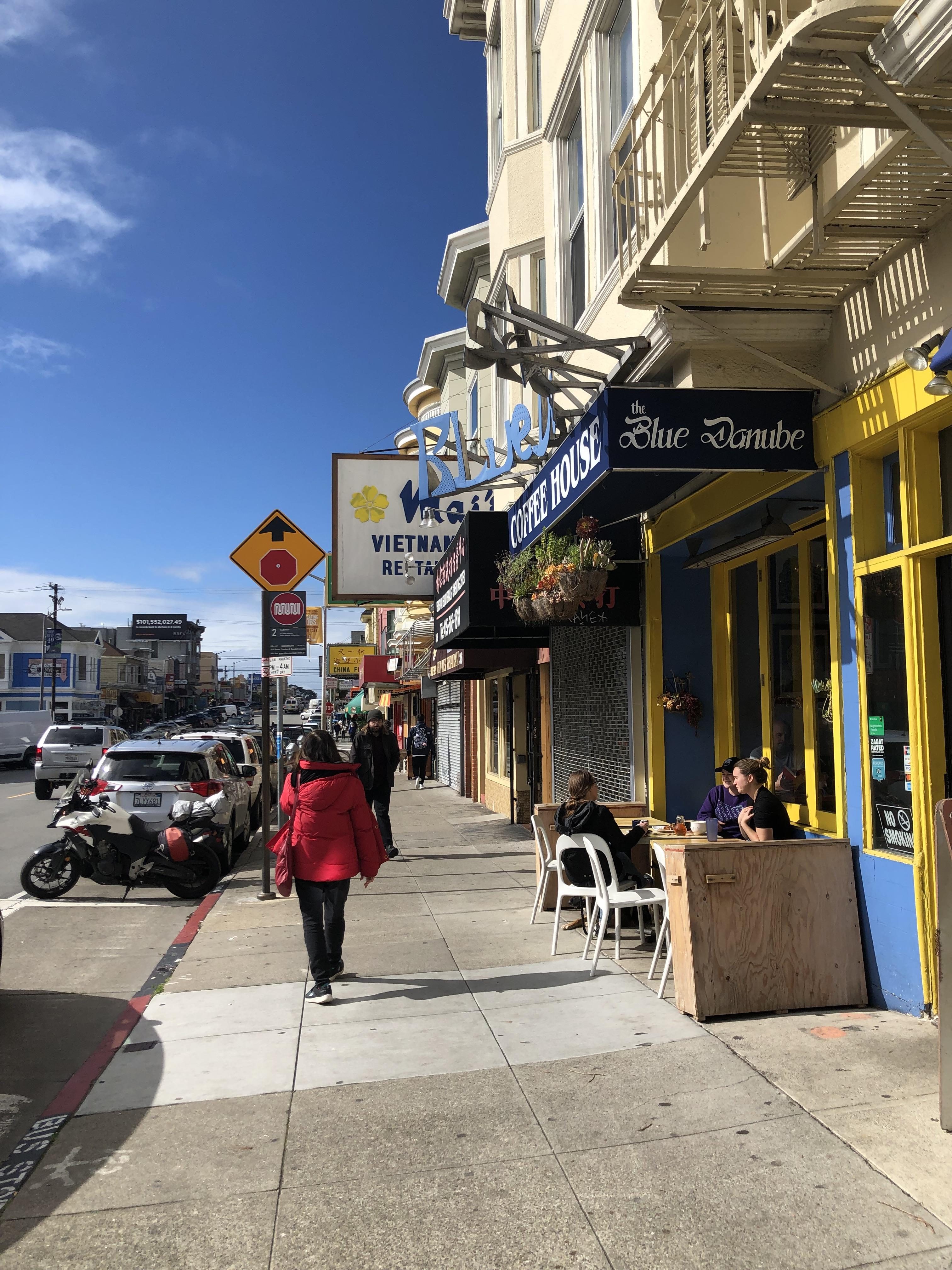 Hardly China here with The Blue Danube Coffee House and the Vietnamese restaurant. Neither is the Mexican place I ate at a few doors down from Burma Superstar

Old Gold Mountain: Who can afford it?

I paid for my hotel on points, ate breakfast out a couple of times, and splurged liberally on Lyft. Otherwise, I didn’t really experience the cost of living in San Francisco. However, I’ve long heard that it is super expensive.

I took this photo of a house for sale on California Street so I could look up its sale price. 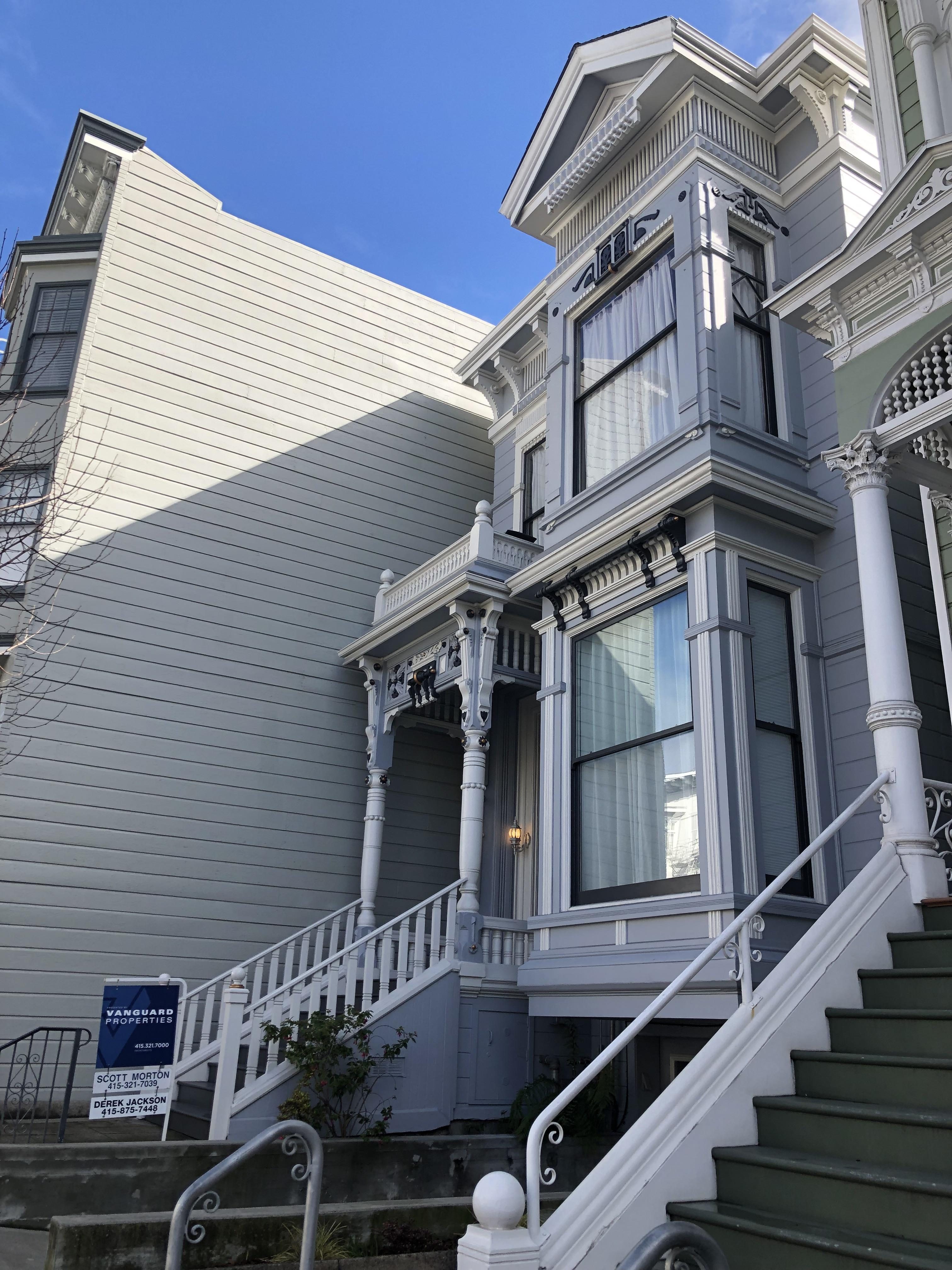 I was unable to find this particular listing at Vanguard Properties, so I cannot say how many millions it costs, but it’s surely more than one

Here’s the receipt for the nail file I bought in San Francisco: 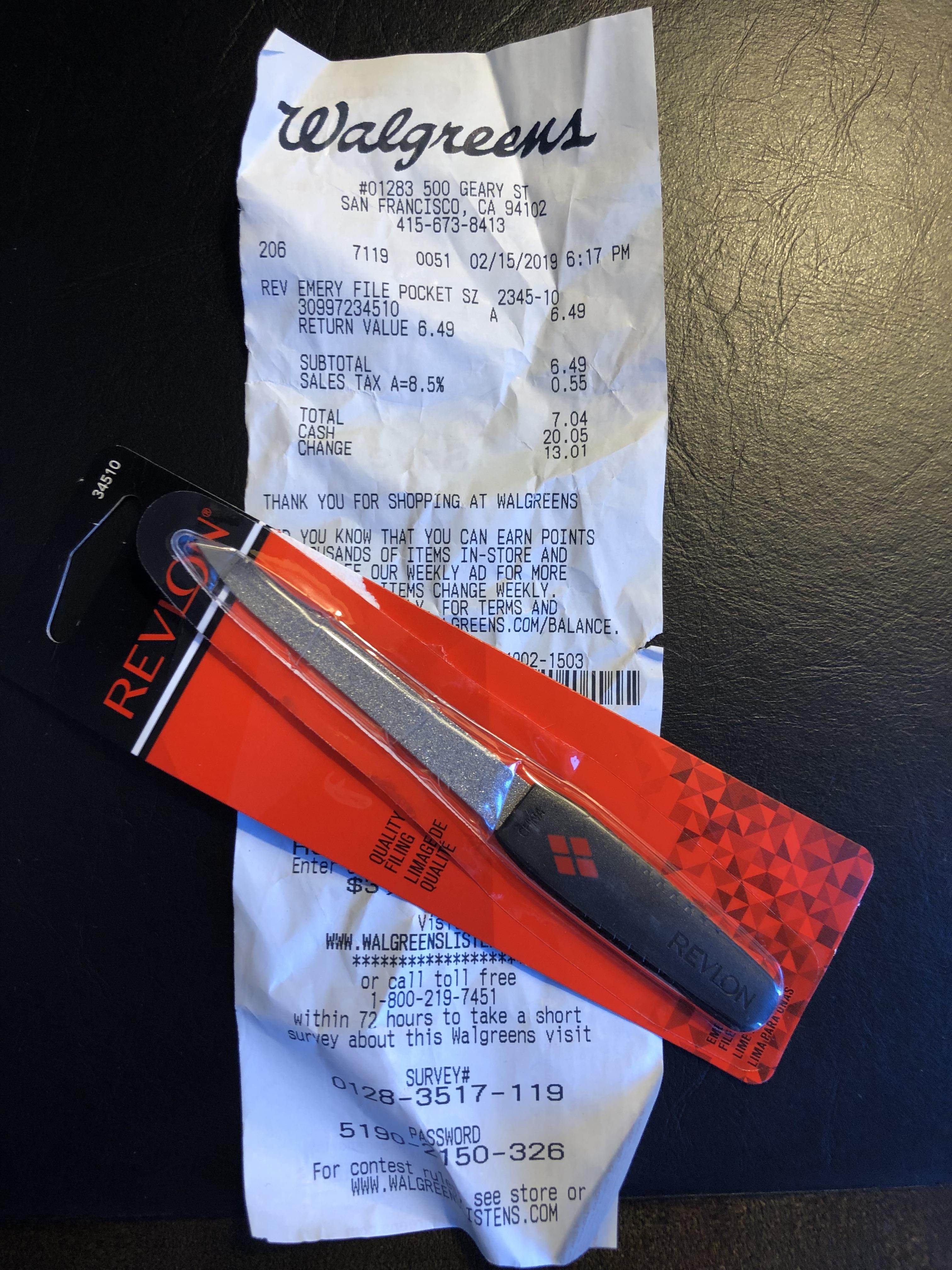 $6.49?! I didn’t look at the price before buying it and almost didn’t believe my ears when the cashier rang it up.

Here’s what 50₵ more buys you at the Harris Teeter in Durham, NC: 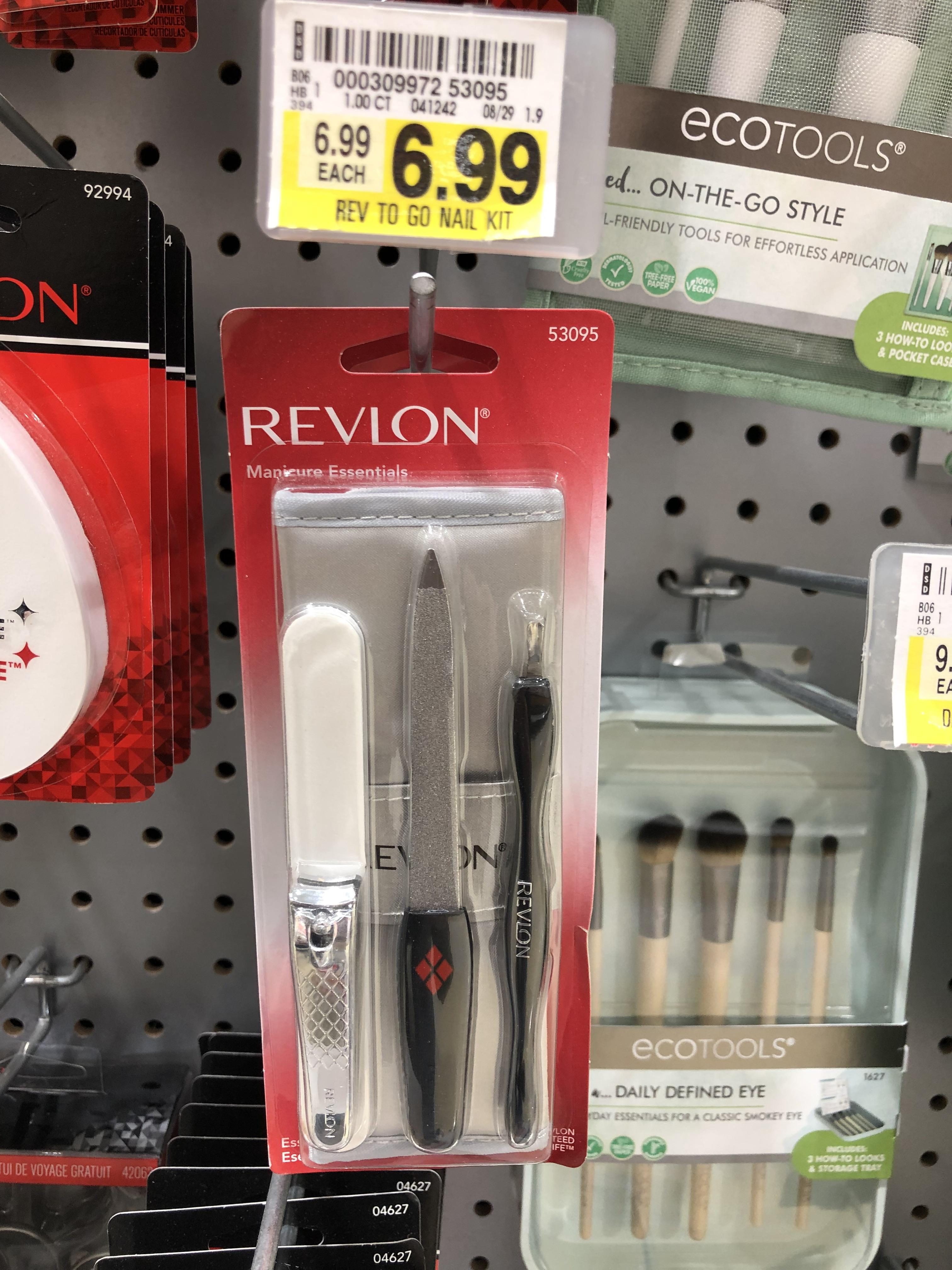 I couldn’t find an individual nail file. My guess is it would cost under $2

Hey, it’s not about the money – or maybe it is. The more desirable place to live, the more expensive. Simple fact of life.

I was totally happy I spent the weekend in San Francisco.