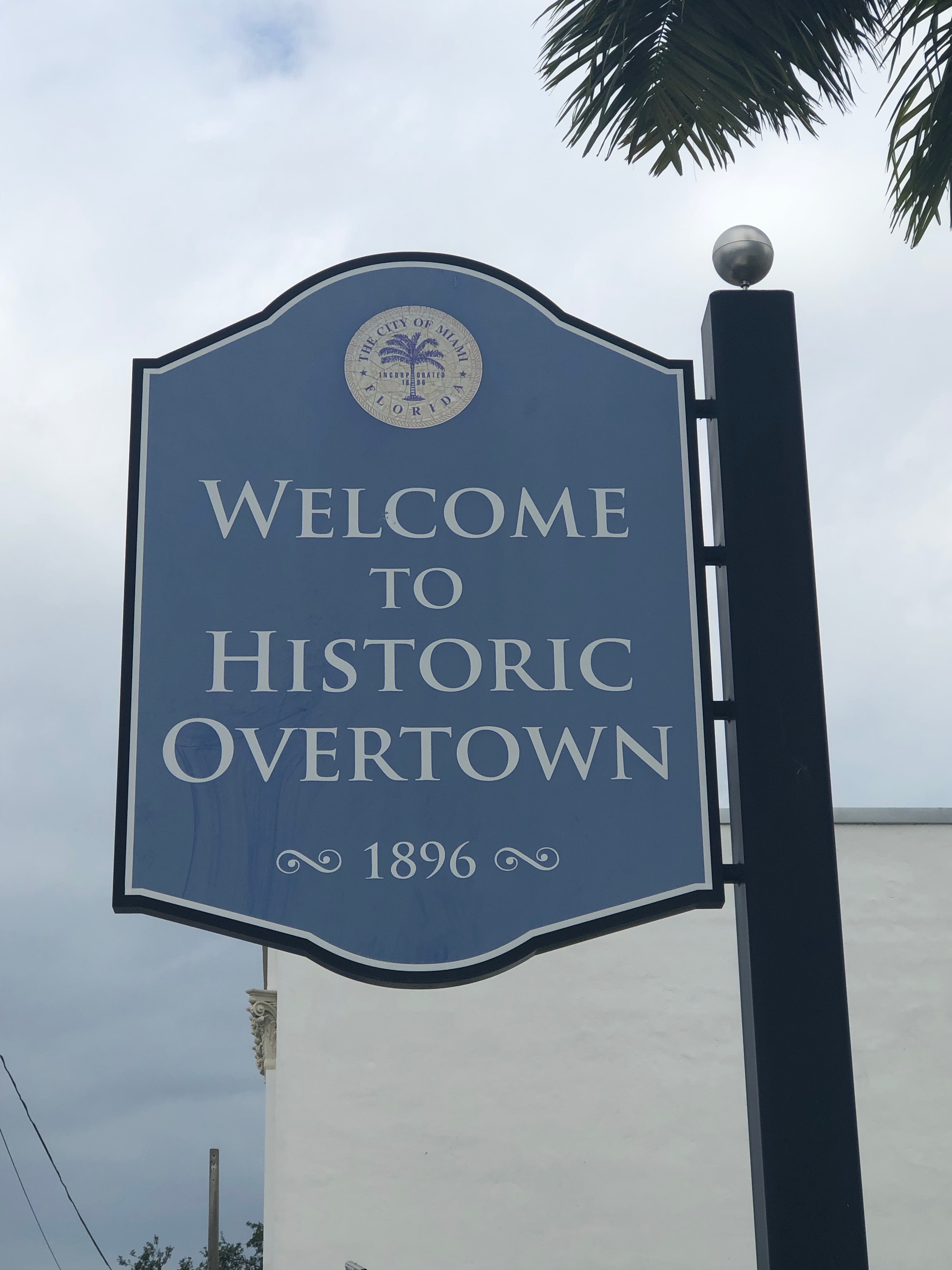 On Sunday I continued my exploration of Miami with a foray into Overtown.

The emphasis here is on ‘historic.’ Today Overtown looks like every other neighborhood in downtown Miami. Full of high rises and construction cranes.

It was originally called Colored Town from the late 19th century through the mid-20th century. It was long a center of black commerce.

In its heyday of the 1940s and 50s it was also a center of night life. Like Miami Beach, it was popular with both blacks and whites. The Lyric Theater anchored the neighborhood. 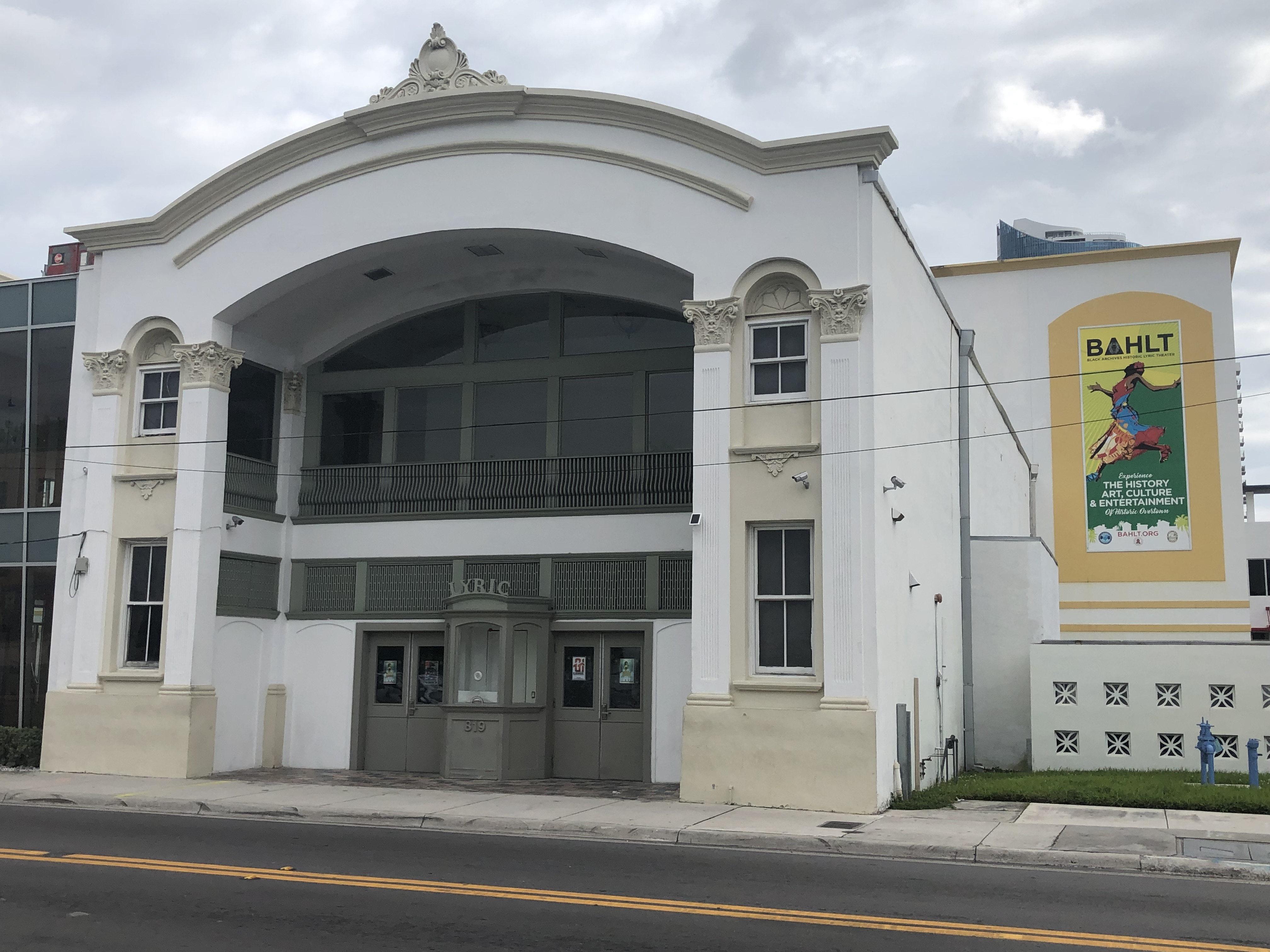 Luminaries such as Count Basie, Ella Fitzgerald, Cab Calloway, Josephine Baker, Billie Holiday and Nat King Cole came to Overtown for rest and relaxation. They weren’t allowed to stay at the big time venues where they performed in Miami. 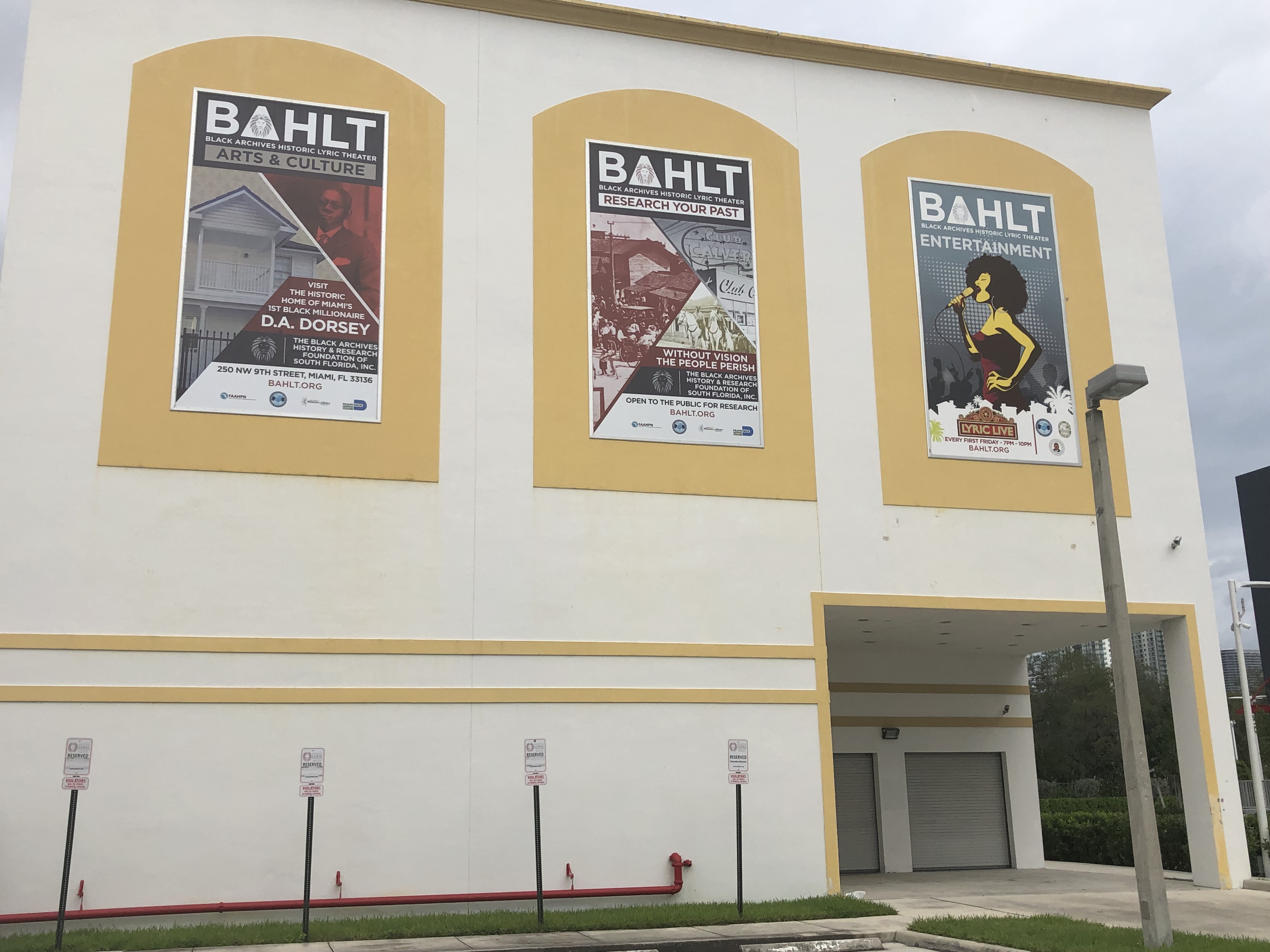 No African-American neighborhood would be complete without an A.M.E. church. Greater Bethel A.M.E. is right around the corner from the theater. 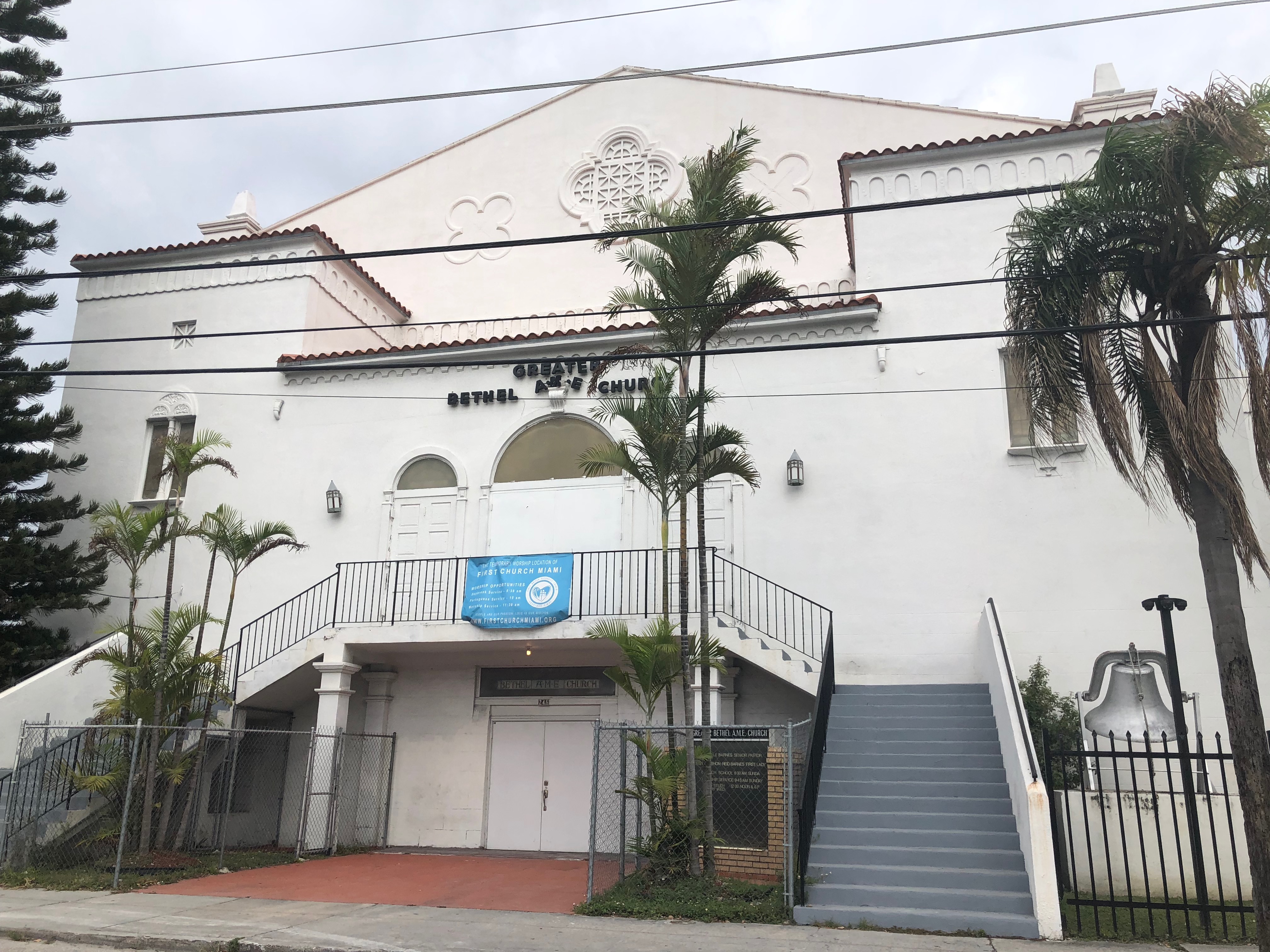 Beyond these two buildings, there wasn’t much to see of the historic neighborhood. So, I just started walking around and happened upon the Brightline train station. I had heard of it and knew it ran to Fort Lauderdale and West Palm Beach. 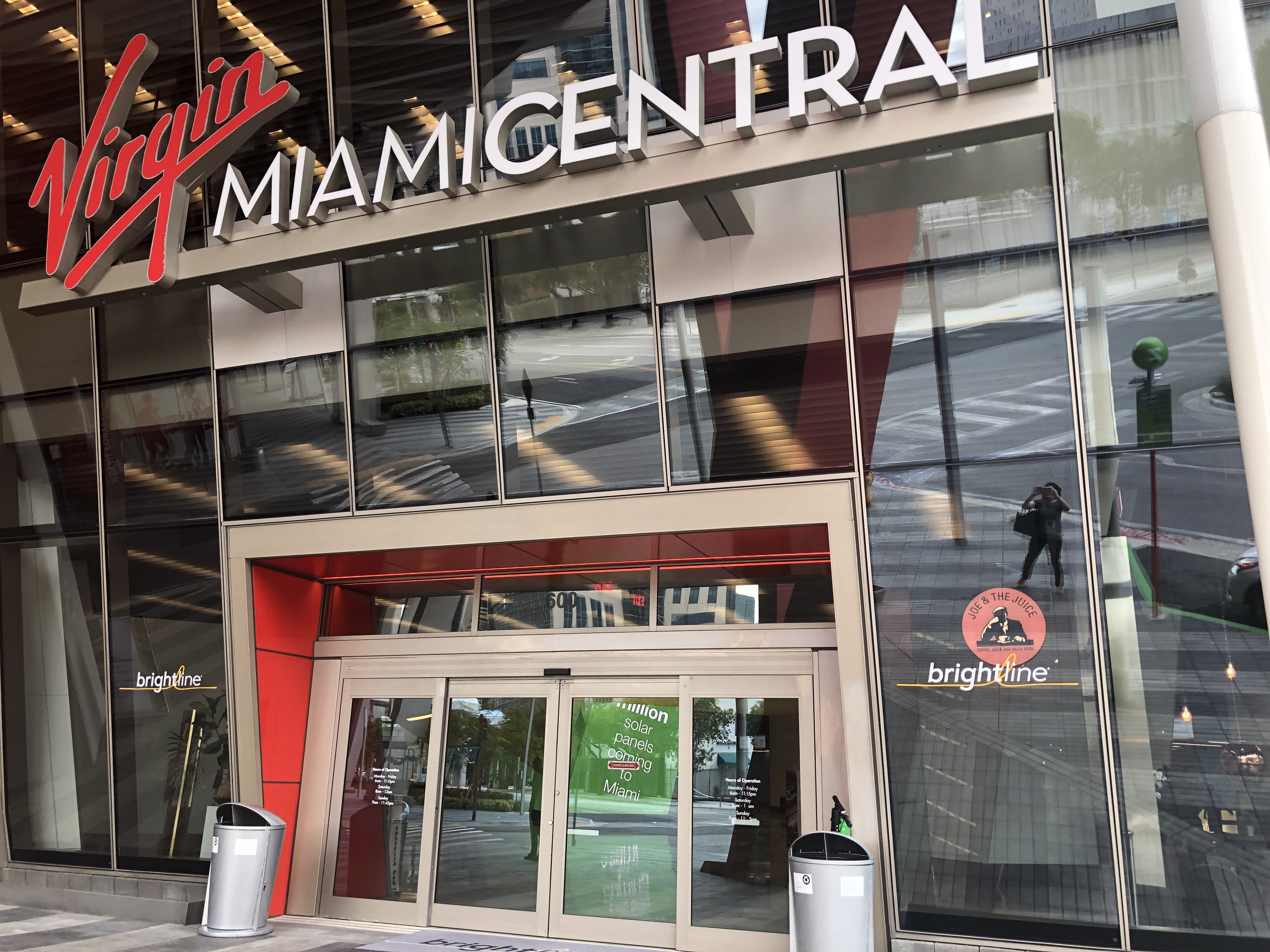 So I went inside where everything is snazzy and new. Although the image, below, does not show it, the color neon yellow predominates: 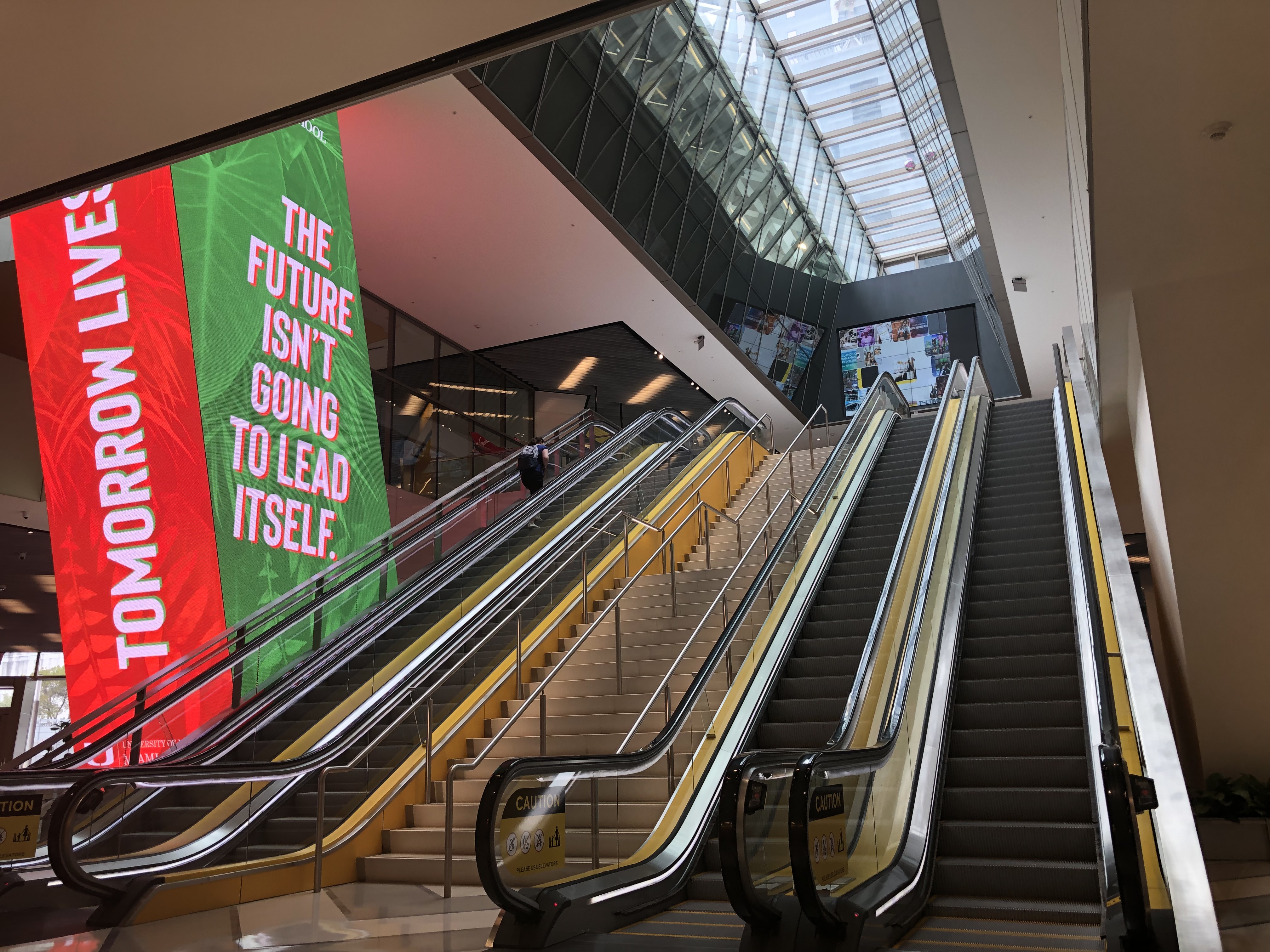 I saw that the next train was in about an hour. So I bought a ticket to Fort Lauderdale – a 30-minute ride.

From Overtown to Fort Lauderdale and Back

What to do? I went to the Fort Lauderdale Beach, of course. Have I become blasé living in Miami these past few months? The beach was nice, but nothing I hadn’t already seen quite a lot.

View to the north: 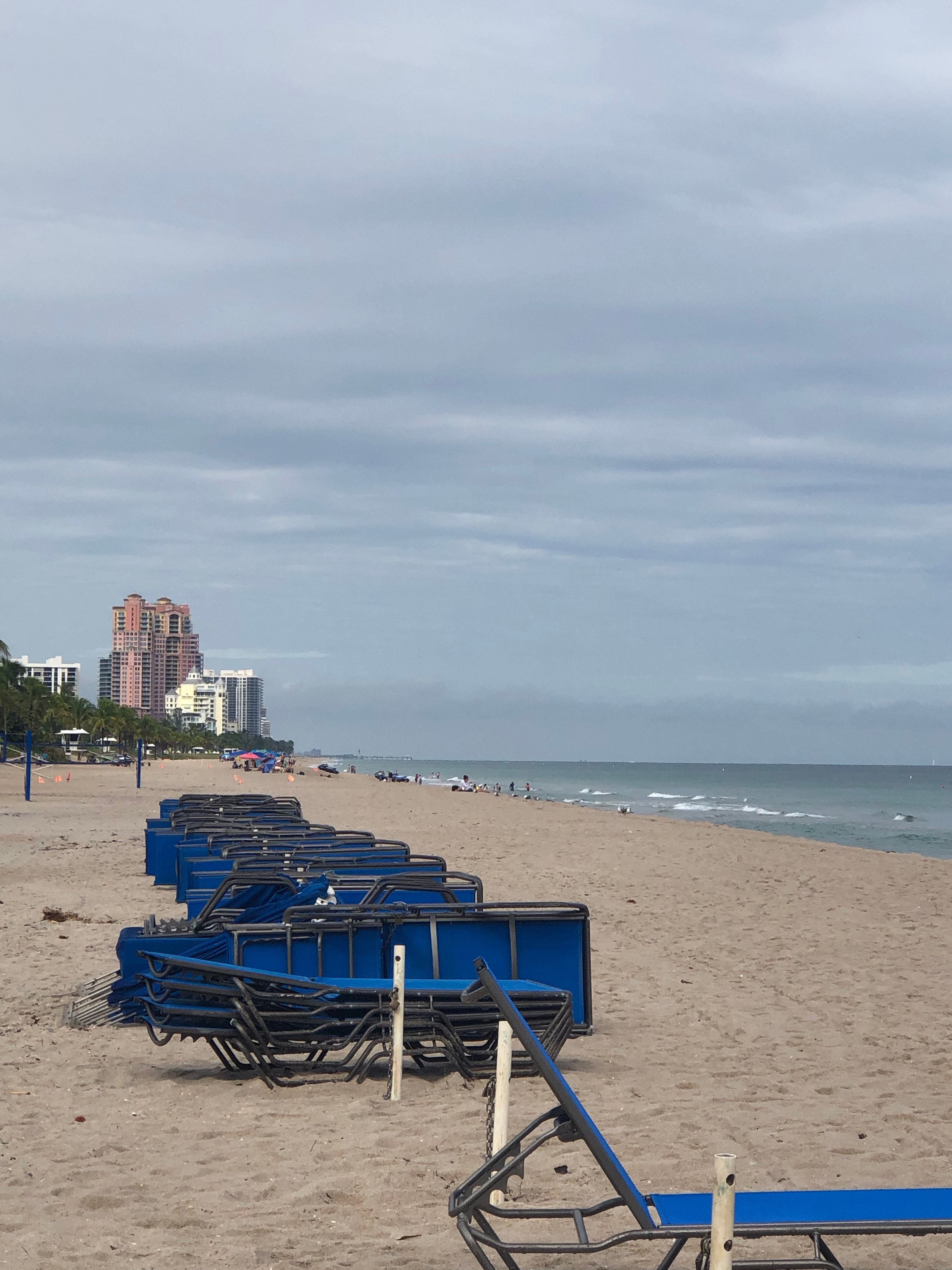 View to the south: 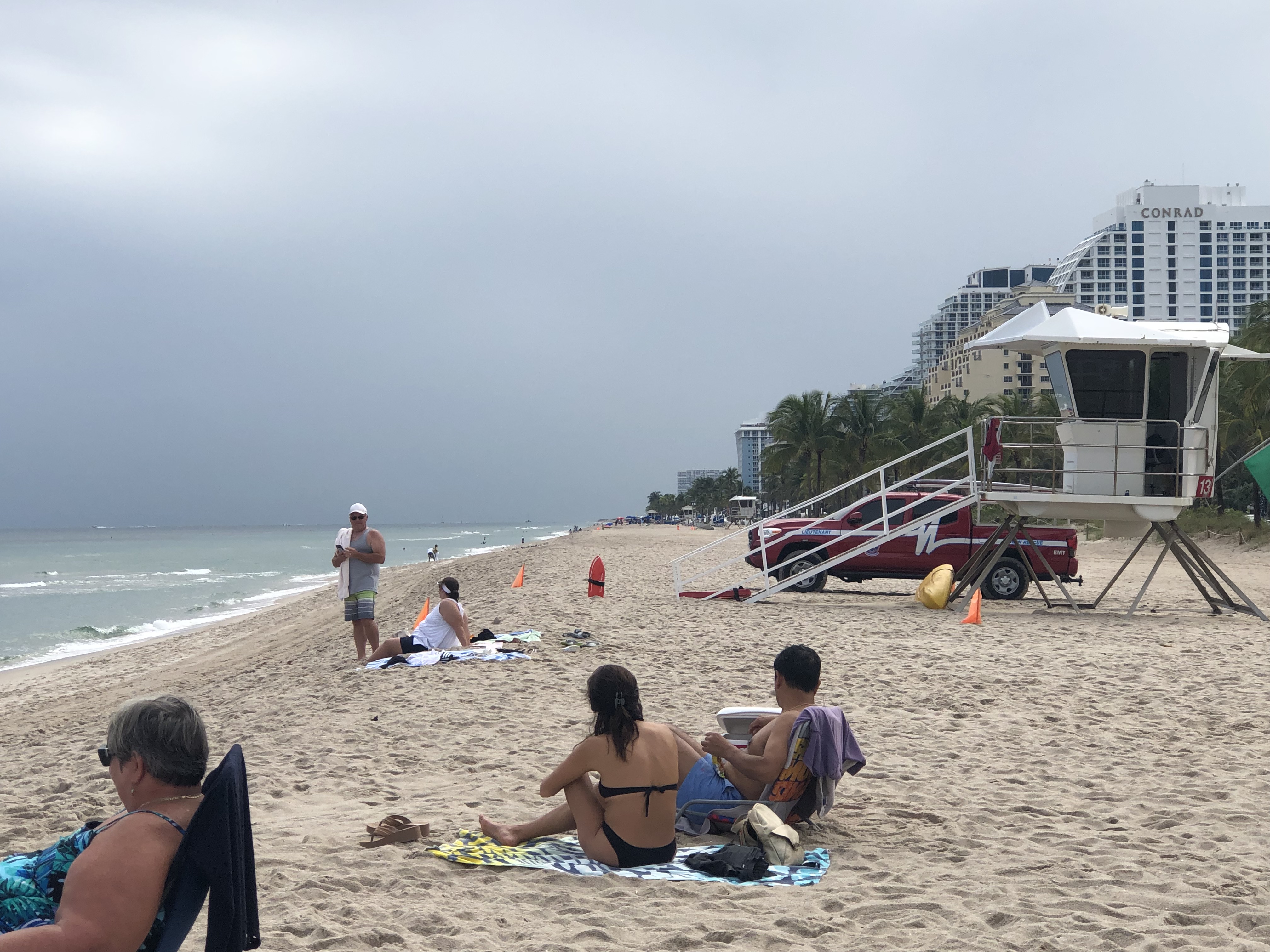 I noticed the license plates from Virginia and Ohio and Quebec. I had to remind myself that it’s late November. What I have become so wonderfully accustomed to really is a treat for those coming from the North. 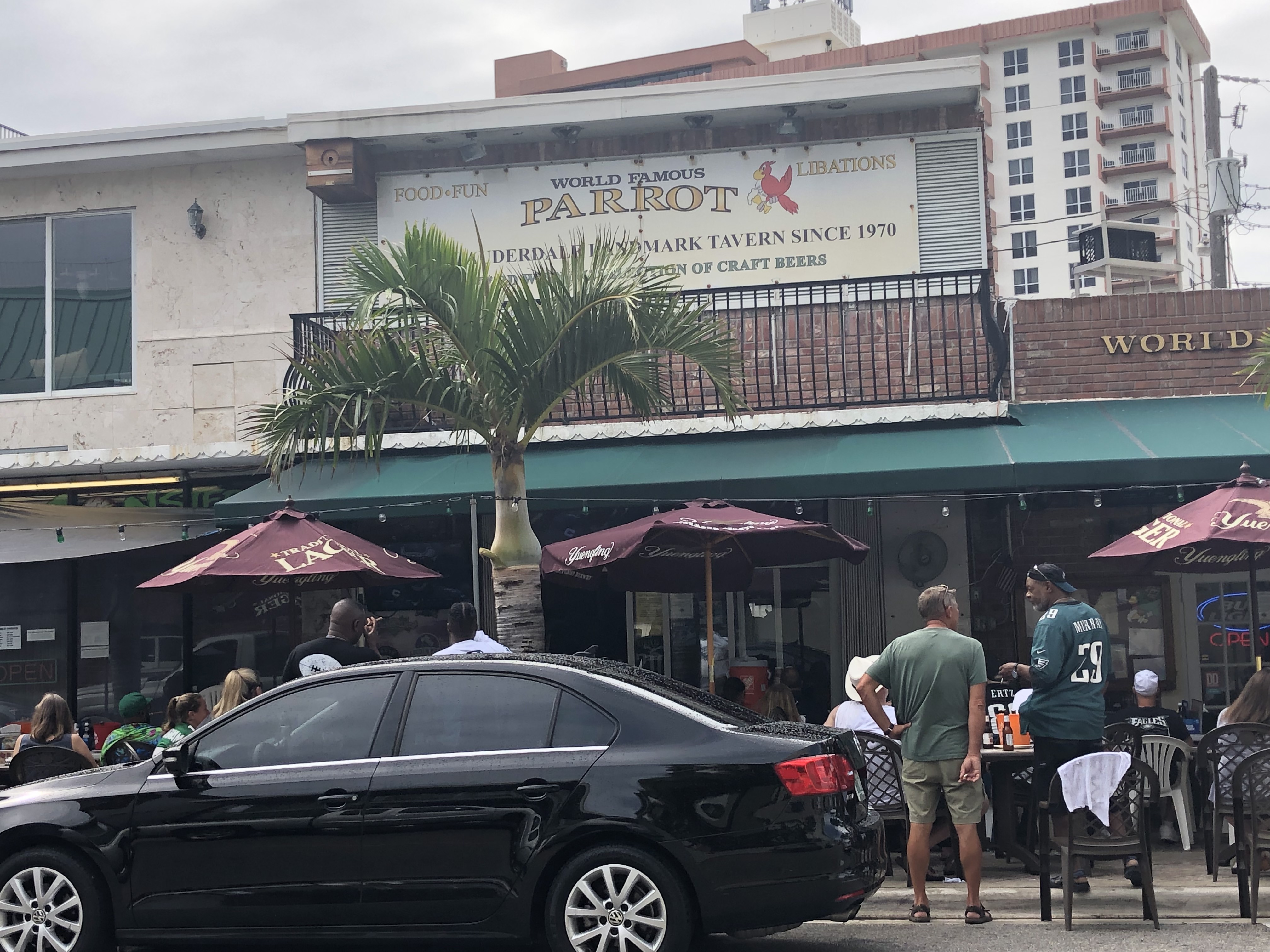 I was more interested in the many canals which are spiked with condos. Yachts, such as the one in the foreground, dot the water. 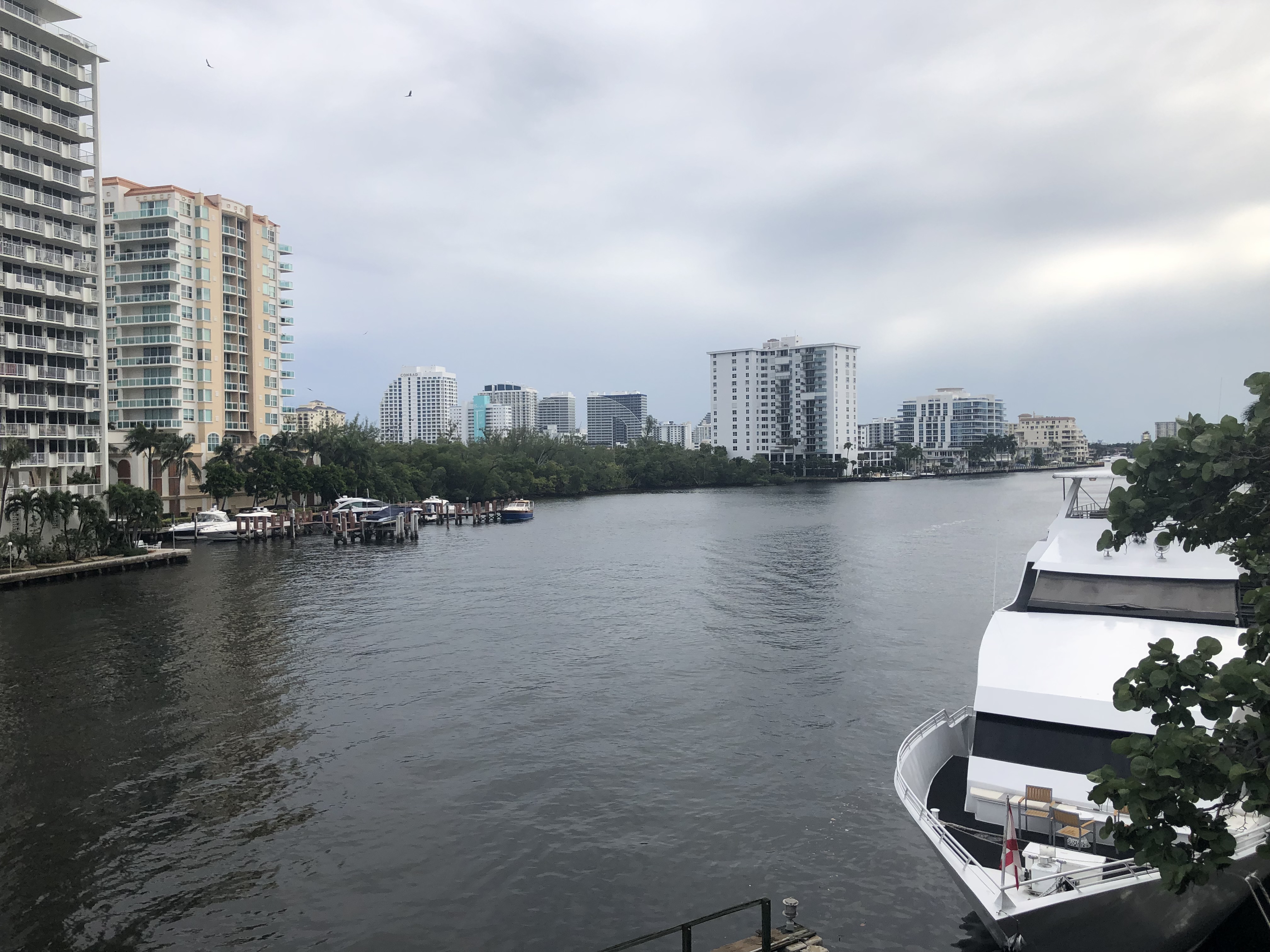 The Riverwalk winds along the New River. 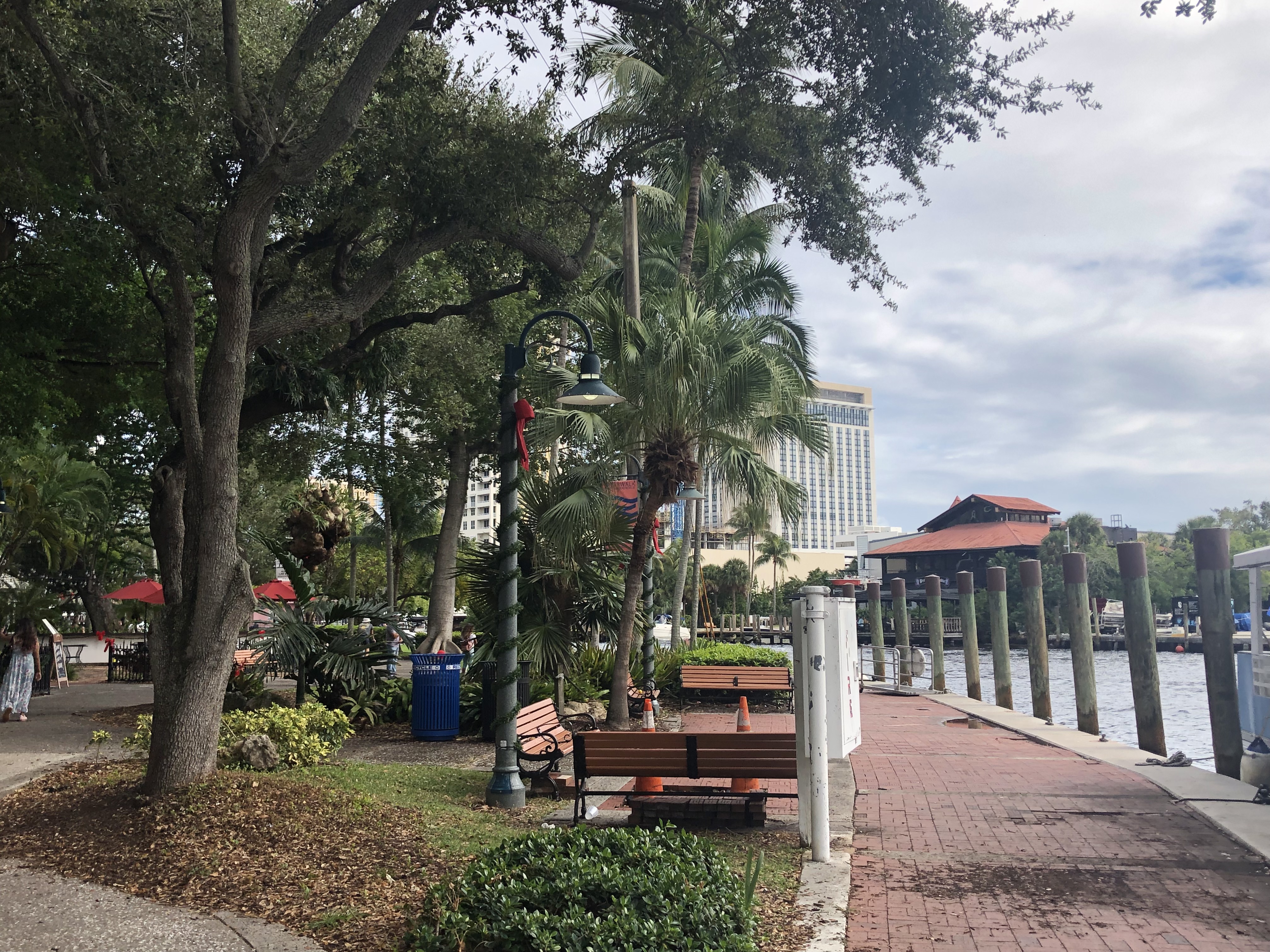 The view of downtown is great. 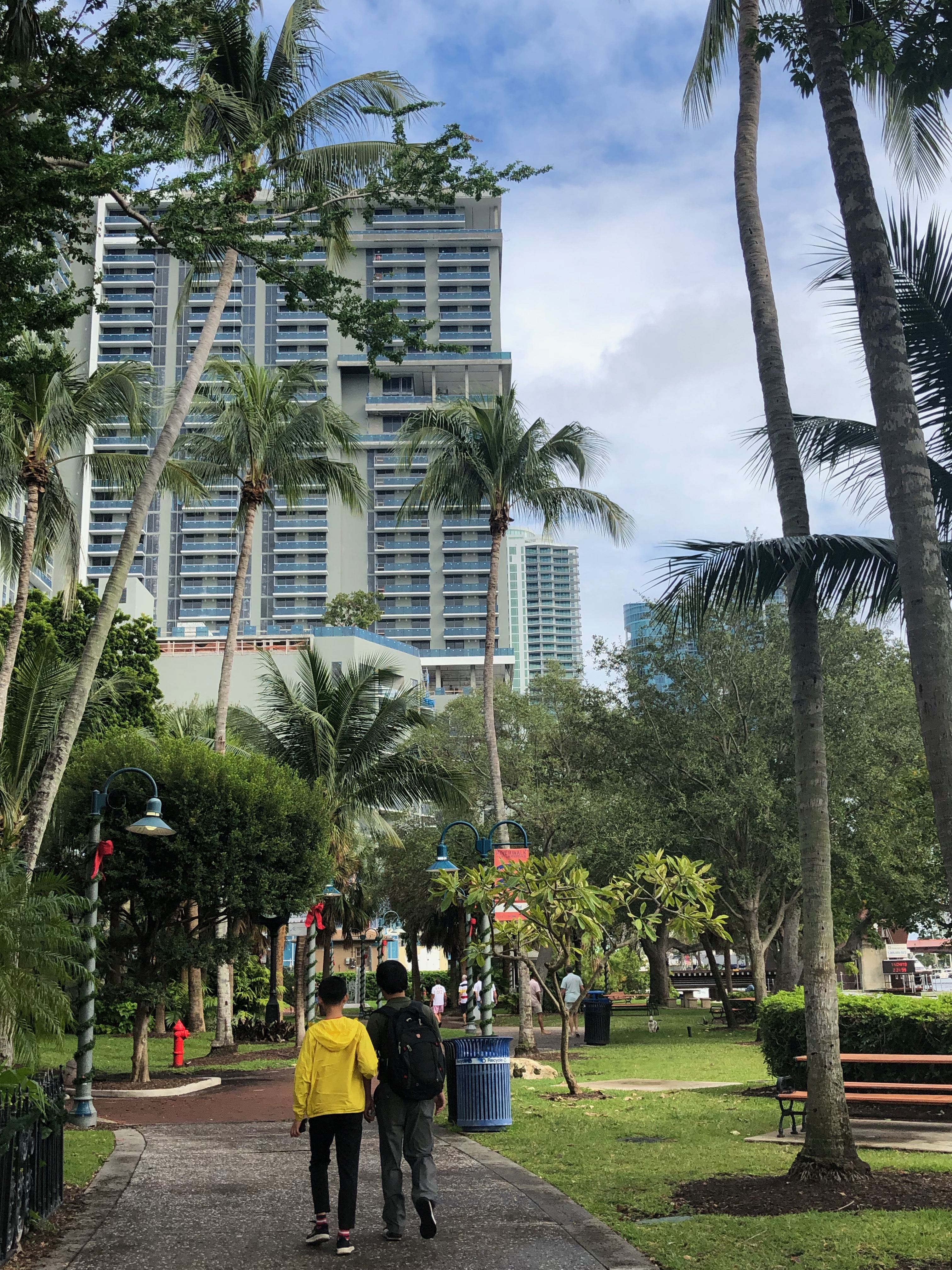 After a few hours I returned to Miami on Brightline. Easy peasy.

Charles Avenue is another historic African-American neighborhood. It is in south Coconut Grove. So I figured if the alpha of my day was Overtown, the omega should be Charles Avenue.

The draw – if one can call it such – is the Charlotte Jane Memorial Park Cemetery. Why? Because it is said to be the inspiration for Michael Jacksons Thriller (1984). Well, okay, this music video is historic at this point.

Even more historic is the fact that it’s a Bahamian cemetery. The Bahamians were the ones who slashed through the jungle that was South Florida as recently as two hundred years ago.

You see that it’s an above ground cemetery. This style is popular in places at or just above sea level prone to flooding.

Also on Charles Avenue is the Mariah Brown Conch House. 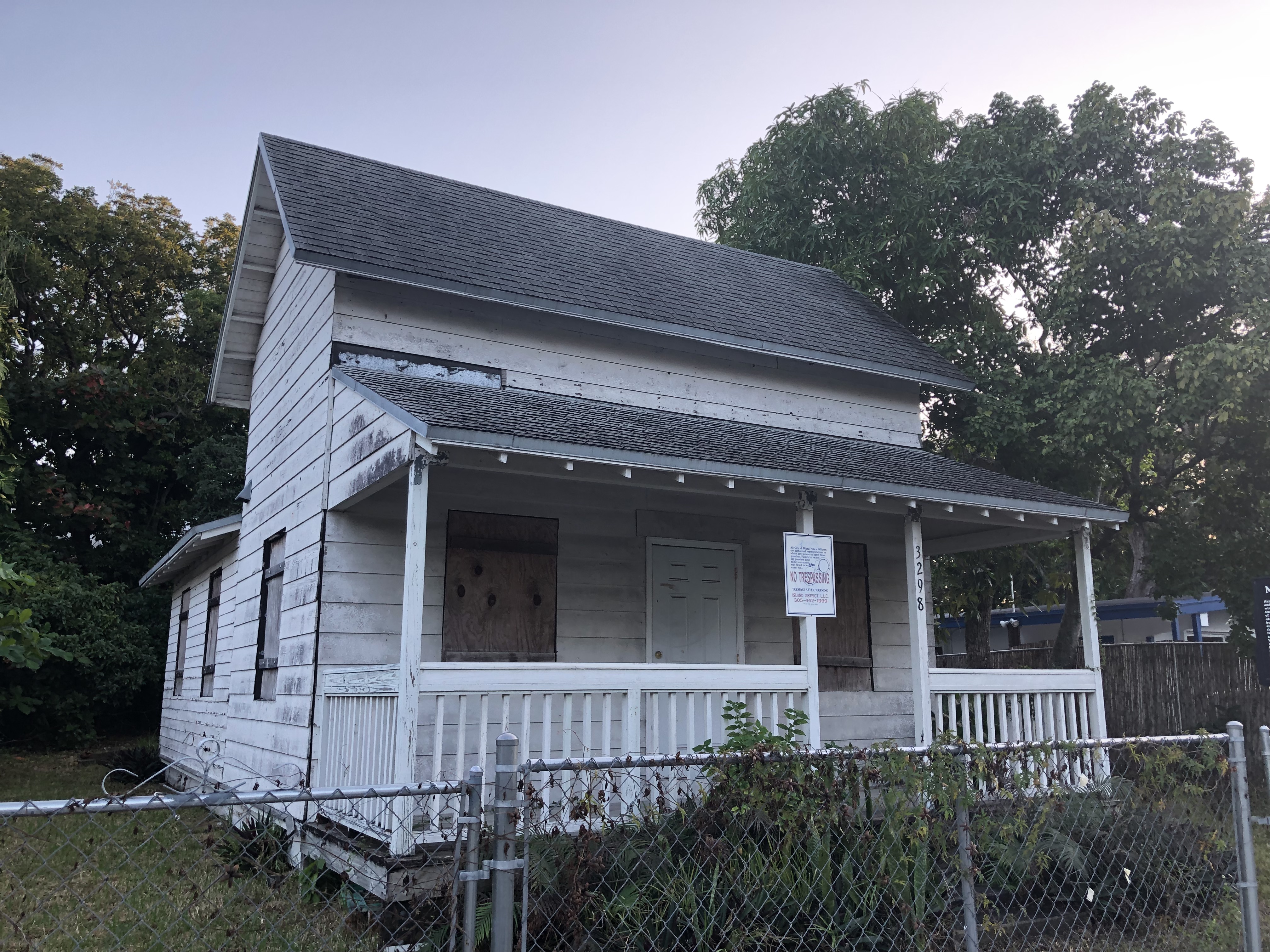 It is also in the Bahamian style. One-and-a-half story wood frame built to protect against heavy rain and strong winds from tropical weather. It is listed in the Florida Black Heritage Trail – and is clearly in need of some TLC.

This blog is a mish-mash of a day I fashioned for myself on a whim. So I may as well end with an oddball observation concerning the sight in Fort Lauderdale that caught my eye and caused me to ruminate. 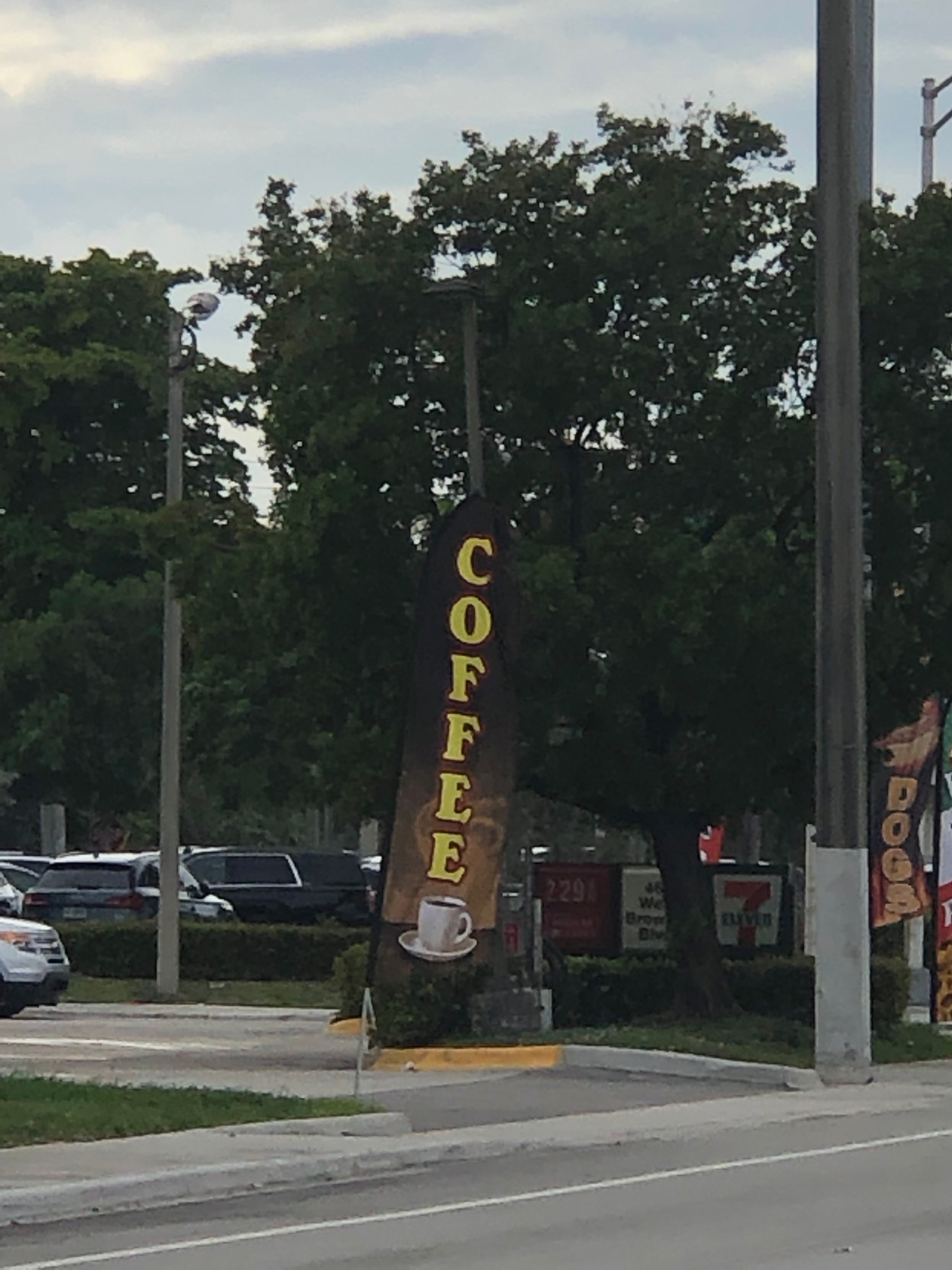 Yes. It confirmed the feeling I had when I saw the sign, below, in Shukugawa, Japan this past April: 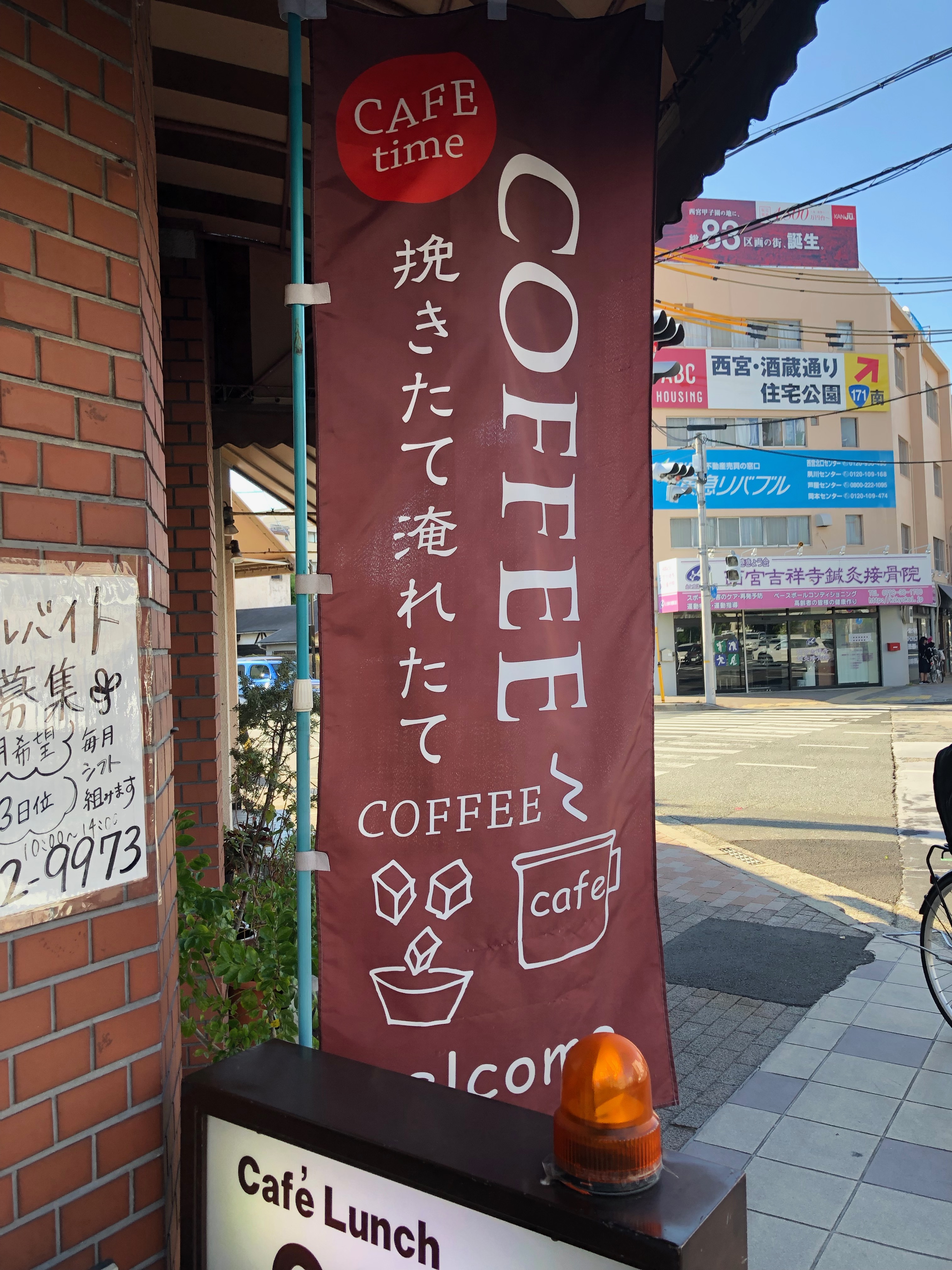 At the time I thought no English speaker would orient the letters C-O-F-F-E-E facing down. And the sign in Fort Lauderdale confirmed my conviction.

Of course, on the Japanese sign, I can see that the words ‘CAFE time’ and ‘COFFEE’ and ‘cafe’ and (partially seen) ‘Welcome’ are written horizontally, as a Westerner would expect. But the orientation of the center stage Latin alphabet letters is what struck me as most interesting. Since the Japanese don’t have a rigidly horizontal relationship to this alphabet, they do what they want when arranging it vertically.

English speakers keep the orientation of the letters horizontal even when arranging them vertically.

Yup. A coffee sign. That’s the big take-away from my day!