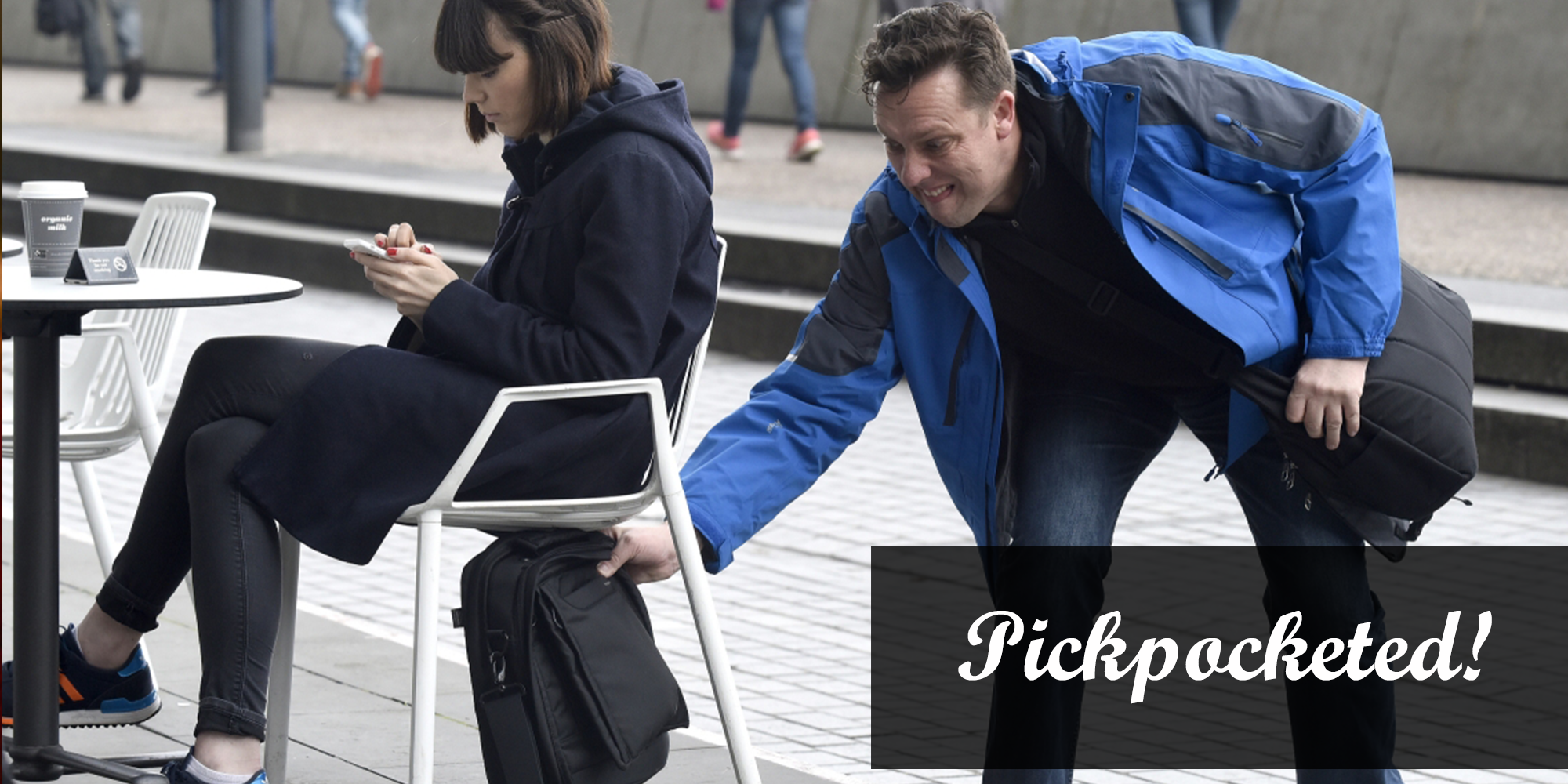 It happened. A couple weeks ago I was pickpocketed in Bucharest, Romania. I was not in as obviously vulnerable a position as the woman in the title image. In fact, I thought I was doing everything right, and yet ….

I had gone to the ATM and made a withdrawal before meeting a friend for lunch. I got to the restaurant first and chose a table next to a wall with no one behind me and a view of the front door. I sat down and put my purse on the floor beside me by the wall.

Only when I went to pay an hour later did I notice my wallet was gone. Then I had to piece together what had happened.

Not long after I arrived at the restaurant I remembered a man sitting down behind me – but he did not walk past me to get to his table. He must have walked around the perimeter of the inside to sit behind me without me noticing him. I remembered feeling something jostle at my back, looked down and saw that his black nylon sack had fallen down beside my purse. When he picked it up, I shoved my purse under the table rather than leaving it next to me.

In that one second of contact of his sack with my purse he was able to get my wallet – and I didn’t even notice. These guys are professionals. I am sure he targeted me the ATM, which was less than a 100 yards from the restaurant.

Although this happened in Romania, I wasn’t “on the road” because the restaurant is in the Bucharest neighborhood where I have lived every summer for the past 10 years. Still, it happened while I was outside the US, and so losing both my credit card and American ATM card could have been big problems. Fortunately for me they weren’t.

Here are the steps you can take to minimize the pain of being pickpocketed while abroad: Good for me for following #1 – 3. However, I think if I had followed #4 I wouldn’t have been pickpocketed in the first place. And it’s such a simple step!

Even with all the privacy features of outside ATMs and even without being overt about putting the money in your wallet, the extra effort to go inside the bank suggests to the person hanging around the ATM, looking for a mark, that you have another transaction to make. The pickpocketer will lose interest in you and target someone more  accessible.

What have I changed as a result of my experience? It was long-ish and fat-ish, and I liked the way I could reach into my purse and easily find it. Oops! I have a purse that does fasten with a magnet clasp, but still I can see why a pickpocket would have assessed my set-up and figured I’d be good for some quick cash.

Now I have this wallet: It’s about 3″ x 4″ and I keep it inside a zippered pocket in my purse. It’s more cumbersome to zip and unzip when I need it, but then again it’s not easy to be pickpocketed.

Now all I have to do is not lose my entire purse.