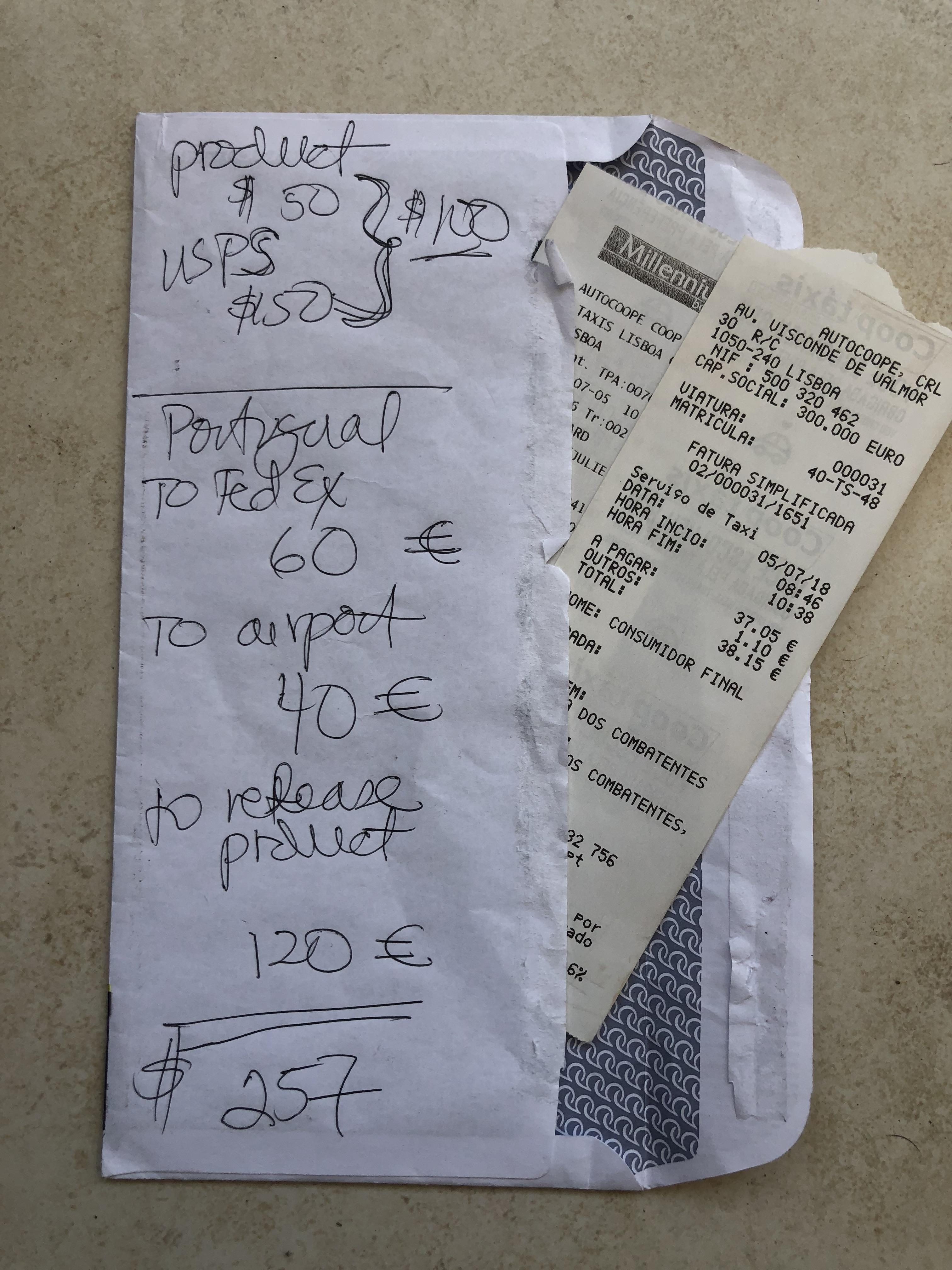 Portuguese customs: I’m not talking about their Christmas cakes or the songs they sing. Nothing so interesting! No, I’m talking about trying to get a package from back home through international customs.

Travel Tip #1: Don’t bother having anyone send you anything. You’re likely to spend undue time and money replacing specific products.

The subtitle to this blog is: How many ways can I get a thing wrong at once?

On the Thursday before leaving Luanda, it was greatly apparent that our luggage had been stolen. Our flight out of Angola was for Sunday morning headed to Lisbon. So I thought, “Okay, I’ll email my son in the U.S. and on Friday he’ll overnight me a few products to my hotel in Lisbon. I’ll pick them up on Monday or Tuesday and then be on my way to Romania.”

As a further cleverness, I decided that since the products were in three different categories, they should be sent in three different boxes. This, I thought, would be less confusing to customs officials. And therefore more likely for them to breeze through. One of the categories was … vitamins. Okay, what was I thinking? Like there aren’t vitamins everywhere in Europe?

Now back up to the previous assumption that separating categories of goods into different boxes had anything to do with anything. This idea was based on absolutely nothing. But, I suppose, once your (my, anyway) thinking starts going in a certain direction it’s hard to self-correct.

What made me think that receiving products in Lisbon would be easier than in Bucharest. That was where I was going to settle for a while? This idea was also based on absolutely nothing. And I note that I had never even been to Portugal.

I also apparently forgot I don’t speak Portuguese but I do speak Romanian. So the prospects for receiving packages that might have any problems at customs would be easier to solve in Romania than Portugal.

Then, too, I have a condo where I live for free in Romania. I would have to pay for a hotel in Lisbon long-term in case there were any delays.

Long story short: I left Lisbon the next Saturday with only one out of three packages in hand.

My son sent the packages through the USPS using international express. One arrived on Tuesday and got stuck at customs. On Wednesday it finally dawned on me that the only way to get that package through customs was to work through the paperwork myself.

It turns out in Lisbon you have to go three different places (and one of the places you get to go to twice!):

First, you have to go to a FedEx office way the heck out in a suburb of Lisbon to get a signed document concerning your package.

Second, you take the document to the FedEx office at the airport to get another document.

Third, you take the FedEx airport document to customs … which is located on the exact opposite side of the airport, easily 10+ kilometers away. You work through the maze at customs, then wait while they figure what the customs fee will be on your package, and then pay whatever they tell you.

Fourth, you go back to the FedEx airport office, and they give you your package.

Given the distances between offices and the wait times at most of them, it is impossible to do all four steps in one day. I got my first package Thursday. Here is the bouquet of paper I have as a result: 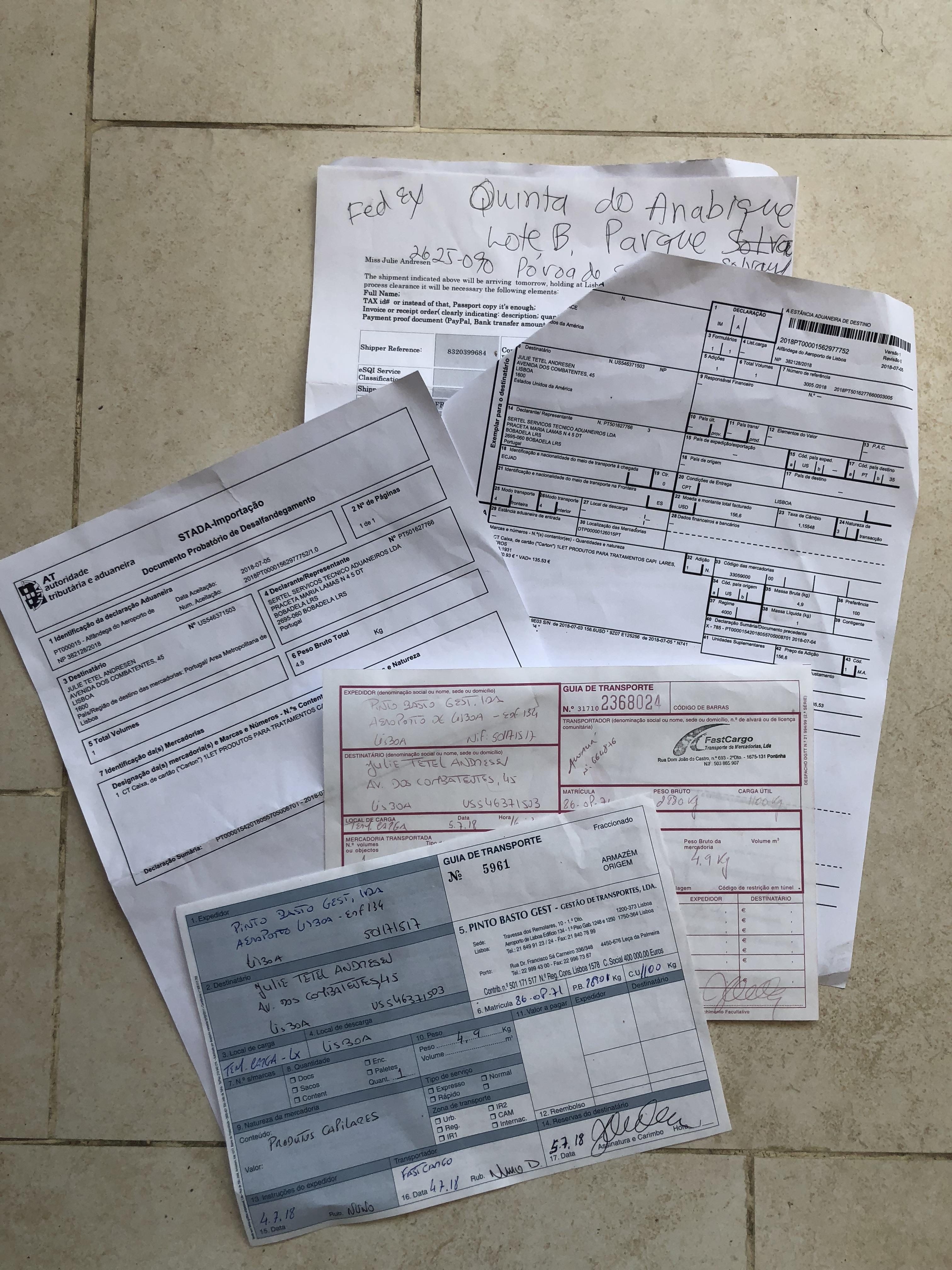 The title image tallies the costs of what I spent to receive about $50 of products from the US, which included 100€ just on taxis and another 120€ in customs fees,  and I’m not even counting the cost of staying in a hotel. So, I cut my losses on the other two packages.

On Medication: In talking about this incident with various people they have asked me what you’re supposed to do if you have medication, and the medication is in the luggage or carryon or whatever that is lost or stolen.

Travel Tip #2: Travel with not only with the product name of your medication but also its chemical composition. In many places in the world, access to a doctor is much easier than in the US. You will pay for that access, but it will likely be far less money – not to mention time and effort – than mucking around with getting medicine through customs. A good hotel may even have a nurse on staff as an opening into the medical system. 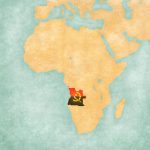