Public Speaking. Really, what I’m talking here is about speaking in public.

In my years of teaching, I have always gone early to class to chat with students before the hour begins.

I haven’t had difficulty getting conversation going until these past few years. Now when I walk into the room, I have to find a way first to engage the attention of the students who are there early. I can’t enter into an already on-going conversation with them because they’re all flipping through their phones.

Same for their behavior on the buses on campus. No public speaking, that is, speaking in public.

Hence my interest this semester in creating a course that examines face-to-face conversation in situations as different as a cop on her beat or a politician in his campaign. It’s about pubic speaking – and speaking in public.

Here are the first paragraphs of my course description:

Social media has power to communicate, but its power is limited. Social media cannot defuse a dangerous situation on the street, give a persuasive political speech, coach a team to victory, convince investors to put their money in a start-up company, motivate a work force to higher productivity, or close a deal.

Only individuals in live communication can affect the real-life, real-time behavior of other people. In other words, effective oral communication is the key to success in a wide array of professions. It is also the key to great leadership.

This week our topic is public speaking in politics. We’re reading George Lakoff’s Don’t Think of an Elephant! Lakoff’s discussion centers on the concept of frames, those mental structures that shape the way we see the world.

They are, in fact, the most important brain structures that shape our politics. Frames are not necessarily the direct content of messages; rather, they are the latent structures for interpreting the content.

For instance, the phrase tax relief frames taxes as an affliction. The two-word phrase invokes the idea, without stating outright, that taxes are a burden.

Alternatively, a banner over a public project Your tax dollars at work! frames taxes as an investment in the future. Your tax dollars at work! got us our interstate highway system, our scientific and medical establishments, our communications system, the Internet, our airline system, our space program, our public schools and universities, which are all things we need – not relief from.

Whatever your point of view, Lakoff argues, you need your frame to be in place in order to be understood. If you believe in taxes as investment in the future, you shouldn’t say “We don’t need tax relief” because you have accepted the frame of taxes as a burden. You have to put your frame in place first: “Today we have assets – highways, schools, airlines – that come from the wise investments our parents made in the future.”

Another way of saying this is: the brain does not register a not. It registers the frame of the not. Nixon’s saying “I am not a crook” accepts the frame that he’s a crook.

Like the rest of the world at the moment, I can’t resist mentioning Donald Trump. He has framed Jeb Bush as “low energy.” Bush has made some tentative statements to the effect that he has energy – but no amount of protestation on Bush’s part will work, because the moment he comments on his energy he has accepted Trump’s frame.

In the second debate, when Bush went after Trump at one point, Trump said, “Hey, you’re showing more energy. I like that.” Bush was momentarily speechless – and with good reason. Trump had reactivated the low energy frame very cleverly by attributing more energy to Bush.

Bush must reframe himself if he’s going to get ahead in the polls. It remains to be seen what his new ad blitz will do. 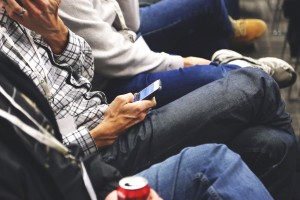 Back to the class. I’m enjoying it, as well as the students in it. When I asked them why no one talks to one another on the bus anymore, they all said that, given their busy schedules, they need the bus rides to catch up on email.

I don’t see why the bus ride can’t be time for catching up on socializing – a time for public speaking, that is, speaking in public.

See also: The Articulate Executive I