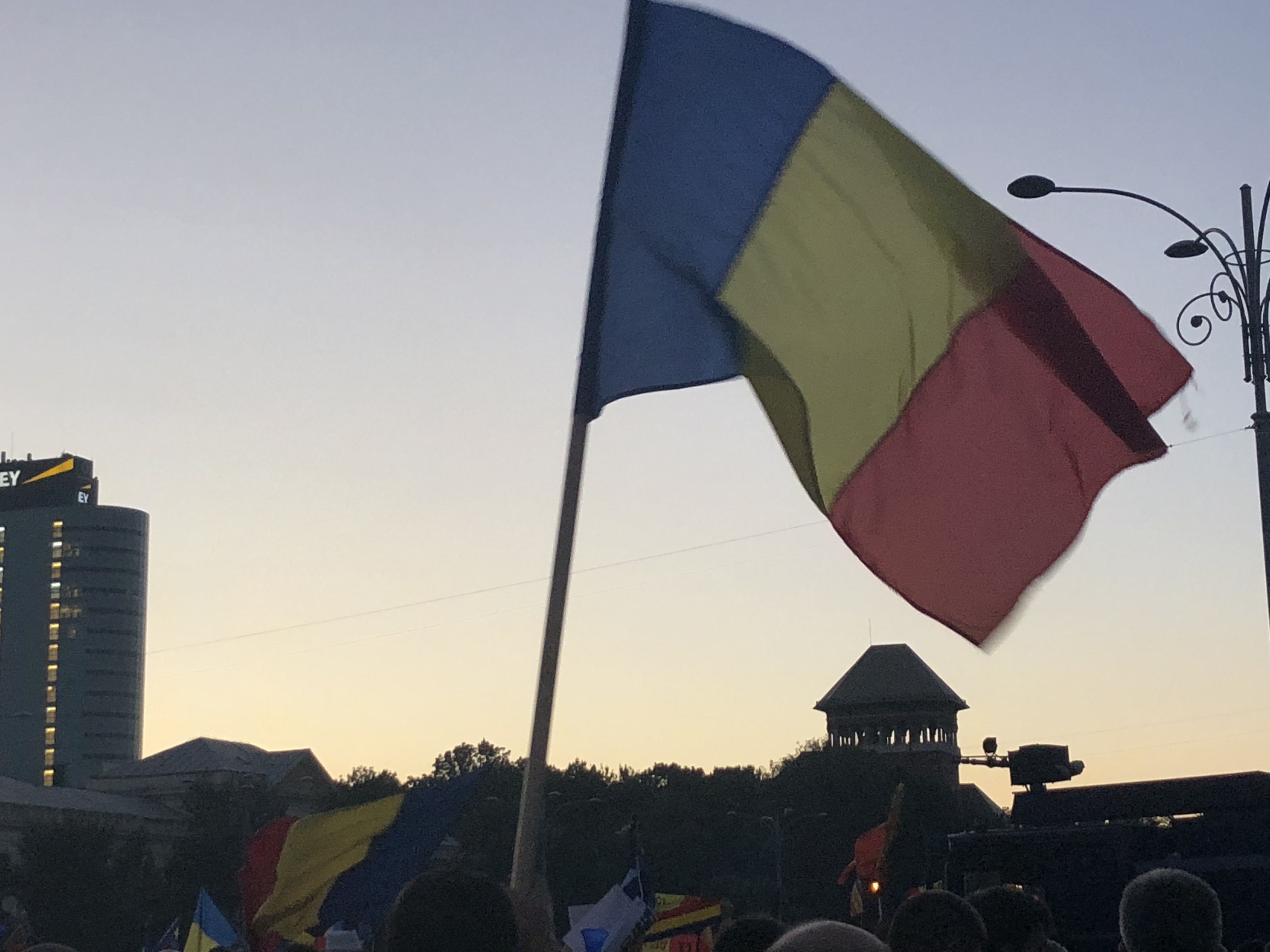 After Lisbon I got myself to my condo in Bucharest … and found a few clothes in my closet, so that was nice. I dove right into life here. Last Friday, August 10, the Romanian Diaspora organized a protest. The diaspora is comprised of some millions of Romanians who have left the country to live in places like Australia, the United States, Canada, and many European Union countries. Over the past 10 years they have become a political force.

Piața Victoriei, in the lower left of the map below, is the site of the main government building. The title image for this blog is the Romanian flag against the evening sky fluttering above a tower of the Muzeul Țăranului Român in the background. The museum sits on the Kiseleff side of the piața. 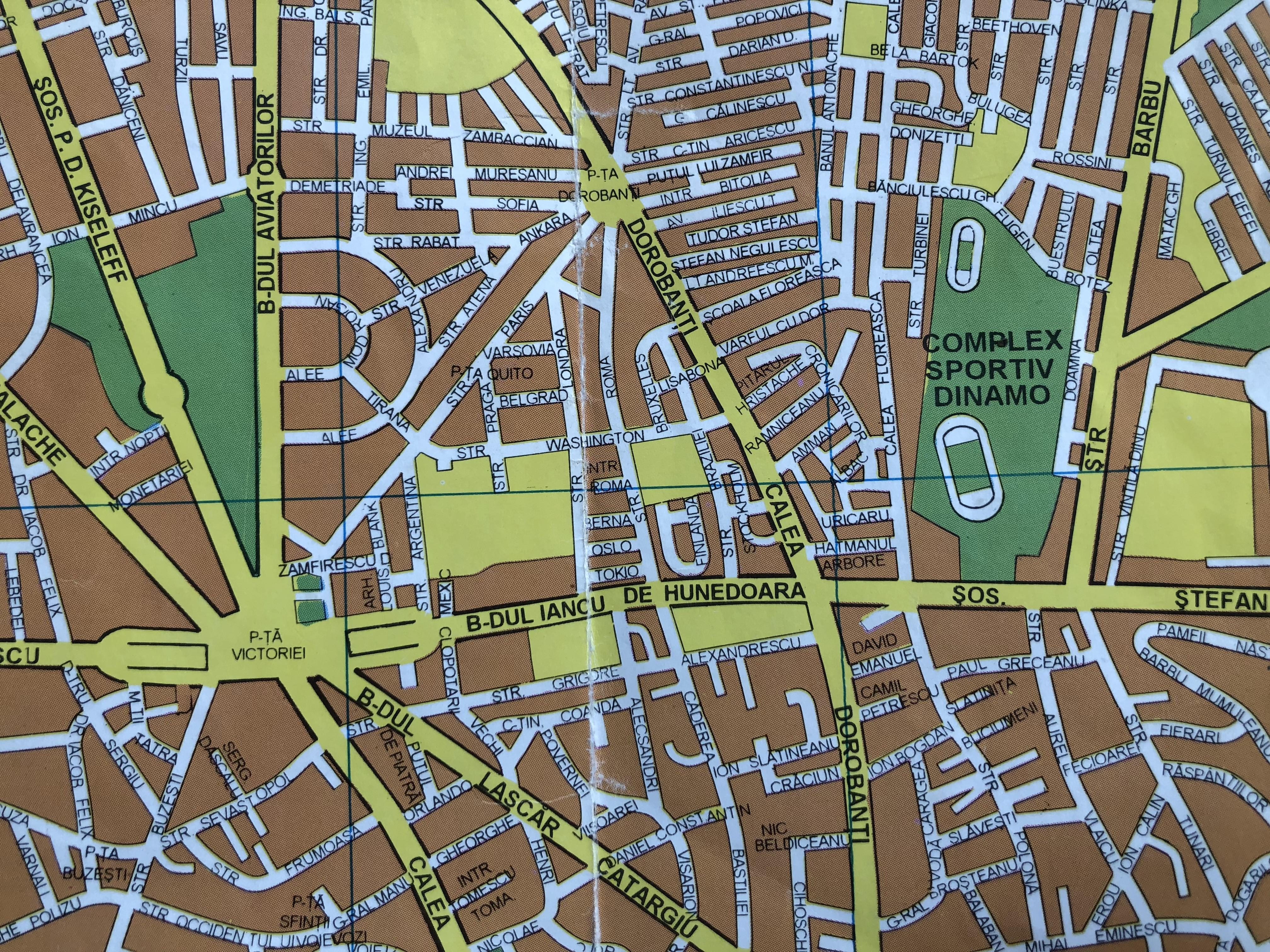 I live on Piața Dorobanților which is in the upper center of the map and connects to Piața Victoriei by Strada Paris.

Romanian Diaspora: Leading up to the Protest

I was at Delia’s house last Friday and we were watching the news. It was around 6:00, and we were going out to dinner at 7:00. All channels had images of Piața Victoriei. The protest had been announced for weeks. There were about 1000 people on the piața, and I commented, “Gee, there don’t seem to be many people at the protest.” Delia’s reply was, “It’s early.”

That’s when it dawned on me that protests in the U.S. take place on a Saturday. They tend to begin at 8 or 9 am and end around 6 pm. In Bucharest the Friday protest began in earnest around 8 pm.

I got the sense of things when I left the restaurant we were eating at on Stada Tunari (lower right on map) and turned onto the main boulevard Ştefan Cel Mare, which merges into Hunedoara and goes straight to Piața Victorei. There was an unusually large crowd of people on the street, all heading in one direction. 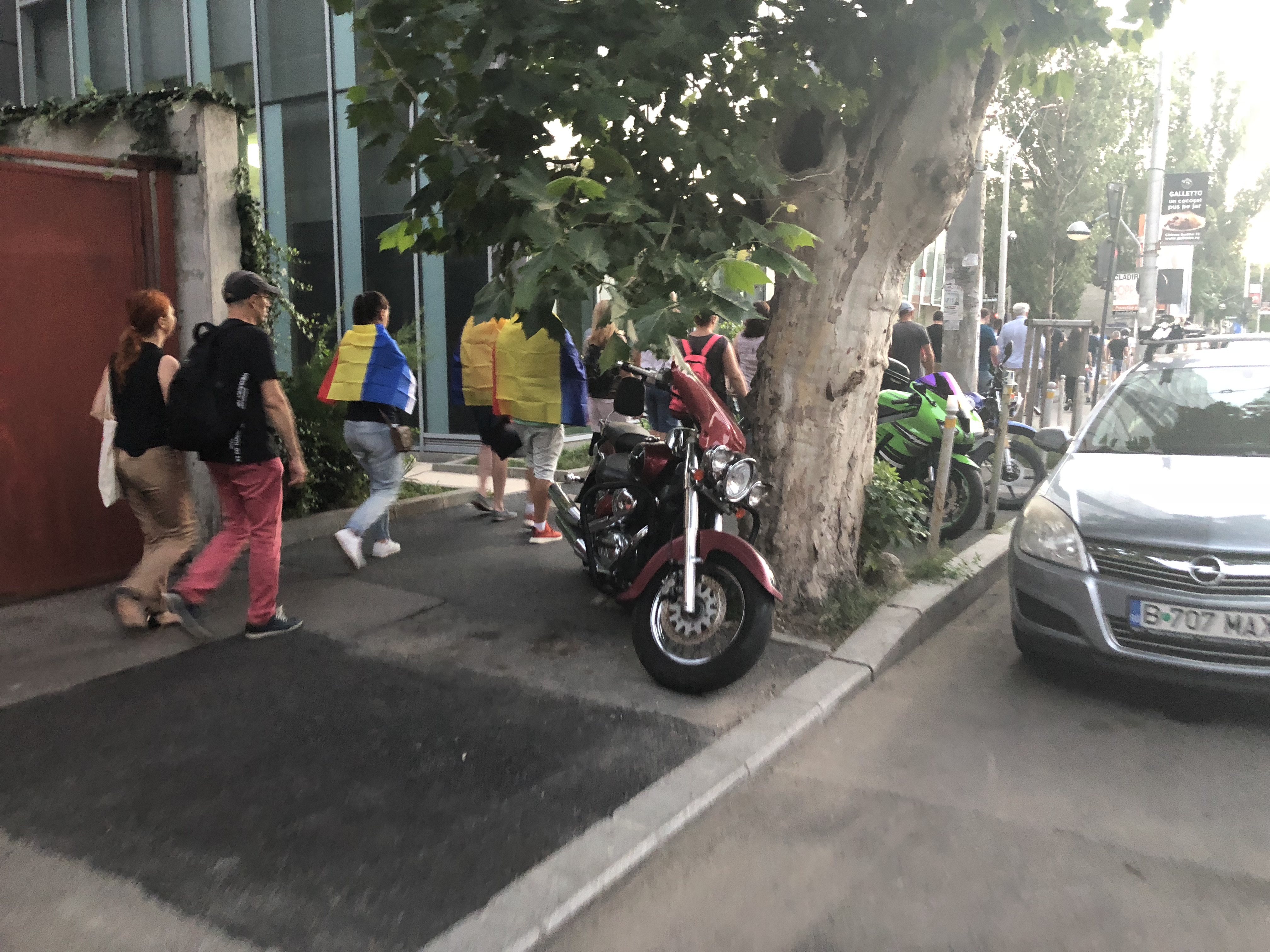 The guys draped in Romanian flags were the give-aways.

So I joined the crowd.

Traffic was stopped for quite a few blocks before the piața and, of course, there hadn’t been cars going through the huge intersection for many hours. 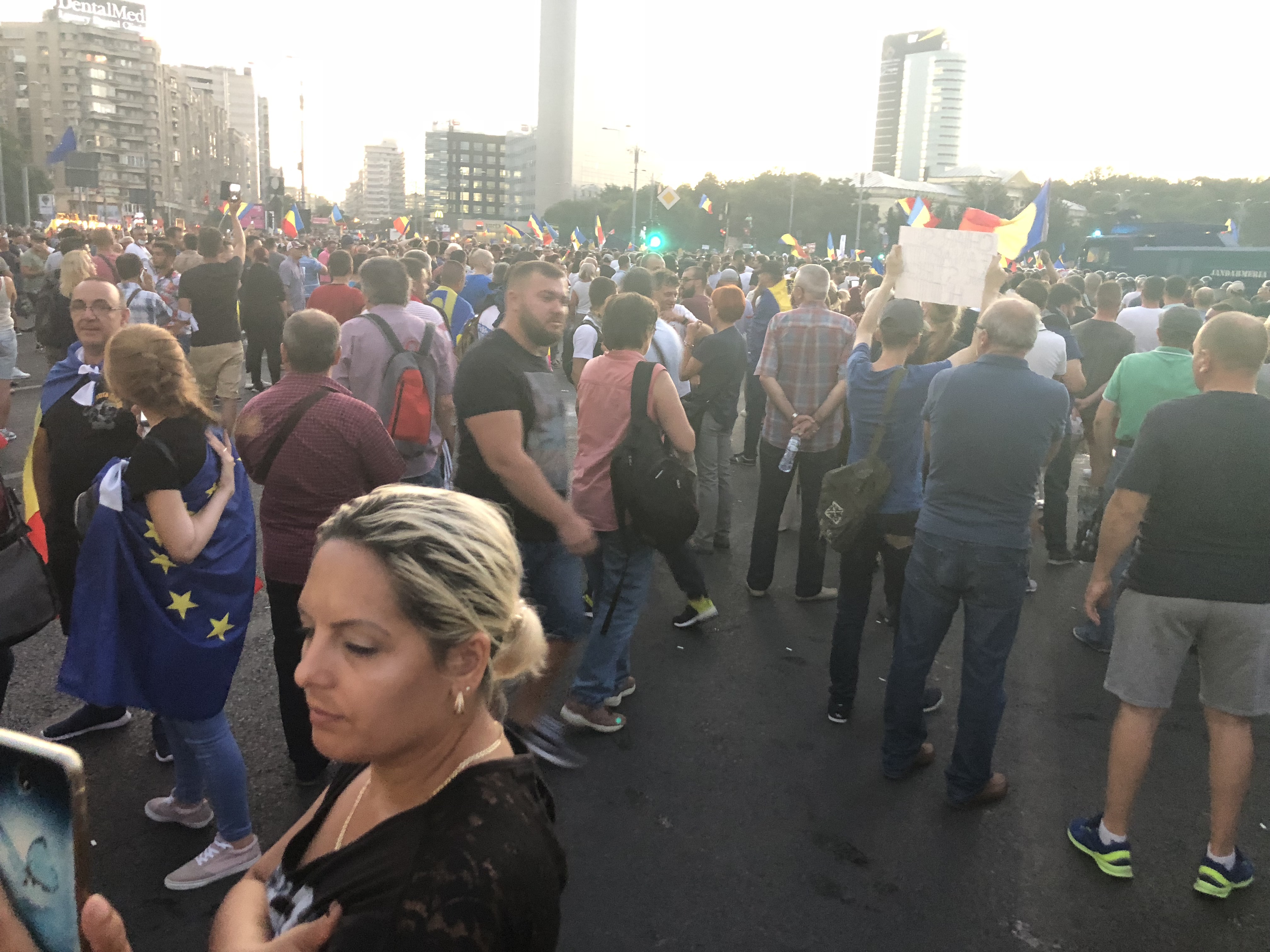 The traffic lights were still working! I like that the one in the middle background was green.

As noise-makers, vuvuzuelas were the order of the day. Whistles, too. 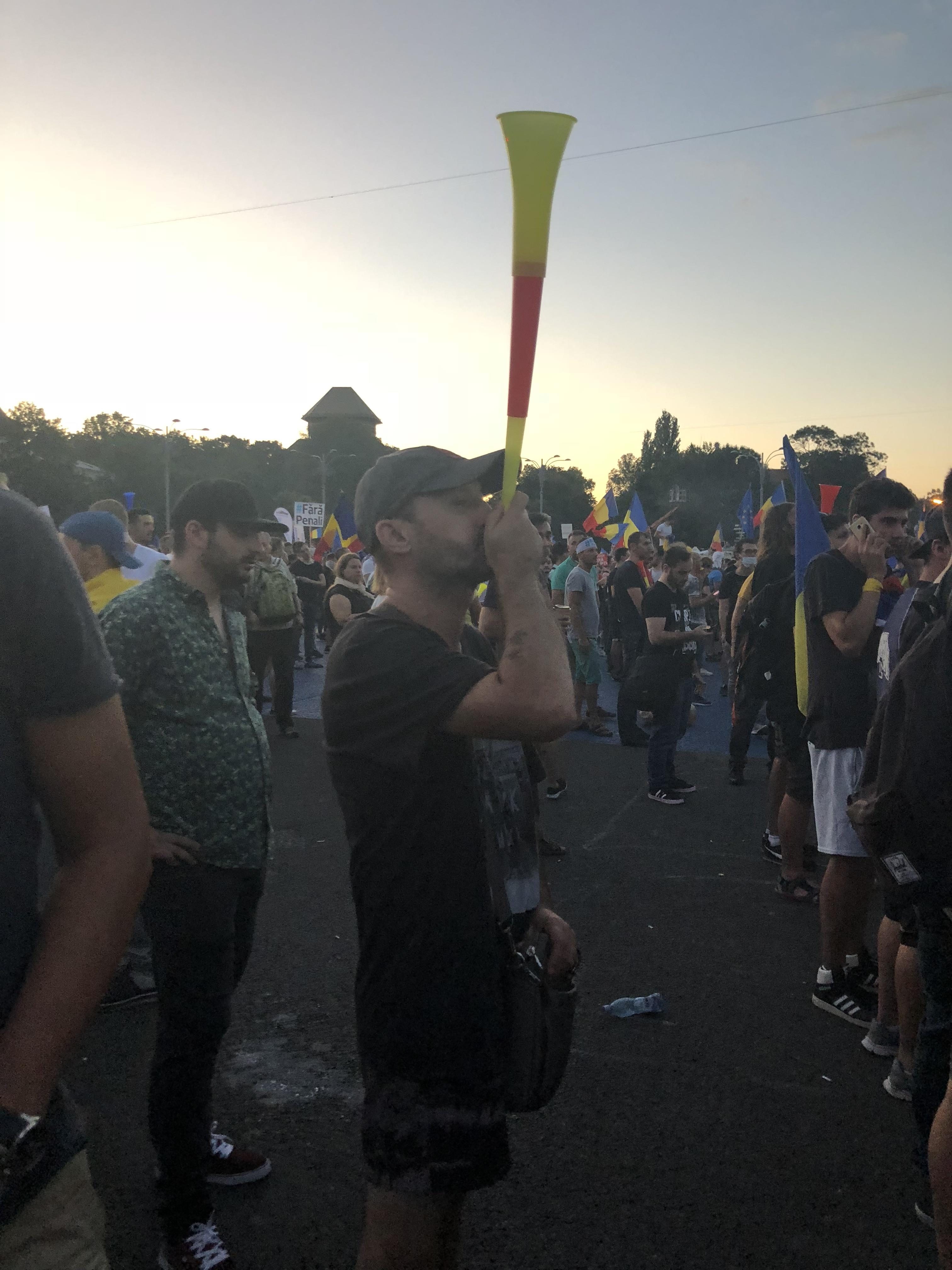 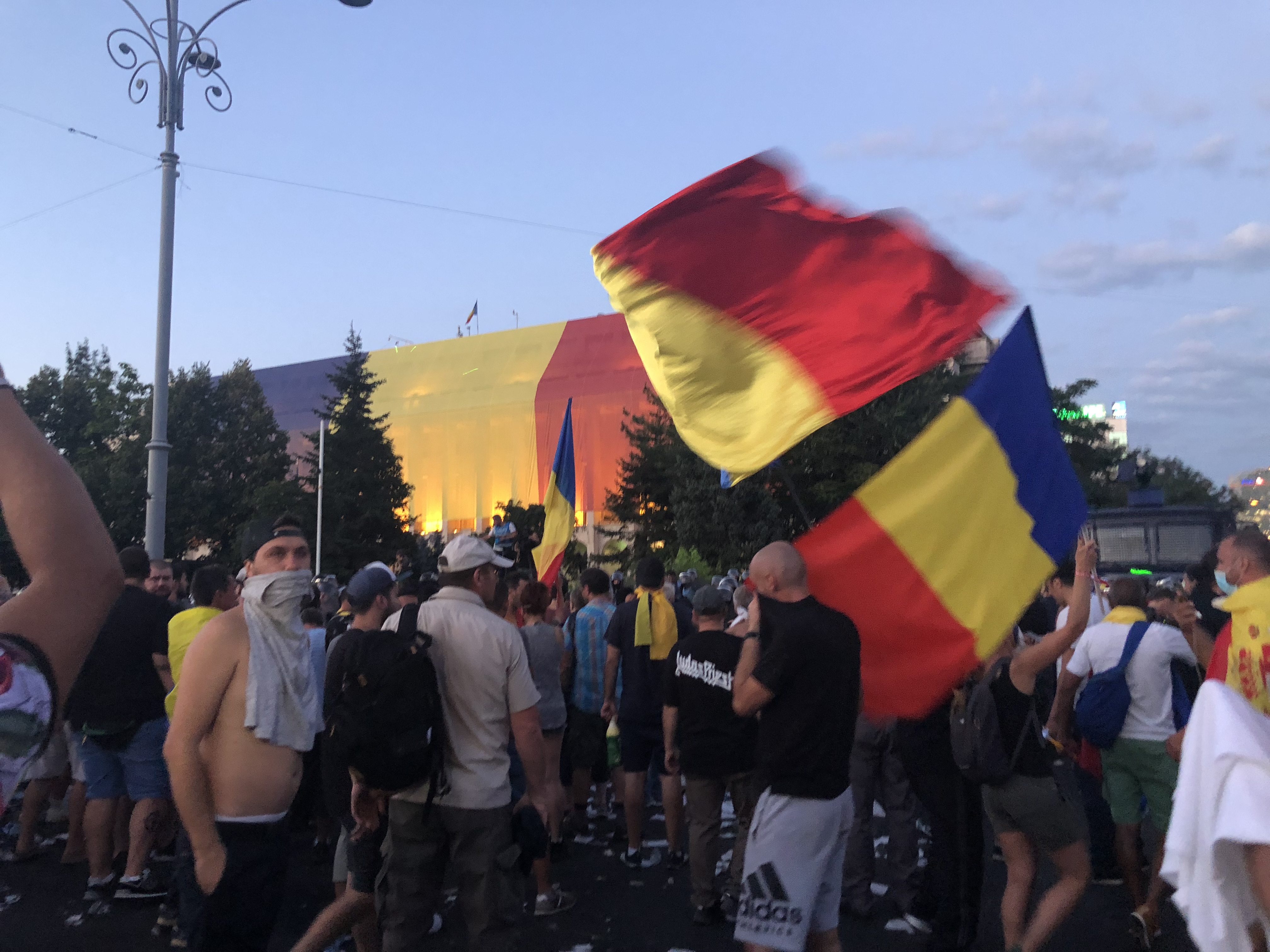 Even draping Victoria Palace, the main government building. As far as the guys covering the lower half of their faces goes, I did catch some whiffs of tear gas that had been sprayed out earlier

All kinds of flags. 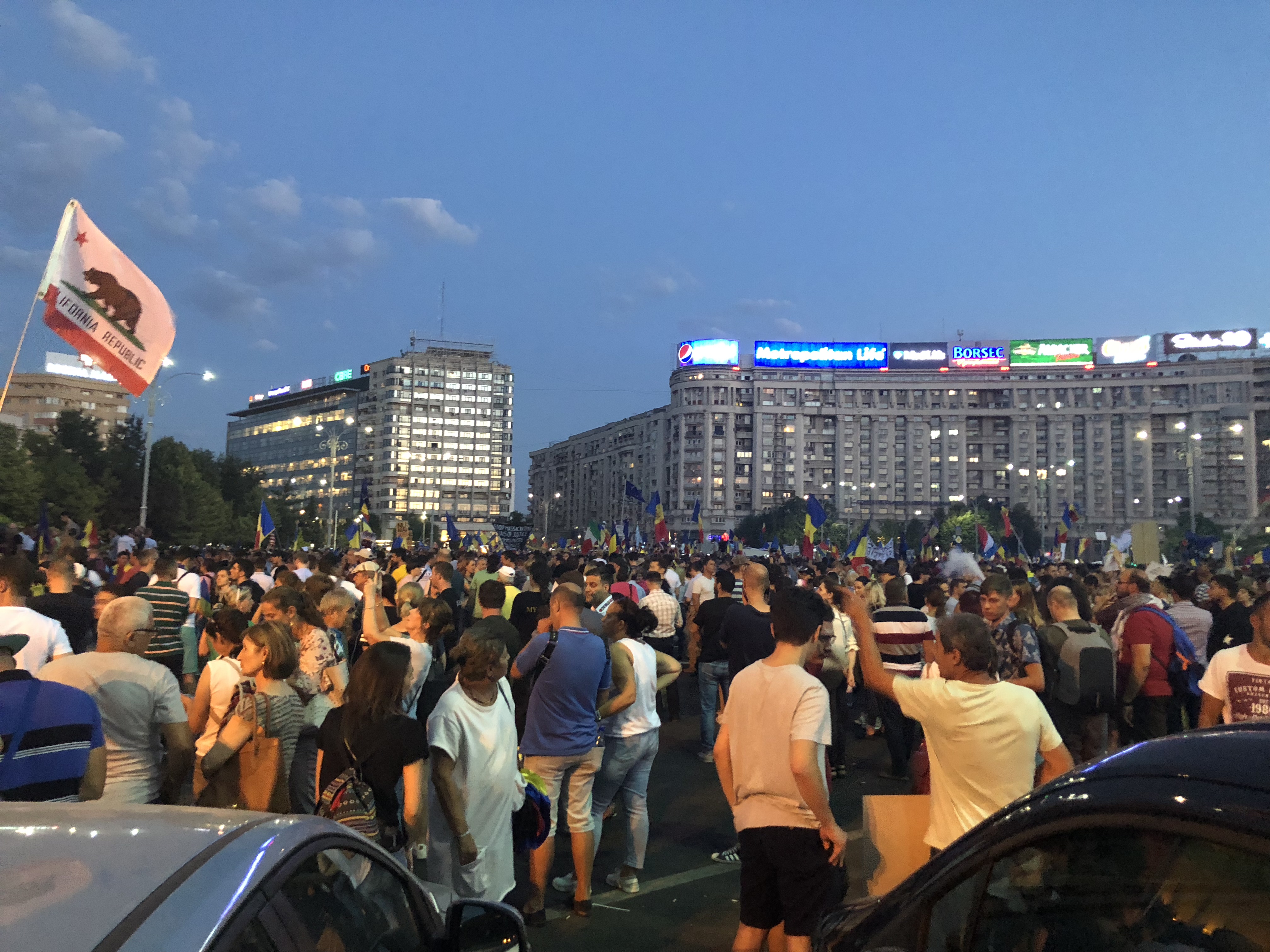 I’m not sure of the significance of the California Republic flag, but there it is on the left

The signs were mostly in Romanian (and one recurring sign was vulgar – I learned a new term). Here’s one in English, so non-Romanians can get the picture. 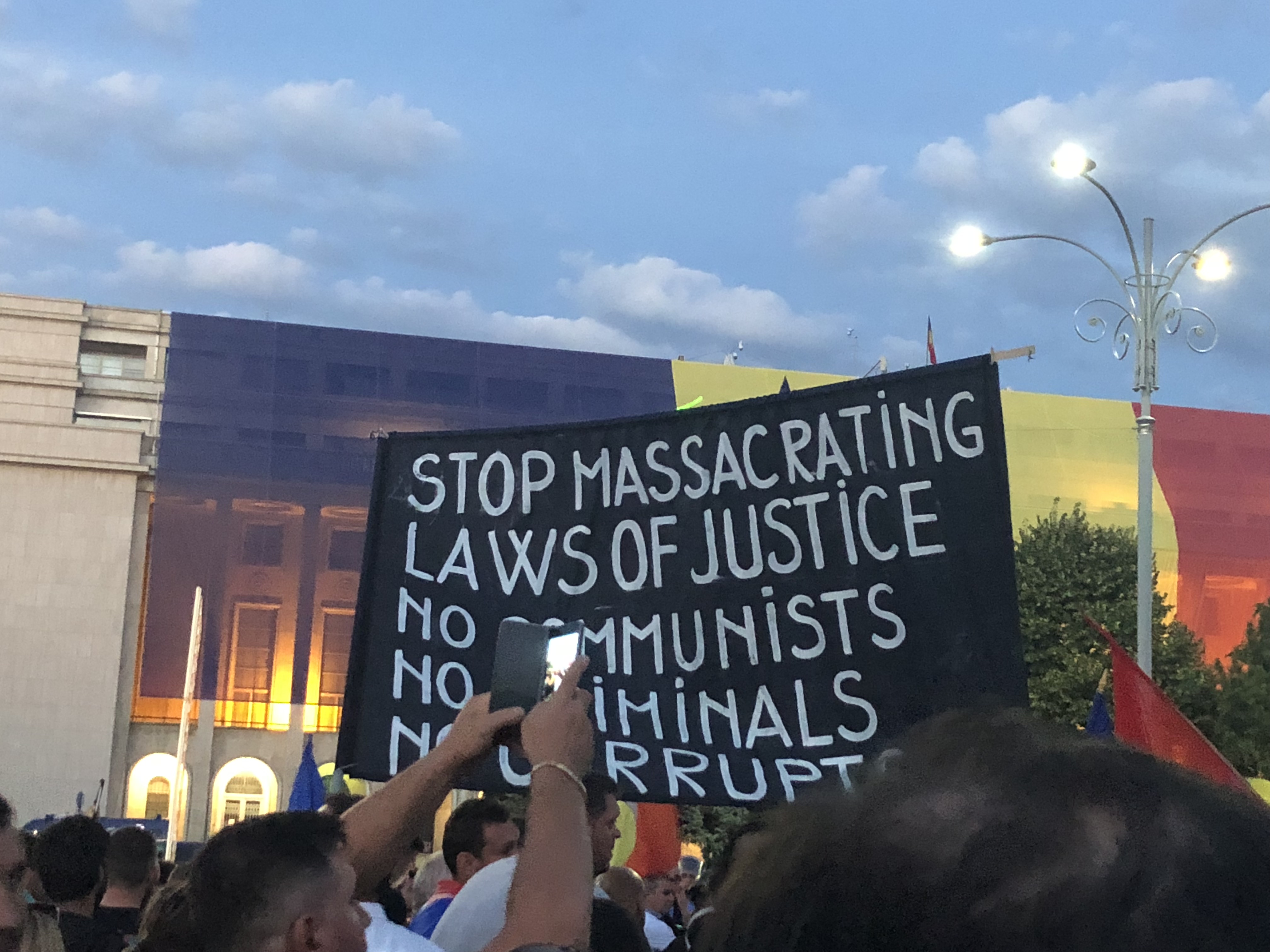 It was amazing to see all the main arteries to the piața blocked by protesters. Aviatorilor is a big one (see map). 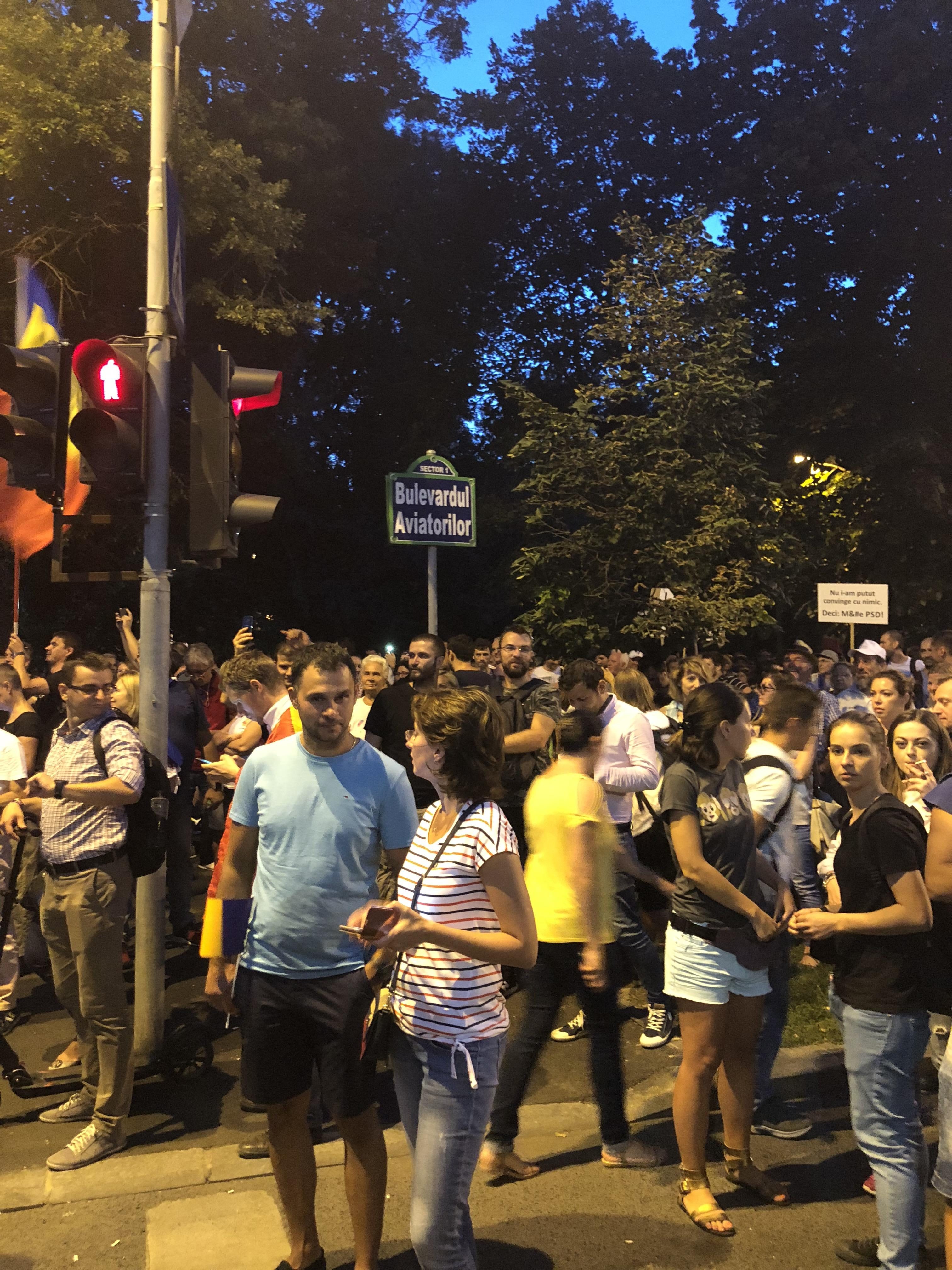 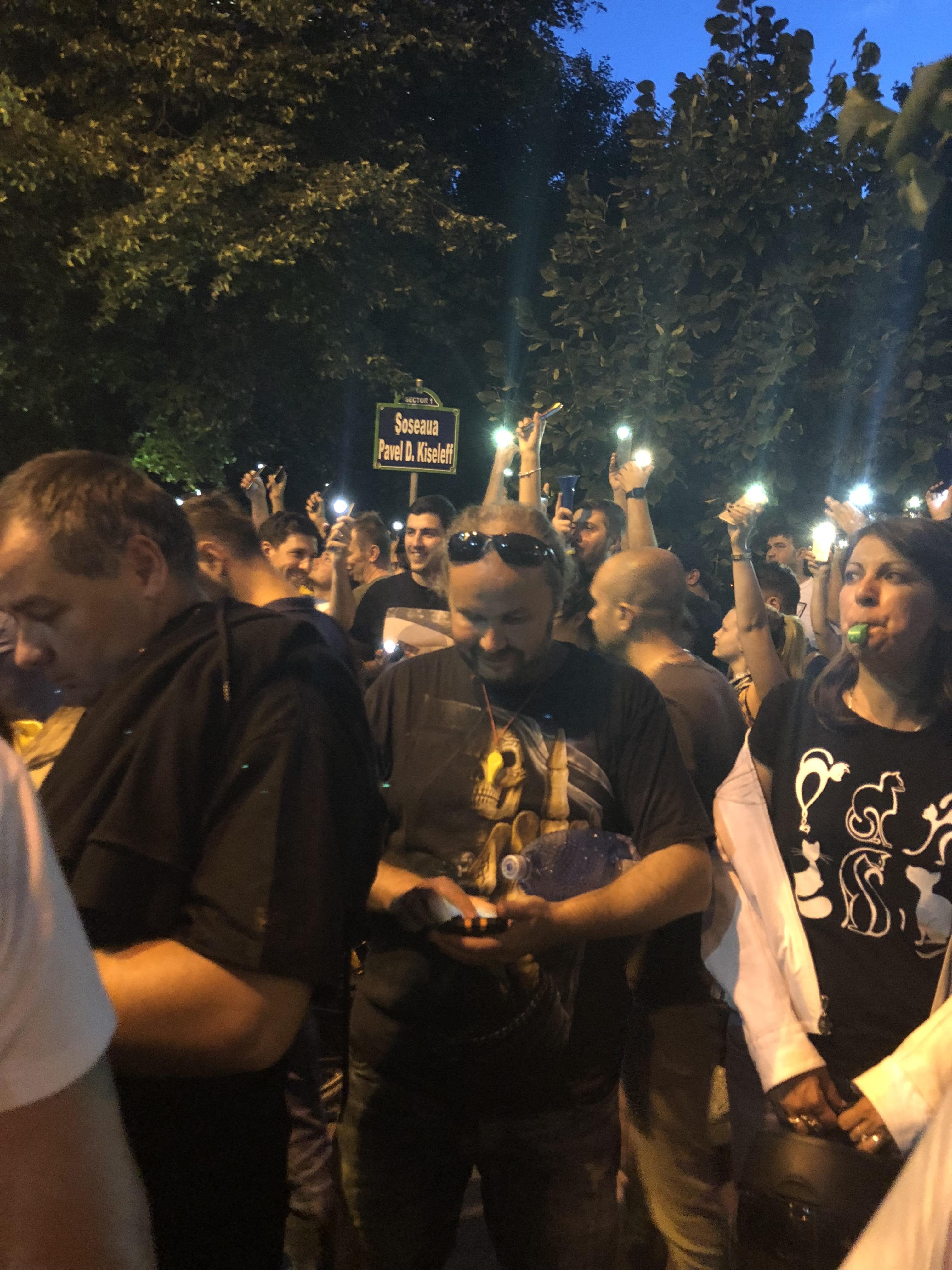 By now it was getting dark and people were turning on the flashlight function on their iPhones and holding them up. 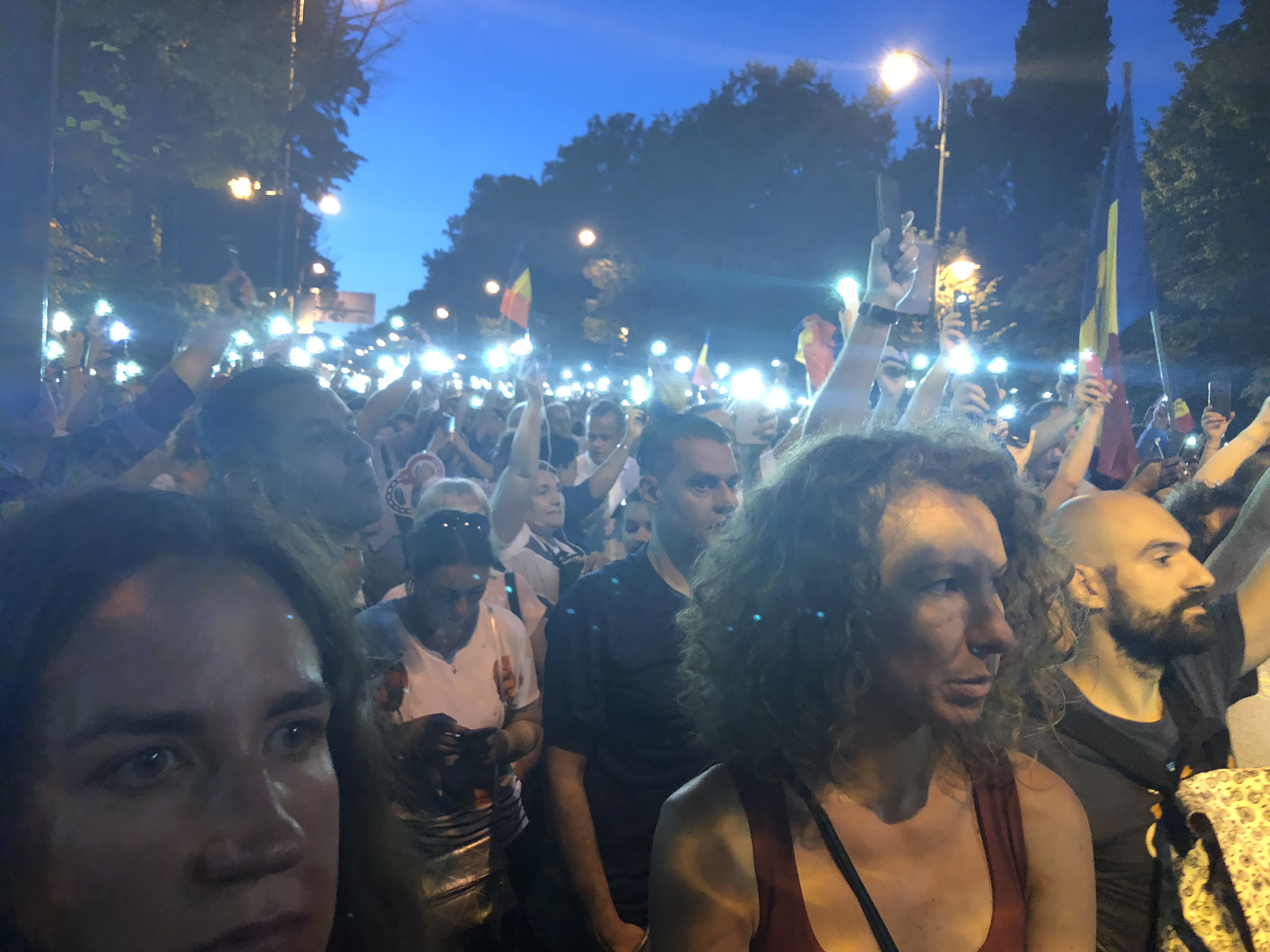 Americans can’t do this, because we protest by day

The crowd had every age group but trended young. Everyone was perfectly ordinary and orderly – as all my pictures show. By all estimates well more than 110,000 people turned up.

By 9:30 I decided it was time to go. I headed down Strada Paris, and was instantly dismayed. Sure, there had been regular police lined up outside Victoria Palace (just in case any protestors decided to storm it at night when no politicians were there?) But lined up for a good quarter of the way down Strada Paris was the jandarmeria in riot gear. 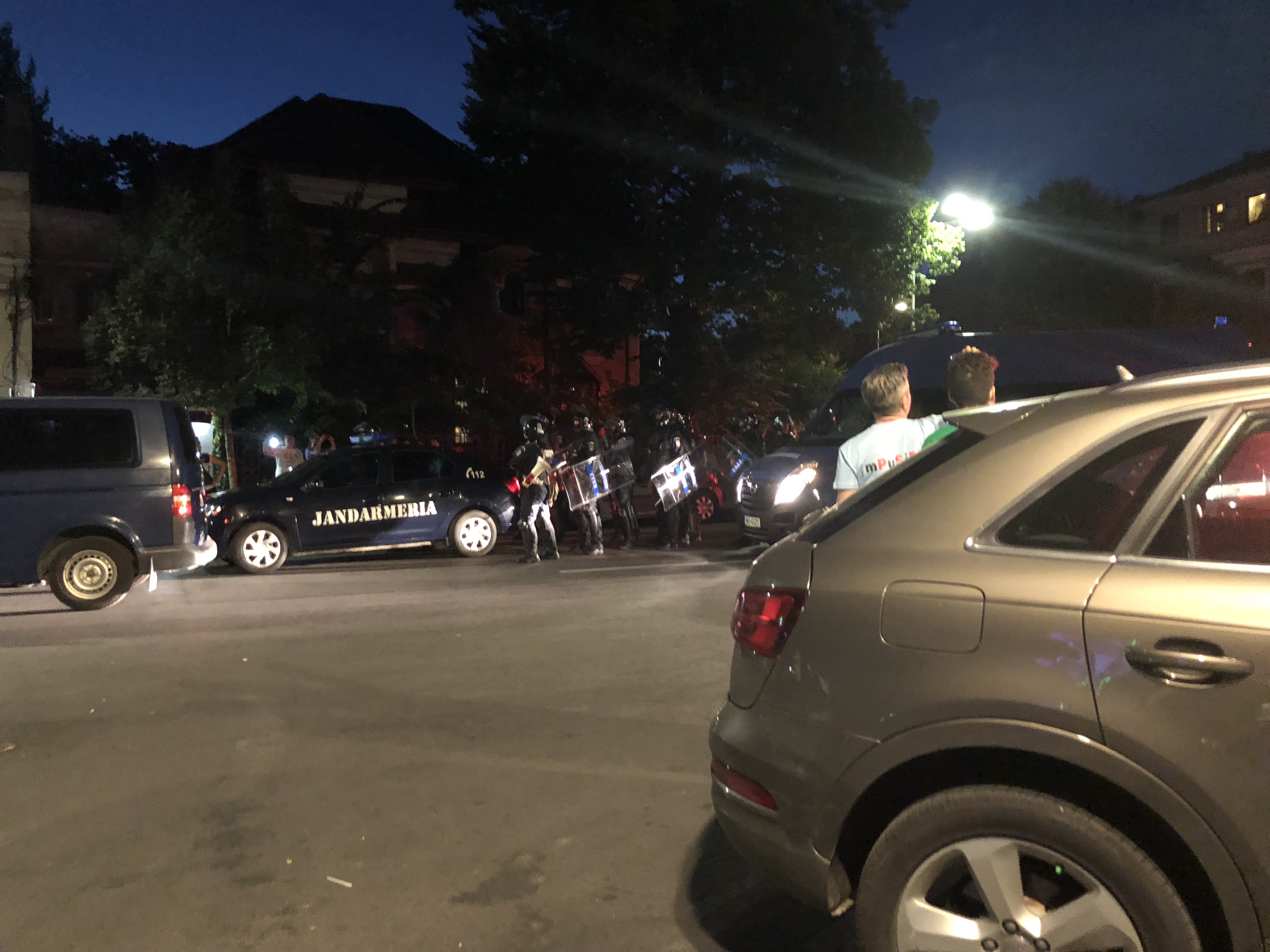 I didn’t get good pictures and was furthermore told not to take them, but here they are on the move: 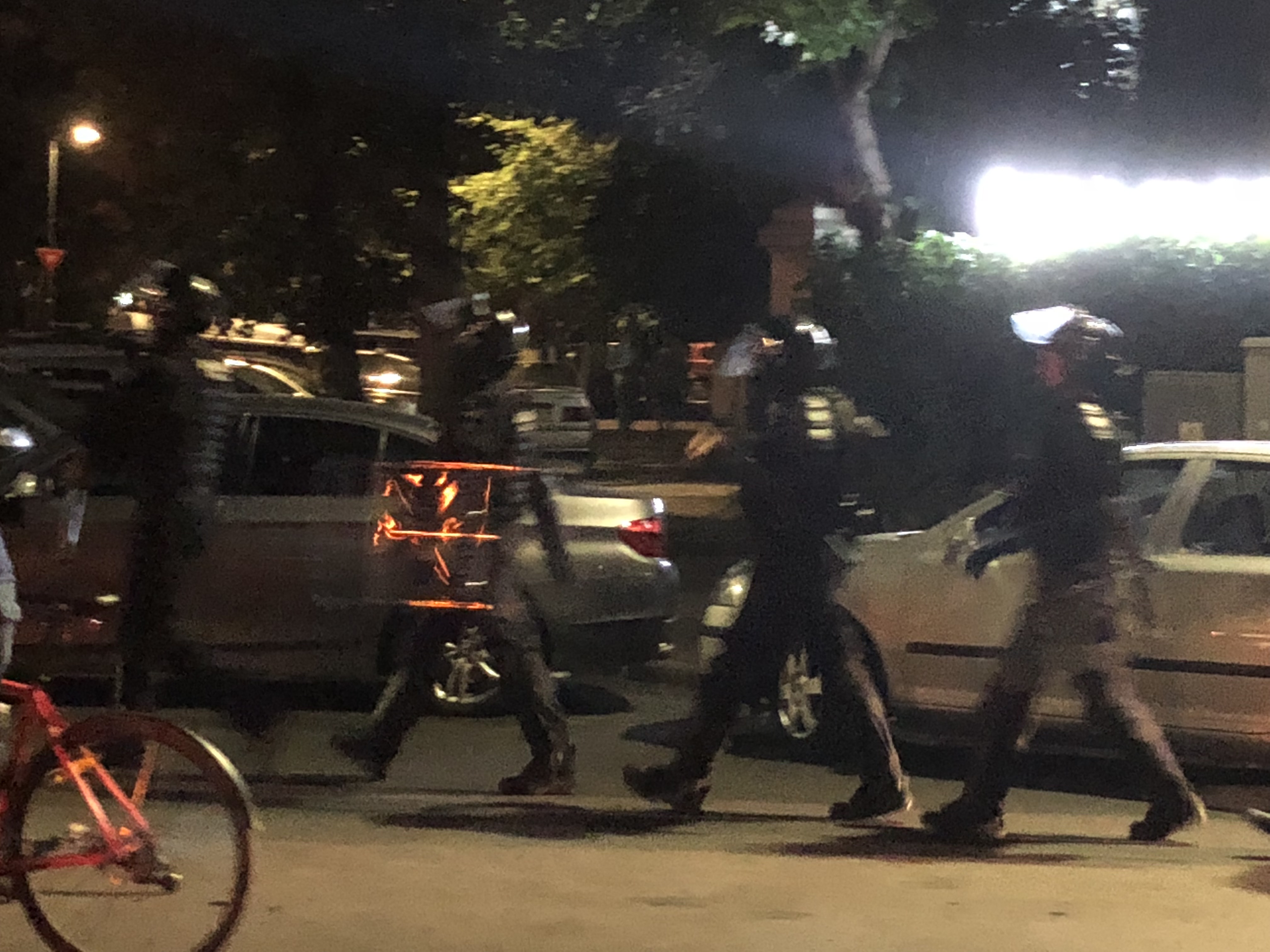 I went home and switched on TV. This is from Realitatea: 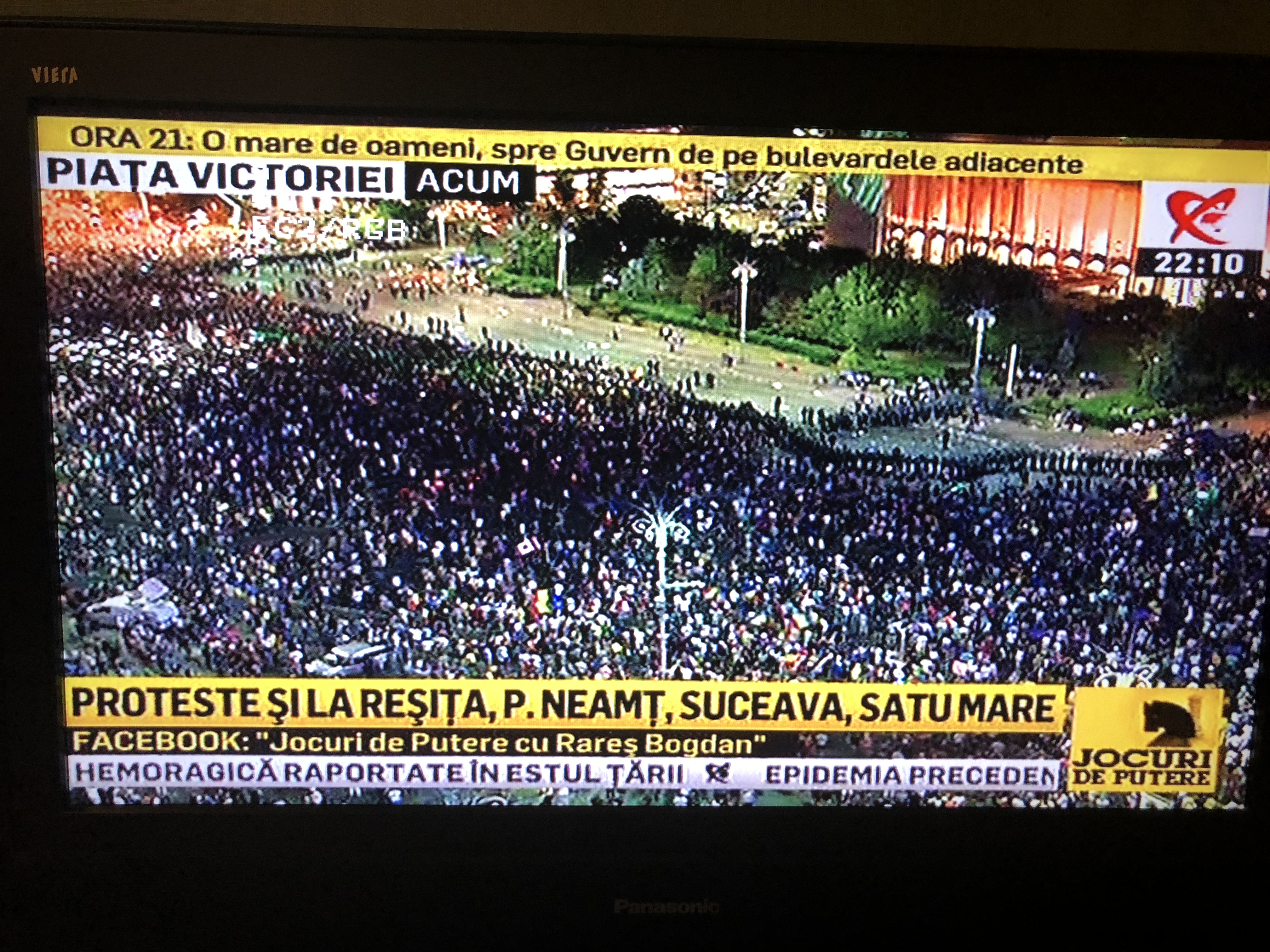 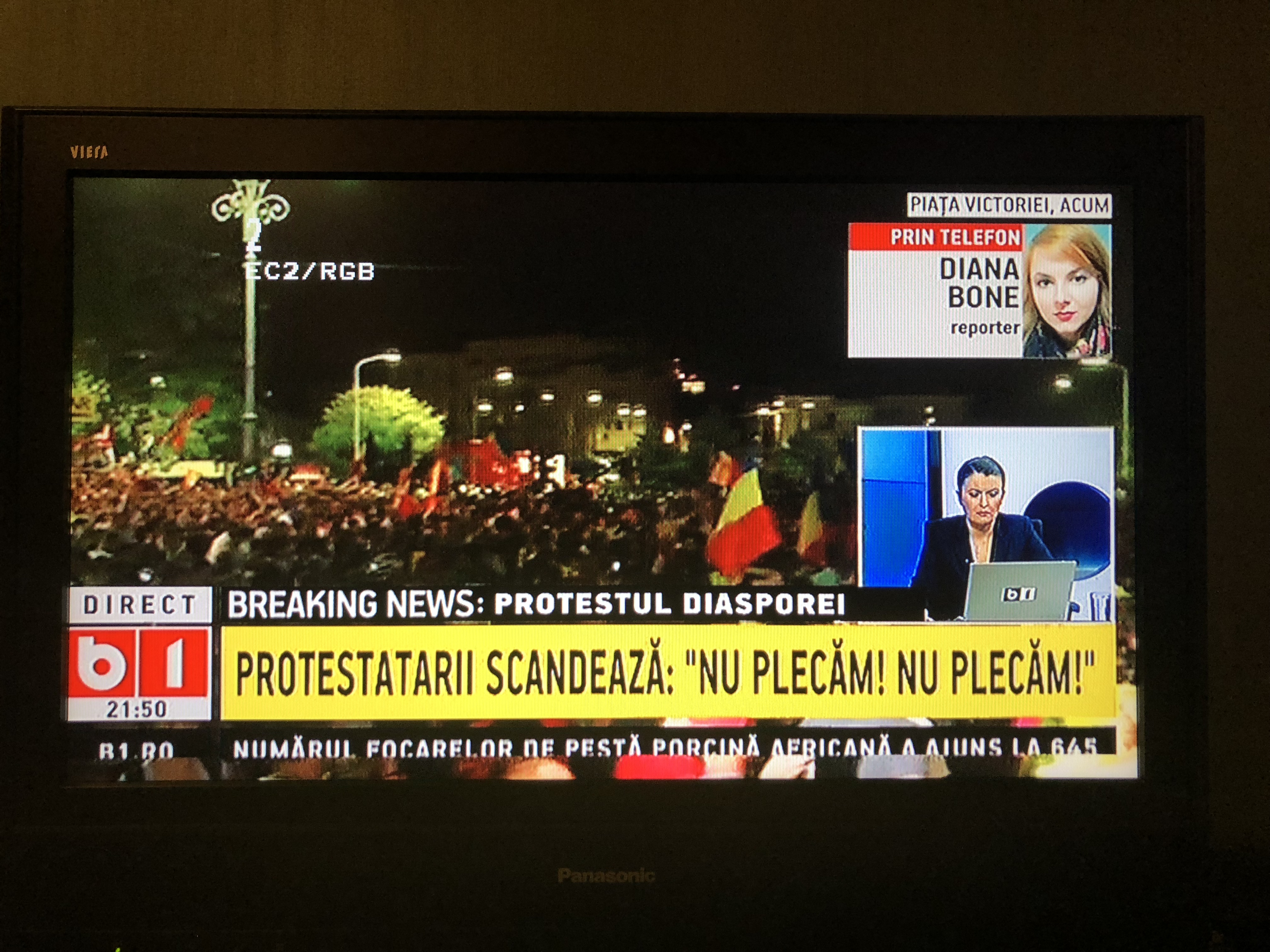 Sure enough, shortly after I started watching on TV, violence broke out. And this, after I had left a very calm event that included repeated chants of Fără Violență (without violence). I can’t stay that the riot police going down Strada Paris into the piața incited the violence, but I can say no violence was there before I left.

In my next blog I’ll try to give a sense of what the Romanian diaspora is all about.