The weather in Paris in May is wonderful – except when it isn’t. So what to do on a blustery rainy afternoon? Go to a movie, of course. We went to Les Halles, a shopping/entertainment complex in the center of Paris, where we knew there would be 30+ movies to choose from. There we found the latest French romantic comedy Un peu, beaucoup, aveuglément, which translates to A little, a lot, blindly. 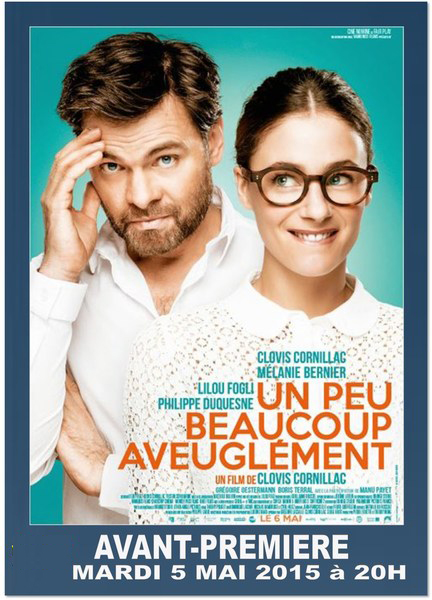 The ‘blindly’ part refers to the premise of the movie, where a man, known as Machin (‘thing’ masculine), and woman, known as Machine (‘thing’ feminine), fall in love without ever having seen one another. Although the set-up sounds like the usual internet thing, Un peu, beaucoup offers a twist: the couple shares an apartment wall, and this wall happens to be thin enough that each can hear everything that goes on in the adjoining apartment.

Indeed, the wall is so thin they can carry on a conversation with one another without raising their voices. However, they don’t begin by talking, they begin by waging a battle of escalating noise to drive the other away. When neither can stand any more of the hostilities, they declare a truce. After the truce comes friendship. Friendship blossoms to love. A romantic comedy staple.

All without having seen one another.

This romantic comedy toys with the idea that a couple can develop a more honest and intimate relationship when it is aveugle, blind. The title refers to the flower game ‘s/he loves me, s/he loves me not.’ In French there are five possibilities: un peu, beaucoup, passionnément, à la folie, and pas du tout: ‘a little’, ‘a lot’, ‘passionately’, ‘to madness’, and ‘not at all’. The movie title replaces ‘passionately’ with ‘blindly.’

At one point Machin and Machine get close enough to one another to move their beds together at the wall, with resulting visuals shades of Doris Day and Rock Hudson in Pillow Talk. Machin and Machine also decide to have a dinner party and prepare the same food on either side of the wall. Machin invites his friend, Artus, and Machine invites her sister, Charlotte, to a dinner for four – with the two men and the two women separated by the wall.

Needless to say, Artus and Charlotte are a bit surprised and rather skeptical of Machin and Machine’s declarations of the reality and meaningfulness of their relationship. A brief scene suggests the way Machine’s sister buys into the premise. Charlotte, unhappily married, is in bed with her husband. He’s doing a crossword puzzle. He asks, “What’s a seven-letter word for happiness?” She answers, “C-L-O-I-S-O-N,” i.e. wall/partition. Okay, we get it.

Will this romantic comedy make it to the U.S.? Hard to say. It’s likely you’ll eventually be able to find it on Netflix. The plot is predictable, the dialogue marginally entertaining, and the main idea weakly developed. However, if you want to spend some not disagreeable time with two cinegenic main characters with the occasional equally appealing scene of Paris thrown in, then go for it.

Cosmetic note on hair: As an addendum to my blog last year entitled Getting My Hair Done Around the World, I need to add that a Shamp/Brush, i.e. 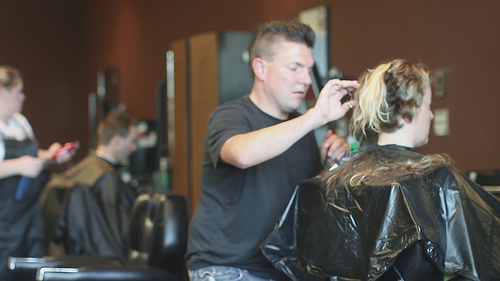 a shampoo and a blow dry, costs 20 euros. This price seems to be stable all over Paris. I was happy with my service, and I chose just any old place in the neighborhood of my hotel in the 9th. So French hairdressers continue to be reliable.

Linguistic note on French: I bring up the Shamp/Brush thing because I haven’t been in France for a while, and I am much struck this time around by how widespread is the linguistic word formation process known as clipping. Older examples of clipping in English include lab < laboratory and gym < gymnasium. More recently we have nav < navigation system.

In French the clipped form of frigidaire, namely frigo ‘fridge’, has been around for decades. So has pub < publicité (‘ad’ from ‘advertisement’) and clime < climatisation (‘air con’ from ‘air conditioning’). My recent forays into hair care gave me of shamp < shampoing ‘shampoo’ and brush < brushing ‘blow dry’.

In the movie I noticed the word appart < appartement is now a norm, as in quel bel appart ‘what a nice apartment’. Also, one of Charlotte’s teen-aged daughters said something like, “À tout,” evidently now the current clipped form for à tout à l’heure ‘see you later.’

On the radio today I heard entre guims apparently from entre guillemets ‘in quotes.’ What’s interesting about this form is the clipped form pronounces the final -s, while the spoken form of the full written form does not. So there are phonetic rules for clipping. One widely used one is a final -o, as in frigo. Other examples include resto < restaurant and apéro < apéritif.

It’s always nice to catch up.

Compelling Openings: A How To