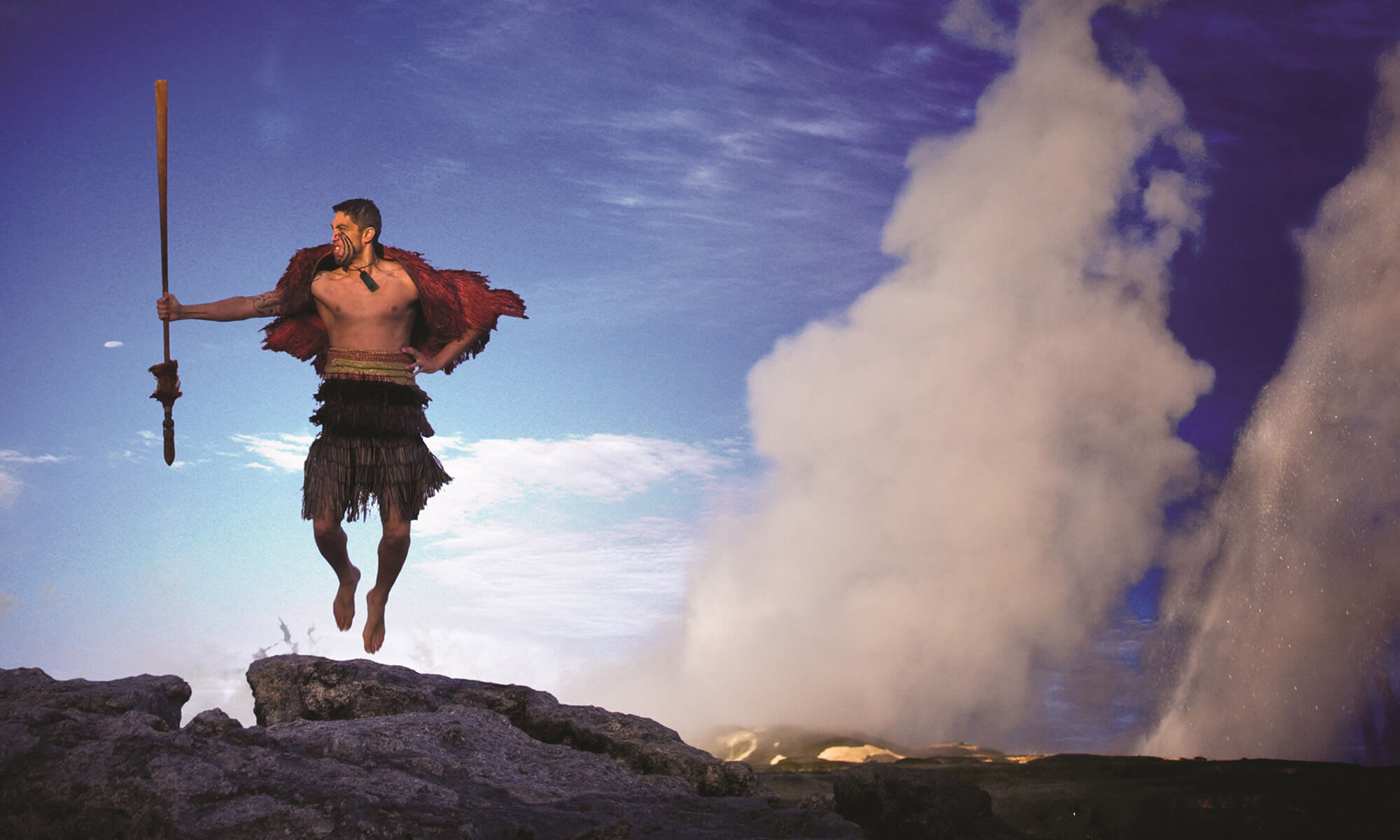 Title Image: Te Puia, a geothermal center in Rotorua owned by the Māori. The geyser viewing comes at the end of the evening’s entertainment.

My trip to New Zealand was inspired mostly by wanting to look into the Māori language situation. It is often talked about in linguistic circles as being an example of a (cautiously optimistic) successful language revival. However, you can only read so much about a place. At some point you have to go there.

The place to go in New Zealand for Māori is Rotorua, a three-hour drive south east of Aukland, and the thing to do in Rotorua is to attend a marae, a Māori welcoming ceremony, concert and feast. So we signed up for one at Te Puia, a five-minute drive from our hotel, The Regal Palms: 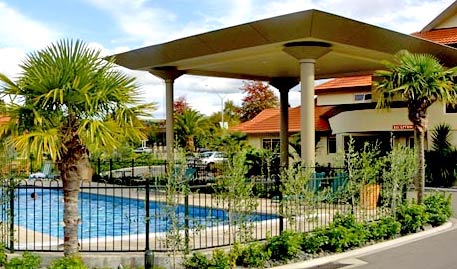 Side note: Upon arriving at the Regal Palms my jaw dropped. The reason? Let’s see … I had just left Florida a few days before to travel half-way around the world to arrive … in another version of Florida. I rarely do advance research on places I visit. I like to be surprised. The surprise here was of utter familiarity, not a palm tree or red-tiled roof out of place.

So, we went to the marae. Here’s our host giving his opening remarks. What was I fixated on? 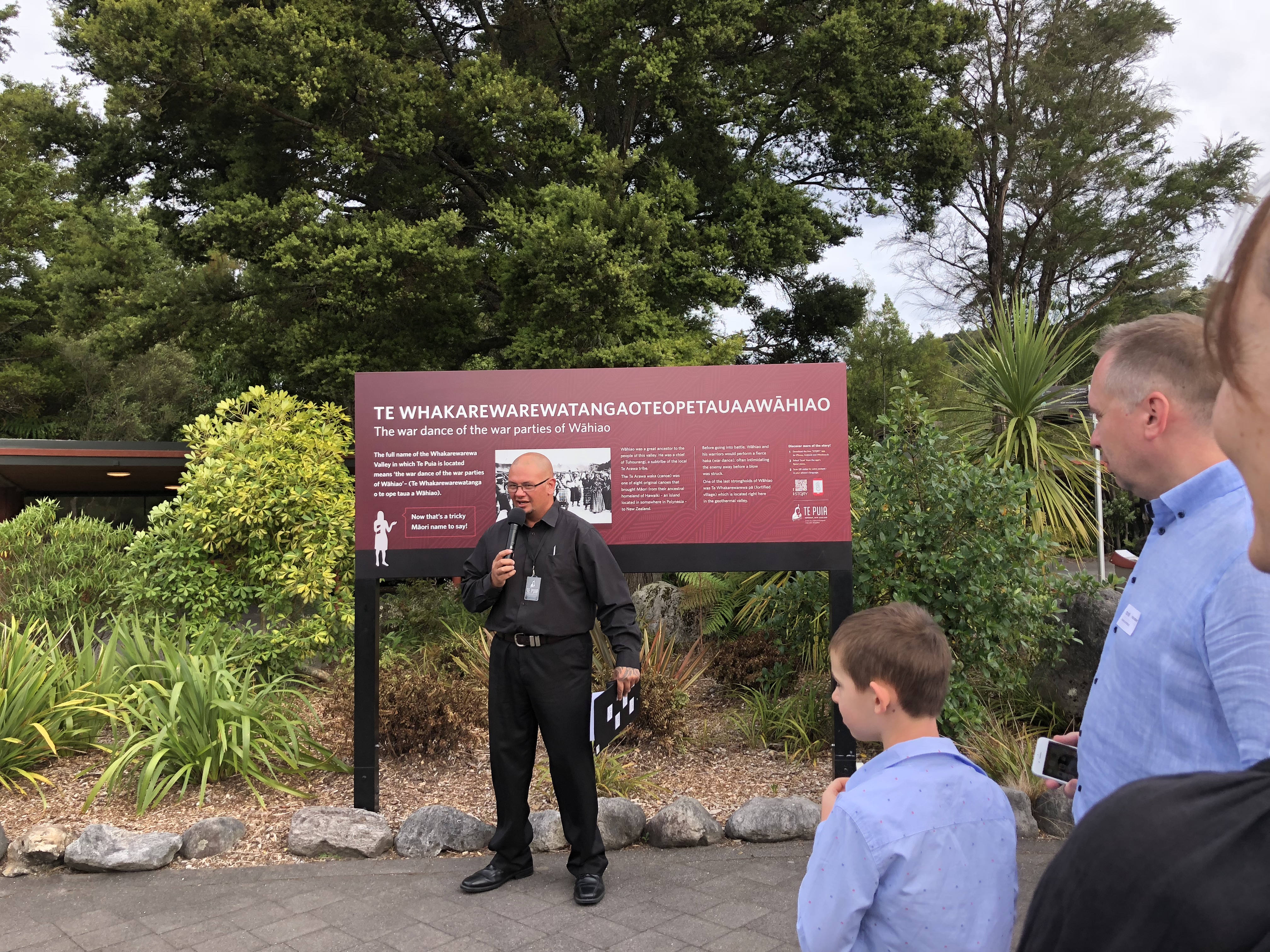 The sign behind the guy, of course. Love the long word. Am less thrilled about the translation below, which likely loses a lot, except for the last part Wāhiao, which is apparently the name of the people.

Moving on, I loved the long boat. 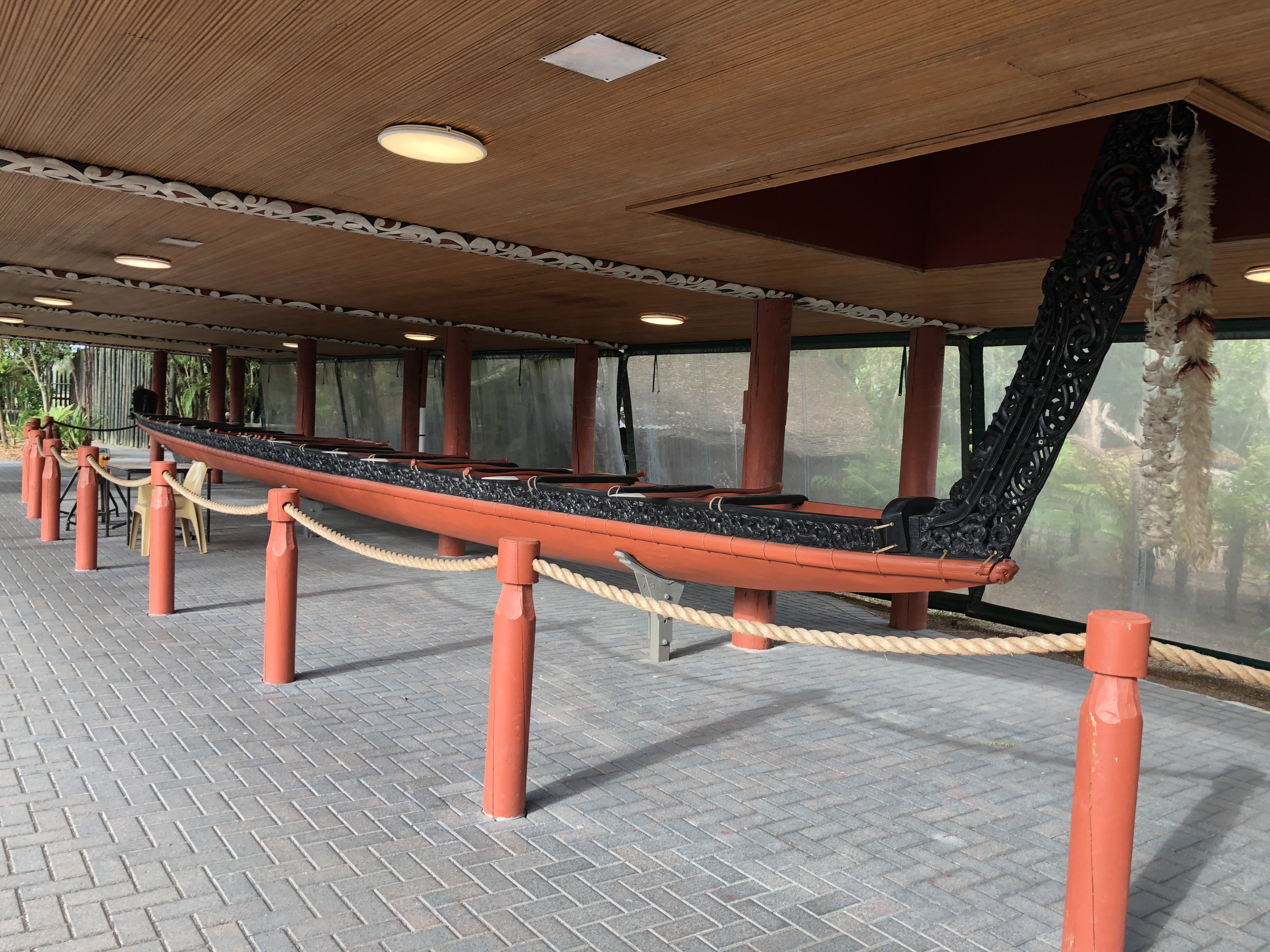 The Polynesians are among the world’s most daring seafarers, given that their homeland was Taiwan. 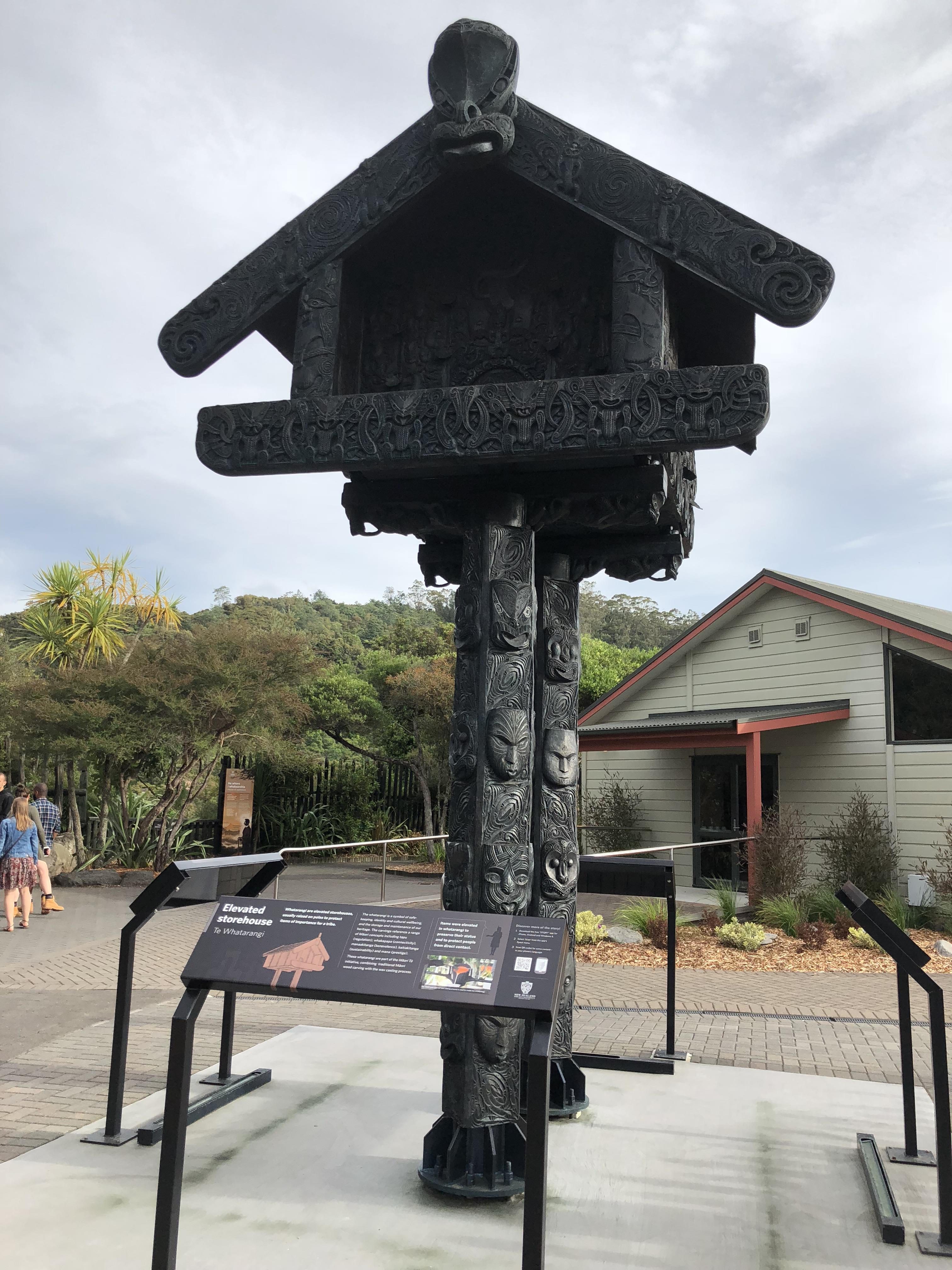 Then a peep at the hāngi, which I assume means ‘cook pit’ 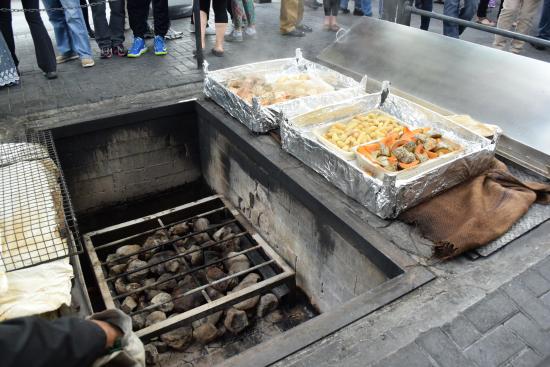 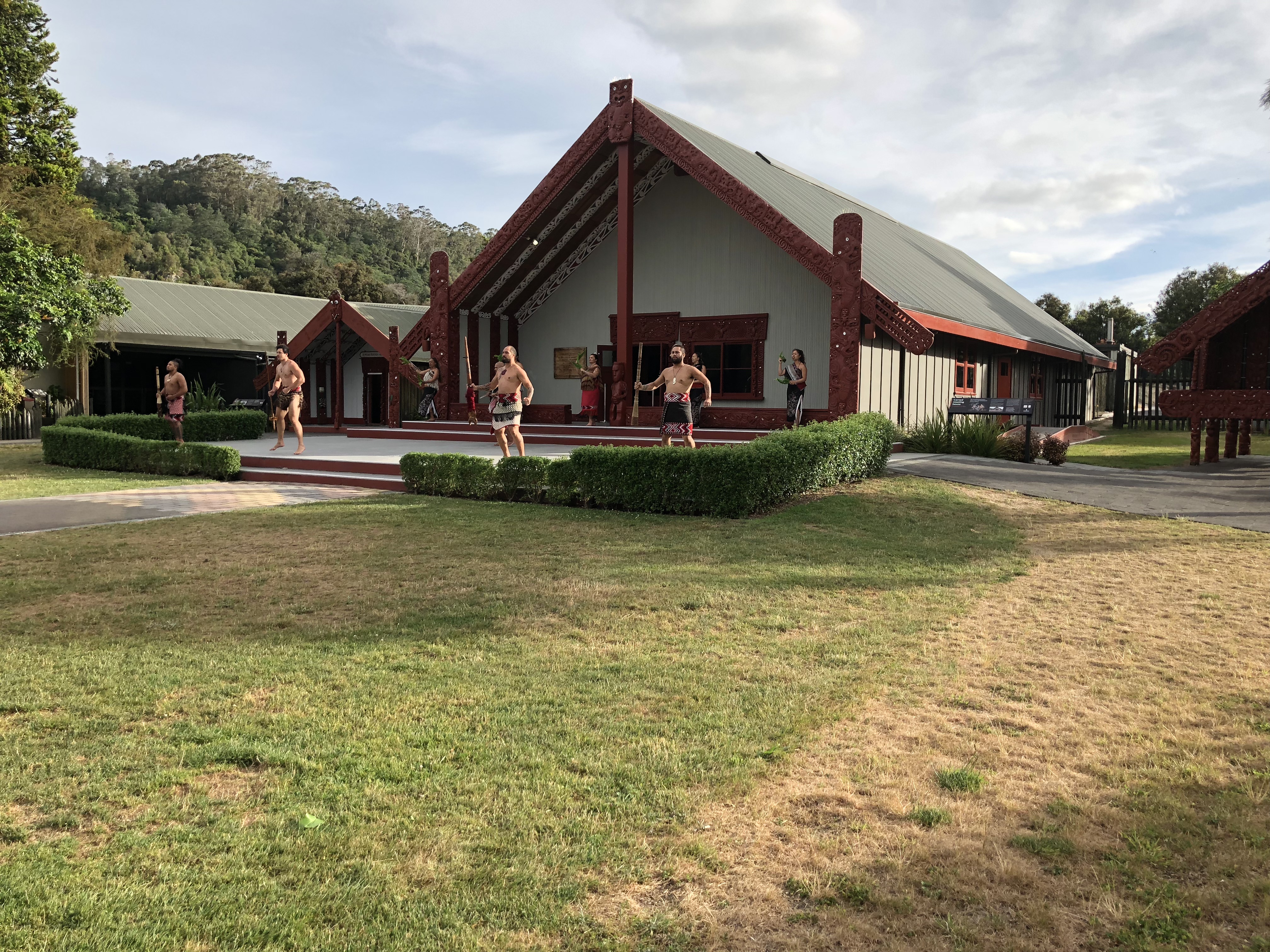 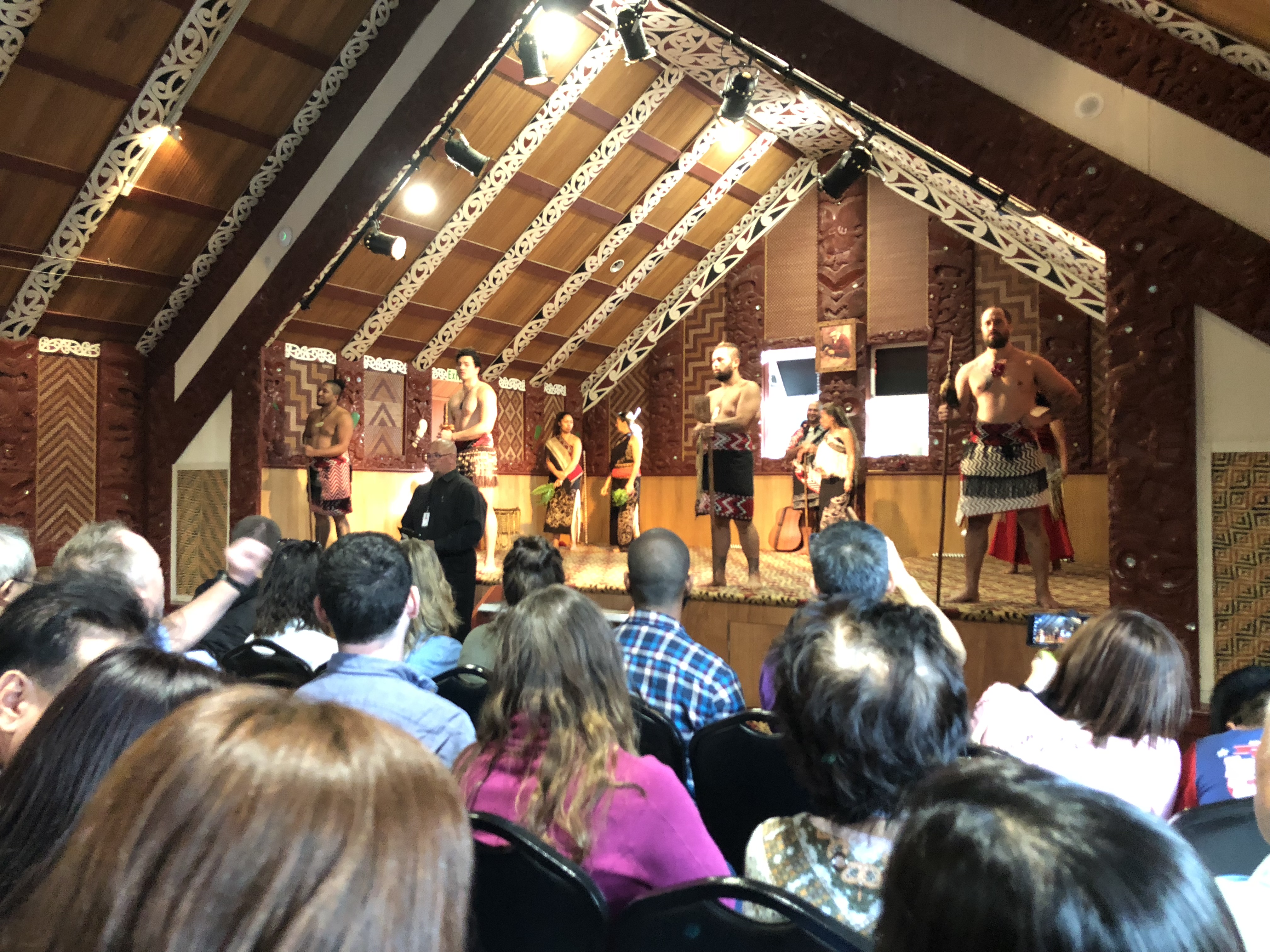 and rhythmic ball twirling by the women 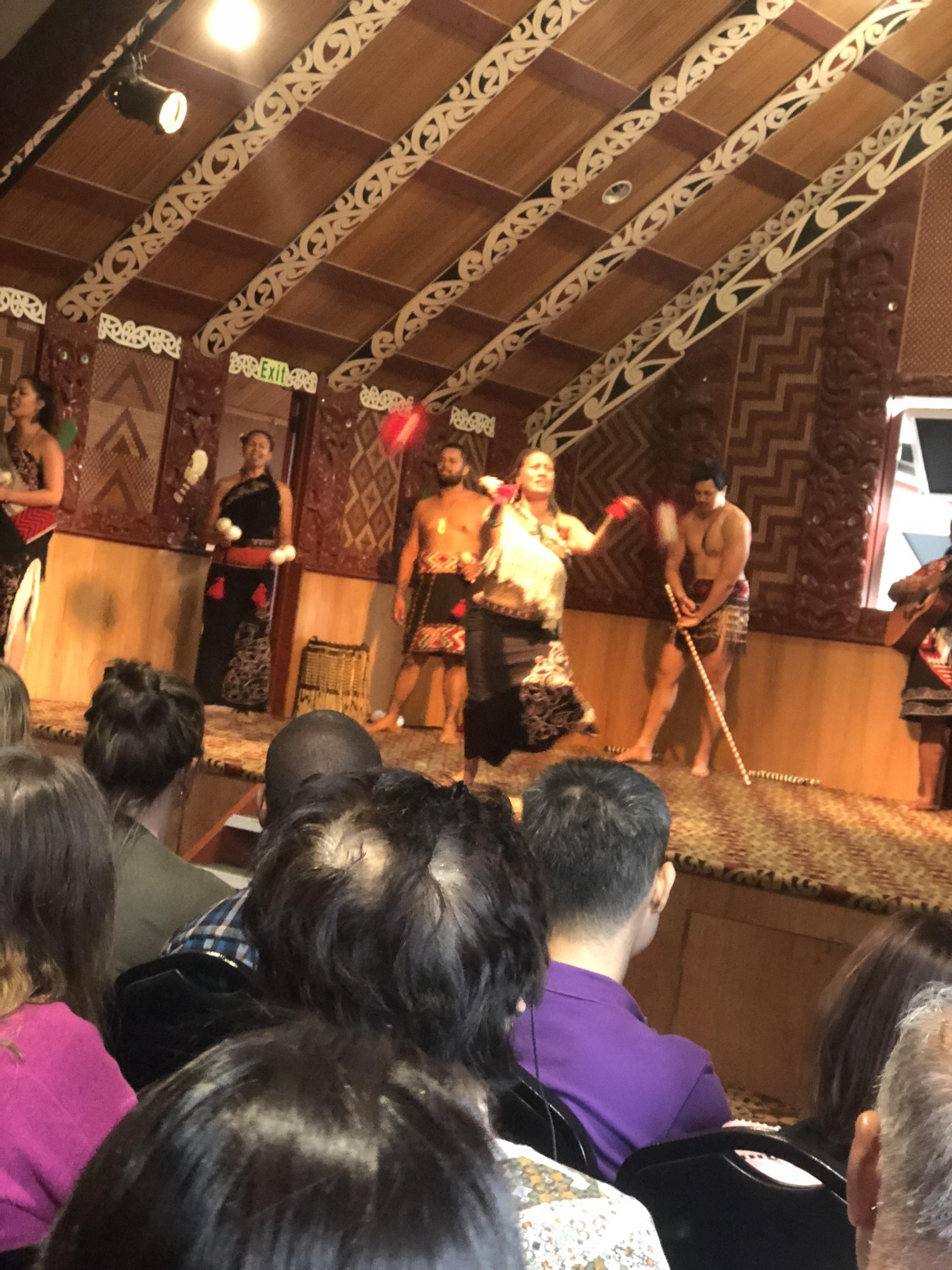 However, for us the highlight was the dinner, because we were lucky enough to be seated at a table with 3 young Māori. At first, we refrained ourselves from grilling them, but after we showed enough interest in them, one of them was moved to ask, “Do you have any other questions for us?” The answer: Yes, like a 100. 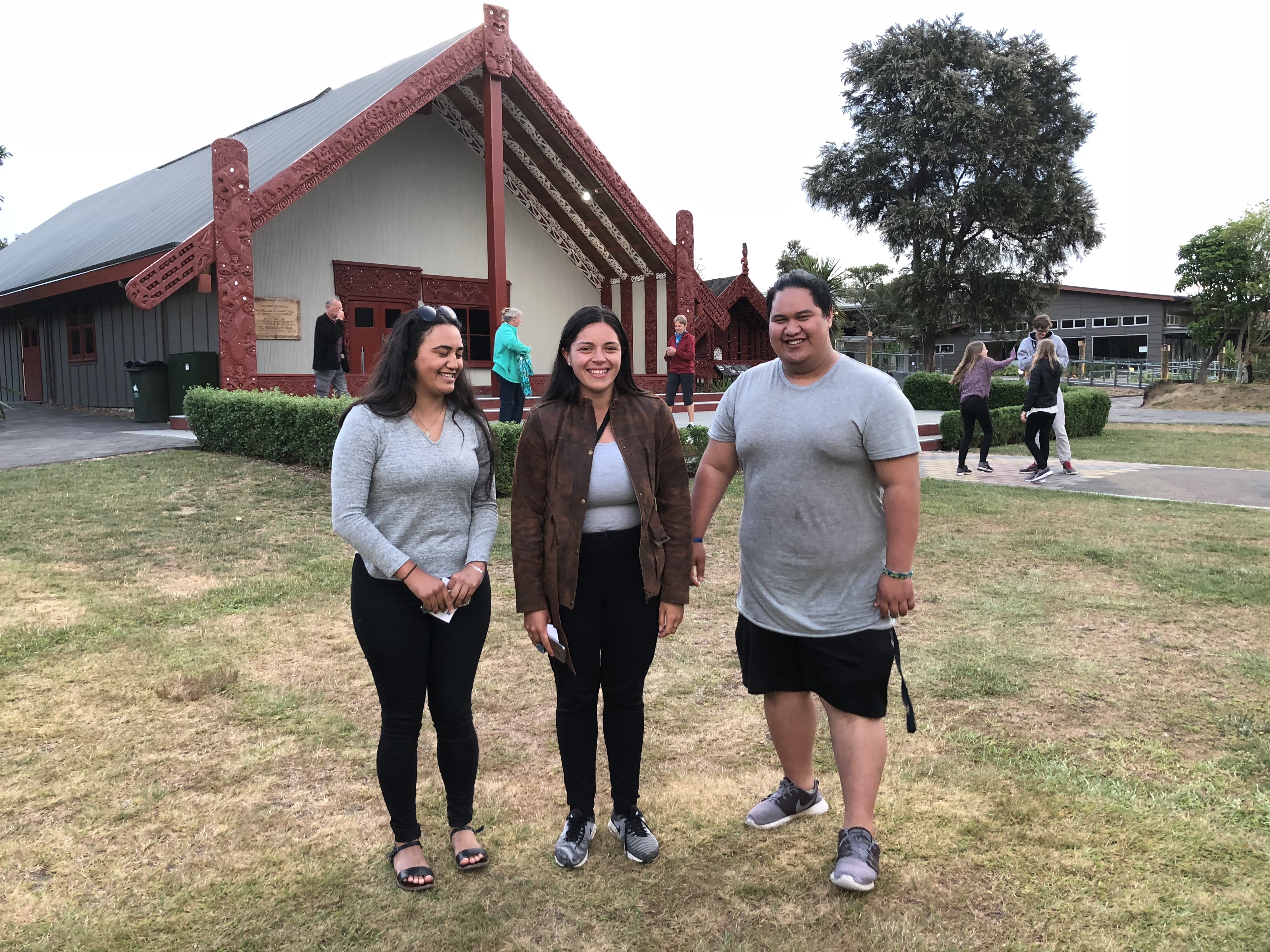 Stacee on the left, Tiana in the middle and Karangawai on the right. Linguistic note: Karangawai means ‘calling of the waters,’ with wai meaning ‘water.’ Think of Waikiki, with kiki meaning something like ‘spouting.’

Tiana went to a Māori immersion school up until high school, and she is the only one of the three who is a fluent Māori speaker and uses it at home. When I asked them if they would teach Māori to their children, all three answered with an emphatic Yes. However, after a thoughtful moment, Stacee added, “But first I’ll have to learn it.”

Stacee furthermore thought our interest in them and their language was, in her word, “Cool.” Apparently no visitors really ever ask them about it, which is hard for me to believe. However, I should have learned by now that people are about as interested in saving endangered languages as they are in saving the whales or the world’s poor. It’s not a topic that resonates.

As I said in Ten Things to Know About New Zealand, the Māori language has great symbolic value in New Zealand, and pride is taken in making it visible on the money, street signage and other public venues. For instance, kia ora ‘hello’ or ‘welcome’ is said and written probably as much as aloha is in Hawaii.

So the public will to feature the language exists and has the backing of the government. And, like in Hawaii, Māori culture is respected and incorporated into public life where possible.

The fact is, however, the main Māori area in New Zealand is the town of Rotorua. Nowhere else  – as far as I can tell – is the language vibrant and fully functioning. And in Rotorua itself, my sample size of 3 Māori under the age of 25 is admittedly small, but I would have felt better if more than just 1 in 3 spoke the language.

After a week now in New Zealand I have mixed feelings about the success of the revival.

Note: I am not an expert. Since I am now getting in contact with experts, my feelings may get unmixed, one way or another.

Crossword Clue Envy – I Suffer From It!