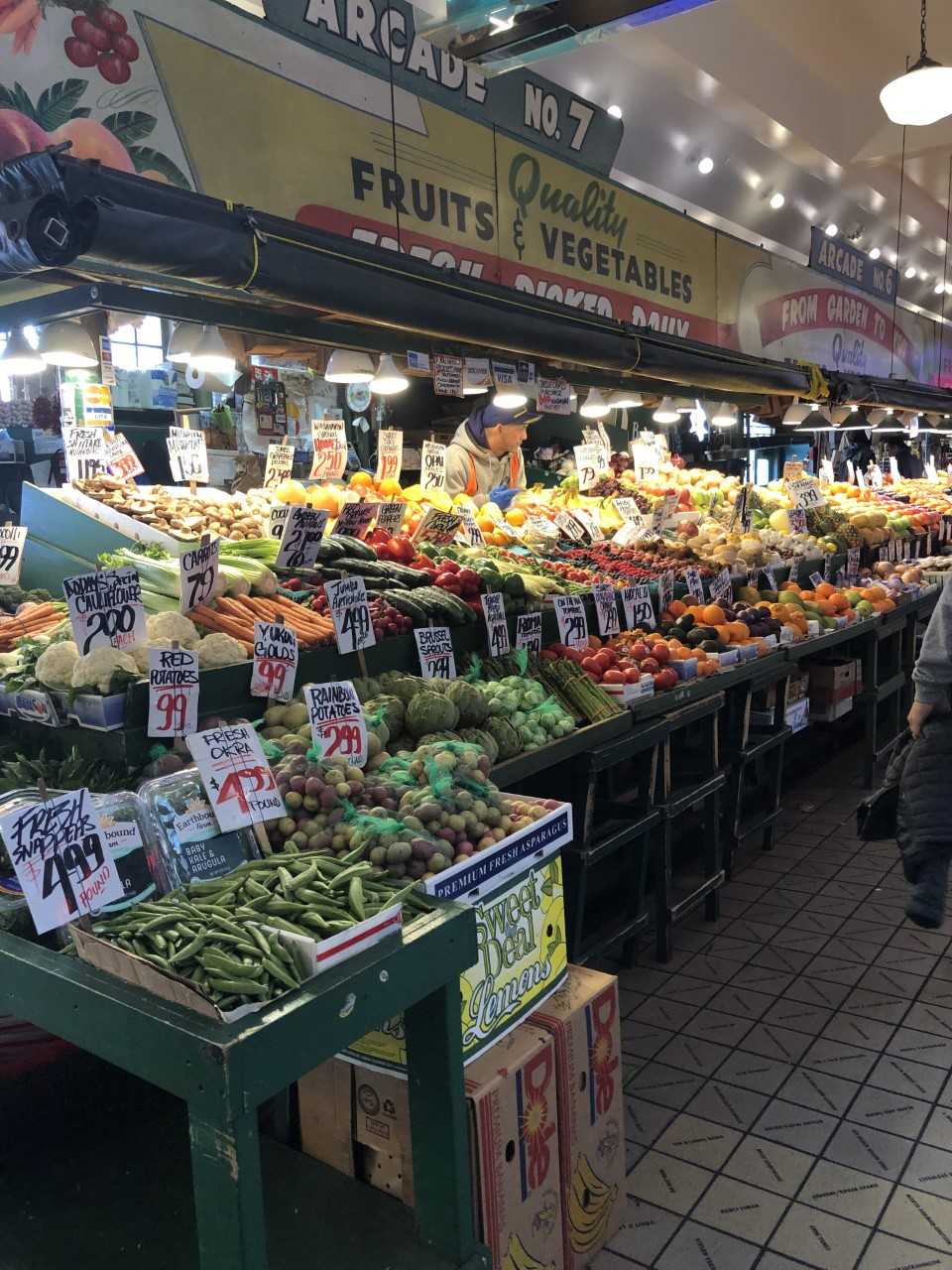 The title could have been: Seattle WA?

The first day of my 5-month trip around the world began with a resounding THUD!  I never made it out of Durham, NC because of storms. However, my luggage did. My luggage and I finally met up in Seattle on Tuesday. On Monday my prospects for getting off the ground were dim, and I was wondering if Seattle was out of reach.

So what to put as the title image for a blog on Seattle?

There is always this: 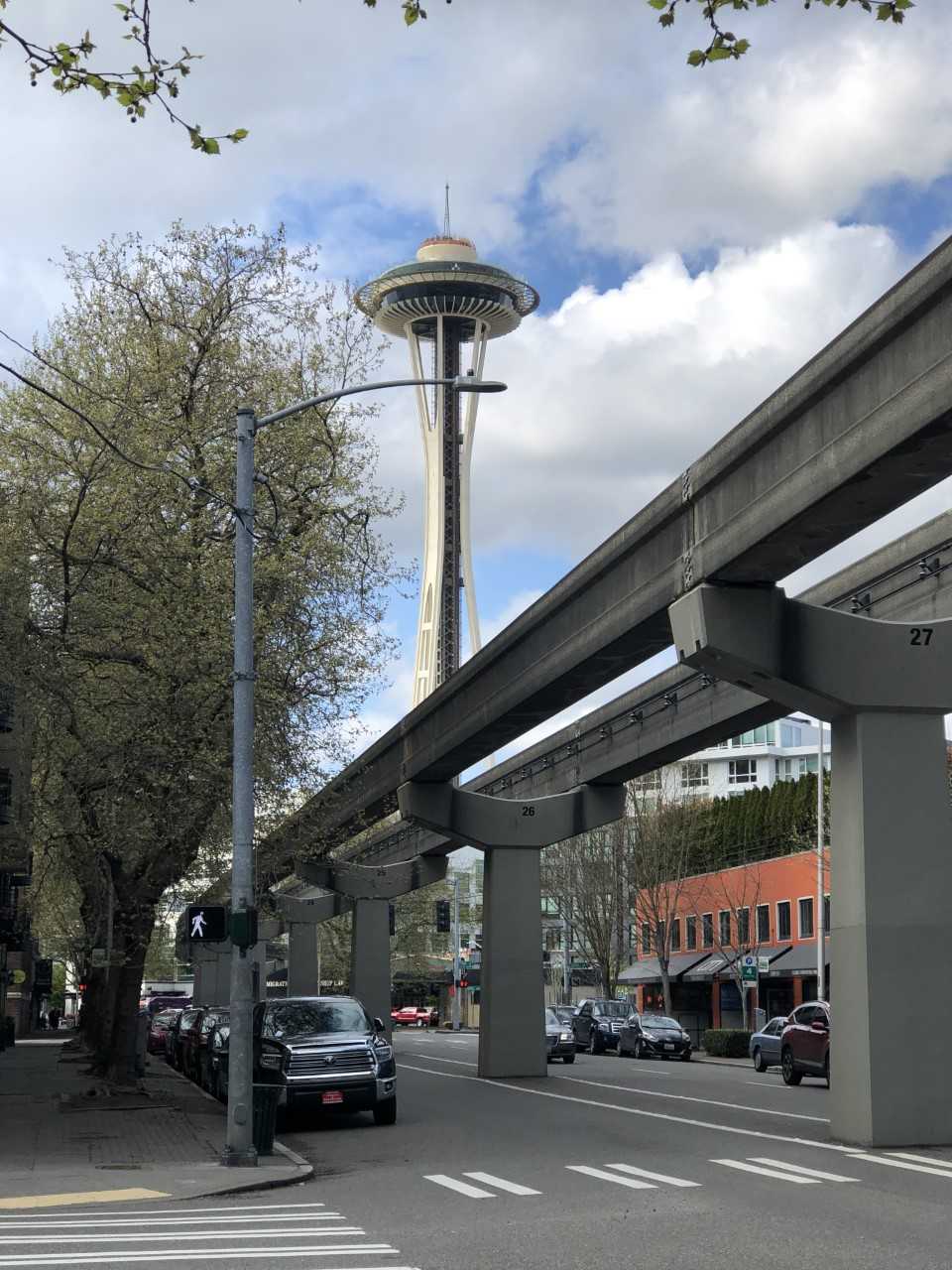 Everyone recognizes the Space Needle. I like to take pictures of city landmarks the way people who live in those cities experience them. So, when I turned a corner and saw this, I though it was the perfect image.

And, yes, here is me at Lake Union … with the Space Needle. I went to dinner with Jenny, my friends Maryska and Jeff’s niece, who took me to Duke’s Chowder House, a waterfront institution. 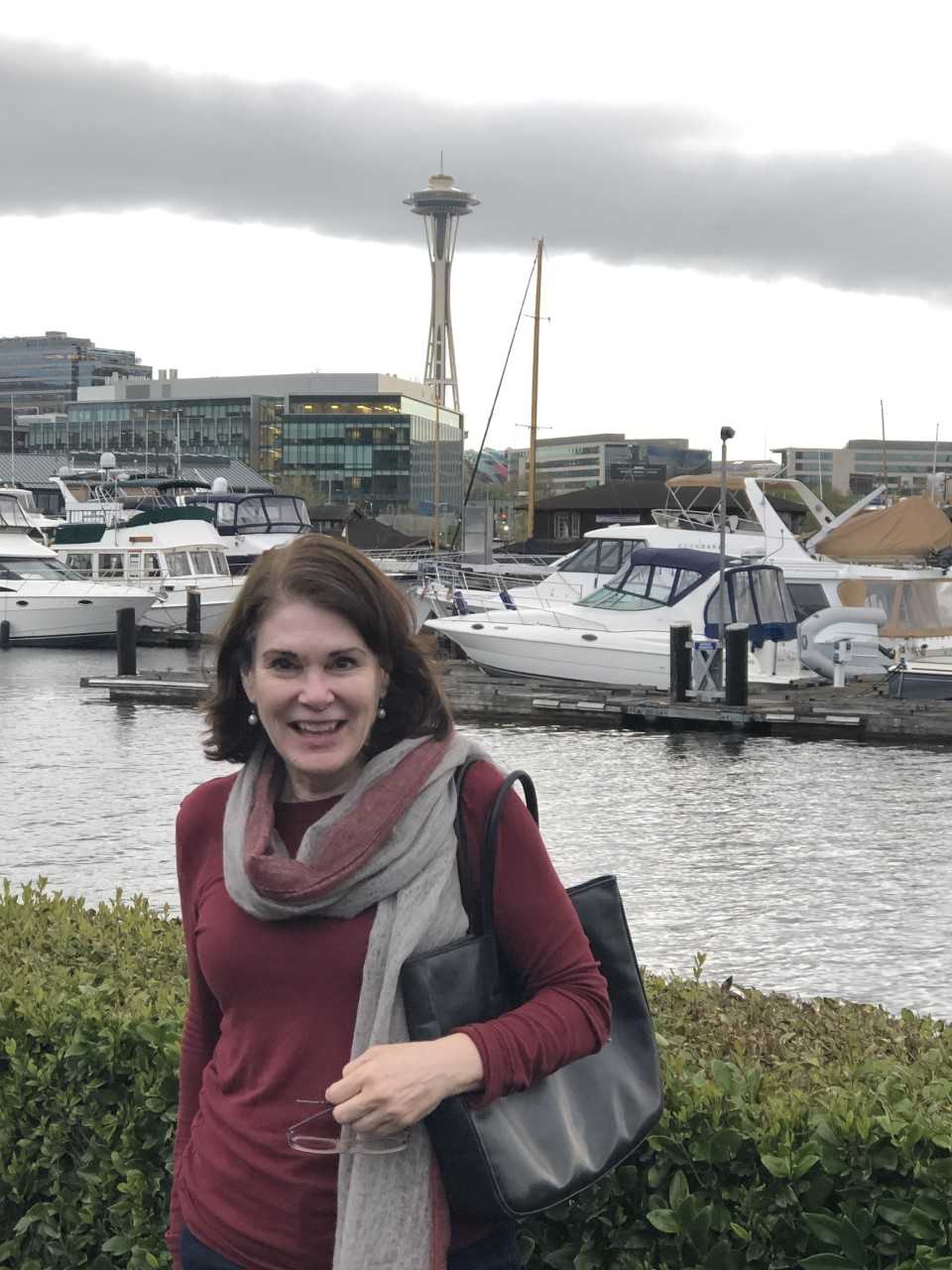 The Space Needle was built for the 1962 World’s Fair.

Okay, with the Space Needle out of the way, you’ve already seen that I chose for my title image a colorful fruit and vegetable stand inside Pike Market, down on Elliott Bay of the Puget Sound. The market opened in 1907 and has kept its character,

The market is as iconic as the Space Needle but harder to capture in a single image. 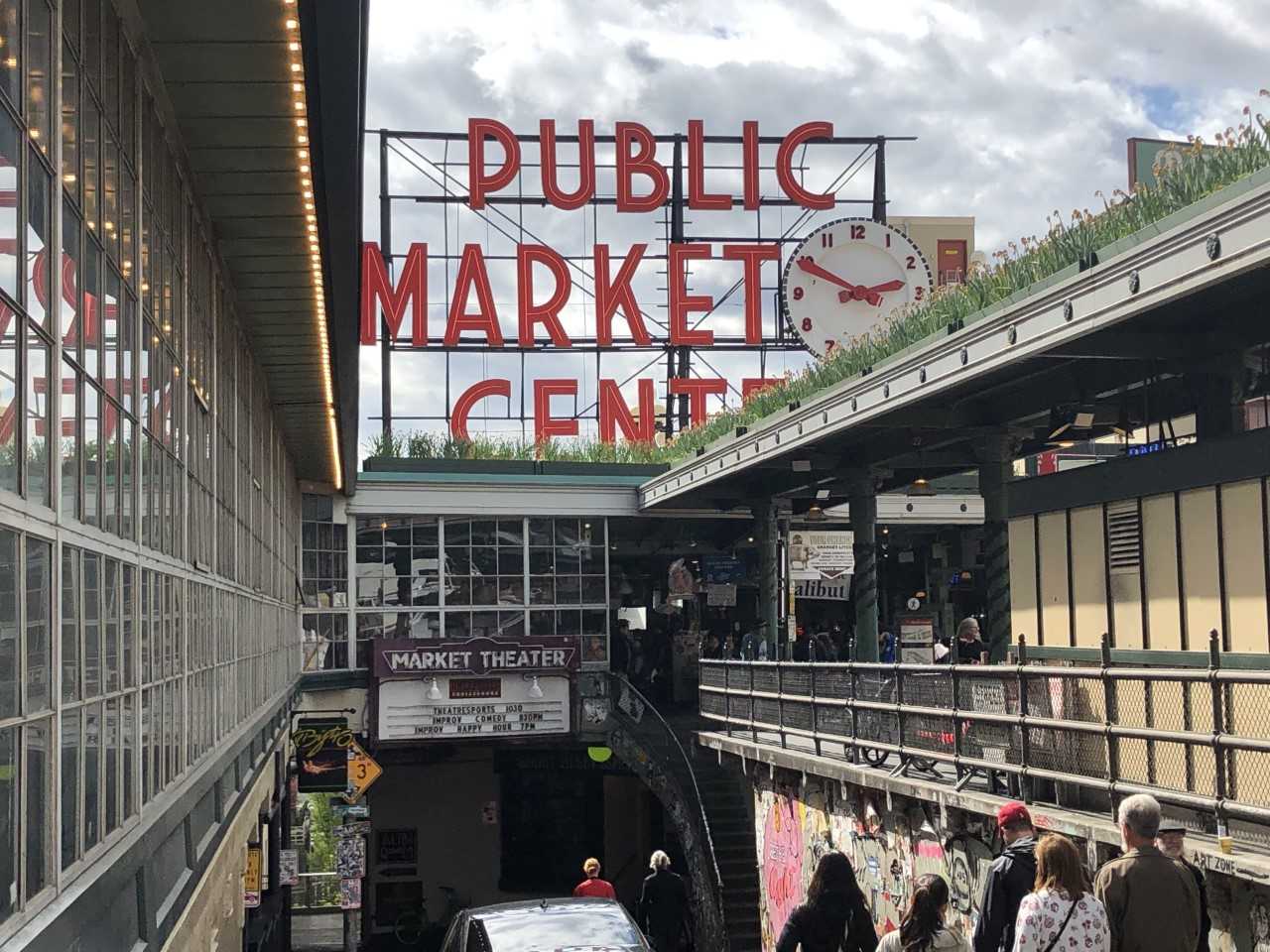 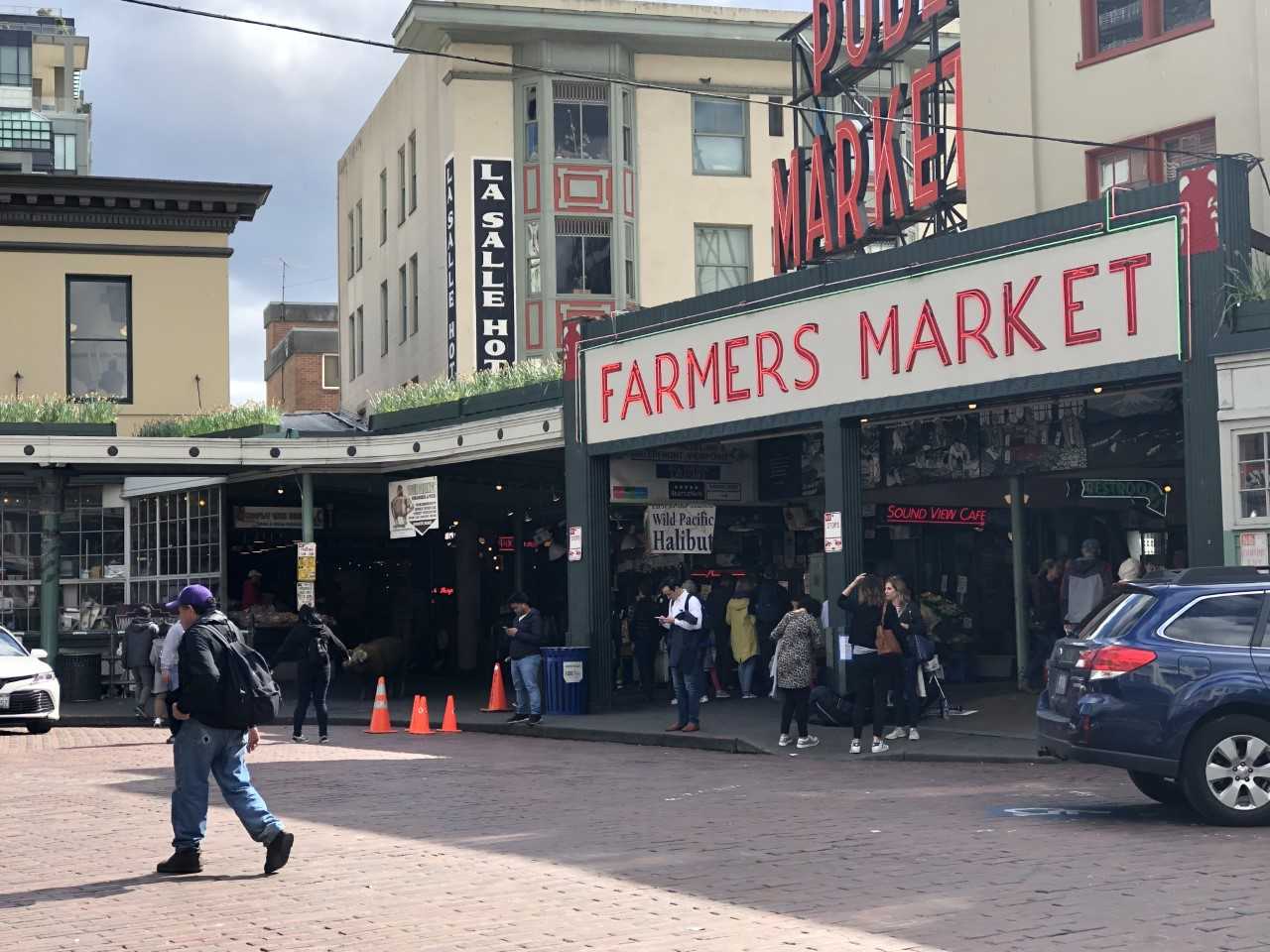 Once again, inside the market: 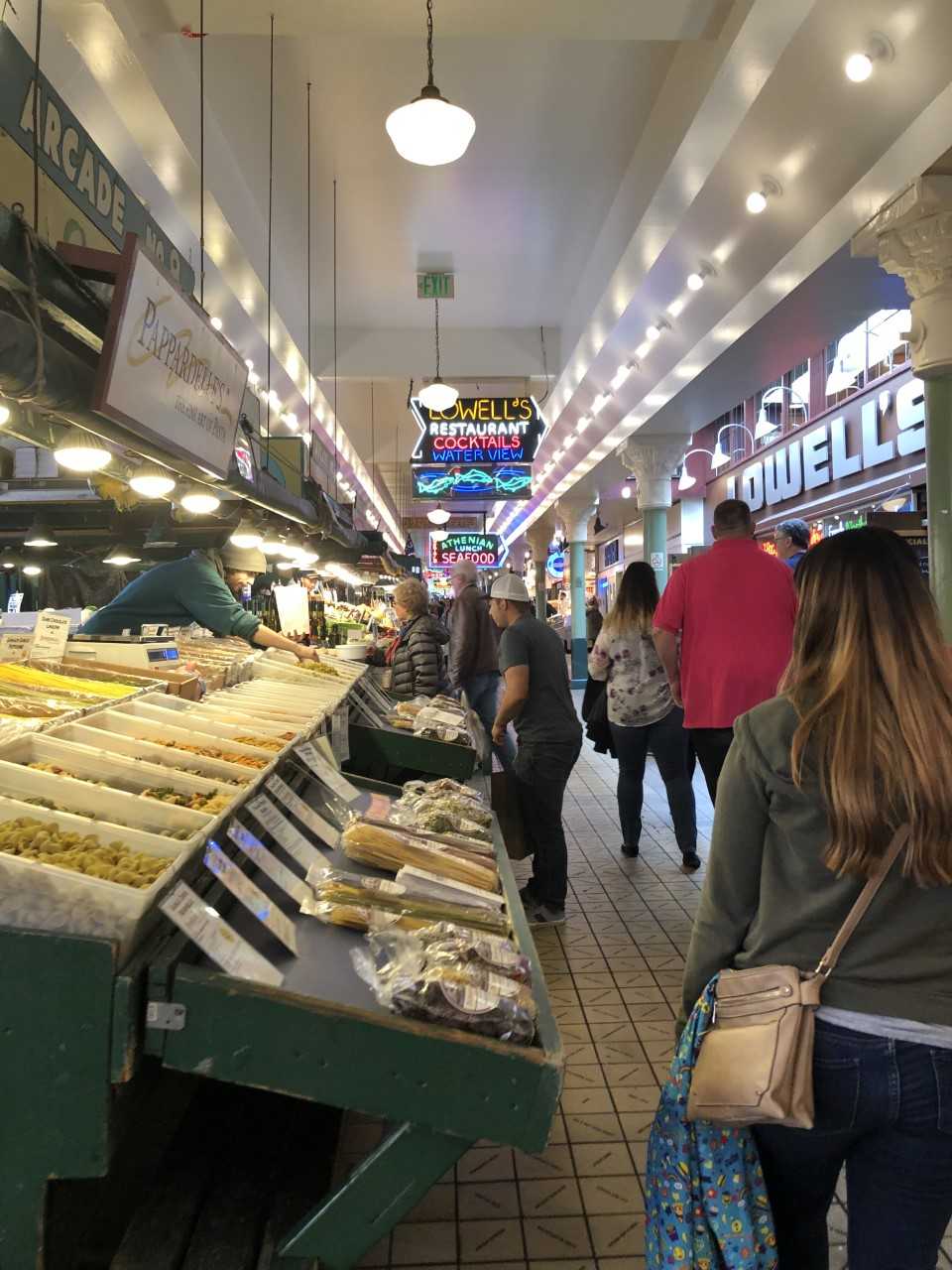 When I think of Seattle, four retail giants come to mind: Amazon, Microsoft, Nordstrom and Starbucks. Then there’s Boeing, an airplane manufacturer. And lately the online companies Expedia (travel) and Zillow (real estate) have become well known. These last two are the brain child of Rich Barton.

Because I lost a day to visit Seattle while grounded in Durham, I didn’t have time to visit the campuses of Amazon and Microsoft.

However, I did visit Nordstrom, primarily because the minute I opened my suitcase in Seattle, I realized I had forgotten to pack socks. So why not buy a pair (or a pack) of socks at Nordstrom’s? Which I did on my way to Pike Market. 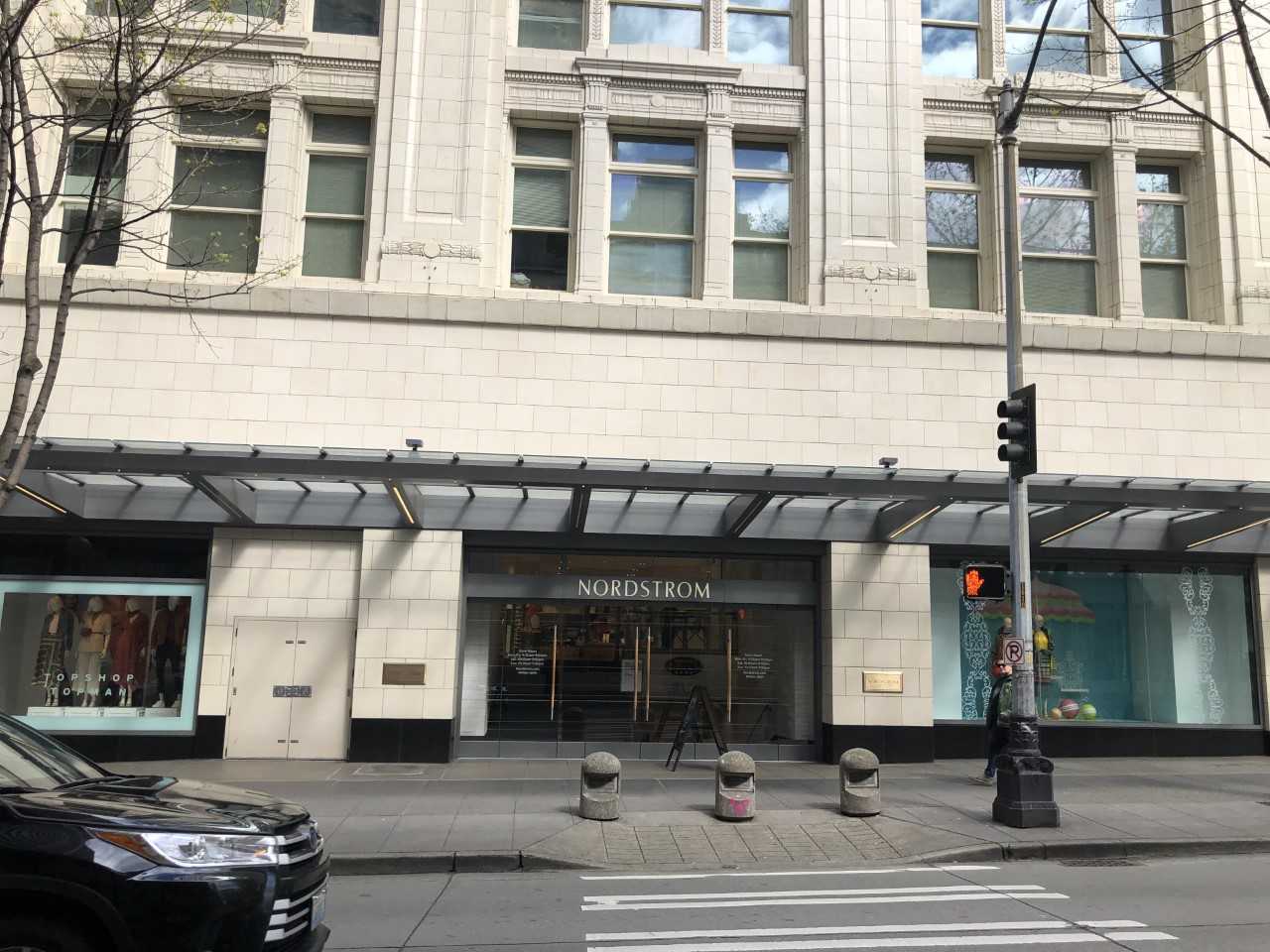 I did say in my previous blog “Packing for a long trip” that I always pick up stuff along the way. In addition, my sock stash at home was depleted, which is probably why I didn’t think to pack any

Once at Pike Market, I also went into the original Starbucks on the corner of Pike and First. 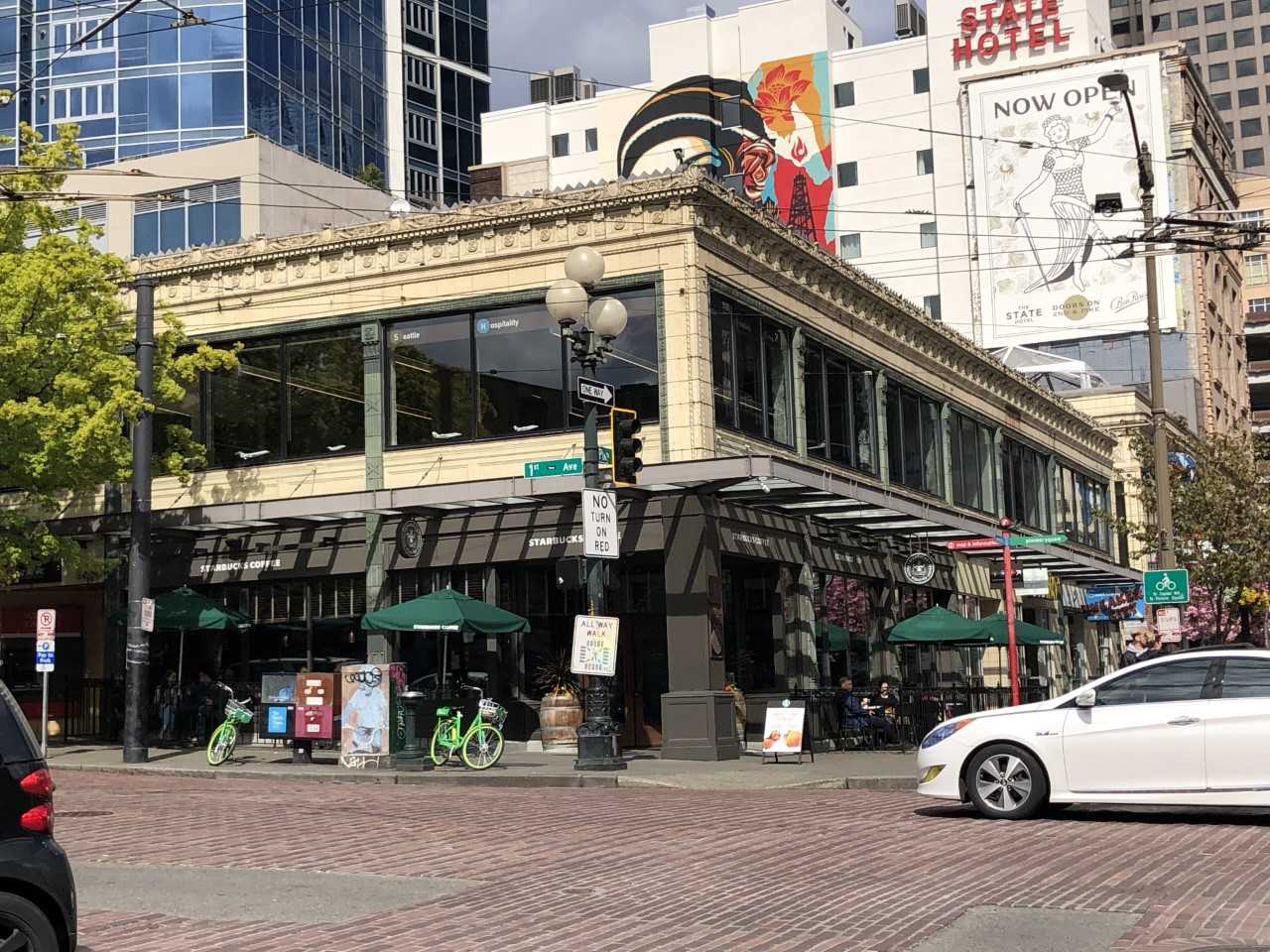 It’s across the street from the Farmers Market sign, pictured above. 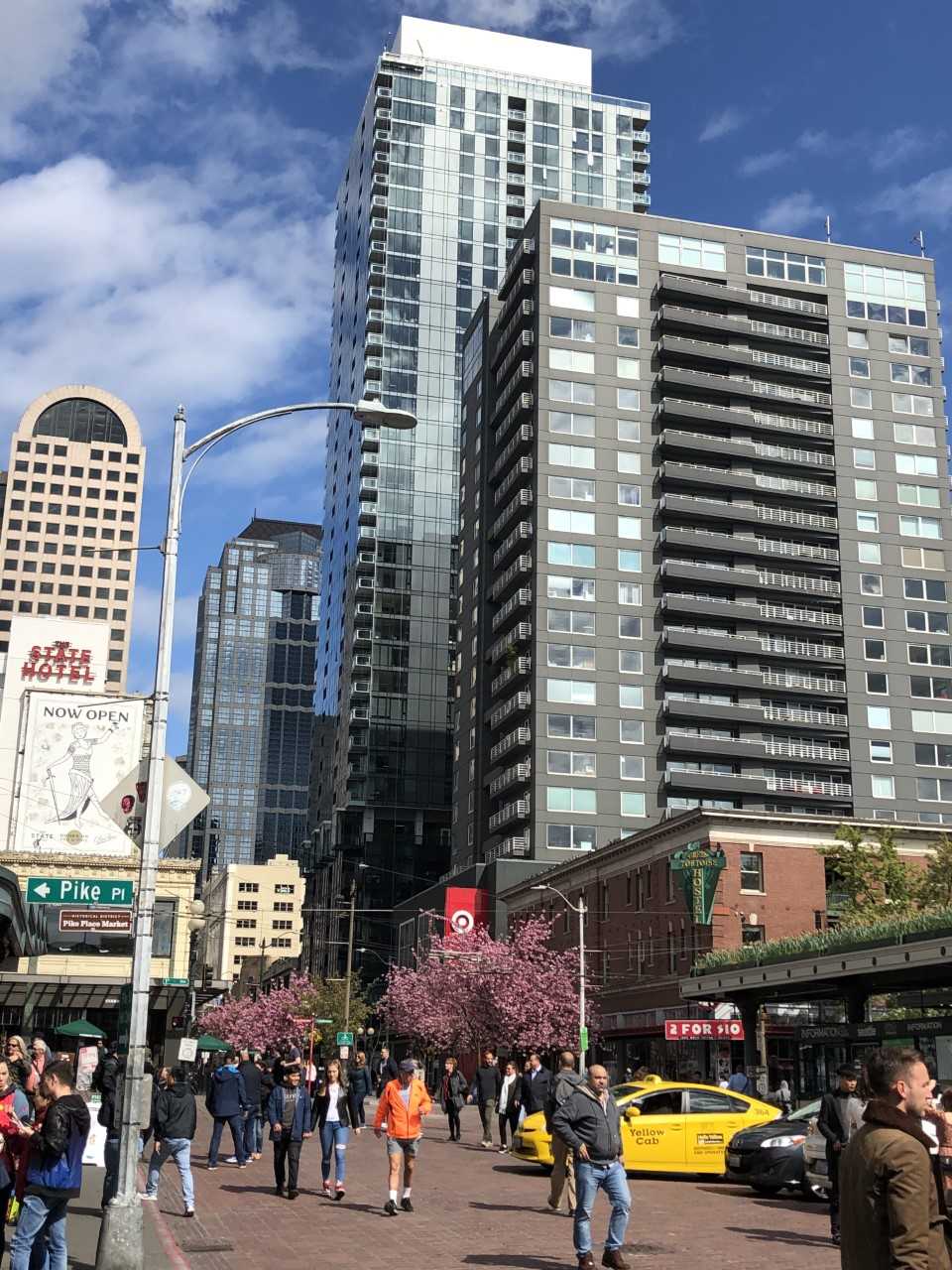 The Farmers Market sign is behind me. Starbucks is in the lower left corner of the image. You can see two of their green umbrellas.

The result of my two retail experiences is this: 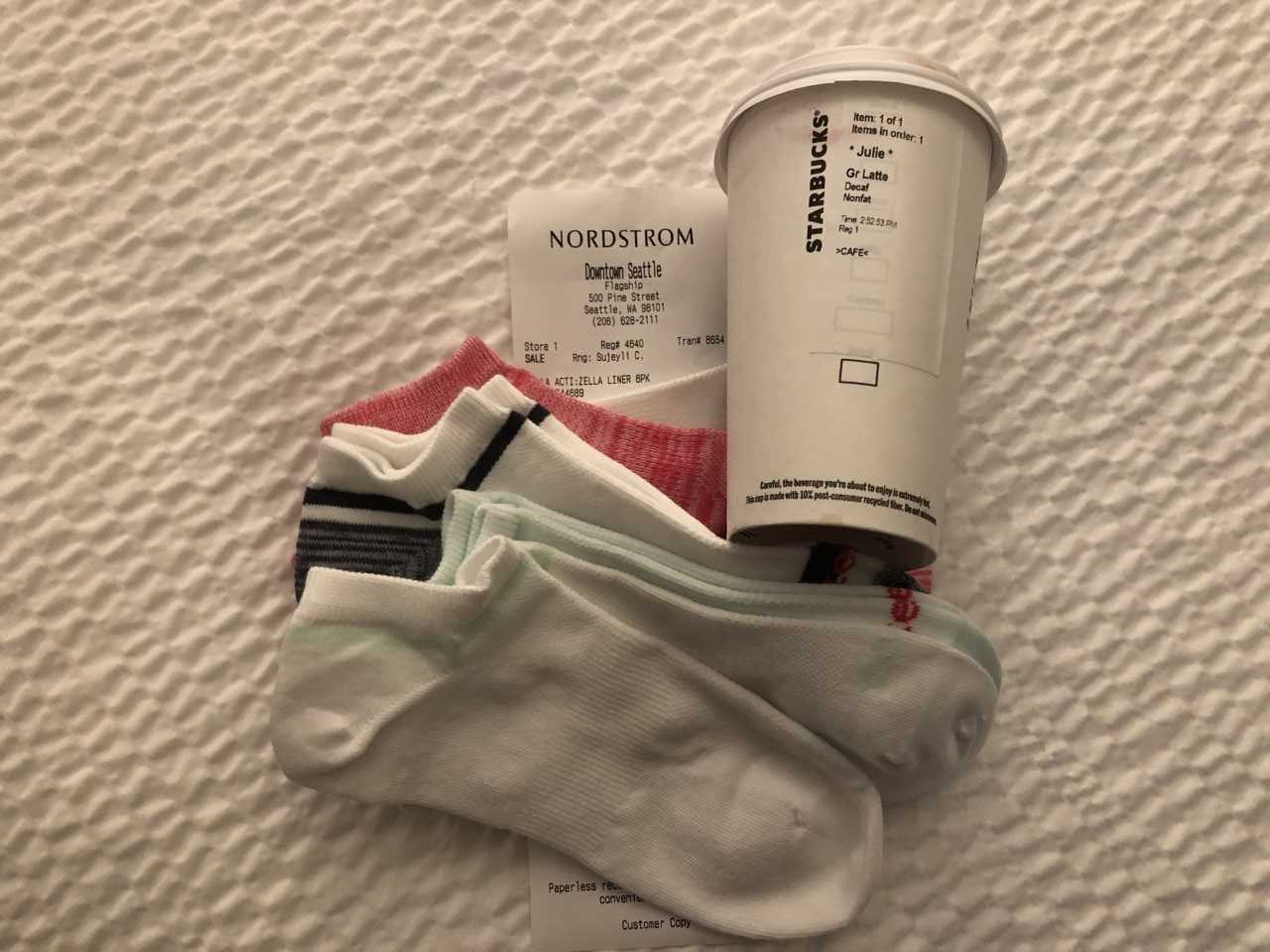 I don’t drink coffee, so I made sure it was decaf. The Nordstrom receipt declares proudly “Downtown Seattle Flagship”

Lots of places downtown still have an old-timey feel. Pike Street and First Street, for example. And for old-timey atmosphere that comes with coffee, Starbucks isn’t the only game in town. I happened on this cutie in my wanderings. 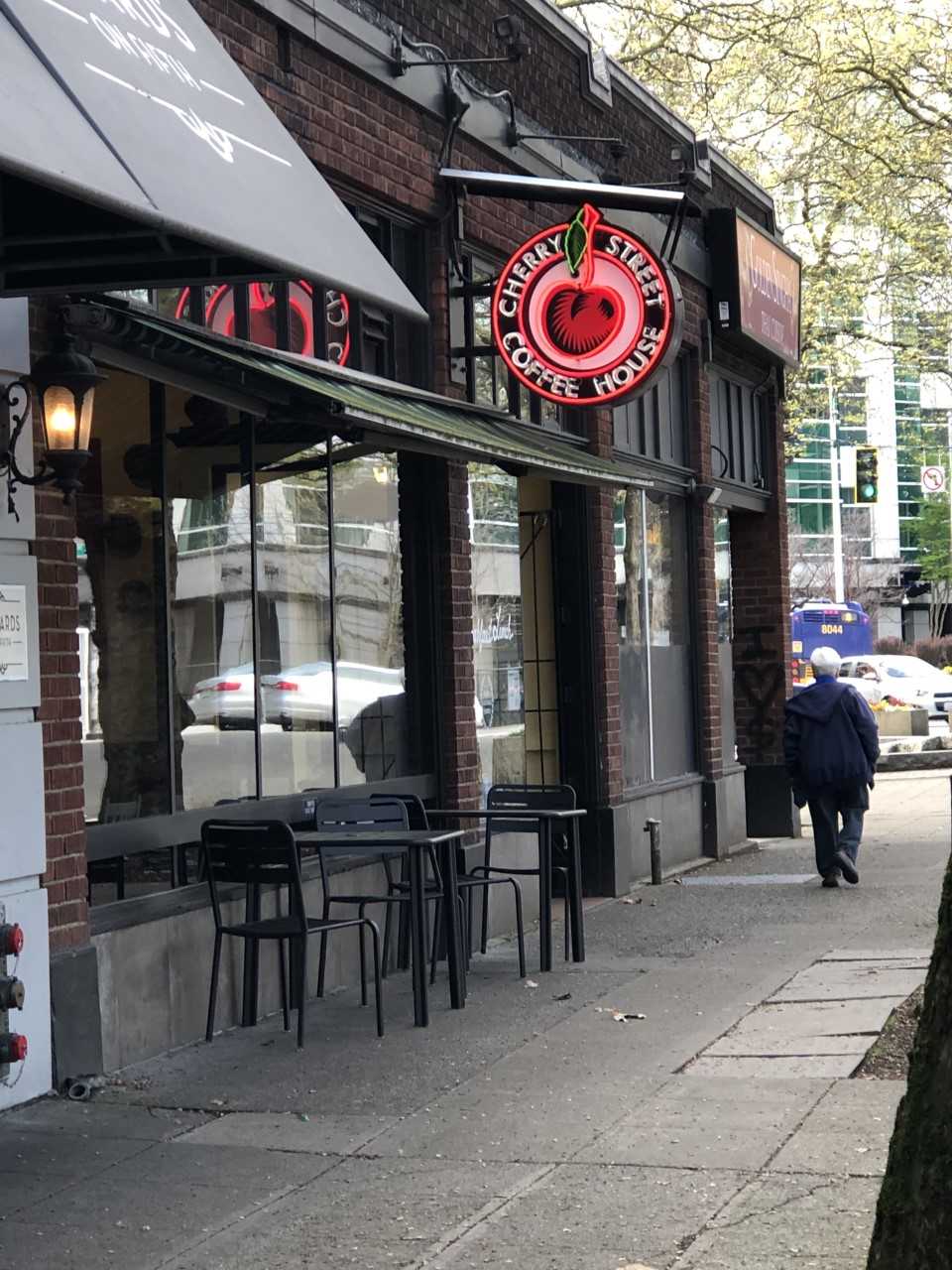 Around the corner from which is Tilikum Place, with a life-sized statue of Chief Seattle: 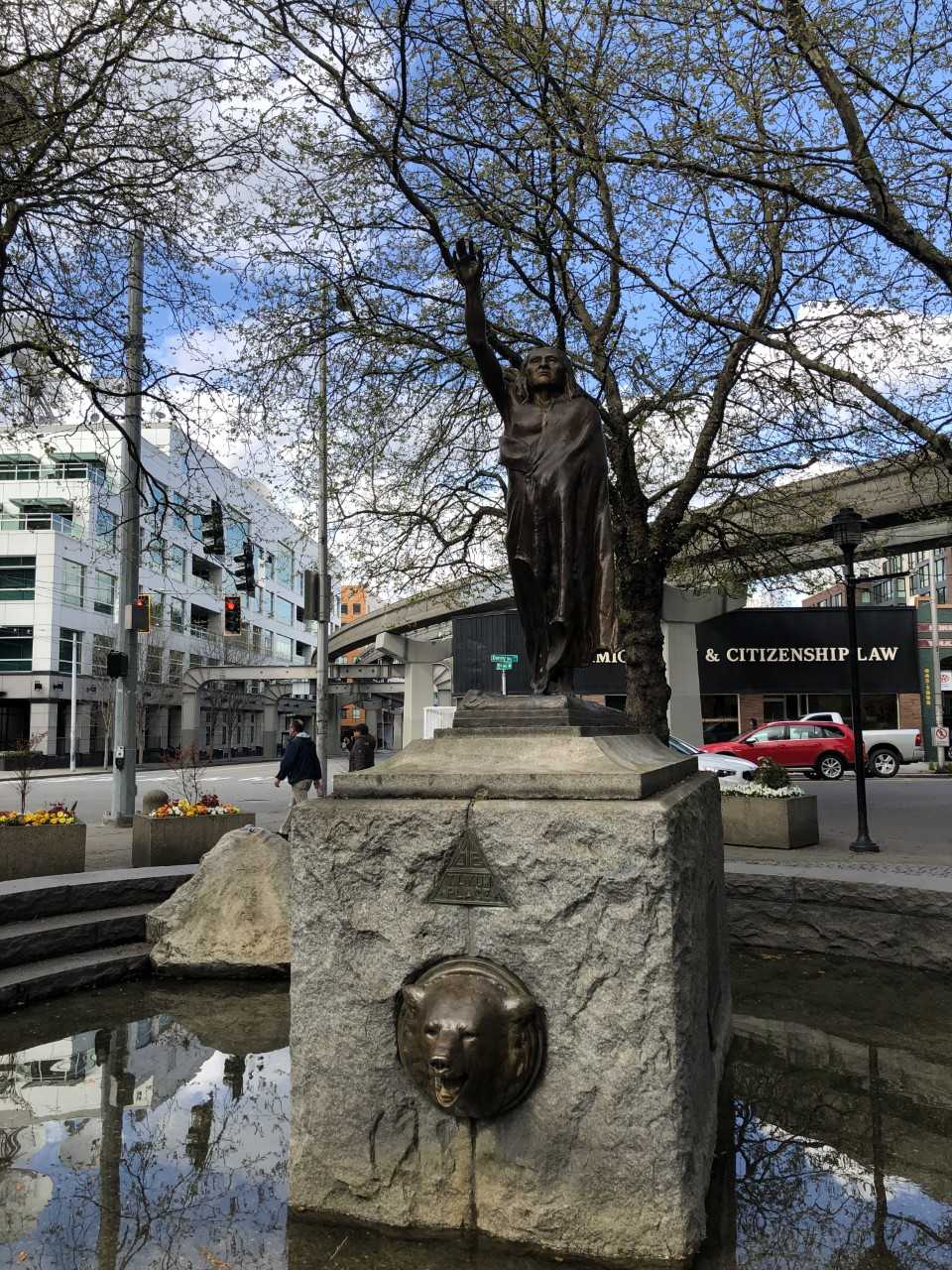 He presides over an old-fashioned square. 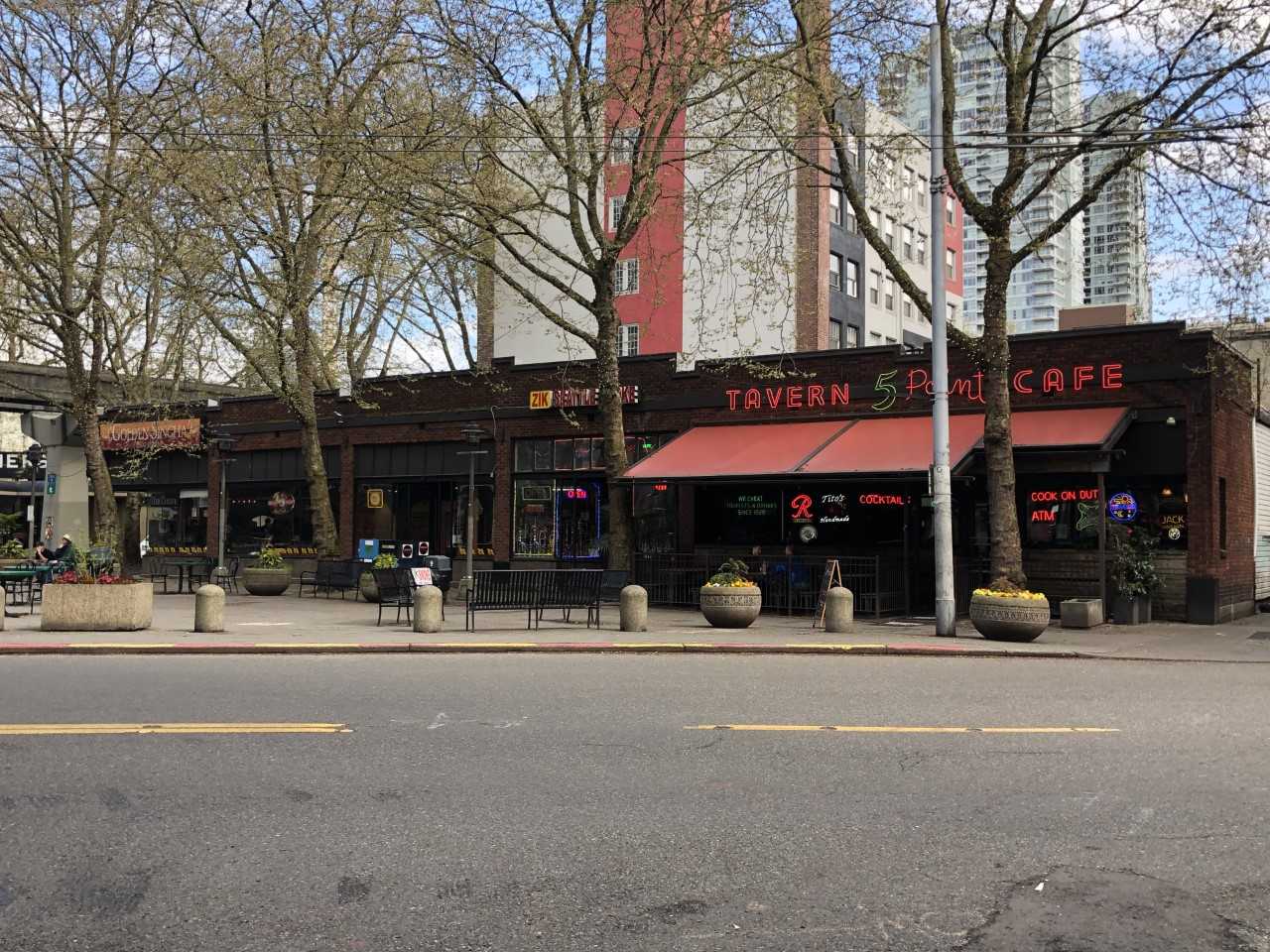 This part of town, called Belltown, has a nice feel.

Then I wandered on down Sixth Street and came upon this: 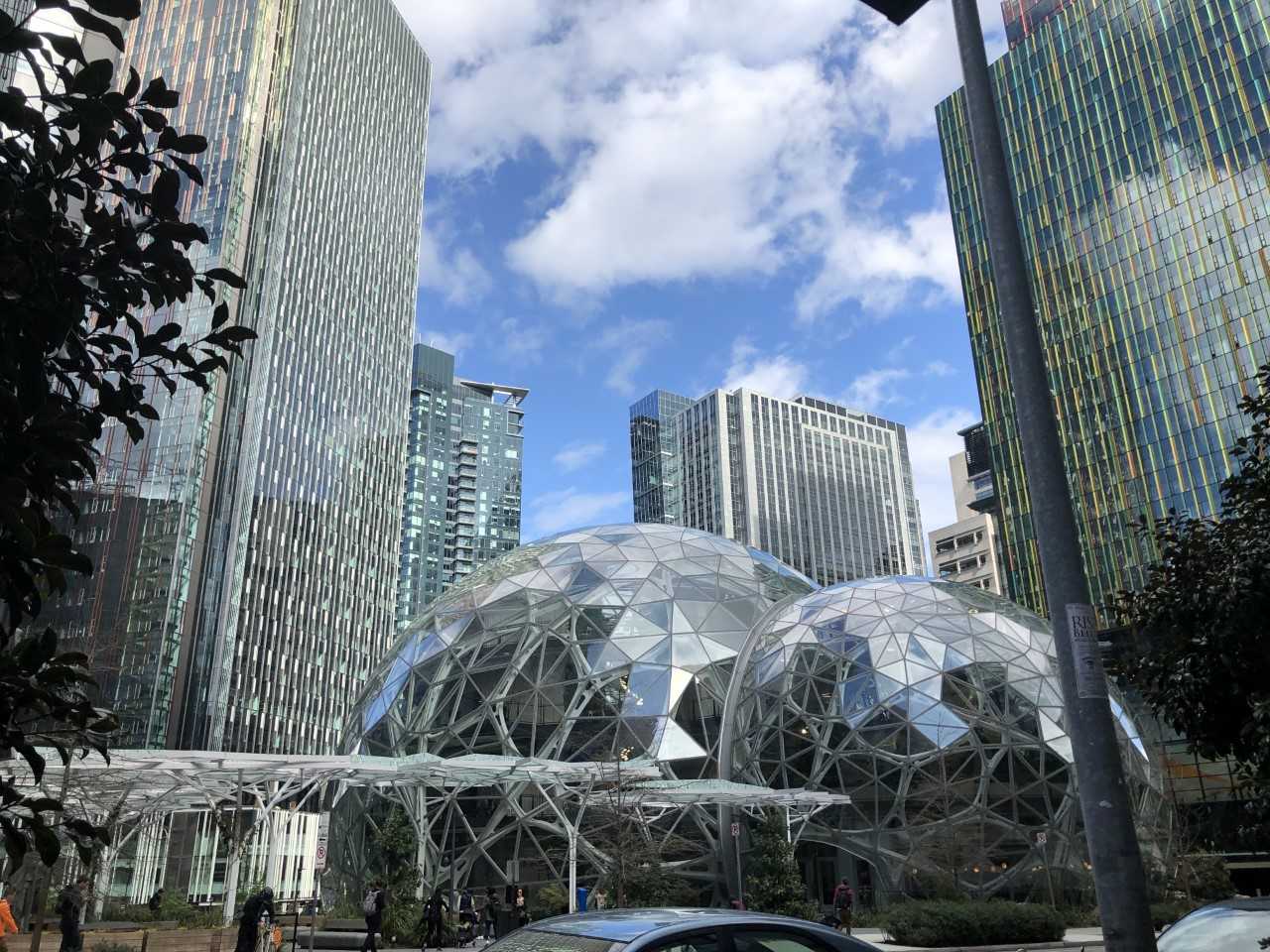 The balls are known as The Spheres

Which is next to this: 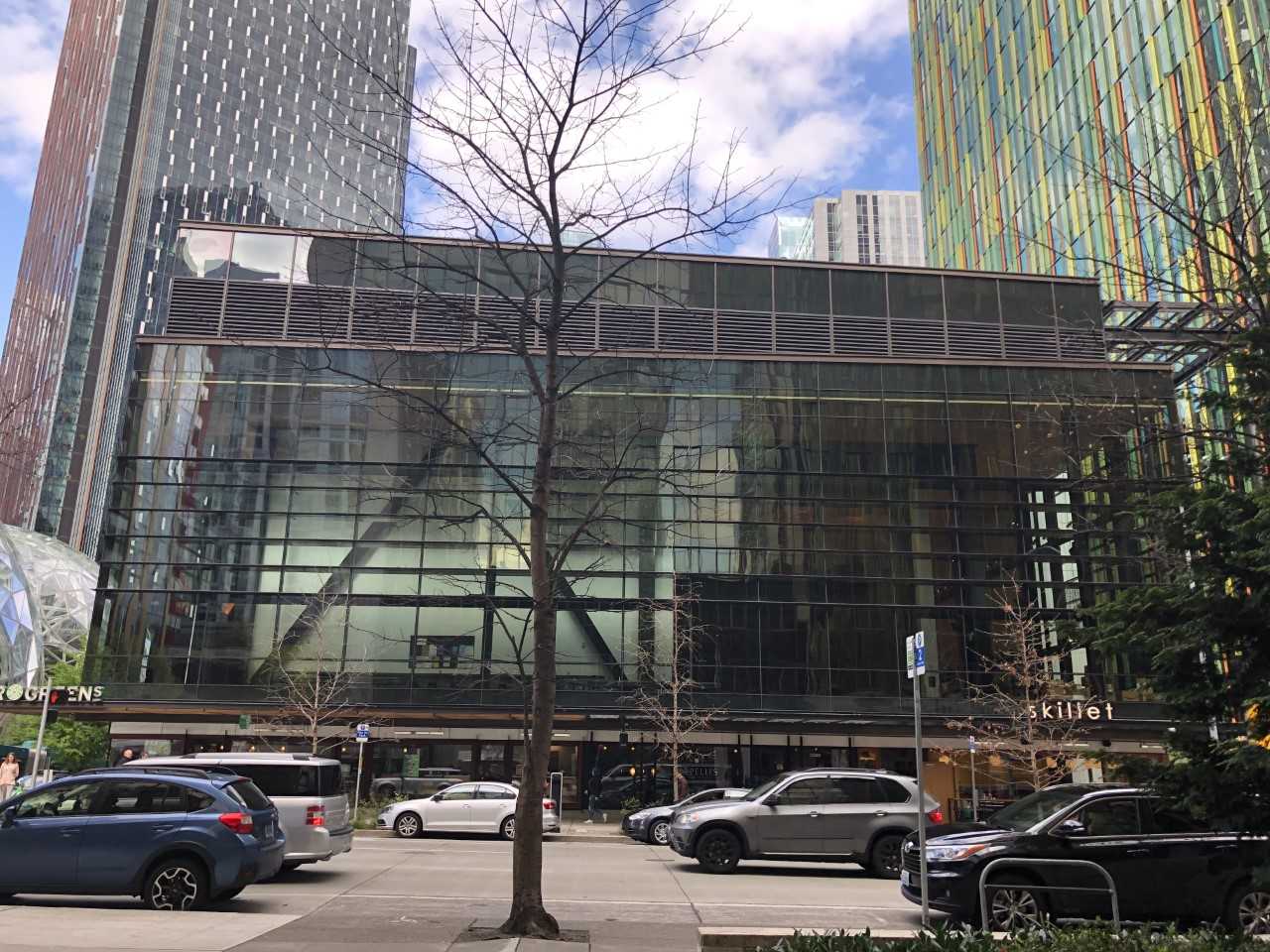 Which is next to this: 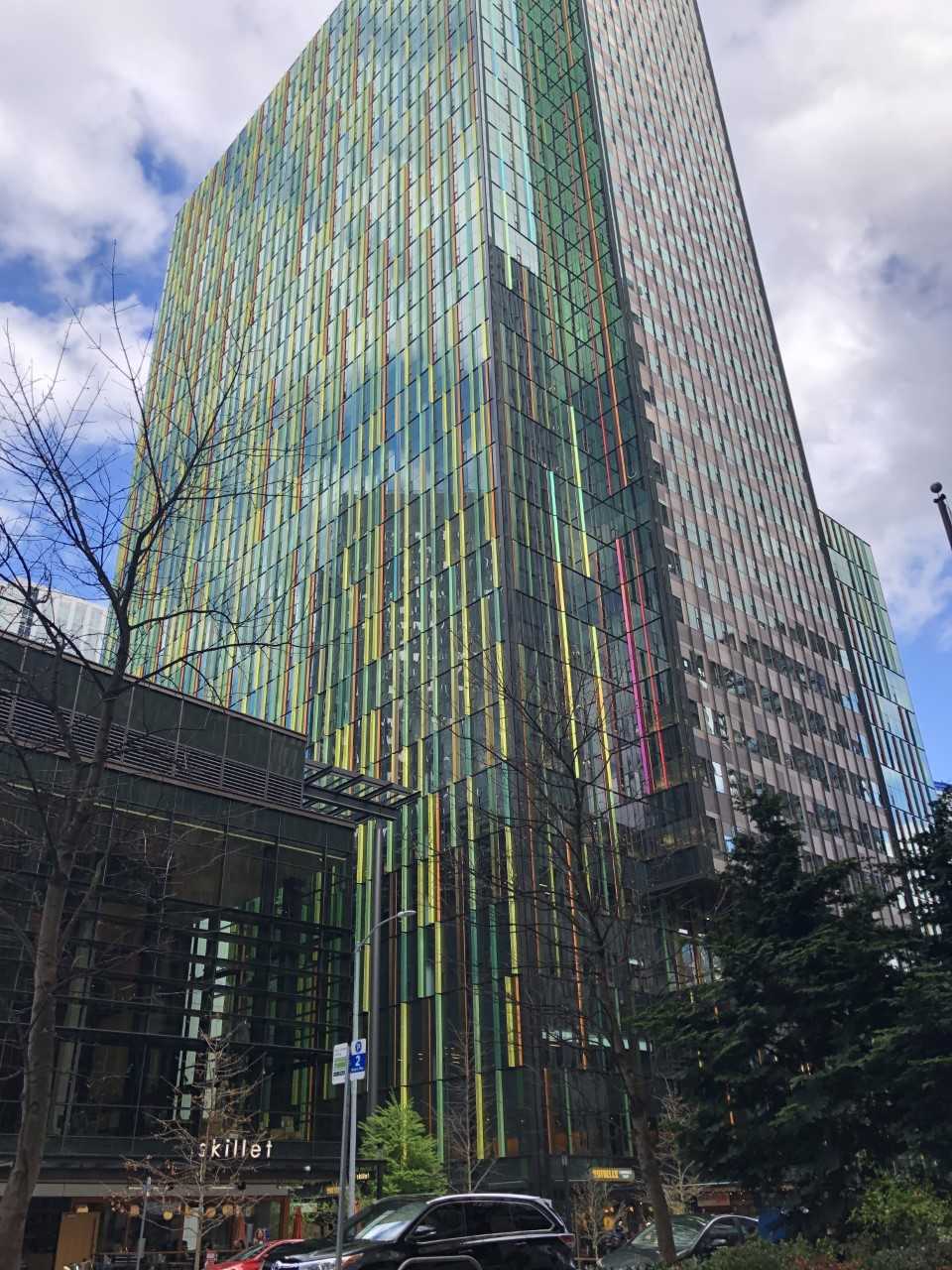 Safe to say, Seattle is in its full-blown Glass and Steel phase.

Poke is a thing. 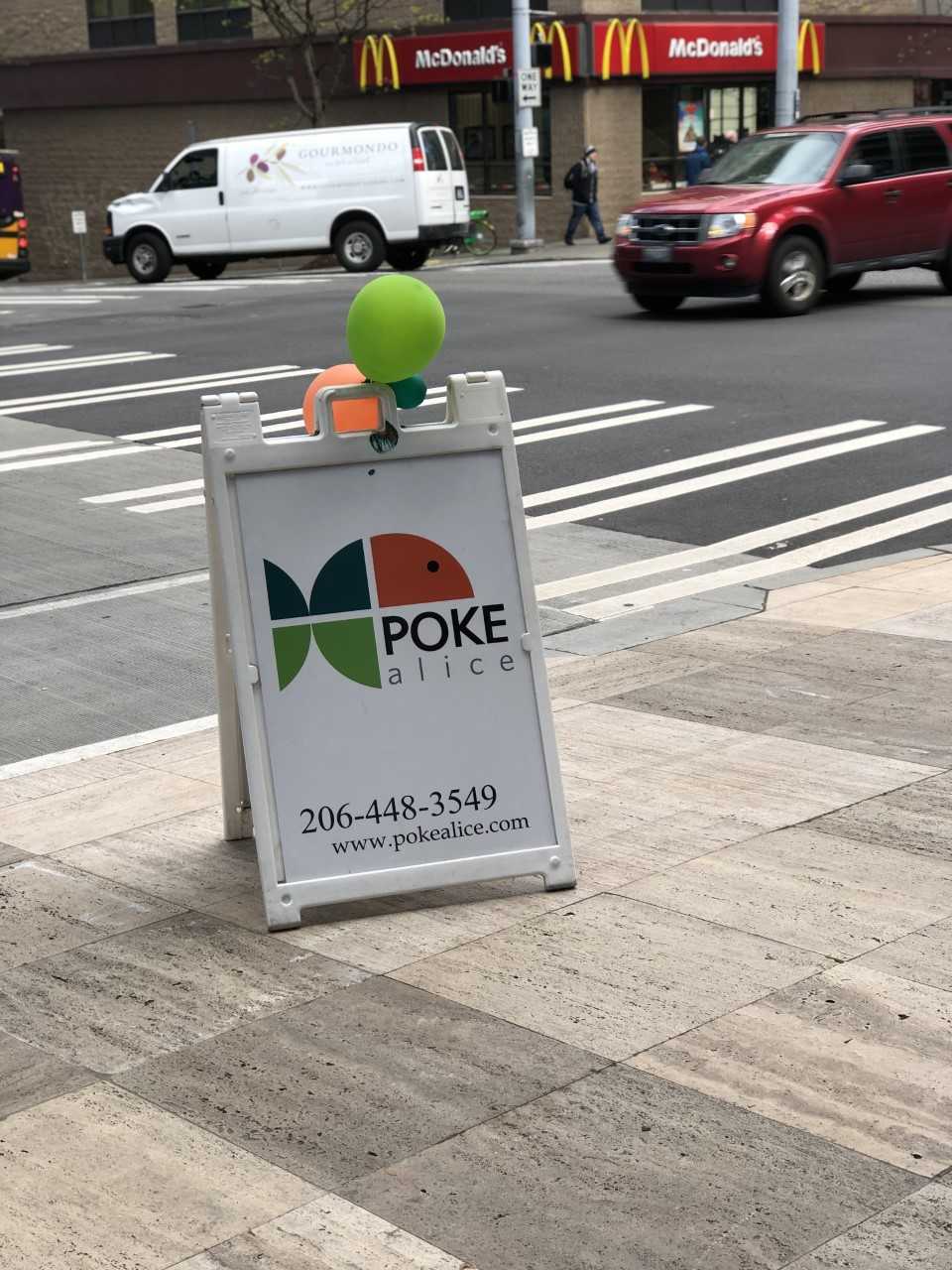 McDonald’s also apparently continues to be a thing.

For my international readers, poke is a fresh fish Hawaiian dish that has become something of a craze in the US these days. You choose from a long line of ingredients, set up like a salad bar, and they all go in a bowl. 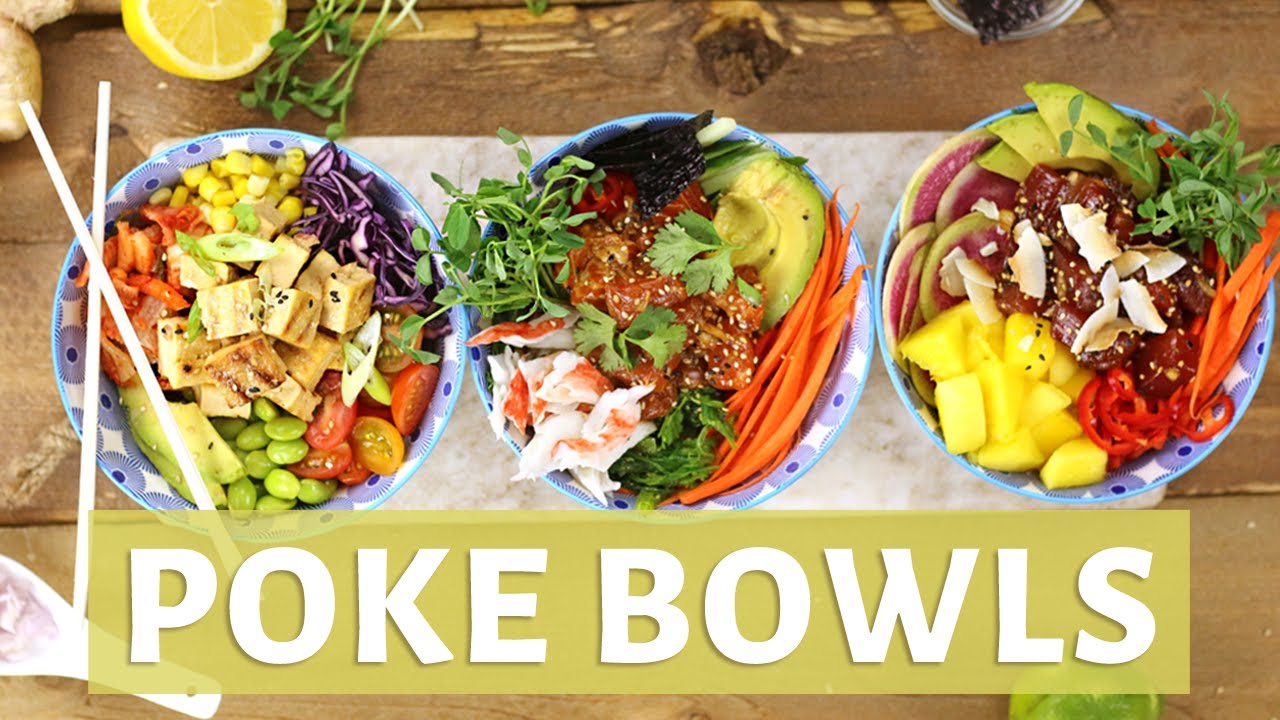 The trend started on the West Coast, but now you can find a Poke Bowl bar in the main dining hall at Duke University as well as a Poke restaurant in my very own condo building, One City Center in Durham NC.

I paid my respects to Jimi: 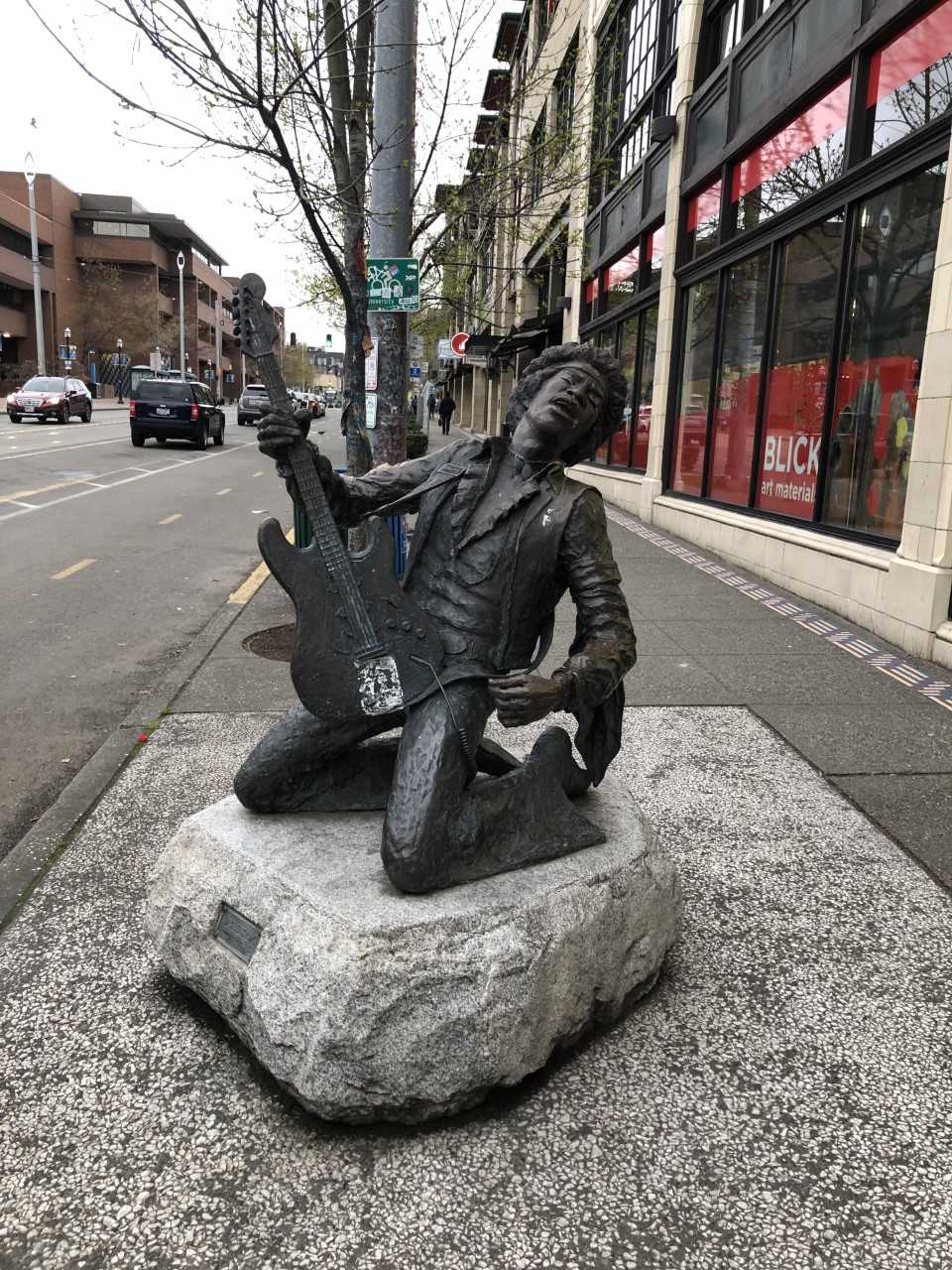 His statue is very near the corner of Pine and Broadway

Cobain’s “It Smells Like Teen Spirit” (1991) is still a good song. In the video I like that the cheerleaders have pompoms to wave while the guys have their hair.

It feels remiss not to mention the extraordinary glass artist Dale Chihuly, who has his studio in Seattle. Unfortunately, I didn’t have time to visit it.

I have always been fascinated by his work. It is flat-out amazing. Check it out here: Chihuly Shop 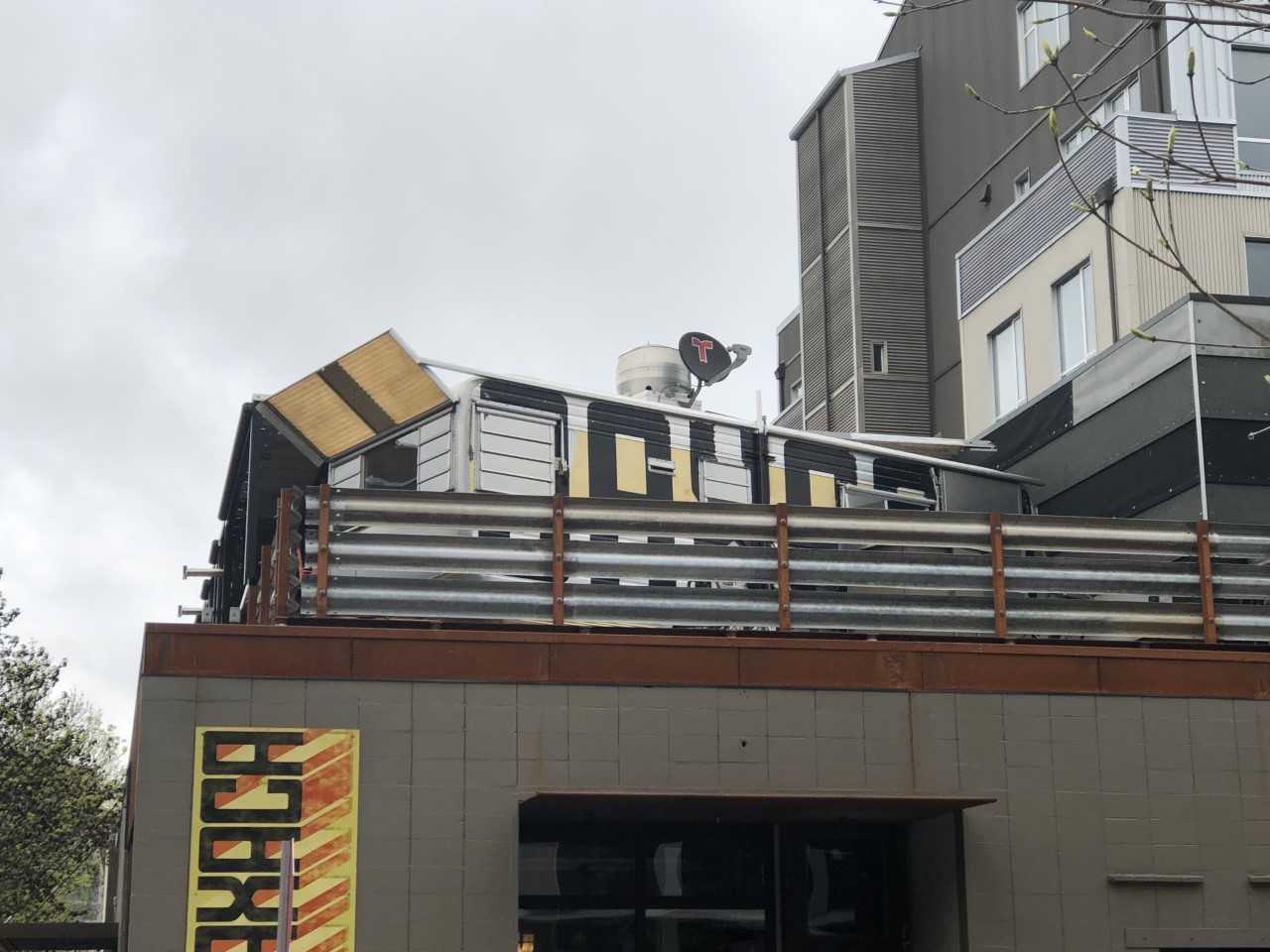