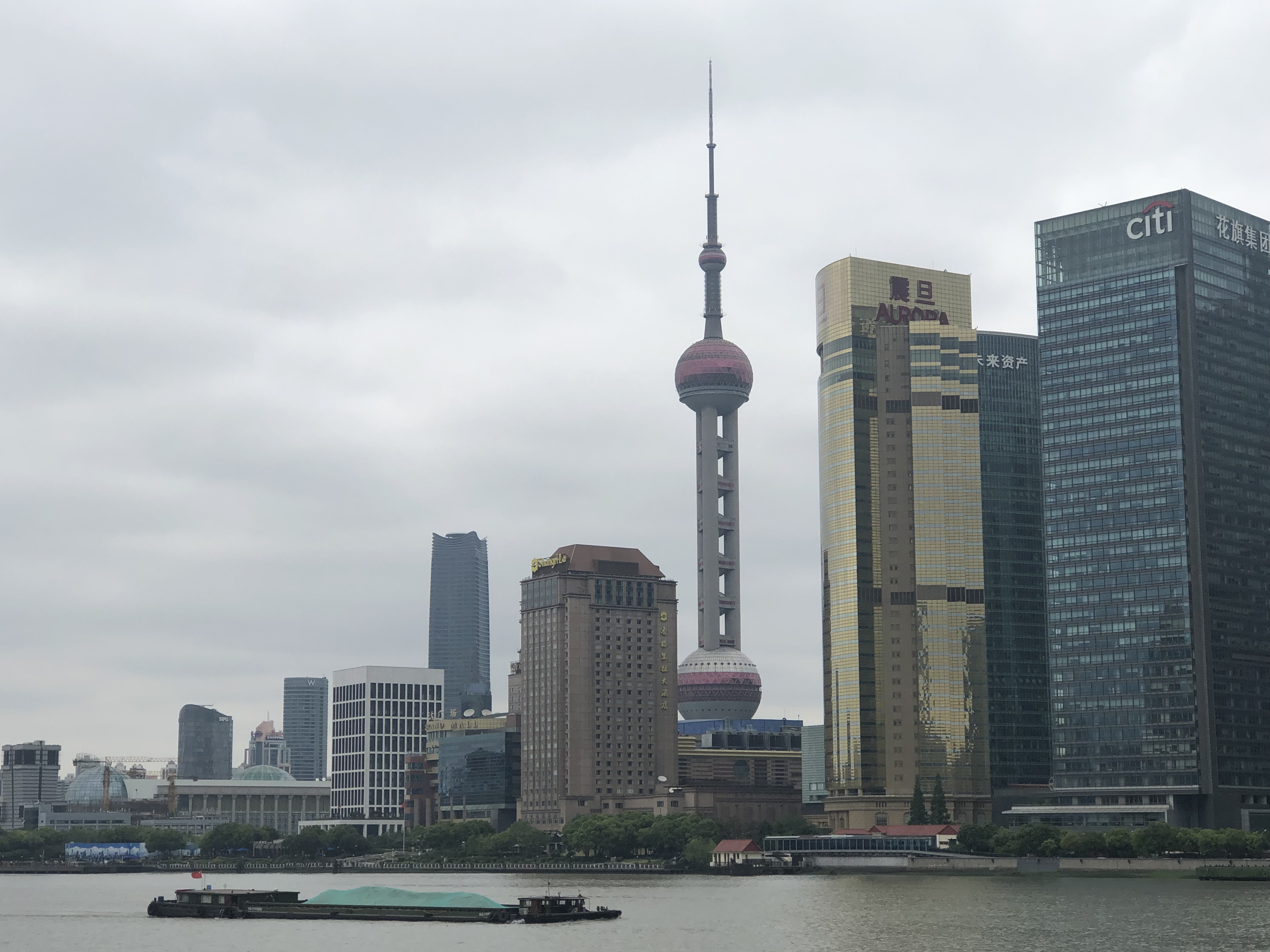 After a month in Japan, I moved on to Shanghai. For the title image I chose the Huangpu River view of the city’s financial center with the distinctive Oriental Pearl TV Tower spiking the skyline. The sky was overcast for the three days I spent here.

I did here what I normally do: wander around to see what I can see.

However, at this point in my wandering life, I have accumulated so many points with Marriott that I got an upgrade at Marriott City Center, Middle Xizang Road. Then I had to decide whether I  wanted to luxuriate in the bathtub: 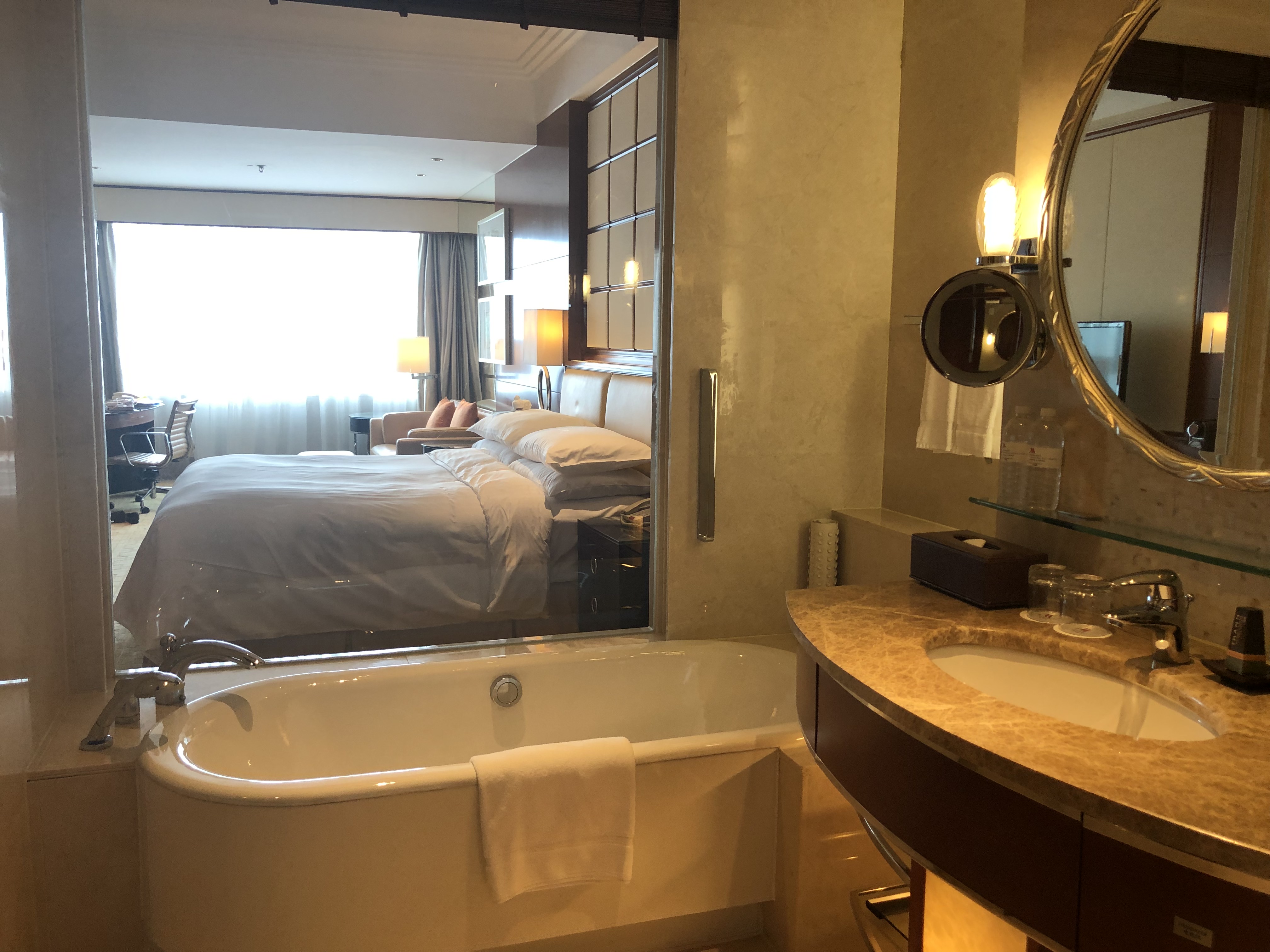 and hang out at the Marriott Executive Lounge to eat and drink instead of be a serious tourist. The first night, the Executive Lounge won out – at least, at first. And being on the 38th floor, I had a bird’s-eye views of Shanghai. Out one window is this: 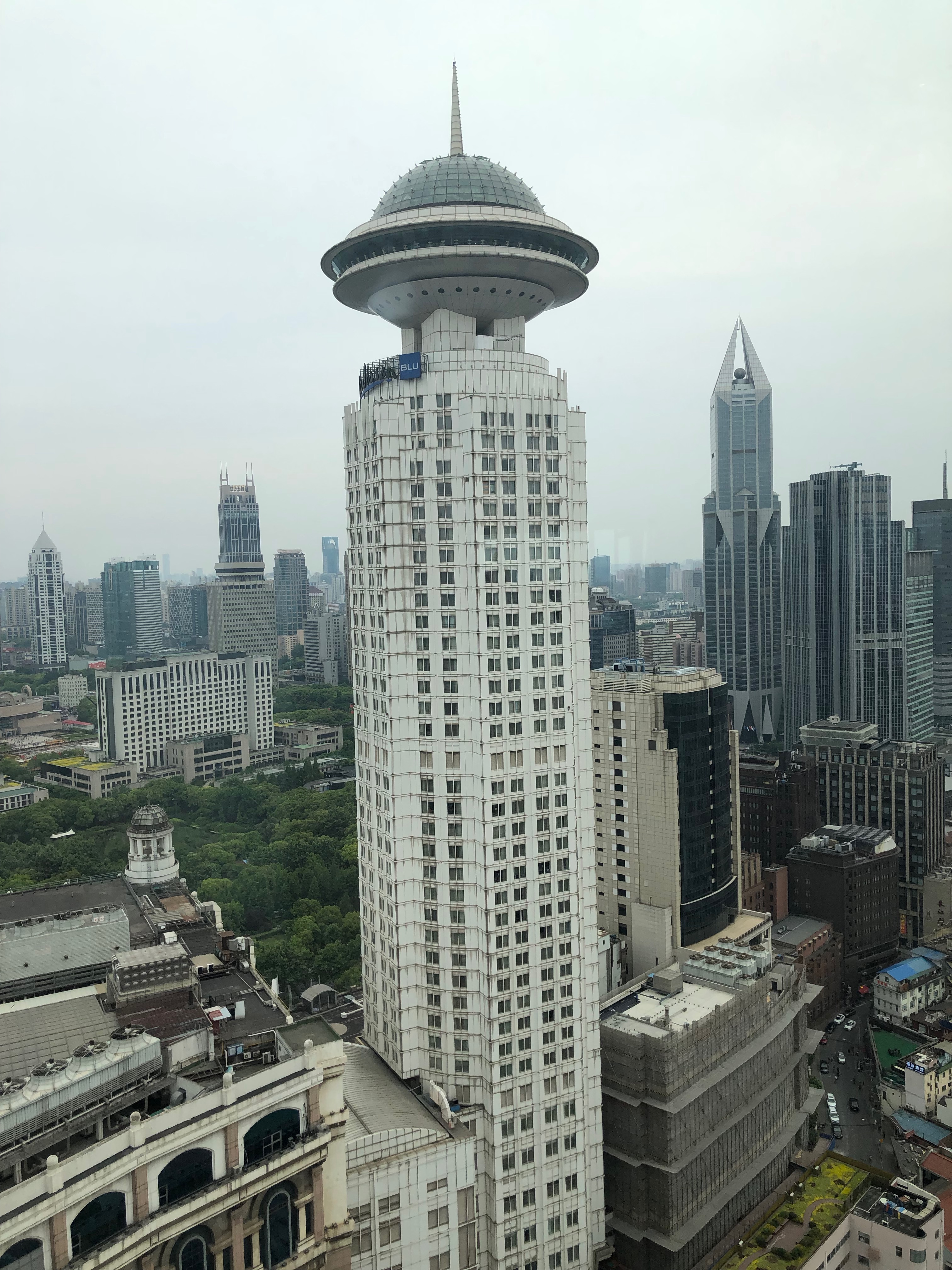 The center building, above, is a Radisson, in case you’re interested. Out another window is this: 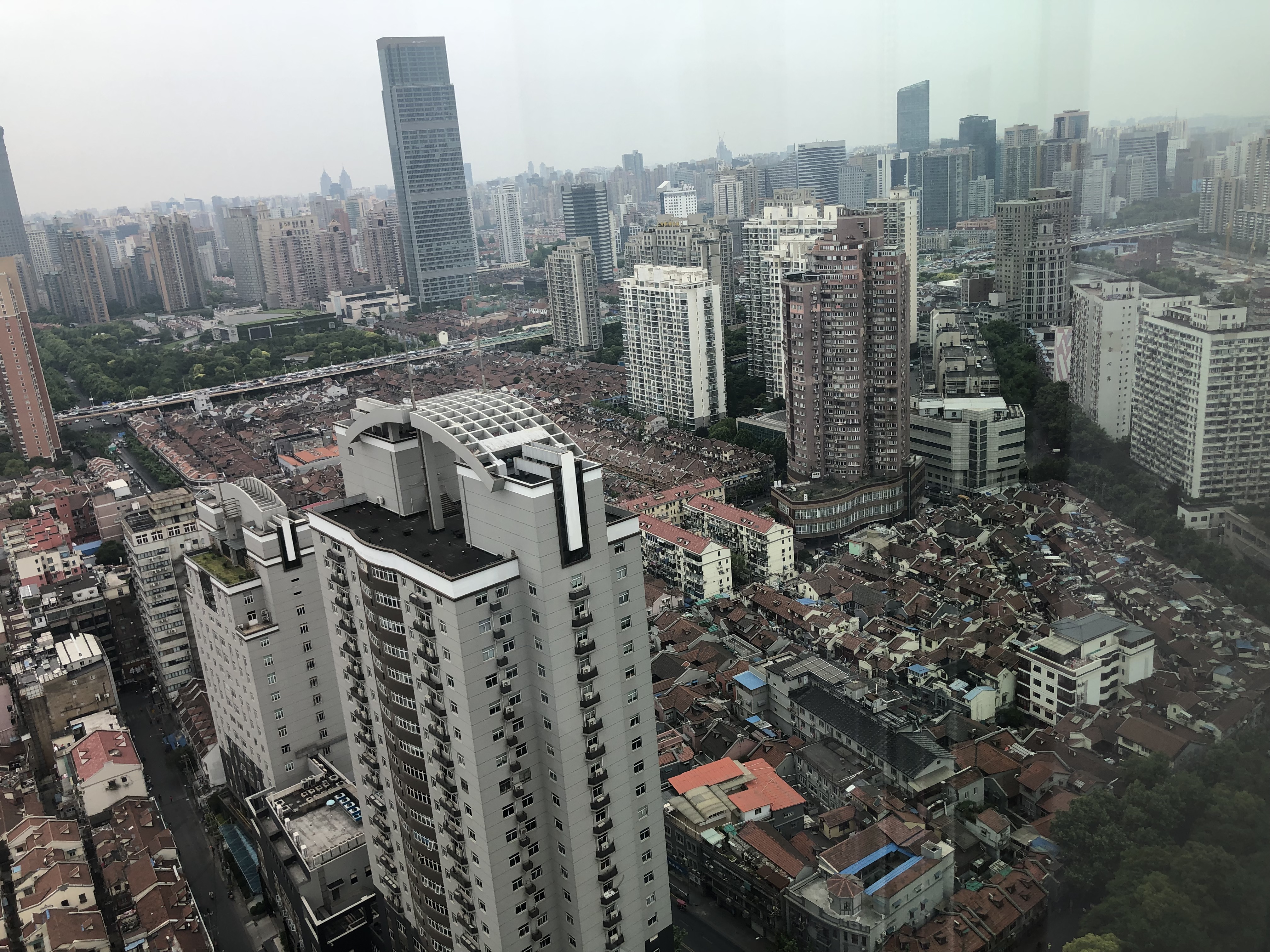 Then later, as the night descended and the lights came on, there’s this: 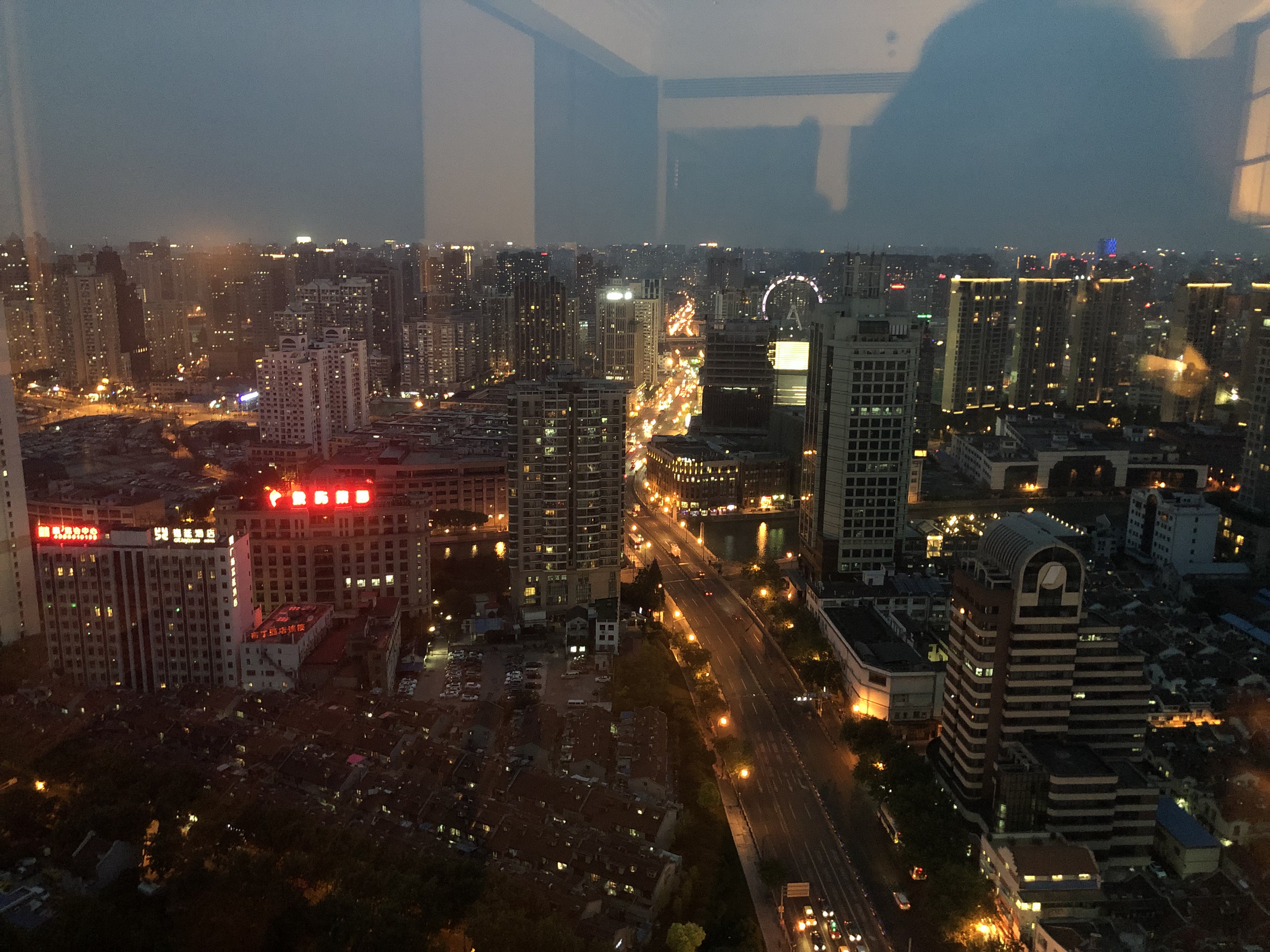 Driving in from the airport, one beholds miles and miles of this: 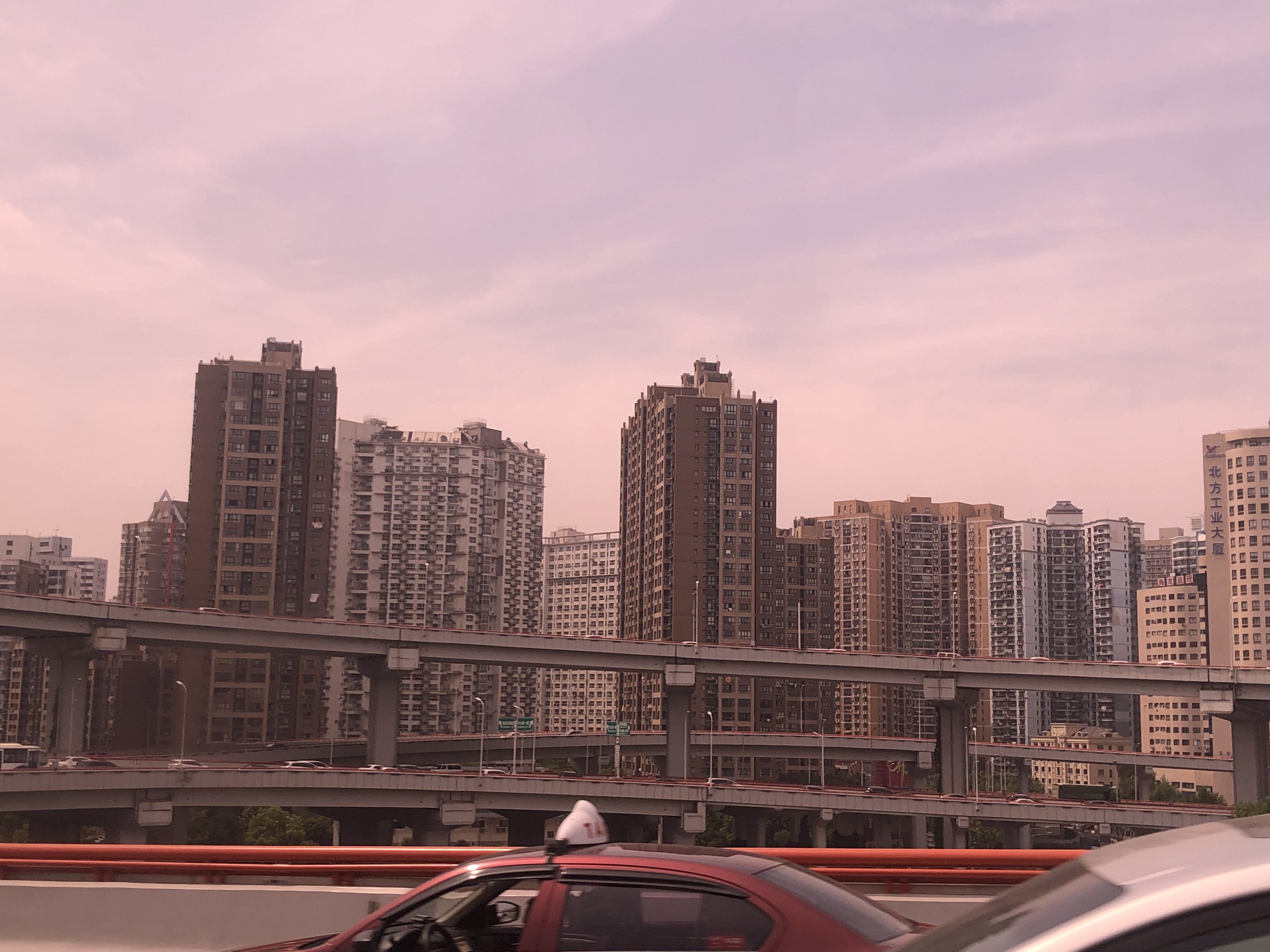 The photo, above, could be Brooklyn, for all anyone knows. Yes, New York City has a certain density of buildings, but Shanghai is thick. The above photo was taken about 2 pm. This pinkishness is really a haze. Or you could call it pollution.

Speaking of NYC, across Middle Xizang Road is East Nanjing Road, a pedestrian shopping zone several city blocks long. I could only think of it as Times Square on steroids. 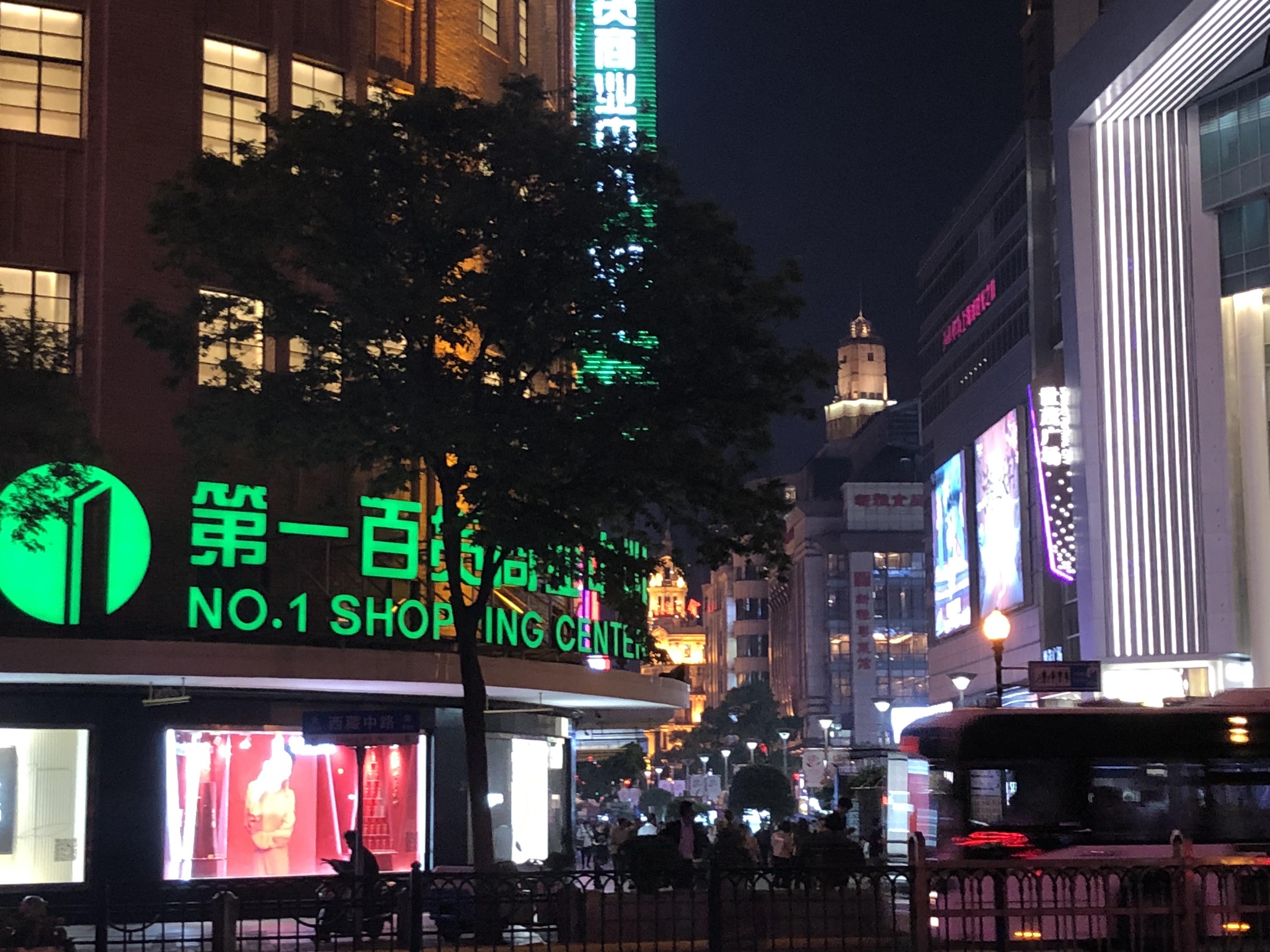 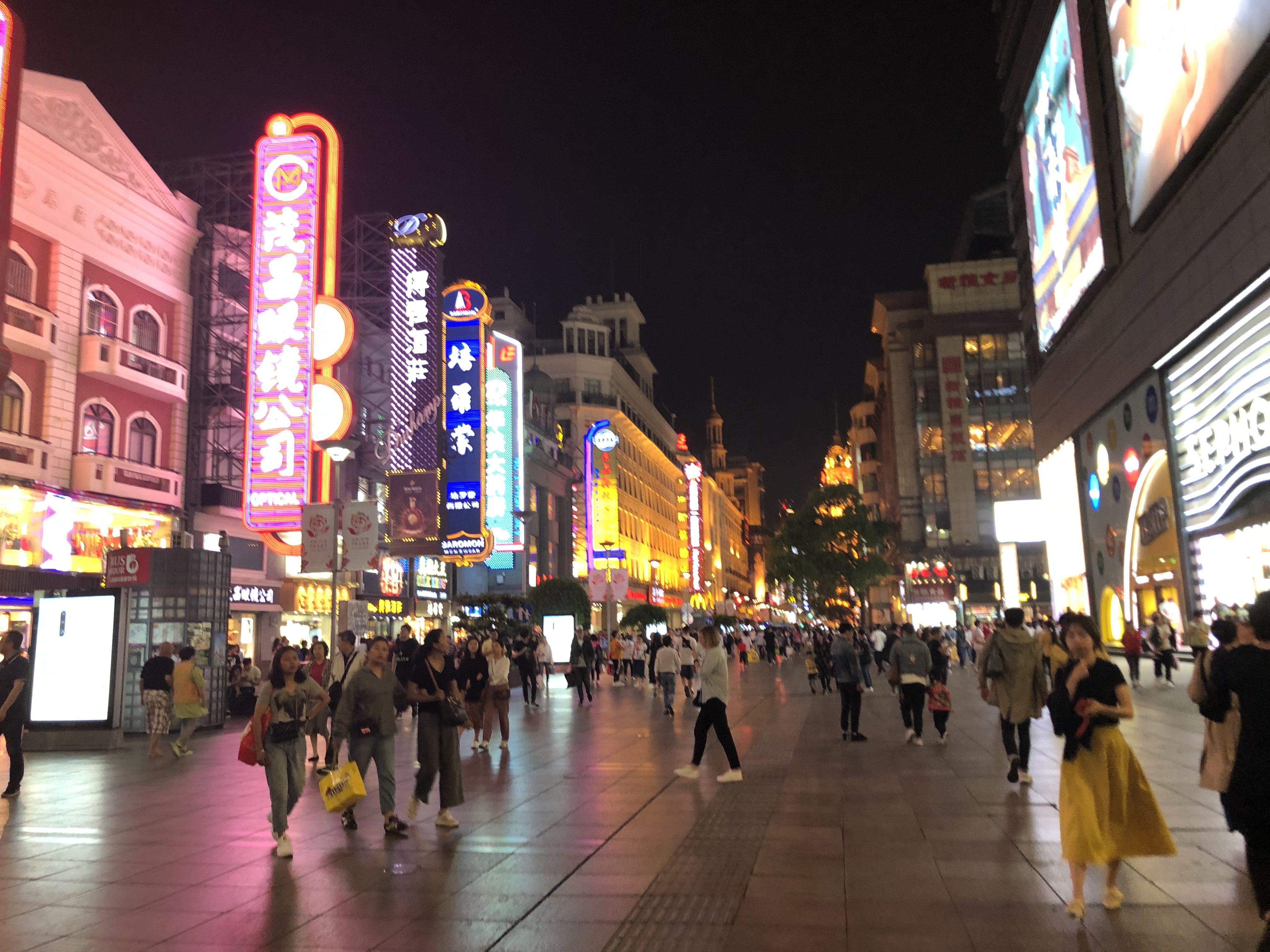 Hey, there’s the Radisson popping up at the end of the street, below: 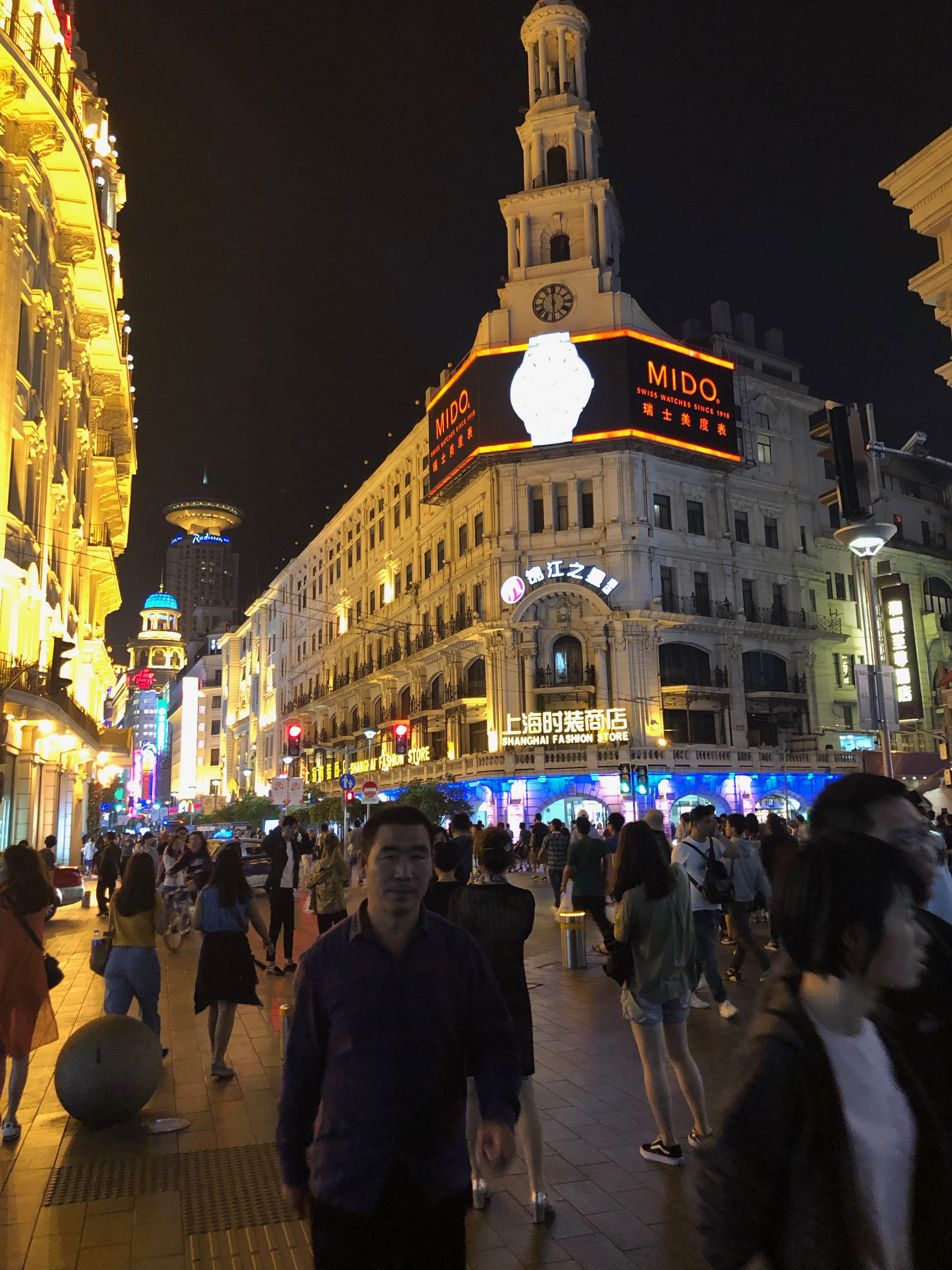 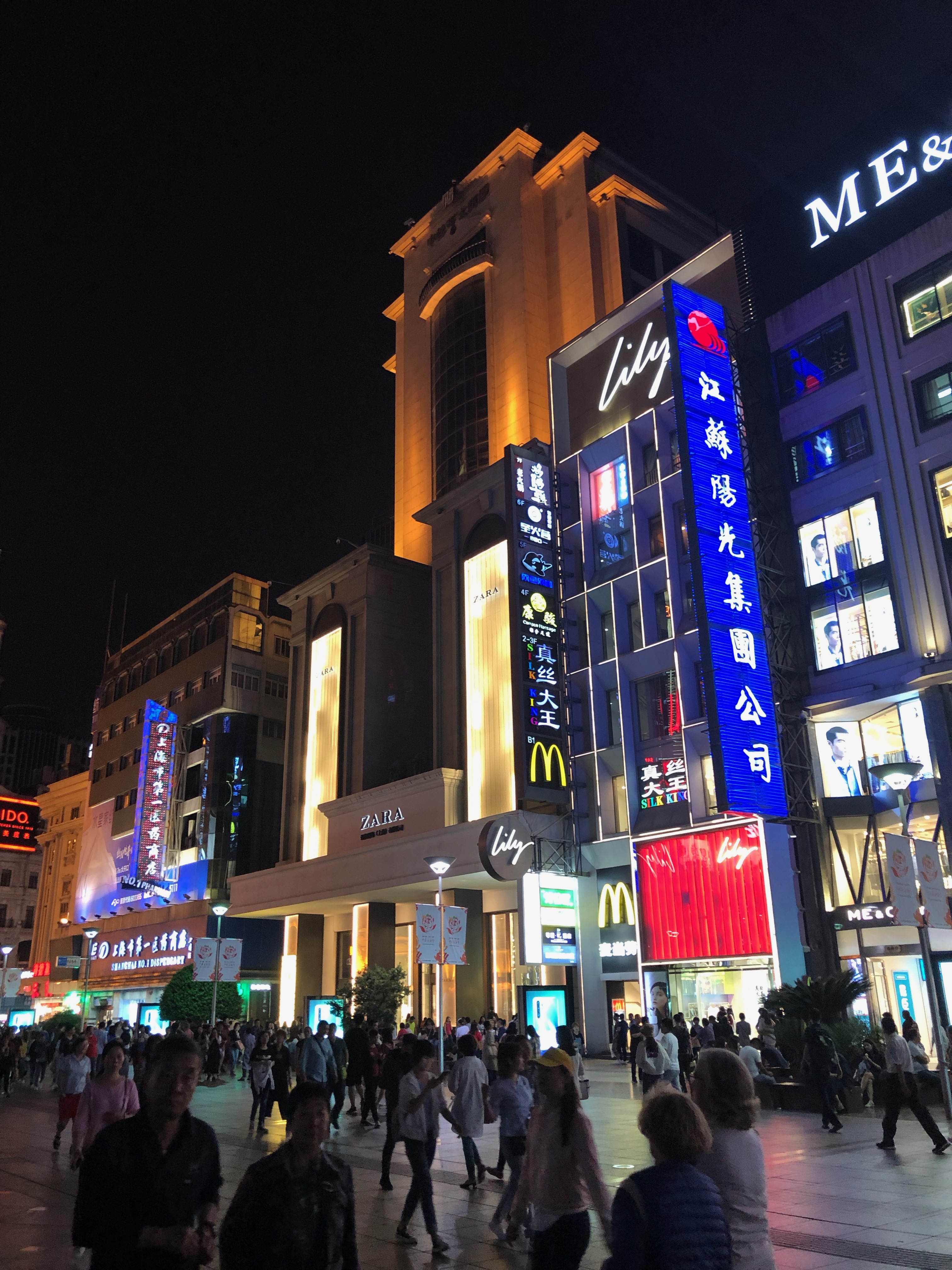 Looking on down past Zara: 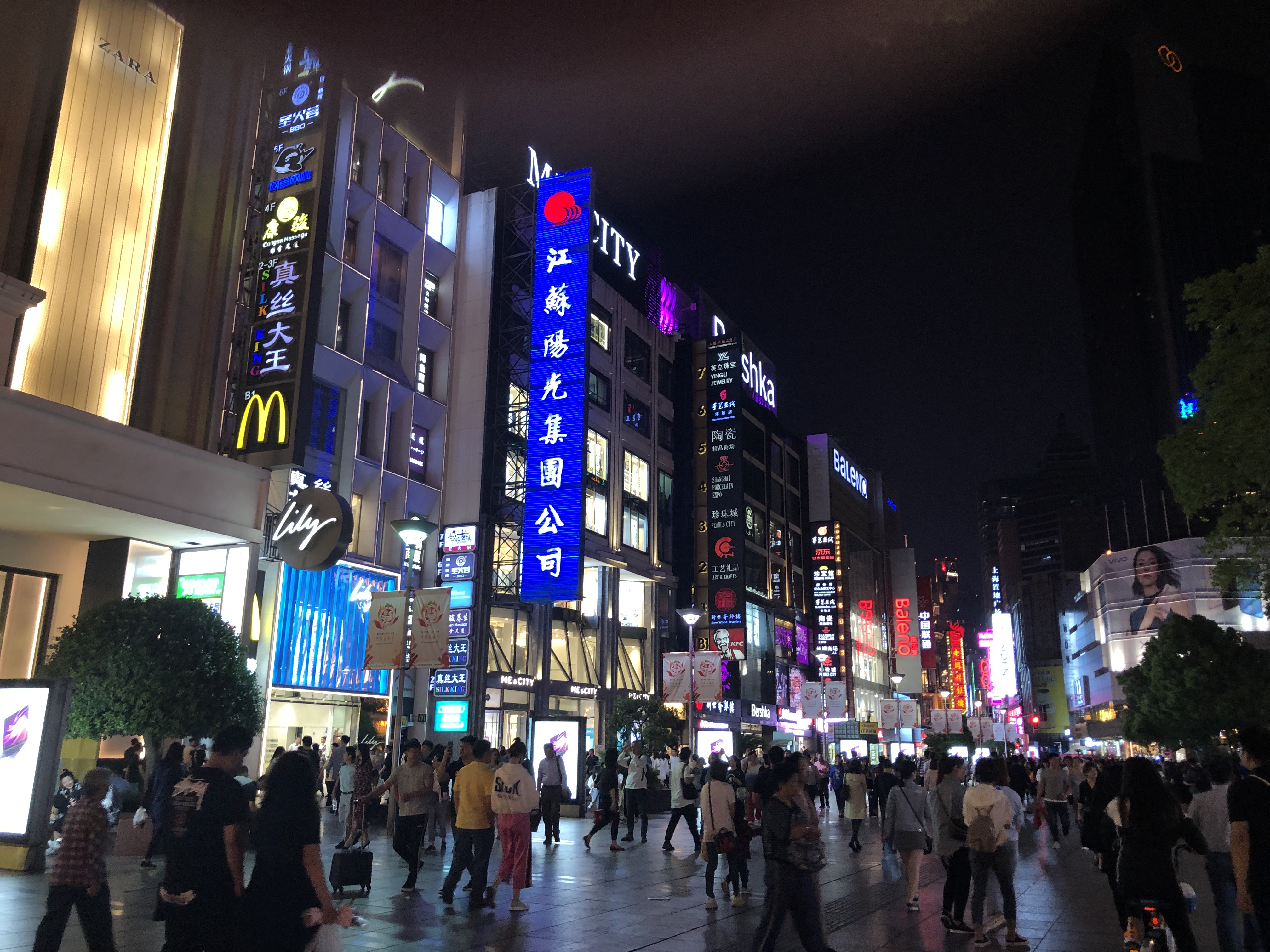 You get the idea.

The next morning I walked about 3 miles up Middle Xizang Road and 3 miles back. 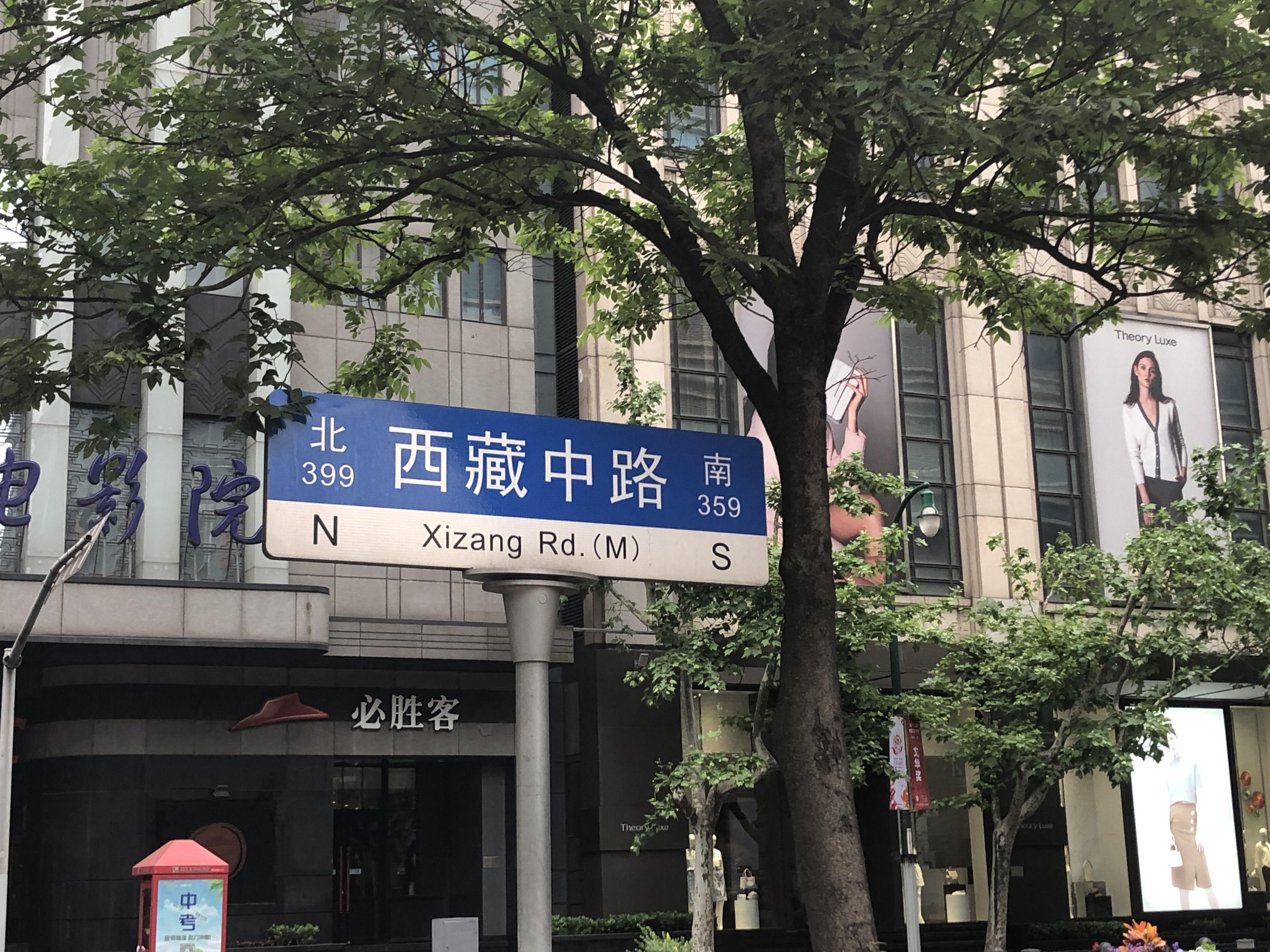 I checked out a side street or two: 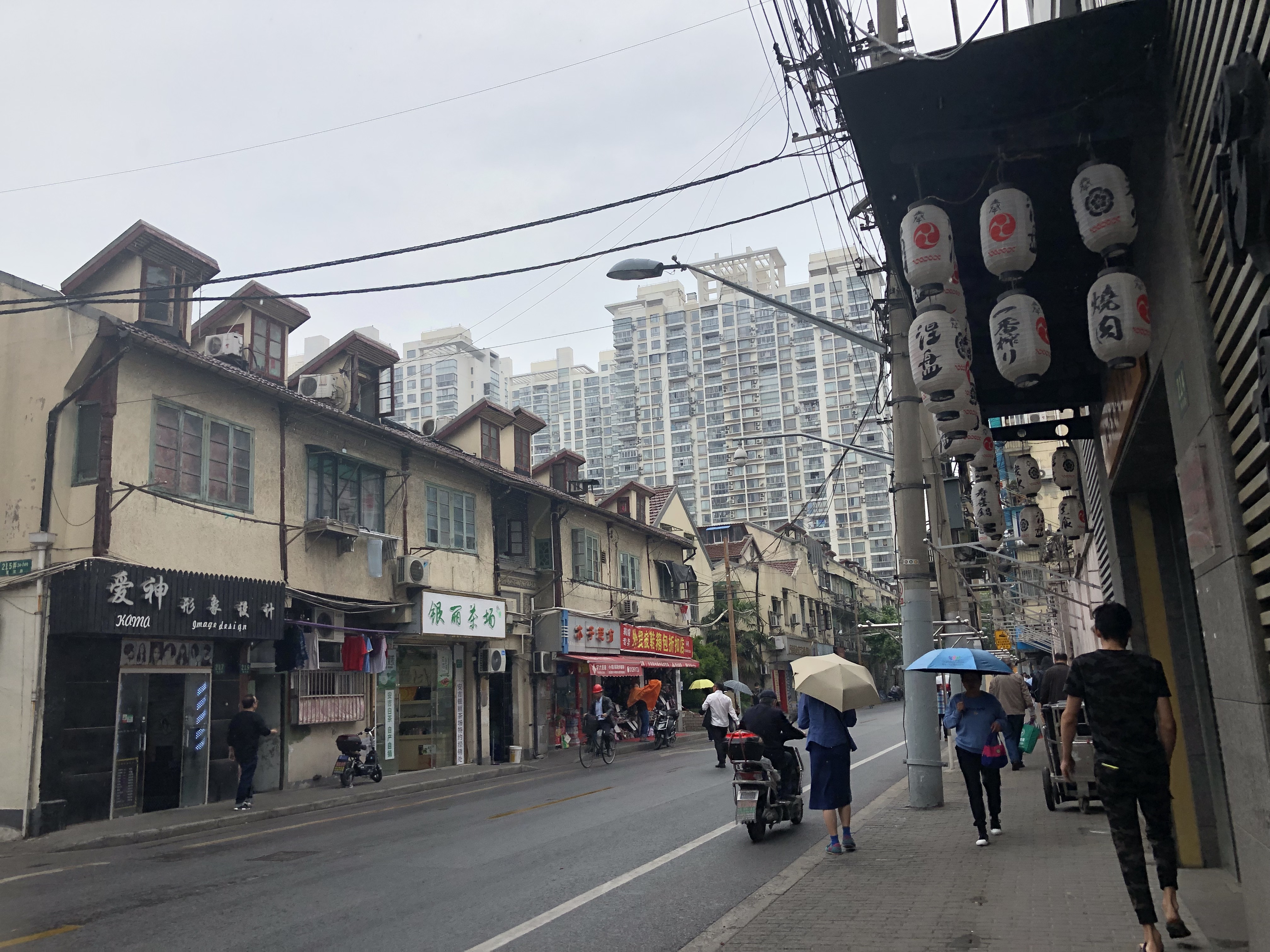 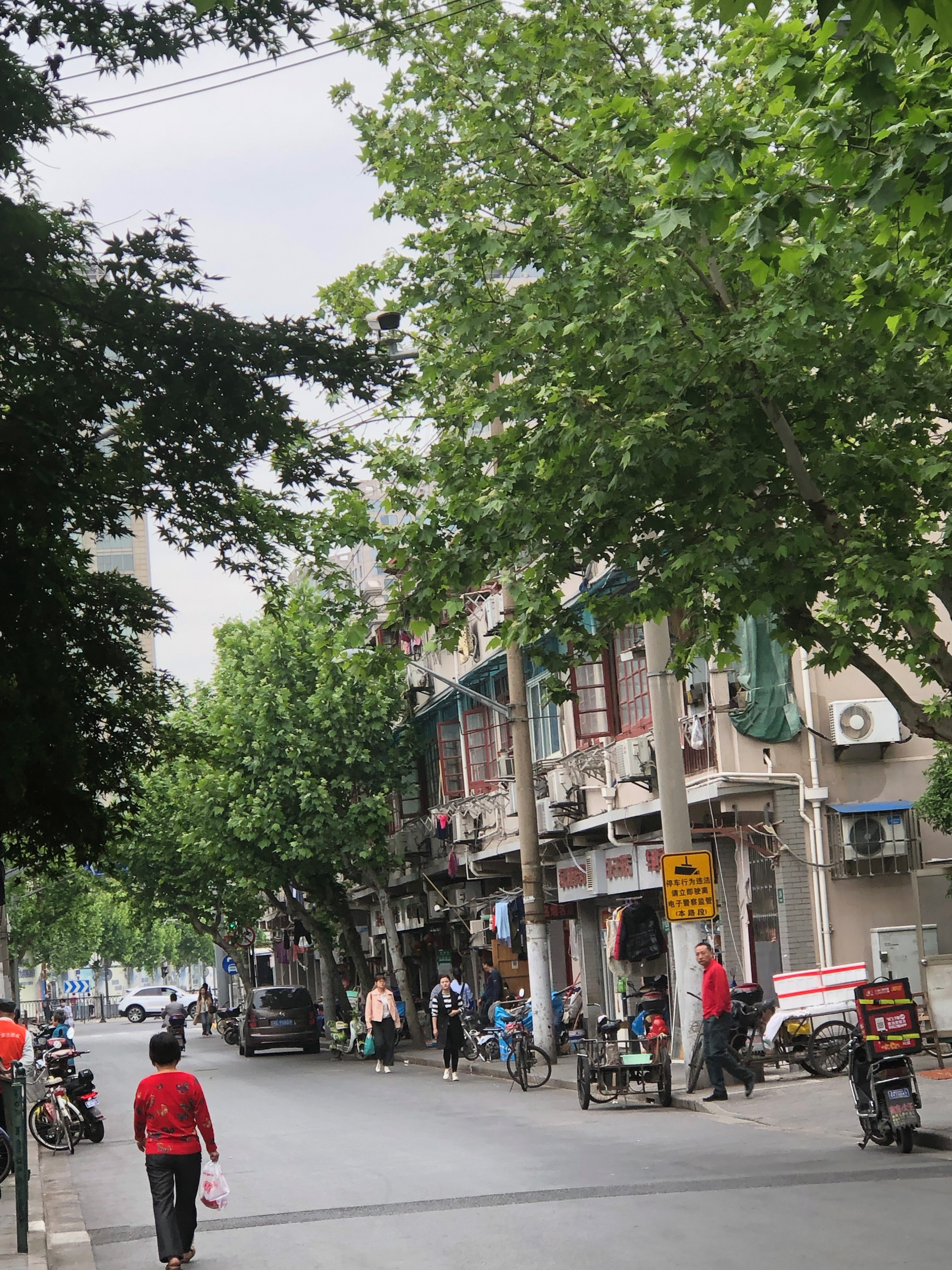 About all I can say about the next shot is, “The blue plastic is a good idea.” 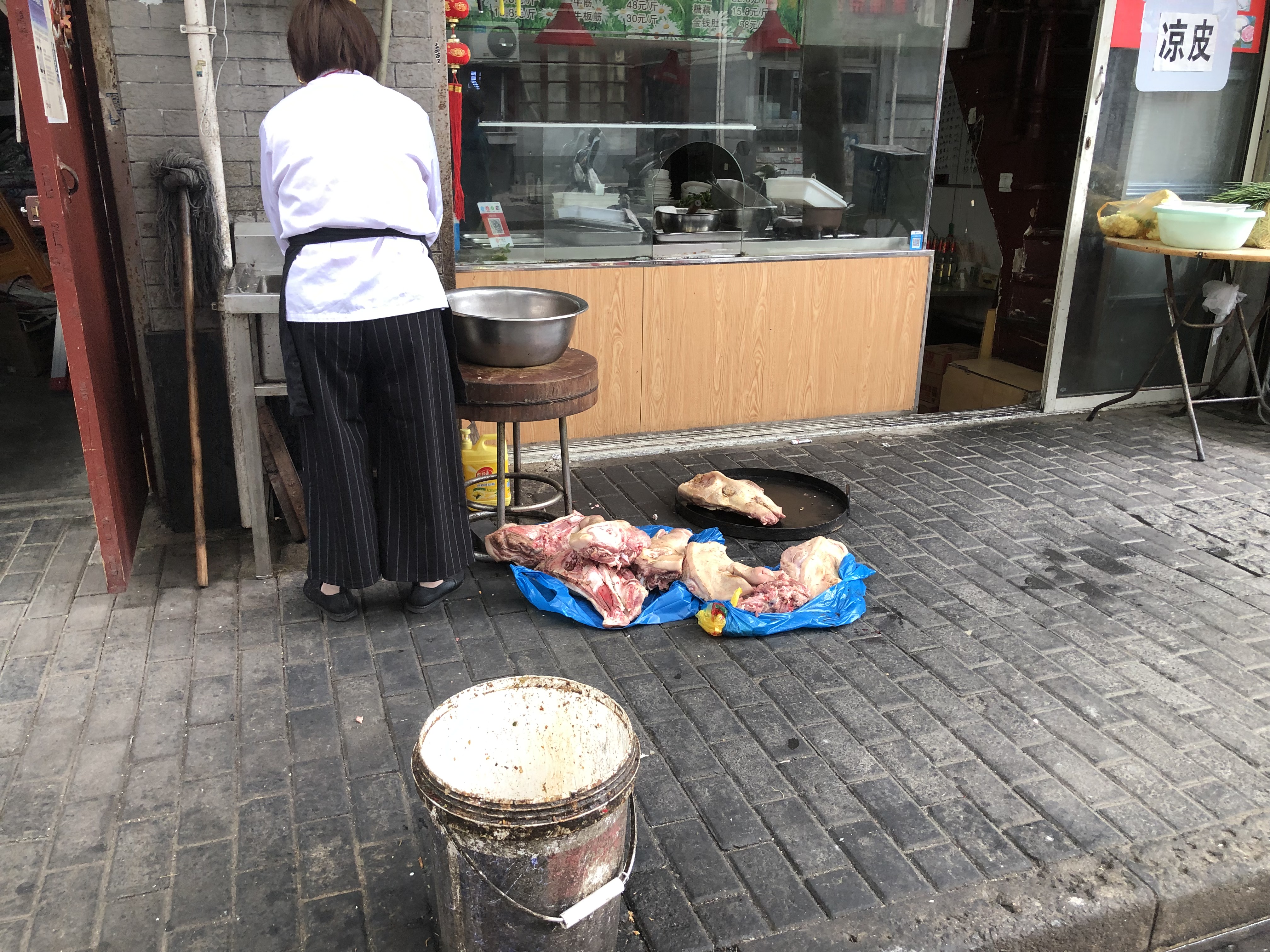 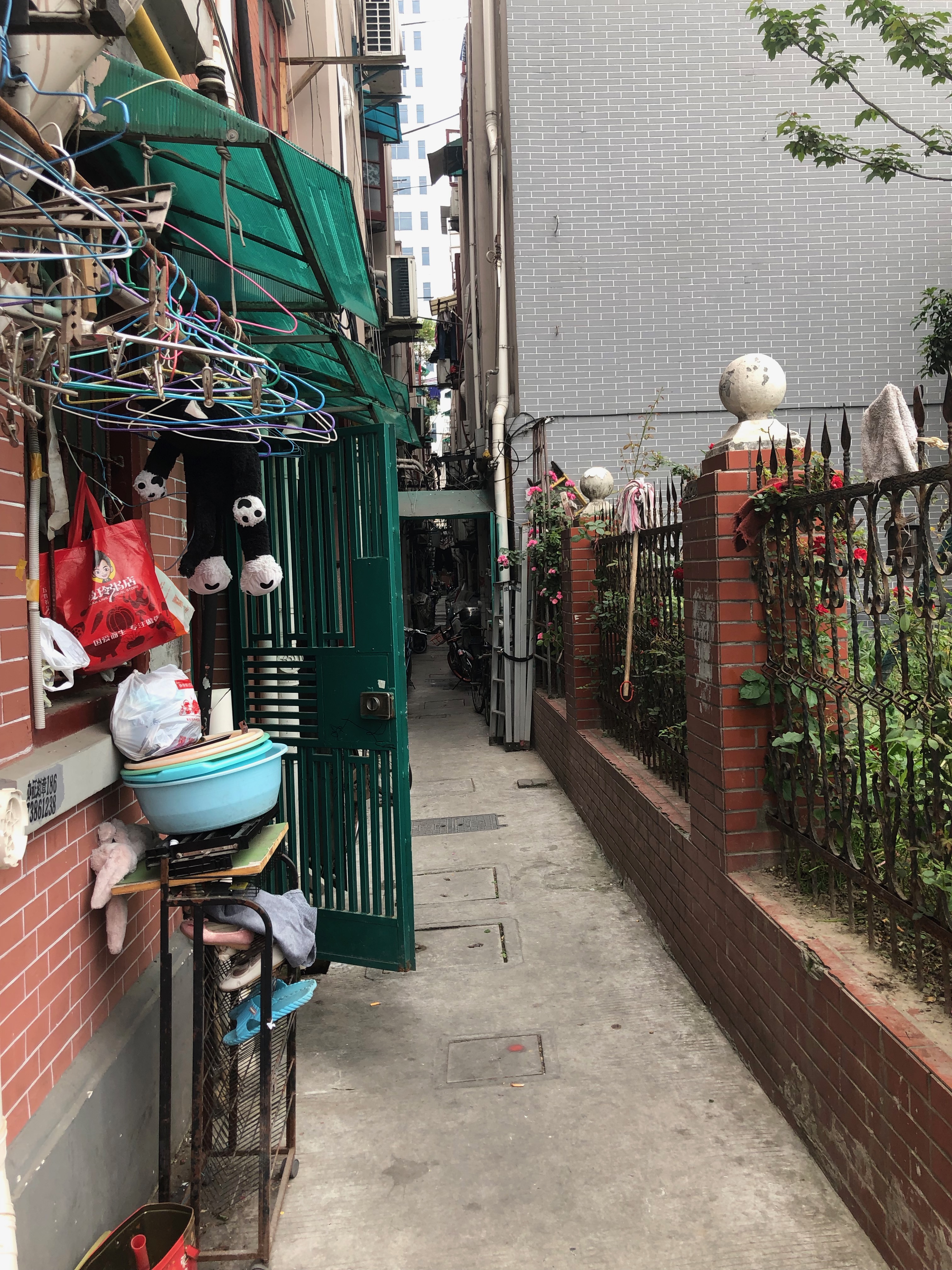 The next day I got on a Big Bus tour and saw … more buildings. Some from the 19th-century British colonial period. Most from the last 20 years. The accompanying tour sound track mentioned several times that Shanghai had once been a small fishing village. I’m sure it was! And, once upon a time, Manhattan had farms. But that was then ….

I got off the bus at some point and just started walking around again. And I came across Chinatown. Honest-to-God Chinatown! It is more properly called Old Street. 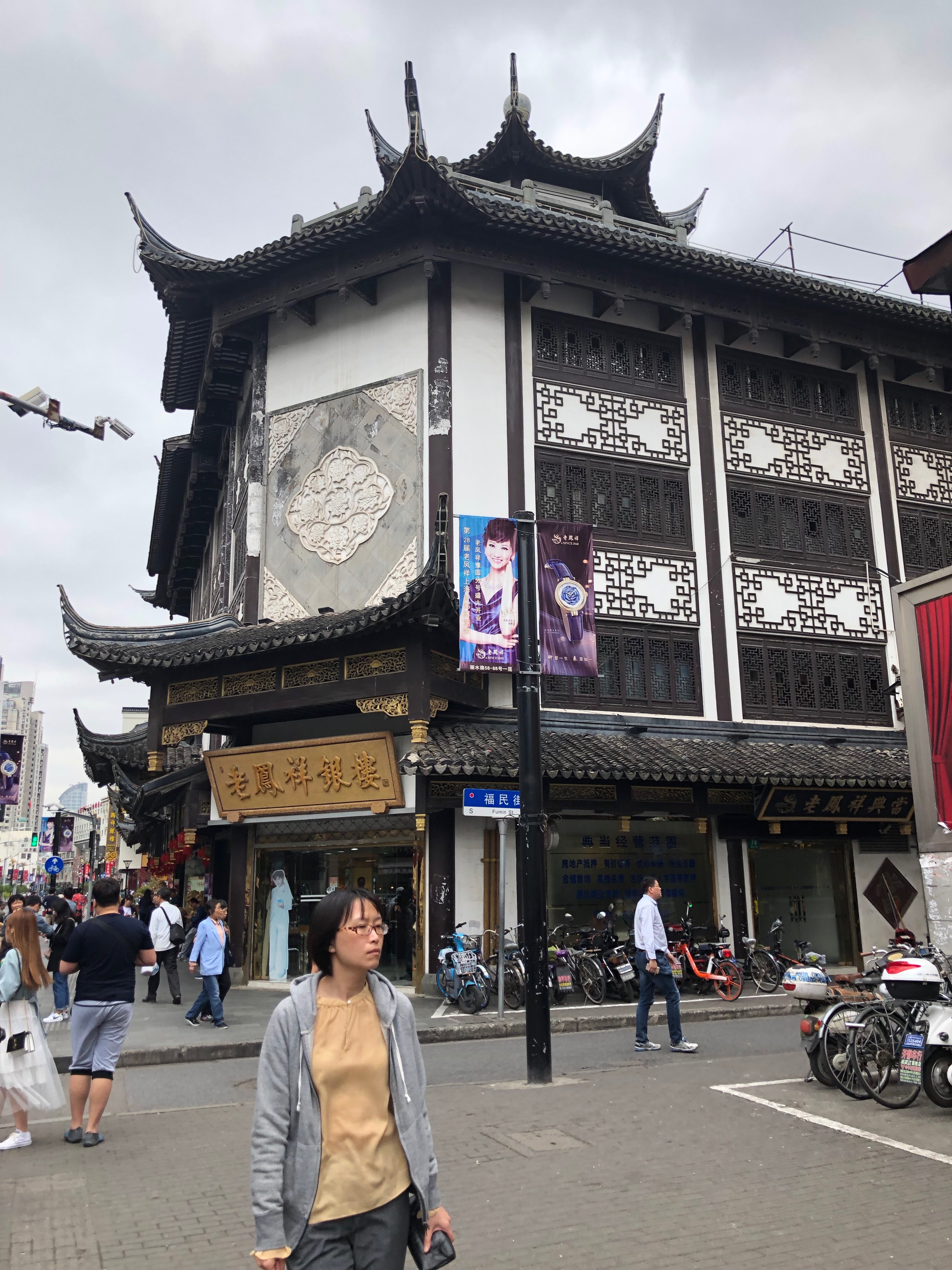 Restaurants and shops with the good stuff and the tchotchkes all mixed in together. 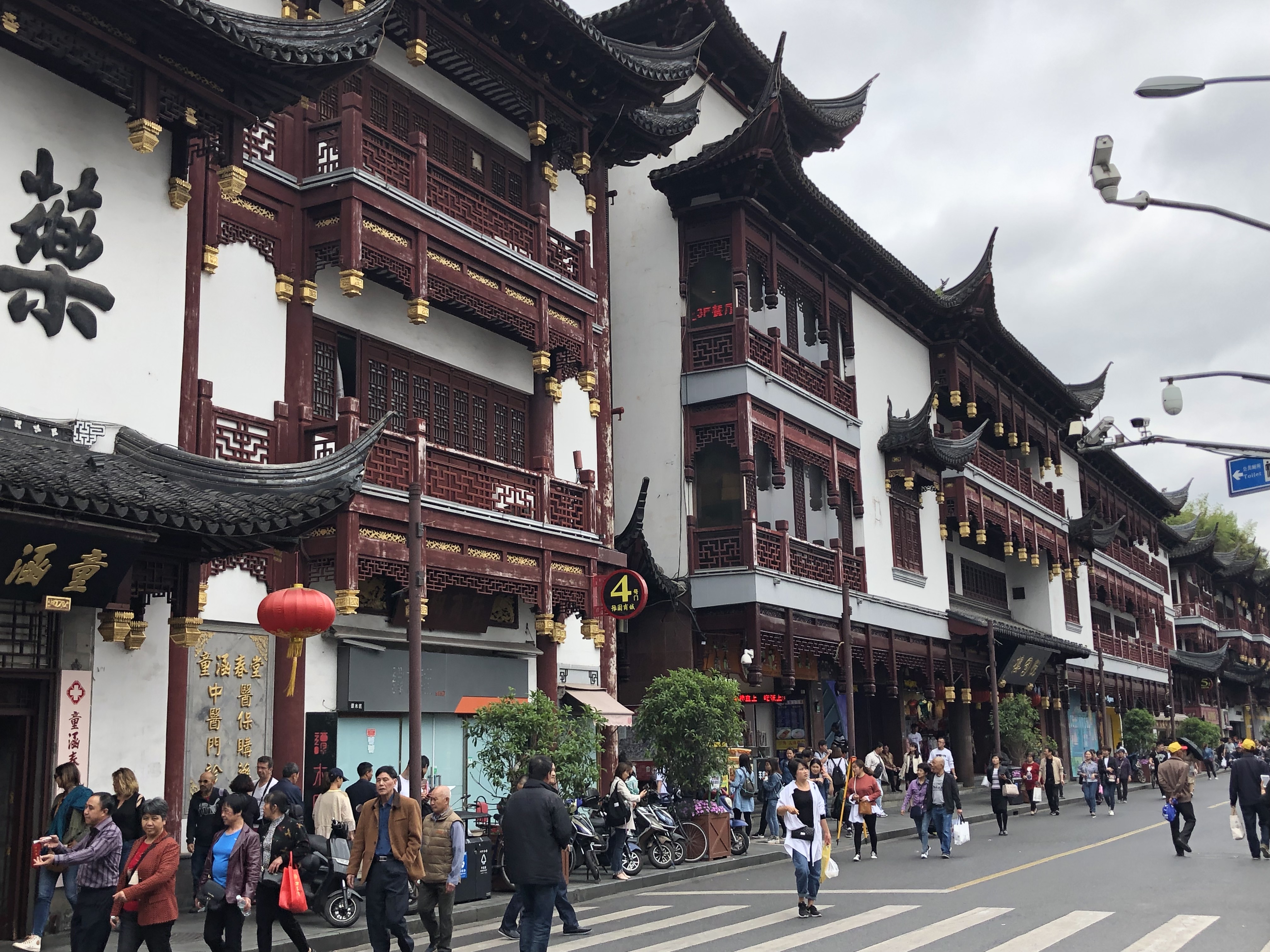 No matter which way you look, the city looms. This way: 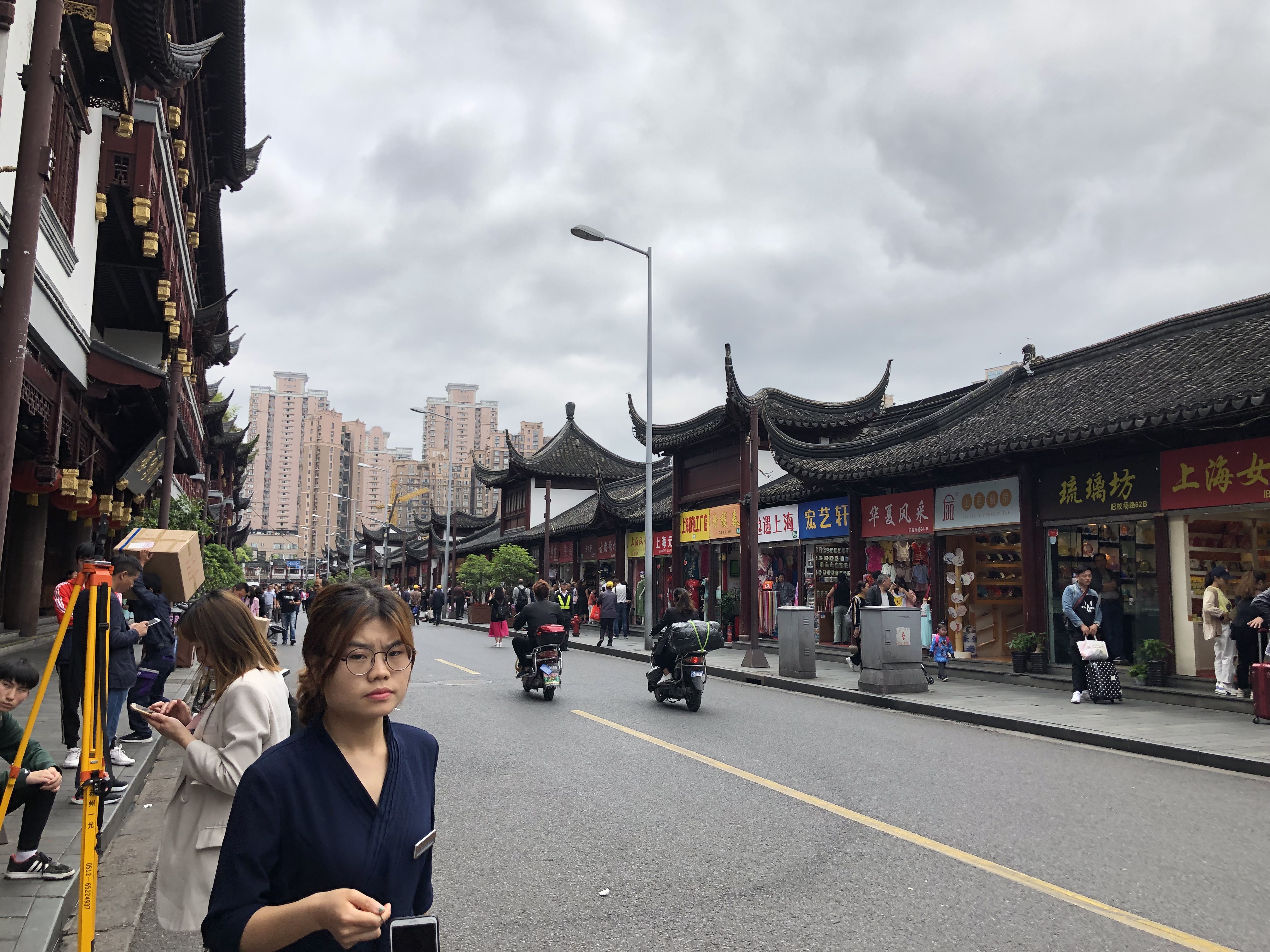 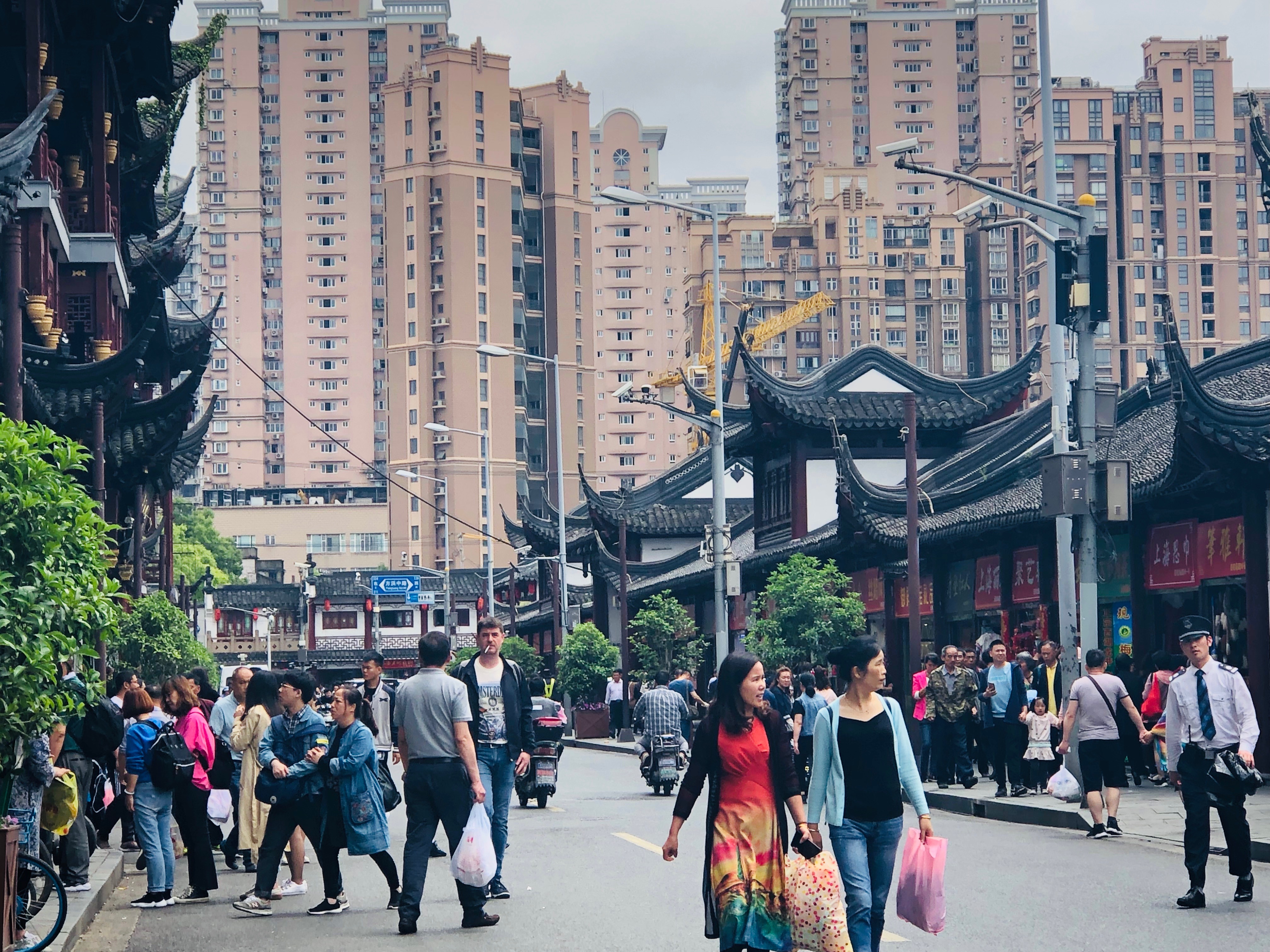 Great fun to stroll around and fend off all the tempting offers of, “Lady, you want a Rolex?”

I suppose the references to Shanghai’s fishing village days hint at the fact that the city doesn’t have a lot of historical monuments or a wealth of traditional Chinese architecture. There are green spaces such as Yu Garden, dating from the 16th century and contiguous to Old Street. Similarly, People’s Square near the Marriott is a nice, big green space.

Otherwise, Shanghai today is the result of a building boom that began in the 1990s.

The first one I saw was: 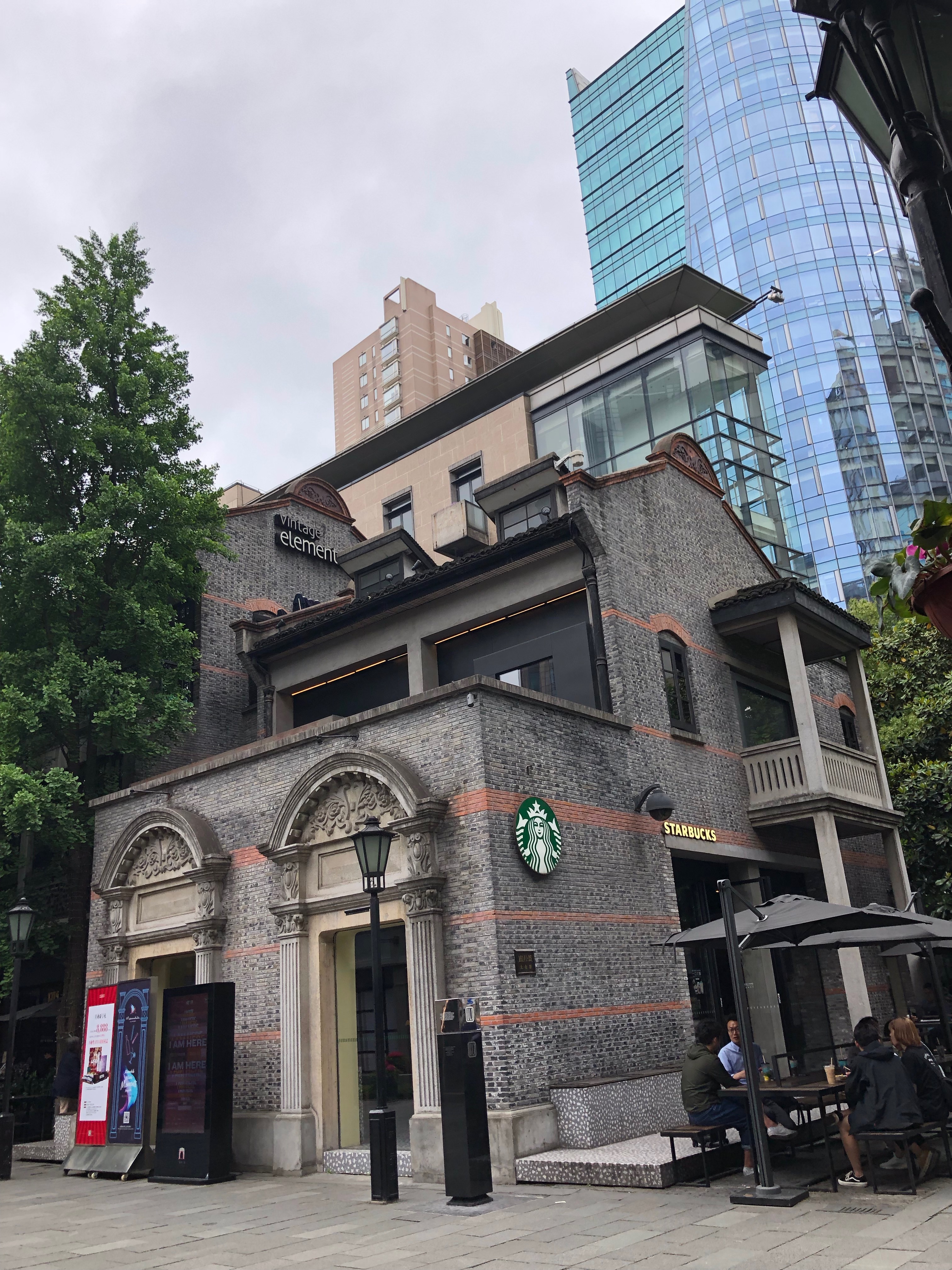 I turned into a really nice pedestrian zone and immediately got a Northern California vibe. 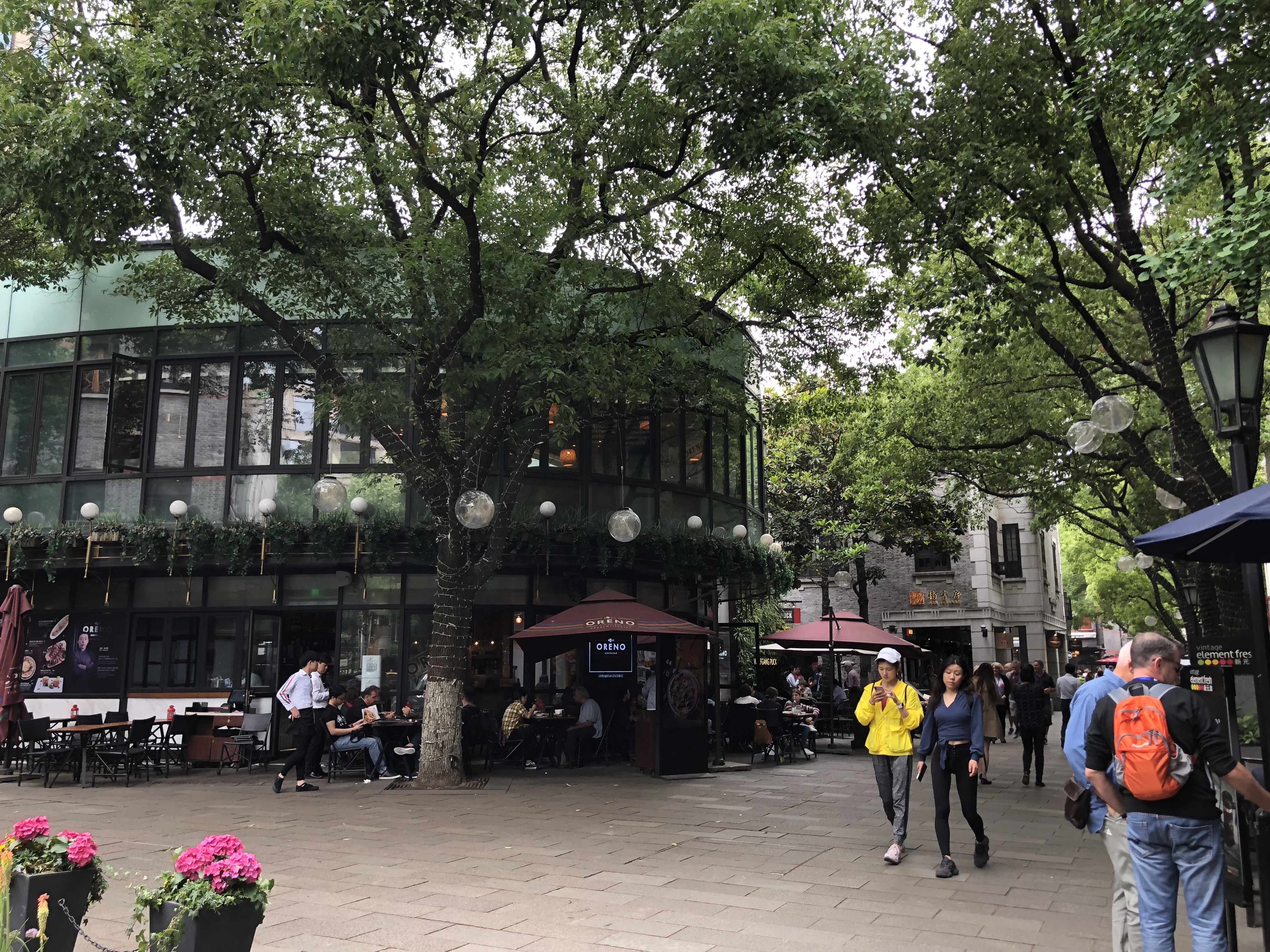 Hardly had that thought crossed my mind than I walked a few more steps and saw: 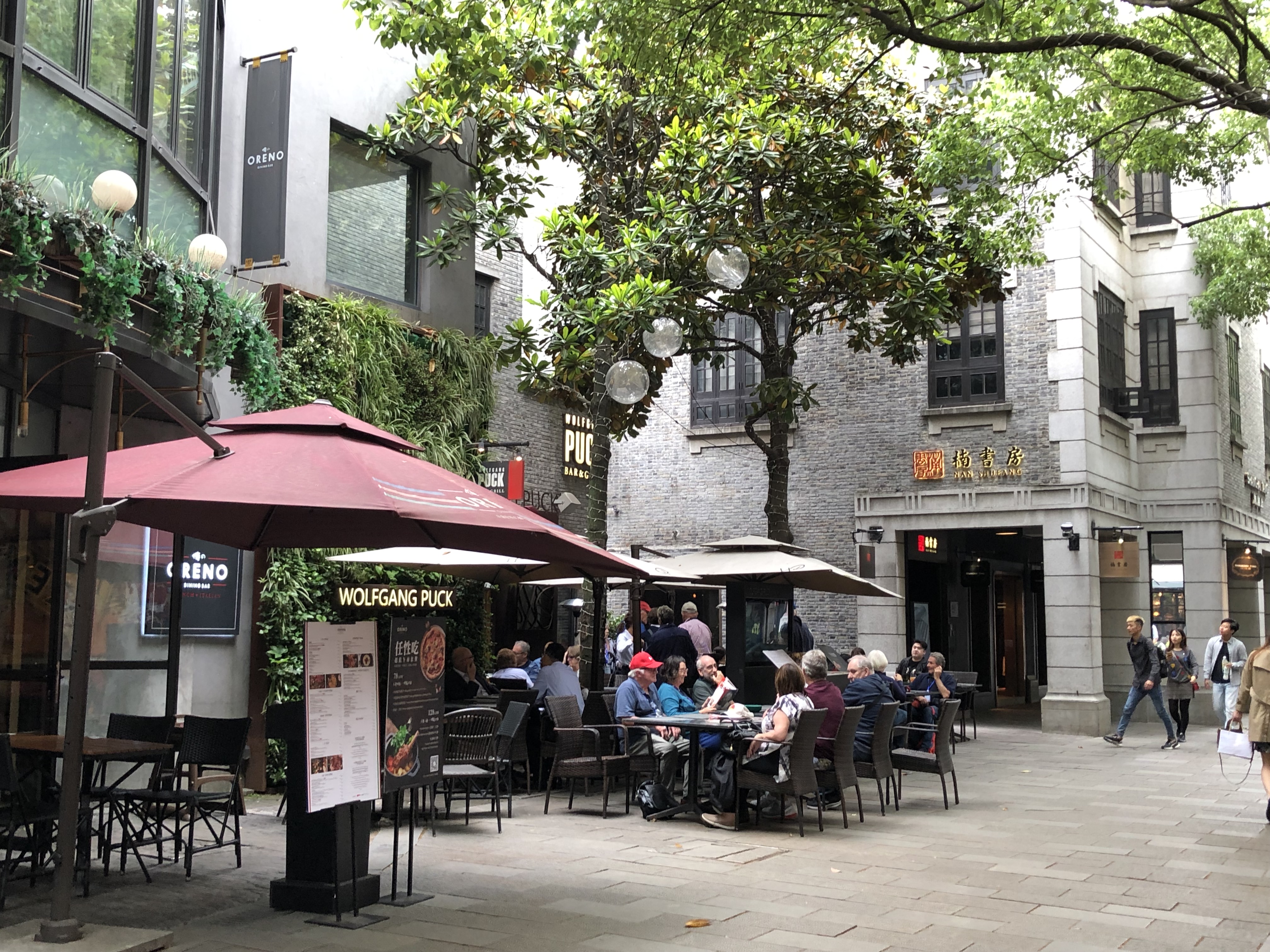 Wolfgang Puck – of course! But, come to think of it, he’s more Southern California. Anyway ….

The main square is charming. 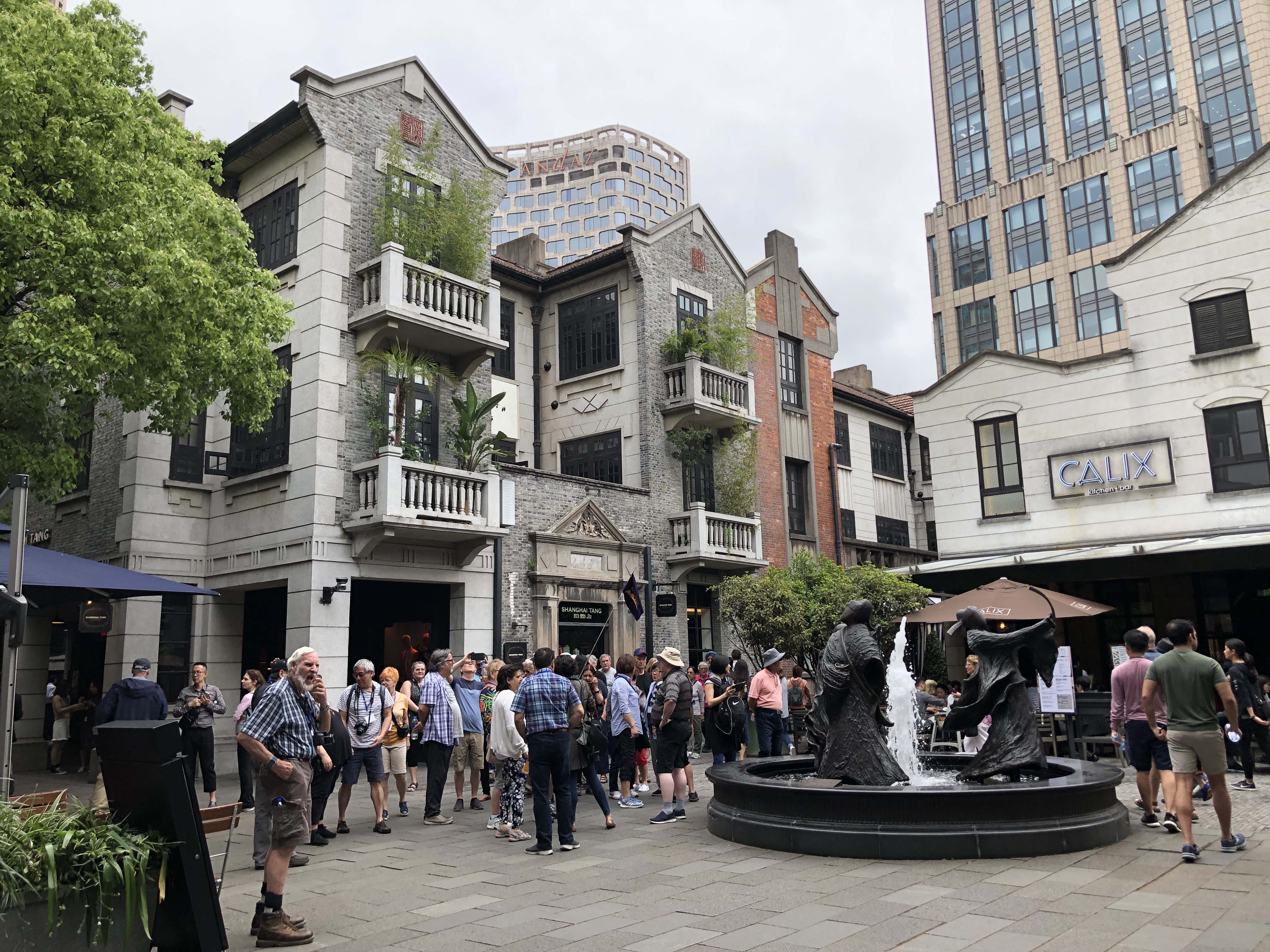 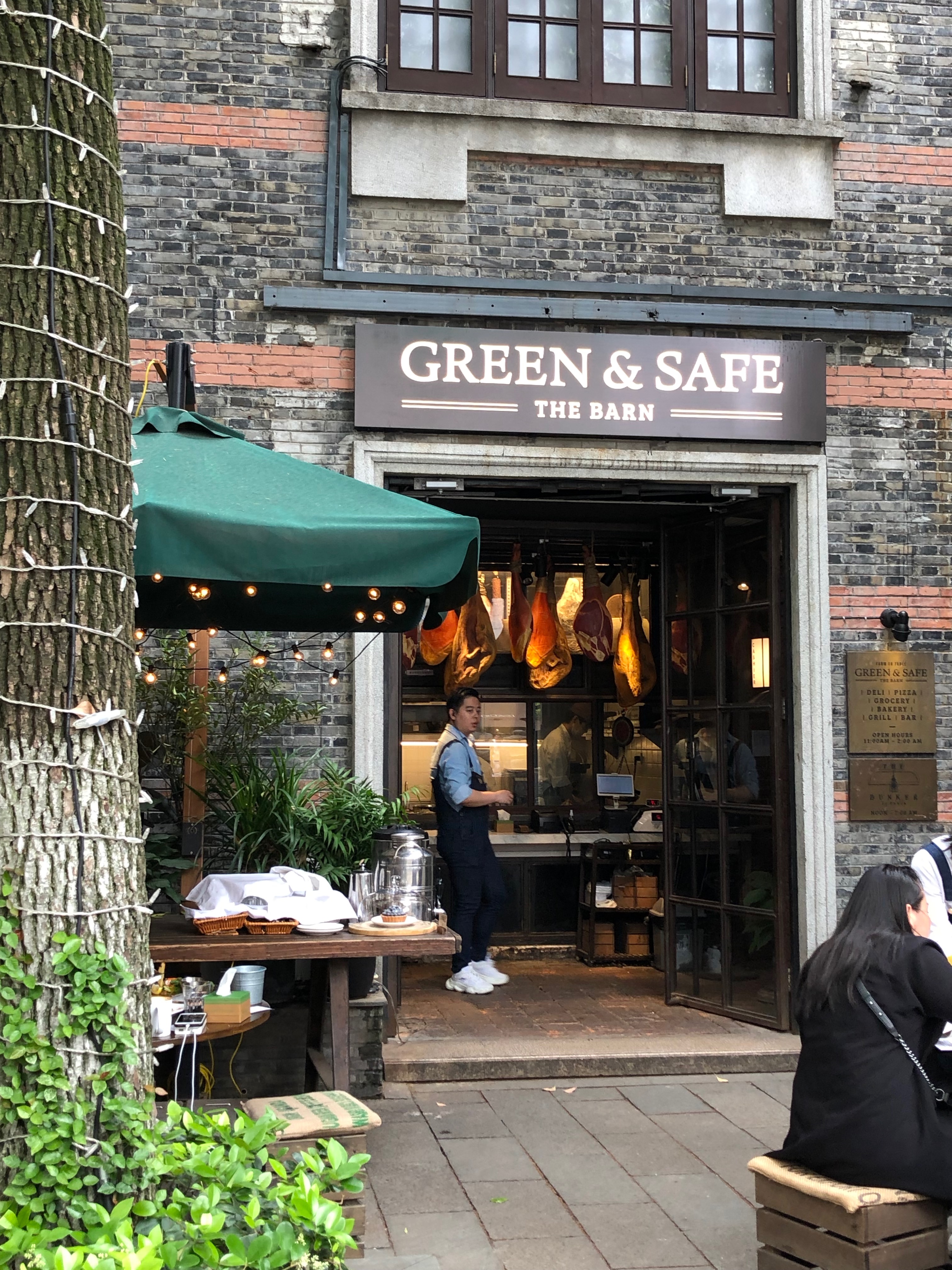 Physically speaking, Shanghai is a sprawling, dense forest of buildings. It’s likely a shopper’s delight, but since I don’t really shop, I can’t say.

These references reminded me of the degree to which movies have become an international visual language. I first wrote about this phenomenon in connection with my experiences in Monte Carlo, Vienna, and Ankor Watt, Cambodia. See Monte Carlo: My Travels and Hollywood.