Today’s post features guest blogger Philip M. Carter, my co-author on the new book Languages in the World. Here he offers a critique of the phrase Speak American.

In a 2015 interview with CNN, former Alaska Governor and Vice Presidential candidate Sara Palin stated that if you are in the United States, you must Speak American. On the Internet and in social media, Palin was immediately lambasted for referring to English as American. Despite her detractors, it must be said that English-speaking monolinguals largely agree with her.

This agreement assumes many forms. It may be small side-eye glances leveled at those not speaking English in public or well-intentioned suggestions by teachers to immigrant parents to ‘practice English at home.’ It may be the large, collective complicity with English monolingual education and the near total erasure of multilingual speakers and their experiences from mainstream American life.

Linguists and anthropologists who study this phenomenon have named it the ‘ideology of English monolingualism,’ a worldview in which the world’s languages can be divided into two categories: English and everything else.

Monolingualism is a fairly recent aberration in the history of human language. The ideology of English monolingualism assumes that knowing English and only English is more prestigious, more valuable, and – above all – more normal than knowing any number of other languages, even when combined with the knowledge of English.

The ideology assumes that English is essential to everything, and anything worth hearing, reading, or knowing is already hearable, readable, and knowable in English. Everything else – the languages and experiences of the rest of the world – barely register as constituting reality.

One of the more pernicious aspects of the ideology is its penchant for distorting reality about language.

To return to Palin’s exhortation to Speak American, two ironies are evident:

First, there are such things as American languages, namely, the indigenous ones, which, unlike English, are endangered. Linguists have identified Oklahoma, the destination for Native Americans forcibly removed from their homelands under Andrew Jackson’s 1830 Indian Removal Act, as one of the world’s so-called language hotspots, sites where multiple languages are at risk of extinction; and

Second, American languages are disappearing not because the speakers decide to stop speaking them on a whim, but because the policies, both historical and current, which were specifically designed to eliminate them in favor of English, worked as designed.

Of course, Palin was not even obliquely referencing speakers of Apache, Cherokee, Choctaw, Cree, Hopi, Miccosukee, Navajo, Ojibwe, Paiute, Yupik or any other Native American languages when she admonished us all to ‘speak American.’

The ideology of English monolingualism bestows is a free pass to claim ignorance of all the languages, speakers, and experiences around us with total impunity.

Palin’s remarks came less than one week after Donald Trump excoriated Jeb Bush for speaking Spanish on the campaign trail. Trump’s remarks that Bush should ‘set an example by speaking English while in the United States’ take the ideology of English monolingualism to its outer limits by implying that the 50 million Spanish speakers in this country either do not exist or should not communicate in any language other than English.

Spanish has a longer history in the United States than English does, but what is noteworthy about Trump’s remarks is not the historical inaccuracy, but rather the rhetorical force driving the idea that elected officials can tell their constituents what language (English) to speak and with whom (everyone).

Prior to the advent of the modern nation-state system, governing bodies and the ruling classes did not care what languages their subjects spoke. For example, the Romanovs who ruled Russia had no in interest in Russian. They spoke French.

When, in the 18th century, languages became symbols of entities called states, the United States had the wisdom to not declare English as an official language. Such a declaration would have been seen as a curtailment of liberty.

Palin’s and Trump’s beliefs about language work in tandem with beliefs about race and ethnicity, socioeconomic class, region, and immigration status, which as a whole function to promote inequality.

As the United States becomes more rather than less multilingual, the new frontier for civil rights is likely to be language rights.

Let us anchor our national identity in the multilingual realities of our language scene rather than the ideology of English monolingualism.

Let us follow Thomas Jefferson in his idea of what it means to speak American: it’s a choice best left to speakers and their communities.

Phillip M. Carter is the co-author of Languages in the World. How History, Culture, and Politics Shape Language with Julie Tetel Andresen (Wiley-Blackwell, January, 2016). He teaches at Florida International University in Miami.

See also: All My Languages in the World Blogs

See also: Spanish Use is steady or dropping in US 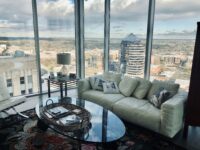