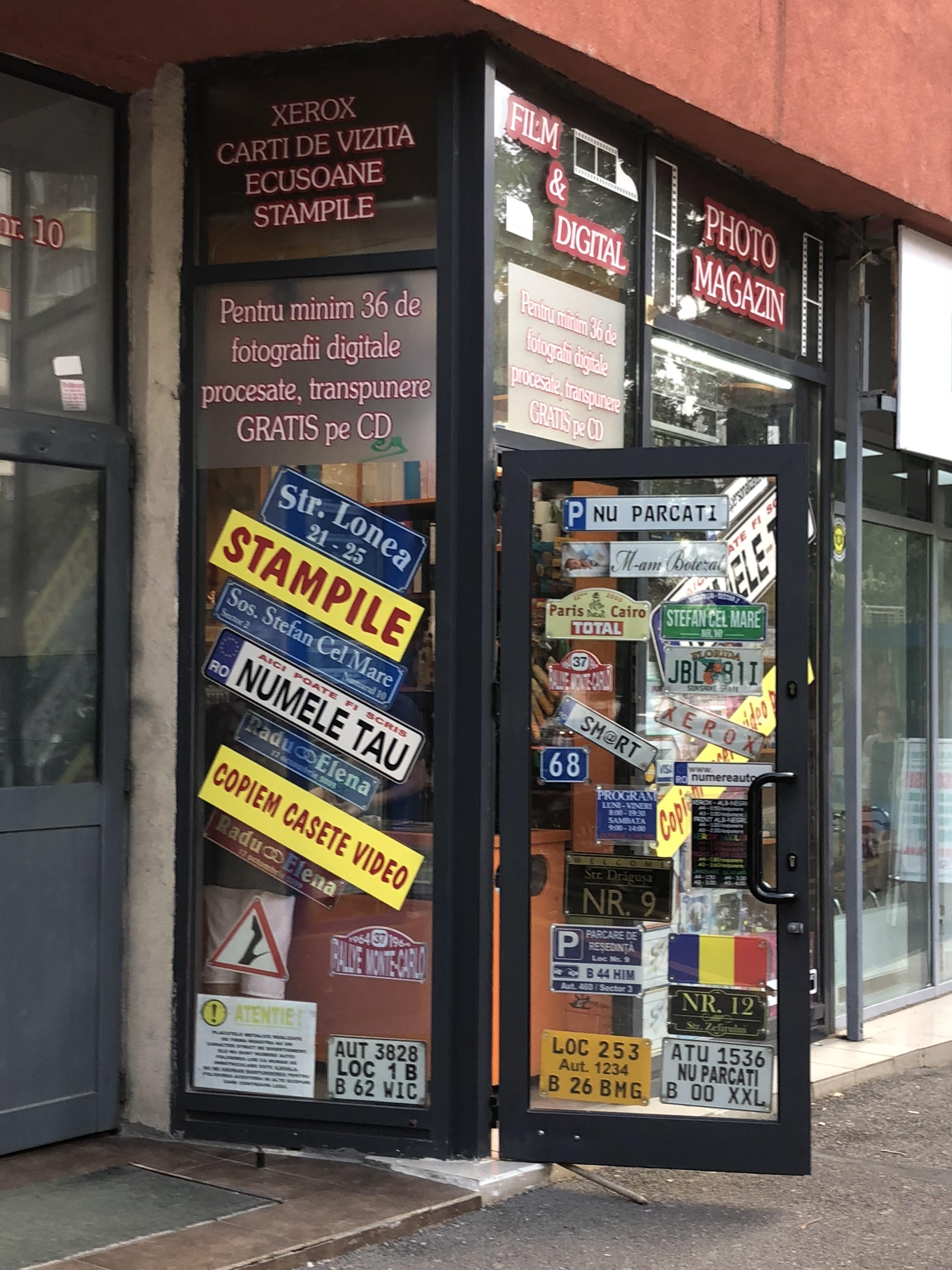 It’s always good to know the language of the country you are traveling through or living in because it’s helpful to know what’s going on in the public sphere. Street signs tell a good story.

Here are a few examples in Bucharest I’ve encountered in the past couple of days:

The #pebune? caught my attention. Pe bune is the Romanian equivalent of Really? or maybe even Are you kidding me? 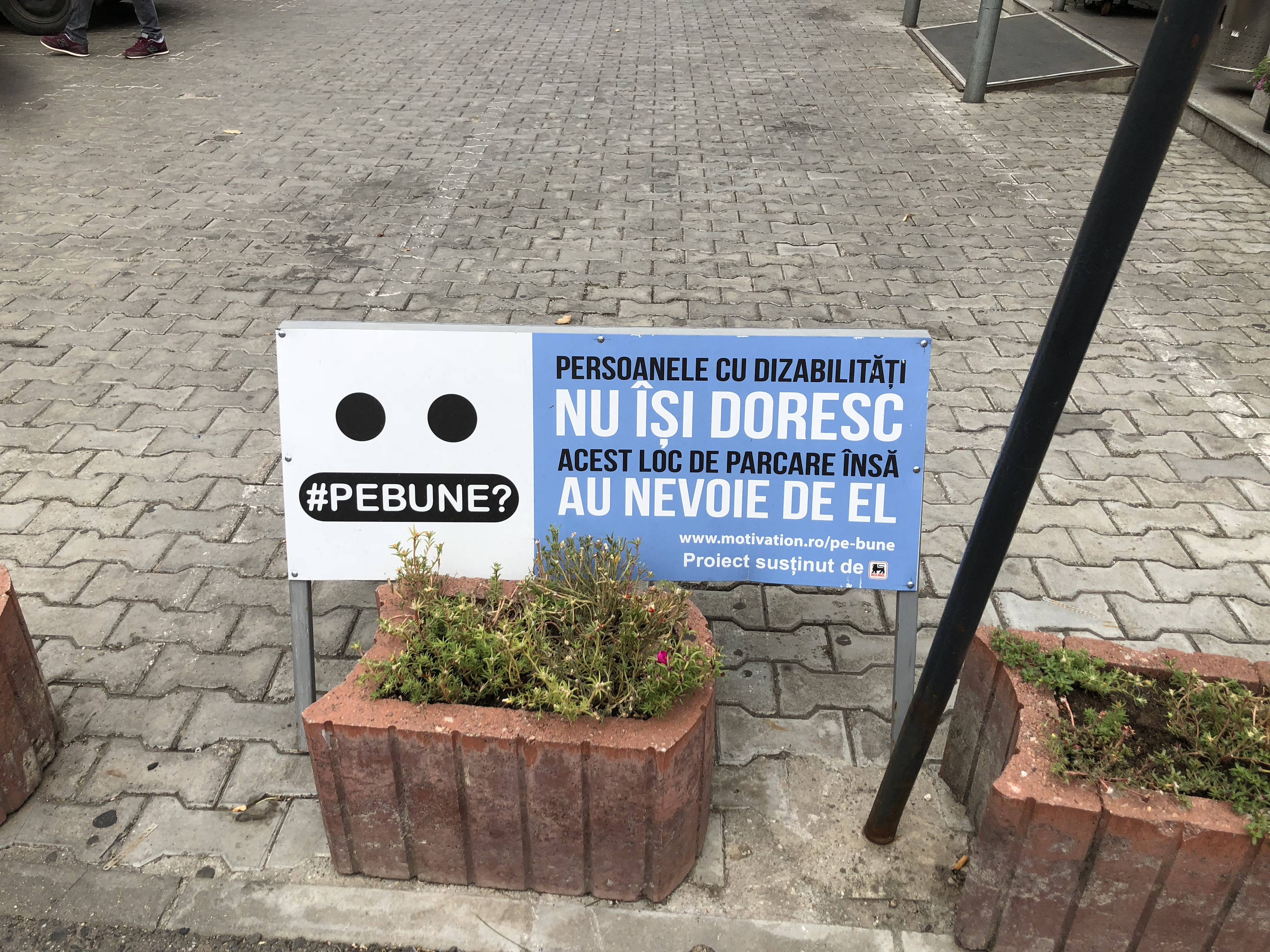 The #pebune? bit made me think of the American DON’T EVEN THINK OF PARKING HERE sign, because the Romanian sign: i) has to do with parking, and ii) is non-traditional. However, it isn’t the arch I-can-read-your-mind American version. Rather, it’s an appeal to the heart.

It reads:  People with disabilities don’t want this parking space but yet they need it.

The idea is: You, the able-bodied person, wouldn’t want to need it, either. Be considerate.

This is the sign in the bathroom of my favorite restaurant in Bucharest, Torna Fratre. The words in red letters say “Don’t Throw in the W.C.” … 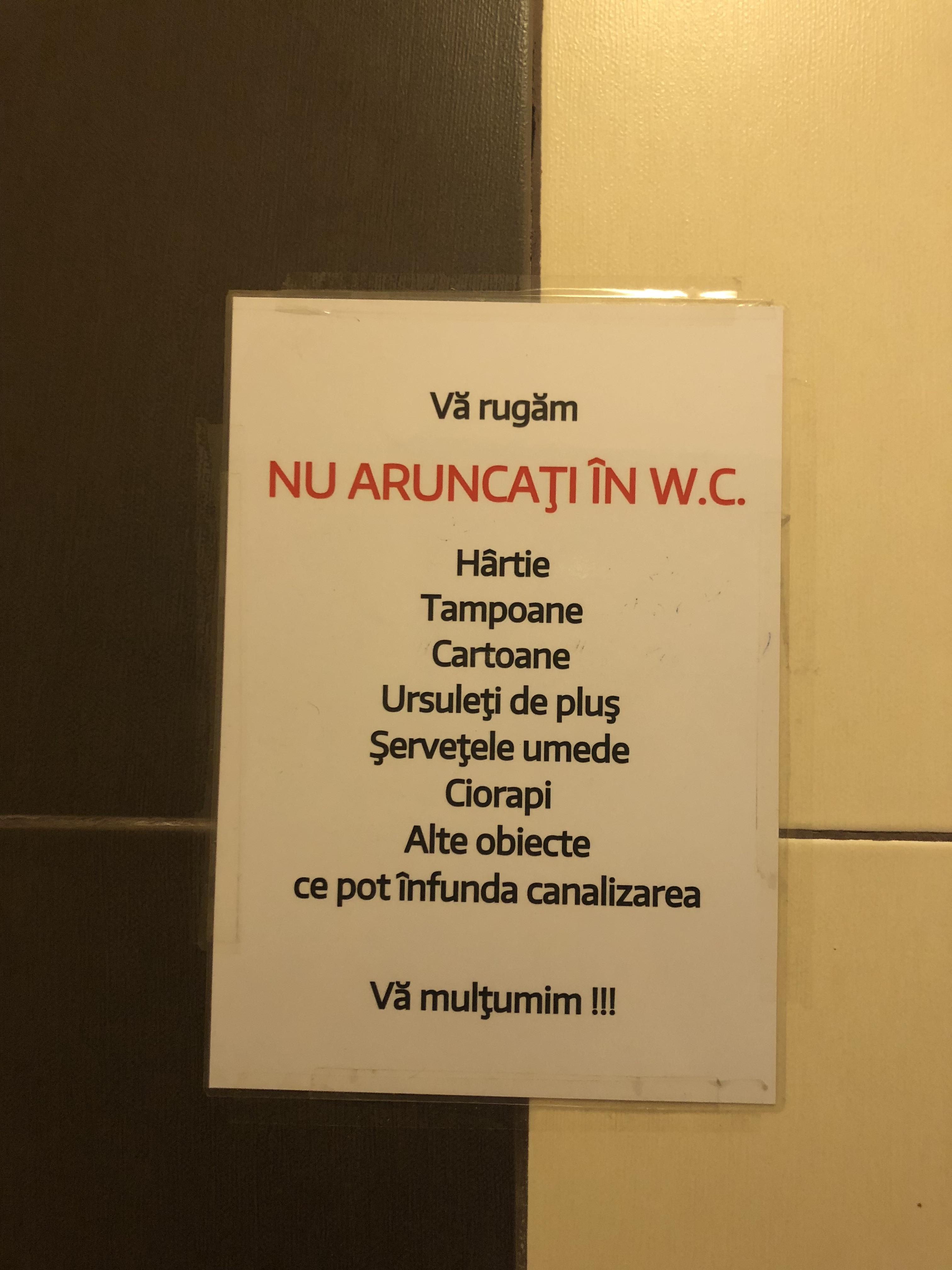 Other objects that can stop up the plumbing.

Now, let’s review …. Teddy bears? Okay, I can imagine that the stuffed animal of some kid some time – and likely more than one, hence the inclusion of this item on the list – found its way into the toilet bowl and got flushed. But stockings? I suppose they’re already half-way off when a woman goes to the bathroom (pantyhose, anyway), but then you have to take them all the way off and deliberately flush them. Seems weird.

But then again there’s the tag in some clothing that reads DO NOT IRON WHILE WEARING and, sure enough, I’ve ironed a skirt or two when I’ve had it on. So people do weird, irrational stuff.

You’re walking down the street and you see this sign: 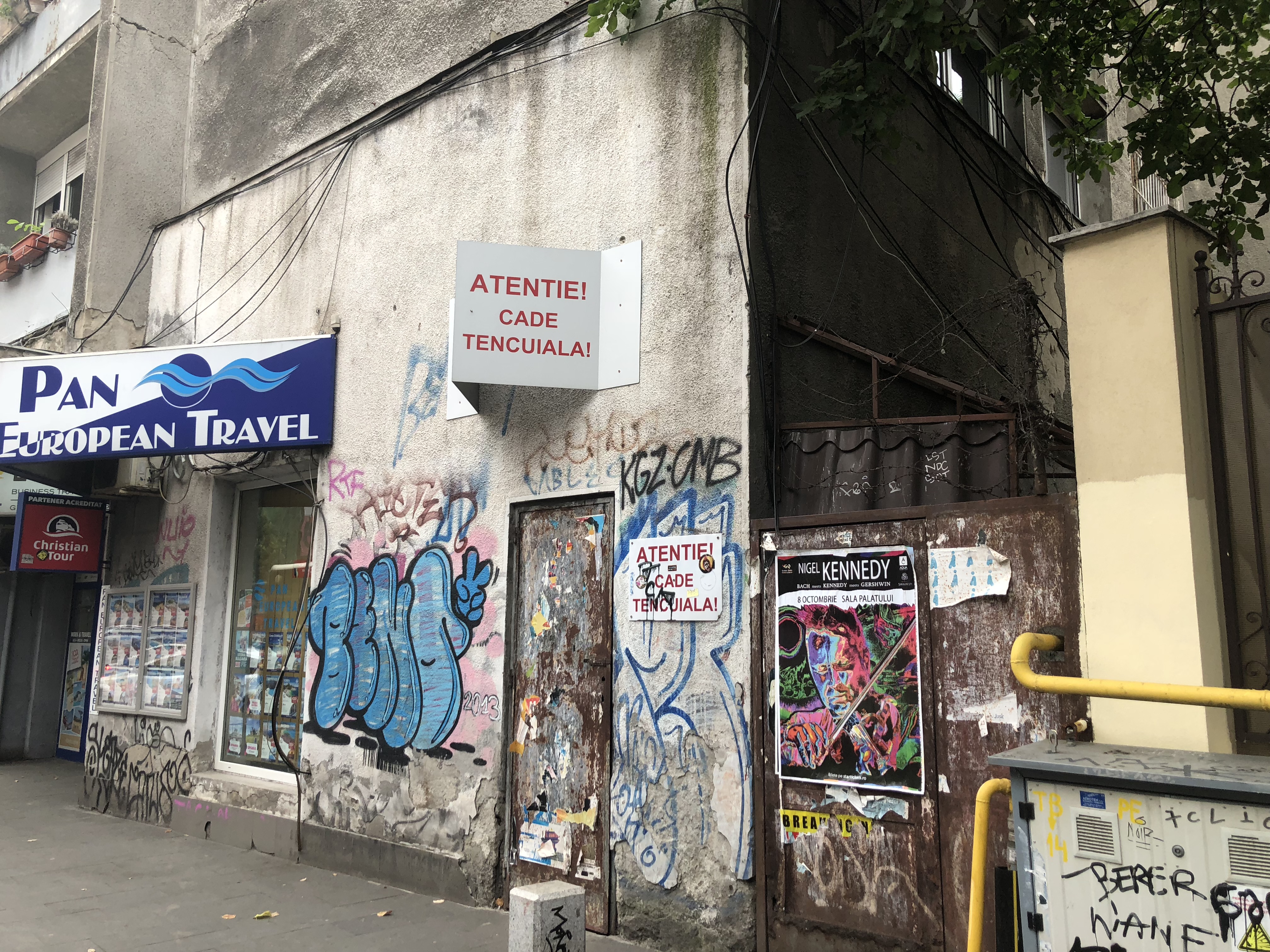 Cade is ‘fall’ and Tencuiala is ‘mortar.’ Heads up!

Bucharest is hardly alone in presenting hazards from above.

Since 1979 New York City has required regular façade inspections to prevent bricks from falling on unsuspecting pedestrians. Nevertheless just last month in the NYC neighborhood of Chelsea a pile of bricks fell off a building. 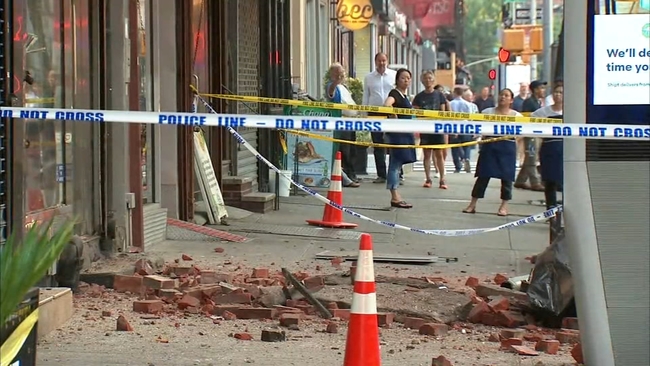 Thankfully, no one was hurt

This list of things falling off buildings in New York City is truly astonishing and includes flying plywood, window-unit air conditioners, the occasional bowling ball and an acrobat. Read about it here.

So, yeah, in cities, stuff is known to fall out of the sky.

To be honest, in all the many times I have seen the CADE TENCUIALA sign almost anywhere in Bucharest, never once have I looked up to see whether any mortar was raining down on me.

An acrobat would be kinda cool, though.

A visitor to Bucharest would do well to heed this sign, which is called a bulină roșie ‘red dot.’ 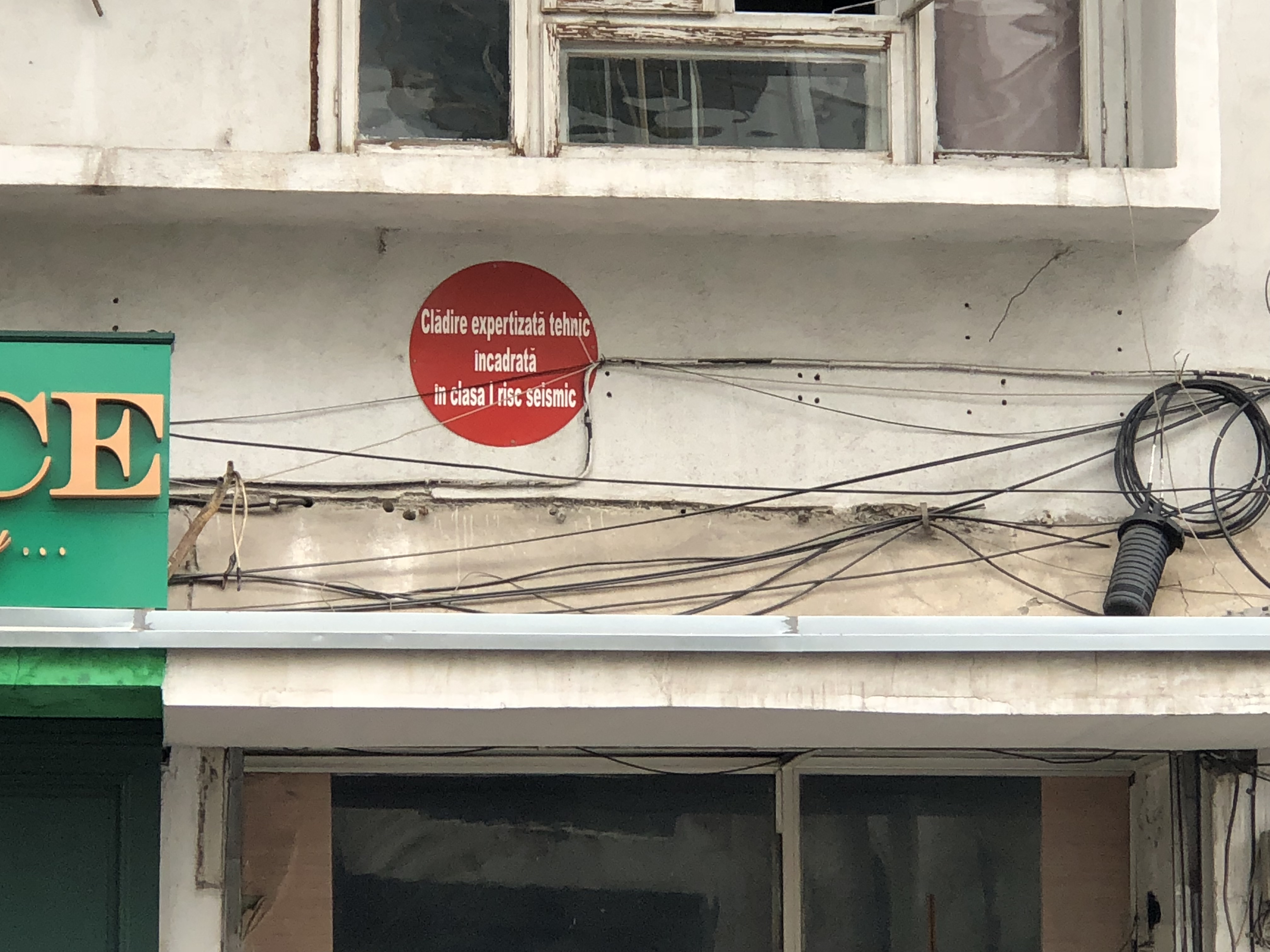 The red dot announces that the building has been officially inspected and is in the highest risk of collapse during an earthquake. 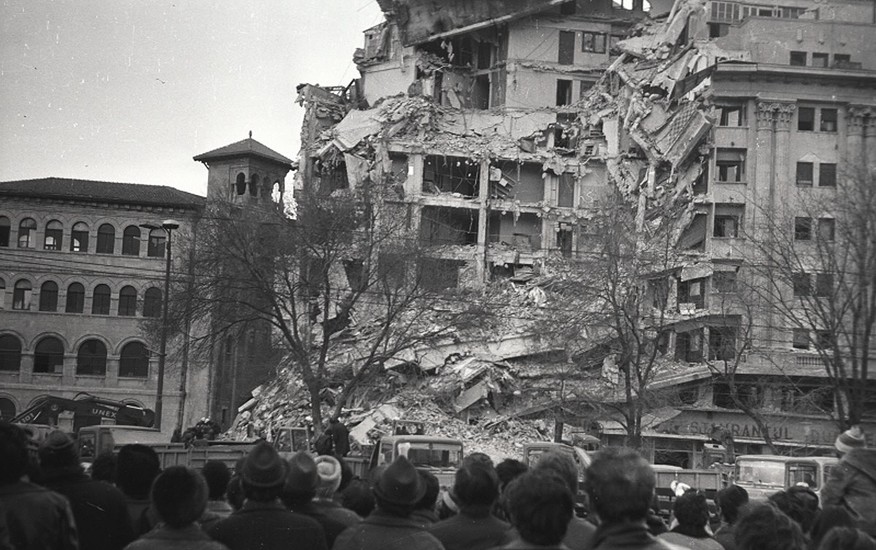 Earthquakes happen all the time in Romania, and they are under constant monitoring by the Romanian Seismic Network.

People generally expect that another Big One is in the offing for Bucharest and are happy for the occasional small ones that let off steam.